Nick French, left, who plays George Bailey, and others rehearse a scene from Stage One’s upcoming production of ‘It’s a Wonderful Life’ at the Janesville Performing Arts Center. 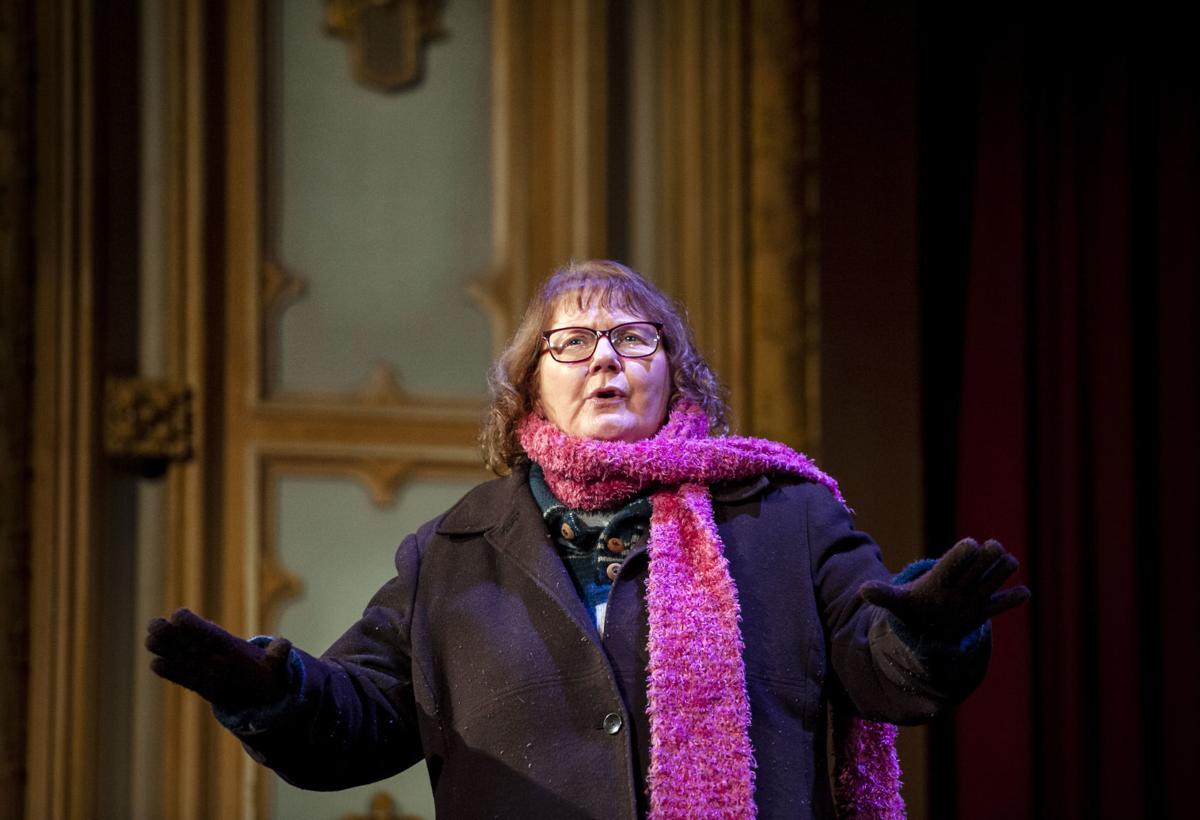 Karen Brown rehearses the role of angel Clarence Odbody for the upcoming Stage One production of ‘It’s a Wonderful Life’ at the Janesville Performing Arts Center. The show premieres Friday, Dec. 6. 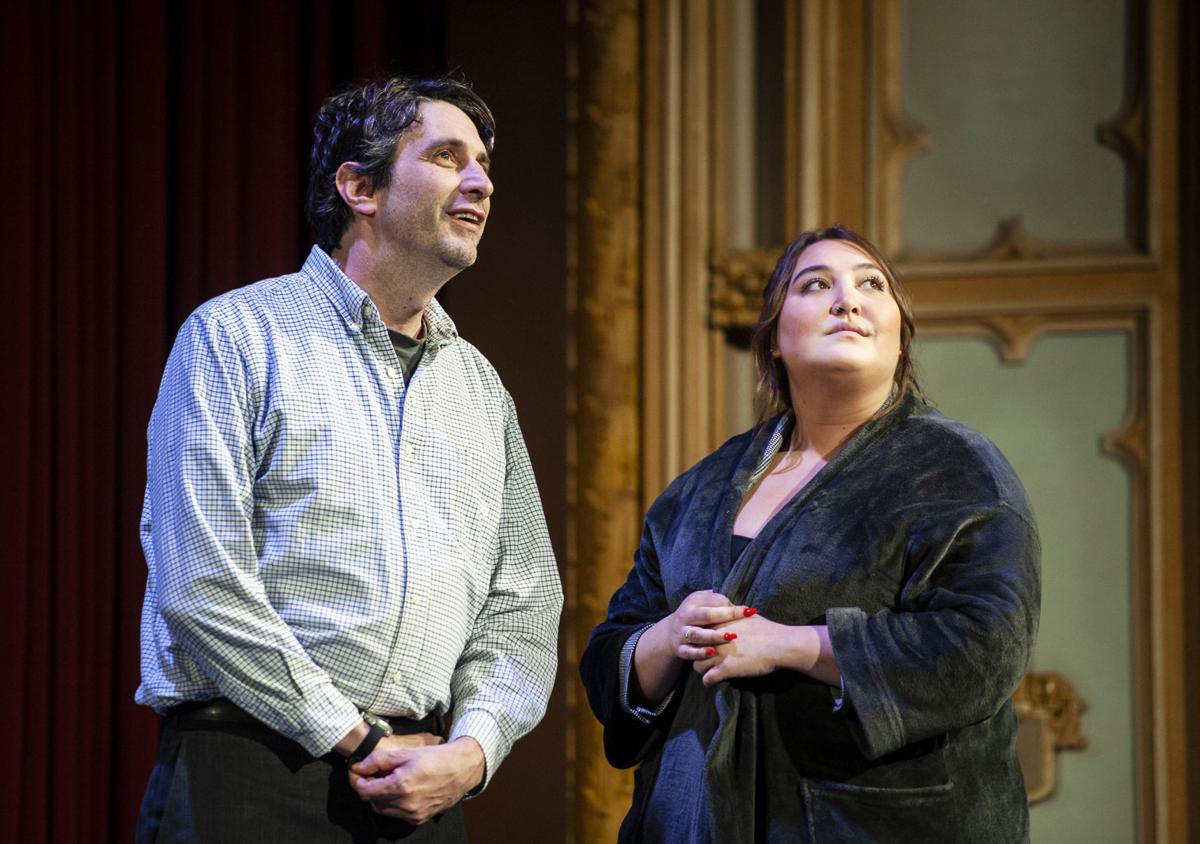 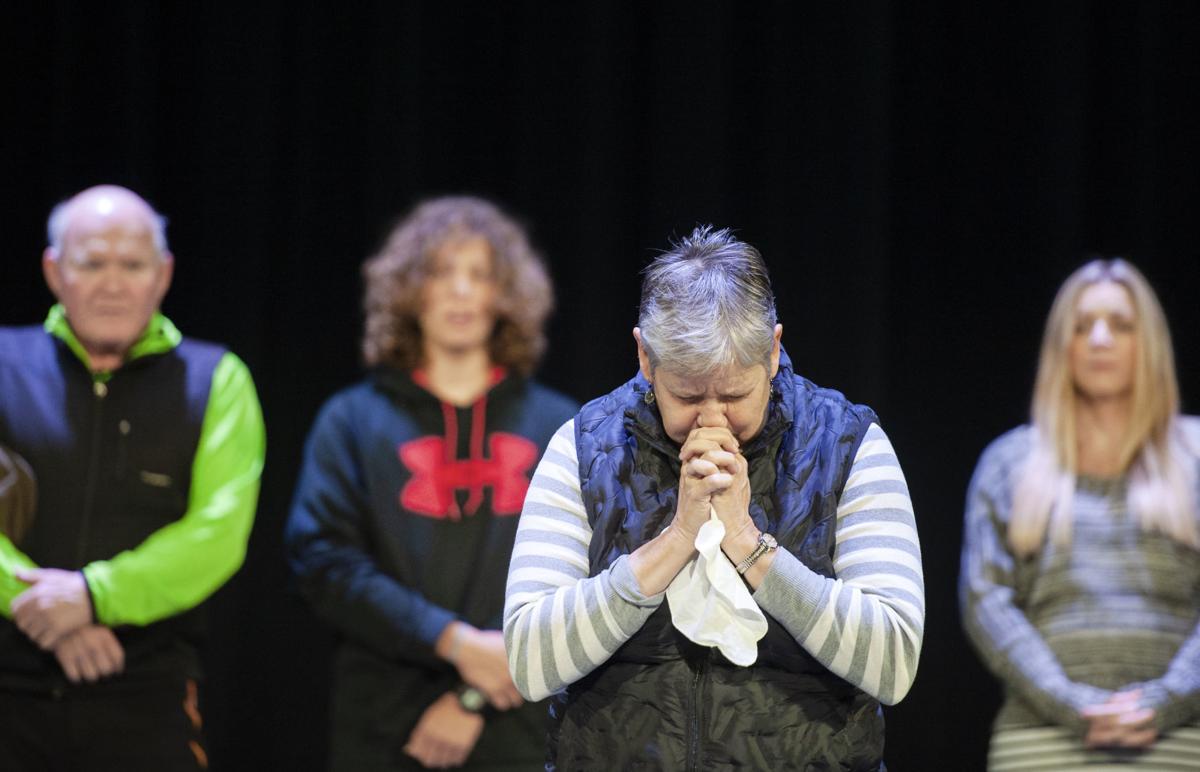 Cast members rehearse a scene from ‘It’s a Wonderful Life’ at the Janesville Performing Arts Center. 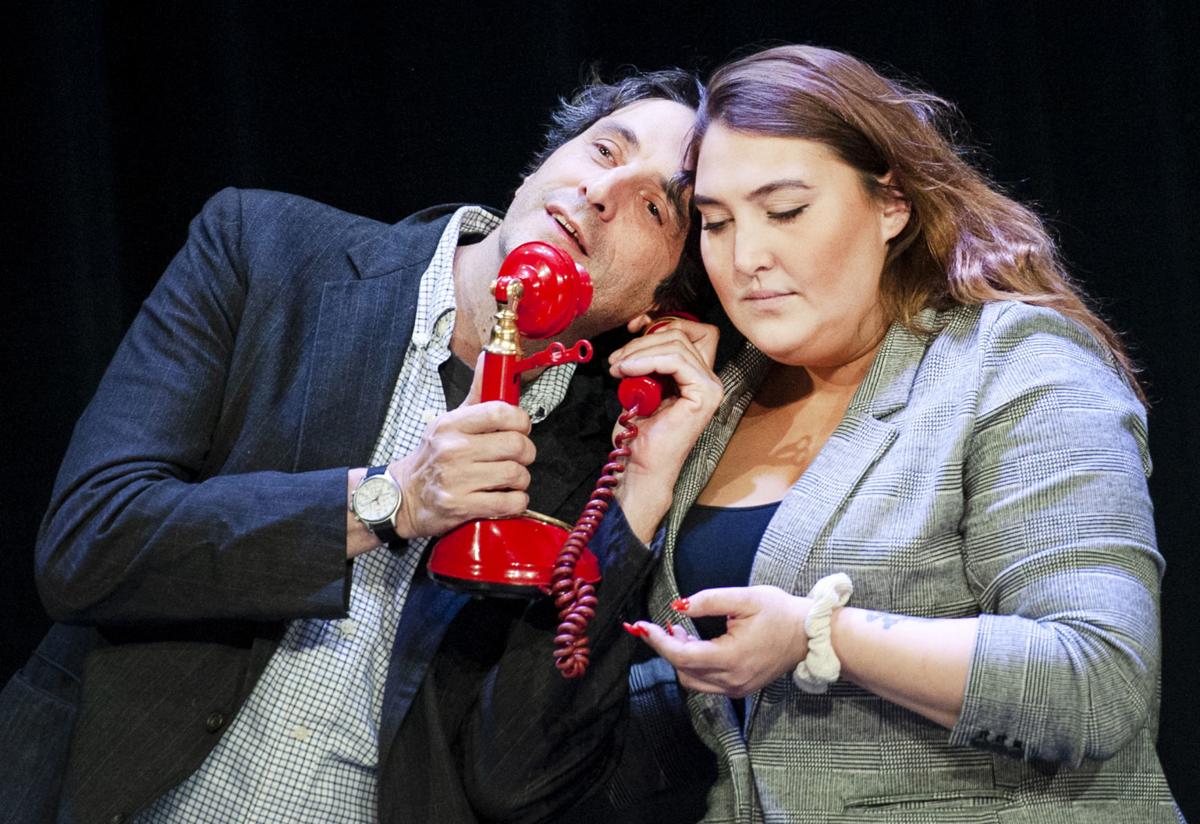 Nick French and Julia Bloom rehearse a scene as George and Mary Bailey at the Janesville Performing Arts Center.

Karen Brown made a bucket list when she turned 50. One item was to audition for a play.

She did it. Then during the production she was diagnosed with breast cancer.

It didn’t stop her. She’s been in a dozen or more productions in the succeeding 10 years, and she will play Clarence Odbody, the angel, in Stage One’s upcoming production of “It’s a Wonderful Life.”

The show, based on the original 1946 movie starring Jimmy Stewart, opens Dec. 6 at the Janesville Performing Arts Center.

Brown had auditioned for Michael Stalsberg, the show’s producer and co-director, for a previous production, “A Christmas Carol.” Stalsberg told her that with the way she talked, she could be Clarence, she said.

So Brown auditioned for the part when it came up.

“I was totally shocked when they did, in fact, place me as Clarence,” she said. “I thought it was just a shot in the dark.”

Co-director Chris Ogden said he wasn’t thinking of a female Clarence, but Brown nailed it.

“There was something about it that really screamed Clarence,” Ogden said of Brown’s audition.

“What I needed was a strong performance, but in a way that is both somehow down to earth and also kind of above it,” Ogden said.

The actors had no costumes at the time Brown was interviewed, so she still didn’t know how the production staff would handle a woman playing an angel named Clarence. But there was talk of making her gender-neutral.

The stage play closely follows the movie plot: George Bailey is a man driven to the verge of suicide because he thinks he is a failure. Then an angel intervenes, much like the ghosts intervene with Ebenezer Scrooge in Charles Dickens’ “A Christmas Carol.”

“The heart of that movie is intense,” Ogden said of “It’s a Wonderful Life.” “It’s really got a deep, well thought-out story that really has a great message.”

Stewart played Bailey in the movie. Nick French has the awkward task of following in Stewart’s footsteps locally.

“The way I see it, George Bailey is an everyman. So while Jimmy Stewart was a good fit for that role, I’m trying not to do a Jimmy Stewart imitation or caricature,” French said. “But it’s hard because I think I’ve seen the movie 40 times.”

Ogden said French’s anguish at the edge of the stage, just feet from the front row, comes across in an immediate way the movie or TV screen can’t match.

French does capture the goodhearted man in the depths of despair, Ogden said: “He’s got such a really emotional depth in this role. You do just want to love him.”

French said the movie is 2.5 hours, but the play is only 1.5 hours. Even so, the live show manages to hit all the key scenes.

“This keeps the story moving along, and I think because of that, it adds a sort of intensity in all the big moments of the story. I know I feel pretty worn out after the show.”

French said he enjoys the interaction with Brown’s character, saying she brings an air of worldly wisdom to the part.

“She kind of puts George in his place, and it’s been fun,” French said. “I like the fact that we are not even addressing that Clarence is played by a woman.”

Ogden, 22, said he has found people have strong opinions about the movie. He said he wanted to create the story on stage that would satisfy those both familiar and unfamiliar with it.

Julia Bloom, a newcomer to Janesville who has been acting most of her 24 years, plays George’s wife, Mary.

“I feel she is someone who is extremely sure of herself, and she knows what she wants. An extraordinarily independent woman for her time,” Bloom said.

Bloom said the play has a raw quality that doesn’t come through in the movie.

“I feel there’s definitely a lot more tension between George and Mary,” she said. “It’s such a good show, the way it’s written.”

What: Stage One presents Frank Capra's “It’s a Wonderful Life.”