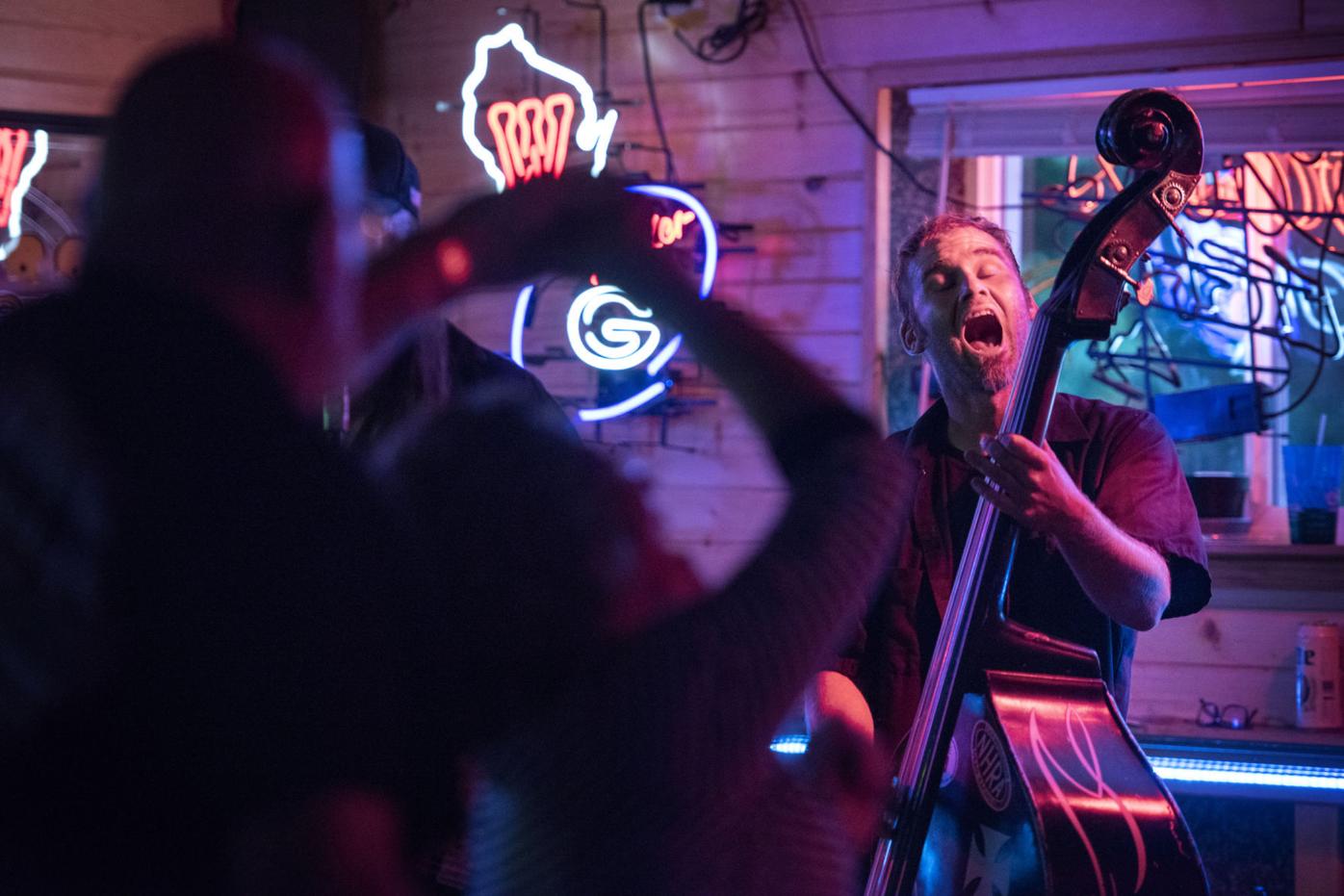 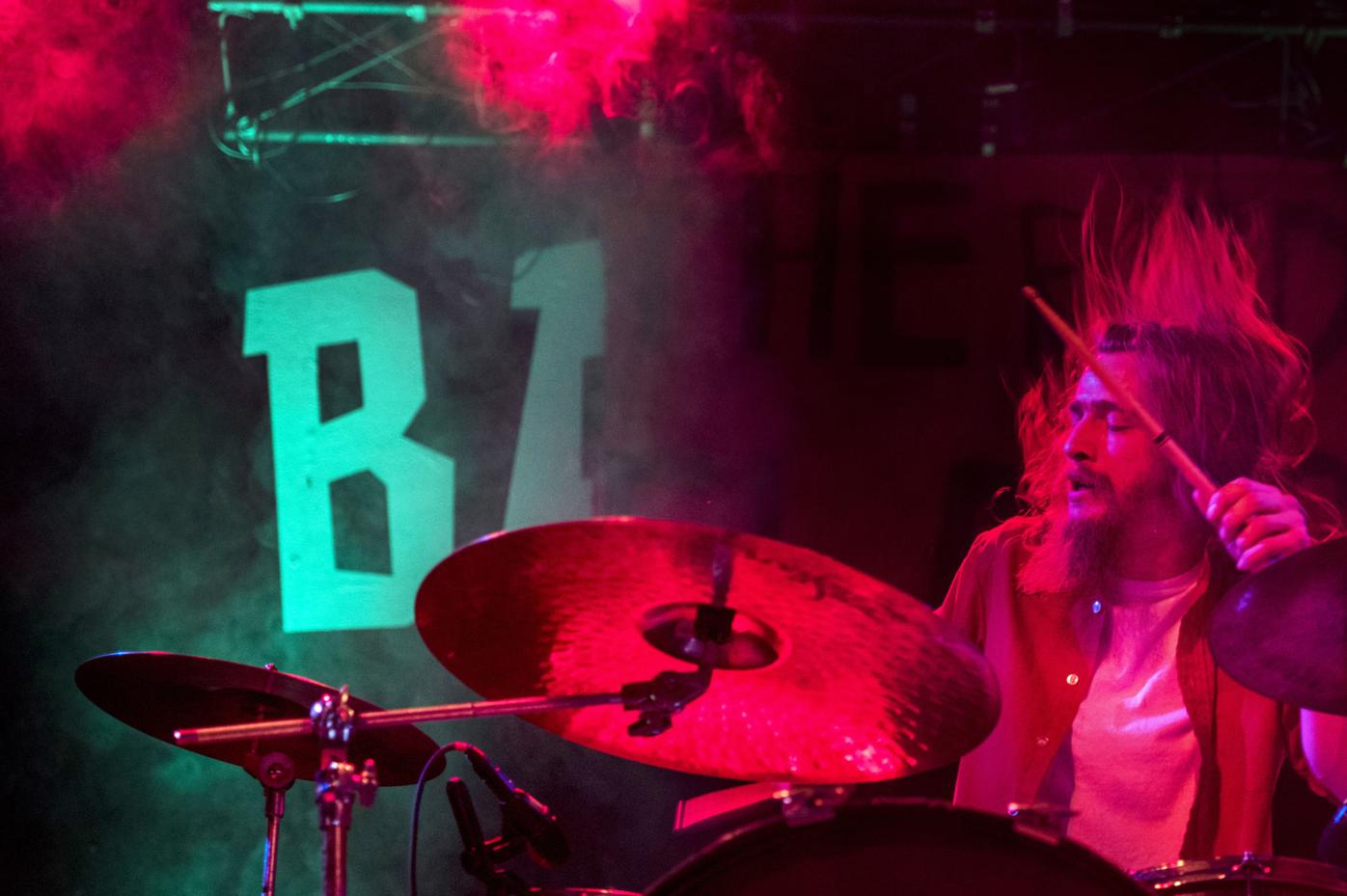 Jonah Wilson, a member of Jazzcore Friction (formerly The Red Flags, plays drums during a performance at The Back Bar in Janesville in 2018. After being closed for a full year, The Back Bar plans to reopen Friday, March 19. Live music appears to be on the uptick at many local bars and restaurants.

Jonah Wilson, a member of Jazzcore Friction (formerly The Red Flags, plays drums during a performance at The Back Bar in Janesville in 2018. After being closed for a full year, The Back Bar plans to reopen Friday, March 19. Live music appears to be on the uptick at many local bars and restaurants.

JANESVILLE—When the pandemic hit last spring, Cyndi Meyer was forced into doing something she really doesn’t like.

A musical workhorse, the solo musician and member of the Rainbow Bridge band had spent most weekends across the previous 44 years plying her craft onstage.

Suddenly, that all ground to a halt.

“I get a little crabby when I can’t play, and for three months we didn’t have a single show,” said Meyer, who admits to relying on income from performing to make ends meet. “And now, since January, the band has only been playing about twice a month because we’ve had a lack of places to play.”

But that’s starting to change, and with it Meyer’s demeanor. Her show calendar is once again filling up, and she believes the local music scene is making a solid move toward pre-pandemic status.

“Our summer is really starting to book up,” she said. “April is still really bad, but starting in May, we’re almost back to playing normal.

“I’ve been reaching out to (area bars) to see if they are starting to have music again, and many are,” she added. “Some are still waiting until closer to summer to see if restrictions get lifted a bit more because it’s hard to be at 50% (capacity), have a band and still make any money.”

A quick glance at kicks’ Night Music listings (Page 2C) across the past two weeks has shown a boost in the number of local shows being booked. That’s good news not only for musicians, but also for entertainment-starved venues that count on live music to drive crowds—and revenue.

For a case study of how brutal the last year has been for such businesses, one need look no further than Bob Kerman.

The owner of Janesville’s Back Bar, 1901 Beloit Ave., shut down his live music venue on March 13, 2020, because of regulations brought on by the pandemic. Three months later, while some bars reopened with limited capacities, Kerman stayed closed in an effort to lessen the spread.

While Kerman’s efforts might have aided public safety, they didn’t alleviate all of his troubles. Closed doors meant no concerts, and no concerts meant no income. That became a serious issue as operational costs continued to mount.

To compound problems, distributors refused return of the bar’s non-alcohol-related inventory, mildew developed in a cooler that had been turned off to cut costs and the momentous task of rebooking the bar’s extensive entertainment calendar remained.

“I was in the hospital for 12 days in a tiny room where a nurse was only allowed in once every four hours,” he said. “I was alone most of the time, and I had to beg them to clean the room. I had a high fever and was hallucinating, so they put me on high-output oxygen and started me on a trial version of plasma from Mayo Clinic. I started to feel better after a couple of days, but I still had six weeks of recovery at home on an oxygen machine.”

Now, eight months later, things are finally starting to look up. The Back Bar is set to reopen Friday with a concert featuring Soulfly guitarist Marc Rizzo along with four local bands.

“The feedback has been good,” Kerman said. “I’ve been telling people to get advance tickets because there will be limited capacity, and tickets are flying off the shelves.”

Along with booking a series of upcoming shows with national acts such Tantric, Flaw and The Lonely Ones (formerly Bobaflex), Kerman is further enticing customers with admission discounts available online—and only until the bar reopens at 6 p.m. Friday, March 19.

Over at Hammy’s Roadside Bar, 2131 Center Ave., Janesville, live music has remained a part of the scene since the three-month shutdown ended last June.

During uncertain times, bar owner Suzanne Hamilton has found taking a flexible approach has helped her maintain good relationships with the bands she hires.

“I always book my bands a year in advance, but if someone called and said, ‘We don’t feel comfortable playing right now’ or maybe ‘I’ve got a mom that is older or a family member I need to care for and can’t play,’ I’d say, ‘Perfect.’ Or they would say, ‘Suzanne, keep us down for two months from now because things might change.’ I’d say, ‘Perfect.’

“When a band canceled on me, I just let it go. I didn’t venture out to get another band. That just became a day off, and we’d just play pool instead.”

“Right now, they’re hungry because a lot of them haven’t played for months,” she said. “Now they’re calling me and saying they want to play.”

It shouldn’t surprise anyone that, along with fans, bands are clamoring to get out and perform. In addition to the need for income, months of “sheltering in place” followed by the annual hibernation period we call winter has everyone in need of fresh air and frolic.

Lutton’s band played mostly outdoor shows in 2020 and then decided to go on hiatus rather than play indoors when the weather got frosty. His hope is that this year, by the time winter returns, COVID-19 numbers drop to levels low enough that lockdowns are a thing of the past.

“I know a few bar owners, and while we don’t talk about their finances, I know it would be devastating if they couldn’t get weekend gatherings at their places this summer,” he said. “So I think there will be more opportunities to perform.

“We probably won’t see the same number (of shows) as in 2019, but we’re definitely seeing local venues stress that they’re not about to go through the same kind of summer they did last year.”