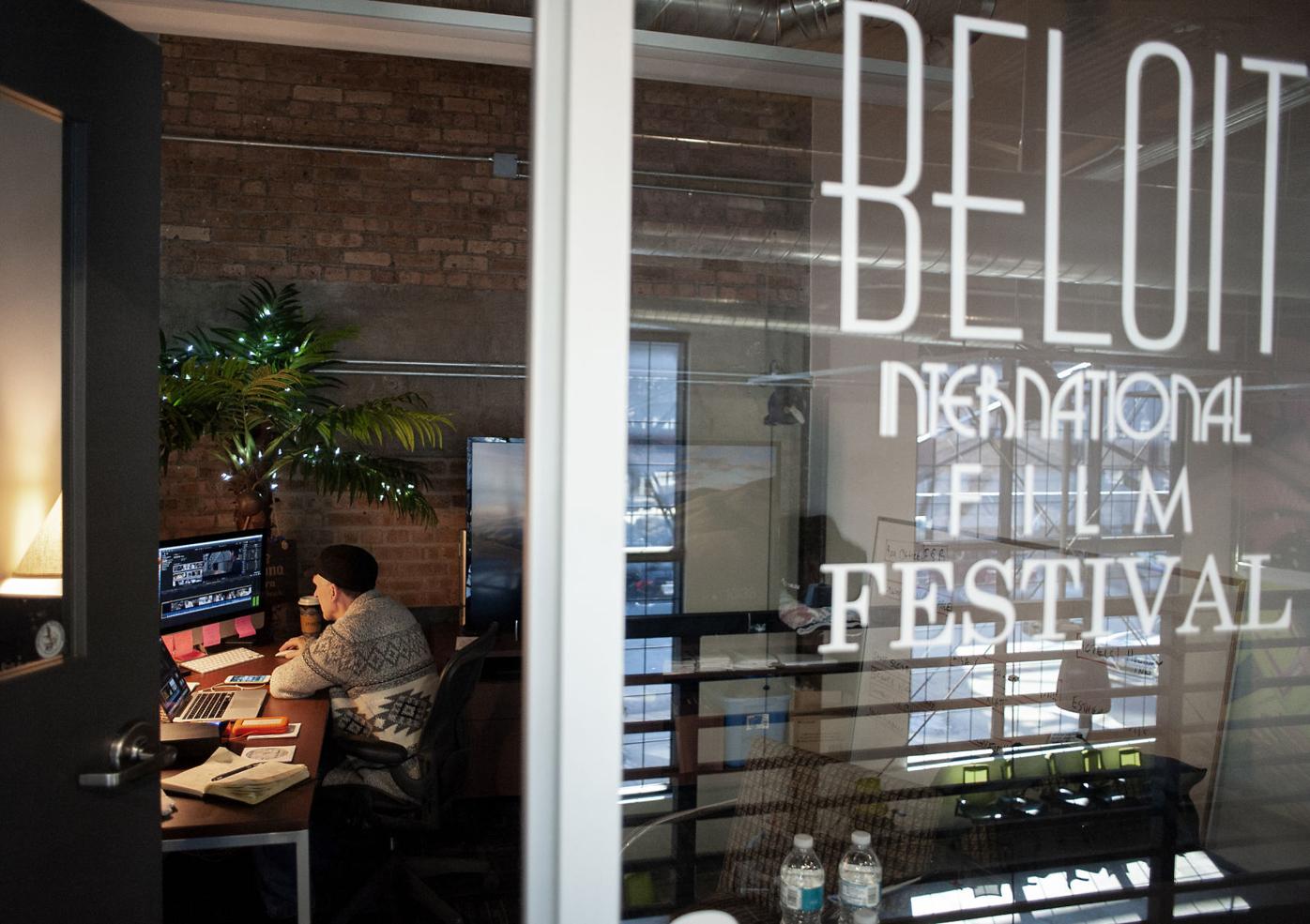 Beloit International Film Festival Executive Director Greg Gerard works in his office in the Irontek Building in Beloit. The annual film festival, which begins Friday, Feb. 19, and runs through Sunday, Feb. 28, will be held in a virtual format this year due to the COVID-19 pandemic. 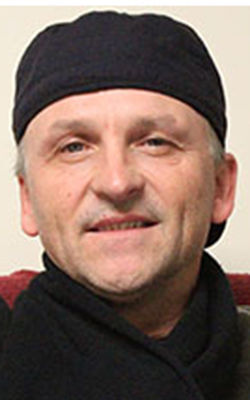 Beloit International Film Festival Executive Director Greg Gerard works in his office in the Irontek Building in Beloit. The annual film festival, which begins Friday, Feb. 19, and runs through Sunday, Feb. 28, will be held in a virtual format this year due to the COVID-19 pandemic.

BELOIT—How irritating is it to walk into a theater and find all of the best seats taken? You know, the ones at the center of the middle rows that offer the best sight lines, peripherals and acoustics?

Well, if you’re planning to take part in the 16th annual Beloit International Film Festival, that won’t be a problem.

Due to safety guidelines associated with the COVID-19 pandemic (aren’t we all a little tired of that tagline by now?), BIFF 2021 will be presented in a mostly virtual format.

Aside from a drive-up reveal party held earlier this month and six free drive-in movies scheduled during the 10-day event, all films, workshops and question-and- answer sessions will be made available online. That means fans will determine not only titles, times and places to watch but also at what volumes and room temperatures and which preferred snack food will accompany each flick.

And think about it ... when was the last time a theater offered to pause the film because you drank too much soda during the previews?

Though the decision to forego live screenings this year wasn’t what you’d call voluntary, BIFF Executive Director Greg Gerard said he sees potential in continuing at least some level of streaming even after COVID-19 breaks.

At least one key demographic seems to agree.

“We ran a survey and asked fans to tell us how they felt about a virtual festival versus a hybrid or live event, and a lot of our senior folks commented they thought this was a wonderful option ... especially during icy, cold weather,” he said. “And because retirees have always been a large part of our fan base, I think there will be value in having stuff like this available for those folks moving forward.”

In going the streaming route, Gerard said it seemed natural to offer video-on-demand as opposed to scheduled programming.

“You’re going to have people who are going to have tech issues, and then our help lines would light up like crazy,” he said. “We know a lot of our fan base is in that 65 to 85 category and, not to throw shade at them, but technology can be a conundrum.

“We feel this gives everybody a chance to watch films when it is convenient for them and also gives them time to make sure they are up and running and ready to go rather than tune in late because of tech issues.”

Gerard noted that, along with its regular help line, BIFF has installed a chat window on the home page at BeloitFilmFest.org to help participants solve any problems.

Once viewers gain access, they will be kept busy. Screeners have whittled the original field of 583 submissions to a little more than 100 in the categories of narrative features and shorts, documentary features and shorts and music videos.

“That’s a lot of rejection slips we have to send out, and a lot of film footage to wade through,” Gerard said.

Filmgoers have the option of viewing individual films for $10 each or purchasing festival passes for access to all of them. Passes are $100 for Beloit Film Society members and $120 for nonmembers.

In addition to a plethora of films from around the globe, BIFF fans will have access to a series of workshops, special presentations and filmmaker Q&As that will be available for free.

“Seeing people in the streets meeting up at the coffee shops, taverns and restaurants to mingle with filmmakers, especially during the doldrums of winter, has always been a high point, and that will be dialed down quite a bit this year,” Gerard said. “But I do like the fact that we will probably have more filmmaker Q&As because it’s much easier to gain access to everyone (virtually).”

The drive-in films, planned for Friday, Saturday and Sunday nights each weekend of the festival in a parking lot on the Ironworks campus, also will be free and open to the public.

But do people really want to sit outside in their cars in the middle of winter to watch a film?

“So far, every time I’ve mentioned it, people are fascinated,” Gerard said. “We did one in early December with winter temperatures with a few stray flurries, and we had a parking lot full of cars. That was kind of what cemented for me that we could make this work. We did a little studying of other festivals held in colder climates that are doing it, too.”

With so much of this year’s festival being held remotely, downtown Beloit businesses that normally benefit from the increase in tourism dollars will feel the effects. Gerard is optimistic that simply finding a way to continue the event in the face of adversity will benefit all involved in the long run.

“Obviously, agencies such as Visit Beloit and the Downtown Beloit Association are anxious to have foot traffic back again,” he said. “But I don’t know that having a virtual component or a hybrid program next year would hurt foot traffic in any significant way. I think being online and giving people a taste of what Beloit is all about is a great drawing card.”

Despite the extra effort this year’s festival has required, Gerard is just happy to see BIFF—and Beloit—continue to thrive.

Some others haven’t been so lucky, he said.

“I think trying to find a sense of community in the midst of all of this has been the biggest hurdle to cross,” he said. “

I’m just pleased we’ve been able to rally and have something for our fan base, because some festivals have opted out and decided it was too costly or complicated to accomplish during this.”

BIFF officials are seeking volunteers to help screen submitted films for the 2022 festival. Screening is a weekly commitment that tends to run from March to Nov. 1.

Where: This year's festival will be a virtual experience due to gathering restrictions associated with the pandemic. Fans can select and stream movies by visiting BeloitFilmFest.org.

Survival guide: For information on how to gain access to films being streamed as part of BIFF this year, visit BeloitFilmFest.org/survival-guide.

Drive-in option: In addition to those available for streaming, BIFF will offer a series of six free, family friendly features as part of a special "drive-in" program this year. All begin at 6:30 p.m. on their respective nights and will be screened in the Ironworks campus parking lot on Ironworks drive at the north end of Third Street in Beloit.

Attendees are encouraged to arrive at least 15 minutes before showtime to ensure parking. Turn car radios to 94.7 FM for sound. Films being shown include:

Special programs: In addition to movies, BIFF will again host a series of virtual workshops and question-and-answer sessions film industry insiders. These include:

Q&A sessions: For a schedule of question-and-answer sessions being planned on Zoom for specific films, visit BeloitFilmFest.org/film-index-2021.

Pitch in: BIFF is taking online donations at BeloitFilmFest.org/donate. Interested parties also can text "BUILDUP" to 44-321 to help out.

More than 100 films of different styles will be presented during the 16th annual Beloit International Film Festival (BIFF) when it runs from Friday, Feb. 19, through Sunday, Feb. 28. Here are a few specific films that are certain to create buzz with movie fans:

"A Shot Through the Wall": A young Chinese-American cop unravels after accidentally shooting an innocent African-American man through a wall. Narrative feature directed by Aimee Long in 2020. Origin: USA. Length: 88 minutes. Rating: R.

"Cargo--Der Transport": In 2015, a convoy of human smugglers lets 71 refugees packed in a truck suffocate to death after the driver's boss pressured him to finish the transport at any cost. Narrative short directed by Christina Tournatzesr in 2019. Origin: Germany. Length: 15 minutes. Rating: PG-13.

"Gossamer Folds": As his parents' marriage unravels, a 9-year-old boy finds solace in the unlikely friendships of his new next door neighbors: a retired college professor and his transgender daughter. Narrative feature directed by Lisa Donato in 2020. Origin: USA. Length: 95 minutes. Rating: PG.

"More Than Miyagi": Pat Morita, the Oscar-nominated actor best known for his role as Mr. Miyagi in "The Karate Kid," left behind a painfully revealing autobiographical record of his brief time on Earth. Documentary feature directed by Kevin Derek in 2020. Origin: USA. Length: 92 minutes. Rating: PG-13.

"The Old Man Movie": Old Man's grandkids visit for the summer and end up setting loose his prized yet abused cow. Now they have 24 hours to find her before her unmilked udder expodes. Narrative feature directed by Oskar Lehemaa and Mikk Magi in 2019. Origin: Estonia. Length: 88 minutes. Rating: R.

"Out of Stock": In 1973, "The Tonight Show" host Johnny Carson made a joke about a toilet paper shortage. The next day, stores nationwide were sold out. Narrative short directed by Bryan Taira in 2020. Origin: USA. Length: 18 minutes. Rating: PG-13.

"Ringolevio": A young woman who travels north to meet her girlfriend's family finds herself on the outside looking in, struggling to find common ground while trying desperately to make a good impression. Narrative feature directed by Kristin Peterson Kaszubowski in 2020. Origin: USA. Length: 80 minutes. Rating: R.

"Royalty Free: The Music of Kevin McLeod": The composer at Incompetech.com releases all of his music for free, unwittingly becoming one of the most-heard living composers in the world. Documentary feature directed by Ryan Camarda in 2019. Origin: USA. Length: 91 minutes. Rating: PG-13.

"Small Town Wisconsin": When a man learns he is losing shared custody of his son, and that his son will be moving far away, he plans a special weekend to remember him by--a trip to the big city of Milwaukee. Narrative feature directed by Niels Mueller in 2020. Origin: USA. Length: 105 minutes. Rating: PG.

"Tom of Your Life": A child born in a rural hospital begins inexplicably aging, growing and evolving four years every hour. A rebellious nurse smuggles him out on the road to Chicago to experience what life is all about on the one day he has to live it. Narrative feature directed by Jer Sklar in 2020. Origin: USA. Length: 93 minutes. Rating: R.