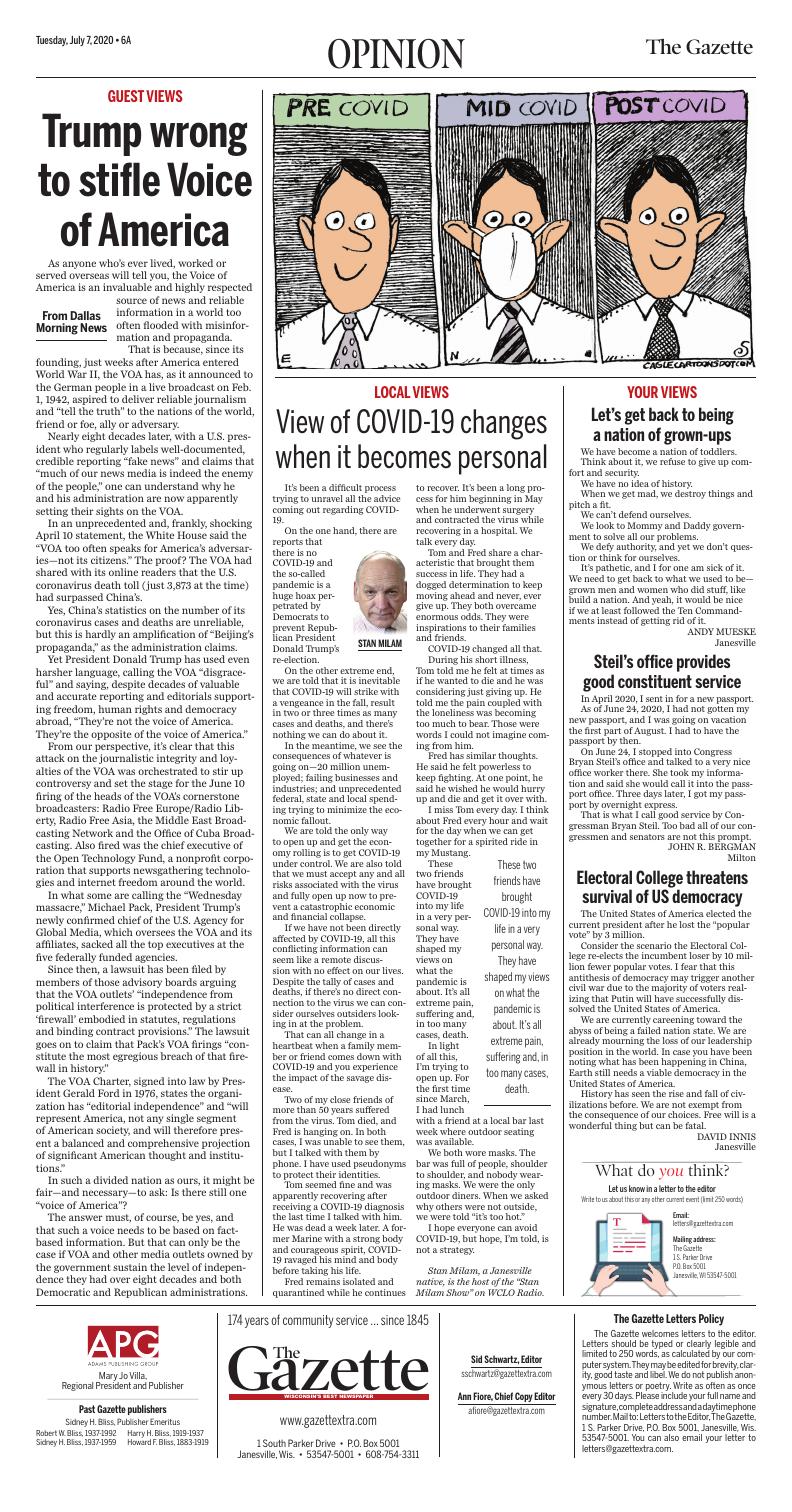 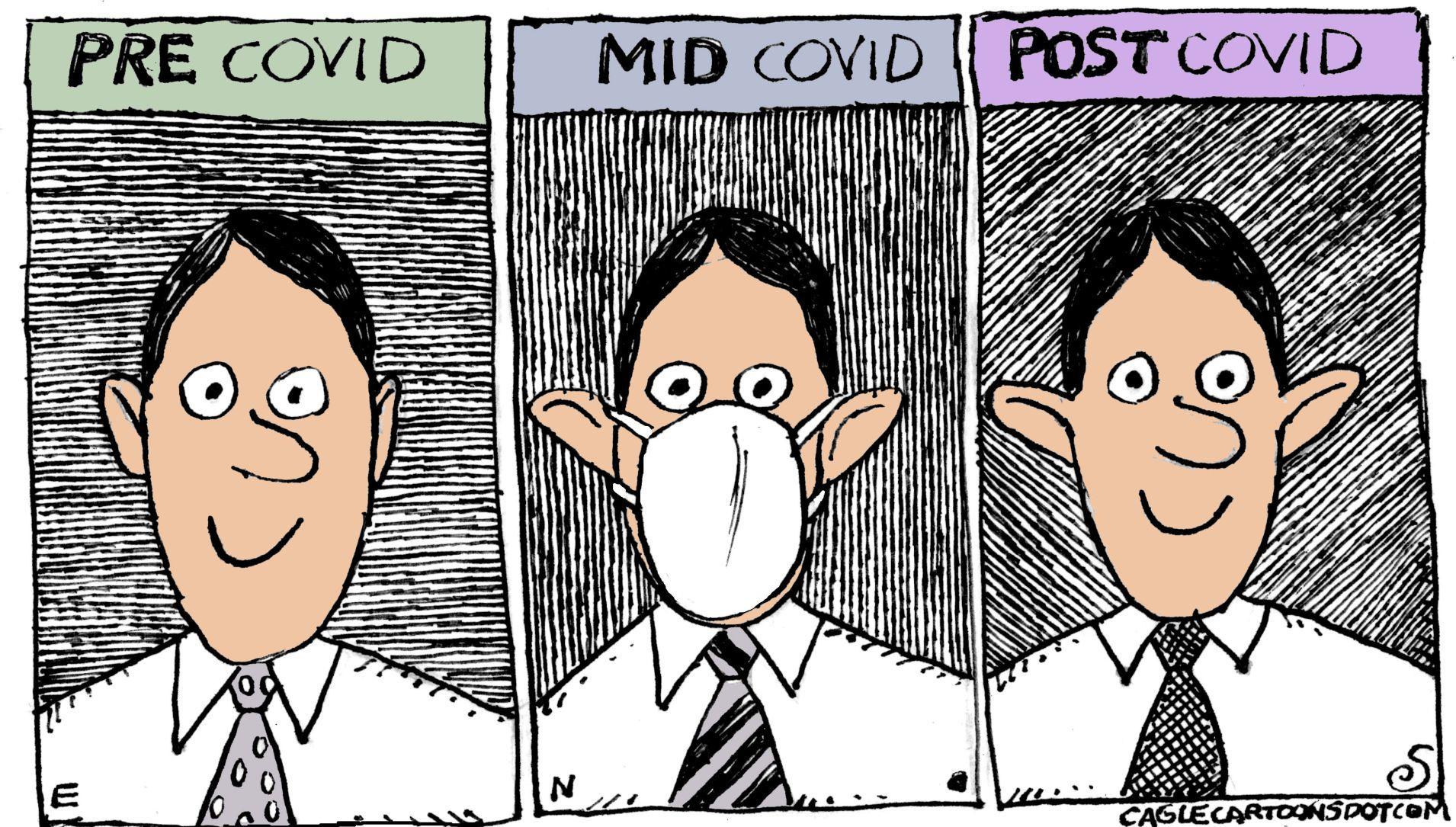 It’s been a difficult process trying to unravel all the advice coming out regarding COVID-19.

On the one hand, there are reports that there is no COVID-19 and the so-called pandemic is a huge hoax perpetrated by Democrats to prevent Republican President Donald Trump’s re-election.

On the other extreme end, we are told that it is inevitable that COVID-19 will strike with a vengeance in the fall, result in two or three times as many cases and deaths, and there’s nothing we can do about it.

In the meantime, we see the consequences of whatever is going on—20 million unemployed; failing businesses and industries; and unprecedented federal, state and local spending trying to minimize the economic fallout.

We are told the only way to open up and get the economy rolling is to get COVID-19 under control. We are also told that we must accept any and all risks associated with the virus and fully open up now to prevent a catastrophic economic and financial collapse.

If we have not been directly affected by COVID-19, all this conflicting information can seem like a remote discussion with no effect on our lives. Despite the tally of cases and deaths, if there’s no direct connection to the virus we can consider ourselves outsiders looking in at the problem.

That can all change in a heartbeat when a family member or friend comes down with COVID-19 and you experience the impact of the savage disease.

Two of my close friends of more than 50 years suffered from the virus. Tom died, and Fred is hanging on. In both cases, I was unable to see them, but I talked with them by phone. I have used pseudonyms to protect their identities.

Tom seemed fine and was apparently recovering after receiving a COVID-19 diagnosis the last time I talked with him. He was dead a week later. A former Marine with a strong body and courageous spirit, COVID-19 ravaged his mind and body before taking his life.

Fred remains isolated and quarantined while he continues to recover. It’s been a long process for him beginning in May when he underwent surgery and contracted the virus while recovering in a hospital. We talk every day.

Tom and Fred share a characteristic that brought them success in life. They had a dogged determination to keep moving ahead and never, ever give up. They both overcame enormous odds. They were inspirations to their families and friends.

COVID-19 changed all that.

During his short illness, Tom told me he felt at times as if he wanted to die and he was considering just giving up. He told me the pain coupled with the loneliness was becoming too much to bear. Those were words I could not imagine coming from him.

Fred has similar thoughts. He said he felt powerless to keep fighting. At one point, he said he wished he would hurry up and die and get it over with.

I miss Tom every day. I think about Fred every hour and wait for the day when we can get together for a spirited ride in my Mustang.

These two friends have brought COVID-19 into my life in a very personal way. They have shaped my views on what the pandemic is about. It’s all extreme pain, suffering and, in too many cases, death.

In light of all this, I’m trying to open up. For the first time since March, I had lunch with a friend at a local bar last week where outdoor seating was available.

We both wore masks. The bar was full of people, shoulder to shoulder, and nobody wearing masks. We were the only outdoor diners. When we asked why others were not outside, we were told “it’s too hot.”

I hope everyone can avoid COVID-19, but hope, I’m told, is not a strategy.

As anyone who’s ever lived, worked or served overseas will tell you, the Voice of America is an invaluable and highly respected source of news and reliable information in a world too often flooded with misinformation and propaganda.

That is because, since its founding, just weeks after America entered World War II, the VOA has, as it announced to the German people in a live broadcast on Feb. 1, 1942, aspired to deliver reliable journalism and “tell the truth” to the nations of the world, friend or foe, ally or adversary.

In that first broadcast, after a stirring rendition of “The Battle Hymn of the Republic,” the esteemed journalist and VOA announcer William Harlan Hale spoke directly to the German people, relaying this simple yet profound message:

Nearly eight decades later, with a U.S. president who regularly labels well-documented, credible reporting “fake news” and claims that “much of our news media is indeed the enemy of the people,” one can understand why he and his administration are now apparently setting their sights on the VOA.

In an unprecedented and, frankly, shocking April 10 statement, the White House said the “VOA too often speaks for America’s adversaries—not its citizens.” The proof? The VOA had shared with its online readers that the U.S. coronavirus death toll (just 3,873 at the time) had surpassed China’s.

Yes, China’s statistics on the number of its coronavirus cases and deaths are unreliable, but this is hardly an amplification of “Beijing’s propaganda,” as the administration claims.

Strangely, the White House also claimed that “much of the U.S. media takes its lead from China.” If that’s true, we hadn’t noticed it from our newsroom here in Dallas or in the stories filed by any of our reporters around the world.

In fact, we agree with Joel Simon, the executive director of the Committee to Protect Journalists, who recently said, “It is outrageous that the White House is attacking Voice of America, which has a tradition of reporting stories that challenge the narratives of authoritarian regimes around the world.”

Yet President Donald Trump has used even harsher language, calling the VOA “disgraceful” and saying, despite decades of valuable and accurate reporting and editorials supporting freedom, human rights and democracy abroad, “They’re not the voice of America. They’re the opposite of the voice of America.”

From our perspective, it’s clear that this attack on the journalistic integrity and loyalties of the VOA was orchestrated to stir up controversy and set the stage for the June 10 firing of the heads of the VOA’s cornerstone broadcasters: Radio Free Europe/Radio Liberty, Radio Free Asia, the Middle East Broadcasting Network and the Office of Cuba Broadcasting. Also fired was the chief executive of the Open Technology Fund, a nonprofit corporation that supports newsgathering technologies and internet freedom around the world.

In what some are calling the “Wednesday massacre,” Michael Pack, President Trump’s newly confirmed chief of the U.S. Agency for Global Media, which oversees the VOA and its affiliates, sacked all the top executives at the five federally funded agencies and disbanded their separate bipartisan advisory boards, replacing them with Trump administration political appointees.

Since then, a lawsuit has been filed by members of those advisory boards arguing that the VOA outlets’ “independence from political interference is protected by a strict ‘firewall’ embodied in statutes, regulations and binding contract provisions.” The lawsuit goes on to claim that Pack’s VOA firings “constitute the most egregious breach of that firewall in history.”

Whether or not that argument will hold up in court is anyone’s guess. Given the high court’s recent decision empowering the president to fire the head of the Consumer Financial Protection Bureau (based on the sound premise that, in our system of government, every facet of the government needs to be accountable to the people), we doubt that, in the end, the courts will declare these firings unconstitutional.

In any case, Pack, a conservative filmmaker who has collaborated with former Breitbart News chairman and Trump strategist Stephen Bannon on several projects, was duly confirmed by the U.S. Senate, and it may be difficult to prove that political interference was the motivation behind the firings.

What’s clear, however, and worth lamenting, is that the Voice of America, a storied and respected U.S. institution that has long promoted liberty, democracy and accountability around the world, is falling victim to the highly polarized, shortsighted and uncompromising nature of today’s politics.

The VOA Charter, signed into law by President Gerald Ford in 1976, states the organization has “editorial independence” and “will represent America, not any single segment of American society, and will therefore present a balanced and comprehensive projection of significant American thought and institutions.”

In such a divided nation as ours, it might be fair—and necessary—to ask: Is there still one “voice of America”?

The answer must, of course, be yes, and that such a voice needs to be based on fact-based information. But that can only be the case if VOA and other media outlets owned by the government sustain the level of independence they had over eight decades and both Democratic and Republican administrations.

Let’s get back to being a nation of grown-ups

We have become a nation of toddlers.

Think about it, we refuse to give up comfort and security.

We have no idea of history.

When we get mad, we destroy things and pitch a fit.

We can’t defend ourselves.

We look to Mommy and Daddy government to solve all our problems.

We defy authority, and yet we don’t question or think for ourselves.

It’s pathetic, and I for one am sick of it. We need to get back to what we used to be—grown men and women who did stuff, like build a nation. And yeah, it would be nice if we at least followed the Ten Commandments instead of getting rid of it.

As of June 24, 2020, I had not gotten my new passport, and I was going on vacation the first part of August. I had to have the passport by then.

On June 24, I stopped into Congress Bryan Steil’s office and talked to a very nice office worker there. She took my information and said she would call it into the passport office. Three days later, I got my passport by overnight express.

That is what I call good service by Congressman Bryan Steil. Too bad all of our congressmen and senators are not this prompt.

The United States of America elected the current president after he lost the “popular vote” by 3 million.

Consider the scenario the Electoral College re-elects the incumbent loser by 10 million fewer popular votes. I fear that this antithesis of democracy may trigger another civil war due to the majority of voters realizing that Putin will have successfully dissolved the United States of America.

We are currently careening toward the abyss of being a failed nation state. We are already mourning the loss of our leadership position in the world. In case you have been noting what has been happening in China, Earth still needs a viable democracy in the United States of America.

History has seen the rise and fall of civilizations before. We are not exempt from the consequence of our choices. Free will is a wonderful thing but can be fatal. 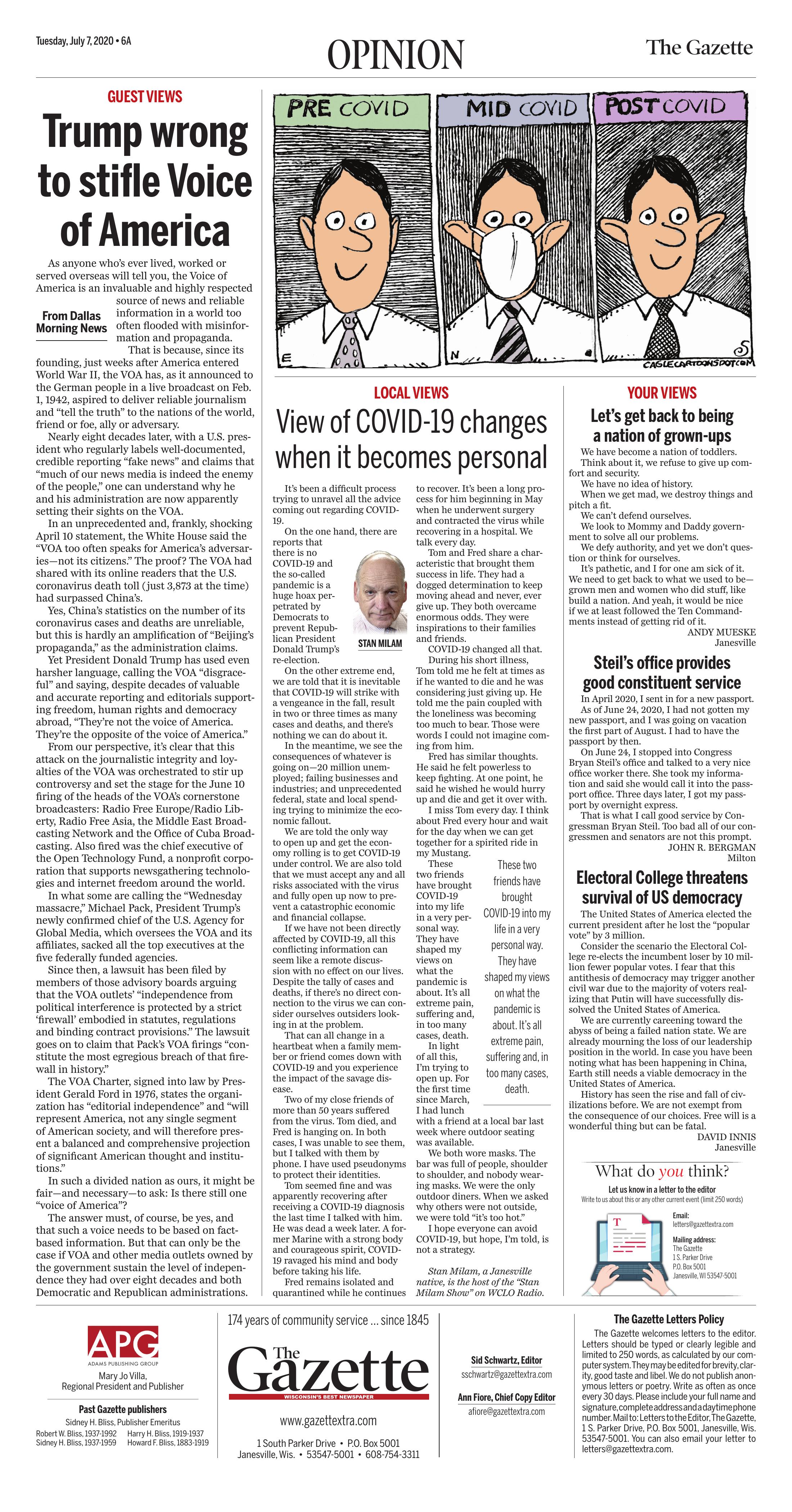