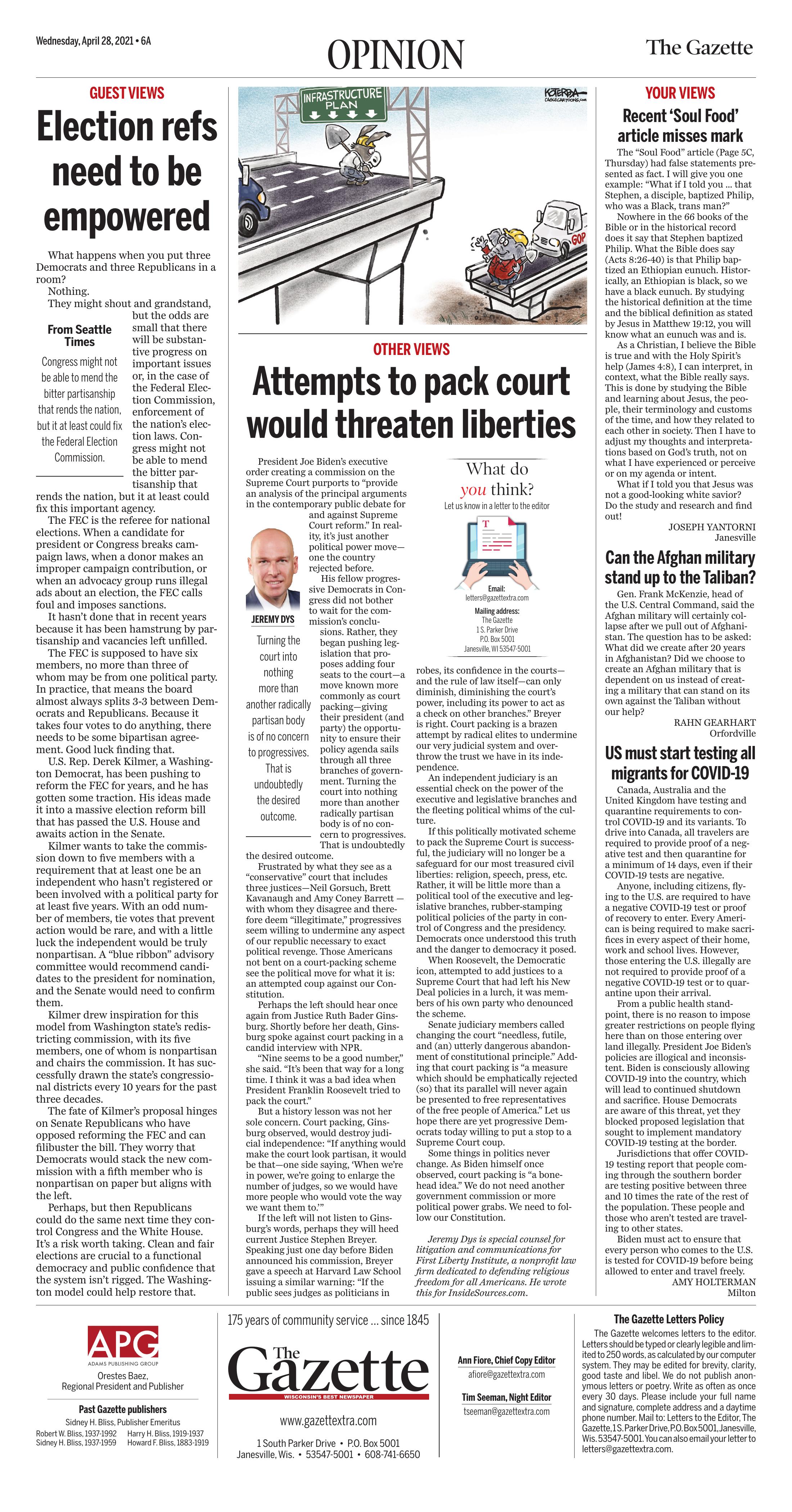 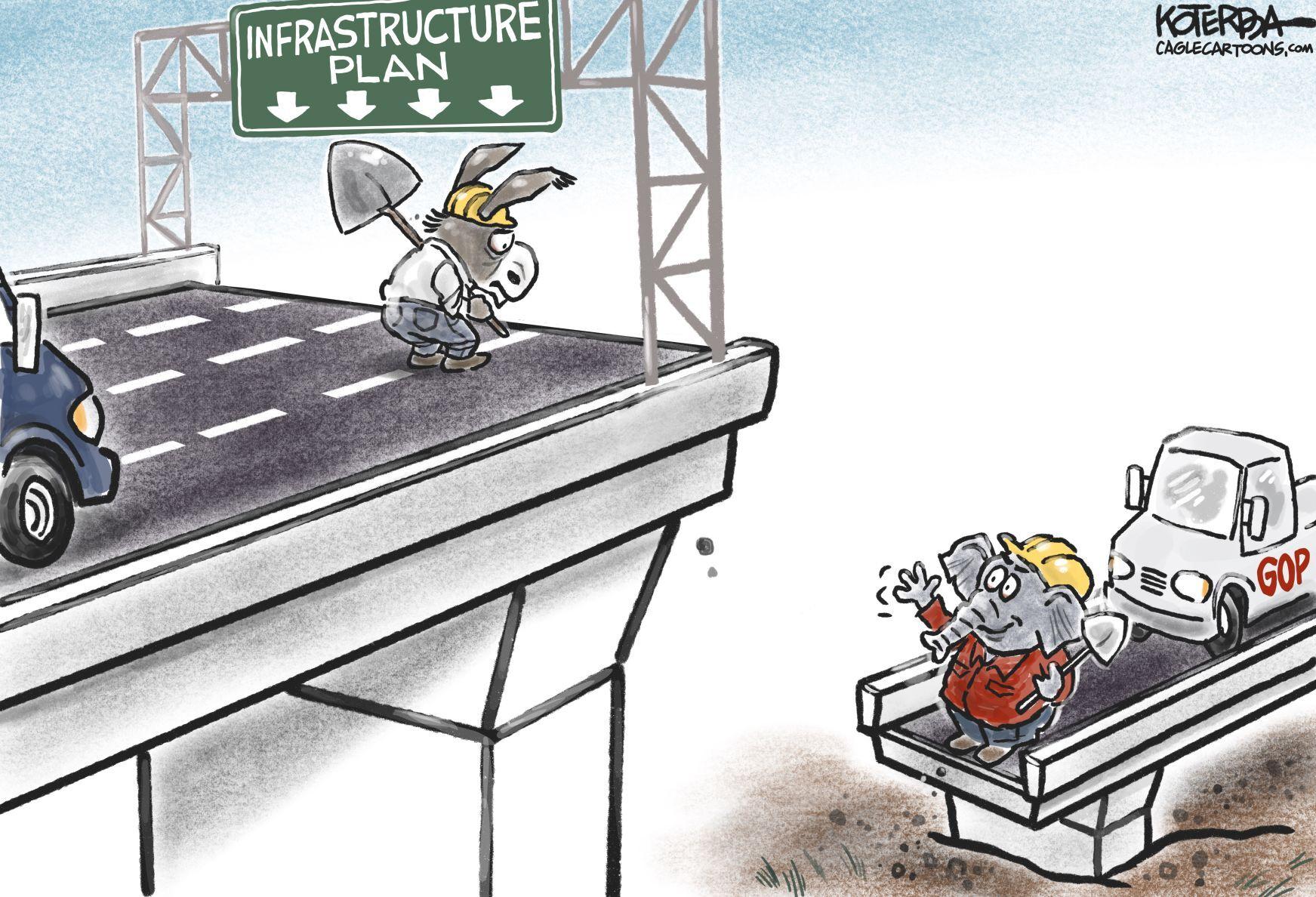 President Joe Biden’s executive order creating a commission on the Supreme Court purports to “provide an analysis of the principal arguments in the contemporary public debate for and against Supreme Court reform.” In reality, it’s just another political power move—one the country rejected before.

His fellow progressive Democrats in Congress did not bother to wait for the commission’s conclusions. Rather, they began pushing legislation that proposes adding four seats to the court—a move known more commonly as court packing—giving their president (and party) the opportunity to ensure their policy agenda sails through all three branches of government. Turning the court into nothing more than another radically partisan body is of no concern to progressives. That is undoubtedly the desired outcome.

Frustrated by what they see as a “conservative” court that includes three justices—Neil Gorsuch, Brett Kavanaugh and Amy Coney Barrett —with whom they disagree and therefore deem “illegitimate,” progressives seem willing to undermine any aspect of our republic necessary to exact political revenge. Those Americans not bent on a court-packing scheme see the political move for what it is: an attempted coup against our Constitution.

Perhaps the left should hear once again from Justice Ruth Bader Ginsburg. Shortly before her death, Ginsburg spoke against court packing in a candid interview with NPR.

“Nine seems to be a good number,” she said. “It’s been that way for a long time. I think it was a bad idea when President Franklin Roosevelt tried to pack the court.”

But a history lesson was not her sole concern. Court packing, Ginsburg observed, would destroy judicial independence: “If anything would make the court look partisan, it would be that—one side saying, ‘When we’re in power, we’re going to enlarge the number of judges, so we would have more people who would vote the way we want them to.’”

If the left will not listen to Ginsburg’s words, perhaps they will heed current Justice Stephen Breyer. Speaking just one day before Biden announced his commission, Breyer gave a speech at Harvard Law School issuing a similar warning: “If the public sees judges as politicians in robes, its confidence in the courts—and the rule of law itself—can only diminish, diminishing the court’s power, including its power to act as a check on other branches.” Breyer is right. Court packing is a brazen attempt by radical elites to undermine our very judicial system and overthrow the trust we have in its independence.

An independent judiciary is an essential check on the power of the executive and legislative branches and the fleeting political whims of the culture.

If this politically motivated scheme to pack the Supreme Court is successful, the judiciary will no longer be a safeguard for our most treasured civil liberties: religion, speech, press, etc. Rather, it will be little more than a political tool of the executive and legislative branches, rubber-stamping political policies of the party in control of Congress and the presidency. Democrats once understood this truth and the danger to democracy it posed.

When Roosevelt, the Democratic icon, attempted to add justices to a Supreme Court that had left his New Deal policies in a lurch, it was members of his own party who denounced the scheme.

Senate judiciary members called changing the court “needless, futile, and (an) utterly dangerous abandonment of constitutional principle.” Adding that court packing is “a measure which should be emphatically rejected (so) that its parallel will never again be presented to free representatives of the free people of America.” Let us hope there are yet progressive Democrats today willing to put a stop to a Supreme Court coup.

Some things in politics never change. As Biden himself once observed, court packing is “a bonehead idea.” We do not need another government commission or more political power grabs. We need to follow our Constitution.

What happens when you put three Democrats and three Republicans in a room?

They might shout and grandstand, but the odds are small that there will be substantive progress on important issues or, in the case of the Federal Election Commission, enforcement of the nation’s election laws. Congress might not be able to mend the bitter partisanship that rends the nation, but it at least could fix this important agency.

The FEC is the referee for national elections. When a candidate for president or Congress breaks campaign laws, when a donor makes an improper campaign contribution, or when an advocacy group runs illegal ads about an election, the FEC calls foul and imposes sanctions.

It hasn’t done that in recent years because it has been hamstrung by partisanship and vacancies left unfilled.

The FEC is supposed to have six members, no more than three of whom may be from one political party. In practice, that means the board almost always splits 3-3 between Democrats and Republicans. Because it takes four votes to do anything, there needs to be some bipartisan agreement. Good luck finding that.

U.S. Rep. Derek Kilmer, a Washington Democrat, has been pushing to reform the FEC for years, and he has gotten some traction. His ideas made it into a massive election reform bill that has passed the U.S. House and awaits action in the Senate.

Kilmer wants to take the commission down to five members with a requirement that at least one be an independent who hasn’t registered or been involved with a political party for at least five years. With an odd number of members, tie votes that prevent action would be rare, and with a little luck the independent would be truly nonpartisan. A “blue ribbon” advisory committee would recommend candidates to the president for nomination, and the Senate would need to confirm them.

Kilmer drew inspiration for this model from Washington state’s redistricting commission, with its five members, one of whom is nonpartisan and chairs the commission. It has successfully drawn the state’s congressional districts every 10 years for the past three decades.

The fate of Kilmer’s proposal hinges on Senate Republicans who have opposed reforming the FEC and can filibuster the bill. They worry that Democrats would stack the new commission with a fifth member who is nonpartisan on paper but aligns with the left.

Perhaps, but then Republicans could do the same next time they control Congress and the White House. It’s a risk worth taking. Clean and fair elections are crucial to a functional democracy and public confidence that the system isn’t rigged. The Washington model could help restore that.

The “Soul Food” article (Page 5C, Thursday) had false statements presented as fact. I will give you one example: “What if I told you ... that Stephen, a disciple, baptized Philip, who was a Black, trans man?”

Nowhere in the 66 books of the Bible or in the historical record does it say that Stephen baptized Philip. What the Bible does say (Acts 8:26-40) is that Philip baptized an Ethiopian eunuch. Historically, an Ethiopian is black, so we have a black eunuch. By studying the historical definition at the time and the biblical definition as stated by Jesus in Matthew 19:12, you will know what an eunuch was and is.

As a Christian, I believe the Bible is true and with the Holy Spirit’s help (James 4:8), I can interpret, in context, what the Bible really says. This is done by studying the Bible and learning about Jesus, the people, their terminology and customs of the time, and how they related to each other in society. Then I have to adjust my thoughts and interpretations based on God’s truth, not on what I have experienced or perceive or on my agenda or intent.

What if I told you that Jesus was not a good-looking white savior? Do the study and research and find out!

Can the Afghan military stand up to the Taliban?

Gen. Frank McKenzie, head of the U.S. Central Command, said the Afghan military will certainly collapse after we pull out of Afghanistan. The question has to be asked: What did we create after 20 years in Afghanistan? Did we choose to create an Afghan military that is dependent on us instead of creating a military that can stand on its own against the Taliban without our help?

US must start testing all migrants for COVID-19

Canada, Australia and the United Kingdom have testing and quarantine requirements to control COVID-19 and its variants. To drive into Canada, all travelers are required to provide proof of a negative test and then quarantine for a minimum of 14 days, even if their COVID-19 tests are negative.

From a public health standpoint, there is no reason to impose greater restrictions on people flying here than on those entering over land illegally. President Joe Biden’s policies are illogical and inconsistent. Biden is consciously allowing COVID-19 into the country, which will lead to continued shutdown and sacrifice. House Democrats are aware of this threat, yet they blocked proposed legislation that sought to implement mandatory COVID-19 testing at the border.

Jurisdictions that offer COVID-19 testing report that people coming through the southern border are testing positive between three and 10 times the rate of the rest of the population. These people and those who aren’t tested are traveling to other states.

Biden must act to ensure that every person who comes to the U.S. is tested for COVID-19 before being allowed to enter and travel freely.