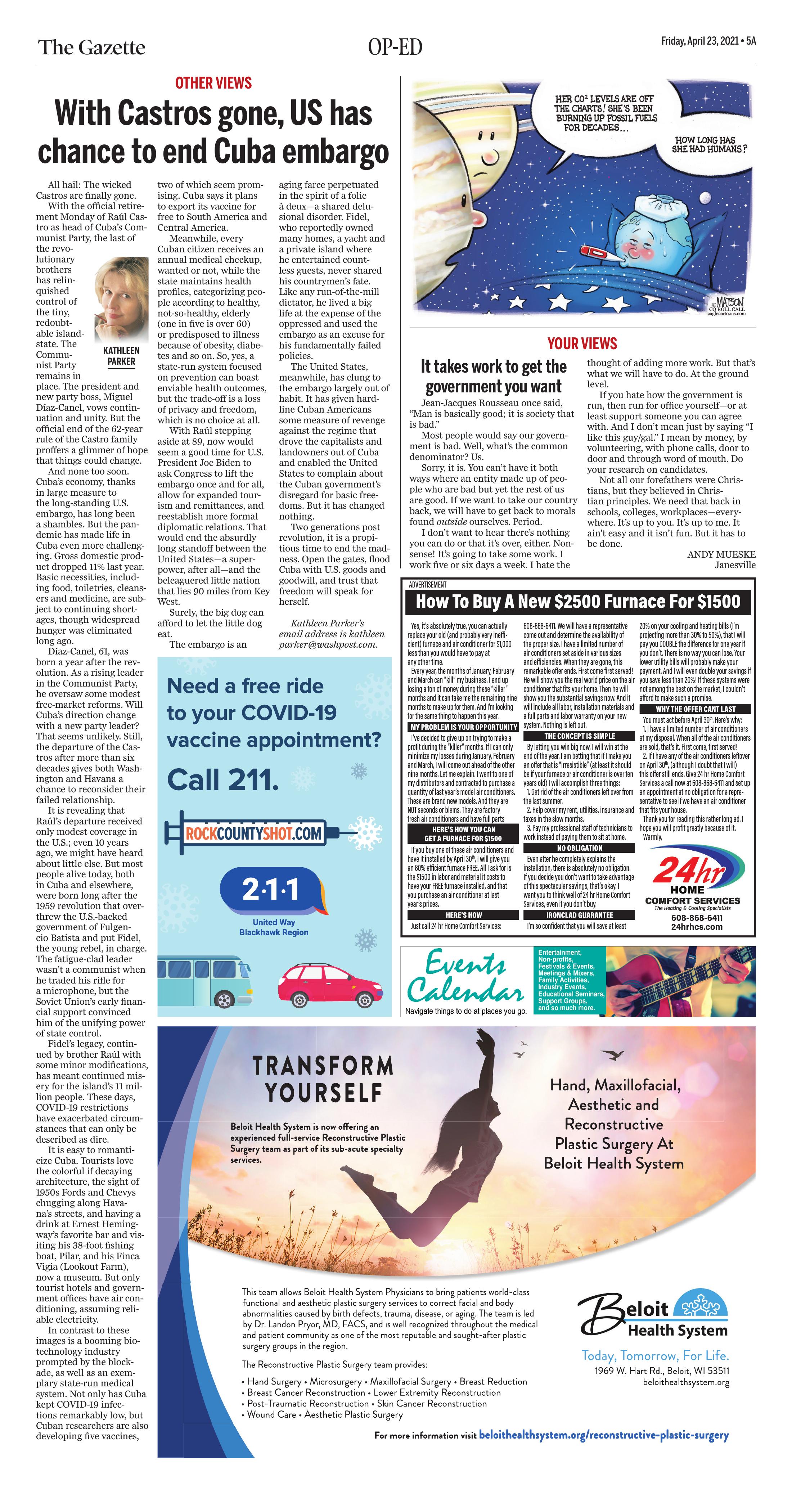 All hail: The wicked Castros are finally gone.

With the official retirement Monday of Raúl Castro as head of Cuba’s Communist Party, the last of the revolutionary brothers has relinquished control of the tiny, redoubtable island-state. The Communist Party remains in place. The president and new party boss, Miguel Díaz-Canel, vows continuation and unity. But the official end of the 62-year rule of the Castro family proffers a glimmer of hope that things could change.

And none too soon. Cuba’s economy, thanks in large measure to the long-standing U.S. embargo, has long been a shambles. But the pandemic has made life in Cuba even more challenging. Gross domestic product dropped 11% last year. Basic necessities, including food, toiletries, cleansers and medicine, are subject to continuing shortages, though widespread hunger was eliminated long ago.

Díaz-Canel, 61, was born a year after the revolution. As a rising leader in the Communist Party, he oversaw some modest free-market reforms. Will Cuba’s direction change with a new party leader? That seems unlikely. Still, the departure of the Castros after more than six decades gives both Washington and Havana a chance to reconsider their failed relationship.

It is revealing that Raúl’s departure received only modest coverage in the U.S.; even 10 years ago, we might have heard about little else. But most people alive today, both in Cuba and elsewhere, were born long after the 1959 revolution that overthrew the U.S.-backed government of Fulgencio Batista and put Fidel, the young rebel, in charge. The fatigue-clad leader wasn’t a communist when he traded his rifle for a microphone, but the Soviet Union’s early financial support convinced him of the unifying power of state control.

Fidel’s legacy, continued by brother Raúl with some minor modifications, has meant continued misery for the island’s 11 million people. These days, COVID-19 restrictions have exacerbated circumstances that can only be described as dire.

It is easy to romanticize Cuba. Tourists love the colorful if decaying architecture, the sight of 1950s Fords and Chevys chugging along Havana’s streets, and having a drink at Ernest Hemingway’s favorite bar and visiting his 38-foot fishing boat, Pilar, and his Finca Vigia (Lookout Farm), now a museum. But only tourist hotels and government offices have air conditioning, assuming reliable electricity.

In contrast to these images is a booming biotechnology industry prompted by the blockade, as well as an exemplary state-run medical system. Not only has Cuba kept COVID-19 infections remarkably low, but Cuban researchers are also developing five vaccines, two of which seem promising. Cuba says it plans to export its vaccine for free to South America and Central America.

Meanwhile, every Cuban citizen receives an annual medical checkup, wanted or not, while the state maintains health profiles, categorizing people according to healthy, not-so-healthy, elderly (one in five is over 60) or predisposed to illness because of obesity, diabetes and so on. So, yes, a state-run system focused on prevention can boast enviable health outcomes, but the trade-off is a loss of privacy and freedom, which is no choice at all.

With Raúl stepping aside at 89, now would seem a good time for U.S. President Joe Biden to ask Congress to lift the embargo once and for all, allow for expanded tourism and remittances, and reestablish more formal diplomatic relations. That would end the absurdly long standoff between the United States—a superpower, after all—and the beleaguered little nation that lies 90 miles from Key West.

Surely, the big dog can afford to let the little dog eat.

The embargo is an aging farce perpetuated in the spirit of a folie à deux—a shared delusional disorder. Fidel, who reportedly owned many homes, a yacht and a private island where he entertained countless guests, never shared his countrymen’s fate. Like any run-of-the-mill dictator, he lived a big life at the expense of the oppressed and used the embargo as an excuse for his fundamentally failed policies.

The United States, meanwhile, has clung to the embargo largely out of habit. It has given hard-line Cuban Americans some measure of revenge against the regime that drove the capitalists and landowners out of Cuba and enabled the United States to complain about the Cuban government’s disregard for basic freedoms. But it has changed nothing.

Two generations post revolution, it is a propitious time to end the madness. Open the gates, flood Cuba with U.S. goods and goodwill, and trust that freedom will speak for herself. 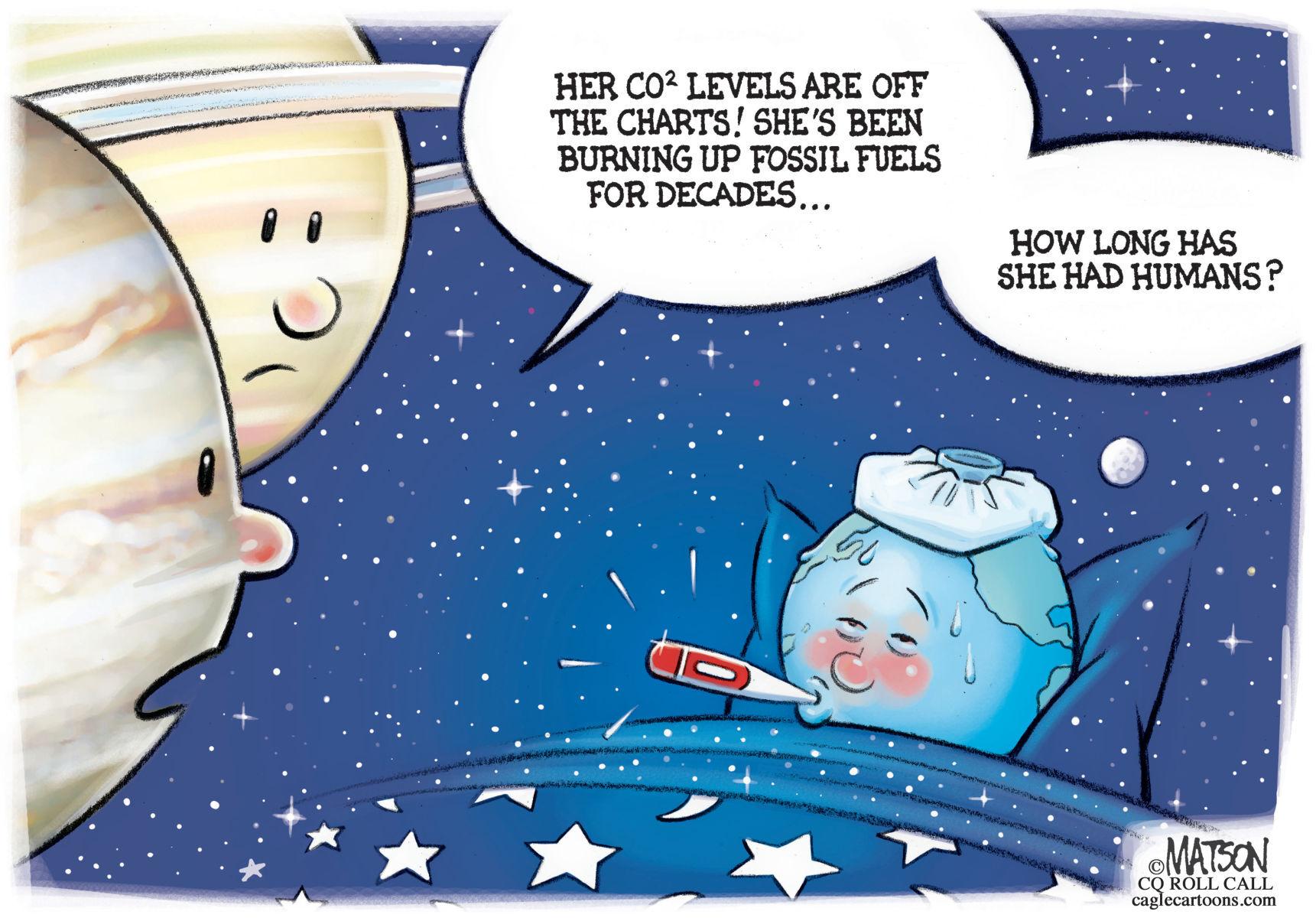 Letters
Your Views: It takes work to get the government you want

Jean-Jacques Rousseau once said, "Man is basically good; it is society that is bad."

Most people would say our government is bad. Well, what's the common denominator? Us.

Sorry, it is. You can't have it both ways where an entity made up of people who are bad but yet the rest of us are good. If we want to take our country back, we will have to get back to morals found outside ourselves. Period.

I don't want to hear there's nothing you can do or that it's over, either. Nonsense! It's going to take some work. I work five or six days a week. I hate the thought of adding more work. But that's what we will have to do. At the ground level.

If you hate how the government is run, then run for office yourself—or at least support someone you can agree with. And I don't mean just by saying "I like this guy/gal." I mean by money, by volunteering, with phone calls, door to door and through word of mouth. Do your research on candidates.

Not all our forefathers were Christians, but they believed in Christian principles. We need that back in schools, colleges, workplaces—everywhere. It's up to you. It's up to me. It ain't easy and it isn't fun. But it has to be done.