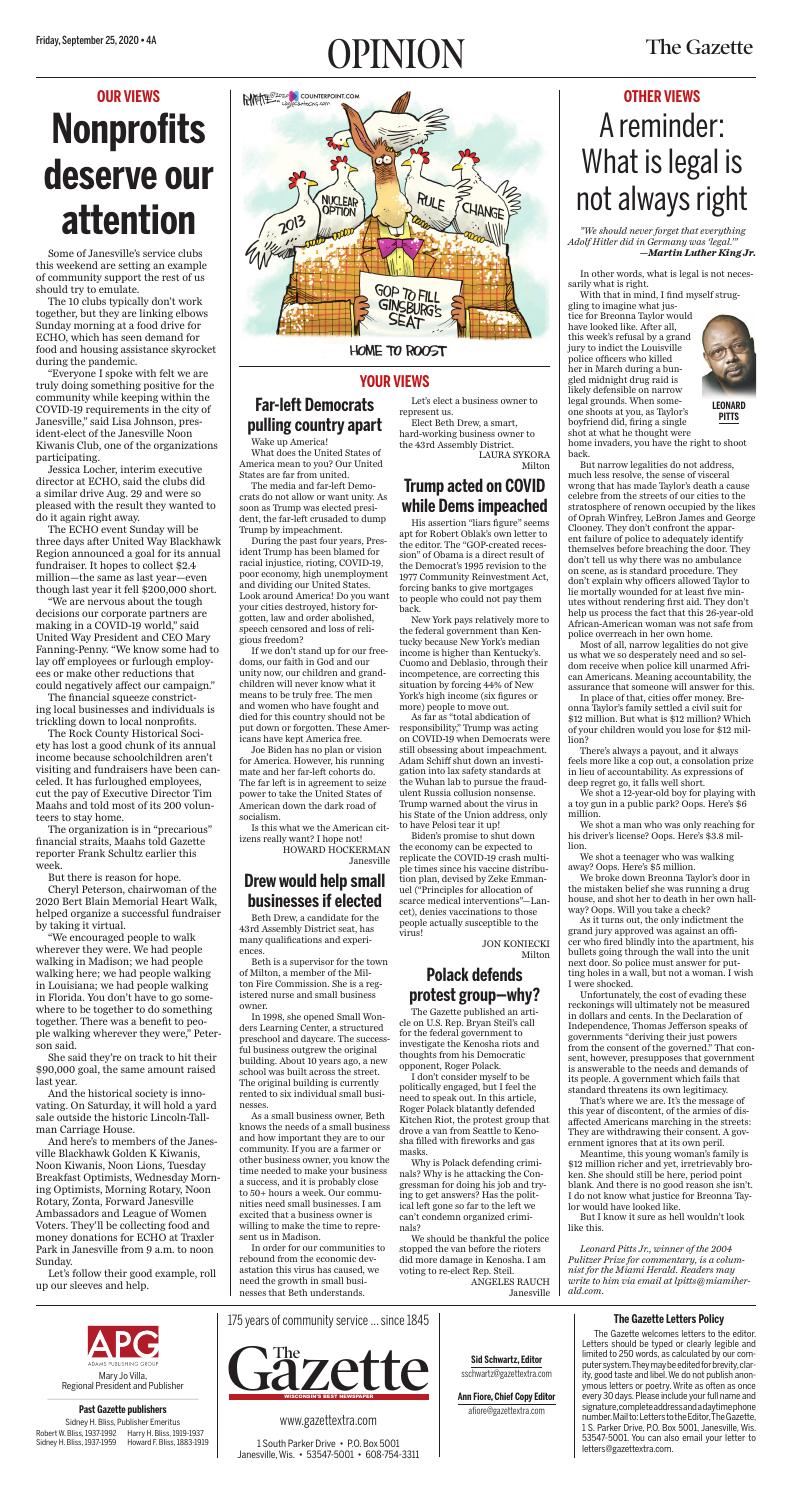 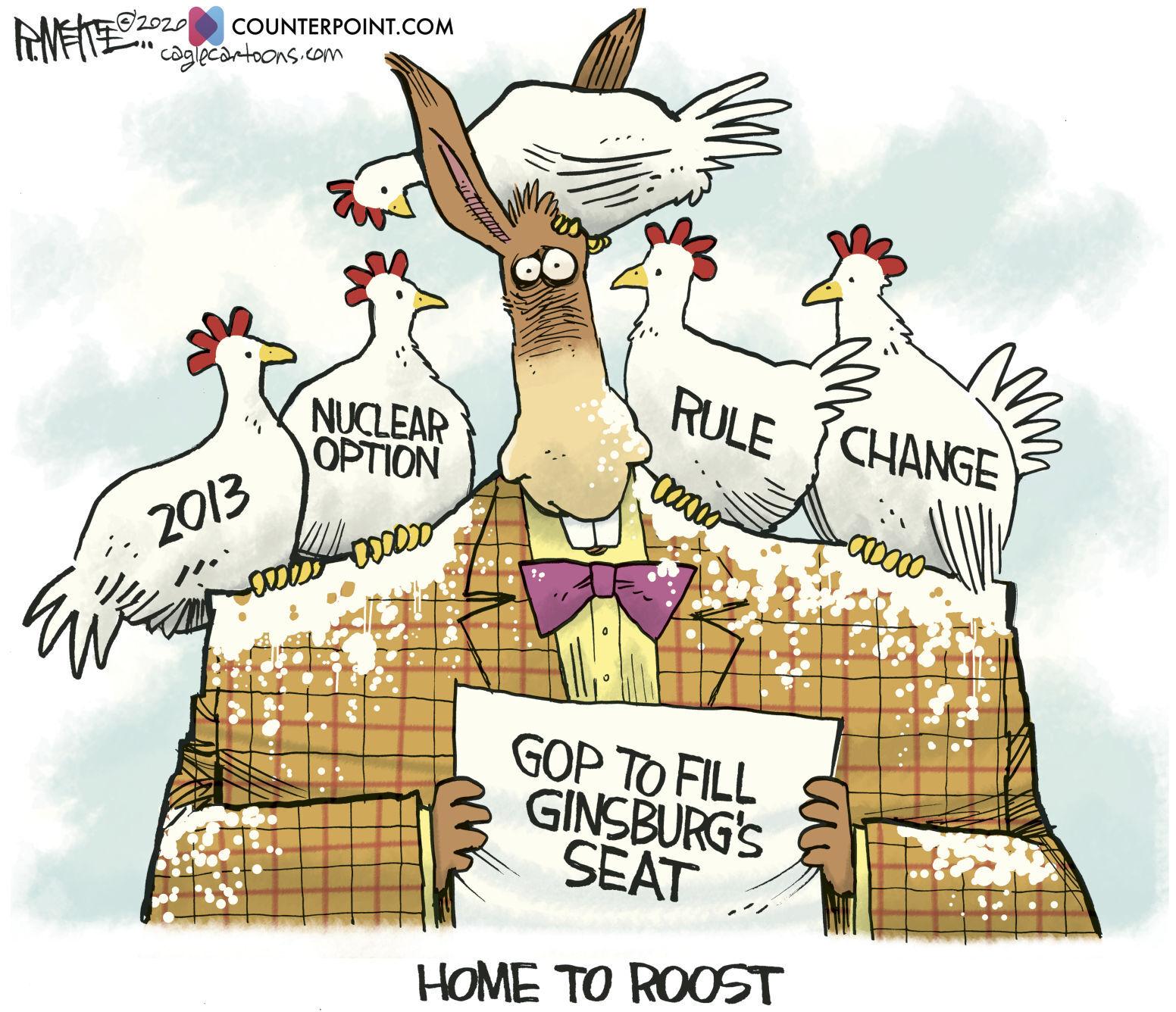 The media and far-left Democrats do not allow or want unity. As soon as Trump was elected president, the far-left crusaded to dump Trump by impeachment.

During the past four years, President Trump has been blamed for racial injustice, rioting, COVID-19, poor economy, high unemployment and dividing our United States. Look around America! Do you want your cities destroyed, history forgotten, law and order abolished, speech censored and loss of religious freedom?

If we don’t stand up for our freedoms, our faith in God and our unity now, our children and grandchildren will never know what it means to be truly free. The men and women who have fought and died for this country should not be put down or forgotten. These Americans have kept America free.

Joe Biden has no plan or vision for America. However, his running mate and her far-left cohorts do. The far left is in agreement to seize power to take the United States of American down the dark road of socialism.

Is this what we the American citizens really want? I hope not!

Beth Drew, a candidate for the 43rd Assembly District seat, has many qualifications and experiences.

Beth is a supervisor for the town of Milton, a member of the Milton Fire Commission. She is a registered nurse and small business owner.

In 1998, she opened Small Wonders Learning Center, a structured preschool and daycare. The successful business outgrew the original building. About 10 years ago, a new school was built across the street. The original building is currently rented to six individual small businesses.

In order for our communities to rebound from the economic devastation this virus has caused, we need the growth in small businesses that Beth understands.

Let’s elect a business owner to represent us.

His assertion “liars figure” seems apt for Robert Oblak’s own letter to the editor. The “GOP-created recession” of Obama is a direct result of the Democrat’s 1995 revision to the 1977 Community Reinvestment Act, forcing banks to give mortgages to people who could not pay them back.

New York pays relatively more to the federal government than Kentucky because New York’s median income is higher than Kentucky’s. Cuomo and Deblasio, through their incompetence, are correcting this situation by forcing 44% of New York’s high income (six figures or more) people to move out.

As far as “total abdication of responsibility,” Trump was acting on COVID-19 when Democrats were still obsessing about impeachment. Adam Schiff shut down an investigation into lax safety standards at the Wuhan lab to pursue the fraudulent Russia collusion nonsense. Trump warned about the virus in his State of the Union address, only to have Pelosi tear it up!

Biden’s promise to shut down the economy can be expected to replicate the COVID-19 crash multiple times since his vaccine distribution plan, devised by Zeke Emmanuel (“Principles for allocation of scarce medical interventions”—Lancet), denies vaccinations to those people actually susceptible to the virus!

The Gazette published an article on U.S. Rep. Bryan Steil’s call for the federal government to investigate the Kenosha riots and thoughts from his Democratic opponent, Roger Polack.

I don’t consider myself to be politically engaged, but I feel the need to speak out. In this article, Roger Polack blatantly defended Kitchen Riot, the protest group that drove a van from Seattle to Kenosha filled with fireworks and gas masks.

Why is Polack defending criminals? Why is he attacking the Congressman for doing his job and trying to get answers? Has the political left gone so far to the left we can’t condemn organized criminals?

We should be thankful the police stopped the van before the rioters did more damage in Kenosha. I am voting to re-elect Rep. Steil.

Our_views
Our Views: During the pandemic, don't forget our nonprofits
Anthony Wahl

Volunteers set up tents Wednesday on the grounds of the Lincoln-Tallman House for the Rock County Historical Society’s Autumn Yard Sale, set for 8 a.m. to 2 p.m. Saturday.

Some of Janesville’s service clubs this weekend are setting an example of community support the rest of us should try to emulate.

The 10 clubs typically don’t work together, but they are linking elbows Sunday morning at a food drive for ECHO, which has seen demand for food and housing assistance skyrocket during the pandemic.

“Everyone I spoke with felt we are truly doing something positive for the community while keeping within the COVID-19 requirements in the city of Janesville,” said Lisa Johnson, president-elect of the Janesville Noon Kiwanis Club, one of the organizations participating.

Jessica Locher, interim executive director at ECHO, said the clubs did a similar drive Aug. 29 and were so pleased with the result they wanted to do it again right away.

The ECHO event Sunday will be three days after United Way Blackhawk Region announced a goal for its annual fundraiser. It hopes to collect $2.4 million—the same as last year—even though last year it fell $200,000 short.

“We are nervous about the tough decisions our corporate partners are making in a COVID-19 world,” said United Way President and CEO Mary Fanning-Penny. “We know some had to lay off employees or furlough employees or make other reductions that could negatively affect our campaign.”

The financial squeeze constricting local businesses and individuals is trickling down to local nonprofits.

The Rock County Historical Society has lost a good chunk of its annual income because schoolchildren aren’t visiting and fundraisers have been canceled. It has furloughed employees, cut the pay of Executive Director Tim Maahs and told most of its 200 volunteers to stay home.

But there is reason for hope.

She said they’re on track to hit their $90,000 goal, the same amount raised last year.

And the historical society is innovating. On Saturday, it will hold a yard sale outside the historic Lincoln-Tallman Carriage House.

Let’s follow their good example, roll up our sleeves and help.

Other_views
Pitts: Which of your children would you lose for $12 million?

”We should never forget that everything Adolf Hitler did in Germany was ‘legal.’”

In other words, what is legal is not necessarily what is right.

With that in mind, I find myself struggling to imagine what justice for Breonna Taylor would have looked like. After all, this week’s refusal by a grand jury to indict the Louisville police officers who killed her in March during a bungled midnight drug raid is likely defensible on narrow legal grounds. When someone shoots at you, as Taylor’s boyfriend did, firing a single shot at what he thought were home invaders, you have the right to shoot back.

But narrow legalities do not address, much less resolve, the sense of visceral wrong that has made Taylor’s death a cause celebre from the streets of our cities to the stratosphere of renown occupied by the likes of Oprah Winfrey, LeBron James and George Clooney. They don’t confront the apparent failure of police to adequately identify themselves before breaching the door. They don’t tell us why there was no ambulance on scene, as is standard procedure. They don’t explain why officers allowed Taylor to lie mortally wounded for at least five minutes without rendering first aid. They don’t help us process the fact that this 26-year-old African-American woman was not safe from police overreach in her own home.

Most of all, narrow legalities do not give us what we so desperately need and so seldom receive when police kill unarmed African Americans. Meaning accountability, the assurance that someone will answer for this.

There’s always a payout, and it always feels more like a cop out, a consolation prize in lieu of accountability. As expressions of deep regret go, it falls well short.

We shot a 12-year-old boy for playing with a toy gun in a public park? Oops. Here’s $6 million.

We shot a man who was only reaching for his driver’s license? Oops. Here’s $3.8 million.

We shot a teenager who was walking away? Oops. Here’s $5 million.

We broke down Breonna Taylor’s door in the mistaken belief she was running a drug house, and shot her to death in her own hallway? Oops. Will you take a check?

As it turns out, the only indictment the grand jury approved was against an officer who fired blindly into the apartment, his bullets going through the wall into the unit next door. So police must answer for putting holes in a wall, but not a woman. I wish I were shocked.

Unfortunately, the cost of evading these reckonings will ultimately not be measured in dollars and cents. In the Declaration of Independence, Thomas Jefferson speaks of governments “deriving their just powers from the consent of the governed.” That consent, however, presupposes that government is answerable to the needs and demands of its people. A government which fails that standard threatens its own legitimacy.

That’s where we are. It’s the message of this year of discontent, of the armies of disaffected Americans marching in the streets: They are withdrawing their consent. A government ignores that at its own peril.

Meantime, this young woman’s family is $12 million richer and yet, irretrievably broken. She should still be here, period point blank. And there is no good reason she isn’t. I do not know what justice for Breonna Taylor would have looked like.

But I know it sure as hell wouldn’t look like this. 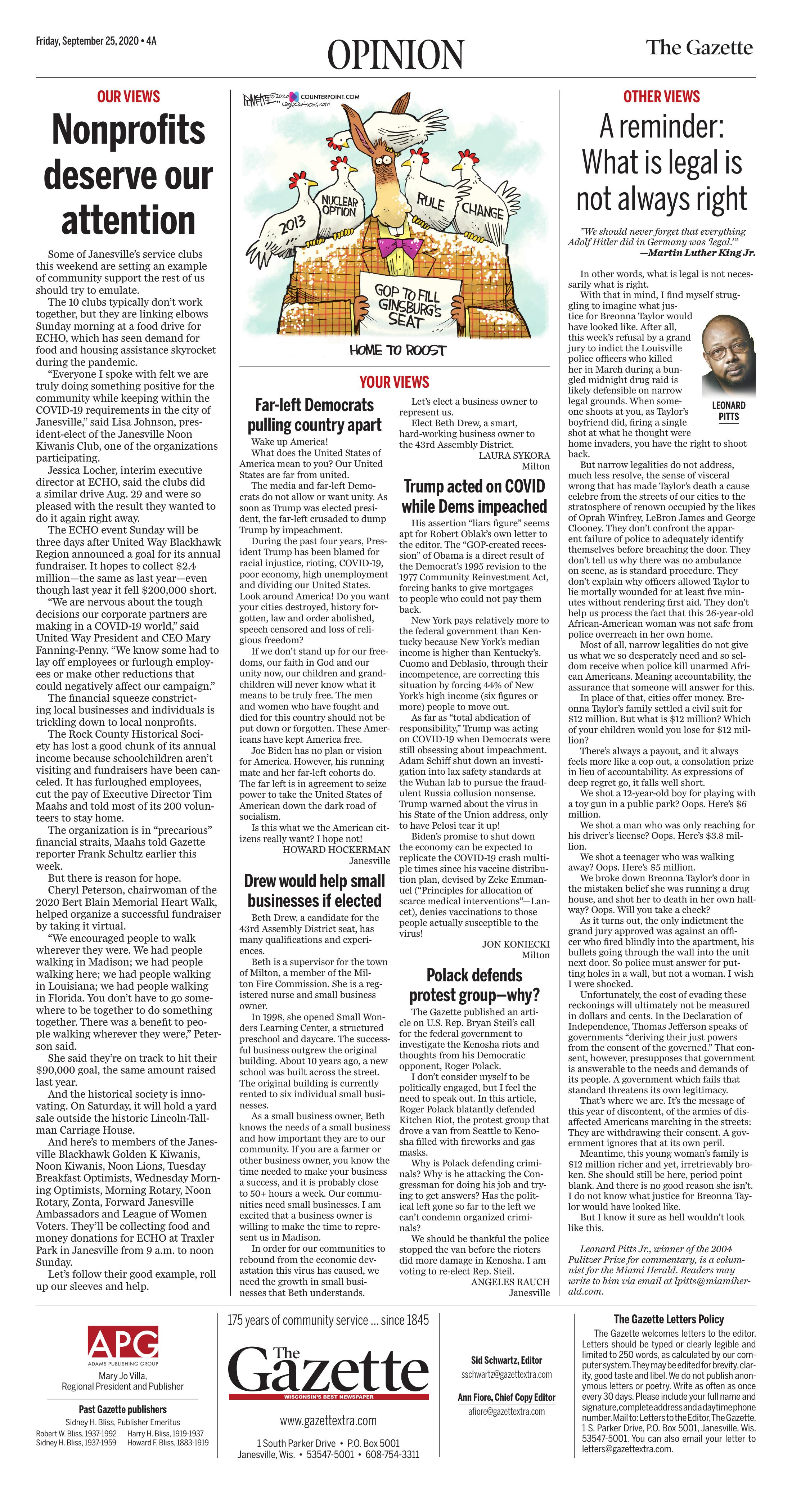