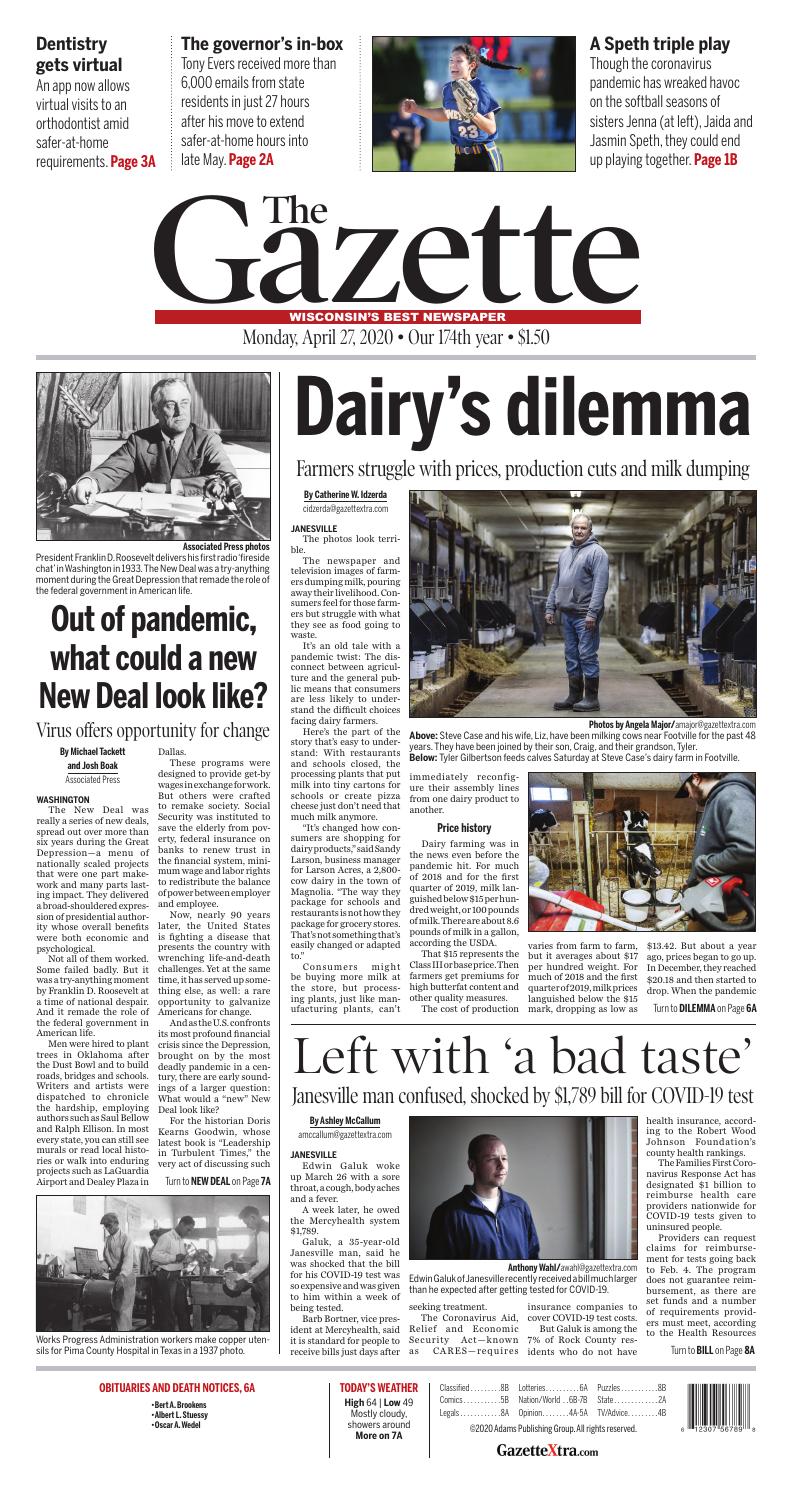 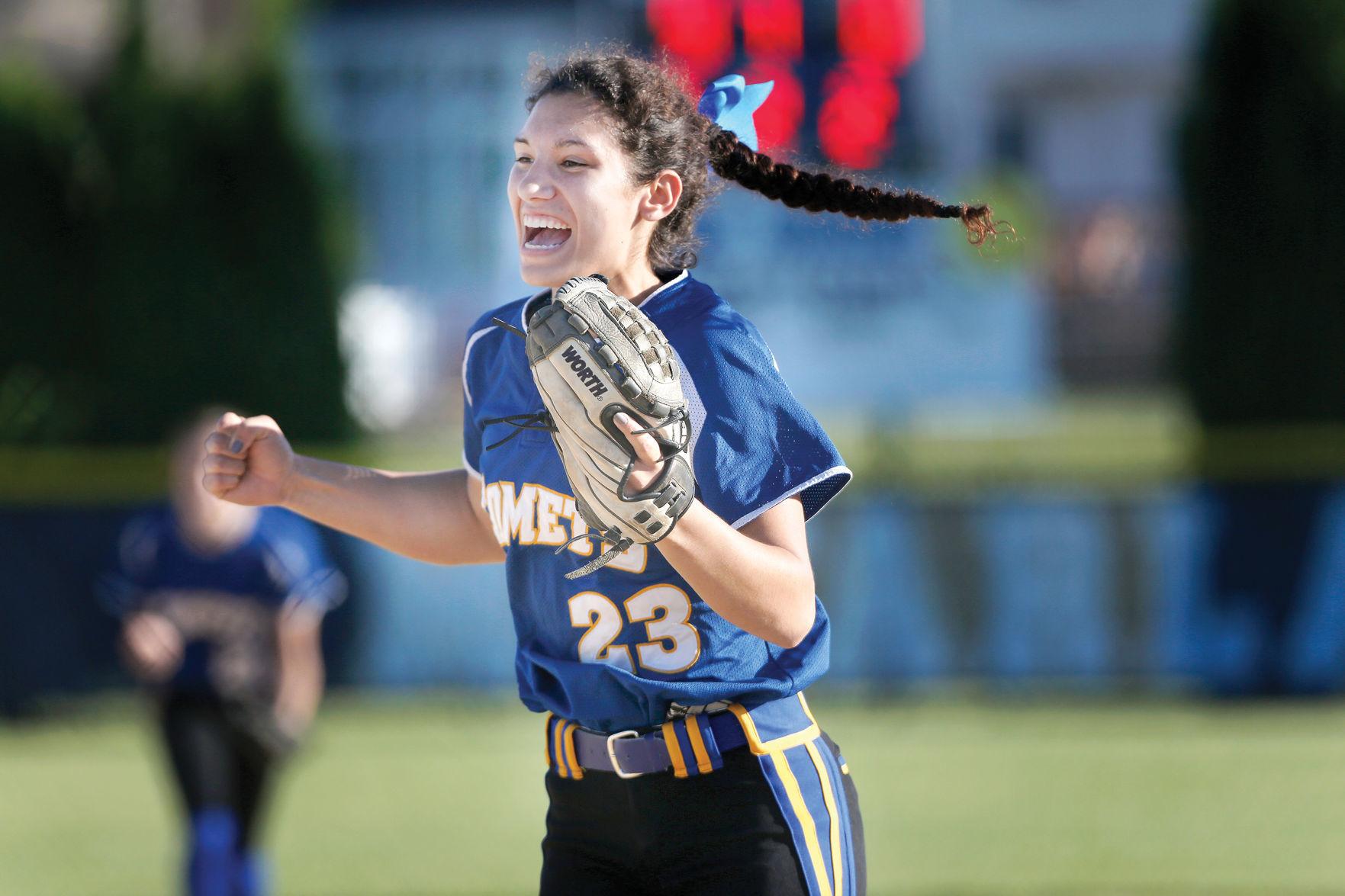 Delavan-Darien pitcher Jennah Speth celebrates after the final strike to end their Division 2 sectional final game away against McFarland on Thursday, June 2. Delavan-Darien advances to the state tournament in Madison with their 9-0 win.

The newspaper and television images of farmers dumping milk, pouring away their livelihood. Consumers feel for those farmers but struggle with what they see as food going to waste.

It’s an old tale with a pandemic twist: The disconnect between agriculture and the general public means that consumers are less likely to understand the difficult choices facing dairy farmers.

Here’s the part of the story that’s easy to understand: With restaurants and schools closed, the processing plants that put milk into tiny cartons for schools or create pizza cheese just don’t need that much milk anymore.

“It’s changed how consumers are shopping for dairy products,” said Sandy Larson, business manager for Larson Acres, a 2,800-cow dairy in the town of Magnolia. “The way they package for schools and restaurants is not how they package for grocery stores. That’s not something that’s easily changed or adapted to.”

Consumers might be buying more milk at the store, but processing plants, just like manufacturing plants, can’t immediately reconfigure their assembly lines from one dairy product to another. 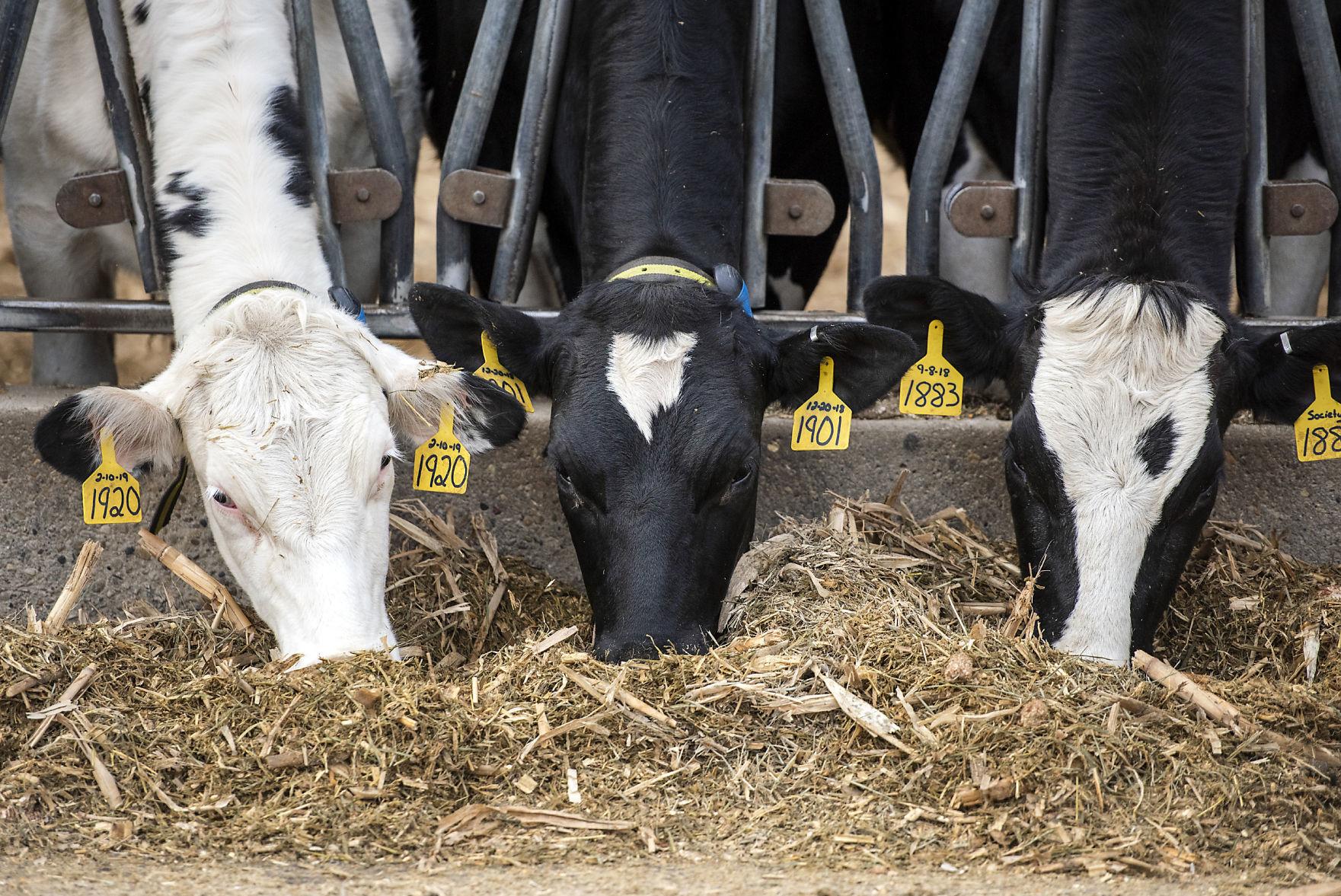 Cows lower their heads to eat after being fed Saturday at Steve Case’s Footville dairy farm.

Dairy farming was in the news even before the pandemic hit. For much of 2018 and for the first quarter of 2019, milk languished below $15 per hundred weight, or 100 pounds of milk. There are about 8.6 pounds of milk in a gallon, according the USDA.

That $15 represents the Class III or base price. Then farmers get premiums for high butterfat content and other quality measures.

The cost of production varies from farm to farm, but it averages about $17 per hundred weight. For much of 2018 and the first quarter of 2019, milk prices languished below the $15 mark, dropping as low as $13.42. But about a year ago, prices began to go up. In December, they reached $20.18 and then started to drop. When the pandemic hit, they plunged. 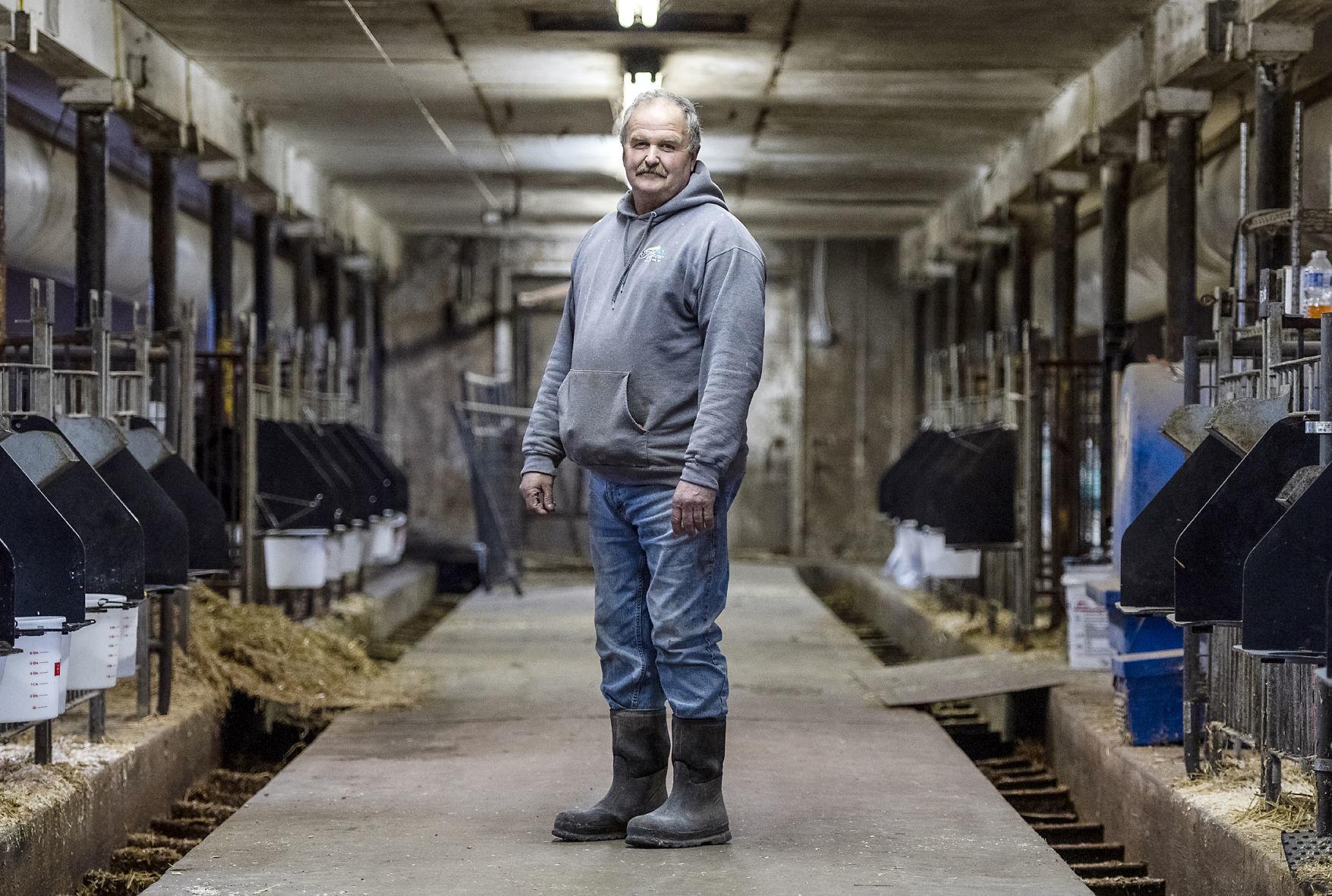 Steve Case and his wife, Liz, have been milking cows near Footville for the past 48 years. They’ve been joined by their son, Craig, and their grandson, Tyler.

Steve Case and his wife, Liz, have been milking cows near Footville for the past 48 years. They’ve been joined by their son, Craig, and their grandson, Tyler.

Case knows, as all dairy farmers do, that prices fluctuate, and they have to be prepared for those times. No dairy farmer is going to bank on continued good—or even rising—prices.

The Cases sell their milk to Decatur Dairy, and Steve Case is on the board of a co-op that sells to the dairy.

“We (the board) voted that starting May 1, we have cut our production by 10 percent,” Case said. “The dairy just cannot handle that much milk.”

The Cases milk about 145 cows twice a day. They produce 12,250 pounds of milk each day and are proud to have 37 cows who produce more than 100 pounds a day, well above the 80- to 90-pound daily average. A handful of their cows produce 142 pounds a day, a tribute to genetics and management.

“It’s not like you can turn that milk valve off,” Case said.

Case hopes it won’t mean dumping milk, but he knows it will mean other, equally grim, measures. 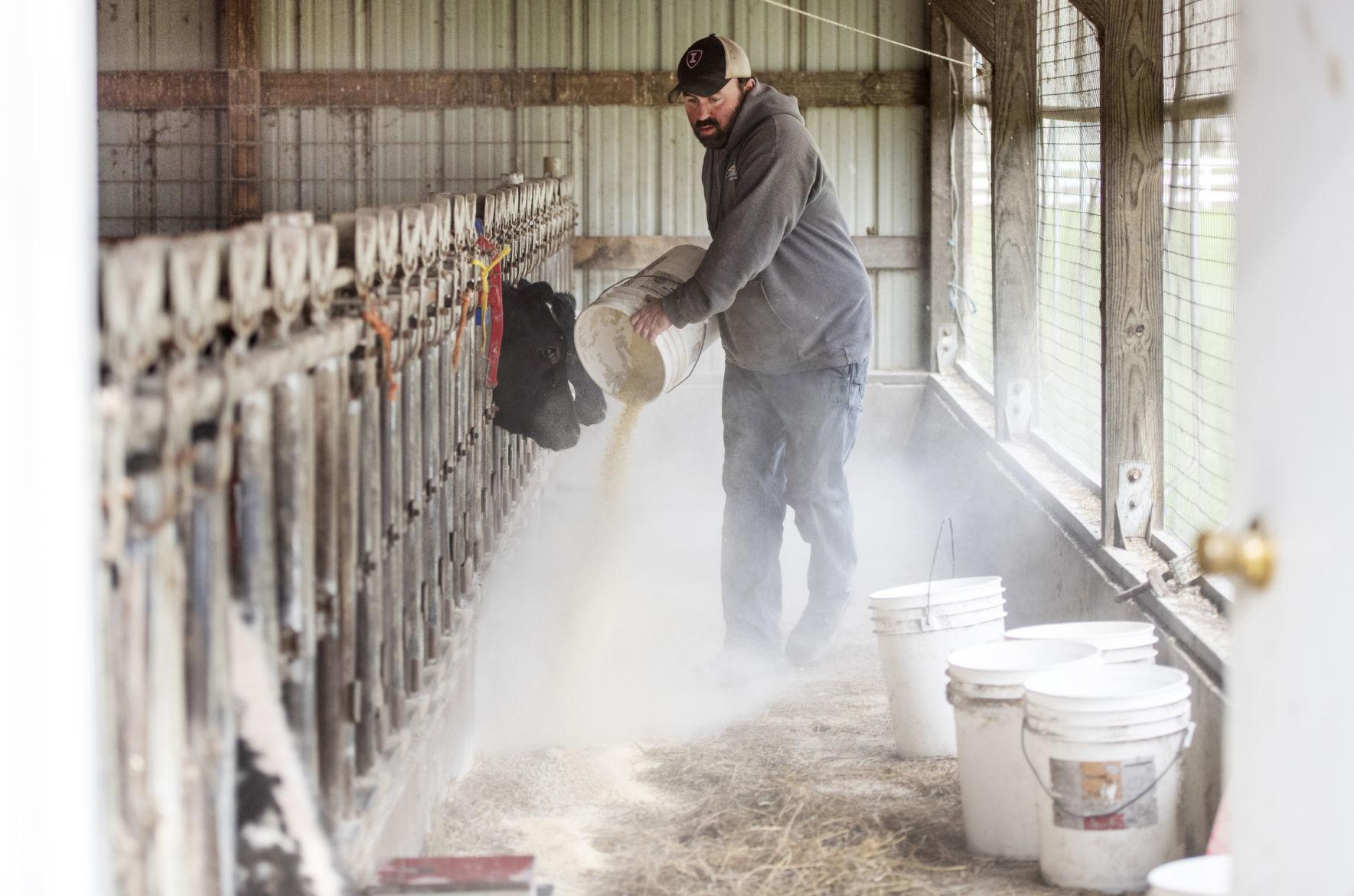 He has been culling the herd, taking animals to Monroe Equity, where they are sold for meat production. But that market has taken a dive, too. With meat processing plants slowing down or closing due to COVID-19, the demand isn’t there. He usually gets between $700 and $800 per cow. Now he gets between $300 and $400. The animals sell per pound, and there’s only a handful of buyers. They can offer whatever price per pound they want, and he has to take it.

He can also change his feeding system, giving his animals less protein in their total mix ration. The animals won’t go hungry, but they will produce less milk.

“So now I’ve got to take good stuff away from that cow so she can drop 30 or 40 pounds of production?” Case said. “It’s hard to do that.”

Dairy farm periodicals and websites are now full of articles like this one from Cornell University’s College of Ag and Life Sciences: “Diet and management considerations for emergencies: Reducing milk flow without harming cows and future production.”

A cow who gets her ration changed so she gives less milk during an emergency won’t immediately—if ever—return to peak production when her diet goes back to what it used to be.

So that’s another loss.

In addition, the family will be selling less than their usual volume, so they will be getting less money for less milk, a double hit.

Case plans to feed some of the excess milk to his calves. Usually, milk replacement is used because it is easier to manage. But this will save money and put the extra milk to good use.

Despite all of the economic trials, Case loves his job. He said he didn’t want a story designed to “make people feel sorry for dairy farmers.”

He just wants the facts out there so people will understand. 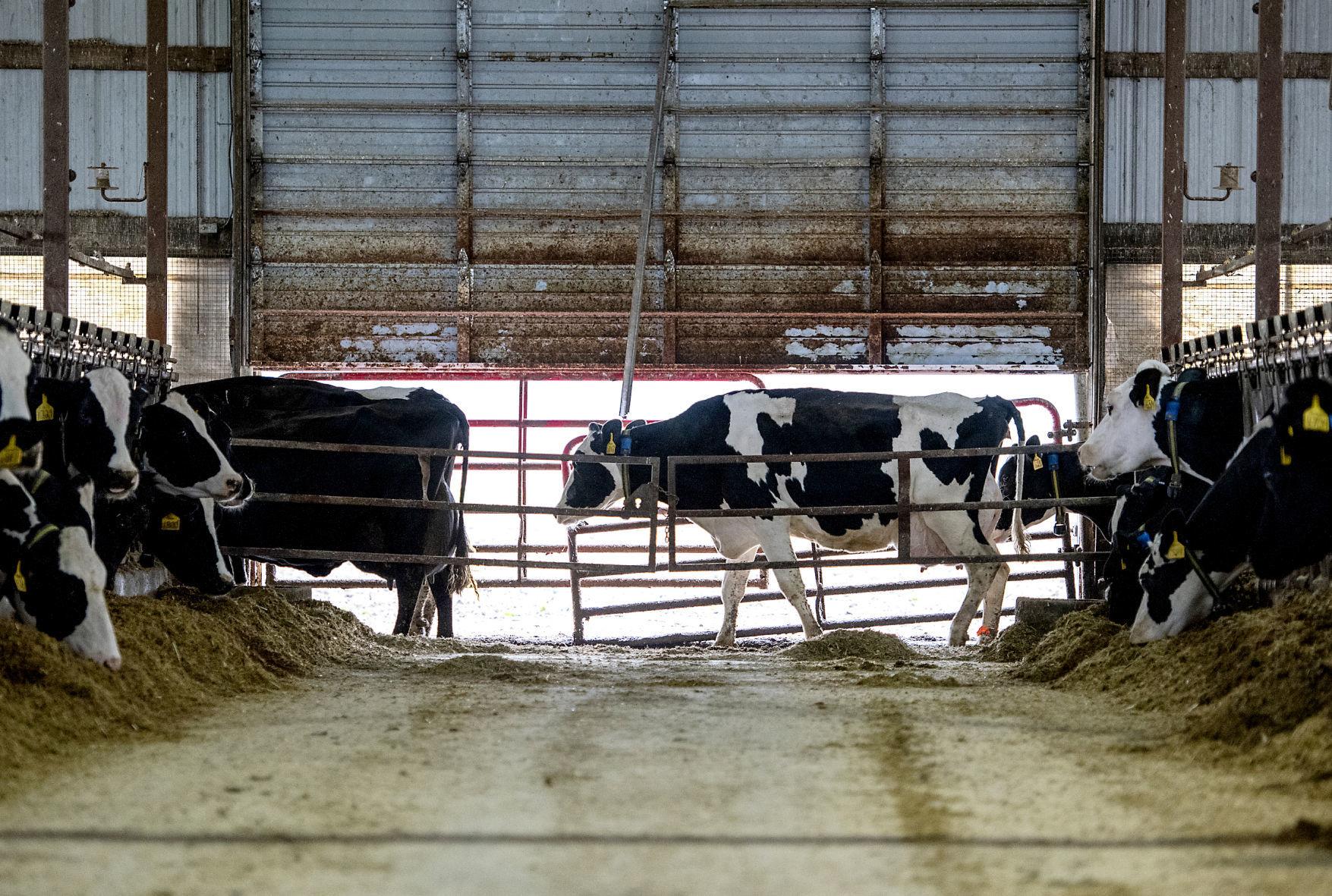 Cows are guided to the milking parlor Saturday, April 25, 2020, at Steve Case’s farm in Footville.

Larson recently announced on Facebook that her family had been through a difficult week. They had no choice but to dump milk, as their processing plant could no longer handle the volume.

Some people suggested that they donate it to food pantries or give it to those in need.

“I can’t do that,” Larson said. “I can’t pasteurize the milk on the farm.”

Pasteurizing, a process that kills harmful bacteria that can be found in raw milk, is done at the dairy plant. In Wisconsin, the sale of raw milk is prohibited.

Larson, who is a fifth-generation dairy farmer, sounds mournful when she talks about the whole situation.

“It’s hard. I watch the cows being milked every day and I know that milk is not going anywhere,” she said. “And my employees are sad.”

Larson also hates to see the milk just thrown away and wishes she could donate it.

“It’s just not that simple,” Larson said. “I hope people understand that.” 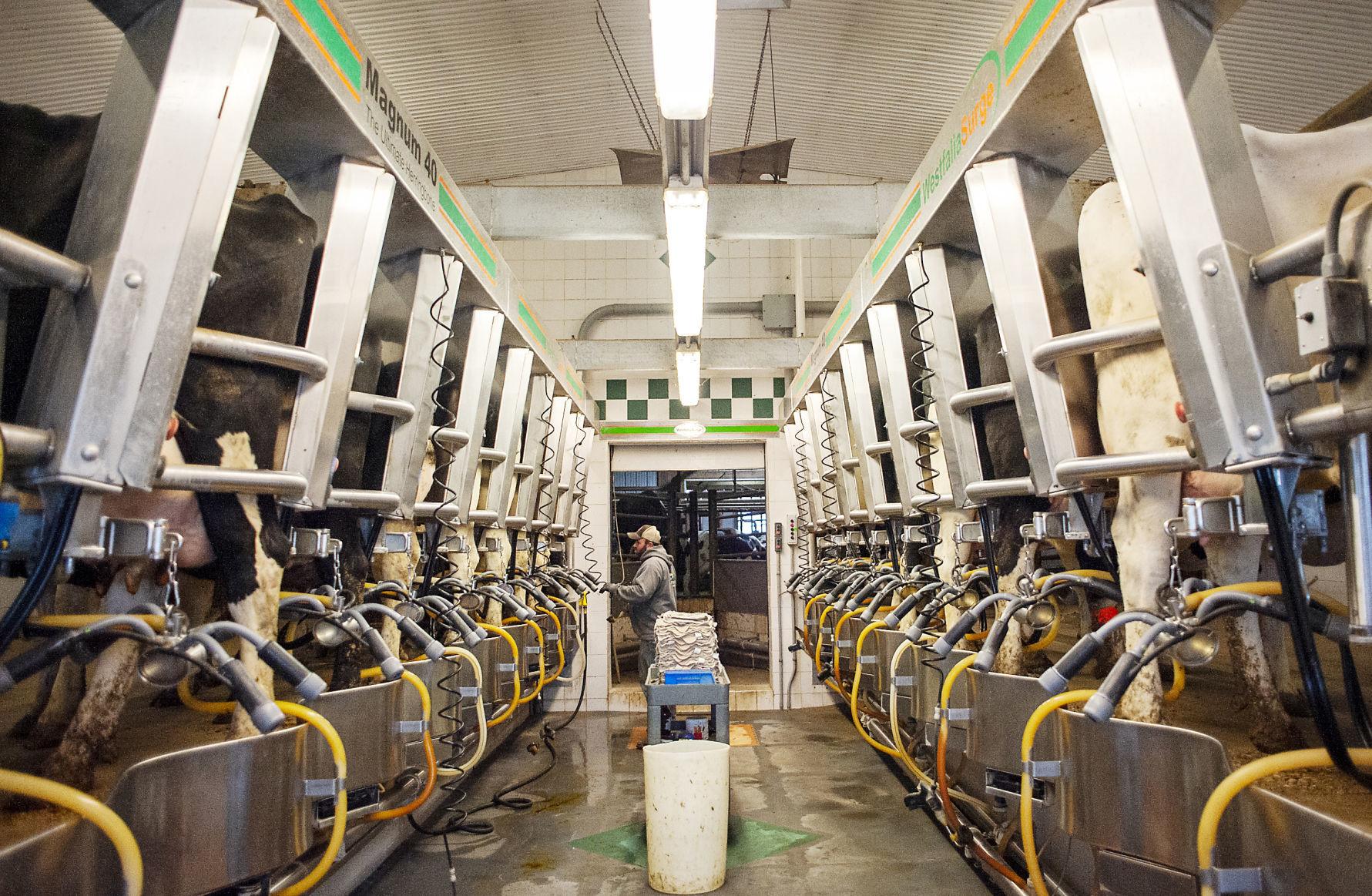 Edwin Galuk of Janesville recently received a bill much larger than he expected after getting tested for COVID-19.

Edwin Galuk of Janesville woke up sick March 26, and a doctor told him to get a COVID-19 test. Galuk, who is uninsured, recently received a $1,789 bill for the test.

Edwin Galuk woke up March 26 with a sore throat, a cough, body aches and a fever.

Galuk, a 35-year-old Janesville man, said he was shocked that the bill for his COVID-19 test was so expensive and was given to him within a week of being tested.

Barb Bortner, vice president at Mercyhealth, said it is standard for people to receive bills just days after seeking treatment.

But Galuk is among the 7% of Rock County residents who do not have health insurance, according to the Robert Wood Johnson Foundation’s county health rankings.

Providers can request claims for reimbursement for tests going back to Feb. 4. The program does not guarantee reimbursement, as there are set funds and a number of requirements providers must meet, according to the Health Resources and Services Administration guidelines.

With constant changes in state and federal programs, Galuk wonders why Mercyhealth chose to send him a bill so soon with no disclaimer about potential aid programs.

“I just thought it was wrong sending it (the bill) so quickly without a note to say this might change,” Galuk said. “It left a bad taste in my mouth.”

A courtesy bill is always sent to patients to show which charges have been submitted to insurance companies, Bortner said.

Fortunately, Galuk did not have COVID-19. But he said he is left with the stress of paying the bill.

Galuk works as a heating and cooling installer and service technician.

He and his girlfriend have been saving money for a house for them and their 2-year-old daughter. Galuk said he might have to dip into those savings to pay the bill.

“I know I am working, but for someone not working, what are they supposed to do?” he asked. “... I am not in the greatest situation but not in the worst. I can’t be the only one.”

Concerns have been raised nationally that the cost of testing and treatment might prevent people from seeking care.

Anything that keeps people from getting tested is a concern for public health officials, said Kelsey Cordova, public information officer for the Rock County Public Health Department.

“We can’t investigate and help reduce the virus’ spread unless we know who is infected,” she said.

After Galuk showed symptoms of COVID-19, his girlfriend recommended that he call a doctor.

Galuk doesn’t have a primary care doctor, but his girlfriend was able to reach her doctor, who offered to see Galuk via video chat.

On the video chat, the doctor told Galuk he had flu-like symptoms and should be tested for COVID-19. The doctor referred him to the referral-only drive-through testing site at Mercyhealth North.

He got a call the next Monday saying he had bronchitis, not COVID-19.

Mercyhealth documents shared with The Gazette verify those test results and the billing amount.

Galuk said he received a bill for $2,386 three days after the doctor called him with results.

He got a $596 discount labeled “self-pay, uninsured.” The remaining charges included testing for other infections and diseases. He did not receive treatment at Mercyhealth.

Galuk said he appreciated the care he received, but he wished doctors or other staff would have offered clarity on the cost and types of tests.

“While we cannot speak to any particular patient, we do know that in our research, we have discovered that patients presenting with respiratory symptoms are receiving tests related to pneumonia to rule out all clinical issues,” Bortner said.

“The number of providers it takes to create the drive-through, register the patient, ensure appropriate medical coverage and perform the test has increased as we have moved providers to priority service areas,” Bortner said.

“Therefore, our costs are actually more than they have ever been.”

Mercyhealth announced this week that it was enforcing 10% pay cuts for health system leaders to offset costs from COVID-19 and a $30 million shortfall because of issues with Illinois’ Medicaid system.

Bortner said those with concerns about their bills can reach out to the business office.

“We are very aware of the economic impact this pandemic has had on our community,” Bortner said. 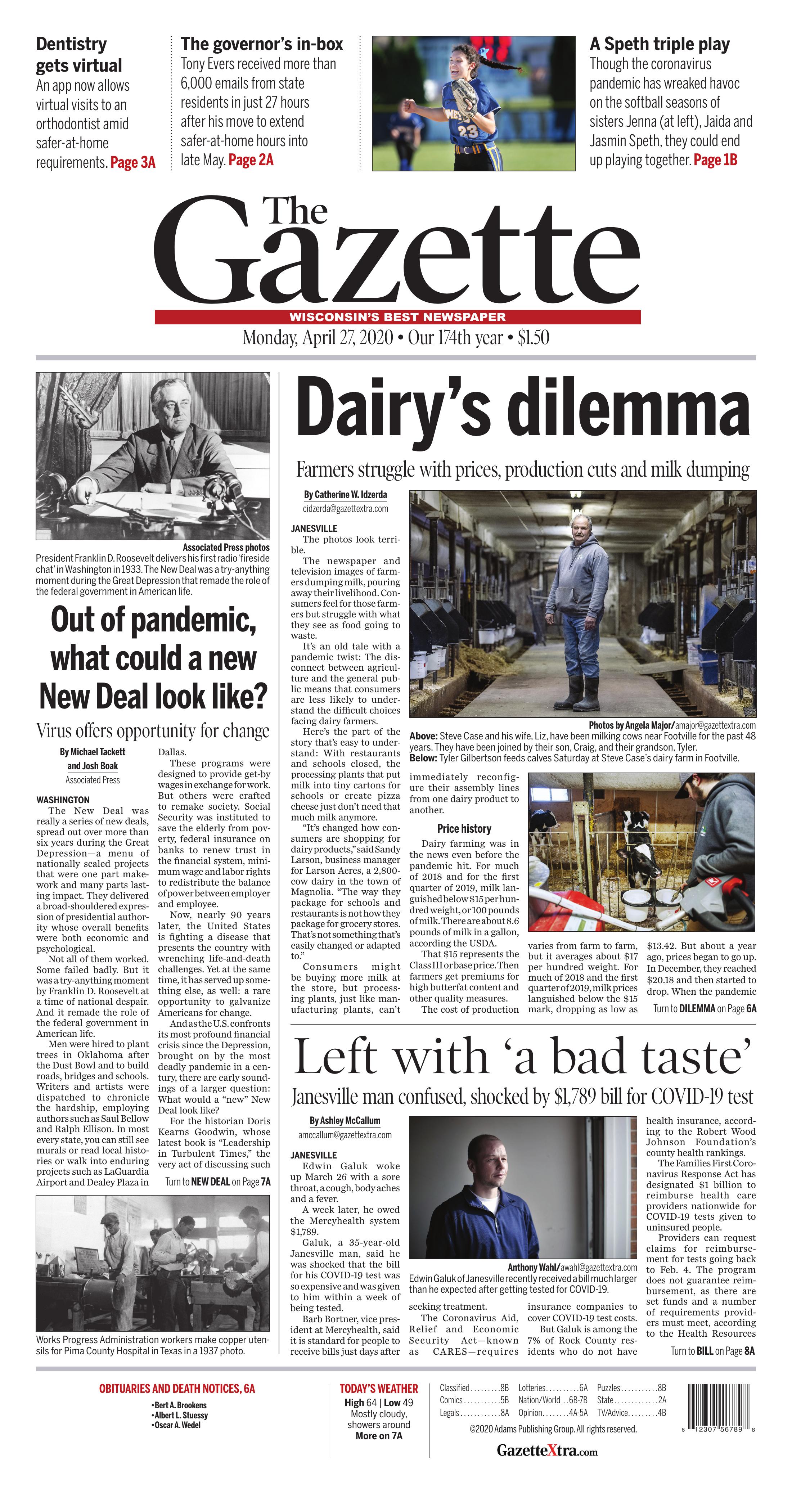