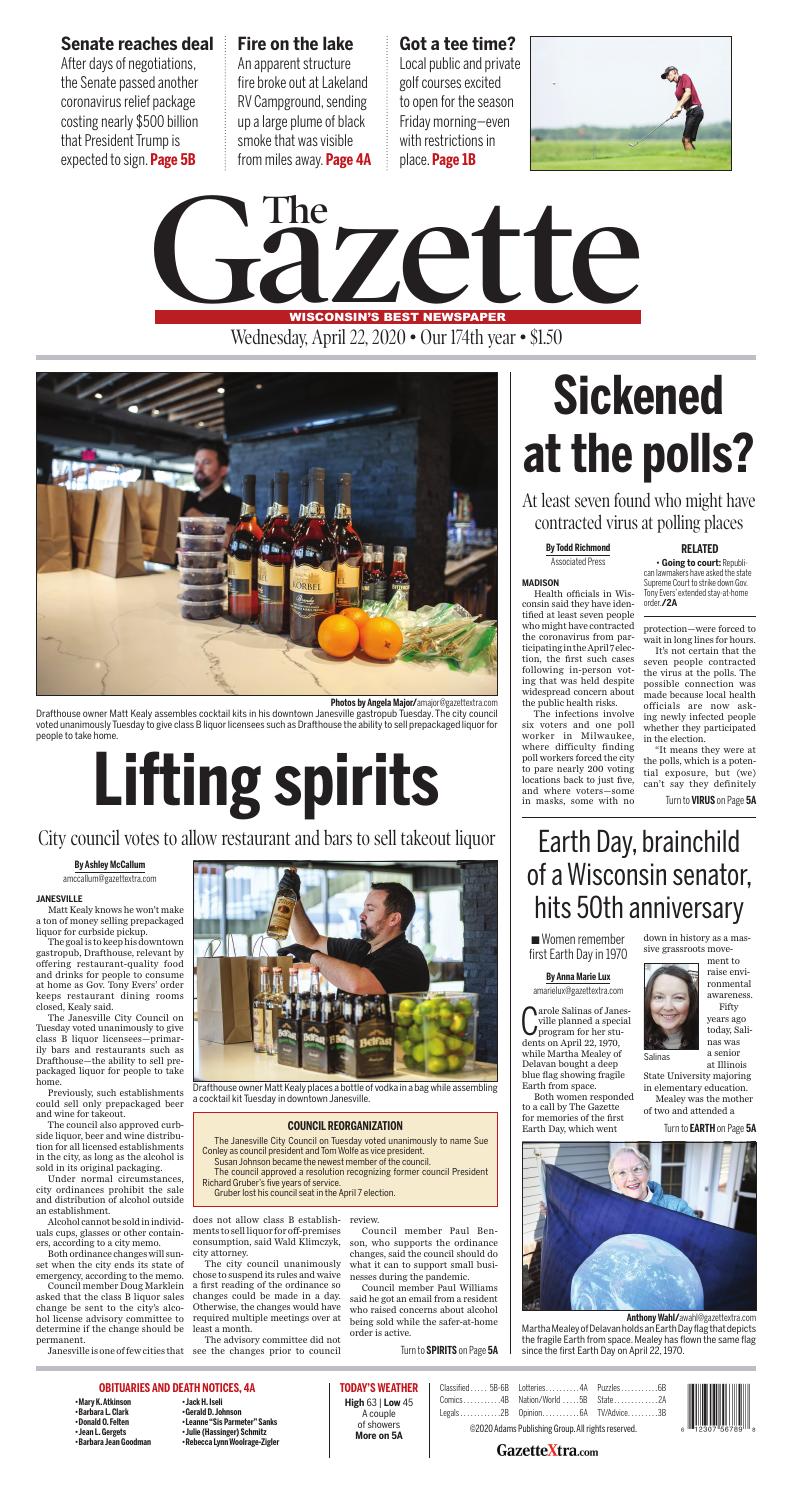 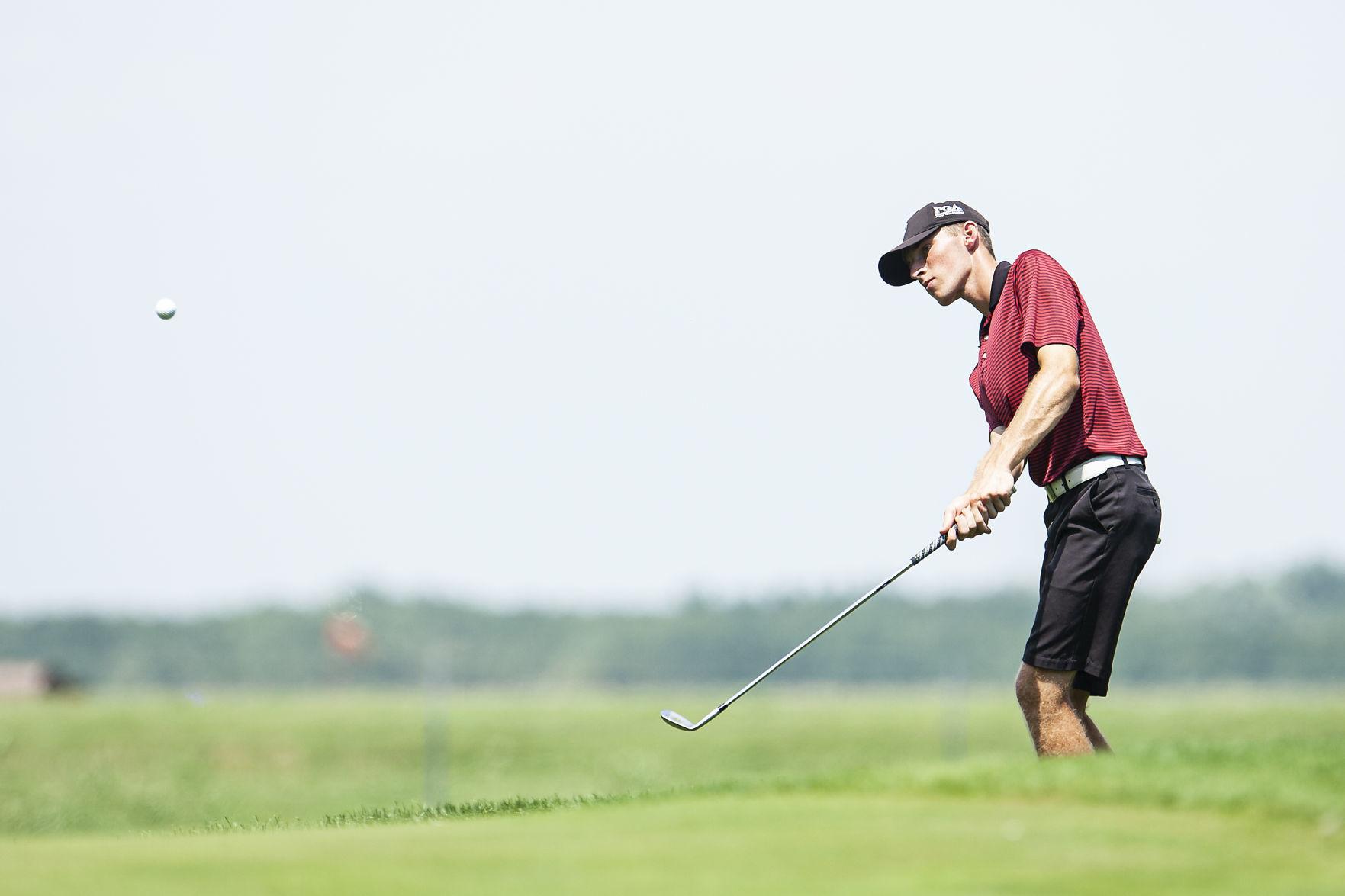 Matt Zimmerman chips his ball toward the green on hole No. 17 during the final round of the Janesville city men’s golf tournament Sunday, July 28, 2019, at Glen Erin Golf Course.

Drafthouse owner Matt Kealy constructs cocktail kits in his downtown Janesville gastropub Tuesday. The city council Tuesday voted unanimously to give class B liquor licensees such as Drafthouse the ability to sell prepackaged liquor for people to take home.

The Janesville City Council on Tuesday voted unanimously to give class B liquor licensees—primarily bars and restaurants such as Drafthouse—the ability to sell prepackaged liquor for people to take home.

Previously, such establishments could sell only prepackaged beer and wine for takeout.

The council also approved curbside liquor, beer and wine distribution for all licensed establishments in the city, as long as the alcohol is sold in its original packaging.

Under normal circumstances, city ordinances prohibit the sale and distribution of alcohol outside an establishment. 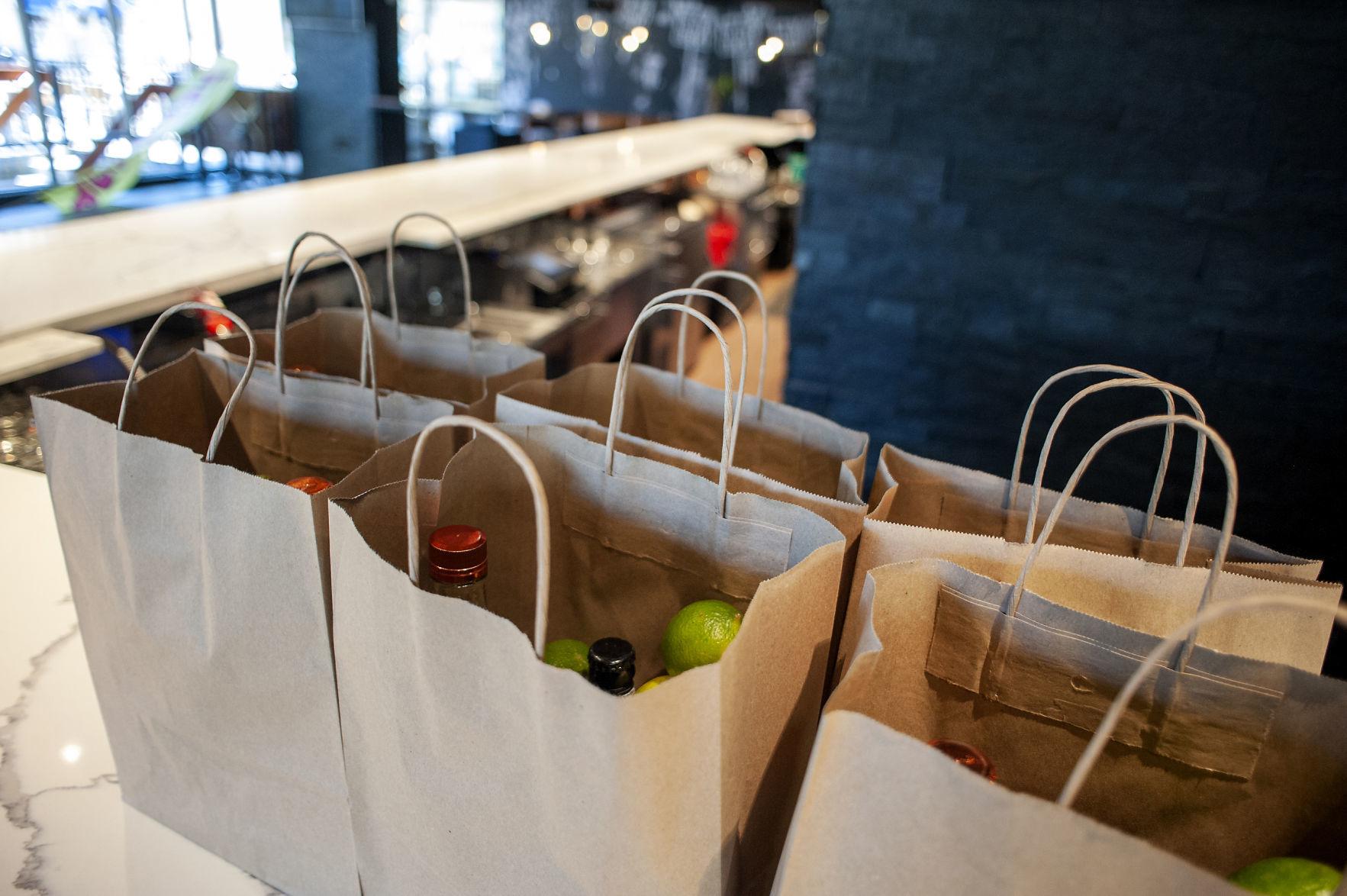 Cocktail kits sit on the bar Tuesday at Drafthouse in downtown Janesville.

Alcohol cannot be sold in individuals cups, glasses or other containers, according to a city memo.

Both ordinance changes will sunset when the city ends its state of emergency, according to the memo.

Council member Doug Marklein asked that the class B liquor sales change be sent to the city’s alcohol license advisory committee to determine if the change should be permanent.

Janesville is one of few cities that does not allow class B establishments to sell liquor for off-premises consumption, said Wald Klimczyk, city attorney.

The city council unanimously chose to suspend its rules and waive a first reading of the ordinance so changes could be made in a day. Otherwise, the changes would have required multiple meetings over at least a month.

The advisory committee did not see the changes prior to council review.

Council member Paul Benson, who supports the ordinance changes, said the council should do what it can to support small businesses during the pandemic.

Council member Paul Williams said he got an email from a resident who raised concerns about alcohol being sold while the safer-at-home order is active.

No one submitted comments to the clerk-treasurer for the public hearing. 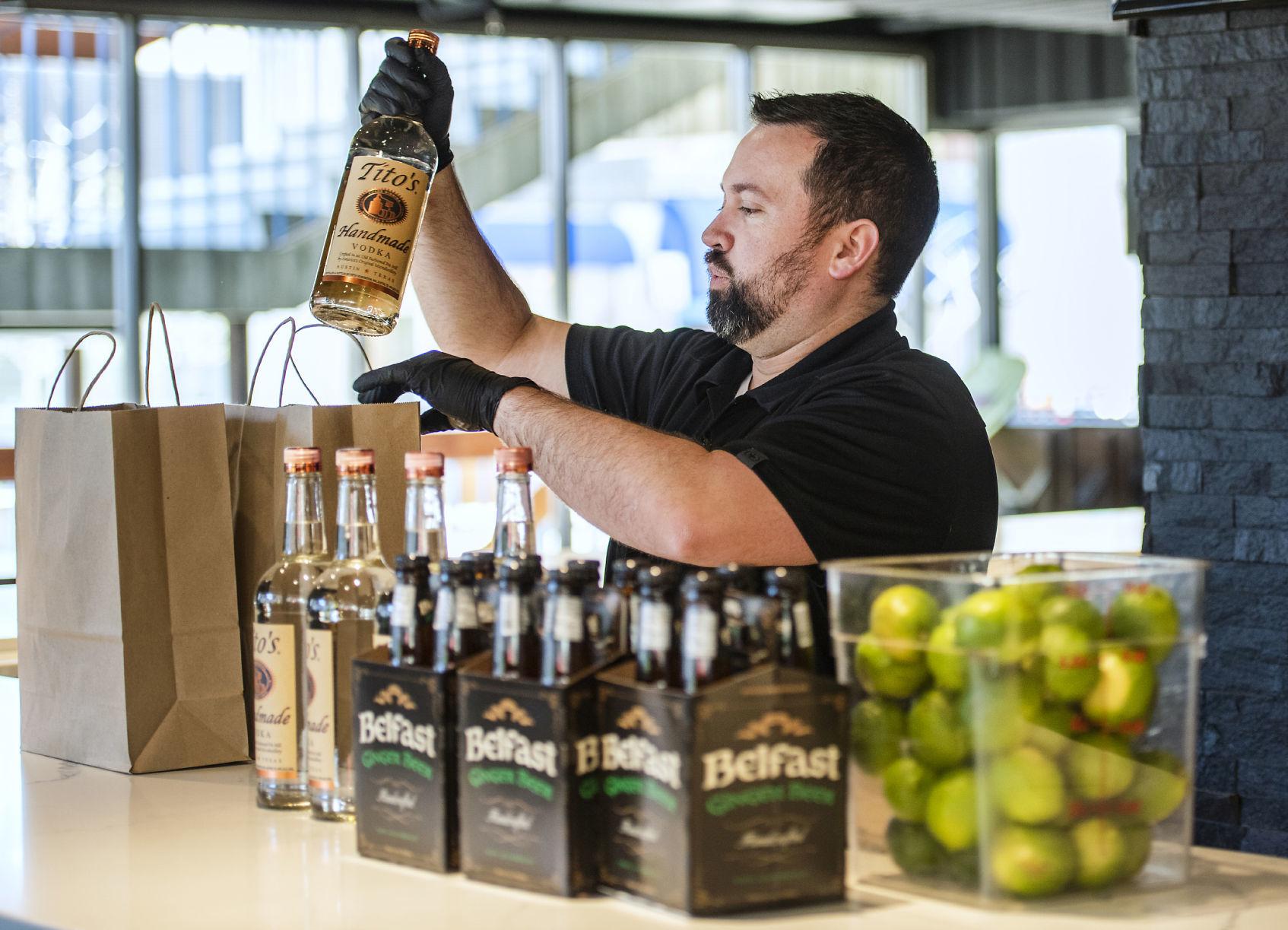 Drafthouse owner Matt Kealy places a bottle of vodka in a bag while assembling a cocktail kit Tuesday in downtown Janesville.

The issue was brought to the council after Kealy and his wife, Hannah Kealy, spent most of the month talking to city representatives and staff about how the changes could help small businesses.

Kealy said he and his staff closed the restaurant for a few days at the beginning of the safer-at-home order to discuss creative ways to attract customers.

The Drafthouse now is trying a modified menu featuring food that is easy to take home and specials on beer and wine, Kealy said.

While brainstorming, Kealy realized he could pare down his liquor inventory by selling people the recipes and ingredients for some of his most popular signature cocktails.

“This was the direction everyone was telling us to take to stay relevant,” he said.

Kealy started selling cocktail kits in early April because he thought it was allowed under state statute, but he soon learned that local ordinances supersede state law.

Someone filed a complaint with Janesville police, and an officer came to the restaurant to tell Kealy he was violating his liquor license. He stopped selling the kits but urged local officials to change the ordinance.

Kealy hopes the liquor sale changes become permanent. People’s dining habits and trends are changing, and restaurants need to evolve with those habits, he said.

Millennials, for example, are more likely to take food home than eat at a restaurant, Kealy said. He also predicts that many people will continue social distancing after safer-at-home orders are rolled back.

Selling liquor from bars and restaurants won’t necessarily make people drink more, but it will change how and where they drink, Kealy said.

“As I joke, we are all becoming bartenders and barbers through this,” he said.

Kealy, who started promoting his cocktail kits on social media Tuesday, said the community has been supportive of local businesses.

Many people have ordered gift cards for friends and family, with messages expressing how they can’t wait to celebrate missed birthdays or occasions after restaurants reopen.

One man said he wanted to help the restaurant and ended up buying 12 bottles of wine from Drafthouse’s wine list.

”We don’t know when we will be coming back, but I realize it is not going to be normal any time soon,” Kealy said.

Susan Johnson became the newest member of the council.

Gruber was voted off the council in the April 7 election.

Martha Mealey of Delavan holds an Earth Day flag that depicts the fragile Earth from space. Mealey has flown the same flag since the first Earth Day on April 22, 1970.

Carole Salinas of Janesville planned a special program for her students on April 22, 1970, while Martha Mealey of Delavan bought a deep blue flag showing fragile Earth from space.

Both women responded to a call by The Gazette for memories of the first Earth Day, which went down in history as a massive grassroots movement to raise environmental awareness.

Fifty years ago today, Salinas was a senior at Illinois State University majoring in elementary education.

Mealey was the mother of two and attended a special Earth Day program with her late husband, Robert.

The women were among 20 million Americans who took part in historic activities to honor the Earth.

Nationally, people participated in protests, demonstrations, speeches and concerts to shine a light on environmental degradation, including polluted air, drinking water and rivers, lakes and streams.

Environmental activist Gaylord Nelson, a Democratic senator from Wisconsin, initiated the day, which sparked what many call the modern environmental movement.

At the time, Salinas was student-teaching in third grade in Ottawa, Illinois. With three other student teachers, she planned a ceremony for the first Earth Day.

On a Friday afternoon, Salinas and students gathered on the school lawn to sing songs, recite poetry and perform a choral reading.

Cub Scouts presented a flag ceremony, and everyone took part in planting a tree.

“At the time, it was just a big assignment we had to do,” Salinas said. “Several years later, I took an environmental education class for elementary teachers as there was a big push for this.”

Throughout her life, Salinas has enjoyed outdoor activities with her family and as a Girl Scout leader.

Now, as a grandparent, she takes her granddaughters to activities at the Welty Environmental Center in Beloit and to programs at Janesville’s Rotary Gardens.

Mealey had a daughter, Sherry, in grade school and a son, Steve, in high school on the first Earth Day.

At a school program, she and her husband bought a special flag with a striking photo of the Earth as seen from space. The first photos of Earth taken during America’s historic Apollo 10 space mission inspired the flag’s design.

This morning, 87-year-old Mealey will fly the flag, just as she has on every Earth Day since 1970.

“I fly it because I care about the Earth,” she said.

Earlier this week, she examined her decades-old banner, which looks like new, and found a wrinkle in it.

She thought about ironing it but realized she could make a hole in the flag if the iron was too hot.

Mealey now lives in a retirement community, but she and her husband lived for many years on Cobb Road in Elkhorn, where they had large vegetable and flower gardens.

One year, they hand-planted 300 small evergreens they bought from the state on their acre property.

“My husband dug all the holes,” Mealey recalled. “My husband loved the Earth.”

When Earth Day is over, she will carefully roll up the flag and tuck it away for another year.

“It is a tradition to fly the flag,” Mealey said. “I’ve never seen one flown anywhere else.” 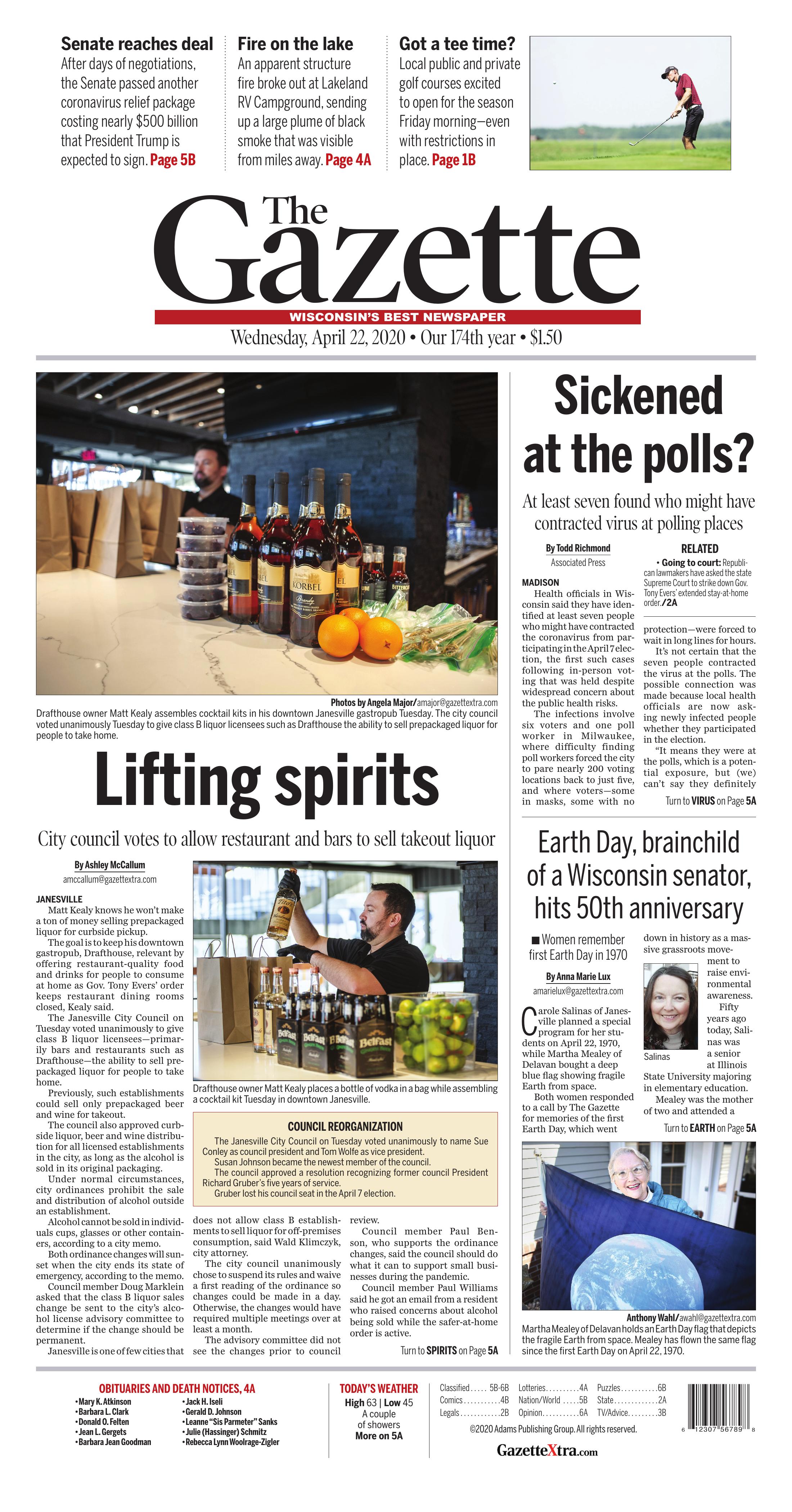