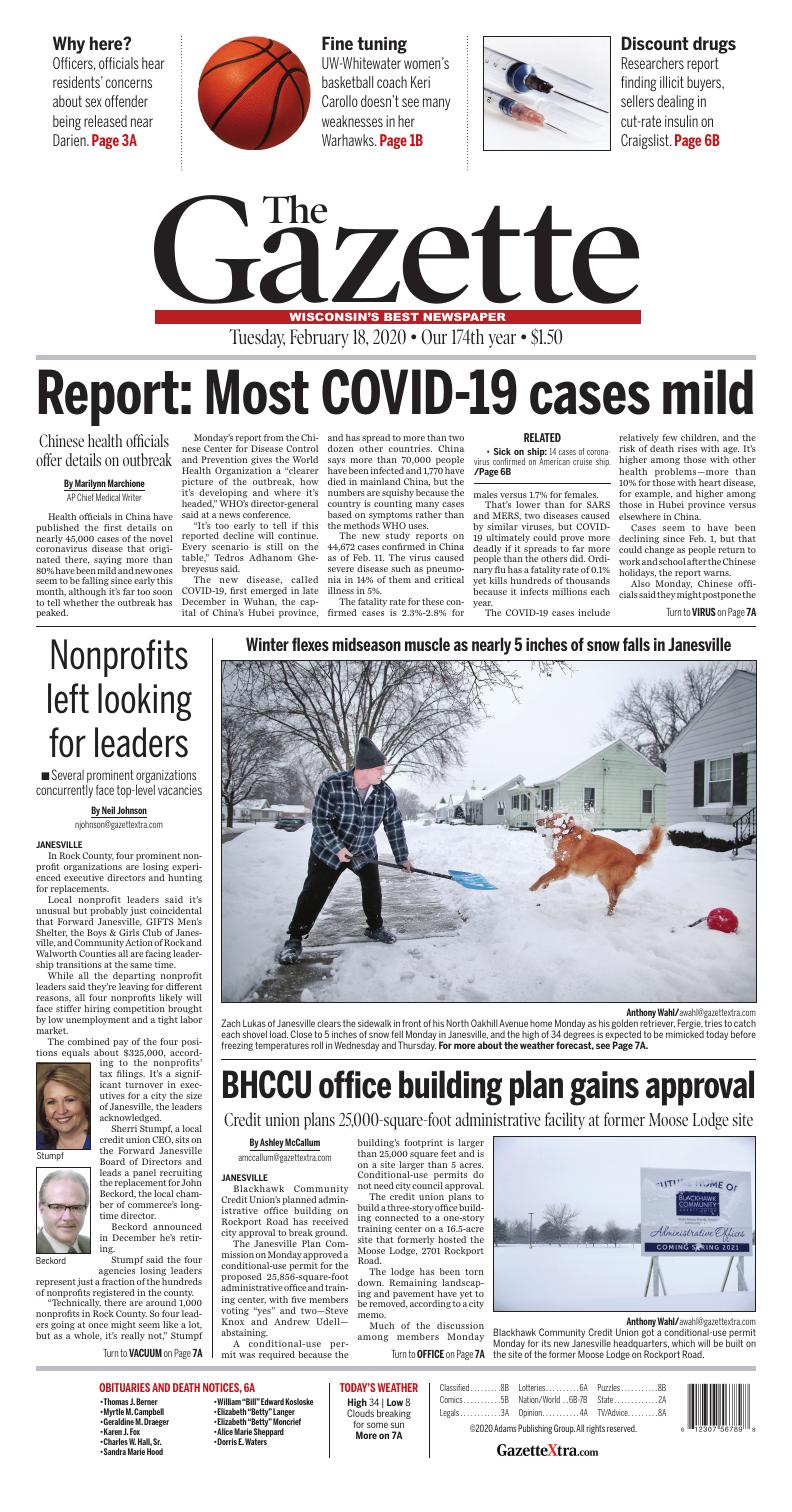 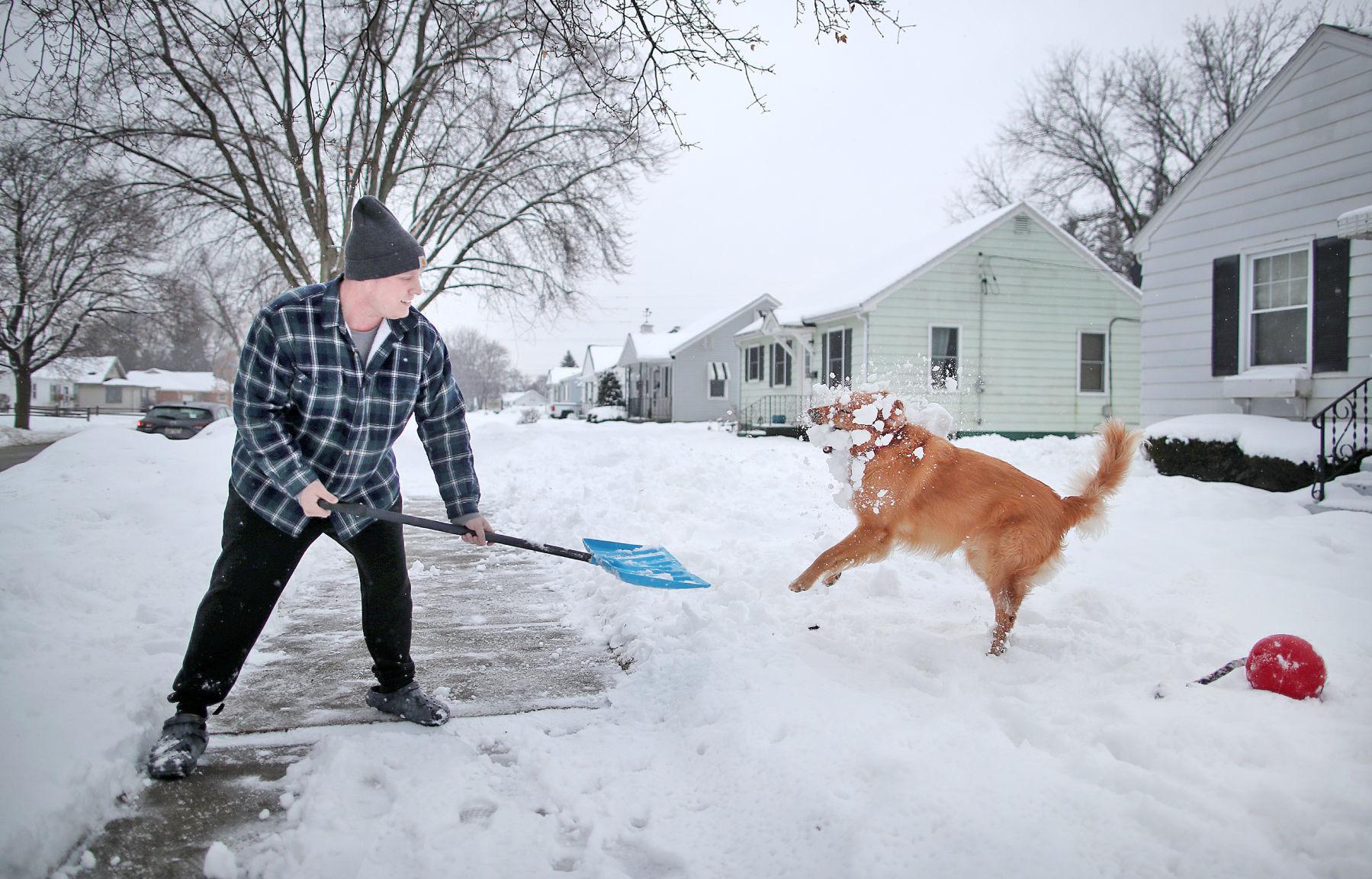 Zach Lukas clears off his sidewalk during Monday's snowfall as his Golden Retriever named Fergie tries to catch each shovel load.

Blackhawk Community Credit Union got a conditional-use permit Monday for its new Janesville headquarters, which will be built on the site of the former Moose Lodge on Rockport Road.

The Janesville Plan Commission on Monday approved a conditional-use permit for the proposed 25,856-square-foot administrative office and training center, with five members voting “yes” and two—Steve Knox and Andrew Udell—abstaining.

The credit union plans to build a three-story office building connected to a one-story training center on a 16.5-acre site that formerly hosted the Moose Lodge, 2701 Rockport Road.

The lodge has been torn down. Remaining landscaping and pavement have yet to be removed, according to a city memo.

Much of the discussion among members Monday focused on the use of the one-story training center.

Zoning dictates that the training center be used for employee training or events held by the credit union or its members. It cannot be used as a banquet hall or rental venue, said Brian Schweigl, senior city planner. 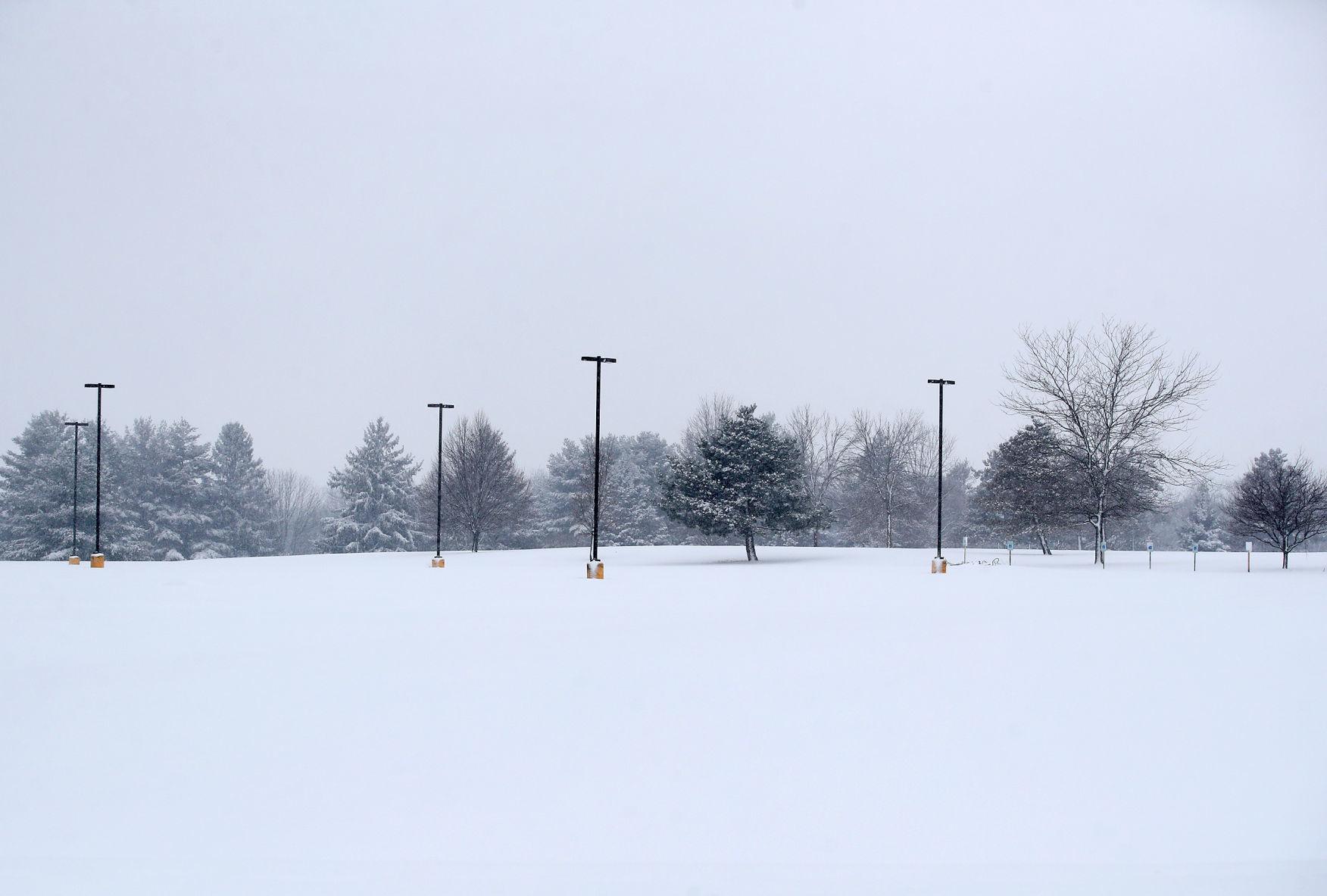 Blackhawk Community Credit Union got a conditional-use permit Monday for its new headquarters on Rockport Road near Rockport Park. The site once was home to the Janesville Moose Lodge.

Plan commission members had questions about the rules in place to prevent the credit union from using the training space for functions that would violate the zoning restrictions.

Schweigl said the simplest answer is the credit union cannot charge rent or collect payment for use of the center.

Credit union CEO Sherri Stumpf said the credit union has no issues with the zoning restrictions.

The space will be used primarily to train employees and for company events, such as the annual meeting and blood drives, Stumpf said.

The credit union offers space for members to host some private events. For example, a group of female members offers a widows support group at one of the offices now, Stumpf said.

Local developer Jim Grafft was the only person to speak during the public hearing.

Grafft, who owns property near the site, said he is excited to have the credit union as a neighbor and supports the project.

The credit union will add a paved multiuse trail on the property that will intersect with an existing public trail, according to the memo.

Plan commission Chairwoman Kathy Voskuil said she liked the idea of adding the trail and integrating the site with the adjacent Rockport Park.

The center is expected to be finished by summer 2021, with groundbreaking this spring.

While all the departing nonprofit leaders said they’re leaving for different reasons, all four nonprofits likely will face stiffer hiring competition brought by low unemployment and a tight labor market.

The combined pay of the four positions equals about $325,000, according to the nonprofits’ tax filings. It’s a significant turnover in executives for a city the size of Janesville, the leaders acknowledged.

Sherri Stumpf, a local credit union CEO, sits on the Forward Janesville Board of Directors and leads a panel recruiting the replacement for John Beckord, the local chamber of commerce’s longtime director.

Stumpf said the four agencies losing leaders represent just a fraction of the hundreds of nonprofits registered in the county.

“Technically, there are around 1,000 nonprofits in Rock County. So four leaders going at once might seem like a lot, but as a whole, it’s really not,” Stumpf said.

Except for Beloit-based Community Action, which lost Executive Director Cecilia Dever in January, outgoing leaders plan to stay in place while their agencies search for their replacements.

Marc Perry, a deputy director at Community Action, said he and other deputies at the agency are sharing duties the director normally handles. Perry said there’s “no outward sign” the agency is temporarily without a director.

Stinski has been director for three years. Stinski told The Gazette she’s leaving her nonprofit because she is experiencing symptoms her doctors believe are signs of multiple sclerosis.

Stinski said she and her small staff work hands-on with children every day in what she called “a job with no bad days, ever.” She said she wanted the Boys & Girls Club to have a leader with more energy than she might have at times if she has a progressive and sometimes debilitating health condition.

Although it ranges wildly based on nonprofit budget size, most Wisconsin nonprofits have average top executive pay of between $75,000 and $115,000, according to a 2017 Gazette investigation of nonprofit leadership pay.

The most recent tax filings available show Stinski was being paid $56,000 a year. Dever at Community Action was being paid $96,000 before she left her social service agency for another job in the private sector.

Recent tax filings show Beckord was being paid $126,000 a year. Beckord told The Gazette last year he won’t officially retire until later this year, perhaps early summer, when he predicted a new director will be hired and in place.

Stinski said she doesn’t believe there’s a flurry of nonprofit executives leaving specifically because of pay.

“Nonprofits are like other industries. They’re competitive for pay, but I don’t think there’s some synchronicity of four nonprofits in town looking for new leaders that tells you, ‘You know, these are horribly underpaid jobs.’ I don’t think that’s the picture,” Stinski said. “Pay isn’t really why a lot of nonprofit people take the job.”

Burton during her eight-year tenure at GIFTS brought a permanent homeless shelter for men at 1025 N. Washington St. along with a slew of programs to guide homeless men back to stability.

Matt Prestil, GIFTS’ board president, said Burton is departing to move to Minnesota, where she’ll be closer to family. He said “no new job was on the line” for Burton.

Stumpf said the job market might be pushing employers to add incentive pay to hire rank-and-file workers, but she believes executive-level hiring tends to work outside trends in the overall job market.

Stumpf said nonprofit boards hunting for new leaders have two main choices: Offer to pay an incoming director more to draw known top talent or offer a lower salary to a leader who is less experienced.

The caveat, she said, is there can be an upfront cost tied to training or acclimating a less experienced director.

She said the topic of pay often comes second to finding candidates who best fit a nonprofit’s mission.

Prestil said he’s aware multiple nonprofits locally are looking for new leaders, but he believes all four are working a similar game plan—a “thoughtful and concerted” search for both national and local candidates. The goal: to find the right new leadership.

“I know we think the recruiting process we’re doing will be quite good, as I’m sure the other (board) searches will be,” Prestil said. “Right now, the good thing is Janesville has a lot to offer. The city as a whole is going the right way. It’s a good opportunity for (nonprofit) folks coming in.”

This report has been amended from an earlier version to reflect Boys & Girls Club Executive Director Sara Stinski's most recent, 2019 pay amount. 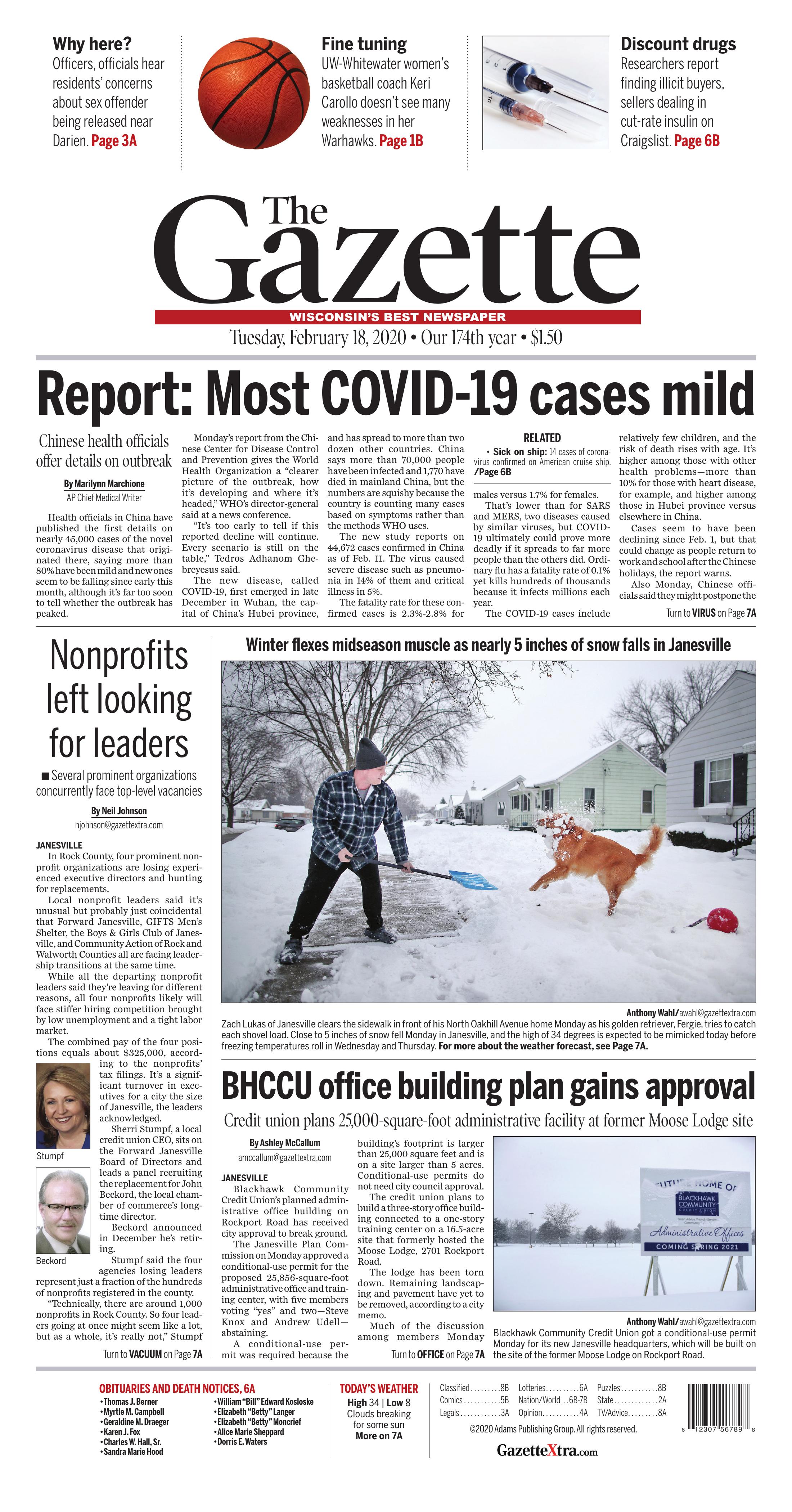