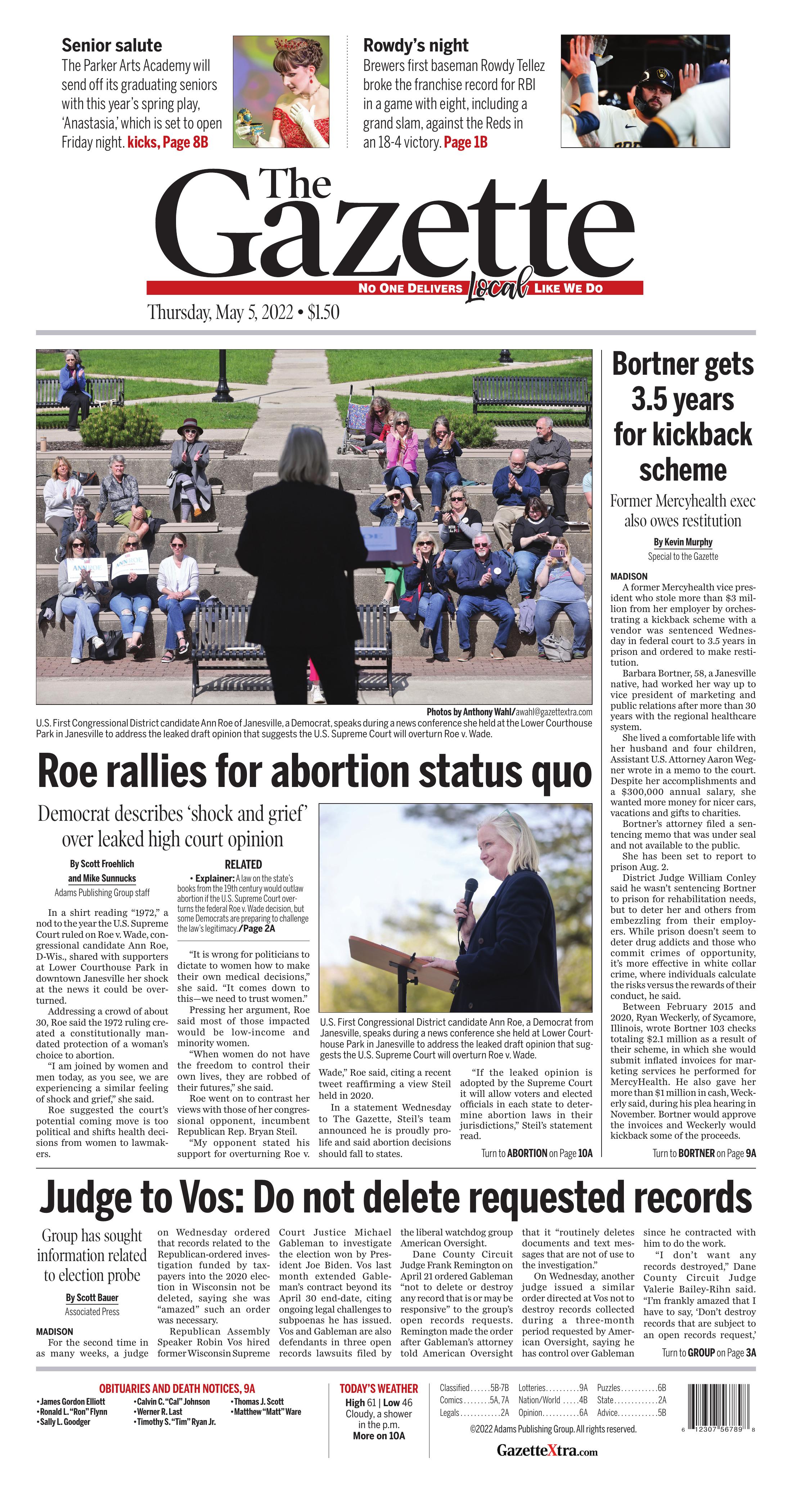 Milwaukee Brewers' Rowdy Tellez is congratulated after hitting a two-run home run during the sixth inning of a baseball game against the Cincinnati Reds Wednesday, May 4, 2022, in Milwaukee.

Nation_world
AP
Judge says not to delete Wisconsin election probe records
For the second time in as many weeks, a judge has ordered that records related to the Republican-ordered investigation funded by taxpayers into the 2020 election in Wisconsin not be deleted, saying she was “amazed” such an order was necessary

For the second time in as many weeks, a judge on Wednesday ordered that records related to the Republican-ordered investigation funded by taxpayers into the 2020 election in Wisconsin not be deleted, saying she was “amazed” such an order was necessary.

Dane County Circuit Judge Frank Remington on April 21 ordered Gableman “not to delete or destroy any record that is or may be responsive” to the group’s open records requests. Remington made the order after Gableman’s attorney told American Oversight that it “routinely deletes documents and text messages that are not of use to the investigation.”

On Wednesday, another judge issued a similar order directed at Vos not to destroy records collected during a three-month period requested by American Oversight, saying he has control over Gableman since he contracted with him to do the work.

“I don’t want any records destroyed,” Dane County Circuit Judge Valerie Bailey-Rihn said. “I’m frankly amazed that I have to say, ‘Don’t destroy records that are subject to an open records request,’ order that to occur. All of us know what the law is.”

Vos’ attorney Ronald Stadler argued that Gableman knows what the open records law requires, and has been ordered by Remington not to destroy records, so it does nothing to order Vos to tell him not to delete records. But the judge said Vos, as the contractor, has responsibility for Gableman and his actions and could be found in contempt if Gableman deleted records.

“I just can’t believe the explanation is ‘We can’t control our contractors,’” Bailey-Rihn said. “That doesn’t seem to be satisfactory to the court. ... They have to control their contractors.”

The nonpartisan Legislative Council, attorneys who advise the Legislature, said in October that deleting such records, even by a state contractor like Gableman, is a violation of Wisconsin law.

Gableman’s attorney, James Bopp, has argued in court filings that the record retention law does not pertain to contractors.

American Oversight attorney Christa Westerberg argued Wednesday that there is evidence that Gableman deleted records that were in his control for the period covered by the open records request between June and Aug. 30 last year. She said American Oversight has received just 27 pages of records from Gableman.

In response to another lawsuit, Vos has produced roughly 20,000 deleted records related to the investigation. The case on Wednesday pertained to records held by Gableman.

Stadler argued that Vos has produced all of the records he has.

Death_list
Obituaries and death notices for May 5, 2022

A former Mercyhealth vice president who stole more than $3 million from her employer by orchestrating a kickback scheme with a vendor was sentenced Wednesday in federal court to 3.5 years in prison and ordered to make restitution.

Barbara Bortner, 58, a Janesville native, had worked her way up to vice president of marketing and public relations after more than 30 years with the regional healthcare system.

She lived a comfortable life with her husband and four children, Assistant U.S. Attorney Aaron Wegner wrote in a memo to the court. Despite her accomplishments and a $300,000 annual salary, she wanted more money for nicer cars, vacations and gifts to charities.

Former Mercyheath marketing chief Barb Bortner has been found guilty in a plea deal tied to prosecution of a fraudulent billing invoice and kickback scheme she and an Illinois businessman used to steal of more than $3 million in marketing payments.

Bortner’s attorney filed a sentencing memo that was under seal and not available to the public.

She has been set to report to prison Aug. 2.

District Judge William Conley said he wasn’t sentencing Bortner to prison for rehabilitation needs, but to deter her and others from embezzling from their employers. While prison doesn’t seem to deter drug addicts and those who commit crimes of opportunity, it’s more effective in white collar crime, where individuals calculate the risks versus the rewards of their conduct, he said.

Between February 2015 and 2020, Ryan Weckerly, of Sycamore, Illinois, wrote Bortner 103 checks totaling $2.1 million as a result of their scheme, in which she would submit inflated invoices for marketing services he performed for MercyHealth. He also gave her more than $1 million in cash, Weckerly said, during his plea hearing in November. Bortner would approve the invoices and Weckerly would kickback some of the proceeds.

A man who gave kickbacks to a Mercyhealth System vice president that resulted in a $3 million loss to the Janesville-based medical provider pleaded guilty Thursday to wire fraud and providing false information on a tax form.

In exchange, Bortner agreed she would continue to use Weckerly’s Morningstar Media Group as Mercyhealth’s main marketing firm.

The scheme was designed to allow Bortner to live more lavishly, Wegner wrote, adding that as the scheme continued, Bortner requested even more money from Weckerly. Bortner’s attorney, Thomas Brown, disputed that claim.

Weckerly is to be sentenced on May 17 for wire fraud.

Bortner had fraudulently profited from the kickback scheme through 2020 at which time, Mercyhealth experienced financial losses due to the COVID-19 pandemic. The nonprofit healthcare provider was forced to furlough employees and scale back its medical services, Wegner wrote.

An undisclosed number of furloughed employees will not be paid at Mercyhealth facilities in Wisconsin and Illinois, according to an email from Mercyhealth President Javon Bea to employees.

Mercyhealth also incurred legal expenses and audit fees as a result of Bortner’s crime. Publicity of Bortner’s theft has also made it more difficult for Mercyhealth to recruit key leadership positions and repair its reputation in the community, Wegner wrote.

The IRS discovered the kickback scheme when it audited Weckerly’s tax returns in 2019. The IRS concluded that Weckerly underreported his income and misrepresented personal expenses as legitimate business expenses.

Although the statutory penalties for Bortner’s offenses exceeded 20 years in prison, she faced an advisory guideline sentencing range of 51-63 months. Sentencing guidelines factor in the amount of loss, her lack of prior convictions and her guilty plea to theft and tax evasion charges.

Wegner recommended a 4.5-year sentence, writing that Bortner, “callously exploited her position and used it to benefit herself financially at the expense of Mercyhealth’s mission and reputation in the community.”

Bortner also didn’t come clean about her arrangement with Weckerly during a July 2019 IRS interview, Wegner wrote, adding that she instead continued to approve inflated invoices for another 11 months and about $600,000 in kickback income.

The government and Bortner have agreed that she owes the IRS $777,803 for the unreported income.

Bortner has liquidated retirement accounts, and her attorney holds $1.837 million pledged for restitution to MercyHealth.

Bortner, now of Milton, apologized in court for hurting her family, friends, Mercyhealth and the community.

“I’m still trying to understand why I did what I did,” she told Conley.

She said she had an image of herself as “super successful” person who wanted to help others but it “got out of hand.”

Bortner said she is “ashamed and embarrassed” by her behavior and regrets that she and her family will live with this shame forever.

“I look for a second chance to make a difference,” she said.

Conley said Bortner doesn’t have to prove to her family and friends that this crime defines her, and she can prove her worth to the community. She has been helping convicts find employment and has contributed to many charities.

Conley added that Bortner enjoys a great deal of support from individuals and said he seldom sees the number of letters her backers wrote to the court.

Although she was spending $3,000 a month several years ago while addicted to cocaine, she stopped abusing the drug when her husband found out, Conley said.

The judge attributed Bortner’s crime not to drugs or gambling but to “greed.”

Her salary put her in the top 5% of “earners” in the U.S. and including the embezzled funds, she was in the top 1%, Conley said.

Mercyhealth didn’t respond before deadline to a request for comment on the case.

This story was updated to correct Barbara Bortner’s age. She is 58.