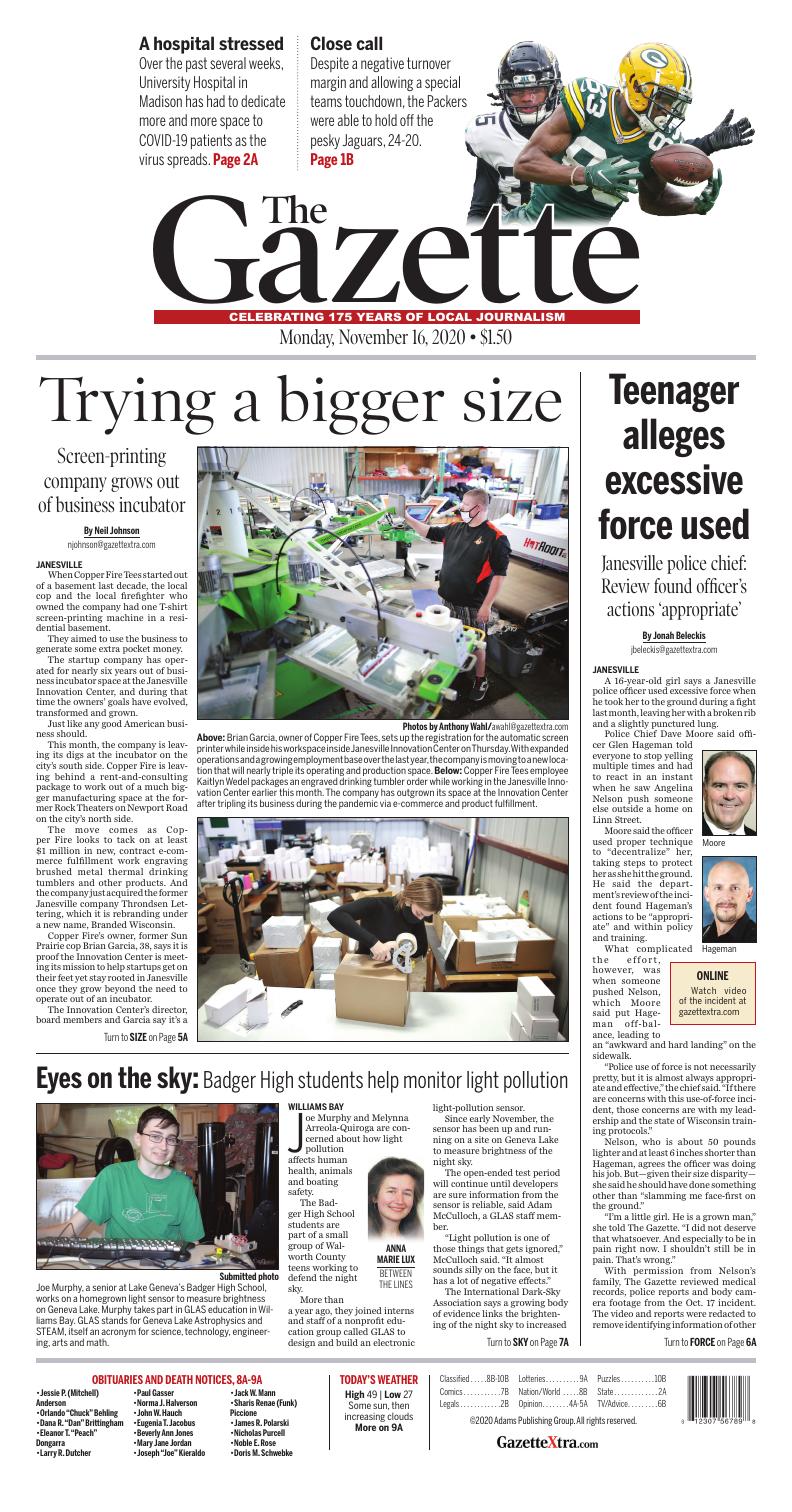 Copper Fire Tees employee Kaitlyn Wedel packages an engraved drinking tumbler order while working in the Janesville Innovation Center earlier this month. The company has outgrown its space at the Innovation Center after tripling its business during the pandemic via e-commerce and product fulfillment.

Located in downtown Janesville, 21 West Collection is a subsidiary of Copper Fire Tees and carries some of the screen printed clothing and metal engraved objects produced their location in the Janesville Innovation Center.

Copper Fire Tees employee Zach Bergs removes a tumbler from a laser engraving machine while working inside the Janesville Innovation Center on Thursday. With expanded operations and a growing employment base, the company is moving to a new location that will nearly triple the operating and production space.

When Copper Fire Tees started out of a basement last decade, the local cop and the local firefighter who owned the company had one T-shirt screen-printing machine in a residential basement.

They aimed to use the business to generate some extra pocket money.

The startup company has operated for nearly six years out of business incubator space at the Janesville Innovation Center, and during that time the owners’ goals have evolved, transformed and grown.

This month, the company is leaving its digs at the incubator on the city’s south side. Copper Fire is leaving behind a rent-and-consulting package to work out of a much bigger manufacturing space at the former Rock Theaters on Newport Road on the city’s north side.

The move comes as Copper Fire looks to tack on at least $1 million in new, contract e-commerce fulfillment work engraving brushed metal thermal drinking tumblers and other products. And the company just acquired the former Janesville company Throndsen Lettering, which it is rebranding under a new name, Branded Wisconsin. 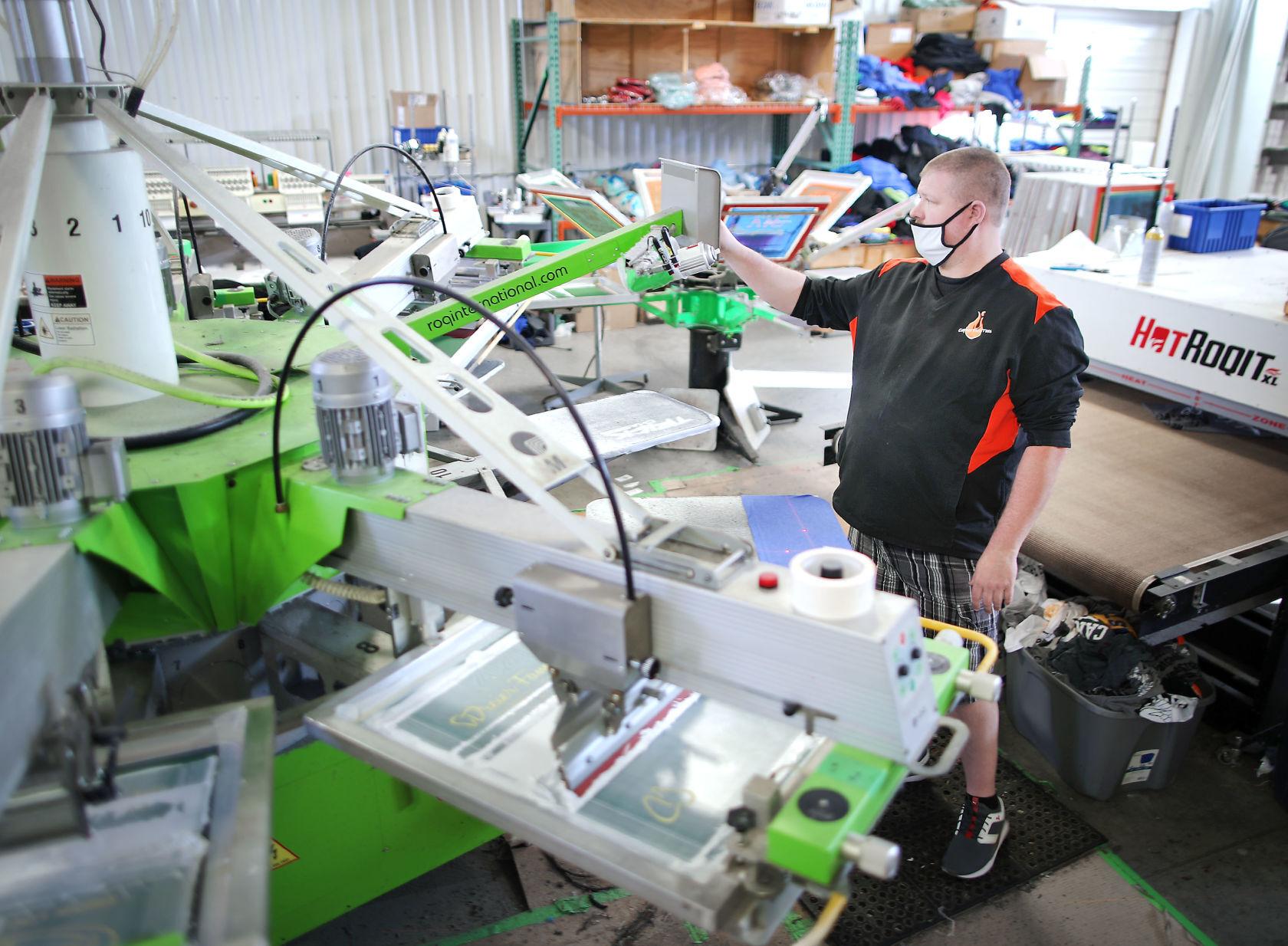 Brian Garcia, owner of Copper Fire Tees, sets up the registration for the automatic screen printer while inside their workspace inside Janesville Innovation Center on Thursday. With expanded operations and a growing employment base over the last year, the company is moving to a new location that will nearly triple its operating and production space.

Copper Fire’s owner, former Sun Prairie cop Brian Garcia, 38, says it is proof the Innovation Center is meeting its mission to help startups get on their feet yet stay rooted in Janesville once they grow beyond the need to operate out of an incubator.

The Innovation Center’s director, board members and Garcia say it’s a case-in-point that startups can make it in Janesville—even during an international pandemic and amid a sputtering national economy.

In spring and summer, during the height of nationwide and statewide COVID shutdowns, Copper Fire was knee deep in an expansion that came under a laser-engraving contract for an e-commerce company on the East Coast.

“In the two years we’ve done this, we’ve literally shipped hundreds of orders to people right here in Janesville. And I guarantee you, those people have no idea that the engraved products were made here in town, a few miles down the road,” Garcia said.

Gale Price, the city’s economic development director, said contract fulfillment work such as Copper Fire’s, particularly for e-commerce companies, has been a major growing industry and a rare bright spot in the COVID-19 economy.

Garcia’s contract bars him from naming the metal drinking tumbler maker he engraves and ships orders for, but he said at one point in the summer months, Copper Fire was shipping out thousands of engraved drinking tumblers a day. 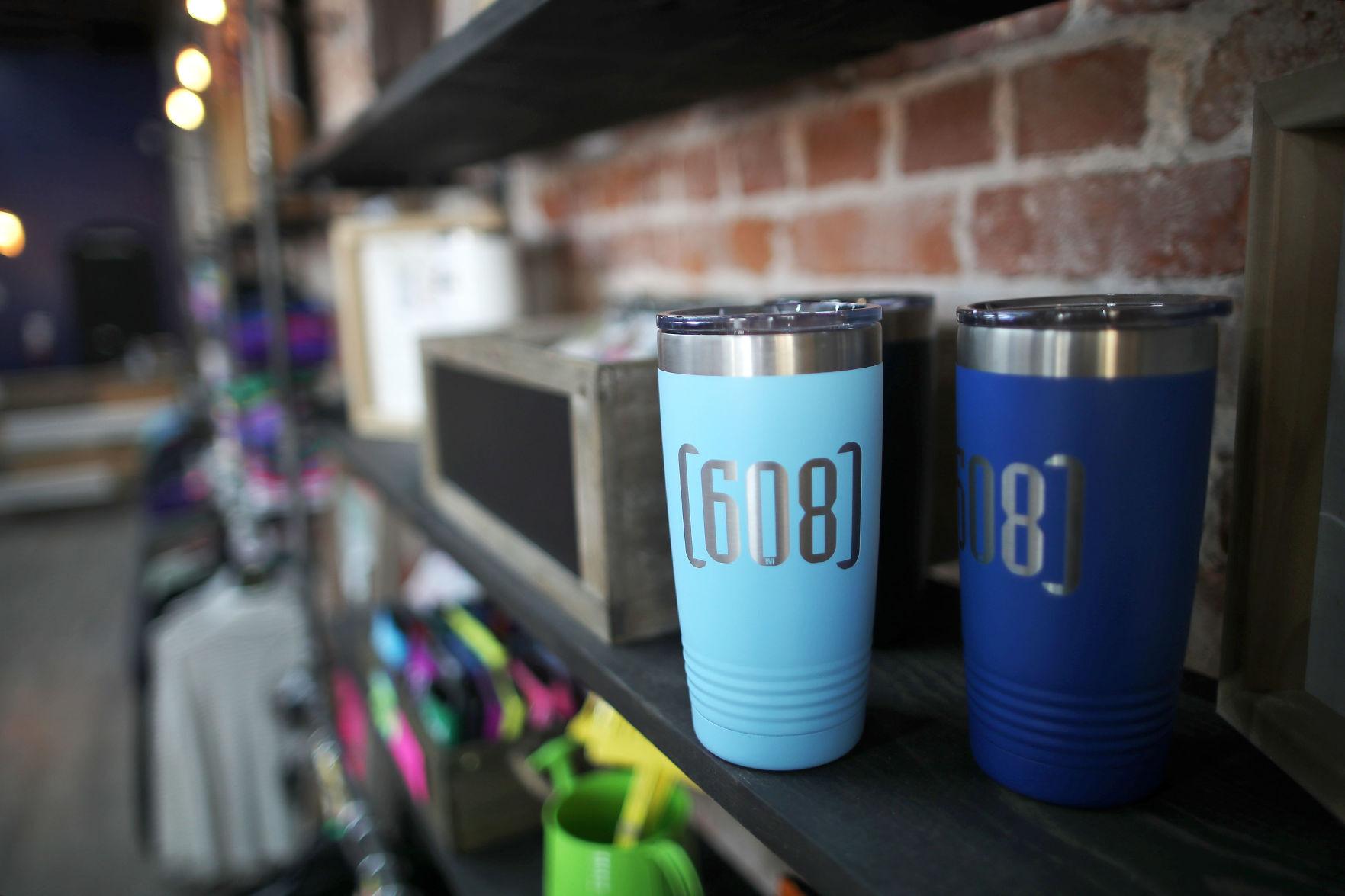 Garcia said the expansion over the last year has filled space in Copper Fire’s 5,200 square feet of leased space in the Innovation Center. The company looks to grow into a 13,000-square-foot space in Jim Grafft’s former Rock Theatres building, which was last occupied by Marling Lumber.

The conversion of that space is going on now, and move-in could come in just a few weeks. It would be a fitting punctuation to a year in which Copper Fire’s sales have mushroomed and its employee ranks have boomed from three full-time workers to about 15 employees—largely thanks to e-commerce fulfillment, online shopping and emerging contracts with manufacturing brands.

But the company also is quickly becoming a go-to vendor and contractor for screen-printed and embroidered apparel for local small businesses companies. During a recent tour of Copper Fire’s manufacturing space in the Innovation Center, the company had orders shipping out for T-shirts, athletic zip-up jackets and other apparel for a local dentist’s office and an area sheriff’s office, among other designs.

Some services the Innovation Center provided Garcia, he said, wouldn’t have been available through a lease with a traditional real estate holding company.

He said help from the Innovation Center included adjusting and transforming manufacturing space in the center for Garcia’s rapidly expanding production lines, and help on legal contracts to buy the former Throndsen Lettering—including Throndsen’s thousands of archived apparel designs for its individual clients.

The experience has been a breath of fresh air for Garcia a former employee at Lear Corp., a Janesville manufacturer and auto parts supplier that imploded when its biggest client, General Motors, pulled the plug on its Janesville assembly plant in 2009.

“A lot of people that have never heard of the Innovation Center. They drive by it, and they see it, and they just think it’s just another industrial building. They don’t understand the whole concept and the programs that’s behind it,” Garcia said. “In the small business world, the Innovation Center is the gem of Janesville. I don’t think it gets enough praise, but I think eventually it will.”

The Innovation Center has graduated other manufacturers, including the startup Simply Solutions, a health product and CBD and hemp product maker that now operates out of a bigger facility on the city’s south side.

The Innovation Center was paid in part through a tax-incentive deal through the city, but in 2018 the city stopped subsidizing the center based on an earlier agreement. It operates largely off tenant rent revenue, which the Innovation Center will be short on in the interim while it hammers out deals with new tenants.

The center is now looking to fill vacancies left by companies such as Copper Fire. Mike Mathews, the Innovation Center’s director, said the incubator has a few new local companies who are poised to move in over this winter.

Mathews said the Innovation Center has requested the city sink in some spending to help it bridge the temporary funding gap.

That’s where the company will market some of its own screen-printed and embroidered apparel, plus other products made regionally.

Garcia hopes local companies who do business with his print shop connect the dots in his expansion. He wants more startup businesses to know a local, grassroots company formed by a former cop has launched itself into not one but three emerging Janesville businesses, thanks in part to help from the Innovation Center.

“I was a cop for seven years. I’m a very simple creature. I’m very loyal. And if somebody does something for me, I think it’s important that you don’t just say, ‘Oh hey. Thanks for the four years of a great deal, and by the way, we’re out of here,’” Garcia said.

The Badger High School students are part of a small group of Walworth County teens working to defend the night sky.

More than a year ago, they joined interns and staff of a nonprofit education group called GLAS to design and build an electronic light-pollution sensor.

Since early November, the sensor has been up and running on a site on Geneva Lake to measure brightness of the night sky.

The open-ended test period will continue until developers are sure information from the sensor is reliable, said Adam McCulloch, a GLAS staff member.

“Light pollution is one of those things that gets ignored,” McCulloch said. “It almost sounds silly on the face, but it has a lot of negative effects.”

The International Dark-Sky Association says a growing body of evidence links the brightening of the night sky to increased energy consumption, disruption of the ecosystem and wildlife, and harm to human health.

Kate Meredith, president and director of GLAS, said GLAS started the student-led project to provide reliable information about light pollution in the Geneva Lake area and to educate the public.

Staff members of Yerkes Observatory created the group to continue a number of educational programs at Yerkes after it closed in October 2018. Among them was the Geneva Lake Dark Sky Initiative, which encourages sensible public and private outdoor lighting.

Meredith explained that using a hand-held meter to measure brightness on Geneva Lake would require someone to walk on the lakeshore path at night to take readings.

But students from Elkhorn, Delavan, Williams Bay and Lake Geneva came up with a better way.

The sensor, which can be operated remotely, automatically posts readings of brightness to a website, also developed by the students. With a lens that points skyward, the sensor collects data from a 60-degree arc of sky and uploads it to a computer.

Eventually, the project hopes to have up to 20 sensors taking light-pollution readings around the lake.

“One of our goals is to have a page where homeowners can go and see what readings were from the previous night,” McCulloch said.

Murphy, a senior, was involved in designing, building and programming the sensor.

“It has given me a lot of insight into the world of engineering and design,” he said.

Murphy plans to pursue a career in mechanical or electrical engineering.

Arreola-Quiroga, a junior, was mostly involved in public outreach.

“I help manage social media accounts and try to create bilingual content to increase accessibility for Spanish-speaking members in our community,” the 16-year-old said.

Because of the project, Arreola-Quiroga has learned how light pollution affects communities.

“Fortunately, we can all reduce light pollution by taking small steps to improve our health, environment, wildlife, bank accounts and the night sky,” she said. “Light pollution, which is excessive, obtrusive or misdirected light, can be replaced by a more efficient light source.”

“We have so many people in the community supporting this project,” Meredith said. “There are professionals working on the problem worldwide, but this is a student-run project. The ultimate dream is that it will help us understand our planet and human health. It doesn’t get better than that.”