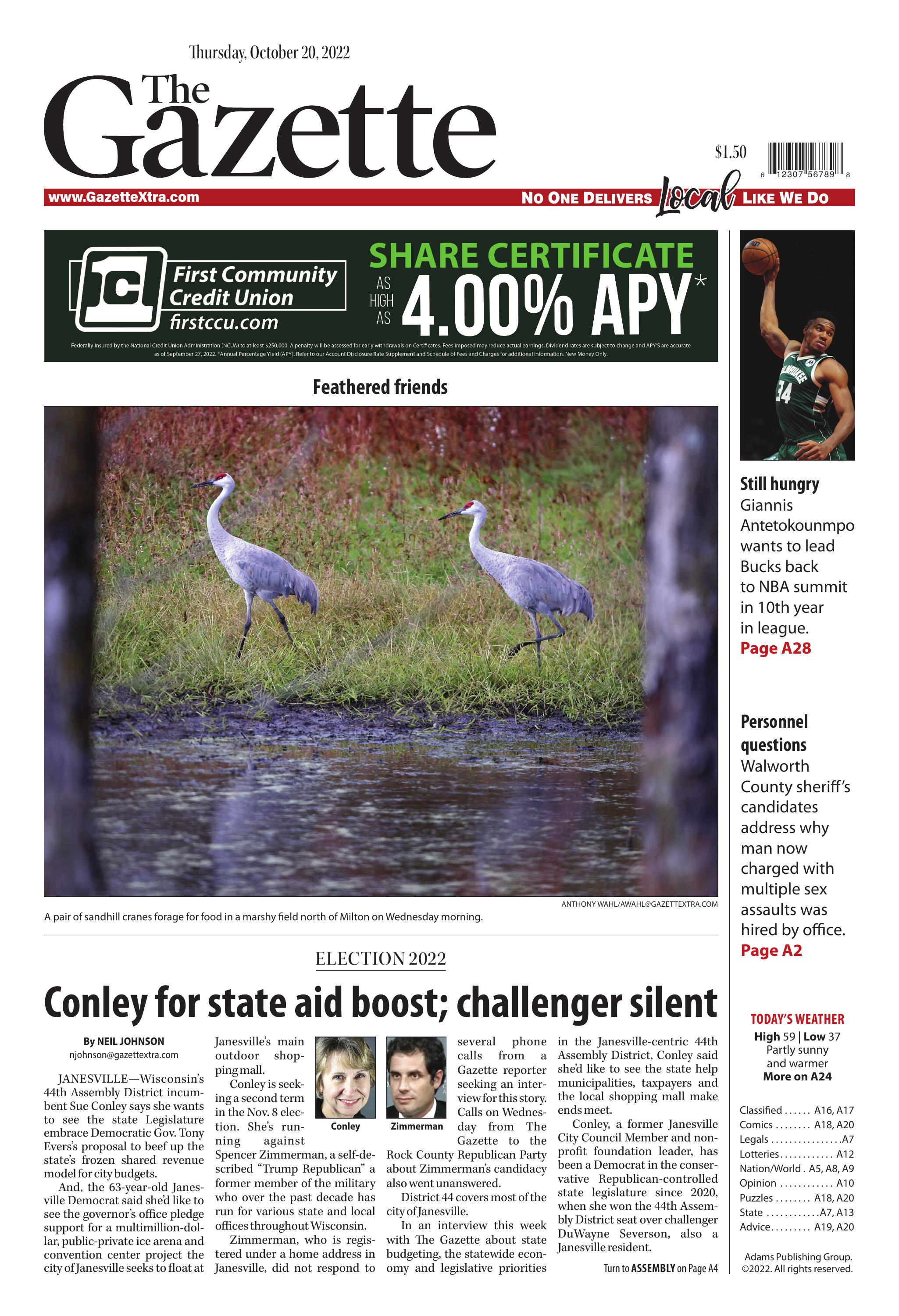 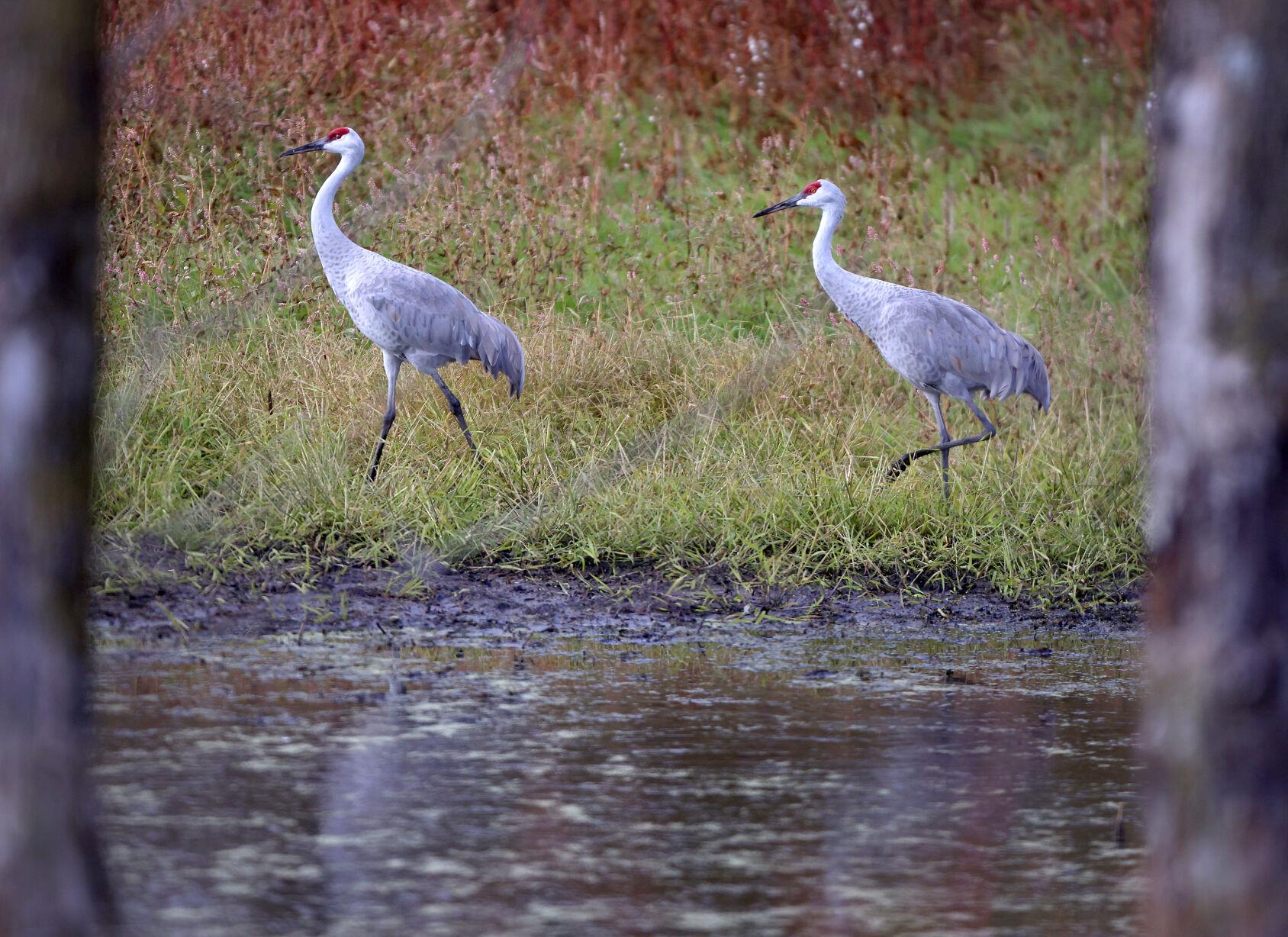 A pair of sandhill cranes forage for food in a marshy field north of Milton on Wednesday morning.

And, the 63-year-old Janesville Democrat said she’d like to see the governor’s office pledge support for a multimillion-dollar, public-private ice arena and convention center project the city of Janesville seeks to float at Janesville’s main outdoor shopping mall.

Conley is seeking a second term in the Nov. 8 election. She’s running against Spencer Zimmerman, a self-described “Trump Republican” a former member of the military who over the past decade has run for various state and local offices throughout Wisconsin.

Zimmerman, who is registered under a home address in Janesville, did not respond to several phone calls from a Gazette reporter seeking an interview for this story. Calls on Wednesday from The Gazette to the Rock County Republican Party about Zimmerman’s candidacy also went unanswered.

District 44 covers most of the city of Janesville.

In an interview this week with The Gazette about state budgeting, the statewide economy and legislative priorities in the Janesville-centric 44th Assembly District, Conley said she’d like to see the state help municipalities, taxpayers and the local shopping mall make ends meet.

Conley, a former Janesville City Council Member and nonprofit foundation leader, has been a Democrat in the conservative Republican-controlled state legislature since 2020, when she won the 44th Assembly District seat over challenger DuWayne Severson, also a Janesville resident.

Conley said both Democrats and Republicans have been against a “brick wall” for years trying to get the state to change its state shared revenue model, which limits local tax levy increases and state aid to based on a formula that for years has been determined only by a base calculation of inflation and new property value tied to local construction property development.

Local and state officials have said for years the funding model leaves municipalities short of revenue and with few tools to cover growing budget gaps that for some municipalities are a result.

A shortfall in state shared revenue to the city of Janesville played a part in the city’s proposal this fall to dip nearly $1 million into its rainy-day fund. That’s to cover a looming budget gap in 2023 that among other things would put a pinch spending on police staffing.

That’s despite the fact Janesville has seen growth in population and property value. Conley said the model for how the state kicks in aid remains “frozen” using “outdated” local data from when rules were put in place years ago.

“It’s clear that even when municipalities do everything right, we still fall farther behind in state shared revenue because of the antiquated formula,” Conley said. “The current, quote unquote, formula is unworkable. We should toss it out and start fresh.”

Conley said she’d support a proposal by Evers in the next biennial budget to tie state aid shares to municipalities to a 4% inflation model—a step up from a model that now increases state aid based on a base inflation rate of 1.5%.

She also said she’d support another, related measure by Evers to allow municipalities to enact a half-cent local sales tax through local voter referendums. Evers floated that proposal in his last two-year state budget, but it got shot down by the state’s Republican-controlled legislature.

Conley said she’d also support a “pledge” by Gov. Evers for state income tax relief for middle-class consumers who’ve been stung by inflation. She said she’d also want to use some of the state’s record, $4-billion revenue surplus to public education funding, which she said hasn’t seen increases in recent years in state aid per student.

One local concern Conley said she’d like to see find a platform at the state level is the proposed, public-private plan to build a 130,000-square-foot ice arena, indoor sports complex and convention center on the footprint of the former Sears store at Uptown Janesville, the city’s struggling indoor shopping mall.

The project’s initial designs came in more than $20 million above early estimates, and planning has been mired in an ad-hoc city committee for weeks as paid consultants and city officials work through redesigns aimed at slashing the project’s sticker price.

The city and a private-side friends group that supports the ice arena plan have asked Evers to allocate $10 million in COVID-19 rescue funding to help pay for the project.

Conley said she aims to push for Gov. Evers to allocate funding for the project, saying that the project could lure major regional conferences and sports tournaments, both which would help the mall and the local economy overall via an influx of tourism spending.

Conley told The Gazette that she hopes to hear Zimmerman sound off publicly before the election.

Zimmerman, who at times in the past had run for public office in different parts of the state, has characterized himself as a conservative and as a “Trump Republican,” according to ballot registries and his own social media pages and campaign website for his various runs at the state office.

Zimmerman ran unsuccessfully in June 2021 in a 10-way special Republican primary for the 37th Assembly District, which serves Dodge, Columbia and Jefferson counties.

Zimmerman also ran an unsuccessful race against Rich Bostwick for the Rock County Board of Supervisors in 2020 on a platform he then said relied on reduction of county debt, according to a response to a Gazette campaign questionnaire from 2020.

According to online campaign finance reports, Zimmerman had raised $7,559 for his campaign through August 31. Most of that money came from the Republican Assembly Campaign Committee.

Most recently, in late September, Zimmerman announced on his Facebook page that he still had campaign yard signs available.