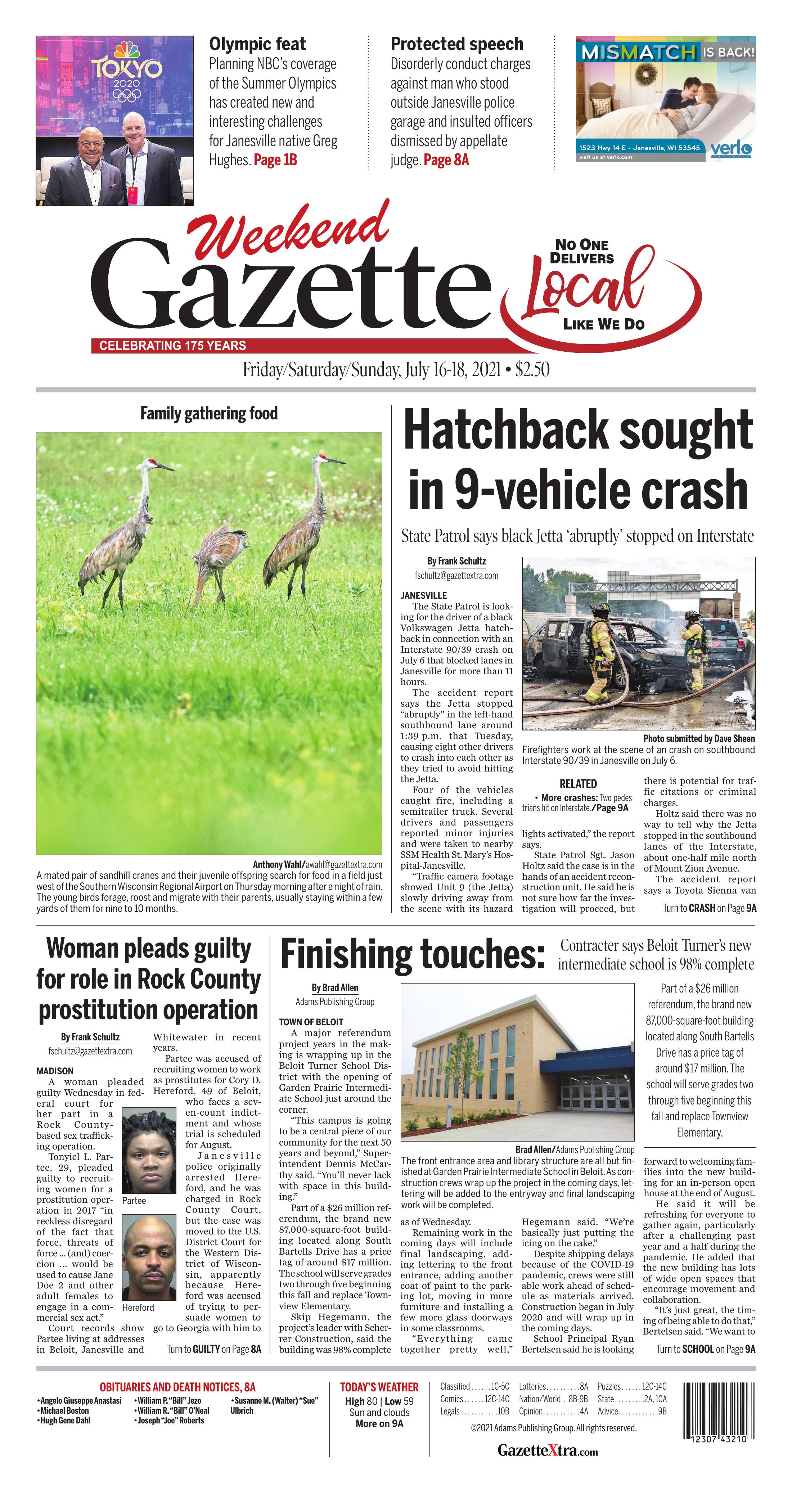 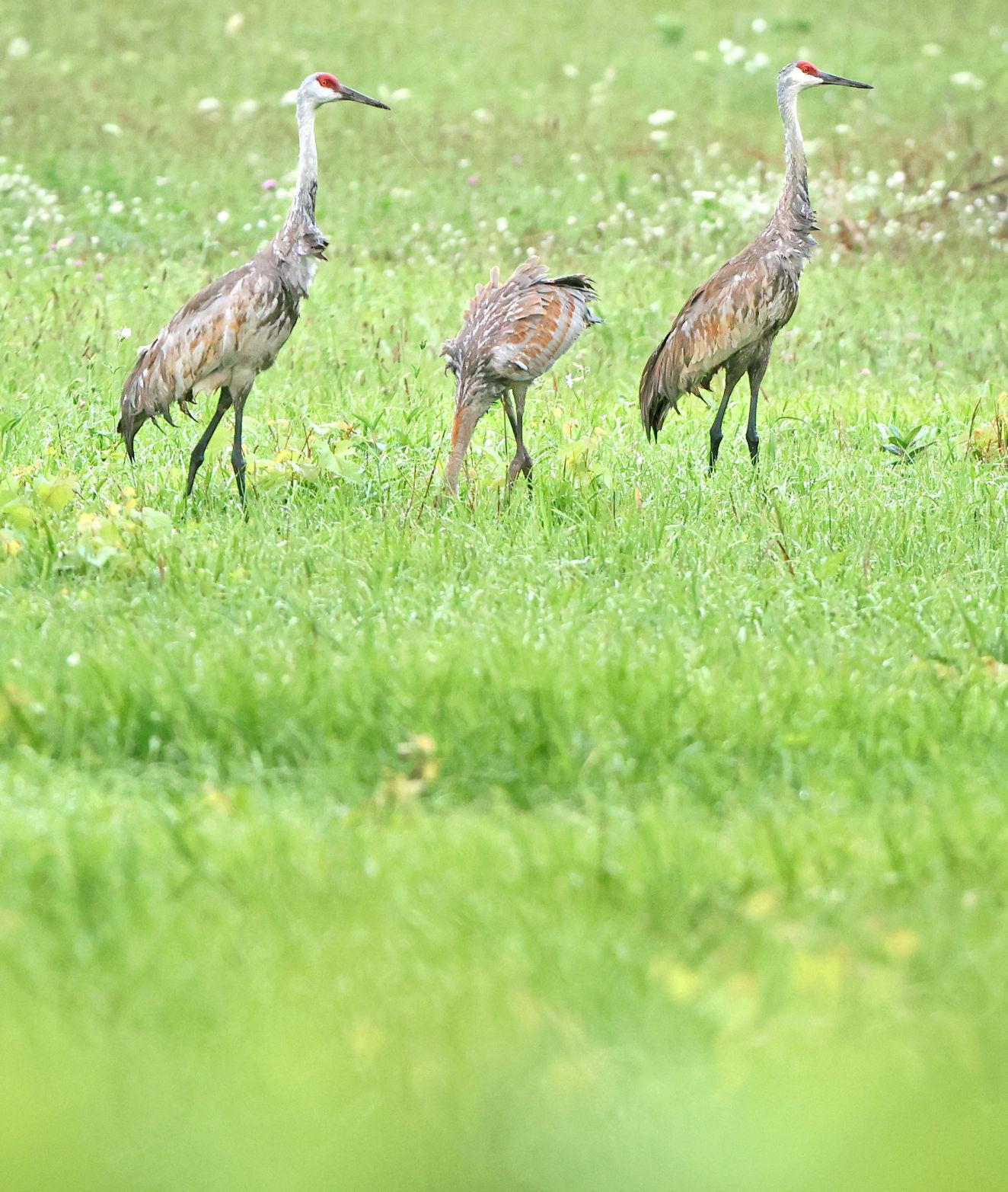 A mated pair of sandhill cranes and their juvenile offspring search for food in a field just west of the Southern Wisconsin Regional Airport on Thursday morning after a night of rain. The young birds forage, roost and migrate with their parents, usually staying within a few yards of them for nine to 10 months.

The front entrance area and library structure are all but finished at Garden Prairie Intermediate School in Beloit. As construction crews wrap up the project in the coming days, lettering will be added to the entryway and final landscaping work will be completed.

The gymnasium is complete at Garden Prairie Intermediate School. The facility will soon be open for use by community organizations and local sports teams.

Garden Prairie Intermediate School Principal Ryan Bertelsen shows off the brand new playground set outside the building on Wednesday. The school grounds will soon become open for public use after all remaining construction wraps up.

Numerous murals decorate the interior of Garden Prairie Intermediate School. Each of the Turner district’s school buildings are now located nearby the central campus.

A major referendum project years in the making is wrapping up in the Beloit Turner School District with the opening of Garden Prairie Intermediate School just around the corner.

“This campus is going to be a central piece of our community for the next 50 years and beyond,” Superintendent Dennis McCarthy said. “You’ll never lack with space in this building.”

Part of a $26 million referendum, the brand new 87,000-square-foot building located along South Bartells Drive has a price tag of around $17 million. The school will serve grades two through five beginning this fall and replace Townview Elementary.

Skip Hegemann, the project’s leader with Scherrer Construction, said the building was 98% complete as of Wednesday.

Remaining work in the coming days will include final landscaping, adding lettering to the front entrance, adding another coat of paint to the parking lot, moving in more furniture and installing a few more glass doorways in some classrooms.

“Everything came together pretty well,” Hegemann said. “We’re basically just putting the icing on the cake.”

Despite shipping delays because of the COVID-19 pandemic, crews were still able work ahead of schedule as materials arrived. Construction began in July 2020 and will wrap up in the coming days.

School Principal Ryan Bertelsen said he is looking forward to welcoming families into the new building for an in-person open house at the end of August.

He said it will be refreshing for everyone to gather again, particularly after a challenging past year and a half during the pandemic. He added that the new building has lots of wide open spaces that encourage movement and collaboration.

“It’s just great, the timing of being able to do that,” Bertelsen said. “We want to let the kids have an opportunity to be in the building before the first day of school.”

The new school also includes several outdoor learning spaces, which classes are likely to use as weather allows. Bertelsen said those areas will help break up students’ days with a change of scenery.

A full playground set is also completely installed behind the building. The playground is wheelchair accessible and has a rubberized surface on the ground instead of wood chips or gravel.

While it is not yet open to the public, McCarthy said he anticipates kids from surrounding neighborhoods will visit the play equipment outside of school hours.

The district is also planning to add baseball diamonds near the new school.

Inside, the front entrance is fully built out with secure doors, alarm systems and other safety measures.

The gymnasium is complete and will likely be used by various community organizations or youth groups after school hours. It is also expected to serve as backup location for high school sporting events.

A special education wing is close to the library in the center of the building.

The library itself has bookshelves set up with automated blinds to help block out sunlight or allow natural light in.

The school is partitioned into four different grade areas, with specific themes for each grade level. Murals and paintings decorate the walls with references to various community landmarks, such as the Beloit College Powerhouse or Big Hill Park. 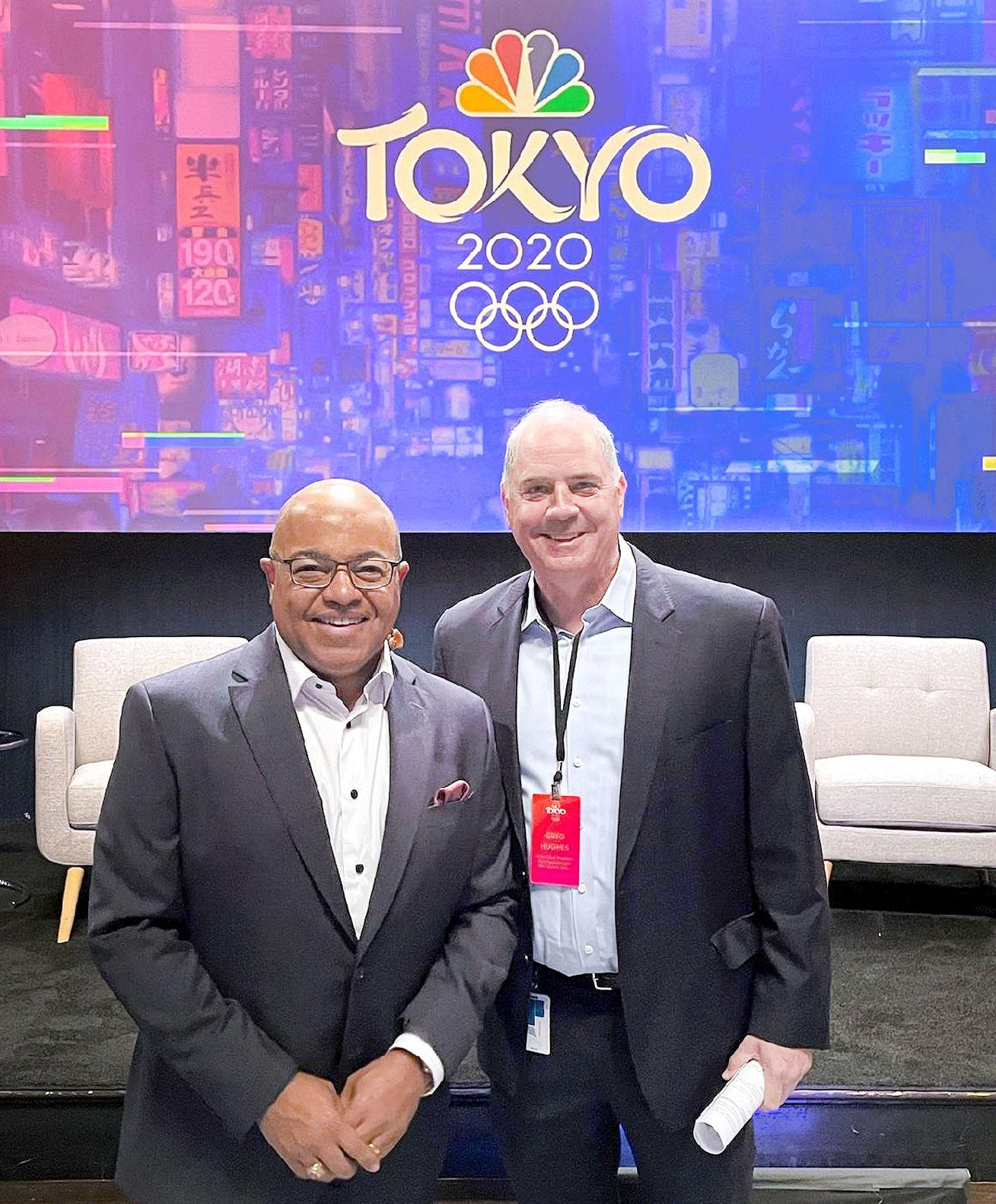 A woman pleaded guilty Wednesday in federal court for her part in a Rock County- based sex trafficking operation.

Tonyiel L. Partee, 29, pleaded guilty to recruiting women for a prostitution operation in 2017 “in reckless disregard of the fact that force, threats of force ... (and) coercion … would be used to cause Jane Doe 2 and other adult females to engage in a commercial sex act.”

Partee was accused of recruiting women to work as prostitutes for Cory D. Hereford, 49 of Beloit, who faces a seven-count indictment and whose trial is scheduled for August.

Janesville police originally arrested Hereford, and he was charged in Rock County Court, but the case was moved to the U.S. District Court for the Western District of Wisconsin, apparently because Hereford was accused of trying to persuade women to go to Georgia with him to engage in sex for money, court documents indicate.

Partee was indicted after the case went federal.

In a brief filed by the U.S. Attorney’s Office in Madison, Partee is described as sending Hereford a Facebook message July 24, 2017, saying she “put on some girls to help with money,” and Aug. 13, 2017, that she “got this mixed one lined up right now.”

Hereford is charged with recruiting and transporting Jane Doe 1, a minor, and Jane Doe 2, an adult, knowing they would be made to engage in sex for money; sexual assault of a child; and maintaining 420 S. Franklin St., Janesville, as a place for distributing and using crack cocaine and heroin, all in 2017.

Partee is not charged in connection with the minor.

In another prosecution document, Partee is accused of working as a prostitute for Hereford and recruiting Jane Doe 2, telling him in a Facebook message, “white girl (identified as Doe 2) tryna (trying to) make money down here. She’s 20 and smokes dope. … She’s ready and beautiful.”

The document also alleges: “Both Jane Does have made statements that they were afraid of Hereford, and Jane Doe 2 stated that she was afraid of Partee.”

The Rock County criminal complaint against Hereford quotes a witness who said he used hotels in Janesville and Beloit for the prostitution and that he used heroin or cocaine to help control the women who worked for him.

As part of a plea agreement, Partee agreed to give a statement about all her criminal activity and that of all others she knows and to testify in court, and if she gives “substantial assistance,” the U.S. attorney will recommend the maximum available sentence reduction for acceptance of responsibility.

Partee’s sentencing is scheduled for Oct. 7.

Firefighters work at the scene of an crash on southbound Interstate 90/39 in Janesville on July 6.

The State Patrol is looking for the driver of a black Volkswagen Jetta hatchback in connection with an Interstate 90/39 crash on July 6 that blocked lanes in Janesville for more than 11 hours.

The accident report says the Jetta stopped “abruptly” in the left-hand southbound lane around 1:39 p.m. that Tuesday, causing eight other drivers to crash into each other as they tried to avoid hitting the Jetta.

Four of the vehicles caught fire, including a semitrailer truck. Several drivers and passengers reported minor injuries and were taken to nearby SSM Health St. Mary’s Hospital-Janesville.

“Traffic camera footage showed Unit 9 (the Jetta) slowly driving away from the scene with its hazard lights activated,” the report says.

State Patrol Sgt. Jason Holtz said the case is in the hands of an accident reconstruction unit. He said he is not sure how far the investigation will proceed, but there is potential for traffic citations or criminal charges.

Holtz said there was no way to tell why the Jetta stopped in the southbound lanes of the Interstate, about one-half mile north of Mount Zion Avenue.

A semitrailer truck driven by Kevin T. Guseck, 36, of Peshtigo, and owned by Double K Express then arrived in the left lane.

Semi fires on I-90 in Janesville cracked the new concrete, delaying reopening

Guseck was unable to stop in time and hit a pickup truck driven by Derek M. Wooderson, 34, of Columbus, Georgia, which had stopped.

Guseck was cited for following too closely.

Wooderson and his four passengers suffered “suspected minor” injuries and were taken to the hospital. The passengers were Stacy A. Wooderson 33; Heath R. Wooderson, 4; Ava J. Wooderson, 9; and Pierce L. Wooderson, 6, all of the same address.

The semi continued into the right lane, catching fire and jackknifing as it hit the Sienna.

Fires then broke out in a Honda van driven by Alaa Mustafa Ali Aquel, 46, of Eagan, Minnesota; Wooderson’s pickup and a Nissan Pathfinder SUV driven by Daniel M. Koch, 58, of Huntley, Illinois, according to the report.

Koch and his three passengers, all of the same address, were taken to the hospital with “suspected minor” injuries. Passengers were Leslie M. Koch, 51; Allison M. Koch, 19; and Emily G. Koch, 16.

The semi’s trailer also hit a Ford Escape SUV driven by Steven R. King of Union City, Tennessee, as the semi came to a stop in the right lane, pushing the Escape along the right-side concrete barrier.

Richard K. Ohlinger, 75, of Rochelle, Illinois, said his Lincoln Nautilus SUV was hit in the rear, causing him to swerve into the semitrailer. The Lincoln then hit the concrete barriers on the left side of the road and rolled onto its roof.

Ohlinger was not cited, but the report said he was following too closely and failed to control the vehicle. He and his passenger, Linda L. Ohlinger, 75, same address, suffered “suspected minor” injuries and were taken to the hospital.

Interstate 90/39 lanes were blocked Tuesday afternoon after a vehicle or vehicles caught fire in the northbound lanes.

Aquel, the driver of the Honda minivan, saw the crash happening ahead of him but couldn’t avoid hitting Wooderson’s pickup. The Honda then caught fire.

Aquel suffered a “suspected minor injury” and was taken to the hospital. The report said Aquel was following too closely and lost control but he was not cited.

The crash sent traffic onto Janesville-area streets and highways until early the following morning.

The incident was the second multivehicle crash on the Interstate in Janesville in two days.