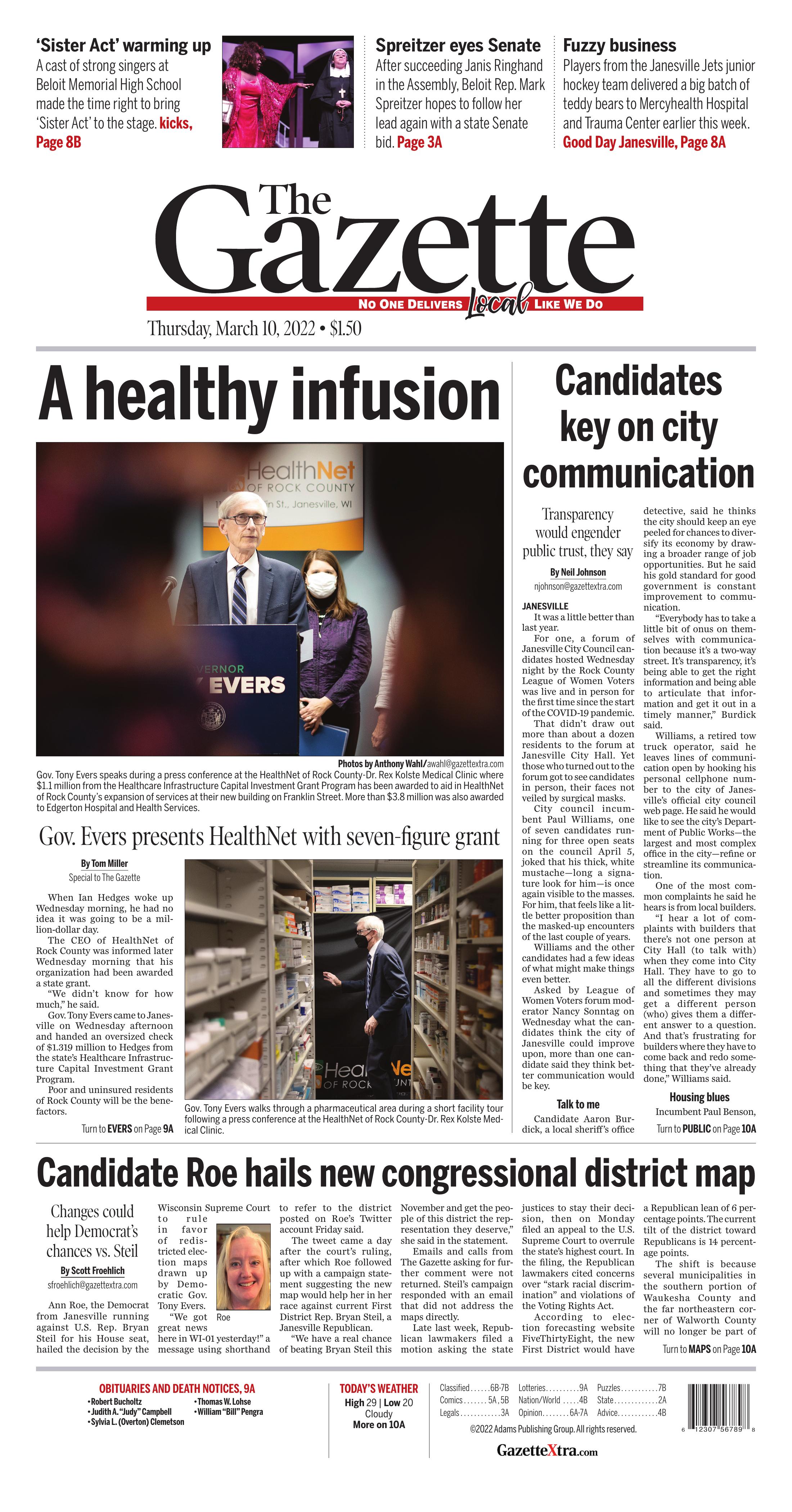 When Ian Hedges woke up Wednesday morning, he had no idea it was going to be a million-dollar day.

The CEO of HealthNet of Rock County was informed later Wednesday morning that his organization had been awarded a state grant.

Poor and uninsured residents of Rock County will be the benefactors.

The funds will go toward HealthNet of Rock County’s new facility on Franklin Street, which will allow an expansion of services for more patients. 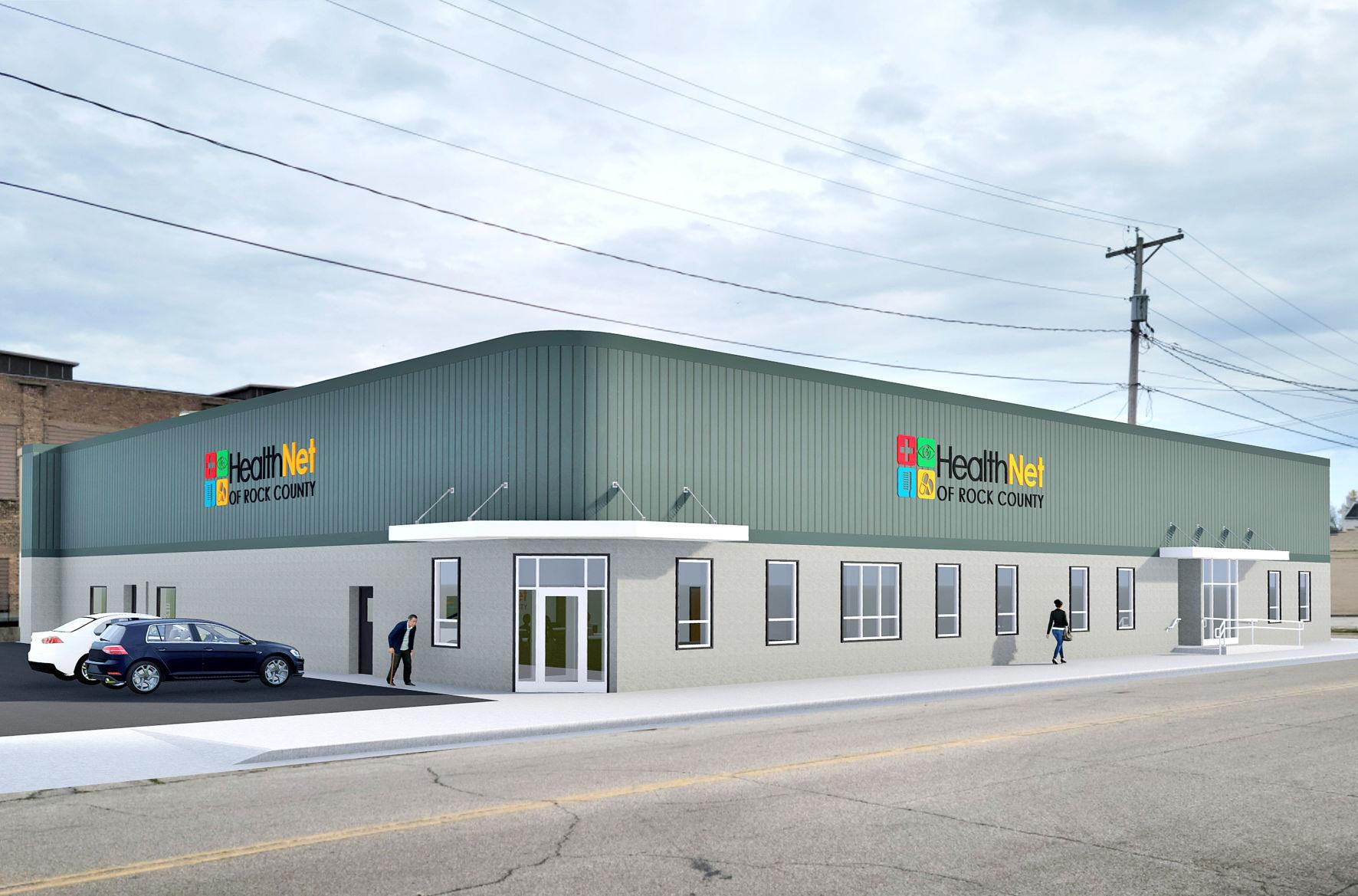 “Three years ago, we began planning the building of this new facility,” Hedges said. “We had a huge need for it. Then COVID happened.”

That made treating and protecting patients the priority. Now completing the refurbishing and moving all the company’s services into the new building gets back on track.

Evers said the HealthNet grant application was one of 70 requests received.

“If we want to see Wisconsin families and communities succeed in years to come, then we need to make investments today in order to build long-term sustainable well-being for tomorrow,” Evers said.

“I’m proud to say today’s investment will lay the foundation for a healthier tomorrow for families here in southern Wisconsin.”

Hedges said the grant money was the result of both political parties in Wisconsin working together.

“This is the culmination of what bipartisan problem-solving looks like,” he said.

After demolition work is complete, construction of the new facility is set to begin in three weeks. Hedges plans to open the building in August.

Ann Roe, the Democrat from Janesville running against U.S. Rep. Bryan Steil for his House seat, hailed the decision by the Wisconsin Supreme Court to rule in favor of redistricted election maps drawn up by Democratic Gov. Tony Evers.

“We got great news here in WI-01 yesterday!” a message using shorthand to refer to the district posted on Roe’s Twitter account Friday said.

The tweet came a day after the court’s ruling, after which Roe followed up with a campaign statement suggesting the new map would help her in her race against current First District Rep. Bryan Steil, a Janesville Republican.

“We have a real chance of beating Bryan Steil this November and get the people of this district the representation they deserve,” she said in the statement.

Emails and calls from The Gazette asking for further comment were not returned. Steil’s campaign responded with an email that did not address the maps directly.

Late last week, Republican lawmakers filed a motion asking the state justices to stay their decision, then on Monday filed an appeal to the U.S. Supreme Court to overrule the state’s highest court. In the filing, the Republican lawmakers cited concerns over “stark racial discrimination” and violations of the Voting Rights Act.

The shift is because several municipalities in the southern portion of Waukesha County and the far northeastern corner of Walworth County will no longer be part of Steil’s district. The area is a Republican stronghold where Steil beat his 2020 Democratic challenger by a combined total of 47,047-17,873.

The most populous municipalities making up for those losses will be the cities of Beloit and Whitewater, the town of Whitewater in Walworth County, and three southeastern Milwaukee County suburbs, St. Francis, Cudahy and South Milwaukee. All those cities, which generally boast more minority voters and more college-aged voters than the territory being drawn out of the district, favored the Democrats in their 2020 House races by a combined total of 6,104 votes.

Paired with Steil’s advantage in the areas being drawn out of the district, that accounts for a 35,278-vote swing toward Democrats.

Still, Roe and her party will have their work cut out for them in the new First District should it survive an appeal to the U.S. Supreme Court. Steil won his 2020 reelection campaign by 75,101 votes with strong showings in Walworth, Racine and Kenosha counties.

It was a little better than last year.

For one, a forum of Janesville City Council candidates hosted Wednesday night by the Rock County League of Women Voters was live and in person for the first time since the start of the COVID-19 pandemic.

That didn’t draw out more than about a dozen residents to the forum at Janesville City Hall. Yet those who turned out to the forum got to see candidates in person, their faces not veiled by surgical masks.

City council incumbent Paul Williams, one of seven candidates running for three open seats on the council April 5, joked that his thick, white mustache—long a signature look for him—is once again visible to the masses. For him, that feels like a little better proposition than the masked-up encounters of the last couple of years.

Williams and the other candidates had a few ideas of what might make things even better.

Asked by League of Women Voters forum moderator Nancy Sonntag on Wednesday what the candidates think the city of Janesville could improve upon, more than one candidate said they think better communication would be key.

Candidate Aaron Burdick, a local sheriff’s office detective, said he thinks the city should keep an eye peeled for chances to diversify its economy by drawing a broader range of job opportunities. But he said his gold standard for good government is constant improvement to communication.

Williams, a retired tow truck operator, said he leaves lines of communication open by hooking his personal cellphone number to the city of Janesville’s official city council web page. He said he would like to see the city’s Department of Public Works—the largest and most complex office in the city—refine or streamline its communication.

One of the most common complaints he said he hears is from local builders.

“I hear a lot of complaints with builders that there’s not one person at City Hall (to talk with) when they come into City Hall. They have to go to all the different divisions and sometimes they may get a different person (who) gives them a different answer to a question. And that’s frustrating for builders where they have to come back and redo something that they’ve already done,” Williams said.

Incumbent Paul Benson, a local attorney, echoed the sentiment but drilled down on one of the effects of communication gone awry: a potential image problem for the city. He said it could be hampering housing starts at a time they’re needed most.

“This goes to housing. We need to change our reputation among developers and contractors that we are a hard city to do business with. I’d like to think we’re improving, but that reputation is still out there. And that’s hurting us on the housing side,” Benson said.

Candidate Brian Bridges sounded off on housing, too, saying the city has to find more ways to spur growth—particularly in affordable housing and upscale housing. He pointed out there is a shortage on both ends of the cost spectrum.

Bridges said he has heard estimates from a friend on the Rock County Board that the county has an average of 260 families a night staying in local hotel rooms. He said that is glaring, but so are possible opportunity costs.

One local chamber of commerce study showed about 7,200 new families could seek rental housing in Janesville between now and 2025.

Candidate Richard Neeno, a downtown restaurateur, said the city needs to “toot its own horn” more in its successes, but it also could more effectively dish the details of its decisions on taxing and the city budget.

“Why was the road tax increased? Why were the sewer (and curb and gutter) improvements pushed to the water bills? I know that there was a great deal of conversation. And there were newspaper articles and the like,” Neeno said. “But somehow I don’t get the impression that the message has been fully conveyed and that people understand that there was debt service savings for the future as a result of things like that. It’s something the city needs to improve.”

Candidate Steph Meiklejohn, a local auto dealer, said he hears grumbling from residents that it seems like the city might not know about “the things that matter the most to them.”

“Sometimes I feel like those things aren’t making their way efficiently to the council so the council can make the appropriate decisions,” Meiklejohn said. “The best way to do that is to be transparent and to be able to listen to people, and have ways to open the communication between the people that live here and the people that make the decisions.”

Thomas Lepinski, a retired business accountant who calls himself and “independent” voice, said the city should look inward and take seriously the results of resident satisfaction surveys it conducts. He said results of the latest survey show that voters want to be “listened to.”

“A lot of my friends are trying to survive and balance their budget on minimum wage or $20,000 a year. And I think by increasing the water bill $40 a year … as well as the $20 (increase) on the wheel tax, it’s really creating a hardship for a lot of people on the lower end of the economic spectrum.” 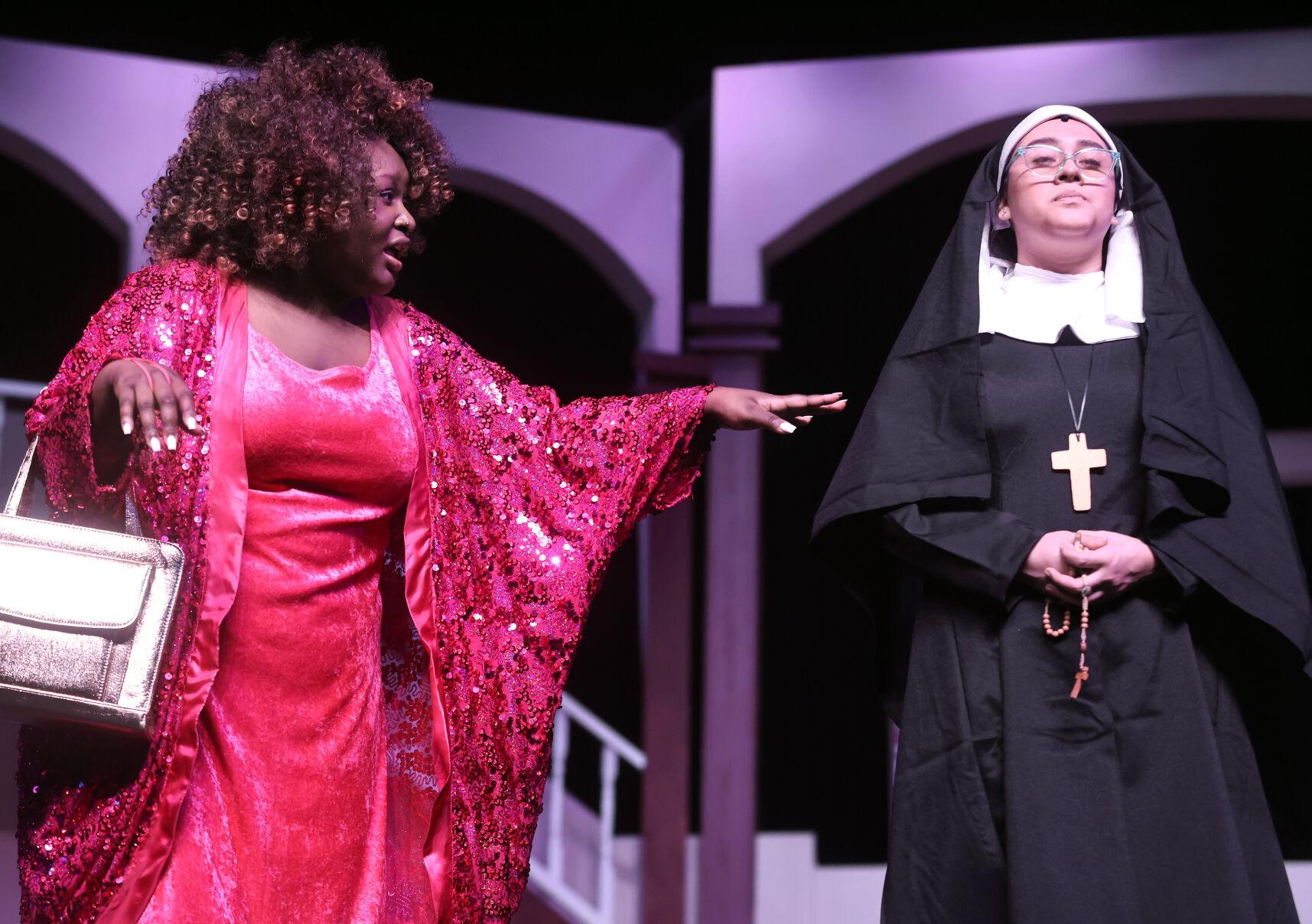 Zantranique Jennings, left, performing as Deloris, and Sofia Romero as Mother Superior, during a dress rehearsal of Beloit Memorial High School’s upcoming production of 'Sister Act.' The musical will be Fridays and Saturdays, March 11-12, and 18-19, at 7:30 p.m. and Sunday, March 20, at 2 p.m. Tickets are $7 for students and seniors and $10 adults.