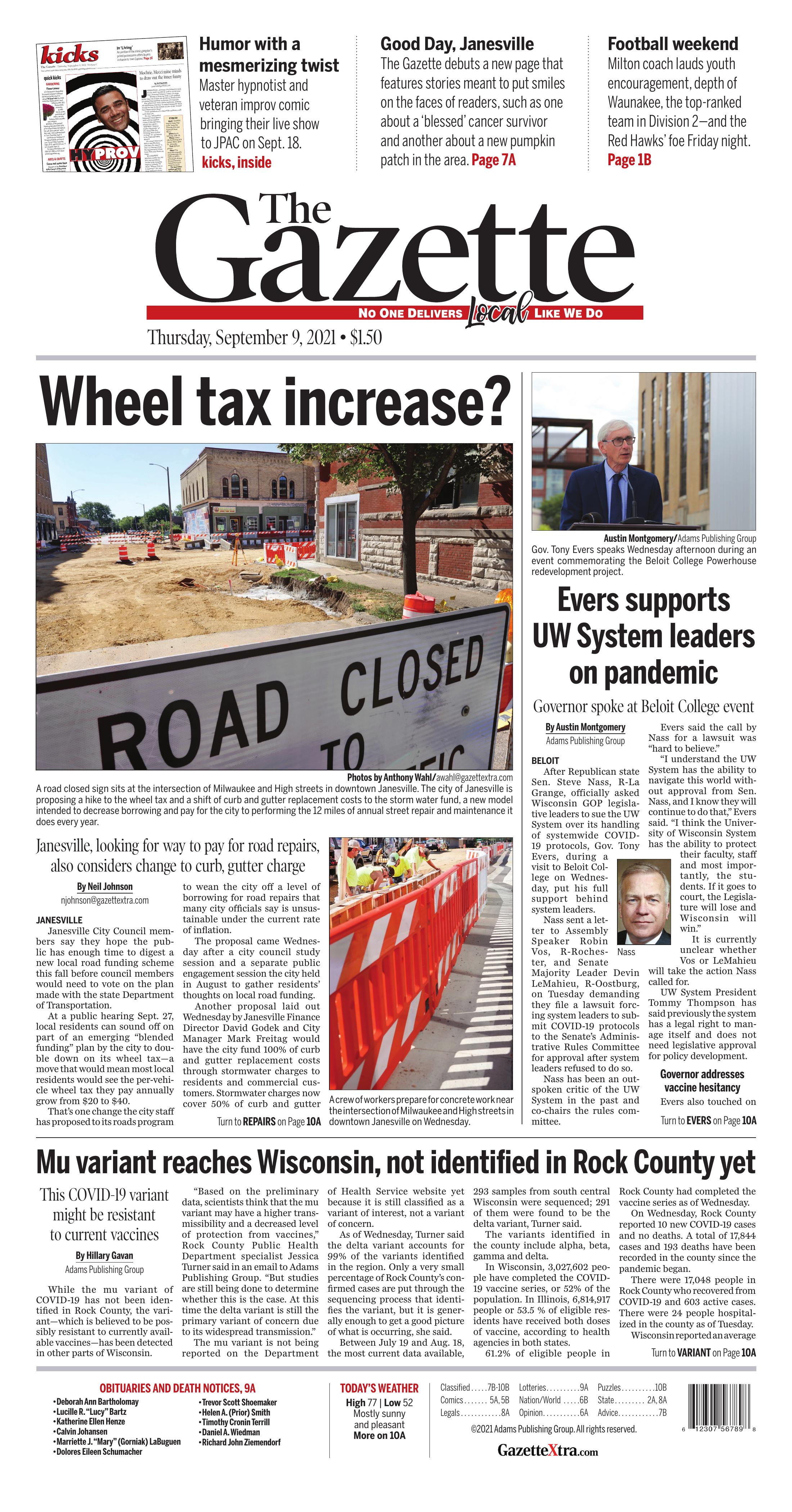 While the mu variant of COVID-19 has not been identified in Rock County, the variant—which is believed to be possibly resistant to currently available vaccines—has been detected in other parts of Wisconsin.

“Based on the preliminary data, scientists think that the mu variant may have a higher transmissibility and a decreased level of protection from vaccines,” Rock County Public Health Department specialist Jessica Turner said in an email to Adams Publishing Group. “But studies are still being done to determine whether this is the case. At this time the delta variant is still the primary variant of concern due to its widespread transmission.”

The mu variant is not being reported on the Department of Health Service website yet because it is still classified as a variant of interest, not a variant of concern.

As of Wednesday, Turner said the delta variant accounts for 99% of the variants identified in the region. Only a very small percentage of Rock County’s confirmed cases are put through the sequencing process that identifies the variant, but it is generally enough to get a good picture of what is occurring, she said.

Between July 19 and Aug. 18, the most current data available, 293 samples from south central Wisconsin were sequenced; 291 of them were found to be the delta variant, Turner said.

The variants identified in the county include alpha, beta, gamma and delta.

In Wisconsin, 3,027,602 people have completed the COVID-19 vaccine series, or 52% of the population. In Illinois, 6,814,917 people or 53.5 % of eligible residents have received both doses of vaccine, according to health agencies in both states.

61.2% of eligible people in Rock County had completed the vaccine series as of Wednesday.

On Wednesday, Rock County reported 10 new COVID-19 cases and no deaths. A total of 17,844 cases and 193 deaths have been recorded in the county since the pandemic began.

There were 17,048 people in Rock County who recovered from COVID-19 and 603 active cases. There were 24 people hospitalized in the county as of Tuesday.

Wisconsin reported an average of 1,590 new cases a day on Wednesday, and an average of eight new deaths per day. The state positivity rate was 8.4%, which has been increasing since mid-August. On Tuesday, the seven-day moving average of people in the hospital with COVID-19 in the state was 987 people. Of those 11.1% were on ventilators.

On Wednesday the Winnebago County Health Department reported 150.8 new cases per 100,000 people, which represented a decrease. The positivity rate was 6.1%, which is also a reduction. 44.4% of that county’s eligible residents are fully vaccinated.

On Sept. 3, the Illinois Department of Public Health reported 30,319 new confirmed and probable cases of coronavirus disease in Illinois, including 178 additional deaths since Aug. 27. As of Sept. 12, 2,286 individuals in Illinois were reported hospitalized with COVID-19. Of those, 551 patients were in ICUs and 302 patients with COVID-19 were on ventilators. The preliminary seven-day statewide test positivity from Aug. 27 through Sept. 2 was 5.4%.

A road closed sign sits at the intersection of Milwaukee Street and High Street in downtown Janesville. The city of Janesville is proposing a hike to the wheel tax and a shift of curb and gutter replacement costs to the storm water fund, a new model intended to decrease borrowing and pay for the city to hold the line on the 12 miles of annual street repair and maintenance the city tackles every year.

A crew of workers prepare for concrete work near the intersection of Milwaukee Street and High Street in downtown Janesville on Wednesday. The city of Janesville is proposing a hike to the wheel tax and a shift of curb and gutter replacement costs to the storm water fund, a new model intended to decrease borrowing and pay for the city to hold the line on the 12 miles of annual street repair and maintenance the city tackles every year.

Janesville City Council members say they hope the public has enough time to digest a new local road funding scheme this fall before council members would need to vote on the plan made with the state Department of Transportation.

At a public hearing Sept. 27, local residents can sound off on part of an emerging “blended funding” plan by the city to double down on its wheel tax—a move that would mean most local residents would see the per-vehicle wheel tax they pay annually grow from $20 to $40.

That’s one change the city staff has proposed to its roads program to wean the city off a level of borrowing for road repairs that many city officials say is unsustainable under the current rate of inflation.

The proposal came Wednesday after a city council study session and a separate public engagement session the city held in August to gather residents’ thoughts on local road funding.

Over the next 5 years, the city faces about $16 million in needed curb and gutter projects as part of its streets program—with about $2.7 million scheduled in curb and gutter work to be done in 2022.

City officials said the proposed funding shift for curb and gutter work along with an increase in the wheel tax would save the city from borrowing $2.5 million over the next year. Moreover, they said it would save about $13 million in borrowing for road projects over the next five years, based on the city’s current, 12-miles-per-year street repair schedule.

The plan also would cut down on about $1.75 million in interest payments the city would pay out under its current roads program, Godek and Freitag said.

On Wednesday, council members acknowledged the city has been in a two-year-long hunt for ways to more sustainably fund its road repair schedule without increasingly piling on debt through borrowing.

Earlier this year, the council shelved talks on creating a transportation utility after the concept drew backlash from the local business community over its potential costs to businesses and commercial property owners.

Freitag on Wednesday called the new proposals a “reasonable, interim step,” not an “end-all, be-all” approach to road funding.

Freitag said he favors a transportation utility, although he and Godek pointed out that when Janesville proposed a utility earlier this year, it was the first municipality in the state to do so.

The new model proposed Wednesday does not include a transportation utility. Instead, Freitag said it would allow the city to take a “tactical pause” in pursuing a utility while state and local officials learn more about whether such utilities are legal and could withstand legal opposition some partisan politicians and business groups say could arise.

By comparison, the cities of Milwaukee and Milton charge a $30 wheel tax, and Madison charges $40, according to a city analysis of other municipal roads programs.

Wisconsin’s annual vehicle registration fee is lower than that in most other peer states, Godek said.

Over the long haul, Godek and Freitag said the storm sewer and wheel tax increases would draw down the amount people would be asked to pay through taxes.

During discussions last month, Freitag and Godek said both pieces of the new proposal garnered more positive responses from the public than did a set of alternate proposals to form a transportation utility or a transportation special assessment.

If the council greenlights the new roads program, an increase to the wheel tax would go in effect in January, and the city next year would begin charging curb and gutter replacement to the city’s storm sewer budget.

On a 6-0 vote, the city council approved holding a public hearing for the wheel tax increase Sept. 27. The whole proposal still faces a full council vote plus registration of the wheel tax changes with the DOT.

The council could shift curb and gutter projects to the storm water fund through the adoption of a new city budget later this fall.

City Council President Douglas Marklein asked Freitag if the council might delay a public hearing and votes on the proposal until later in the fall to give residents more time to learn the nuts and bolts of the proposals.

Marklein and Council Vice President Paul Benson both pointed out that while the city has tried to alert residents of a new roads funding proposal, a public engagement forum the city held in August to garner comments and ideas from residents on the roads program was “poorly attended.”

Freitag said the city must give the DOT at least 90 days advance notice on a wheel tax change in order for the change to go in effect on Jan. 1, when some residents could begin renewing their vehicle registrations.

Helen A. (Prior) Smith

Nass has been an outspoken critic of the UW System in the past and co-chairs the rules committee.

Evers said the call by Nass for a lawsuit was “hard to believe.”

UW System President Tommy Thompson has said previously the system has a legal right to manage itself and does not need legislative approval for policy development.

The Beloit College Powerhouse redevelopment project was recognized with a statewide energy efficiency award during a special event and tour of the facility that included Wisconsin Gov. Tony Evers and other state leaders.

Evers also touched on Beloit’s low vaccination rate during his visit to the city.

He said he “understands” the hesitancy surrounding the COVID-19 vaccine but called on all people who have not been vaccinated to get the shot. Beloit’s vaccination rate is much lower than the state average and that of surrounding communities.

Beloit currently has a vaccination completion rate of 38.6% of the city’s population, according to the Wisconsin Department of Health Services.

That figure is dramatically lower than other communities in Rock County, including Janesville (53.9%) and the town of Beloit (59.6%), and the statewide vaccine completion rate of 52% as of Wednesday.

“I understand the hesitancy, I understand the political issues that surround vaccines and we will continue to do our good work to get shots in arms,” Evers said. “It is really, really important to make that happen. Everyone in the Beloit community has something to gain in getting the pandemic taken care of.”

Evers touted a $100 blanket incentive program for all unvaccinated people in Wisconsin to get the shot. The program, which started Aug. 20, was extended until Sept. 19. Between Aug. 20 and Sept. 1, more than 65,000 people received their first dose.

To receive the incentive, Wisconsin residents must visit 100.wisconsin.gov or call 844-684-1064 to register. Information will be used to verify residents had first doses submitted to the Wisconsin Immunization Registry between Aug. 20 and Sept. 19. All $100 rewards will be mailed to residents’ addresses and could take six to eight weeks to be issued.

“We have one way of getting by this pandemic, and a lot of the students out there understand this well,” Evers said. “You have to get a shot. That is how we are going to get through this, and low rates of participation aren’t very helpful, and that’s why we went down the road of investing $100 per shot.”