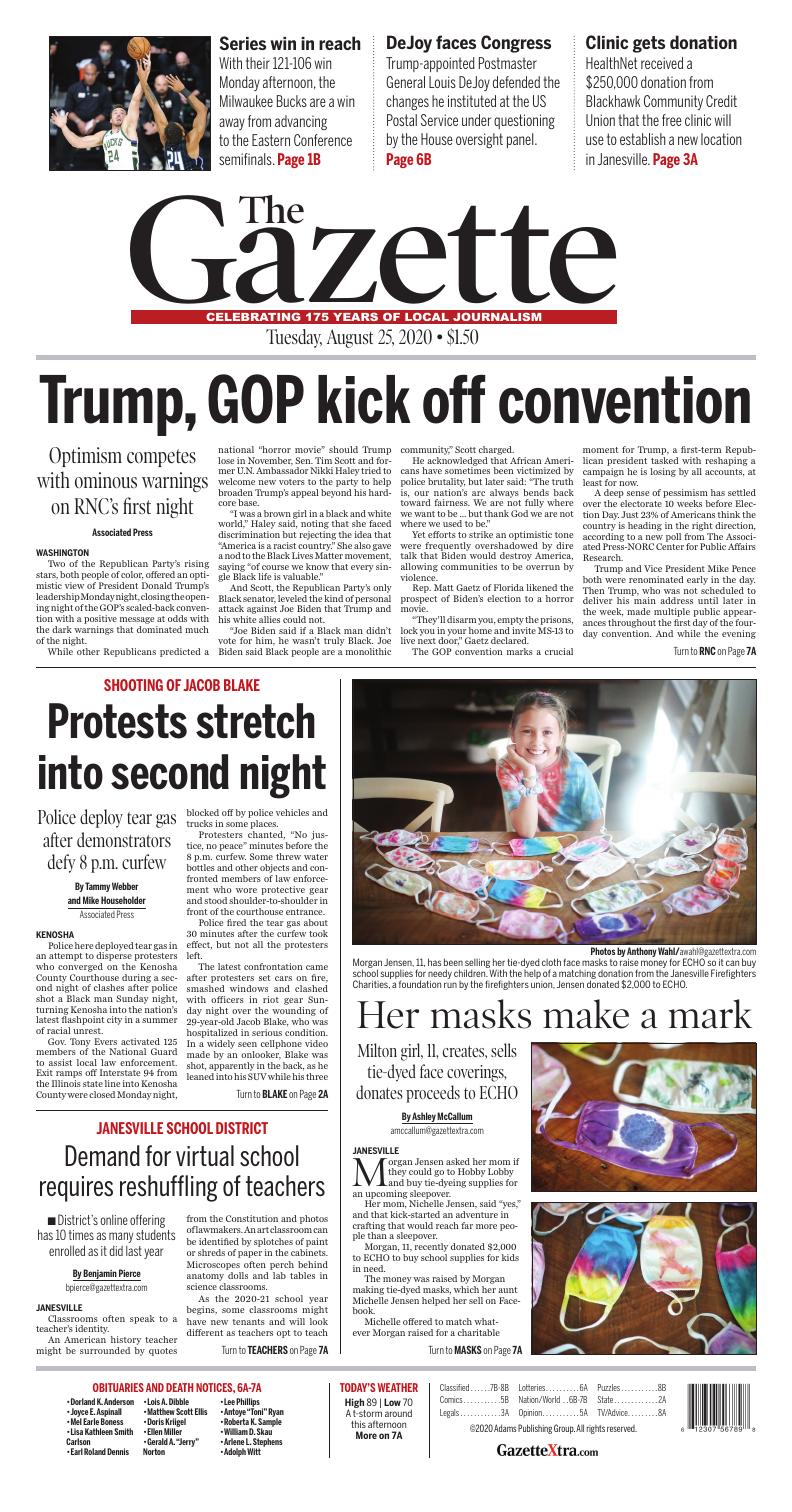 Morgan Jensen, 11, has been selling her tie-dyed cloth face masks to raise money for ECHO so it can buy school supplies for needy children. With the help of a matching donation from the Janesville Firefighters Charities, a foundation run by the firefighters union, Jensen donated $2,000 to ECHO.

Morgan Jensen asked her mom if they could go to Hobby Lobby and buy tie-dyeing supplies for an upcoming sleepover.

Her mom, Nichelle Jensen, said “yes,” and that kick-started an adventure in crafting that would reach far more people than a sleepover.

Morgan, 11, recently donated $2,000 to ECHO to buy school supplies for kids in need.

The money was raised by Morgan making tie-dyed masks, which her aunt Michelle Jensen helped her sell on Facebook.

Michelle offered to match whatever Morgan raised for a charitable donation, Morgan said.

“I loved seeing someone her age making a difference in our community during the pandemic,” said Jessica Locher, associate director of ECHO. “She helped keep people healthy by creating the masks and raising money for direct services such as school supplies for children in our community who are low-income and/or homeless.” 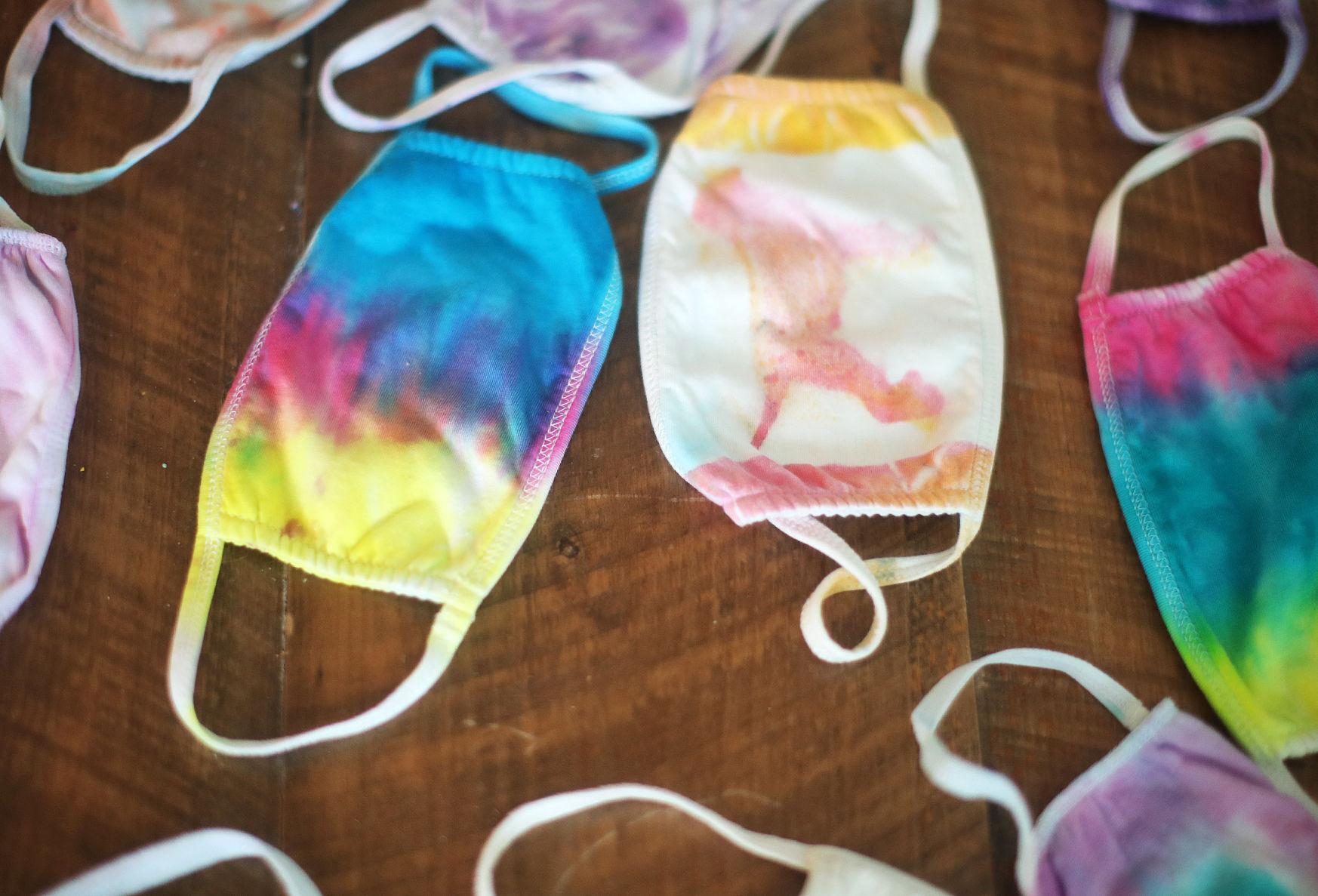 An example of the tie-dyed cloth face masks sold by Morgan Jensen. Jensen estimates she has dyed 350 to 400 masks.

Morgan’s uncle, Janesville fire Lt. Justin Wiskie, learned of the project and offered to match the total amount from Morgan and Michelle with a donation from the Janesville Firefighters Charities, a foundation run by the firefighters union.

“When I heard about the donation to charity, I wanted to make it a bigger and better experience,” Wiskie said. “Our charitable foundation is always looking to donate.”

Morgan loves crafting. She makes bracelets for family members and recently made her own “Clue” game board, she said.

Nobody expected the mask project would get so big, Nichelle said.

Morgan estimates she has dyed somewhere between 350 and 400 masks.

Since the pandemic started, Morgan’s family has spent a lot more time at home, which led to a lot more craft time. 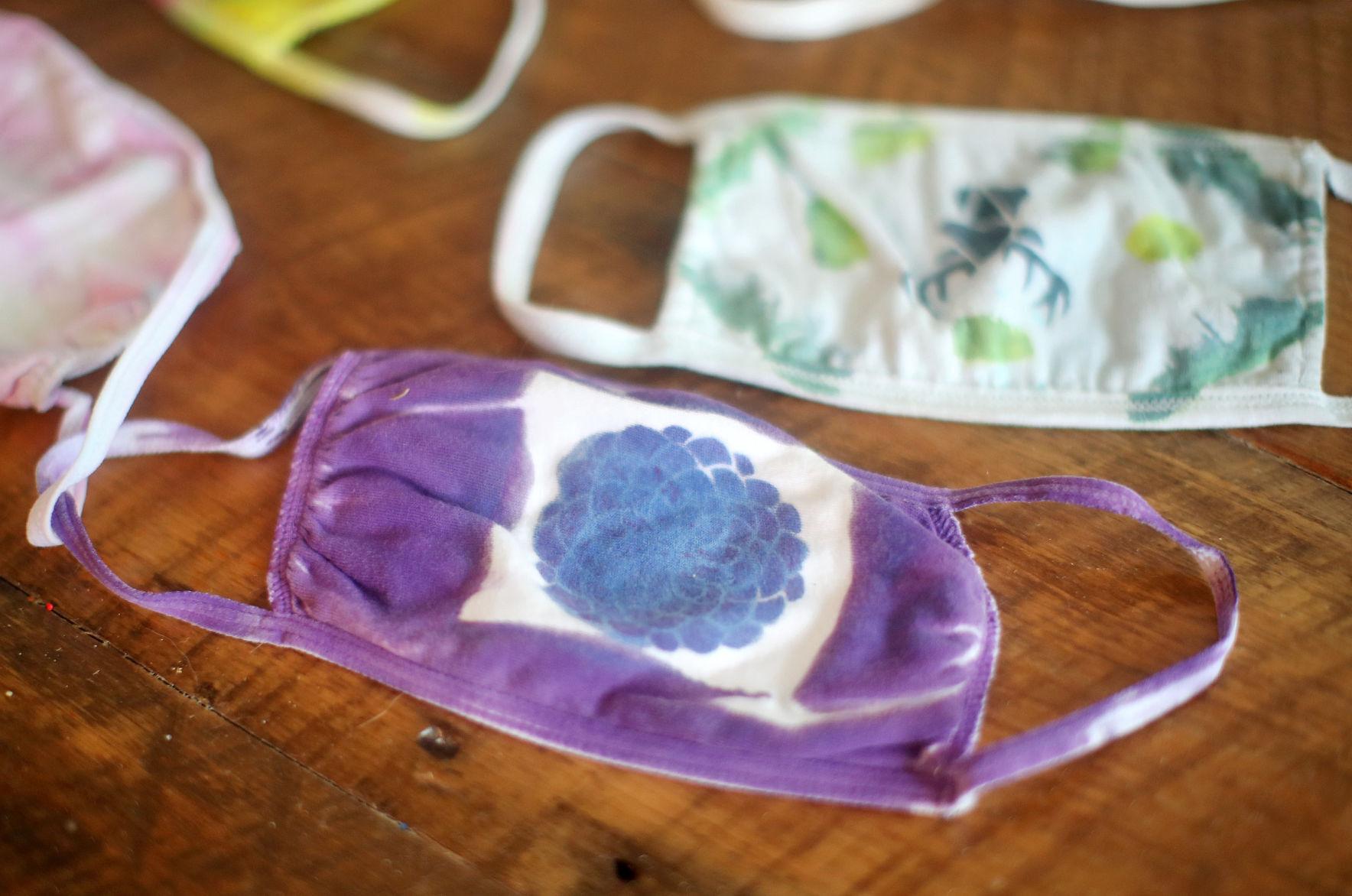 She has missed being able to see friends and go to school, she said, adding that online learning in the spring had its ups and downs.

Nichelle, a nurse practitioner, said she has tried to be honest with her kids about the pandemic and has stressed the importance of wearing masks, social distancing and hand-washing.

“The kids have been pretty resilient,” Nichelle said.

Morgan is excited about starting sixth grade this year at Northside Intermediate School in Milton. She just joined the school band and is learning to play the trumpet, she said.

She will continue tie dyeing with her aunt and grandma and making masks as people ask for them, she said.

“I am really proud of her,” Nichelle said. “She always talks about wanting to give back to people and animals.” 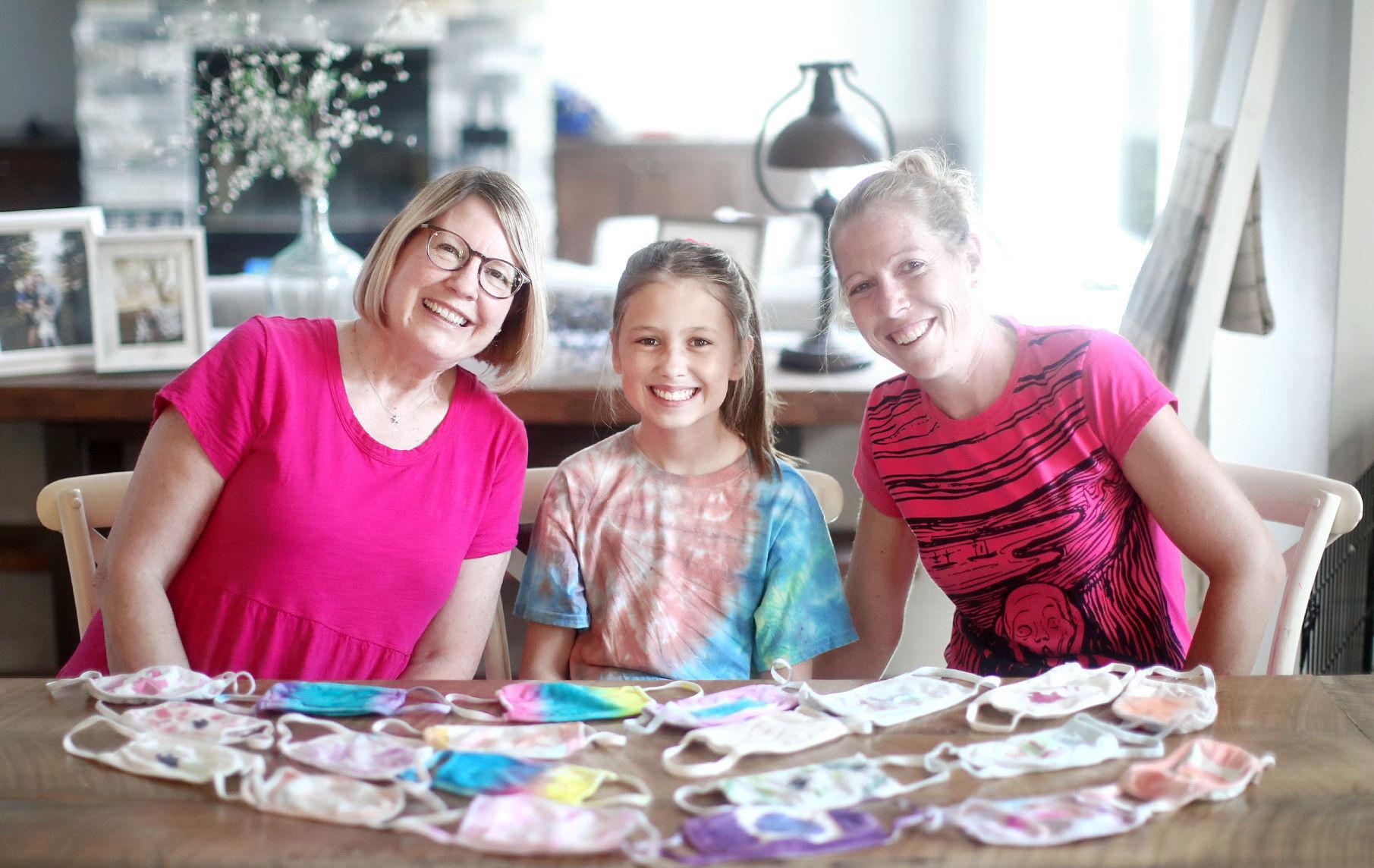 Morgan Jensen (center) with her grandmother Cindy Jensen (left) and aunt Michelle Jensen. Both played important roles in helping Morgan with her donation to ECHO.

To buy a mask

Those looking to buy a tie-dyed mask can reach out to Michelle Jensen on Facebook.

An American history teacher might be surrounded by quotes from the Constitution and photos of lawmakers. An art classroom can be identified by splotches of paint or shreds of paper in the cabinets. Microscopes often perch behind anatomy dolls and lab tables in science classrooms.

As the 2020-21 school year begins, some classrooms might have new tenants and will look different as teachers opt to teach virtually and schools use every inch of their buildings to ensure safe practices during a pandemic.

The Janesville School District continues to shuffle staff before the first full day of learning Sept. 2. Students who chose in-person learning will report for part of the day Sept. 1, but no instruction will be offered.

ARISE, the district’s virtual school, had an enrollment of 2,516 full-time students and 738 part-time students as of Monday morning. About 243 students attended the school last year.

The district is preparing for about 6,700 students to learn fully in person. About 734 students chose a mix of in-person and virtual learning, but almost all of them will take only one class, such as band or welding, in person.

As of Monday morning, about 900 students had not enrolled in any option, according to an email from district spokesman Patrick Gasper.

Gasper said the fact that ARISE opened years before the pandemic has eased the transition and made a larger student body more manageable.

“Having one of the best graduation rates for virtual schools in the nation, we’re not starting from day one,” he said. “This is an established school that has a very interesting system, a successful program. We’re not driving a new car right now. We’re putting people into something that has been working well.”

Assistant Superintendent Scott Garner said district officials met with each principal to plan for the number of students who would learn in person. The district wanted to keep the teacher-pupil ratio lower to reduce health risks.

“By moving so many kids out of the buildings, that creates so much more space for in-person learning and allows us to—to the best of our ability—social distance, provide safety protocols and safety measures, and still get that learning done.”

They moved other staff within buildings to fill the open spots. Since then, the district has worked to fill additional teaching positions at ARISE through what Garner dubbed a “hiring blitz.”

In a July interview, ARISE Principal David Parr told The Gazette that the 12 teachers at the school this spring equated to about seven full-time teaching positions.

The district estimates it will need about 70 full- or part-time teachers to accommodate ARISE’s larger enrollment.

The full-time equivalency of new teachers at ARISE has not been finalized, Garner said Friday. Most of those positions were part time in the past, but this year most of the secondary education teaching jobs at ARISE will be full time, he said.

Many of the new staffers are retirees, and others are former district staffers who moved out of the area but can now teach virtually.

“They know Janesville, and they want to help. They can do that virtually, and so it makes it a lot easier for them to do that,” he said.

The cost of the additional staff and accommodations has not been determined, Garner said. New teachers at ARISE receive training from Parr and are given the technology necessary for teaching.

Teachers will be “co-supervised,” Garner said. For example, if a teacher was assigned to teach at Van Buren Elementary this year but will instead teach at ARISE, the Van Buren principal would co-supervise the teacher along with Parr.

Money to pay for the additional staff could come from the Coronavirus Aid, Relief and Economic Security (CARES) Act, unfilled positions in the district and money saved from lower transportation costs and no sports last spring, Garner said.

The district also has about $225,000 in contingency funds, which are typically spent on emergency situations such as COVID-19, he said. 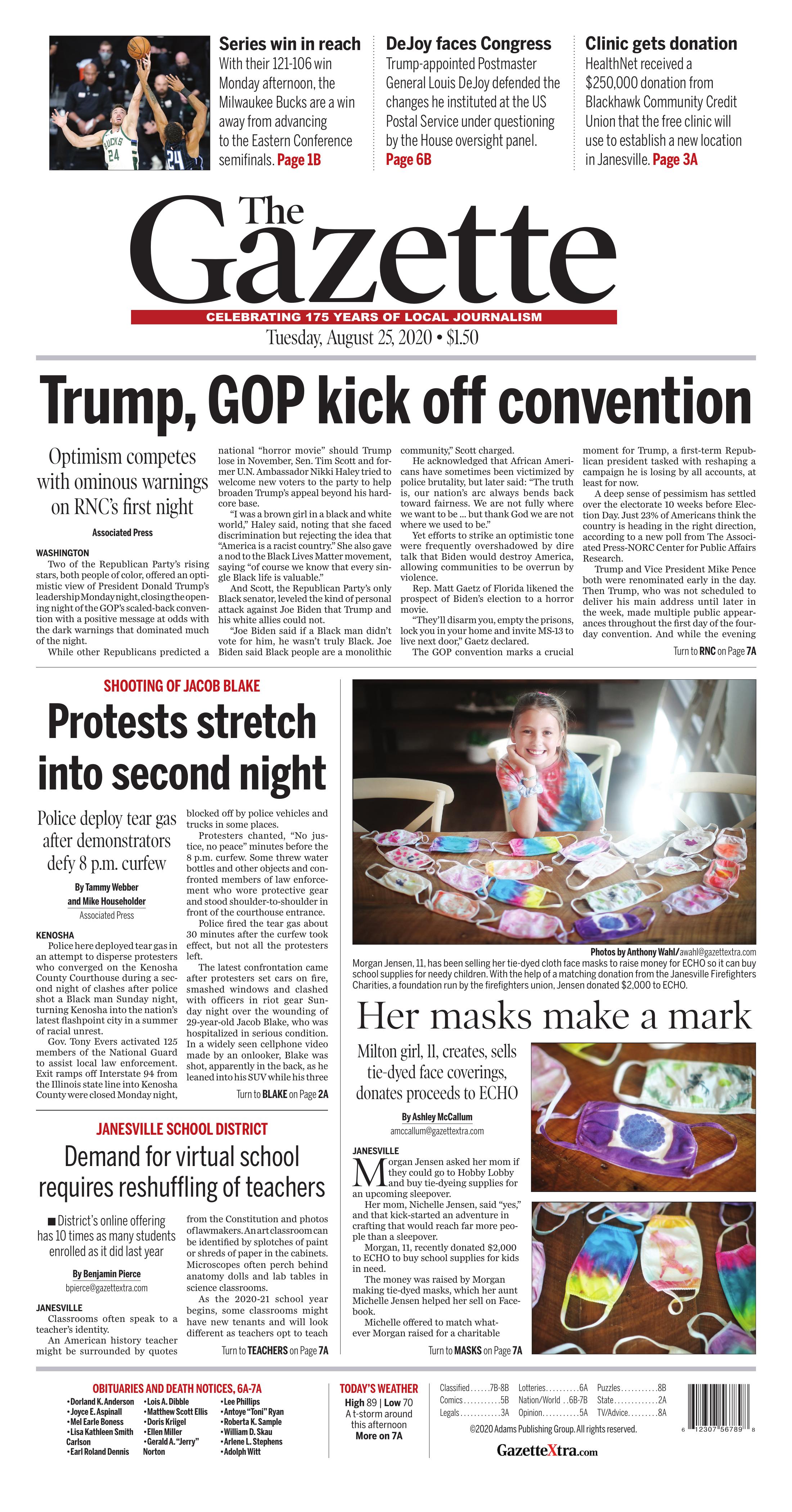