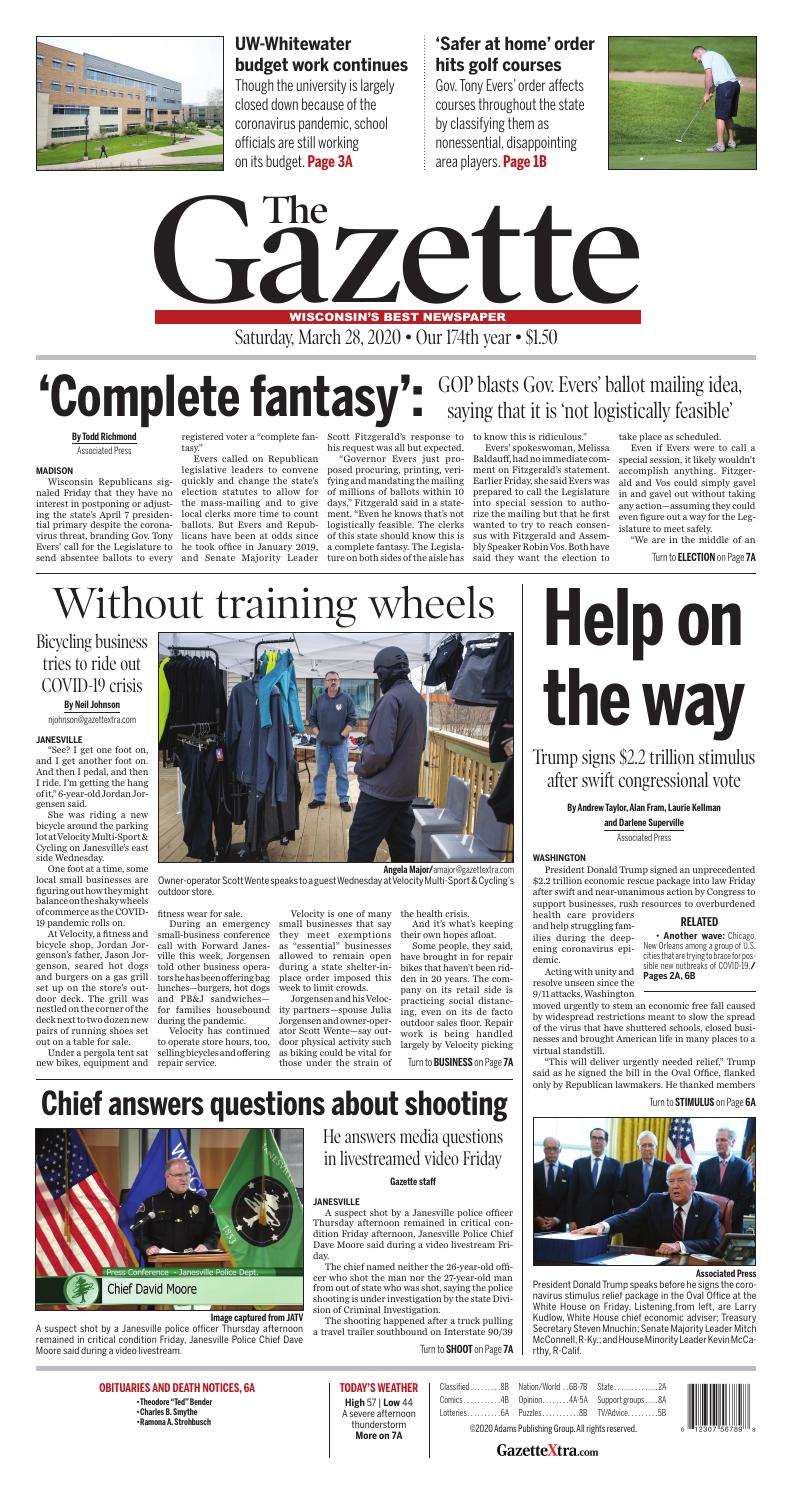 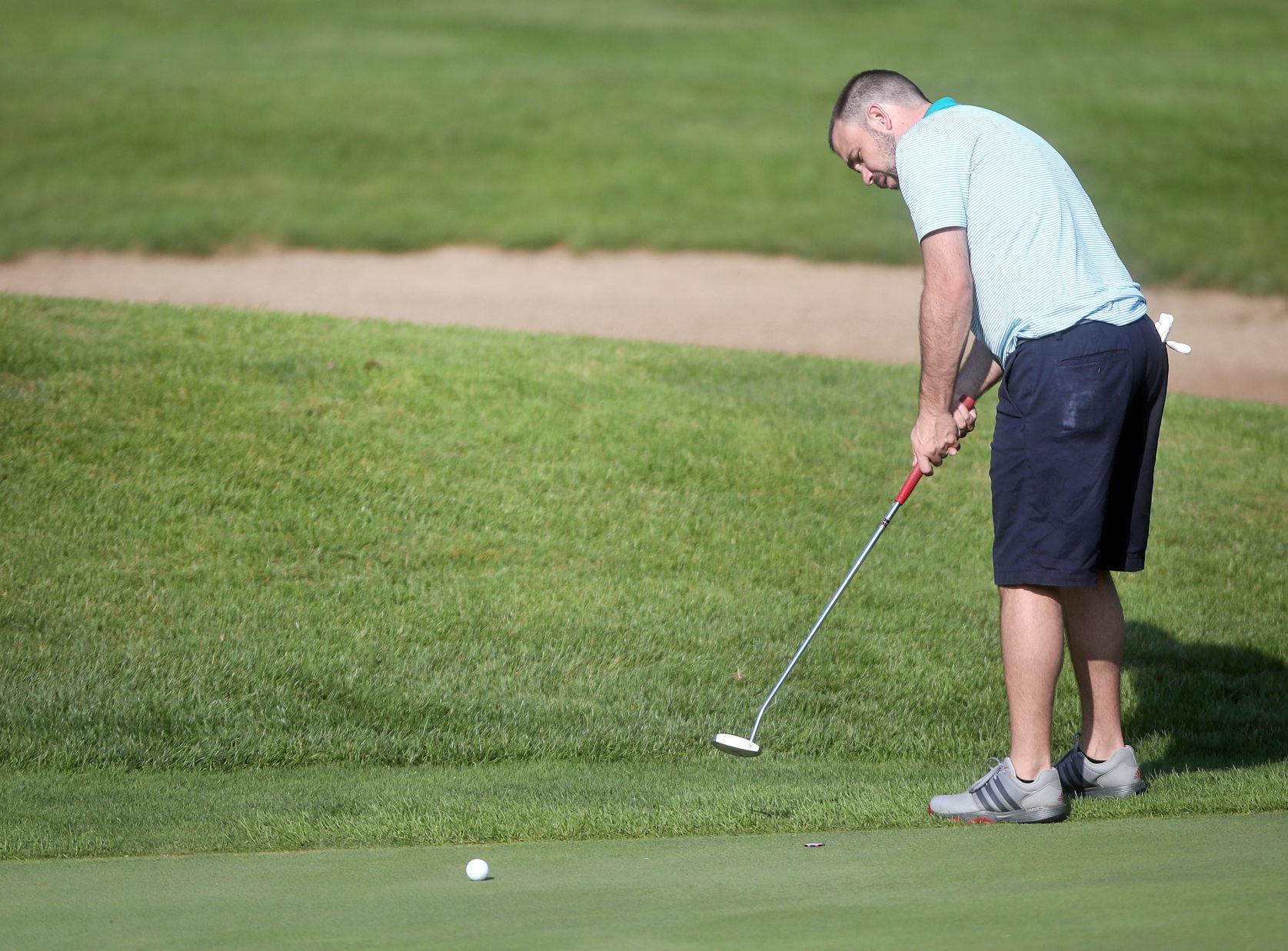 Michael Oellerich putts on the 8th green during the second round of Janesville Men’s City Golf Tournament at Riverside Golf Course on Saturday.

“See? I get one foot on, and I get another foot on. And then I pedal, and then I ride. I’m getting the hang of it,” 6-year-old Jordan Jorgensen said.

She was riding a new bicycle around the parking lot at Velocity Multi-Sport & Cycling on Janesville’s east side Wednesday.

One foot at a time, some local small businesses are figuring out how they might balance on the shaky wheels of commerce as the COVID-19 pandemic rolls on.

At Velocity, a fitness and bicycle shop, Jordan Jorgenson’s father, Jason Jorgenson, seared hot dogs and burgers on a gas grill set up on the store’s outdoor deck. The grill was nestled on the corner of the deck next to two dozen new pairs of running shoes set out on a table for sale.

Under a pergola tent sat new bikes, equipment and fitness wear for sale. 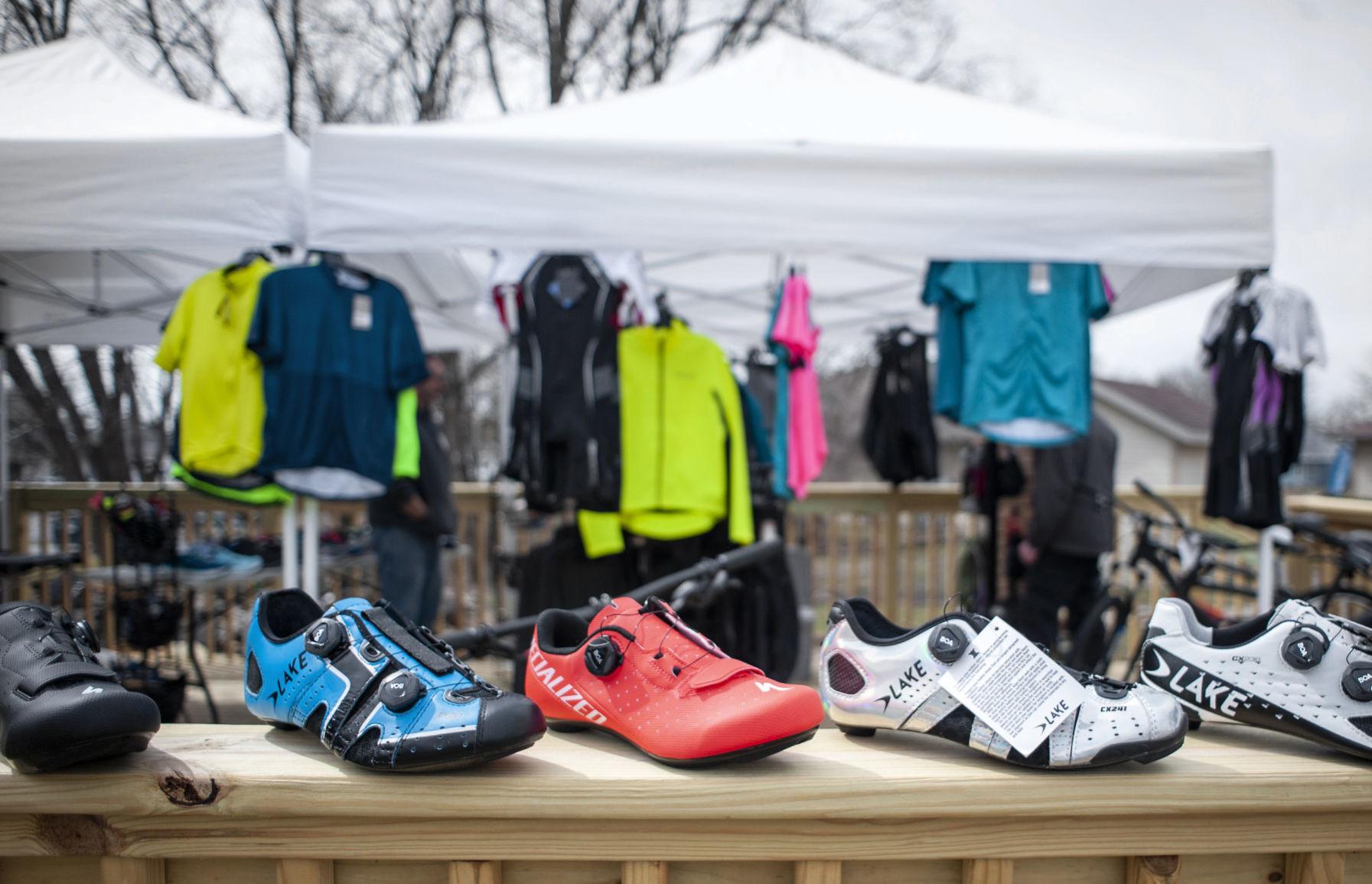 Shoes are displayed outside Wednesday at Velocity Multi-Sport & Cycling in Janesville.

During an emergency small-business conference call with Forward Janesville this week, Jorgensen told other business operators he has been offering bag lunches—burgers, hot dogs and PB&J sandwiches—for families housebound during the pandemic.

Velocity is one of many small businesses that say they meet exemptions as “essential” businesses allowed to remain open during a state shelter-in-place order imposed this week to limit crowds.

The shop’s bag lunches are being offered on a quasi-nonprofit basis, but they’re also aimed at generating foot traffic as people become more leery about venturing out in public. It’s the first time Jorgensen, who also is a rental property manager and operator of a local insurance agency, has donned a grill chef’s hat since he worked as a line cook at a Chi-Chi’s restaurant years ago.

Jorgensen and his Velocity partners—spouse Julia Jorgensen and owner-operator Scott Wente—say outdoor physical activity such as biking could be vital for those under the strain of the health crisis.

And it’s what’s keeping their own hopes afloat.

Some people, they said, have brought in for repair bikes that haven’t been ridden in 20 years. The company on its retail side is practicing social distancing, even on its de facto outdoor sales floor. Repair work is being handled largely by Velocity picking up bikes from residents’ homes and returning them repaired.

The shop is using social media to try to host outdoor events. One such idea: social distance-conscious bike rides that would put small groups of people in single-file, spread-out rides along city bike trails located near Velocity.

“What we’re trying to do here with the lunches and the bicycling itself, for some families, is basically school P.E. class and school lunch, at least until kids are allowed back to school,” he said.

Dozens of small-business operators took part in Forward Janesville’s conference call. Others have essentially shut down while they ride out the state’s partial public lockdown.

Cullen said he temporarily sent home workers in one division—Roundhouse’s shirt and apparel-printing operation on Janesville’s north side—because of a lack of apparel orders from businesses.

In the coming days, many local businesses will face logistical or economic impacts of commerce that has become vapor-locked.

Among countless twists of irony in the COVID-19 crisis, large-scale furloughs or temporary layoffs could now become a flashpoint in the local economy. In the early weeks of 2020, the local unemployment rate remained at 3.5%—about in line with the national average.

Cullen urged small businesses to be as “honest and direct” as possible with employees about staffing and operational decisions.

The COVID-19 crisis has been as big a shock to workers as it has been to business operators.

“We’ve been clear it’s a furlough, not a layoff, because we want to keep them on as an employee. We want them to come back,” Cullen said.

Some of Cullen’s marketing division employees are working from home. Cullen said he is encouraging them to attend teleconference meetings wearing whimsical hats, and he’s stressing they take breaks for outside activities while working from home.

Cullen also advised bosses to keep in touch with furloughed or homebound workers occasionally to try to ease workers’ feelings of isolation.

Those measures can’t fix an epidemic, but Cullen said they might buoy spirits during a scary and uncertain time.

“We’re still here. We’re going to weather this storm. We’ll come back even stronger,” Cullen said. “The flu is contagious, but remember, so is your attitude.”

The chief named neither the 26-year-old officer who shot the man nor the 27-year-old man from out of state who was shot, saying the police shooting is under investigation by the state Division of Criminal Investigation.

The shooting happened after a truck pulling a travel trailer southbound on Interstate 90/39 careened off the Interstate and tumbled down a steep embankment toward Highway 14 below, Moore said.

Officers encountered a man armed with a knife.

“Officers tried verbal persuasion and multiple less lethal methods to apprehend the suspect,” Moore said. “The suspect continued to be a threat to officers and the community, and a Janesville police officer fired his duty weapon and struck the suspect.”

Officers performed life-saving measures before the man was transported to a hospital for treatment for injuries suffered in the shooting and from the traffic crash.

The man was taken into custody about five minutes after officers arrived for the report of a traffic crash, Moore said.

The officer, who has been with the police department for four years, also was checked at the hospital “as a matter of protocol” and was released.

The officer is on administrative duties while the investigation proceeds, Moore said.

The cause of the crash is not clear, Moore said.

Moore declined to answer questions about why the suspect was upset and armed with a knife. He said he didn’t know if the man shot was under the influence of drugs or alcohol.

No media were present while the chief answered questions emailed by the media 90 minutes earlier. The chief spoke by video rather than at a live press conference “due to concerns regarding the ability to properly maintain the recommended social distance due to COVID-19,” according to a police department news release.

The Friday shooting was the first involving Janesville police since 2004, Moore said.

The Janesville Police Department “over the years” has invited the state Division of Criminal Investigation to share with officers what it looks like to have an officer-involved shooting investigation. 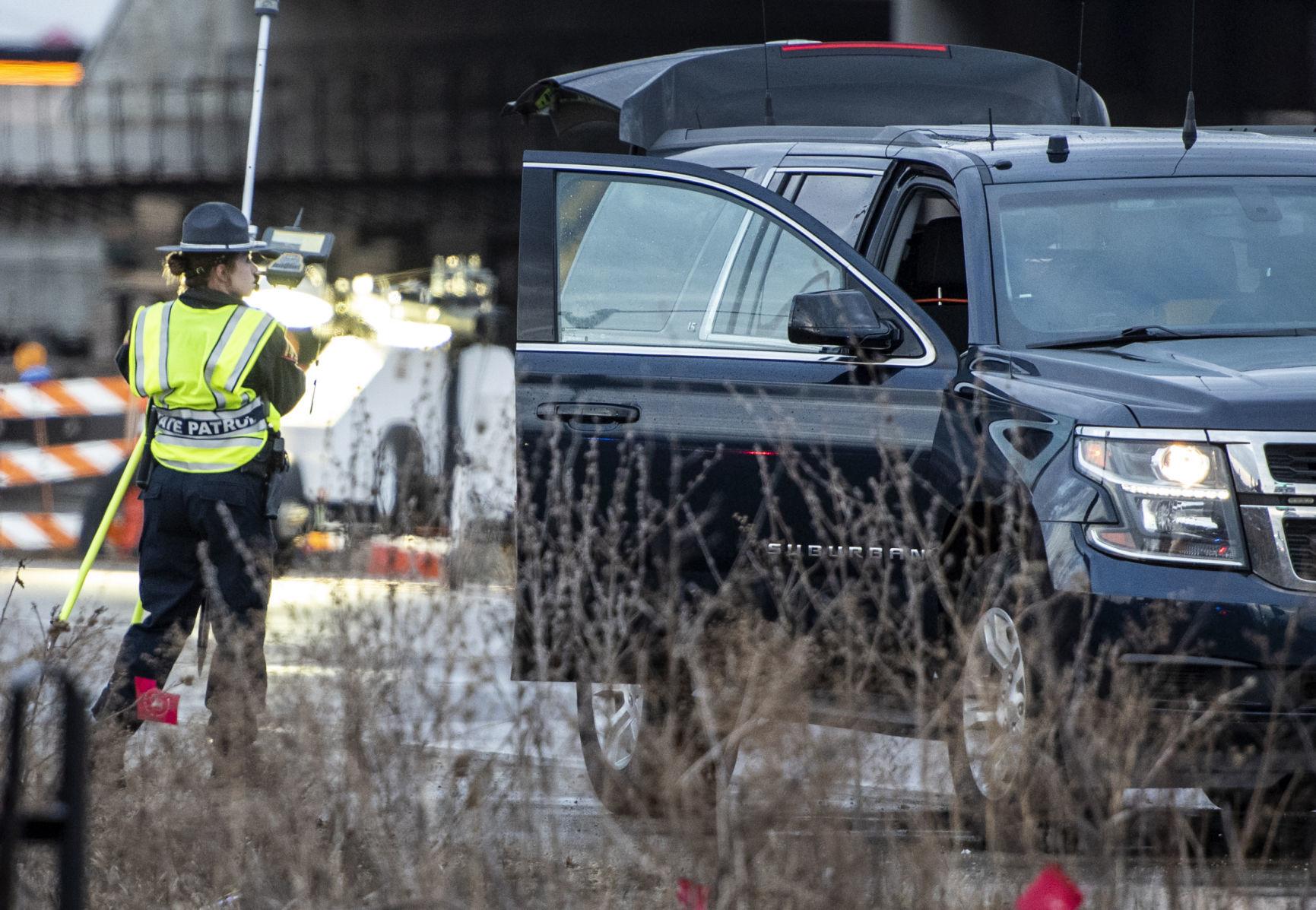 Investigators work into the evening at the scene of an officer-involved shooting Thursday in Janesville.

“I can tell you, it’s very different from what our offices are accustomed to. We turn the entire investigation over to the Division of Criminal Investigation. Our officers then become witnesses, if you will. They need to be separated. They are interviewed by the department of investigations. In some cases, they are given their Miranda warnings. In some cases, their weapons are taken. So it’s a very different experience, but we’ve prepped our officers for that and shared with them what that was going to look like when this day would come,” Moore said.

Moore pointed out the police shooting came at a time of change—“more change than I have ever seen at the Janesville Police Department”—while the community deals with fallout from the COVID-19 pandemic, including the police department dispersing its officers for the first time to substations.

“So the things I’ve asked of these officers and the challenge that I had for this organization is unprecedented, and then comes Thursday when we have an officer-involved shooting. These are very emotional, time-consuming. We need to get it right. And to lay that officer-involved shooting on top of all the organizational change and other concerns in the community was substantial,” Moore said.

Police have asked anyone with information about the Thursday traffic crash that ended with a police shooting at Highway 14 and Interstate 90/39 to call Janesville Area CrimeStoppers at 608-756-3636 or Janesville police at 608-757-2244. 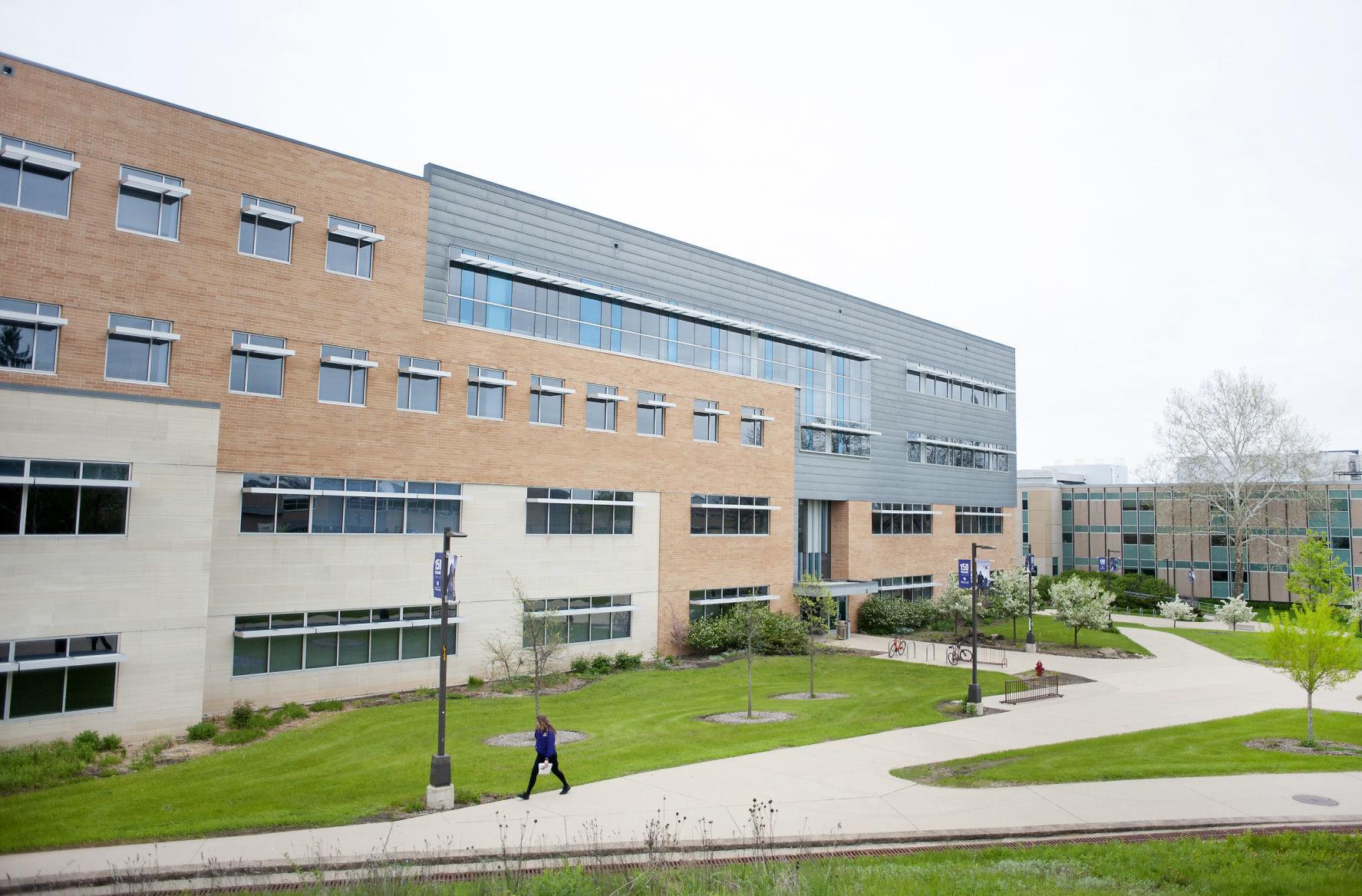 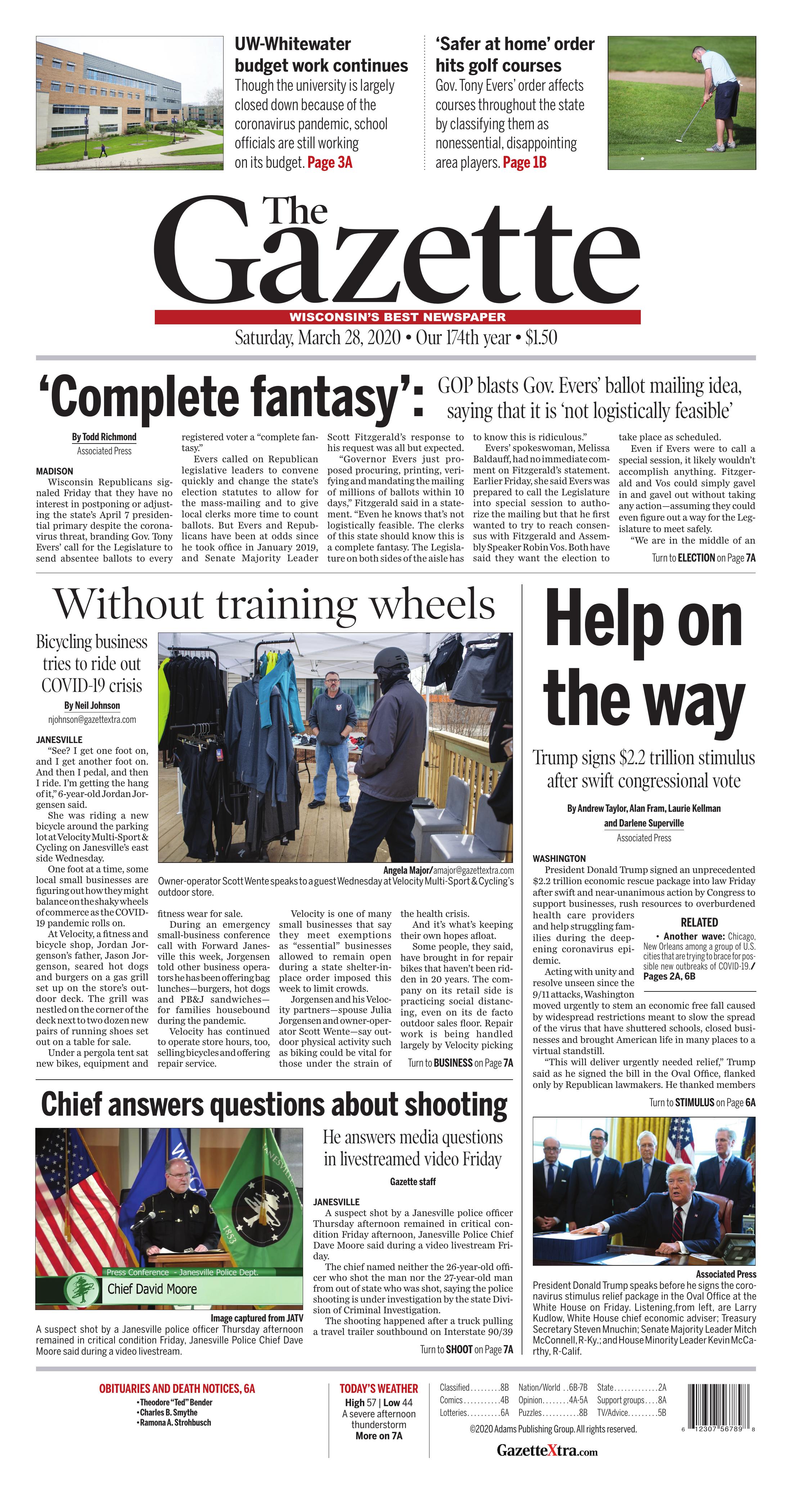