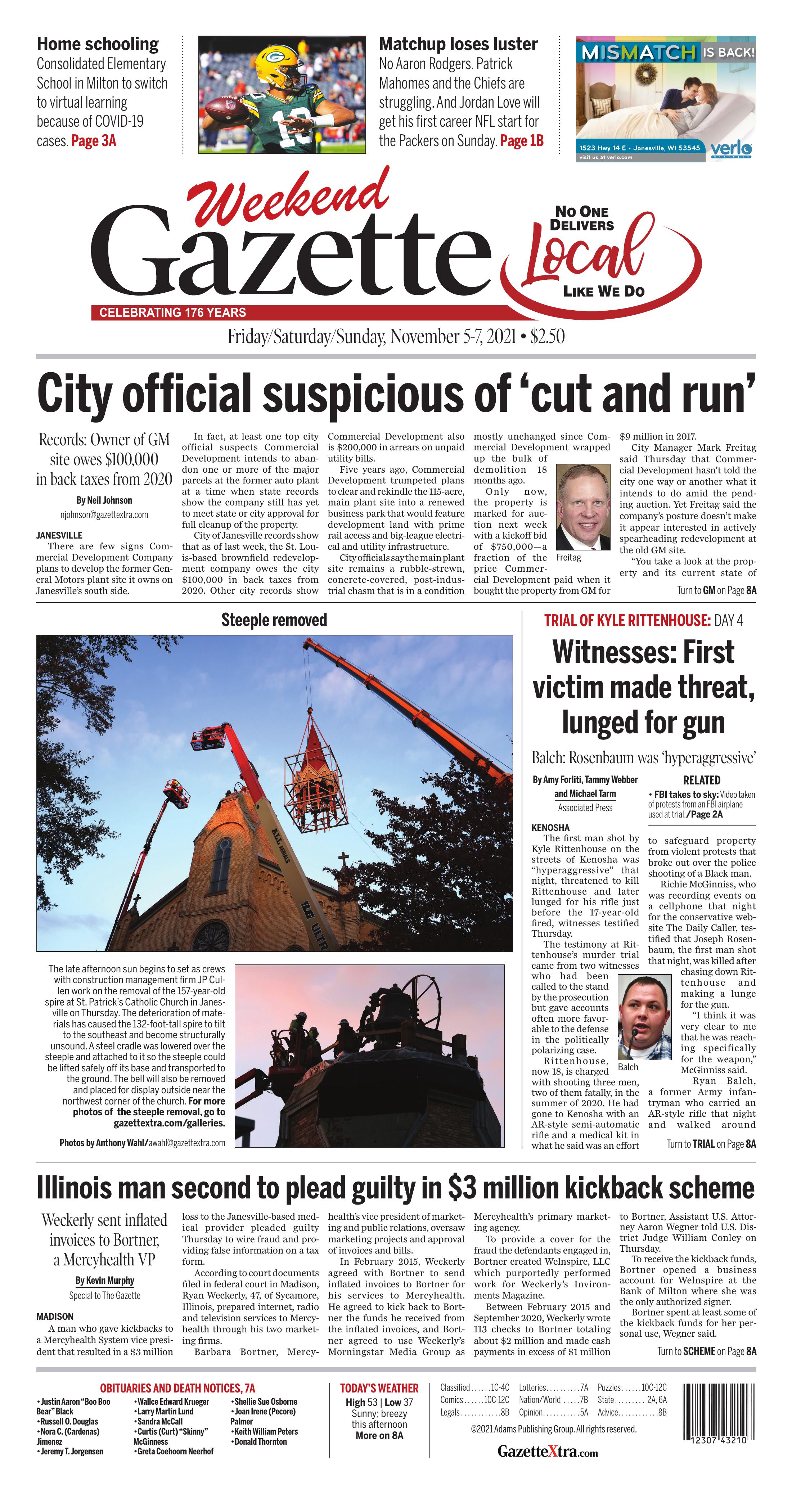 An entry to the cleared former General Motors property on Janesville’s south side is blocked by barriers and gates in a fall 2021 Gazette file photo. City of Janesville officials say site owner Commercial Development hasn’t paid its 2020 property taxes and utility bills on the site and that it is ignoring city requirements that it clear out acres of concrete slabs that remain in the ground even after Commercial Development removed the 2 million-square-foot former auto plant from the massive site.

There are few signs Commercial Development Company plans to develop the former General Motors plant site it owns on Janesville’s south side.

In fact, at least one top city official suspects Commercial Development intends to abandon one or more of the major parcels at the former auto plant at a time when state records show the company still has yet to meet state or city approval for full cleanup of the property.

City of Janesville records show that as of last week, the St. Louis-based brownfield redevelopment company owes the city $100,000 in back taxes from 2020. Other city records show Commercial Development also is $200,000 in arrears on unpaid utility bills.

Five years ago, Commercial Development trumpeted plans to clear and rekindle the 115-acre, main plant site into a renewed business park that would feature development land with prime rail access and big-league electrical and utility infrastructure.

City officials say the main plant site remains a rubble-strewn, concrete-covered, post-industrial chasm that is in a condition mostly unchanged since Commercial Development wrapped up the bulk of demolition 18 months ago.

Only now, the property is marked for auction next week with a kickoff bid of $750,000—a fraction of the price Commercial Development paid when it bought the property from GM for $9 million in 2017.

City Manager Mark Freitag said Thursday that Commercial Development hasn’t told the city one way or another what it intends to do amid the pending auction. Yet Freitag said the company’s posture doesn’t make it appear interested in actively spearheading redevelopment at the old GM site.

Freitag said city records show Commercial Development apparently has ignored two mailed notices from the city’s building department that it is in violation of municipal commercial site cleanup codes over the nearly 100 square acres of concrete and rubble the company has left capping the bulk of the former main plant site.

The city has also warned Commercial Development that it risks losing access to $500,000 in state cleanup grant funds the Wisconsin Economic Development Corporation awarded the company through the city to remove concrete at the main plant site.

The lone recent communique from Commercial Development, Freitag said, was a notice in September to the city that the owner intends this month to try and auction off both the main GM site and the JATCO site.

In a Sept. 17 letter from Freitag to Commercial Development obtained by The Gazette, Freitag wrote that he and other city officials were “surprised” by the auction.

“We were under the impression that Commercial Development Company was going to carry the site through some level of redevelopment, and our community has been eagerly and patiently anticipating a revitalization of the properties,” he wrote.

Bidding is slated to close next Thursday, although it remains to be seen whether the auction will move one or both the major parcels at the former plant site into the hands of a new owner.

Officials from Commercial Development did not immediately respond to a Gazette inquiry about the pending auction and what the company intends to do about its unpaid city bills and lingering code violations.

Freitag said he and other city staff met Wednesday with state Department of Natural Resources officials working with Commercial Development on a cleanup plan that could bring the main plant site up to environmental standards. The DNR wants to see that much of the site remains capped, covered and undisturbed.

Earlier this year, the DNR appeared to endorse the company’s plans to leave in place much of the concrete slab as a cap over potentially contaminated soil and as a base for new industrial developments.

Commercial Development is now requesting from the DNR a letter of closure to clear the property, but Freitag said it could take two to four months for the DNR to respond.

Freitag said the city understands the DNR is adhering to its own rules under state law on industrial cleanup. But the agency’s stance is at odds with the city’s orders for Commercial Development to remove the old factory slabs and piles of rubble throughout the main plant site.

Through written correspondence and conversations with Commercial Development, the city has made clear it expects the company to remove concrete slabs and restore the massive acreage to a greenspace.

“We want it capped with grass on top,” Freitag said. He called the rubble-strewn, massive expanse of concrete “an eyesore for the community.”

Freitag said if Commercial Development sells off part or all the property and/or leaves the main plant site behind before the DNR decides whether to clear the north plant portion, the city—and taxpayers—could get saddled with a huge vacant site that requires further environmental cleanup.

That specter was the main reason the city fleshed out an overlay district that spelled out the rules for demolition and redevelopment prior to GM selling off the defunct, circa-1919 auto plant.

Freitag said the city is now in a holding pattern until it is clear whether part of the GM property will soon be sold. Meanwhile, Freitag said, the city has been talking to state lawmakers about the situation and working with the DNR over possible grants for cleanup, although Commercial Development has not shared with the city what amount of cleanup remains or what that might cost.

During its demolition of the former GM plant buildings, Commercial Development scrapped and sold off the plant’s structure and equipment, including tons of metal, robotic arms and other items.

On Commercial Development’s website, the company boasts of its many redevelopment projects over the last 30 years, showing aerial views of former factory parcels redeveloped with new commercial properties. 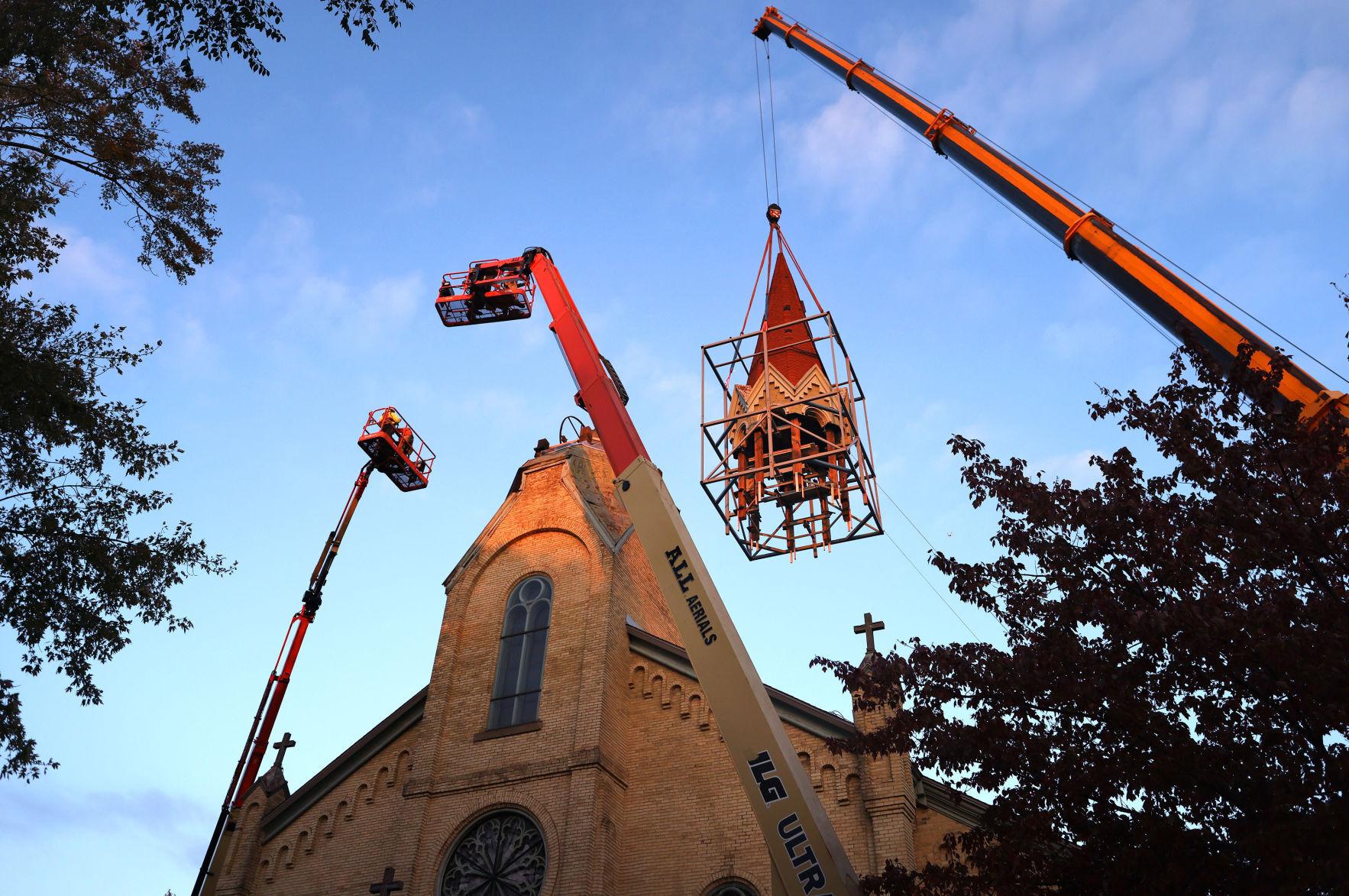 The late afternoon sun begins to set as crews with construction management firm JP Cullen work on the removal of the 157-year-old spire at St. Patrick Catholic Church on Thursday, Nov. 4. The deterioration of materials has caused the 132-foot-tall spire to tilt to the southeast and become structurally unsound. A steel cradle was lowered over the steeple and attached to it, so the steeple can be lifted safely off its base. The bell will also be removed and placed for display outside near the northwest corner of the church. 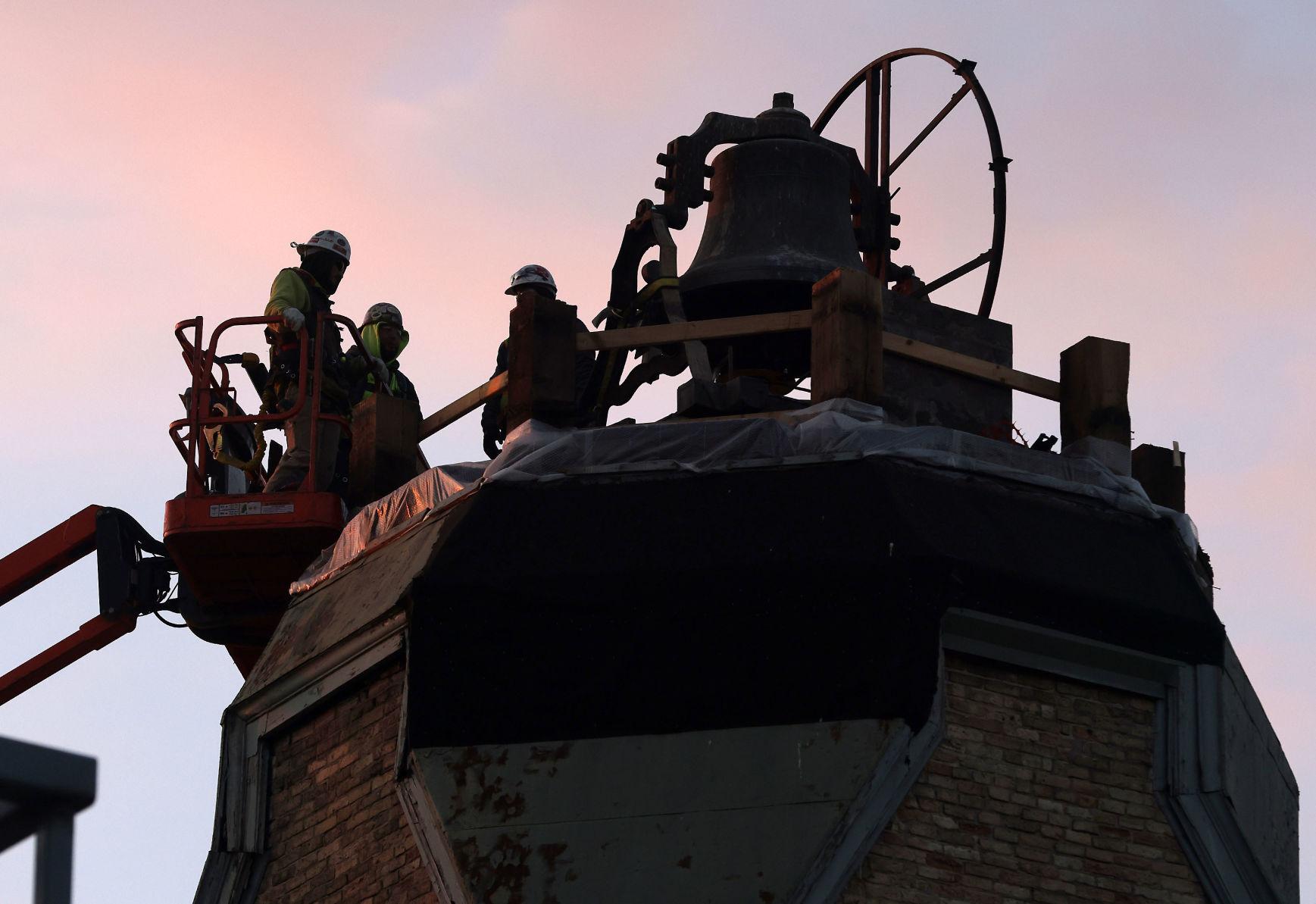 Crews with construction management firm JP Cullen work on the removal of the 157-year-old spire at St. Patrick Catholic Church on Thursday, Nov. 4. The deterioration of materials has caused the 132-foot-tall spire to tilt to the southeast and become structurally unsound. A steel cradle was lowered over the steeple and attached to it, so the steeple can be lifted safely off its base. The bell will also be removed and placed for display outside near the northwest corner of the church.

A man who gave kickbacks to a Mercyhealth System vice president that resulted in a $3 million loss to the Janesville-based medical provider pleaded guilty Thursday to wire fraud and providing false information on a tax form.

According to court documents filed in federal court in Madison, Ryan Weckerly, 47, of Sycamore, Illinois, prepared internet, radio and television services to Mercyhealth through his two marketing firms.

To provide a cover for the fraud the defendants engaged in, Bortner created Welnspire, LLC which purportedly performed work for Weckerly’s Invironments Magazine.

To receive the kickback funds, Bortner opened a business account for Welnspire at the Bank of Milton where she was the only authorized signer.

Bortner spent at least some of the kickback funds for her personal use, Wegner said.

Weckerly made the check payments to Welnspire through Blank Slate Media LLC, a company he created to facilitate the fraud. He opened a bank account for Blank Slate in Sycamore where only he and his wife were authorized signers.

In October 2020, Weckerly substantially underreported on a 1099 IRS form the income he paid Bortner. The act resulted in Weckerly being charged with filing a false tax form.

In pleading guilty Thursday, Weckerly admitted to participating in the kickback scheme and underreporting the amount he paid Bortner on a 1099 form.

Weckerly also faces restitution orders for the $3.136 million loss to Mercyhealth and the $30,419 loss to the IRS.

Bortner, of Milton, is no longer a Mercyhealth employee. She pleaded guilty last month to tax evasion and wire fraud and is to be sentenced by Conley on Feb. 17. She faces similar penalties as Weckerly. And like Weckerly, she has been released on standard conditions.

Both defendants face restitution orders. The amount they will be required to pay will be set at their sentencing hearings or at a later date by the court.

After the Thursday hearing, Wegner said neither defendant has repaid any money to Mercyhealth or the IRS. He also said Bortner and Weckerly are equally culpable for the scheme to defraud Mercyhealth, but more information about the offense would come out at their sentencings.