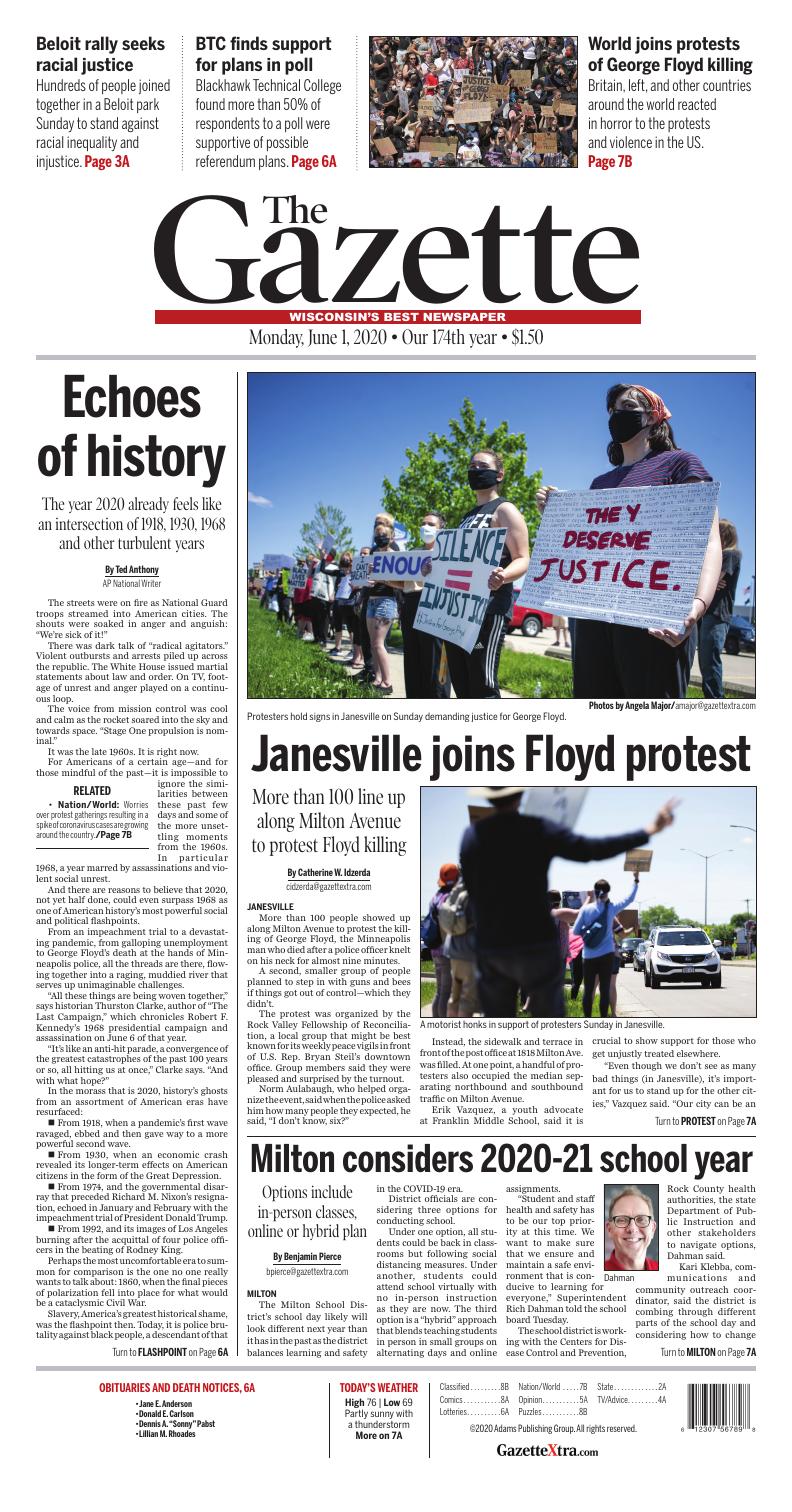 More than 100 people showed up along Milton Avenue to protest the killing of George Floyd, the Minneapolis man who died after a police officer knelt on his neck for almost nine minutes.

A second, smaller group of people planned to step in with guns and bees if things got out of control—which they didn’t.

The protest was organized by the Rock Valley Fellowship of Reconciliation, a local group that might be best known for its weekly peace vigils in front of U.S. Rep. Bryan Steil’s downtown office. Group members said they were pleased and surprised by the turnout.

Norm Aulabaugh, who helped organize the event, said when the police asked him how many people they expected, he said, “I don’t know, six?” 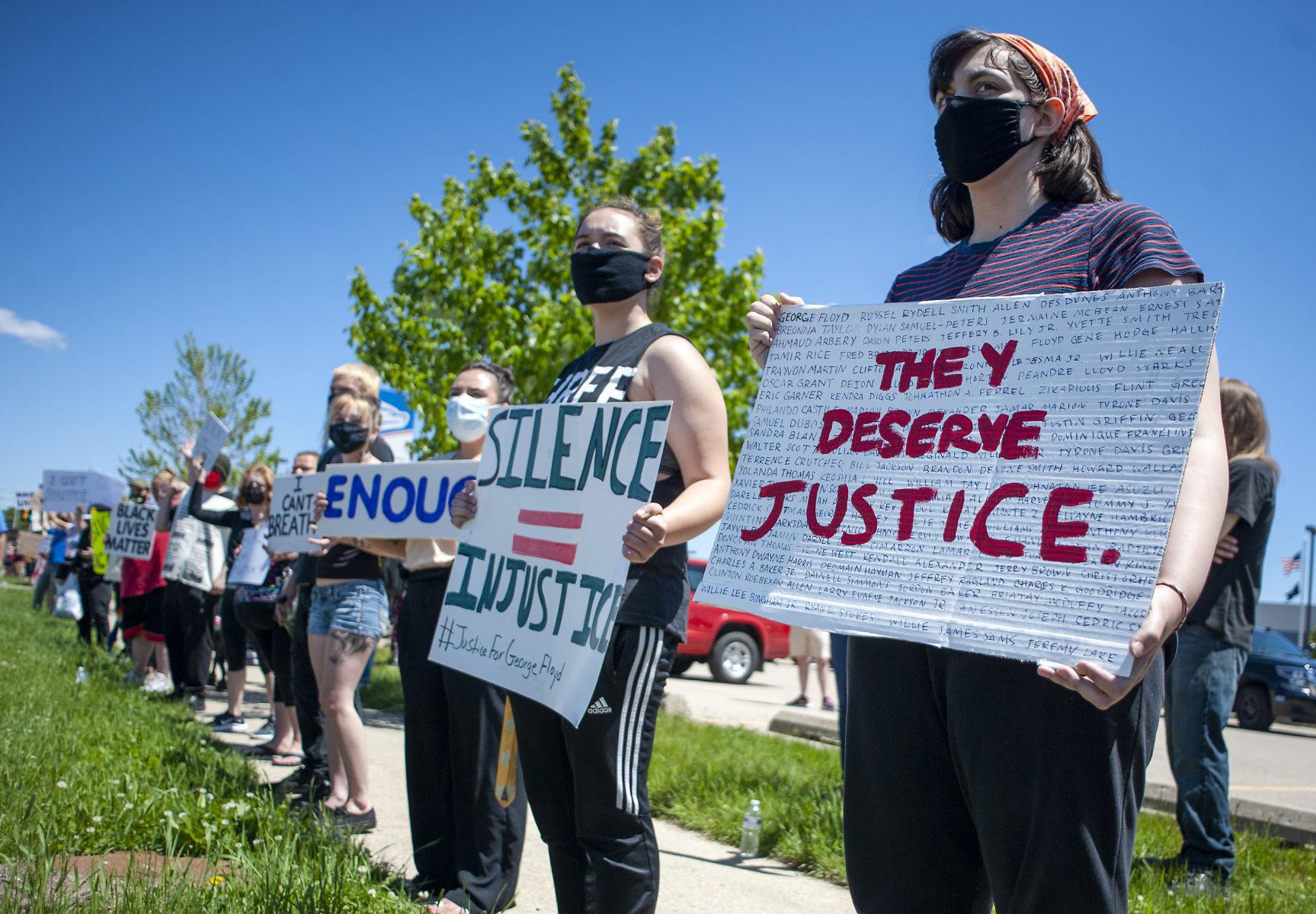 Instead, the sidewalk and terrace in front of the post office at 1818 Milton Ave. was filled. At one point, a handful of protesters also occupied the median separating northbound and southbound traffic on Milton Avenue.

Erik Vazquez, a youth advocate at Franklin Middle School, said it is crucial to show support for those who get unjustly treated elsewhere.

“Even though we don’t see as many bad things (in Janesville), it’s important for us to stand up for the other cities,” Vazquez said. “Our city can be an example of what it is to actually be a community helping each other, a community working with the police rather than fearing them.”

Still, it’s wrong for people to think that because it doesn’t happen here, it’s not an issue, he said. African American and Hispanic men feel like targets, whether they are out for a jog or in police custody.

Vazquez, a former Marine, said he went to the rally in honor of his people, his students and Black Lives Matter.

Steve Atkinson of Janesville said he came because enough was enough.

“For years, I’ve watched injustice after injustice stack up and nothing done,” Atkinson said. “I’ve seen those that are underprivileged be punished exponentially more than those who are not.”

Watching George Floyd die on video made him wonder what kind of world he was leaving for his children. 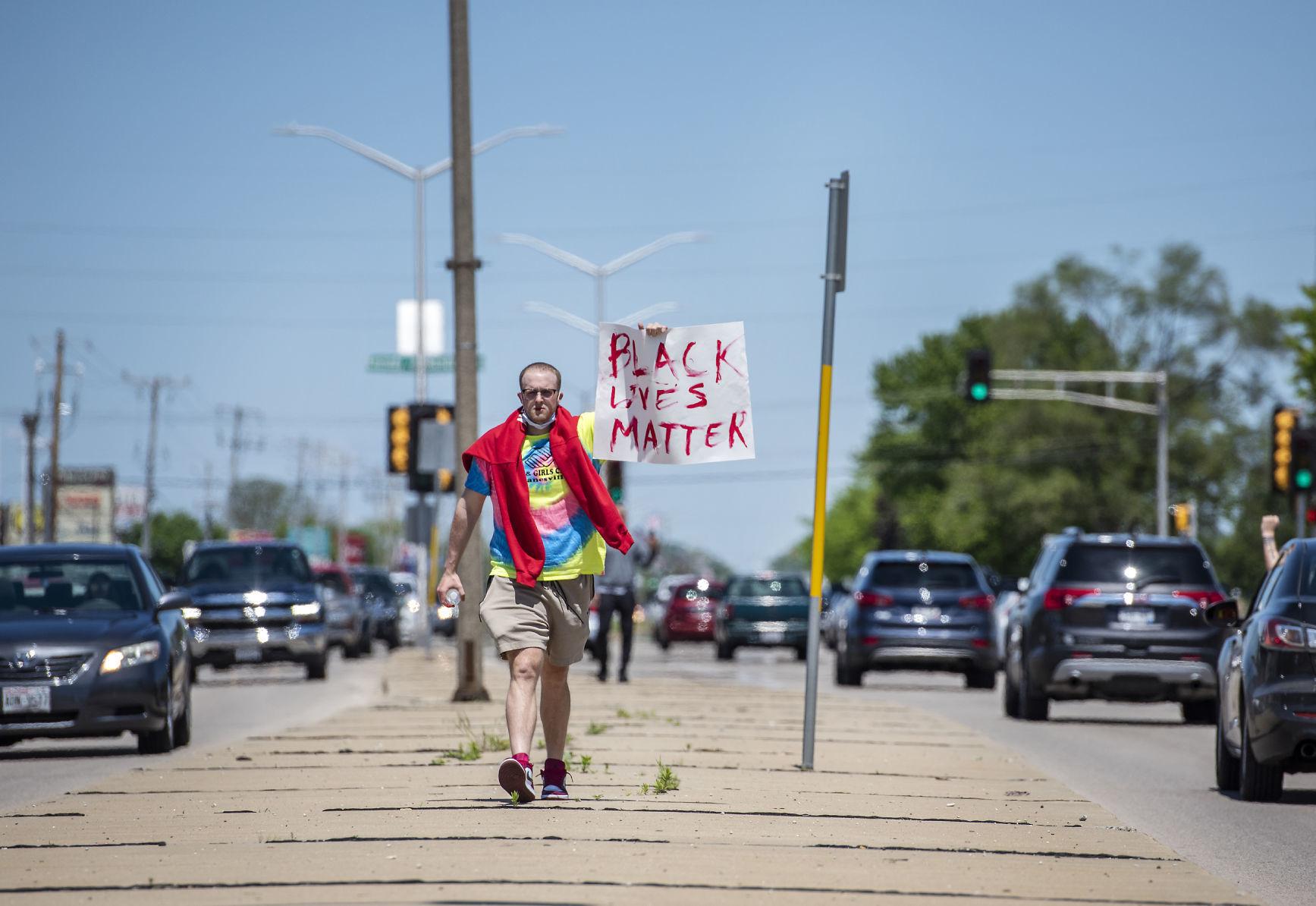 Drew Eppihimer displays a sign as he walks along the median of Milton Avenue during a protest Sunday in Janesville. Eppihimer, who works at the Boys & Girls Club of Janesville, said he received mostly support from drivers passing by. ‘Me as a white person, I should be out here all the time,’ he said.

Kathy Holcombe, a member of the Rock Valley Fellowship of Reconciliation, said she was worried about the unrest that has taken place in other cities. In Madison; Rockford, Illinois; and other places, the peaceful protests have devolved into physical confrontations and looting.

Big Lots, a retailer located in the same strip mall as the post office, was closed for the day. An employee who declined to be identified said the corporate office asked them to move the items from the front of the store and close for the day.

The Janesville Police Department had two officers present. A Rock County sheriff’s deputy was there, as well.

They were backed up by a variety of individuals who said they were ready to step in if needed.

Shawn, from Racine, and his friend Owen, from Janesville, both had sidearms and said they would assist the police if things got out of control. The two men declined to give their last names and stood in the CVS parking lot because guns are not allowed on federal property.

Shawn pointed to the protests elsewhere in the country where police were overwhelmed by protestors.

In one city, a person took an AR-15 out of the back of a squad car, and another armed civilian took the gun away from him.

“I don’t want to see some out-of-state or out-of-towner start something here,” Shawn said.

Both men said they don’t have any crowd control training, but they have been to the firing range and know how to handle their weapons.

When asked if the police needed backup, police Sgt. Dean Sukus said he felt police had “things under control here.” 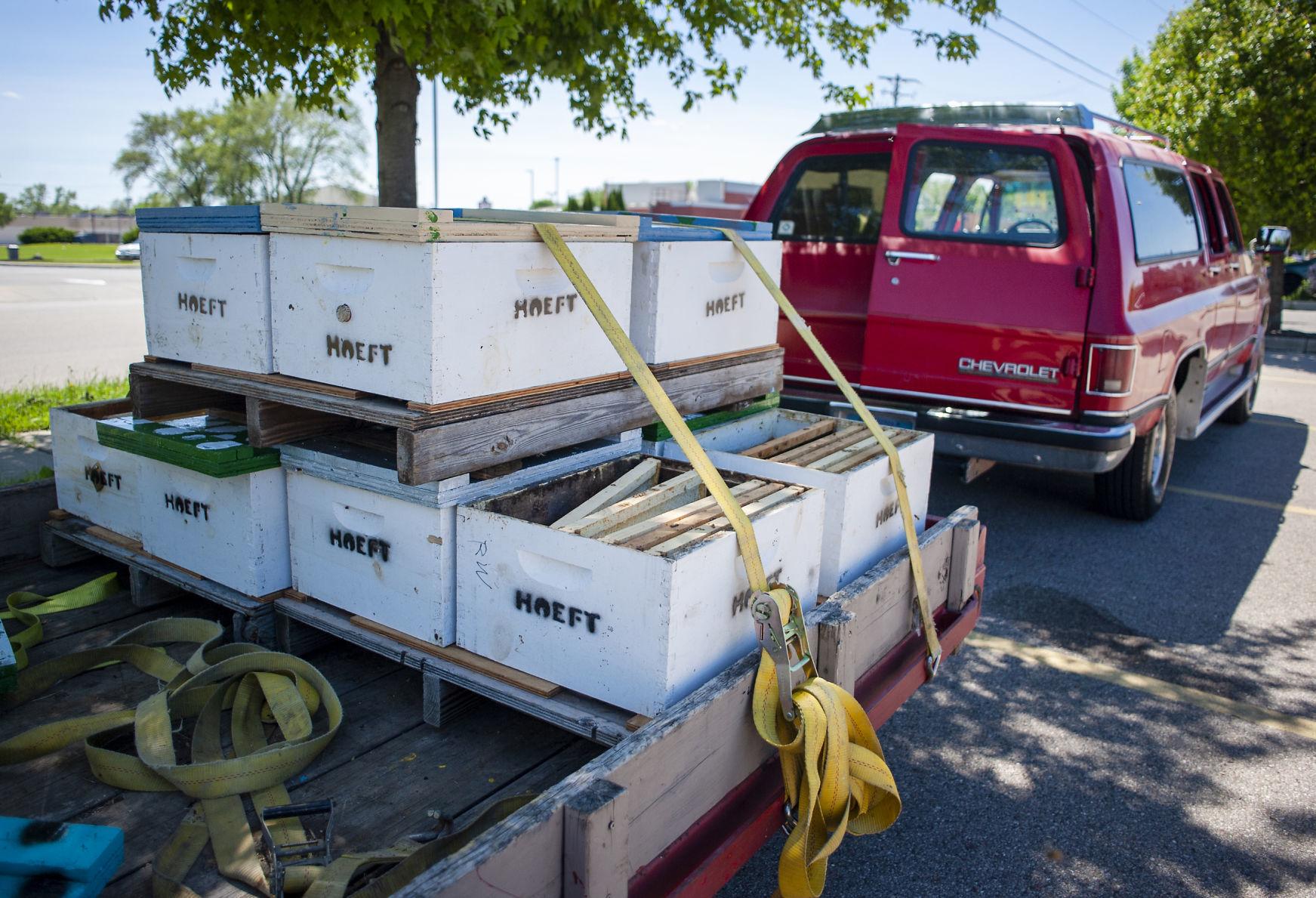 A trailer carrying honeybees is parked Sunday near Big Lots in Janesville, not far from where people protesting the killing of George Floyd was being held.

Greg Hoeft of Janesville brought 12 boxes of bees to the event.

The bees were on a trailer that he towed into the post office parking lot, just behind the protestors.

Hoeft, whose name was on the side of the bee boxes, posted his plans on Facebook: “The riot control bees are in their holding yard waiting to clear the streets of Janesville and keep peace to this county. I’m willing to bring them in and kick them over if things get out of control.”

A photo shows Hoeft loading the boxes of bees on a trailer.

Police learned that he planned to release the bees if the protest became unruly.

Hoeft was asked to leave and did, Sukus said.

The Milton School District’s school day likely will look different next year than it has in the past as the district balances learning and safety in the COVID-19 era.

Under one option, all students could be back in classrooms but following social distancing measures. Under another, students could attend school virtually with no in-person instruction as they are now. The third option is a “hybrid” approach that blends teaching students in person in small groups on alternating days and online assignments.

“Student and staff health and safety has to be our top priority at this time. We want to make sure that we ensure and maintain a safe environment that is conducive to learning for everyone,” Superintendent Rich Dahman told the school board Tuesday.

The school district is working with the Centers for Disease Control and Prevention, Rock County health authorities, the state Department of Public Instruction and other stakeholders to navigate options, Dahman said.

Kari Klebba, communications and community outreach coordinator, said the district is combing through different parts of the school day and considering how to change them.

She said social distancing might be easier in high school classrooms than in younger grades such as 4K, but distance between students will be key moving forward.

“First and foremost, all of the local health officials and the Rock County Health Department were very specific that social distancing is everything,” she said.

Shared spaces such as water fountains likely will be closed, and officials are discussing what to do with shared materials such as paints and crayons.

Other considerations under discussion include symptom screening of students, advanced cleaning techniques, acquisition of personal protective equipment and how to handle requests to use school property for events.

The district also is talking with other area districts about how best to return in fall.

Which option the district chooses likely will depend on the coronavirus and if or when a second wave of the virus hits, Dahman said.

The district has learned a lot from virtual learning this year, he said.

“One of the considerations ... is how do we continue to meet the academic needs for all students, because we know that some students learn well remotely, and others need that more face-to-face atmosphere,” Dahman said. “And how are we meeting the social-emotional need for all of our students because that need has changed and increased because of the situation.”

Staff will receive professional development in how to deliver education in online learning and hybrid setups.

Board members Mike Hoffman, a retired teacher, and Diamond McKenna asked how small classrooms in older elementary school buildings, such as Milton East and Milton West, would work for socially distanced learning.

Dahman said the size of classrooms might require the district to adopt the hybrid model of teaching, but no decisions have been made.

“Especially in our older buildings, it’s a tight squeeze when we’re not worried about keeping people 6 feet apart,” Dahman said.

“So putting that in place will be a struggle for us, and that might lead to our need to bring students in in smaller groups or some type of rotation system in the fall.”

Board President Joe Martin asked about additional cleaning staff, and Dahman said that is one consideration for the district.

McKenna asked that district officials be on the lookout for area PPE giveaways and other help.

Dahman said as the district gets more information from health officials and COVID-19 runs its course, the district’s approach could change. 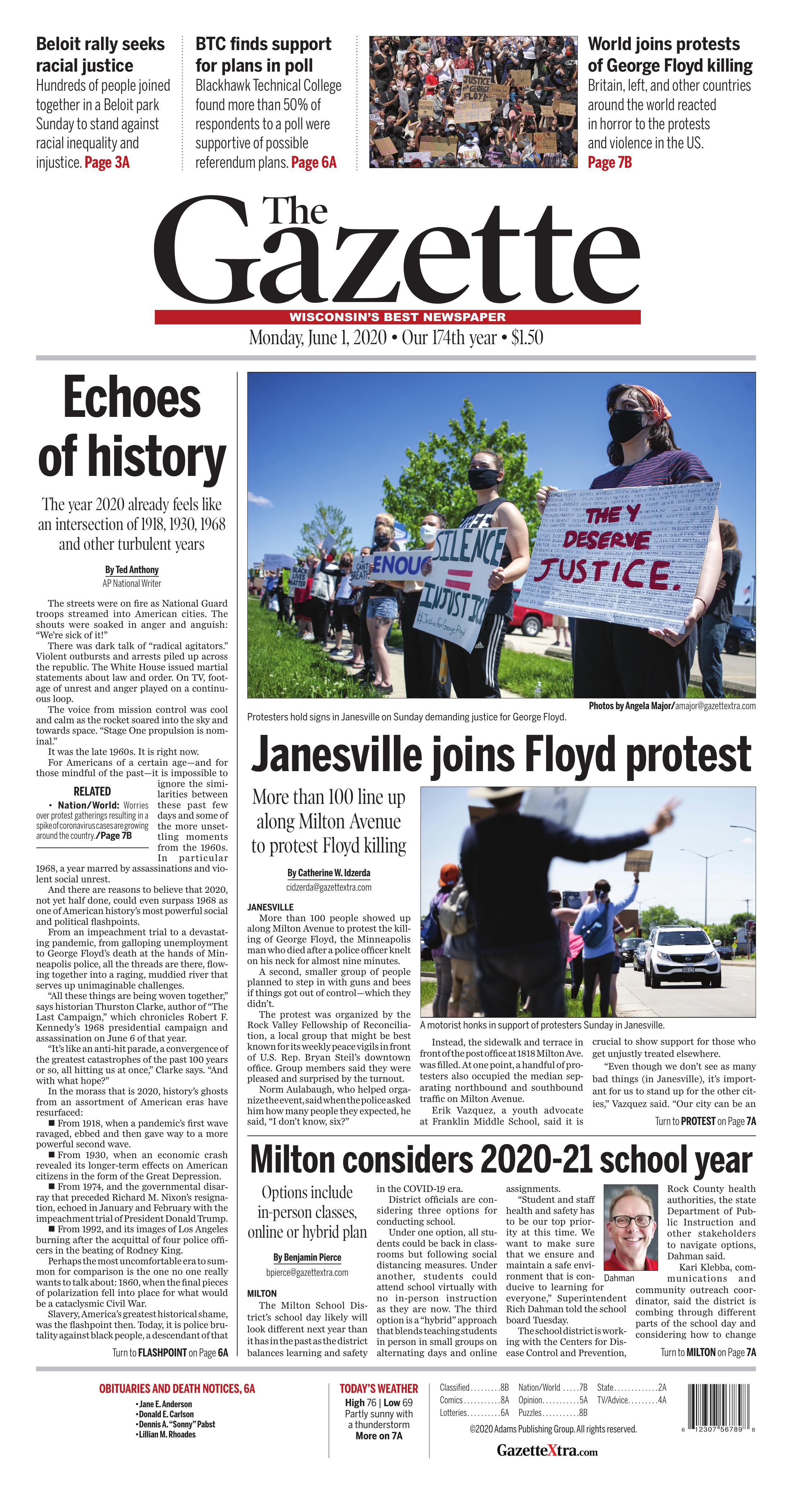