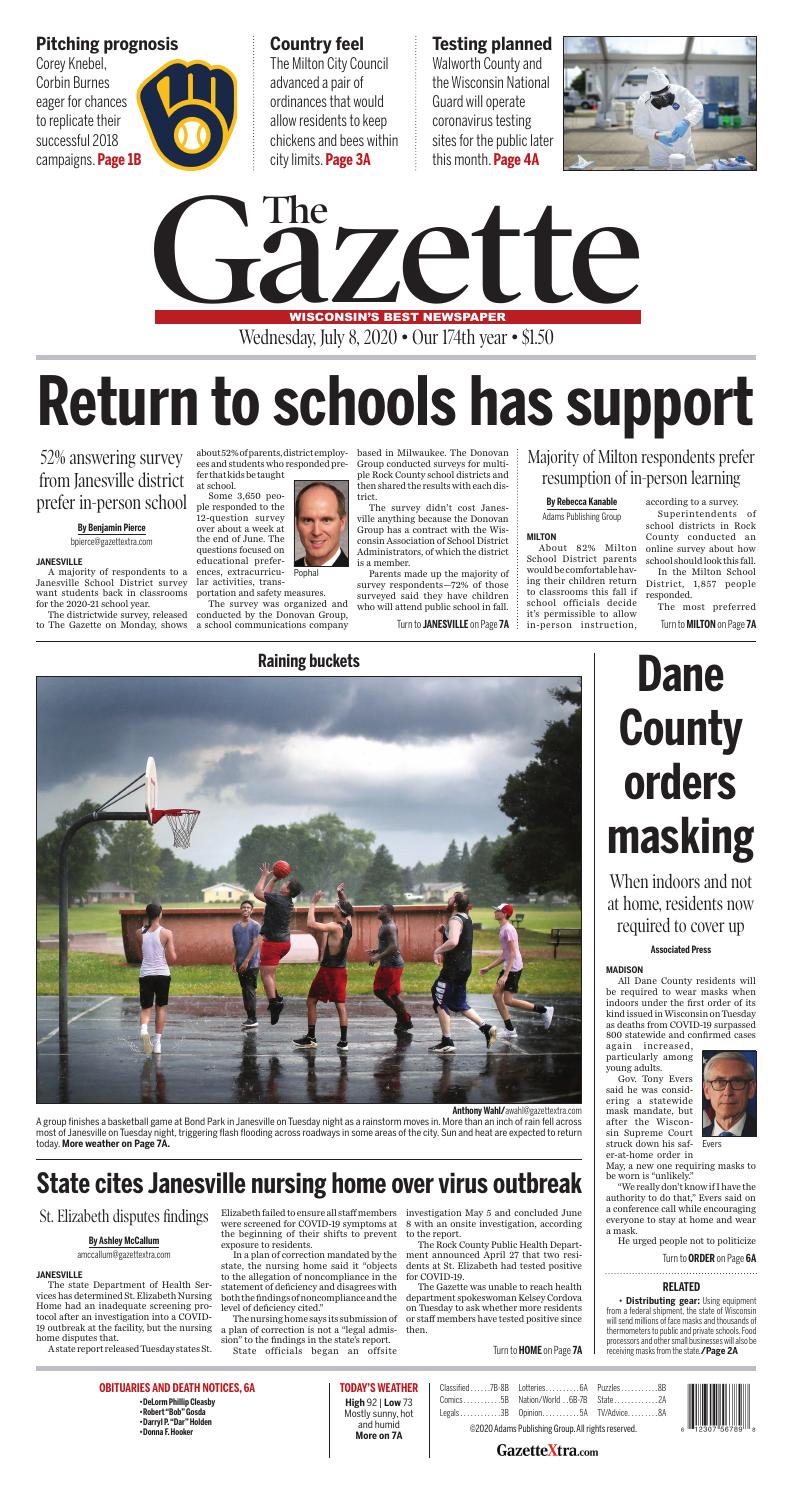 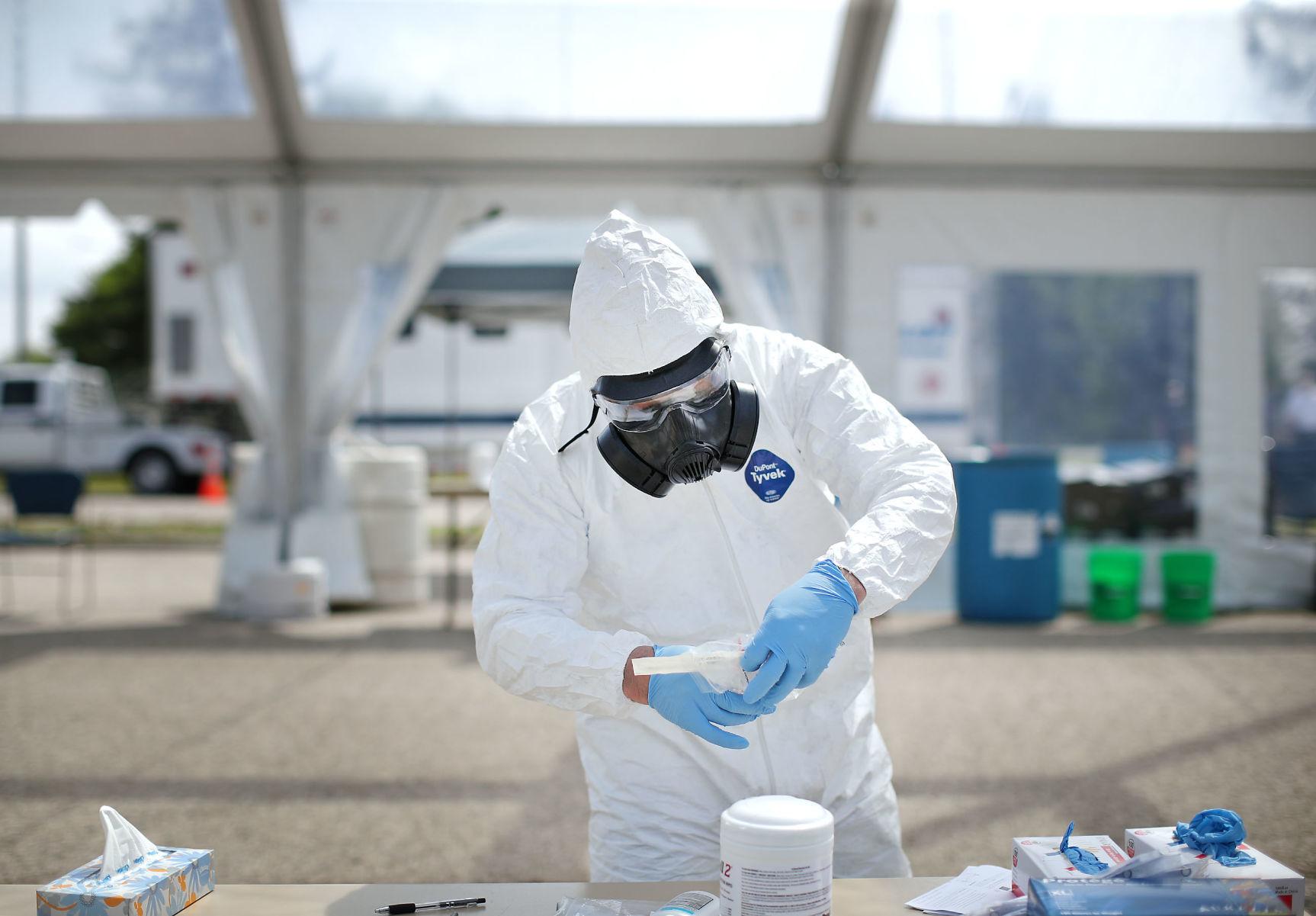 A member of the Wisconsin National Guard prepares for the start of drive-through COVID-19 testing at Krueger Park in Beloit on Friday.

About 82% Milton School District parents would be comfortable having their children return to classrooms this fall if school officials decide it’s permissible to allow in-person instruction, according to a survey.

Superintendents of school districts in Rock County conducted an online survey about how school should look this fall.

The most preferred educational delivery option (about 53%) is “all learning is conducted in school.”

Next (about 36%) is a hybrid model that allows students to participate both in person and online (Children would physically attend school at different times or on different days.).

About 9% prefer all learning to be done remotely.

Of those who responded to the survey, 75% will have school-age children in the fall, and about 70% have children attending a public school. About 14% of the respondents are employed by a public school district.

Of those with school-age children, about 59% are in elementary school, 37% are in high school, 28% will be in middle school and about 12% will be in preschool.

Wisconsin Department of Health Services and federal Centers for Disease Control and Prevention guidance being followed is important to the comfort of about 60%. About the same percent said maintaining social distancing protocols, where reasonably possible, would make them feel more comfortable.

Superintendent Rich Dahman said: “We are very glad to see this level of response to the county-wide survey. The district is grateful to have such an engaged community. As we continue in our planning for the coming school year, this information is greatly appreciated.”

The Milton School District administration team plans to present an outline of its reopening plan during the school board meeting at 6:30 p.m. Monday at the district office, 448 E. High St. The meeting also will be available through Google Meet.

About 80% of Janesville School District parents would be comfortable with their children returning to classrooms this fall, according to a districtwide survey.

Some 3,650 people responded to the 12-question survey over about a week at the end of June. The questions focused on educational preferences, extracurricular activities, transportation and safety measures.

When broadened to include parents, district employees and students, the survey indicates 52% would prefer that kids be taught at school.

The survey was organized and conducted by the Donovan Group, a school communications company based in Milwaukee. The Donovan Group conducted surveys for multiple Rock County school districts and then shared the results with each district.

The survey didn’t cost Janesville anything because the Donovan Group has a contract with the Wisconsin Association of School District Administrators, of which the district is a member.

Parents made up the majority of survey respondents—72% of those surveyed said they have children who will attend public school in fall. Of those parents, around 80% said they would be comfortable having their children attend school in person.

About 36% of respondents preferred a hybrid education model in which groups of students would go to school at different times or on different days. A virtual—or online—education model was favored by just under 10%.

Superintendent Steve Pophal said the survey will be an effective tool for the district. He wasn’t surprised that a majority of those surveyed want students back in school.

“I think the numbers were predictable, and I think people recognize that kids learn best at school,” he said. “That’s why we have kids at school most of the time in a normal year.”

The data was shared with school board members, who will use it to decide which method to implement for fall. The board is set to make that decision at its Tuesday, July 14, meeting.

In an email, school board President Steve Huth said he was impressed by how many people took the survey, which offers valuable information for the board.

“We as an educational community are doing the best we can to provide the safest learning environment possible for every person who is part of our school system,” Huth wrote. “I am hopeful our parents and community leaders will encourage every person who may have an impact on the opening of school to support the guidelines in place at any given time. I am extremely confident in our leadership team and their ability to work with our board and families as we prepare to welcome students back this fall.”

The Gazette also reached out to board Vice President Jim Millard, who declined to comment.

The survey also asked people about safety measures that would make them more comfortable with in-person learning.

More than 85% of respondents said they wanted frequent cleaning of classrooms and school supplies, as well as hand sanitizer supplied to students.

The biggest concerns included public health guidance not being followed properly, classrooms not being disinfected properly, and schools not having enough sanitizing supplies and personal protective equipment.

About 82% of those surveyed said they would be comfortable with activities such as sports, clubs and music groups taking place this fall with precautions.

Pophal pointed to child care issues and parents returning to workplaces as possible reasons that parents wanted their children in school.

“Especially with our younger children, when you blend in the important issue of day care and the fact that parents have to go to work and then not have to worry about child care every day, I think that combination made this outcome predictable,” he said.

Despite the unsurprising survey results, it was important to get parent feedback, he said.

Pophal said district officials will continue to gather information from local, state and federal sources, as well as other school districts, as they determine what education will look like this fall.

This story was changed July 8, 2020, to clarify the percentage of parents comfortable with their children returning to classrooms.

The state Department of Health Services issued a citation to St. Elizabeth Nursing Home after an investigation into a COVID-19 outbreak at the facility.

The state Department of Health Services has determined St. Elizabeth Nursing Home had an inadequate screening protocol after an investigation into a COVID-19 outbreak at the facility, but the nursing home disputes that.

A state report released Tuesday states St. Elizabeth failed to ensure all staff members were screened for COVID-19 symptoms at the beginning of their shifts to prevent exposure to residents.

"Due to the presence of many asymptomatic persons in the community, it is very difficult to pinpoint how the infection was transmitted," public information officer Kelsey Cordova said in an email to The Gazette.

The nursing home says its submission of a plan of correction is not a “legal admission” to the findings in the state’s report.

The Gazette was unable to reach health department spokeswoman Kelsey Cordova on Tuesday to ask whether more residents or staff members have tested positive since then.

One resident has been hospitalized and the other is receiving care in an isolation unit at St. Elizabeth's, according to the release.

In May, state health officials said a single case of COVID-19 prompts the state to open a facility-wide investigation.

State investigators found St. Elizabeth was not ensuring staff members were abiding by its infection control policy for COVID-19 and that the policy itself was unclear, according to the report.

A St. Elizabeth policy dated April 21 dictates that all employees should be screened at the beginning of their shifts for fever and other COVID-19 symptoms, according to the report.

During interviews with state officials, the nursing home’s interim director of nursing and the assistant nursing home administrator said each staff member was supposed to complete an online screening via Survey Monkey, a website for creating surveys and polls, and have his or her temperature taken by a nurse at the door before each shift.

Those interviewed were identified by title. No names were given.

Staff members had access to the survey website at onsite computers and on their phones starting March 11, according to the report.

All staff members had the potential to be in contact with any or all of the nursing home’s 23 residents, the assistant administrator said in the report.

State investigators found the nursing home’s screening policy did not specifically outline the Survey Monkey process, who was supposed to take temperatures, when screenings were completed or how to document the screenings, according to the report.

After a review of COVID-19 screening logs, investigators found no documentation of screening entries or temperatures on the log for:

The assistant nursing home administrator and a previous director of nursing had been monitoring screening data, and the screenings should have been completed but were not, the administrator said.

Failure to clearly define the screening policy and ensure compliance daily could expose residents to COVID-19 infection, according to the report.

In its plan for correction, St. Elizabeth said no residents suffered because of the incidents in the report.

The nursing home is now auditing the screening logs and ensuring temperatures are taken by staff upon entry.

All staff members are given masks before entering the facility, and education and training are provided on the screening process, according to the plan of correction.

An online database unveiled Wednesday shows six long-term care facilities (five of which are nursing homes), three non-healthcare workplaces and one health care facility are being investigated by the state for COVID-19 related issues in Rock County.

Six Rock County nursing homes have been investigated by the state for COVID-19 outbreaks, according to a state database.

Rock Haven, which reported its first COVID-19 case May 14, is the only nursing home with an active investigation as of Tuesday.

County Administrator Josh Smith said Tuesday that a contracted agency nurse was one of three Rock Haven employees who have tested positive for the novel coronavirus.

The Oak Park Place investigation yielded no violations or evidence of wrongdoing, according to a state report.

Reports for the other facilities have not yet been made public. 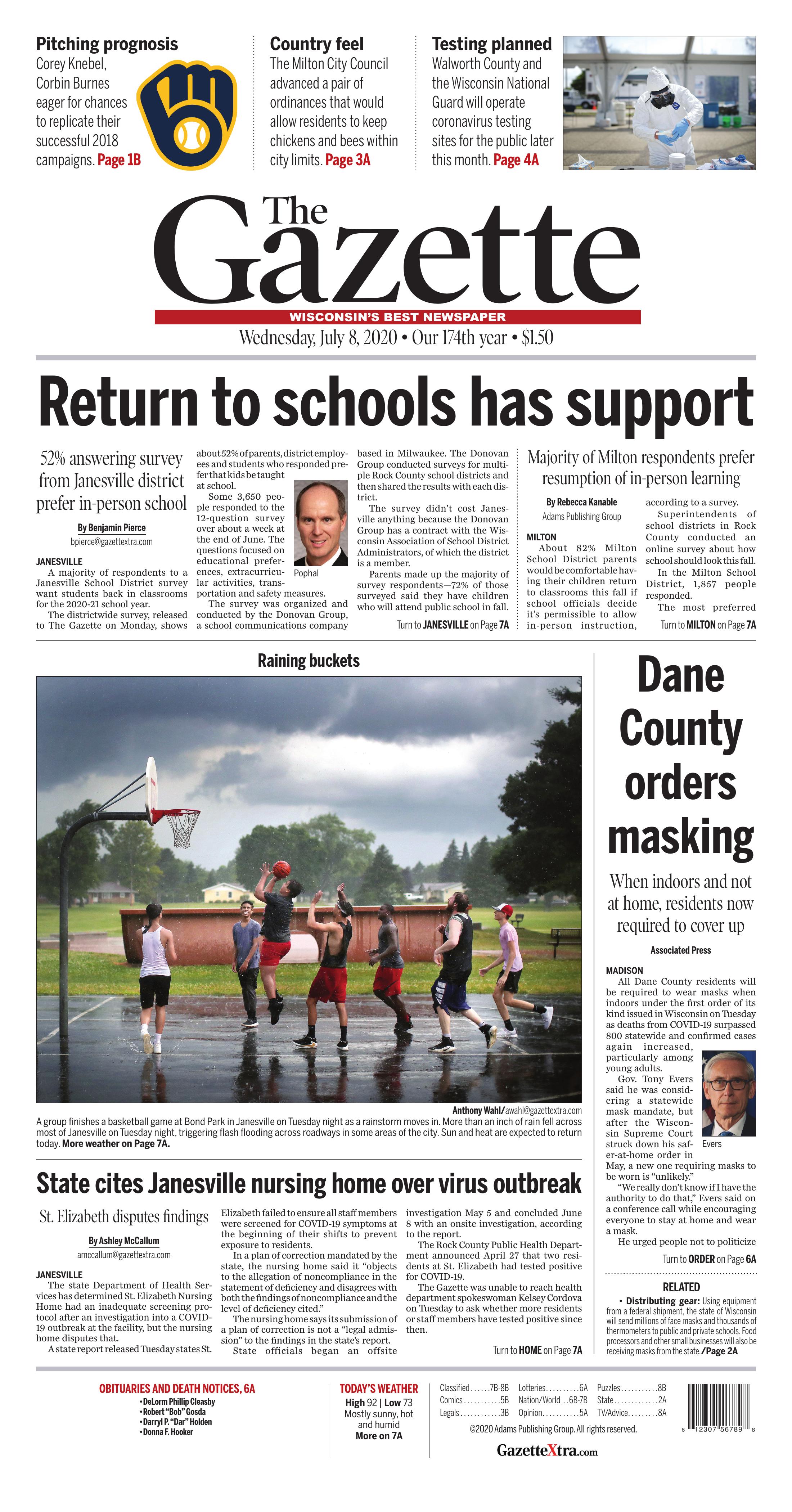