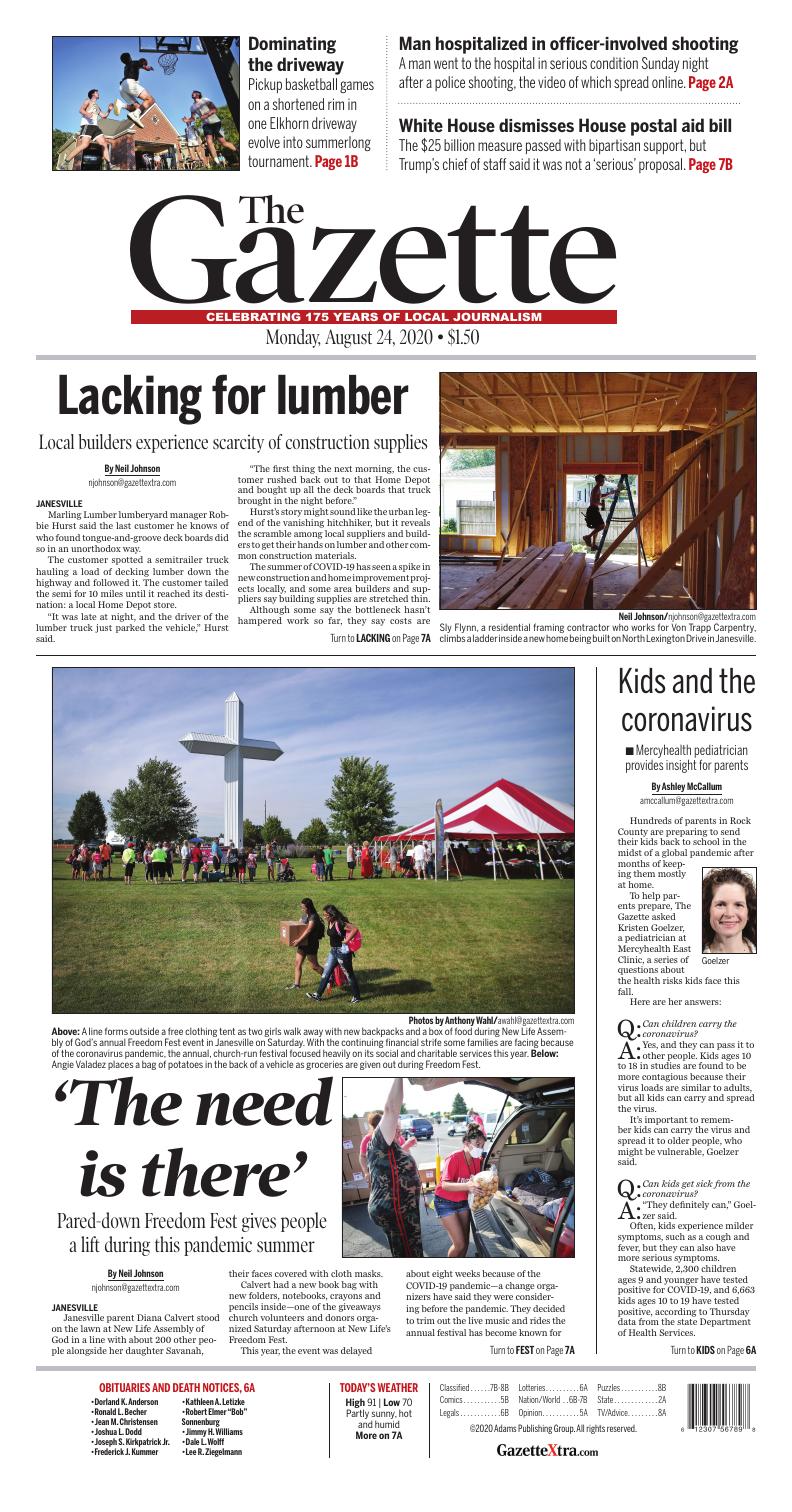 Sly Flynn, a residential framing contractor who works for Von Trapp Carpentry, climbs a ladder inside a new home being built on North Lexington Drive in Janesville. Local contractors and lumber suppliers say COVID-19 has led to a slim supply of some building materials at a time when demand for home improvements and new housing starts is on the rise.

Marling Lumber lumberyard manager Robbie Hurst said the last customer he knows of who found tongue-and-groove deck boards did so in an unorthodox way.

The customer spotted a semitrailer truck hauling a load of decking lumber down the highway and followed it. The customer tailed the semi for 10 miles until it reached its destination: a local Home Depot store.

“It was late at night, and the driver of the lumber truck just parked the vehicle,” Hurst said.

“The first thing the next morning, the customer rushed back out to that Home Depot and bought up all the deck boards that truck brought in the night before.”

Hurst’s story might sound like the urban legend of the vanishing hitchhiker, but it reveals the scramble among local suppliers and builders to get their hands on lumber and other common construction materials.

The summer of COVID-19 has seen a spike in new construction and home improvement projects locally, and some area builders and suppliers say building supplies are stretched thin.

Although some say the bottleneck hasn’t hampered work so far, they say costs are inflated, and that trend could have a ripple effect later this year or next.

One culprit is the glut of home-improvement projects that came this spring and summer as residents hunkered at home during pandemic lockdowns.

However, the bottleneck hasn’t eased much in recent weeks, and lumberyards such as family-owned Nelson Young Lumber Co. in Edgerton blame COVID-19’s impact on the manufacturing sector.

Tracy Tronnes, a manager for Nelson-Young, said prices have “doubled” this summer for materials such as framing lumber and roofing sheeting, partly because of increased demand. But the supply hasn’t improved, which she said is probably because manufacturing is still sputtering back toward pre-COVID-19 levels.

“The supply chain is highly compromised because in some states, manufacturing was shut down during COVID closures,” Tronnes said. “Some items have extended lead times. Others are just not being produced, or production is so limited that many yards aren’t able to get the product.”

She said the hardest-hit products are treated lumber and decking material, which are used in outdoor structures and framing for new construction.

Building materials, and their availability and cost, tend to be a bellwether of the greater economy.

“Usually, on the lumber side, if mills have this much business and the prices are at a level that is very profitable, they increase production,” Tronnes said. “This time around, the mills can’t seem to get enough workers to increase their output. It’s mainly due to (earlier) unemployment benefits, and obviously, COVID concerns.”

Prior to the pandemic, the local housing market was tight on existing homes and ravenous for new homes.

City of Janesville records show local builders filed for dozens of permits last fall and this spring to launch housing starts, and state Department of Revenue property transfer data shows a spate of sales of residential lots on contract, both indicators that housing starts continue to find a market here.

Existing home sales held steady this summer in Rock County, and in fact, prices jumped to an average of $219,000 in July, according to the South Central Wisconsin Multiple Listing Service. That’s an 11% increase over prices in June 2019.

National analysts say despite a recession and lingering high unemployment, the demand for existing and new homes is likely to remain steady, particularly in affordable markets such as Rock County’s.

Some analysts believe that’s because home ownership is becoming more attractive to people whose transition to work-from-home during the pandemic has become a more permanent arrangement.

Tronnes believes an increase in material costs will lead to consumers paying more for new homes, at least in the short term.

“But demand is up, and interest rates are still attractive, which helps keep things going,” she said.

Janesville builder John Von Trapp said his company, Von Trapp Carpentry, hasn’t been slowed by the down economy or the bottleneck in materials—at least not yet.

He said many builders had stocked up on materials for projects that were planned before the pandemic.

But he admitted it has been tricky to find some specialty items locally.

Windows, cabinetry and even stain and paint can be on a two-month wait, he and Tronnes said.

At one project in Janesville’s Courthouse Hill district, a customer of Von Trapp’s wants a large addition: a two-story attached garage with living quarters upstairs.

That plan required an oversized steel beam between the addition’s first and second floors. Such items aren’t in stock locally; Von Trapp had to get the beam trucked in from Pennsylvania.

The last time Von Trapp says he felt a similar crunch on building materials was 2002, during the lull that followed the 9/11 terrorist attacks, and in 2008, when the economy cratered during the Great Recession.

Unlike those periods, he said, this summer has been busy for contractors.

However, Von Trapp has heard local hardware store managers bemoaning a short supply of items he has never seen dwindle. Sandpaper, for instance.

“So that’s three businesses affected at once. And that’s just one product. Sandpaper. So you can see how it might take a while for all of that to start to catch up.” 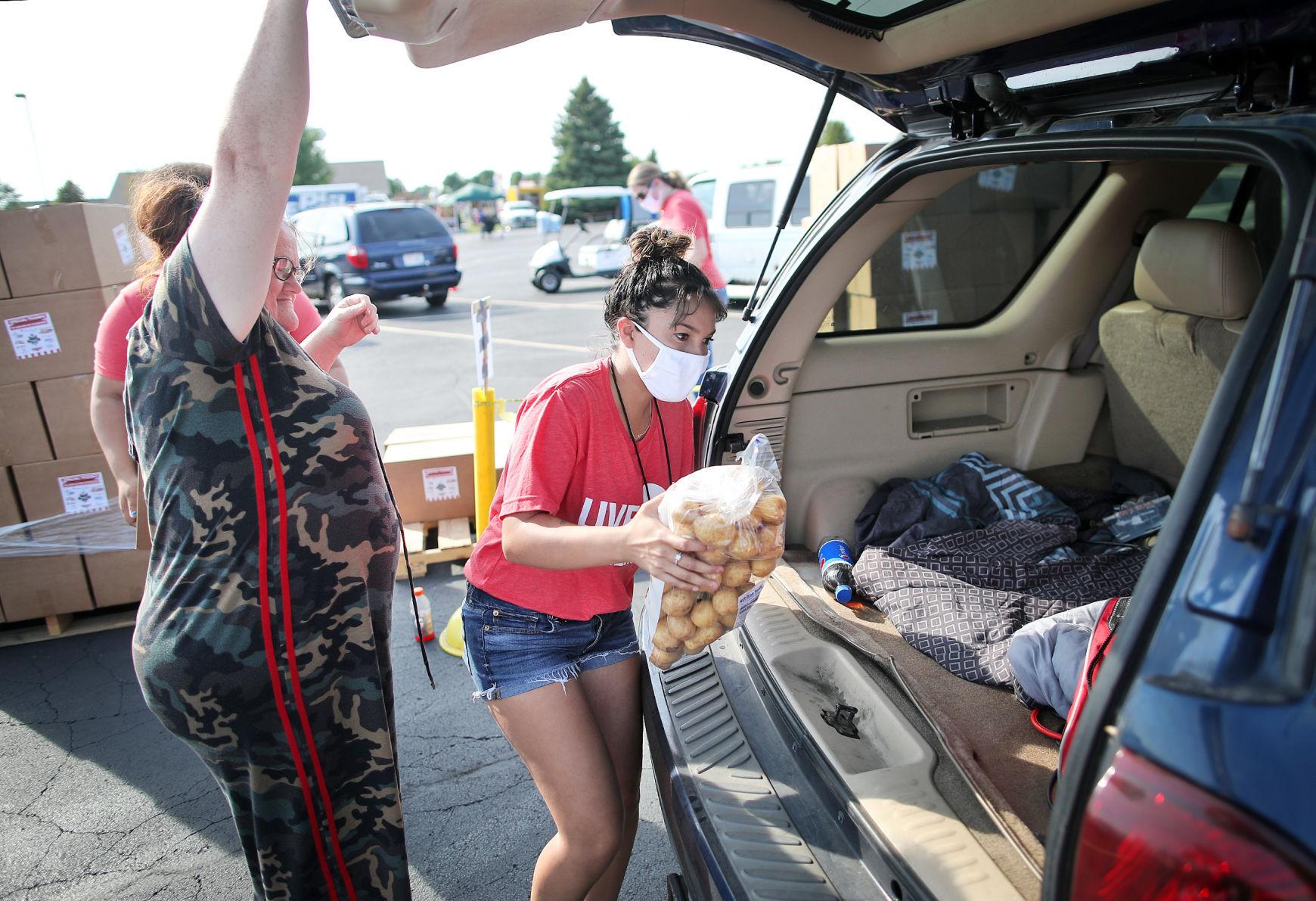 Angie Valadez places a bag of potatoes in the back of a vehicle as groceries are given out to those in need during New Life Assembly of God’s annual Freedom Fest event in Janesville on Saturday. 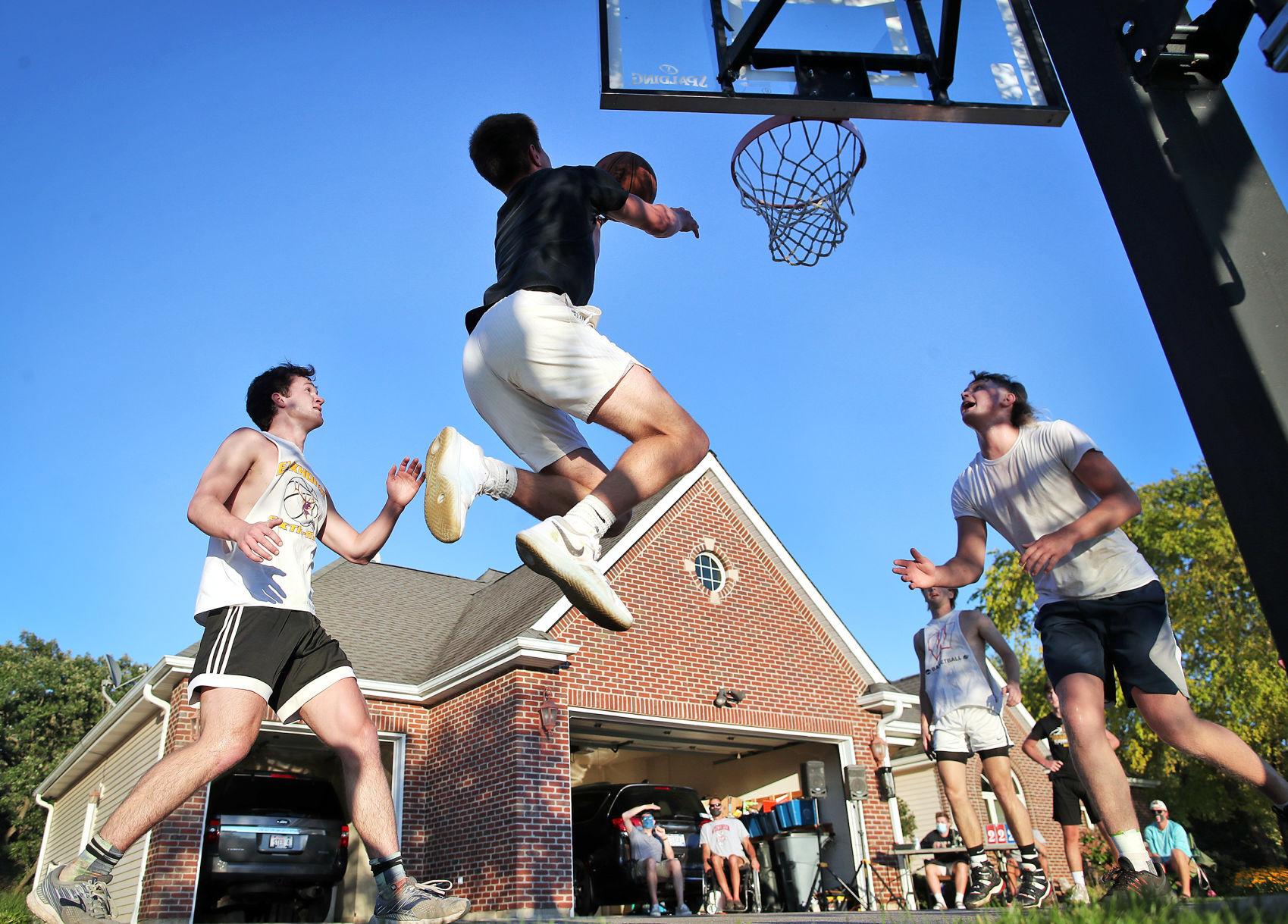 Colton Loomis takes off from the baseline to score on a layup during the championship game in the Elkhorn Mini Hoop League on Tuesday, Aug. 18.

Local
top story
What to know about COVID-19 and kids before school starts
By Ashley McCallum amccallum@gazettextra.com

Kayvon Shaw-Davis, 10, and his sister, Luna, walk on the sidewalk after their first day of school in 2019 at Washington Elementary School in Janesville.

Hundreds of parents in Rock County are preparing to send their kids back to school in the midst of a global pandemic after months of keeping them mostly at home.

To help parents prepare, The Gazette asked Kristen Goelzer, a pediatrician at Mercyhealth East Clinic, a series of questions about the health risks kids face this fall.

Here are her answers:

Q: Can children carry the coronavirus?

A: Yes, and they can pass it to other people. Kids ages 10 to 18 in studies are found to be more contagious because their virus loads are similar to adults, but all kids can carry and spread the virus.

It’s important to remember kids can carry the virus and spread it to older people, who might be vulnerable, Goelzer said.

Q: Can kids get sick from the coronavirus?

A: “They definitely can,” Goelzer said.

Often, kids experience milder symptoms, such as a cough and fever, but they can also have more serious symptoms.

Q: Is it possible for a child to become severely ill or have to be hospitalized with COVID-19?

A: Yes. Some children who get the virus develop multisystem inflammatory syndrome, a condition in which the heart, blood vessels, kidneys, digestive system, brain, skin or eyes become inflamed, causing swelling, redness and pain.

Q: What might put a child at higher risk of getting seriously ill?

A: Kids who are most at risk have medical issues such as congenital heart disease, neurological problems, obesity and diabetes.

Q: Are there possible long-term health effects for children who get the virus?

A: Some studies show long-term effects, including an increased risk of Type 1 diabetes, Goelzer said.

There are also concerns about long-term neurological symptoms, such as fatigue.

Q: Will wearing masks at school prevent kids from engaging in physical activity?

A: Kids will be fine to run around or play while wearing masks, Goelzer said. There is no evidence to show people don’t get enough oxygen while wearing a mask, she said.

Q: How do you talk to kids about the pandemic?

A: Goelzer said she tries to make sure kids are not too worried by being honest and letting them know that children can get sick but face lower risks.

Kids adapt fairly well, she said. Before sending children to school, she said families should start getting them used to frequent hand-washing, mask-wearing, social distancing and covering their mouths and noses when they sneeze or cough. 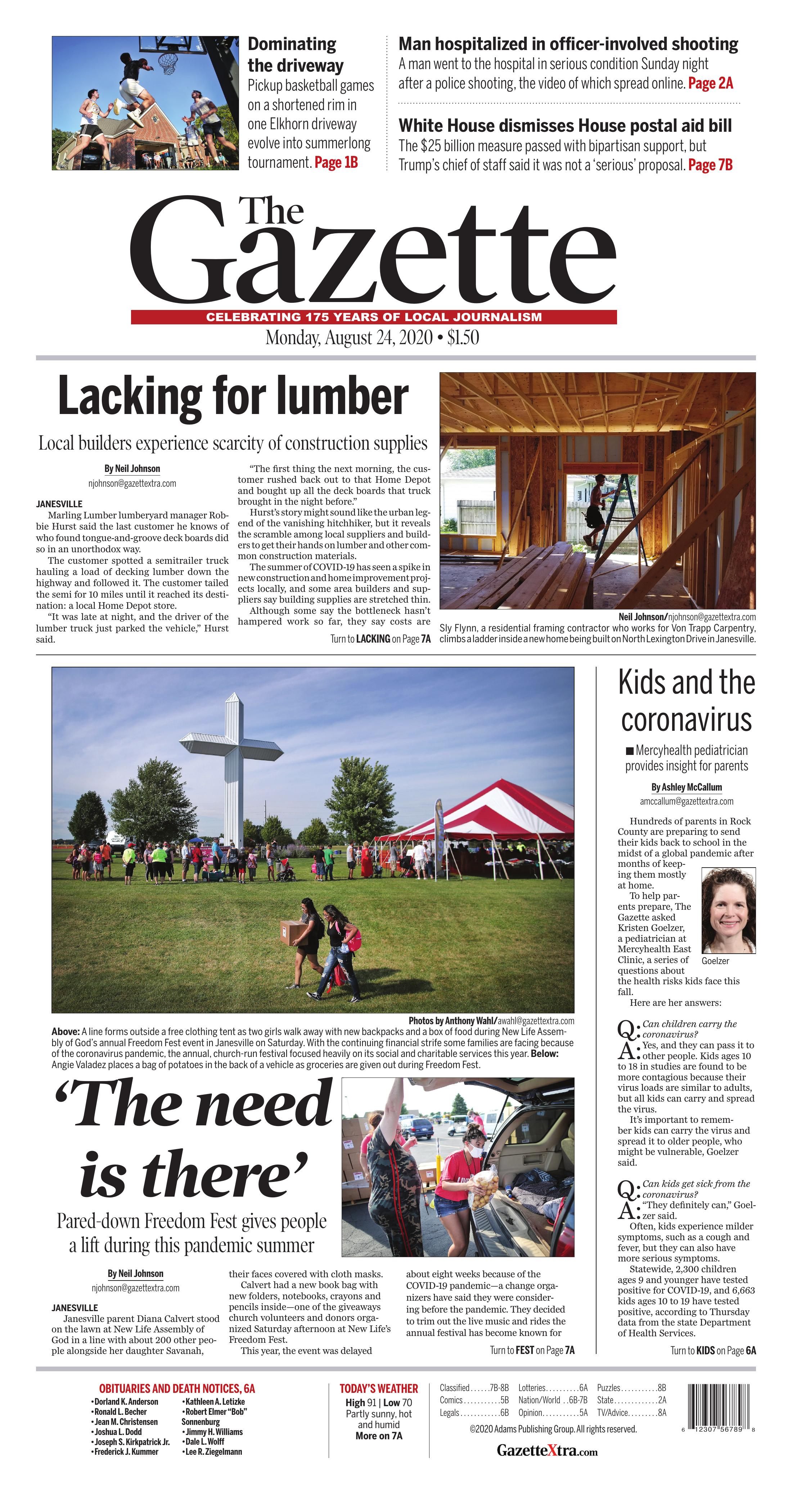