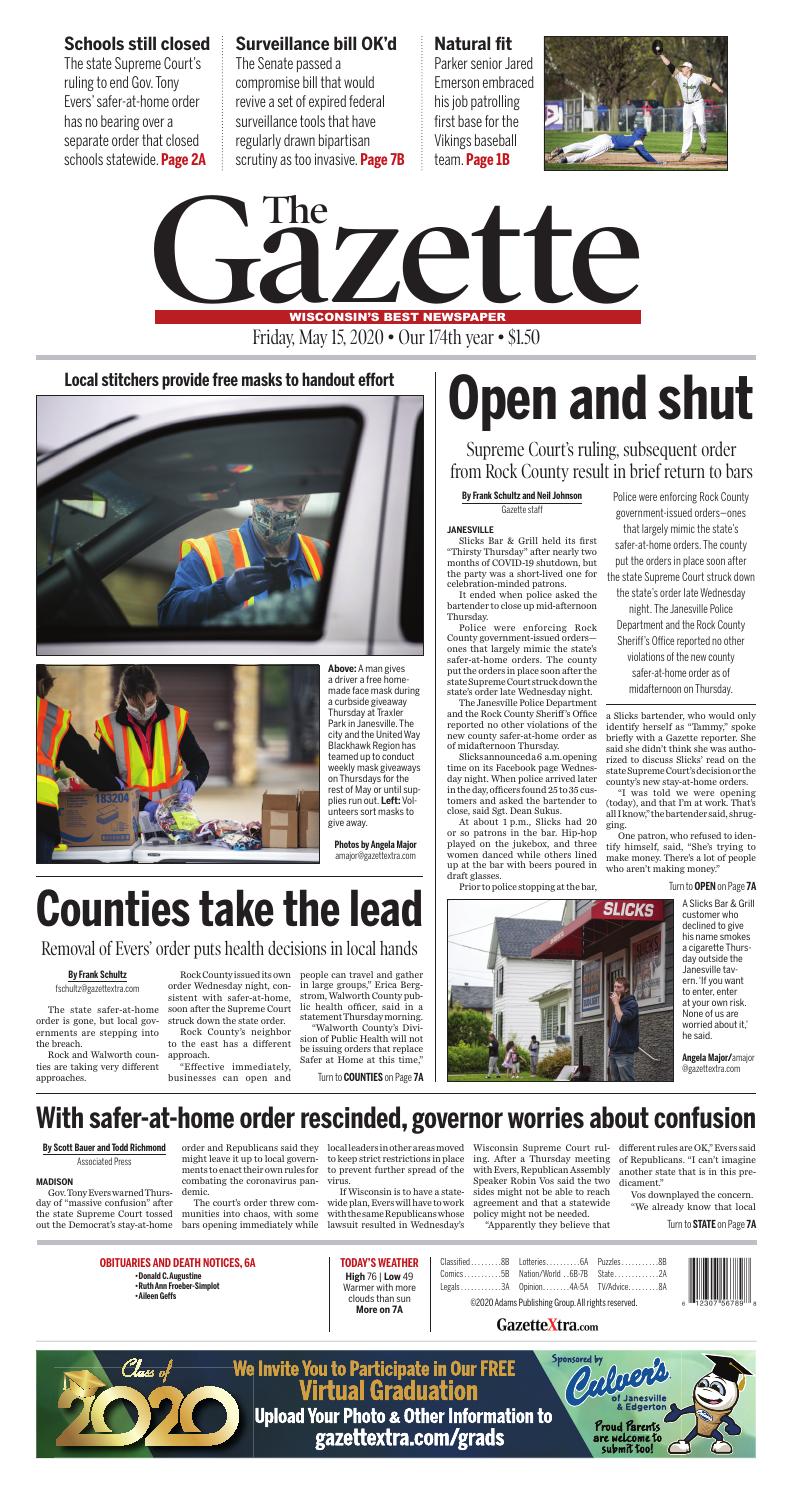 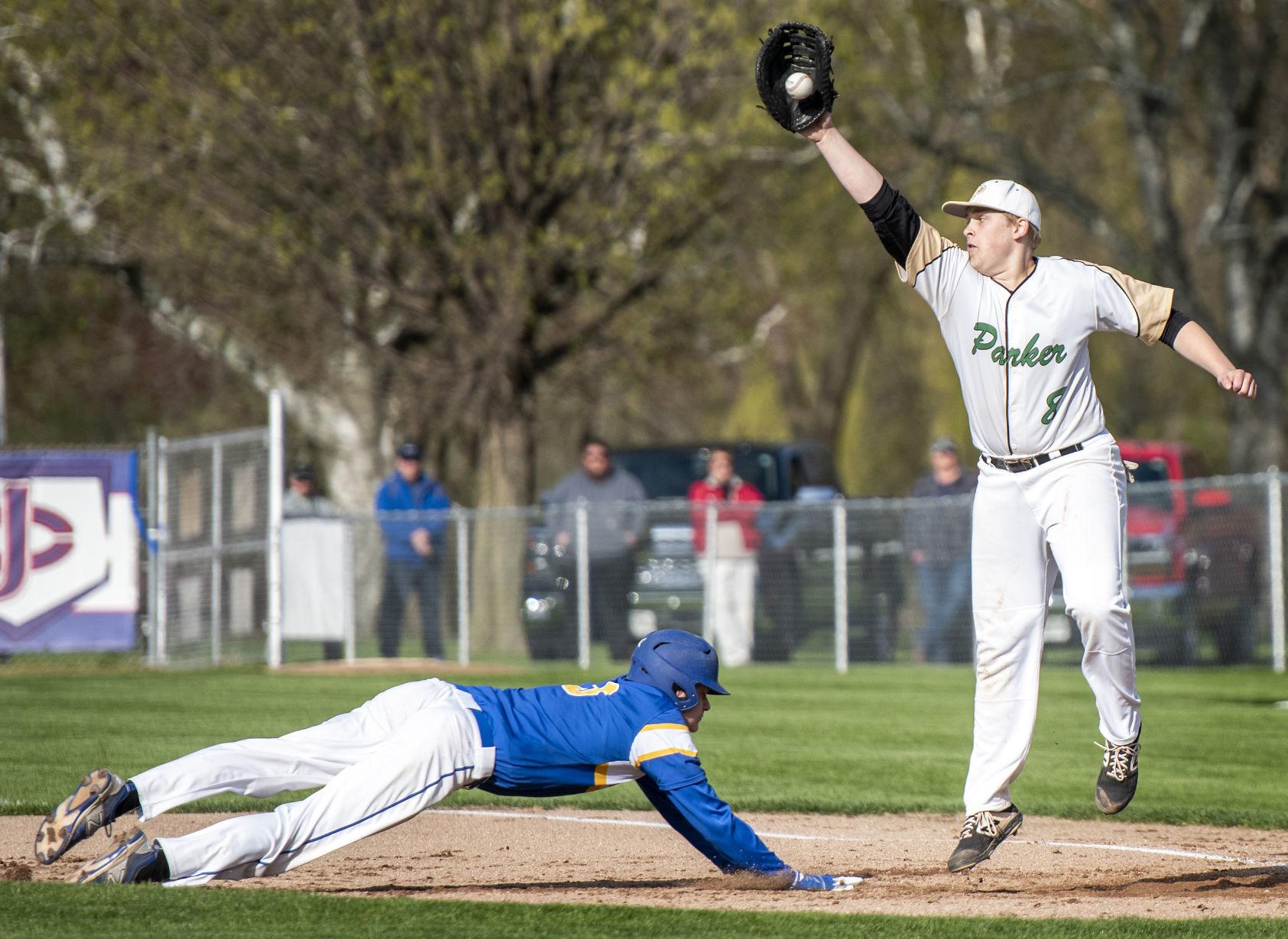 Parker’s Jared Emerson (8), right, catches a pickoff throw as a Madison West player dives back to first Tuesday, May 7, 2019, at Riverside Park in Janesville.

The state safer-at-home order is gone, but local governments are stepping into the breach.

Rock County issued its own order Wednesday night, consistent with safer-at-home, soon after the Supreme Court struck down the state order.

Rock County’s neighbor to the east has a different approach.

“Walworth County’s Division of Public Health will not be issuing orders that replace Safer at Home at this time,” Bergstrom said.

Walworth County issued guidance to businesses on its website for how they should protect their customers.

The Green County Health Department issued an order similar to Rock County’s, according to a Facebook message from police in Brodhead, which straddles the county line.

Rock County announced Thursday that violations of its order can result in fines of $30 for a first offense, $50 for a second and $200 for any subsequent offense.

Janesville police had one such report.

Rock County indicated it is working on setting up a task force to develop rules for reopening businesses and other organizations that will go into effect when the current order runs out May 26.

“In the next 10 days, we will engage community leaders from the public, private and nonprofit sectors to develop a unified, county-specific plan to reopen that is based on our local metrics,” Rock County administration said in a statement Thursday. “We need your patience and understanding as we develop and implement this plan to open up our community in a way that will keep county residents safe and get them back to work as quickly and safely as possible.”

Rock County remains one of the top counties in Wisconsin for the number of COVID-19 cases per capita, the statement reads.

The city of Janesville issued a statement Thursday afternoon that it will comply with the county’s order.

”We’ll enforce the county order in place as required,” Elizabeth Hough, public information officer for the city’s joint information center, told The Gazette earlier Thursday. “We ask for the community’s help in continuing to do their part to slow the spread.”

“We appreciate the leadership of Rock County Public Health in providing necessary precautions to stop the spread of COVID-19 in Beloit and beyond,” Luther said on the city Facebook page. “We are not past the public health crisis here in our own community. Please continue to maintain social distancing and stay home unless it is for essential items.”

Rock County is relying on a state statute, 252.03(2), that gives local health departments authority to do “what is reasonable and necessary for the prevention and suppression of disease,” County Administrator Josh Smith said in an email.

Smith also cirted state Statute 323.14(4)(a), which gives counties powers during emergencies “to order, by ordinance or resolution, whatever is necessary and expedient for the health, safety, protection, and welfare of persons and property within the local unit of government ...”

A Slicks Bar & Grill customer who declined to give his name smokes a cigarette Thursday outside of the Janesville establishment. 'If you want to enter, enter at your own risk. None of us are worried about it,' he said.

Slicks Bar & Grill held its first “Thirsty Thursday” after nearly two months of COVID-19 shutdown, but the party was a short-lived one for celebration-minded patrons.

It ended when police asked the bartender to close up mid-afternoon Thursday. 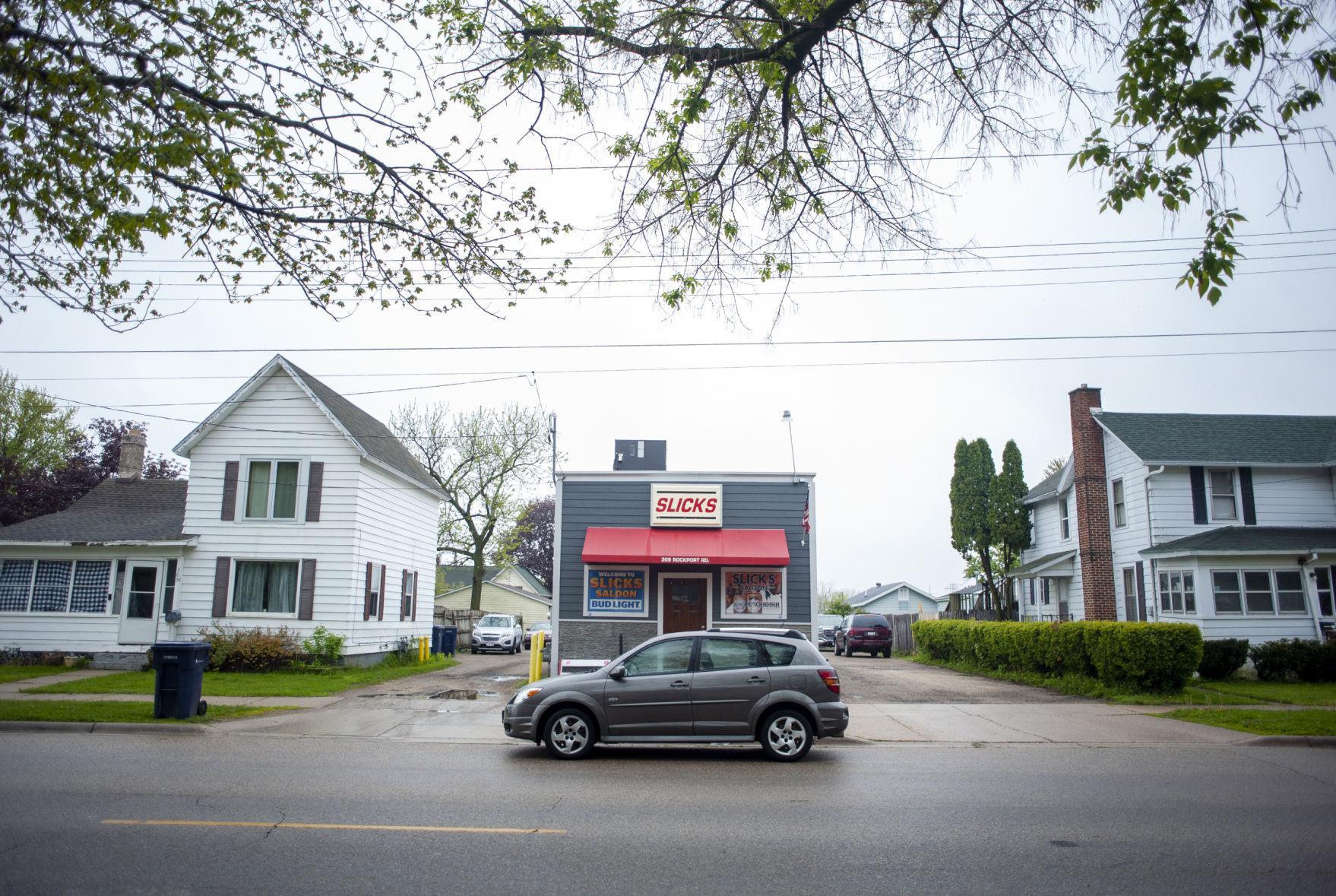 Slicks Bar & Grill was open for a portion of the day Thursday in Janesville.

The Janesville Police Department and the Rock County Sheriff’s Office reported no other violations of the new county safer-at-home order as of midafternoon Thursday.

Slicks announced a 6 a.m. opening time on its Facebook page Wednesday night. When police arrived later in the day, officers found 25 to 35 customers and asked the bartender to close, said Sgt. Dean Sukus.

At about 1 p.m., Slicks had 20 or so patrons in the bar. Hip-hop played on the jukebox, and three women danced while others lined up at the bar with beers poured in draft glasses.

Prior to police stopping at the bar, a Slicks bartender, who would only identify herself as “Tammy,” spoke briefly with a Gazette reporter. She said she didn’t think she was authorized to discuss Slicks’ read on the state Supreme Court’s decision or the county’s new stay-at-home orders.

“I was told we were opening (today), and that I’m at work. That’s all I know,” the bartender said, shrugging.

One patron, who refused to identify himself, said, “She’s trying to make money. There’s a lot of people who aren’t making money.”

The bartender shrugged, pouring out another drink to a patron.

Police said a bartender at Slicks later in the afternoon told officers she didn’t know about the county’s new order and agreed to close without further incident, Sukus said.

“Everybody seems to be understanding of the health department’s request, and we’re still treating this as a public education and information opportunity,” while hoping to avoid anything further, Sukus said.

The ALAC could move to revoke a bar’s license. 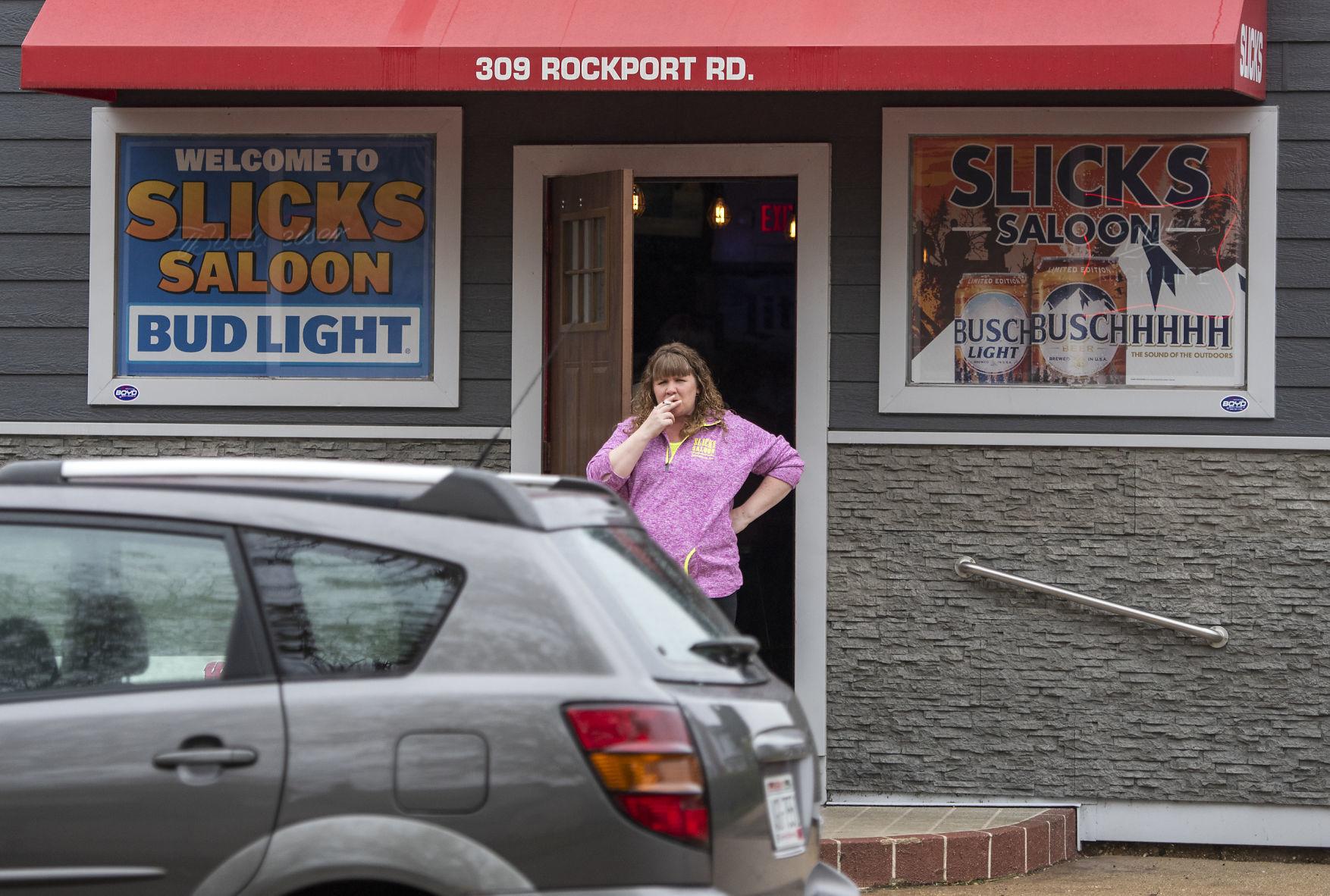 Like Janesville police, sheriff’s deputies will take the persuasion/education approach because it’s likely many people have not yet heard of the county action, Sheriff Troy Knudson said.

Matt Kealy, owner of Drafthouse, a new bar and restaurant on South Main Street in downtown, said a half-dozen patrons who had come to grab carryouts Wednesday night decided to stay at the bar for a few cocktails.

As of mid-evening Wednesday in the wake of Supreme Court ruling, Kealy already had seen the Wisconsin Tavern League’s reading on the ruling: bars had the clear to open “immediately.”

Customers had caught wind, too, and Kealy said he would allow patrons to stay and have drinks in the bar if they wanted to.

About two hours later, one of the patrons saw an alert on her phone that Rock County had mandated new, stay-at-home orders that appeared to supersede the high court’s decision, Kealy said.

Kealy said when he learned of the county’s new mandate, he promptly closed the Drafthouse for the night.

By Thursday afternoon, the Drafthouse was back to curbside and pickup orders only. Kealy said he plans to comply with the county’s stay-at-home orders, which was the recommendation he said the tavern league has made for bars operating in counties now under local stay-at-home orders.

After the court ruling Wednesday, Kealy said he had assumed the county would respond with new local restrictions. But he expected a metered approach to reopening bars, similar to Gov. Evers’s decision earlier in the week to allow retailers to reopen with limits to in-store crowds.

He hadn’t expected a continued lock down.

“We really didn’t think it would return to being a total no-go,” Kealy said.

Kealy opposes the county’s new mandate because he said it seems to provide less clarity than Gov. Evers’s initial safer-at-home orders, which had been set to sunset May 26.

Kealy said he had been laying groundwork for a reopening sometime in the next few weeks. That involves adjusting Drafthouse’s dining and bar setup to manage crowds as safely as possible.

Kealy said he and most other downtown bar operators he has spoken with don’t want to see their establishments draw “shoulder-to-shoulder” crowds anytime in the near future.

But he said some restaurant and bar operators now are running curbside operations mainly on cash reserves. And for some, especially small operators, that might not be sustainable.

Some, he said, might not be eligible for government bridge loans being offered to soften the blow of the COVID-19 shutdown of businesses. Others who are eligible for small loans might not want to take on more debt without clarity from local governments on when, or how, they might be able to operate in the future, Kealy said.

“We need to start to begin the process to reopen our businesses. And that’s what we’re asking to do.”

Gazette photographer Angela Major contributed to the reporting in this story. 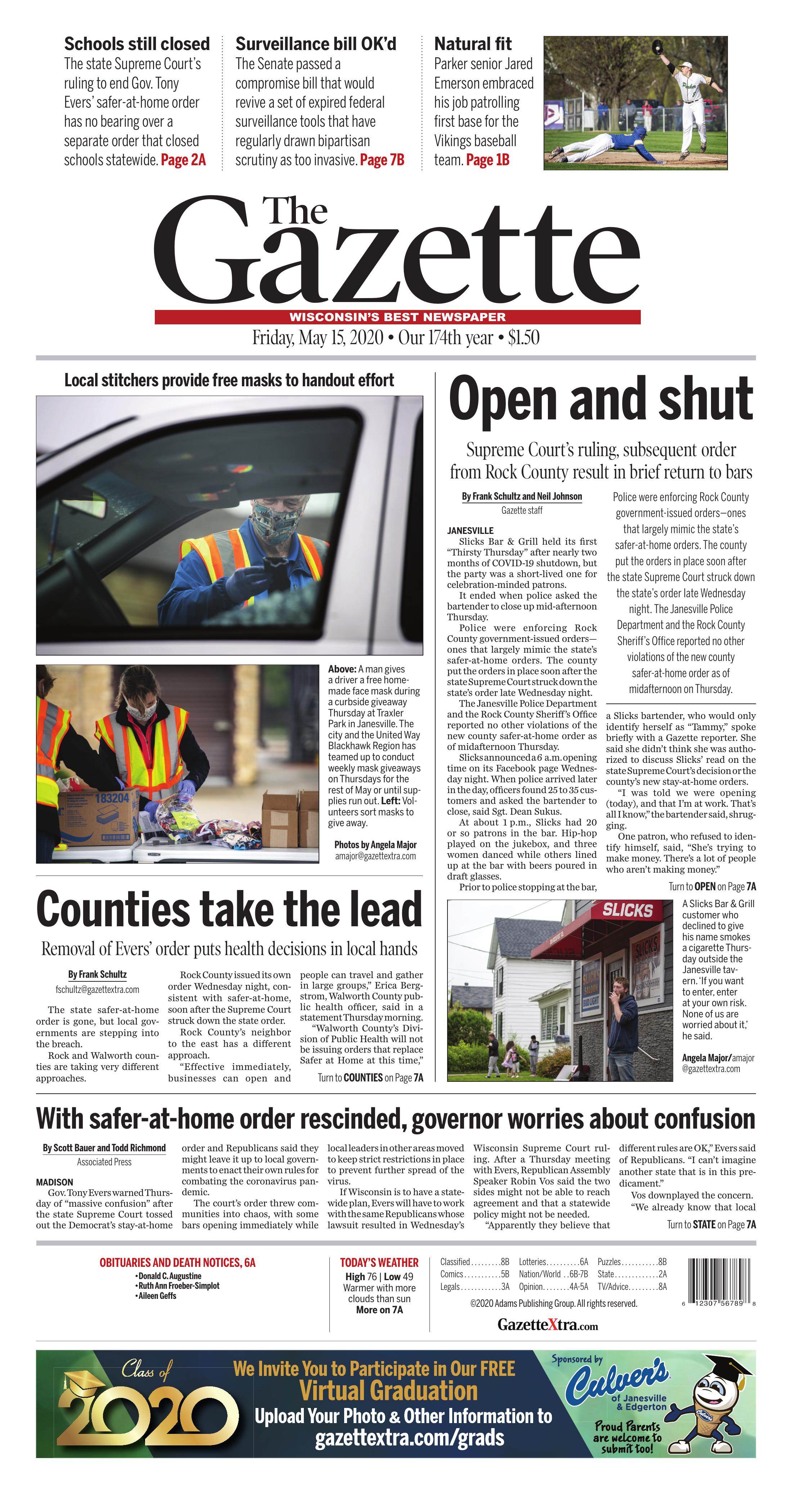