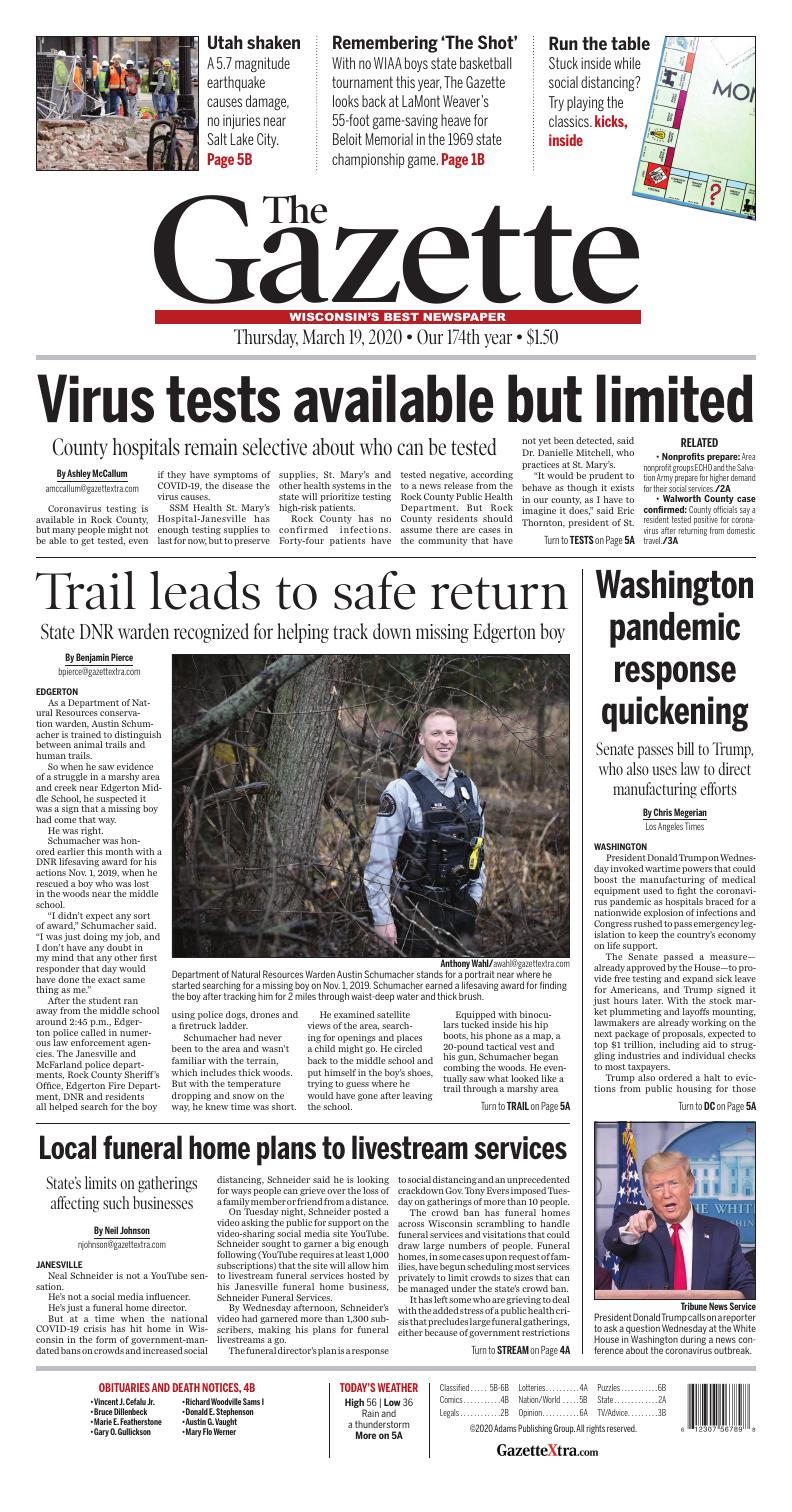 Coronavirus
Coronavirus tests available in Rock County but will be limited to high-risk patients
By Ashley McCallum amccallum@gazettextra.com

Coronavirus testing is available in Rock County, but many people might not be able to get tested, even if they have symptoms of COVID-19, the disease the virus causes.

SSM Health St. Mary’s Hospital-Janesville has enough testing supplies to last for now, but to preserve supplies, St. Mary’s and other health systems in the state will prioritize testing high-risk patients.

Rock County has no confirmed infections. Forty-four patients have tested negative, according to a news release from the Rock County Public Health Department. But Rock County residents should assume there are cases in the community that have not yet been detected, said Dr. Danielle Mitchell, who practices at St. Mary’s.

Walworth County now has a confirmed case of COVID-19, a person who recently traveled domestically and self-isolated upon return, according to a news release issued Wednesday.

“It would be prudent to behave as though it exists in our county, as I have to imagine it does,” said Eric Thornton, president of St. Mary’s.

People who show mild symptoms of COVID-19 and do not have underlying health issues will likely be told to quarantine for two weeks without being tested, Mitchell said.

People with mild symptoms are urged to call their health care providers or a medical professional to get more information. Those with symptoms should not show up to any health care facility without calling first, Mitchell said.

Symptoms of COVID-19 include fever, cough and trouble breathing.

St. Mary’s on Friday plans to open a trailer on site to be its coronavirus evaluation location, Mitchell said.

Mercyhealth this week began drive-thru testing in Janesville for patients referred for testing by a physician.

“Again, I must reiterate, if you are not having an emergency situation, please do not come directly to the emergency room, urgent care or facility to get tested,” Mercyhealth Medical Director Mark Goelzer said in an email statement to The Gazette. “Presenting to a location for sake of getting tested for COVID-19 could result in you getting sent home without being tested.”

Local businesses brace for possibility of shutdown amid COVID-19

Local business leaders said in a Tuesday conference call they're working to set up work-from-home plans in the event the COVID-19 crisis prompts a shutdown of workplaces.

State officials this week said the state hygiene lab can complete tests on 400 specimens per day, which is not on pace with demand.

A nationwide shortage of testing supplies, including testing reagents, is posing a threat to testing capacity across the country, said Kelsey Cordova, a community health education coordinator at the county health department.

The department is working with providers to address what is needed and sends that information on to state officials, she said.

Self-isolation is one of the best ways to reduce spread of the virus and ease the demand for materials, Mitchell said.

Mercyhealth System and SSM Health urge people presenting symptoms of respiratory illness to reach out to medical professionals for help.

People who believe they have symptoms of COVID-19 are asked to call the health care facility before visiting so staff can take precautions.

Department of Natural Resources Warden Austin Schumacher stands for a portrait near where he started searching for a missing boy on Nov. 1, 2019. Schumacher earned a lifesaving award for finding the boy after tracking him for two miles through waist-deep water and thick brush.

As a Department of Natural Resources conservation warden, Austin Schumacher is trained to distinguish between animal trails and human trails.

So when he saw evidence of a struggle in a marshy area and creek near Edgerton Middle School, he suspected it was a sign that a missing boy had come that way.

Schumacher was honored earlier this month with a DNR lifesaving award for his actions Nov. 1, 2019, when he rescued a boy who was lost in the woods near the middle school.

“I didn’t expect any sort of award,” Schumacher said. “I was just doing my job, and I don’t have any doubt in my mind that any other first responder that day would have done the exact same thing as me.”

After the student ran away from the middle school around 2:45 p.m., Edgerton police called in numerous law enforcement agencies. The Janesville and McFarland police departments, Rock County Sheriff’s Office, Edgerton Fire Department, DNR and residents all helped search for the boy using police dogs, drones and a firetruck ladder.

Schumacher had never been to the area and wasn’t familiar with the terrain, which includes thick woods. But with the temperature dropping and snow on the way, he knew time was short. 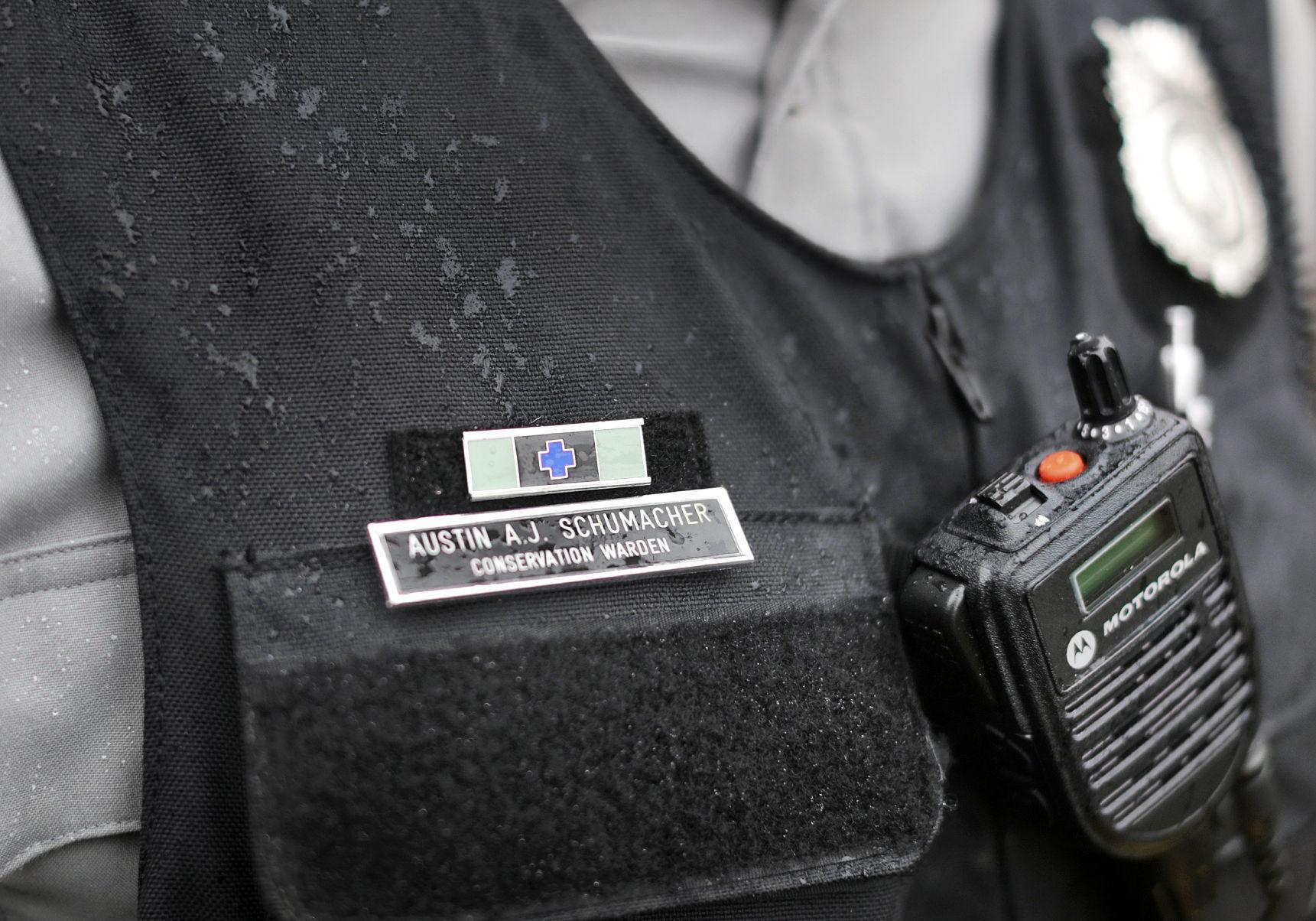 Austin Schumacher, a Department of Natural Resources conservation warden, recently was honored by the DNR for saving the life of a boy who had run away from Edgerton Middle School and gotten lost in the woods.

He examined satellite views of the area, searching for openings and places a child might go. He circled back to the middle school and put himself in the boy’s shoes, trying to guess where he would have gone after leaving the school.

Equipped with binoculars tucked inside his hip boots, his phone as a map, a 20-pound tactical vest and his gun, Schumacher began combing the woods. He eventually saw what looked like a trail through a marshy area and on the banks of a nearby creek.

“I started following it,” he said. “At first I wasn’t sure if it was him, but it was the best thing we had.”

Schumacher lost the trail several times and had to turn back and retrace his steps. At certain points, he found himself waist deep in creek water or crawling under heavy brush in the mud.

“It was definitely frustrating,” he said. “It was not the best conditions to be following a track because it would transition to a waist-deep creek, to a bank, to areas with no snow. You could tell, based on the track, the child was confused and disoriented because it (the track) zigzagged.”

While following the trail, he found the boy’s wet shoes and socks. After that, he tracked footprints in the mud.

After two miles of tracking, Schumacher found the boy. He was curled into a fetal position and tucked in a tree line on the edge of a field. The boy was soaking wet from swimming across the creek, shivering and unable to walk.

His feet were bleeding from walking barefoot.

Schumacher draped the boy over his back and told the boy to lock his arms and feet around him. He carried the boy more than a mile through the woods to a nearby road.

“Several times, I fell to one knee to catch my breath and keep going,” Schumacher said. “… It was extremely exhausting. The motivation when I finally found him to get him back home to his family kept me going, but it was definitely exhausting.”

He delivered the boy to his family a little more than two hours after he went missing.

When he received the call, Schumacher said he had no idea how events would unfold.

“When the call came out, I knew it was cold out and getting dark,” he said. “I figured there was only a few hours left, and when I heard he had already been missing for about an hour, it raised the stakes even more. I called out and asked if they needed help.

“Putting myself in that family’s shoes, having someone missing in those circumstances, it’s awful. I was willing to do whatever I could do to get that child back safe.”

“I thought it was incredible,” Kowalski said. “His training definitely was an asset to us on that day. Because he’s with the DNR, he had some equipment that most street cops may not have.”

“I think it was great that they recognized him for his actions. It was a great partnership with all the law enforcement agencies working that day,” he said.

Schumacher believes it was never about him. He’s just happy to have been in the right place at the right time.

“The biggest thing is I’m not a hero or anything sort of like that,” he said. “I have full confidence that any first responder that day would have done the same thing as me, and I’m just glad for the training that I had, that the stars were aligned that day, and I was able to find that child and he was safe.”

He’s not a social media influencer.

But at a time when the national COVID-19 crisis has hit home in Wisconsin in the form of government-mandated bans on crowds and increased social distancing, Schneider said he is looking for ways people can grieve over the loss of a family member or friend from a distance.

On Tuesday night, Schneider posted a video asking the public for support on the video-sharing social media site YouTube. Schneider sought to garner a big enough following (YouTube requires at least 1,000 subscriptions) that the site will allow him to livestream funeral services hosted by his Janesville funeral home business, Schneider Funeral Services.

By Wednesday afternoon, Schneider’s video had garnered more than 1,300 subscribers, making his plans for funeral livestreams a go.

The funeral director’s plan is a response to social distancing and an unprecedented crackdown Gov. Tony Evers imposed Tuesday on gatherings of more than 10 people.

The crowd ban has funeral homes across Wisconsin scrambling to handle funeral services and visitations that could draw large numbers of people. Funeral homes, in some cases upon request of families, have begun scheduling most services privately to limit crowds to sizes that can be managed under the state’s crowd ban.

It has left some who are grieving to deal with the added stress of a public health crisis that precludes large funeral gatherings, either because of government restrictions or their own health concerns.

“I completely agree with keeping our loved ones who could be affected protected. We’re doing our absolute best to keep those loved ones safe,” Schneider said.

Some families, Schneider said, have deferred large-scale celebrations of life for a later date when COVID-19 crisis might have subsided.

Schneider, who has been involved in the funeral home business since he was a young adult, said the coronavirus crisis, among other isolating affects, is making it harder for people to deal with grief.

Even at private services where families are allowed under the state crowd ban to file in 10 at a time, visitations have become an almost surreal experience in crowd control.

“I haven’t slept much in the last couple of days because that’s been our No. 1 objective, being able to have families have an avenue on how to grieve. If we take the funeral out of the picture, that can be such a hard way. No one’s actually going to the proper steps or the process of grieving,” Schneider said.

As of Wednesday afternoon, it appeared all Schneider would need is a webcam and an internet connection to YouTube to manage either public or private live webcasts of funeral services.

Schneider had been prepared to videotape services and post them to his website, but he said for now he prefers to have livestream services as an option.

He said families planning two upcoming funerals have been waiting to learn if he would be able to offer livestreaming.

“This is about what we can offer the living. People can come pay respects whether they can be there in person or not at this difficult time,” Schneider said. “They can start moving forward with the grieving process.” 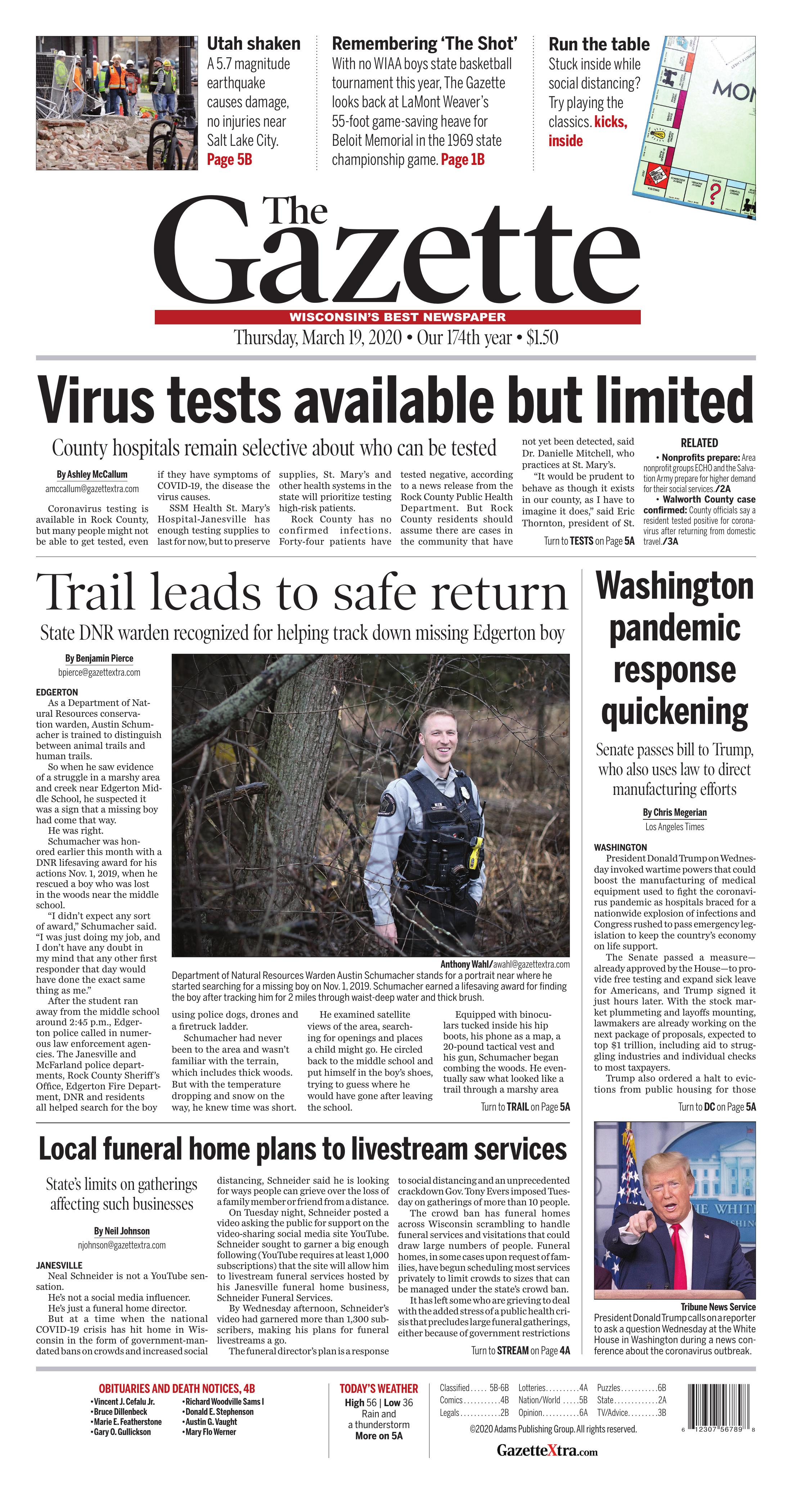