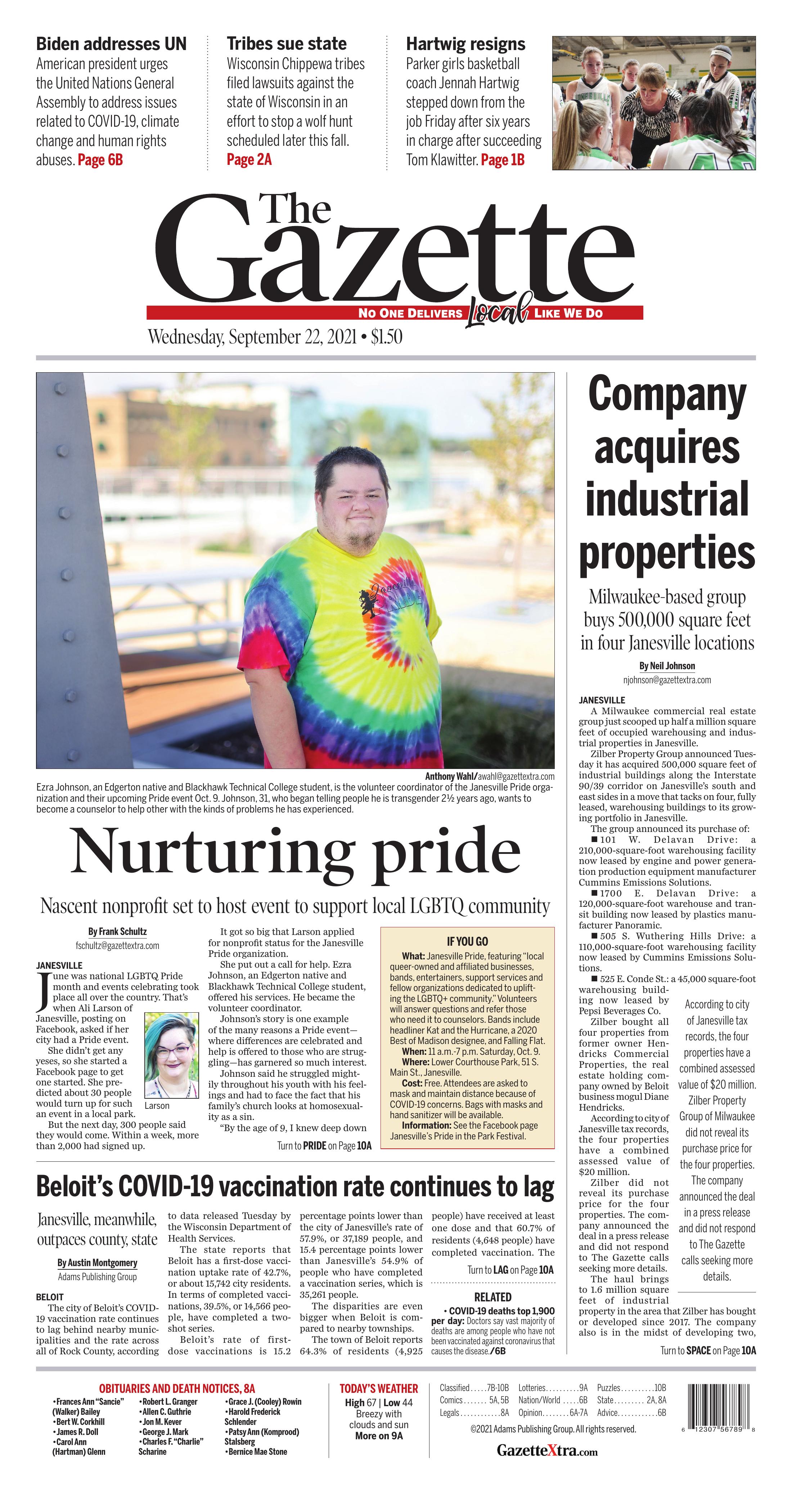 Ezra Johnson, an Edgerton native and Blackhawk Technical College student, is the the volunteer coordinator of the Janesville Pride organization and their upcoming Pride event on Oct. 9.

June was national LGBTQ Pride month and events celebrating took place all over the country. That’s when Ali Larson of Janesville, posting on Facebook, asked if her city had a Pride event.

She didn’t get any yeses, so she started a Facebook page to get one started. She predicted about 30 people would turn up for such an event in a local park.

It got so big that Larson applied for nonprofit status for the Janesville Pride organization.

She put out a call for help. Ezra Johnson, an Edgerton native and Blackhawk Technical College student, offered his services. He became the volunteer coordinator.

Johnson’s story is one example of the many reasons a Pride event—where differences are celebrated and help is offered to those who are struggling—has garnered so much interest.

Johnson said he struggled mightily throughout his youth with his feelings and had to face the fact that his family’s church looks at homosexuality as a sin. 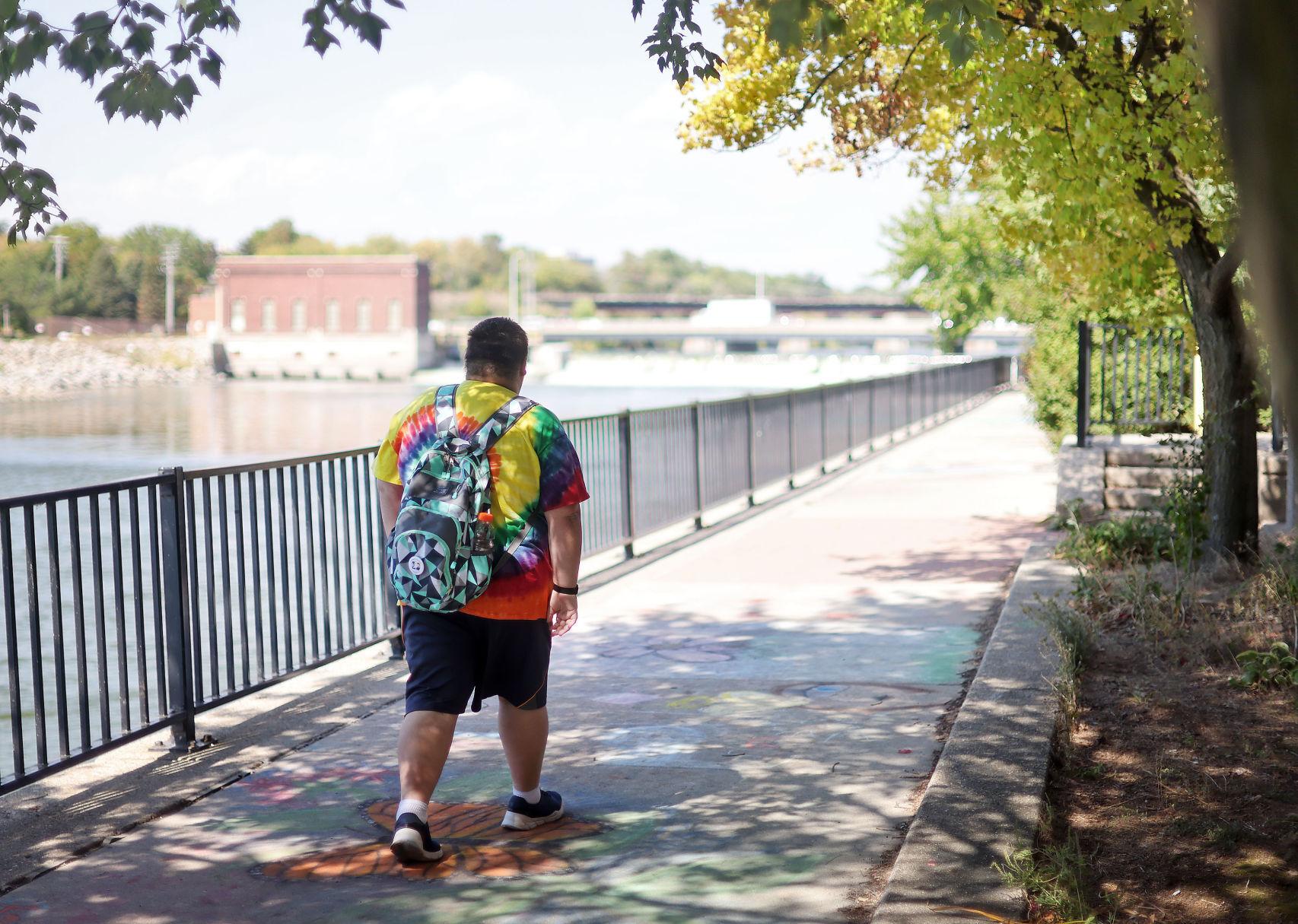 “By the age of 9, I knew deep down I was not in the right body,” he said. He didn’t know anyone who was like him.

“I felt like I was damaged goods,” he said. Suffering from depression, he said he attempted suicide several times.

The 31-year-old began telling people he is transgender 2½ years ago.

A 2021 survey by The Trevor Project found 42% of LGBTQ youth seriously considered suicide in the past year. Numbers were higher for transgender and nonbinary youth.

The survey also found 62% of LGBTQ youth reported symptoms of major depressive disorders in the previous two weeks, and more than 50% reported that they had experienced discrimination based on their sexual orientation or gender identity in the past year.

Counseling helped Johnson realize he was not broken, he said. Now, he wants to get a degree and become a counselor to help others alleviate the kinds of problems he experienced.

If he had seen more awareness in the community earlier, that would have helped with his mental health struggles, he said, which is why he is enthusiastically working on the Pride festival.

Johnson said his family accepts him, so he’s in the lucky minority. Studies have shown a majority of families reject youths who come out to them.

“I’m happy and alive. That’s all they care about,” he said.

He was put in charge of volunteers for the festival.

“We need this,” he said. “It’s about time we get something like this in the community.”

Larson said she has heard from many people, including parents with newly “out” children. She said she talked to a mother of a transgender son who needed a gender-affirming wardrobe and counseling, as well as advice for how to let his school know of his change.

This is not the first Pride event held in the city. Janesville Mobilizing 4 Change, the anti-drug and drinking organization, hosted Pride in the Park in 2018 and 2019.

But Larson plans to make the new event an annual fixture on Janesville’s calendar. 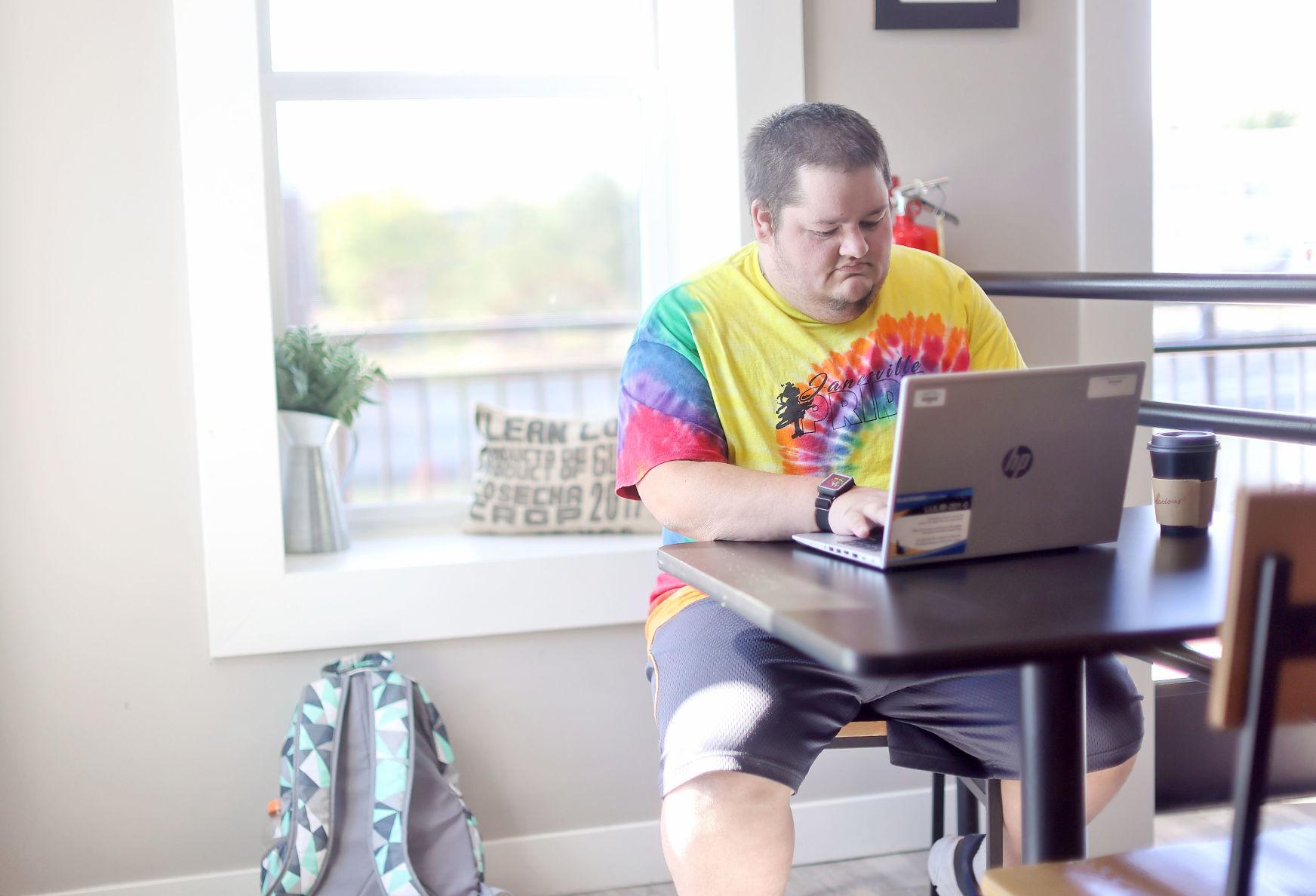 Ezra Johnson studies in a downtown Janesville coffee shop. Johnson, 31, who didn’t reveal that he is transgender until 2½ years ago, wants to become a counselor to help other with same kinds of problems he’s experienced.

And she has received help and support from county and city officials, including Janesville police.

The Oct. 9 event at Courthouse Park will feature a tent where anyone with questions can talk to someone.

Social-service agencies will offer support. Larson noted that substance abuse, violent attacks and homelessness are important issues in the LGBTQ community as 68% of gay youth who reveal themselves to their families are rejected and kicked out.

The festival is also a celebration.

“We want to elevate the queer community in Janesville as high as we possibly can, in every capacity,” Larson said.

What: Janesville Pride, featuring “local queer-owned and affiliated businesses, bands, entertainers, support services and fellow organizations dedicated to uplifting the LGBTQ+ community.” Volunteers will answer questions and to refer those who need it to counselors Bands include the headliner Kat and the Hurricane, a 2020 Best of Madison designee, and Falling Flat.

Cost: Free. Attendees are asked to mask and maintain distance because of COVID-19 concern. Bags with masks and hand sanitizer will be available.

The city of Beloit’s COVID-19 vaccination rate continues to lag behind nearby municipalities and the rate across all of Rock County, according to data released Tuesday by the Wisconsin Department of Health Services.

The state reports that Beloit has a first-dose vaccination uptake rate of 42.7%, or about 15,742 city residents. In terms of completed vaccinations, 39.5%, or 14,566 people, have completed a two-shot series.

The disparities are even bigger when Beloit is compared to nearby townships.

Demographic data shows 47.5% of white residents, 45.5% of Asian residents, 25.1% of Black residents and 24% of American Indian residents have received the vaccine. It should be noted that in the Rock County data, 6.9% of respondents reported race as “other” and 5.7% of those getting a shot did not report race information. 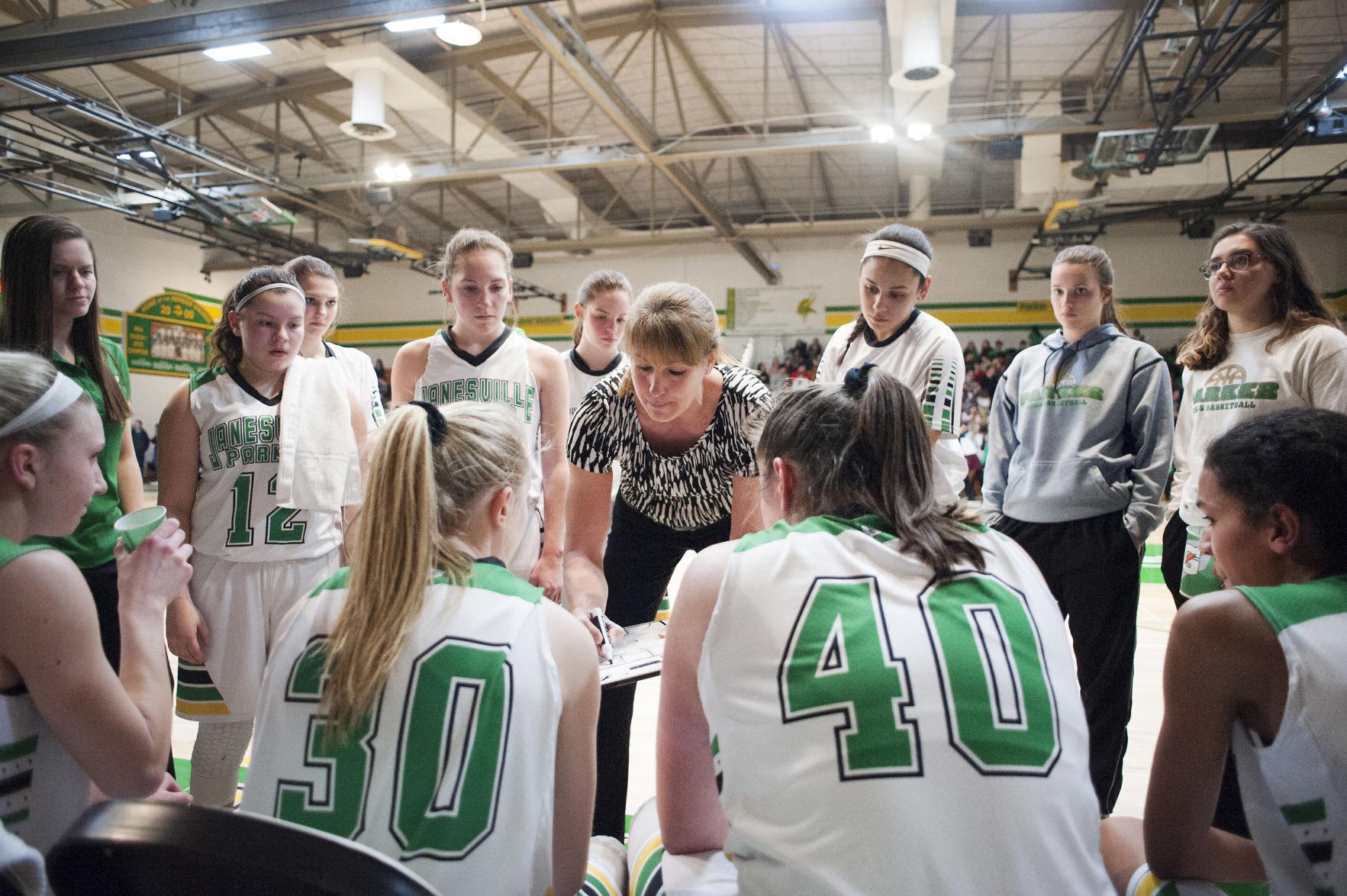 Parker coach Jennah Hartwig, center, speaks to her team during a time-out in the Vikings’ game against Craig on Thursday, February 1, 2018, at Parker High School.

A Milwaukee commercial real estate group just scooped up half a million square feet of occupied warehousing and industrial properties in Janesville.

Zilber Property Group announced Tuesday it has acquired 500,000 square feet of industrial buildings along the Interstate 90/39 corridor on Janesville’s south and east sides in a move that tacks on four, fully leased, warehousing buildings to its growing portfolio in Janesville.

The group announced its purchase of:

According to city of Janesville tax records, the four properties have a combined assessed value of $20 million.

Zilber did not reveal its purchase price for the four properties. The company announced the deal in a press release and did not respond to The Gazette calls seeking more details.

The haul brings to 1.6 million square feet of industrial property in the area that Zilber has bought or developed since 2017. The company also is in the midst of developing two, 170,000-square-foot industrial buildings at Beloit Avenue and West Venture Drive in Janesville that Zilber says are expected to be completed and ready for lease this fall.

Chad Navis, Zilber’s director of industrial investments, said in a statement that the four properties Zilber announced buying this week "supplement” Zilber’s holdings along the busy distribution and shipping corridor of Interstate 90/39 in Rock County. Navis said the Janesville properties “strategically” add to the company's stable of fully occupied buildings of varying sizes in the city.

The I-90/39 project, among other things, is expected to lessen truck traffic bottlenecks through Janesville, and local and state officials have said the lane expansion will be a possible boon for future distribution industry development in Janesville.