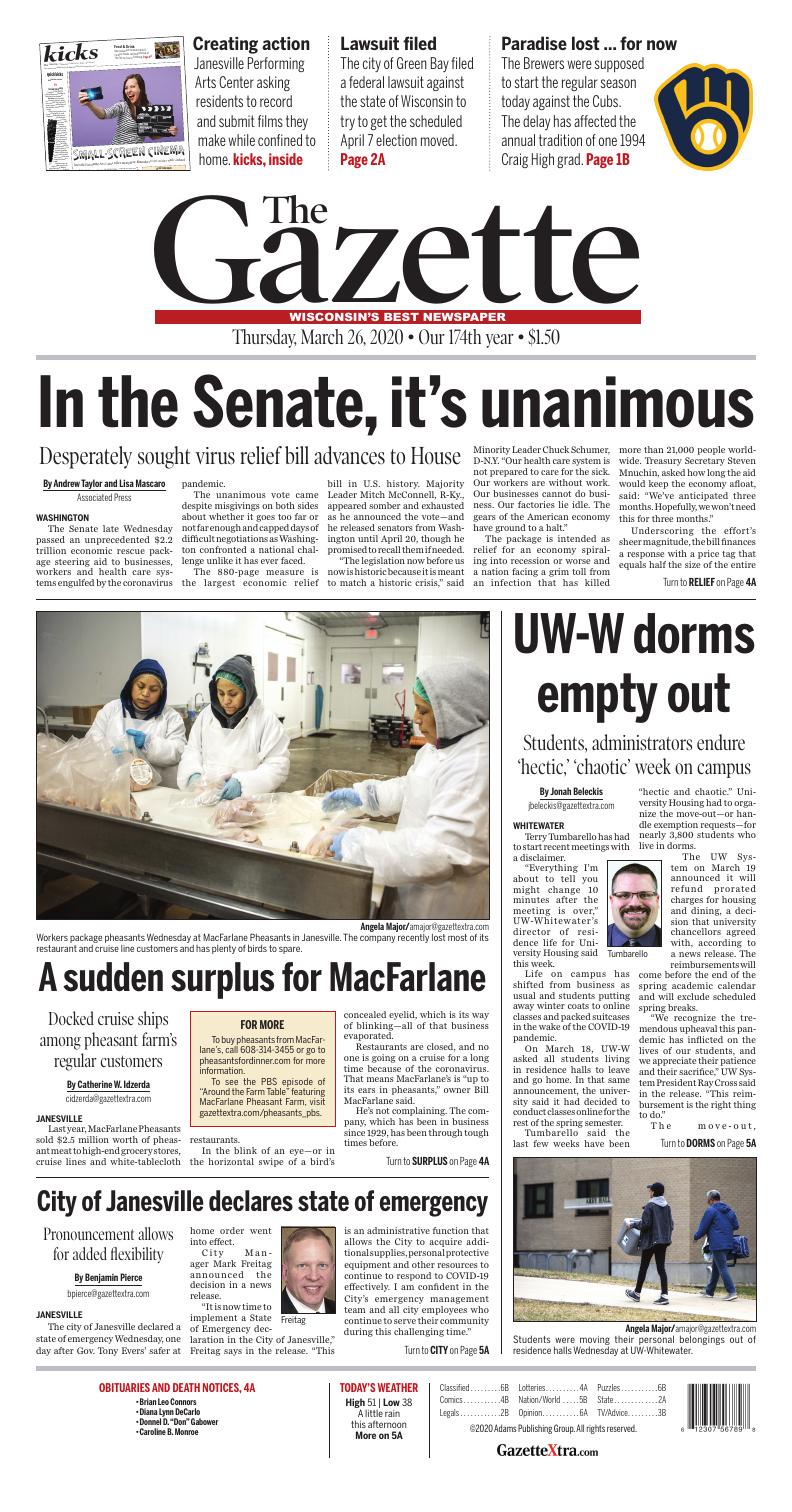 Local
MacFarlane's workers are up to their (ring)necks in pheasants
By Catherine W. Idzerda cidzerda@gazettextra.com

Workers package pheasants Wednesday at MacFarlane Pheasants in Janesville. The company recently lost most of its restaurant and cruise line customers and has plenty of birds to spare.

In the blink of an eye—or in the horizontal swipe of a bird’s concealed eyelid, which is its way of blinking—all of that business evaporated.

Restaurants are closed, and no one is going on a cruise for a long time because of the coronavirus. That means MacFarlane’s is “up to its ears in pheasants,” owner Bill MacFarlane said.

He’s not complaining. The company, which has been in business since 1929, has been through tough times before.

A few years ago, an outbreak of avian flu—among birds, not people—meant he couldn’t send pheasant eggs to Europe. The eggs were on the tarmac at Chicago O’Hare International Airport when the news came that the European Union had halted imports of poultry and poultry products from the United States. Almost 800,000 eggs went into the landfill. 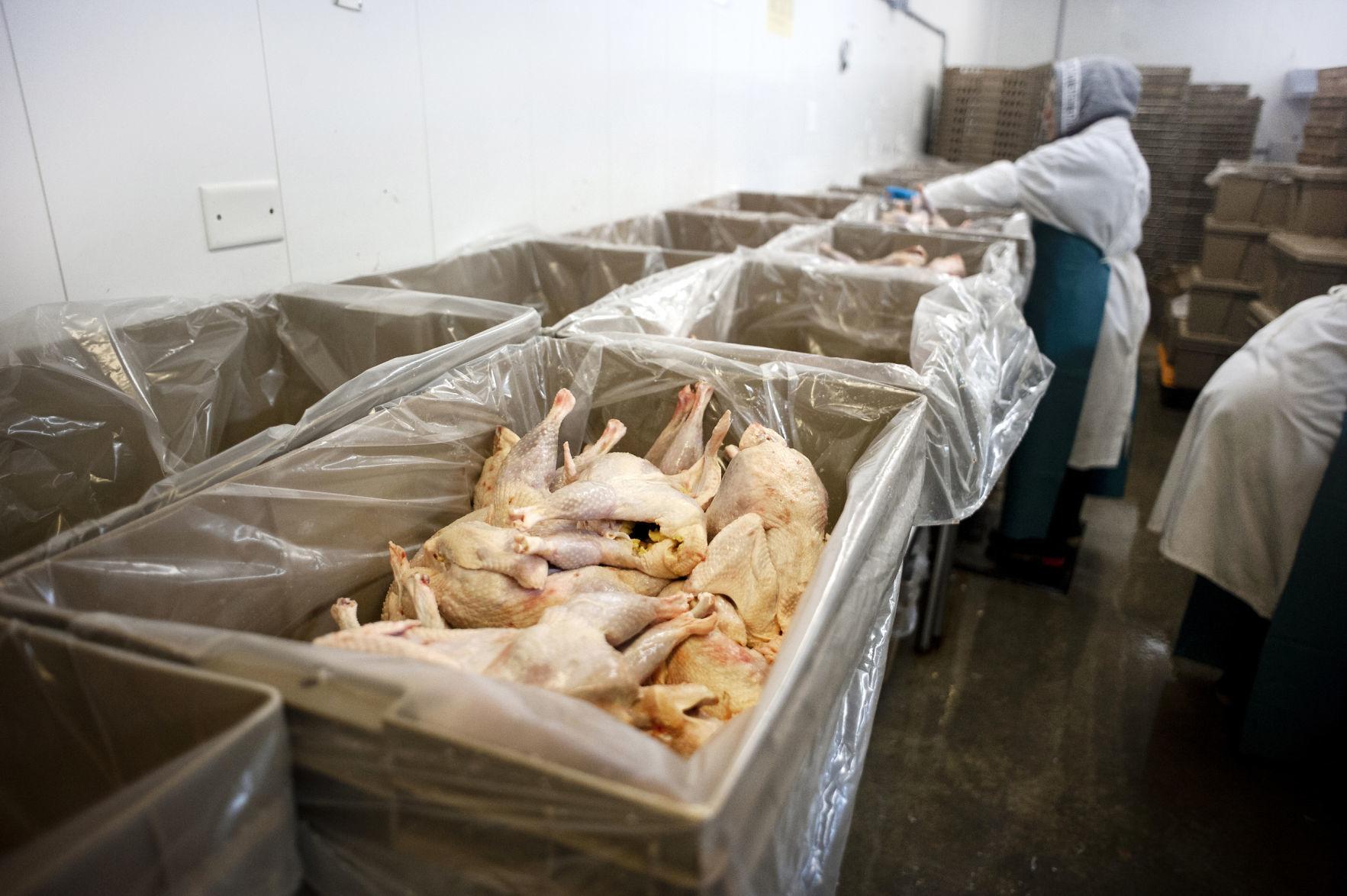 Pheasants are sorted into boxes Wednesday at MacFarlane Pheasants in Janesville.

Now, all businesses are suffering.

“Then, it was just poultry producers. Now it’s everybody,” MacFarlane said. “We’re all in this together.”

Sometimes, it’s just a matter of reminding people of their local choices, he said.

“I think people know we’re here, but they don’t always think of us,” MacFarlane said.

MacFarlane, which has always sold birds out of its store and office on Janesville’s south side, is offering drive-thru service for people who want birds or any other products the company makes.

His pitch? The birds are raised locally without antibiotics, and they’re processed at a federal government-inspected facility.

“Pheasants aren’t at all gamey,” MacFarlane said. “They have more structure than chicken.”

In her classic cookbook, “The Joy of Cooking,” Irma S. Rombauer describes pheasant as having a “very mild, delicate flavor and more texture than chicken.” Rombauer’s book includes a recipe for pheasant braised with gin and juniper, which seems like a good recipe for difficult times. 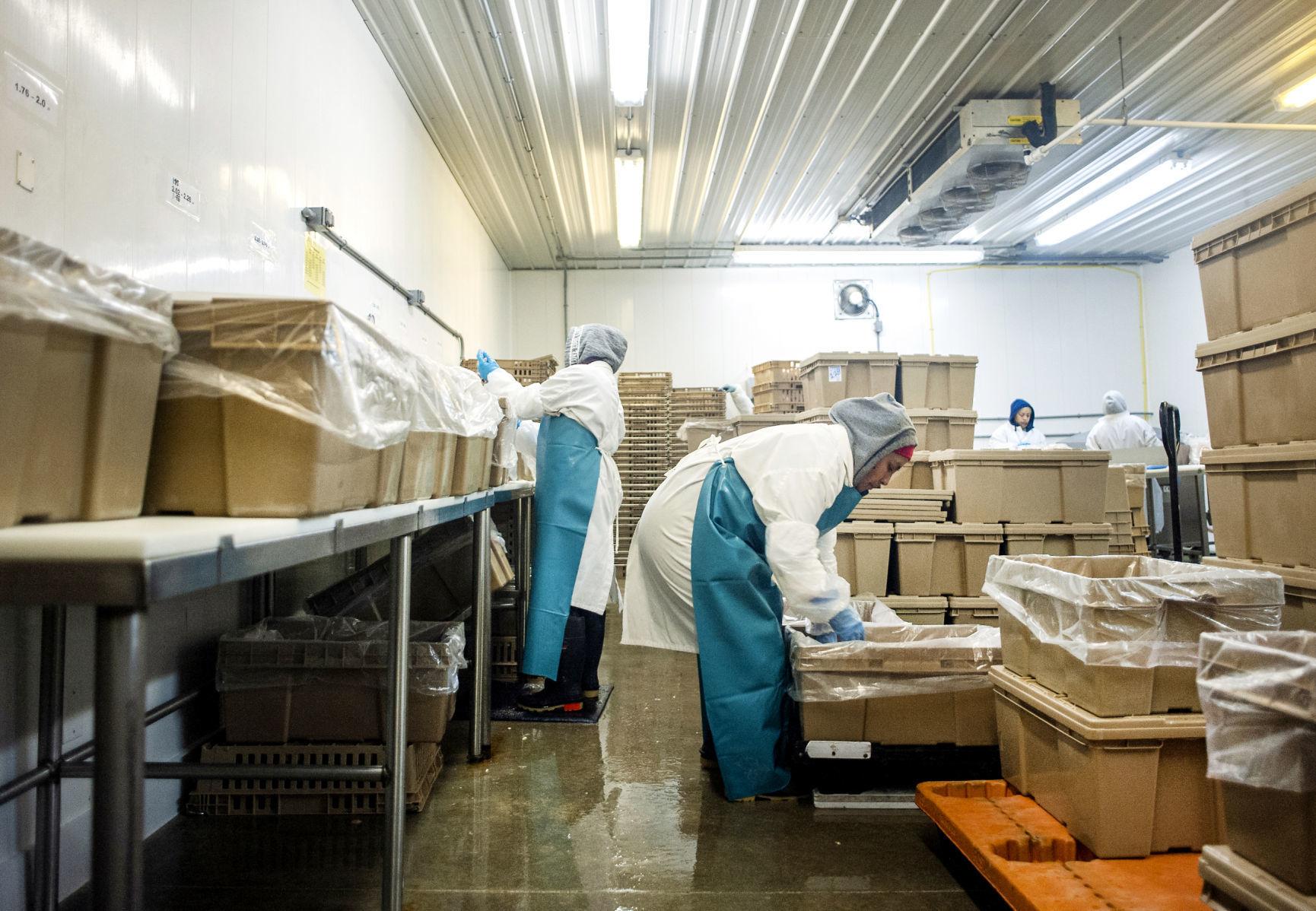 Workers sort pheasants before they are packaged Wednesday at MacFarlane Pheasants in Janesville.

In December 2018, the PBS program “Around the Farm Table” filmed a program at the pheasant farm and featured pheasant in the meal that was prepared on the show.

MacFarlane also has recipes online in case customers need them.

As Woodman’s coolers of chicken have run low, more people are turning to a bird that under normal circumstances might be reserved for special occasions.

To buy pheasants from MacFarlane's, call 608-314-3455 or for more information go to pheasantsfordinner.com.

To see the PBS episode of "Around the Farm Table" featuring MacFarlane Pheasant Farm, visit pbs.org/video/book-club-lunch-with-author-john-hildebrand-qyorw8/

The city of Janesville declared a state of emergency Wednesday, one day after Gov. Tony Evers’ safer at home order went into effect.

“It is now time to implement a State of Emergency declaration in the City of Janesville,” Freitag says in the release. “This is an administrative function that allows the City to acquire additional supplies, personal protective equipment and other resources to continue to respond to COVID-19 effectively. I am confident in the City’s emergency management team and all city employees who continue to serve their community during this challenging time.”

Declaring a state of emergency allows the city to be eligible for additional funding at both the state and national levels and allows Freitag to make purchases, sign contracts and modify internal policies, which typically would require council approval.

The Janesville City Council will be able to approve, amend or repeal the declaration at a future special city council meeting, which has not yet been scheduled, according to the release.

Molly Nolte, public information officer for the city, told The Gazette on Wednesday that while the term “emergency” sounds scary, the order is mainly administrative in nature.

“Even though it sounds like a scary term—you know, ‘state of emergency’ kind of has a bad flavor to it—but that’s just what the administrative function is called. Really what it is is a tool we can put in motion so we can have access to state and federal resources that are often required when it comes to responding to any type of emergency,” she said.

Nolte said the city talked about the timing of the declaration last week. At that point there weren’t multiple confirmed cases of COVID-19 in Rock County, which is why the city waited, she said

Rock County had six confirmed cases of COVID-19 as of 4 p.m. Wednesday, according to a press release from the Rock County Public Health Department.

“Now that it’s progressing and the governor has declared his emergency order No. 12 yesterday, with that plus the multiple cases in our county the city manager thought the time was right now to declare that (state of emergency) and go forward with it,” Nolte said.

Prior to Wednesday’s emergency declaration, the city had activated level 2 emergency operations, which reduced non-essential services and staffing but maintained core services including police and fire services, and public works functions such as sanitation, water and wastewater and others.

City services won’t change from the previous adjustments, and the city will continue to offer limited services.

Nolte said the declaration is another tool to help the city continue to handle the virus smoothly as possible.

“The city is running very smoothly. Our emergency operations center, we have been training in that facility for five years. We have a dedicated staff who complete training year-round to prepare for things just like this.

“We are hopeful that the community is resting easy that we have all of that in place. … we have people working around the clock to make sure that no matter what direction this goes, they can still rely on those core city facilities like police, fire and the department of public works, and if they have questions there will be someone here to answer the phone,” Nolte said.

UW-Whitewater senior Briana Friesner, center, and her father, Dan Friesner, move belongings out of a residence hall at UW-Whitewater on Wednesday. The university is asking students who can move out of the dorms to do so. Classes will be conducted online for the rest of the semester because of the COVID-19 pandemic.

Terry Tumbarello has had to start recent meetings with a disclaimer.

“Everything I’m about to tell you might change 10 minutes after the meeting is over,” UW-Whitewater’s director of residence life for University Housing said this week.

Life on campus has shifted from business as usual and students putting away winter coats to online classes and packed suitcases in the wake of the COVID-19 pandemic.

On March 18, UW-W asked all students living in residence halls to leave and go home. In that same announcement, the university said it had decided to conduct classes online for the rest of the spring semester.

Tumbarello said the last few weeks have been “hectic and chaotic.” University Housing had to organize the move-out—or handle exemption requests—for nearly 3,800 students who live in dorms.

The UW System on March 19 announced it will refund prorated charges for housing and dining, a decision that university chancellors agreed with, according to a news release. The reimbursements will come before the end of the spring academic calendar and will exclude scheduled spring breaks.

“We recognize the tremendous upheaval this pandemic has inflicted on the lives of our students, and we appreciate their patience and their sacrifice,” UW System President Ray Cross said in the release. “This reimbursement is the right thing to do.” 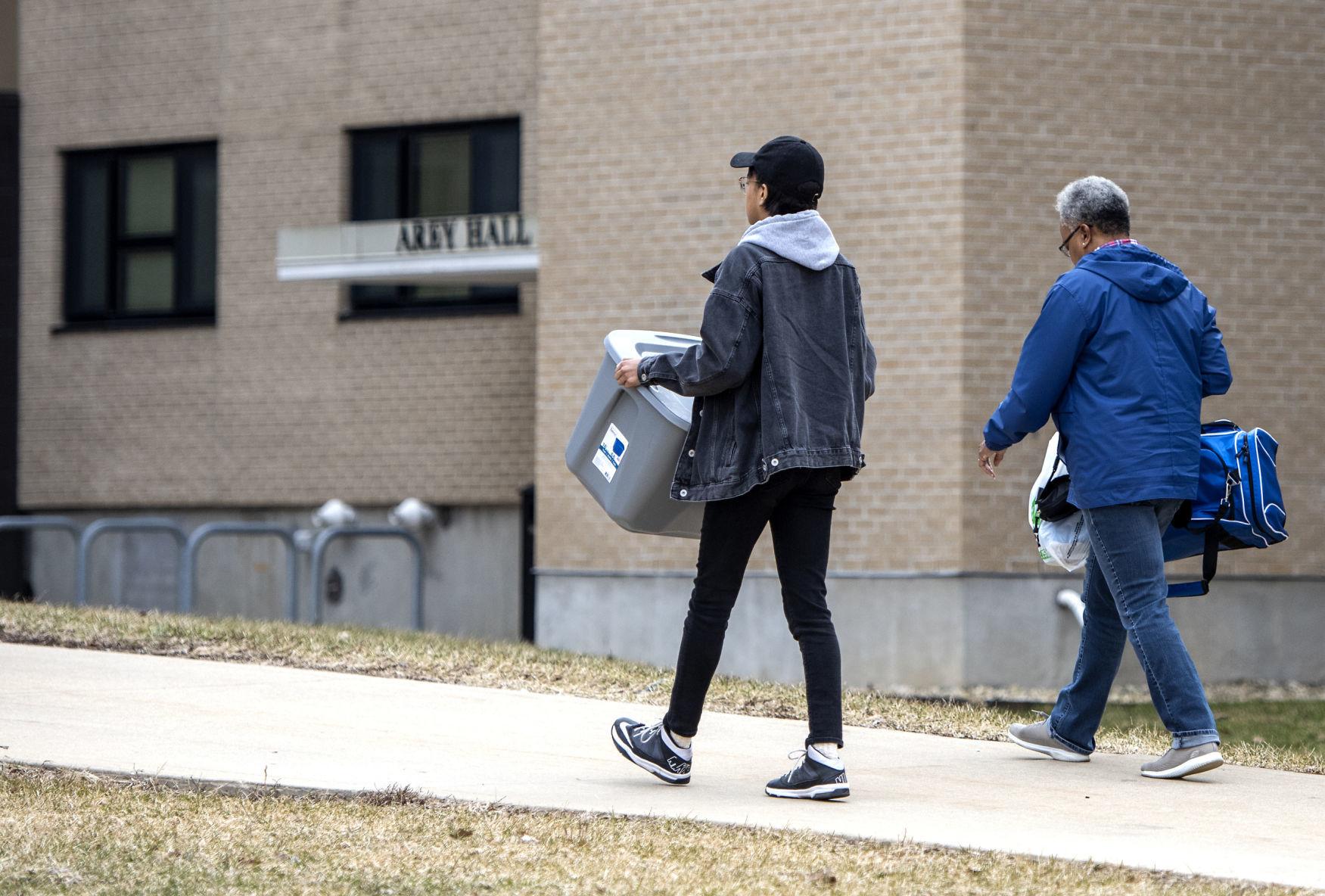 Students were moving their personal belongings out of residence halls Wednesday at UW-Whitewater.

The move-out, Tumbarello said Monday, is an “ongoing process.” Some students have already moved out, and he said times for students to do so have been staggered throughout the week via scheduled appointments to adhere to social distancing mandates.

The effort has been complicated because it comes during UW-W’s spring break. On March 12, UW-W announced it would start its spring break a week early—starting March 14—and run through when it was regularly scheduled to end Sunday, March 29.

The university encouraged students living on campus to take “essential belongings, academic materials, laptops and medications with them” and not to plan on returning until at least April 17.

But in a world where news changes suddenly and directives flow down from the state and federal level, UW-W about a week later asked all students who were able to leave the dorms to do just that.

The university has acknowledged, however, that not every student can go home—whether because of travel restrictions or a lack of internet access for online classes.

Tumbarello said the exemption form is a way for students to explain their situations and estimate how much time they need before moving out—even if it’s for the rest of the semester.

While he said there is no “hard deadline,” the regularly scheduled move-outs are set through late afternoon Friday. Several students only needed an exemption through this upcoming weekend to move out, he said.

Some students left for spring break and needed to come back sooner than expected, but Tumbarello said officials are granting exemptions and working out details with those students.

He stressed they’re not going to just throw away someone’s stuff. If they have not heard from particular students, officials will try to contact them directly, he said.

Tumbarello said it was too early to estimate how many students were staying in dorms, but he said a “high majority” had moved out or were planning to move out before semester’s end.

He praised the work his staff has done to make it all happen. And although the changes came quickly and asked a lot of students and families, he said everyone on that side understands “that we’re in a crisis.”

“We have been inundated with positive comments” about how the process has unfolded, he said. 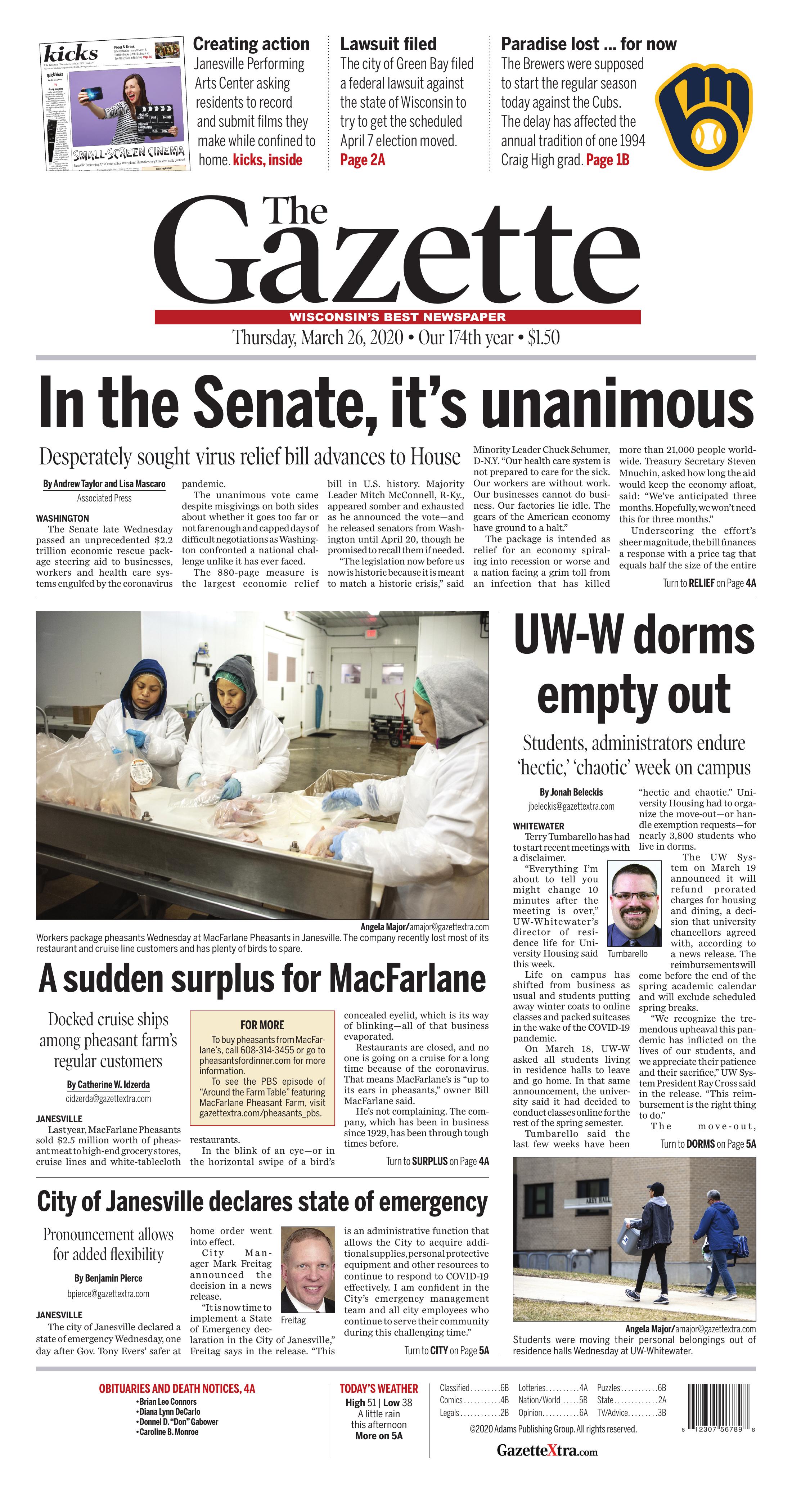