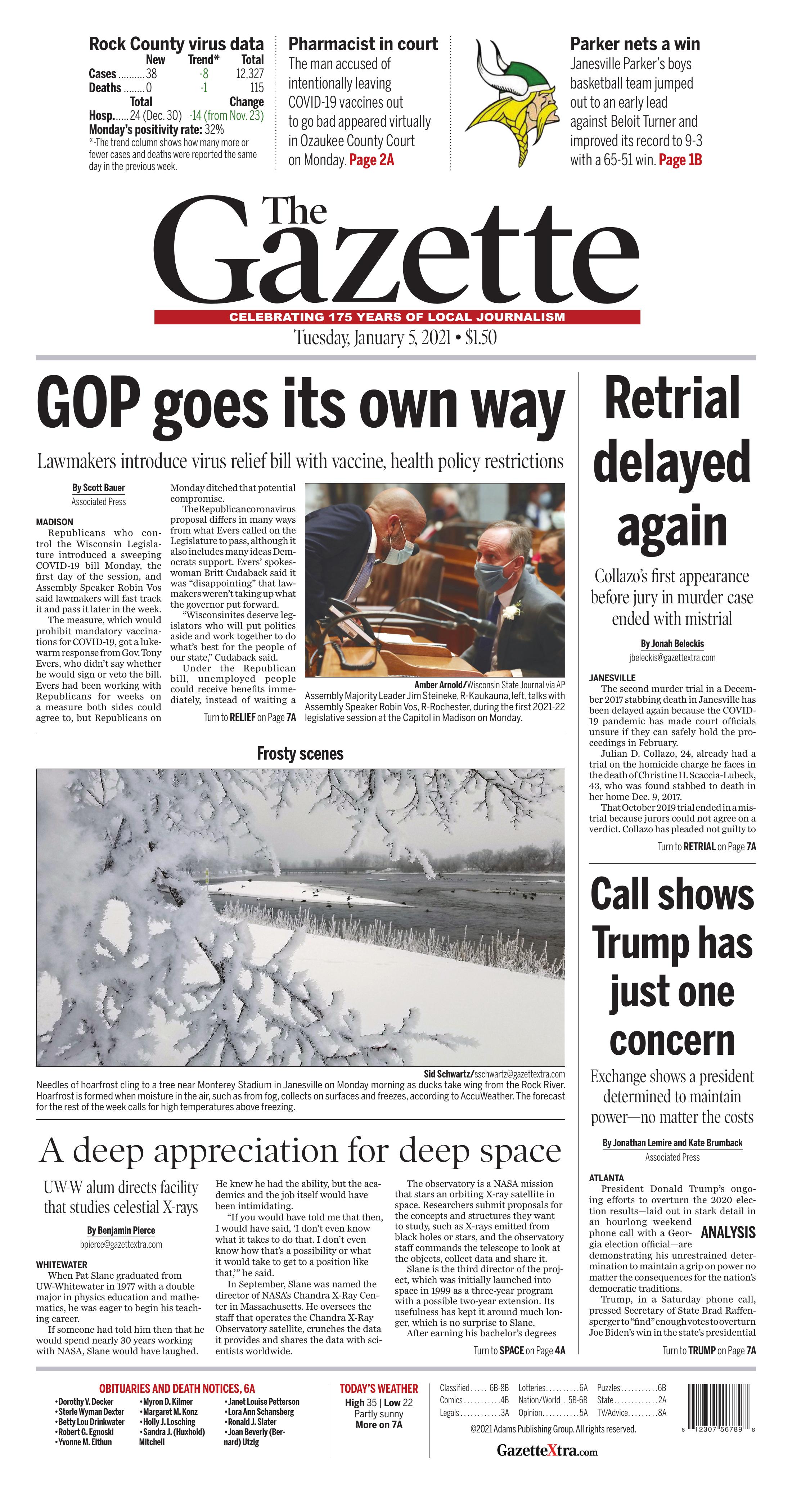 Pat Slane explains the parts of a supernova remnant seen in an image from the Chandra X-Ray Observatory, a NASA satellite. Aspects of the supernova, such as the neutron star Slane is pointing to, have been discovered only with the help of Chandra. In September, Slane, a UW-Whitewater alumnus, was named director of the observatory’s X-ray center.

When Pat Slane graduated from UW-Whitewater in 1977 with a double major in physics education and mathematics, he was eager to begin his teaching career.

If someone had told him then that he would spend nearly 30 years working with NASA, Slane would have laughed. He knew he had the ability, but the academics and the job itself would have been intimidating.

In September, Slane was named the director of NASA’s Chandra X-Ray Center in Massachusetts. He oversees the staff that operates the Chandra X-Ray Observatory satellite, crunches the data it provides and shares the data with scientists worldwide.

The observatory is a NASA mission that stars an orbiting X-ray satellite in space. Researchers submit proposals for the concepts and structures they want to study, such as X-rays emitted from black holes or stars, and the observatory staff commands the telescope to look at the objects, collect data and share it.

Slane is the third director of the project, which was initially launched into space in 1999 as a three-year program with a possible two-year extension. Its usefulness has kept it around much longer, which is no surprise to Slane.

After earning his bachelor’s degrees at UW-Whitewater, Slane taught high school physics while working on a master’s degree in math at UW-Milwaukee.

He eventually studied physics in graduate school at UW-Madison, where he fell in love with research projects. When he graduated, NASA had just approved the Chandra project, which took several years of planning before it launched.

He decided to apply and began working in a laboratory studies job for the project in 1988. Over the last 32 years, Slane has worked his way up the Chandra ladder.

“It takes a lot of work to continue managing an aging observatory,” he said, “and so there is some level of satisfaction and some level of responsibility that I feel for helping to continue to manage it and get really great science out of it in its later years.

“It takes someone who’s really been here in the nuts and bolts for the whole time to understand what that really requires. And so I’m happy to be in the position that I’m able to do that.”

At UW-Whitewater, Slane originally had planned to study math. But after studying physics, he realized it was his true passion.

“By the time I was a junior, I knew that the people in the physics department had done something very special for me,” he said. “Basically speaking, I was just another kid at UW-Whitewater who has some talents in physics and math, but there’s lots of talented students at UW-Whitewater. The physics department recognized that. And, you know, they pulled me aside and they said, ‘We want you to continue on this.’”

He helped professors with various studies and publications, and they encouraged him to continue his education.

“He was just a very good student, and he showed genuine interest,” Bergsten said.

Asked if he was surprised about Slane’s career success, Bergsten pointed to a research project that involved his former student.

He said Slane constantly searched for more information and more ways to help.

“I didn’t doubt it for a minute,” Bergsten said. “He was just one of the best students, and that’s showing up in the real world of physics. We’re very proud of him. That’s a big honor for him to be where he’s at.”

Although he is nearing retirement age, Slane said he hasn’t considered retirement even once. For the last 30 years, he has loved going to work every day.

Slane continues to mentor college students who work on the project, and he has lectured on physics and the observatory around the world. He hopes when it is time to retire, the Chandra project will live on.

For now, he is enjoying pursuing his passion in a new role.

“The end goal now is either to continue nurturing Chandra until it’s the end of the project, as a leader of the center, or perhaps the even better scenario is that Chandra just continues to work successfully long enough that I’m at the point where I retire,” Slane said.

“Being here in this position throughout the mission would be extremely satisfying. But at the same time, working on it, I have no immediate notion of retiring because I love what I do too much, and I really look forward to continuing to do what I’m doing.”

The murder trial for a December 2017 stabbing death in Janesville has been delayed once again because the COVID-19 pandemic has made court officials unsure if they can safely hold the proceedings in February.

Julian D. Collazo, 24, already had a trial on the homicide charge he faces in the death of Christine H. Scaccia-Lubeck, 43, who was found stabbed to death in her home Dec. 9, 2017.

That October 2019 trial ended in a mistrial because jurors could not agree on a verdict. Collazo has pleaded not guilty to a single charge of first-degree intentional homicide, which carries a life prison sentence.

Also Monday, Rock County Judge Barbara McCrory ruled against a defense motion to change the venue of the trial. She said the publicity of the case was appropriate and stuck to covering what happened during the original trial.

Collazo’s trial was already postponed before because of the COVID-19 pandemic.

He was most recently scheduled for a trial to run the week of Feb. 8, but Judge Barbara McCrory said Monday morning that she could not guarantee that Rock County would be in a position to hold proceedings and keep everyone safe.

All sides agreed that they wanted the trial to happen and are upset to see another delay.

Defense attorney Jeffrey Jensen pointed out how his client is still sitting in custody. District Attorney David O’Leary said the victims would also like to see this matter resolved sooner rather than later.

At the same time, all appeared to understand that the county is not in a position to hold a safe trial.

New trial dates were not set as of Monday. The parties will next convene at 9 a.m. Feb. 9 for a status conference.

This story will be updated with further some more information from Monday’s hearing.