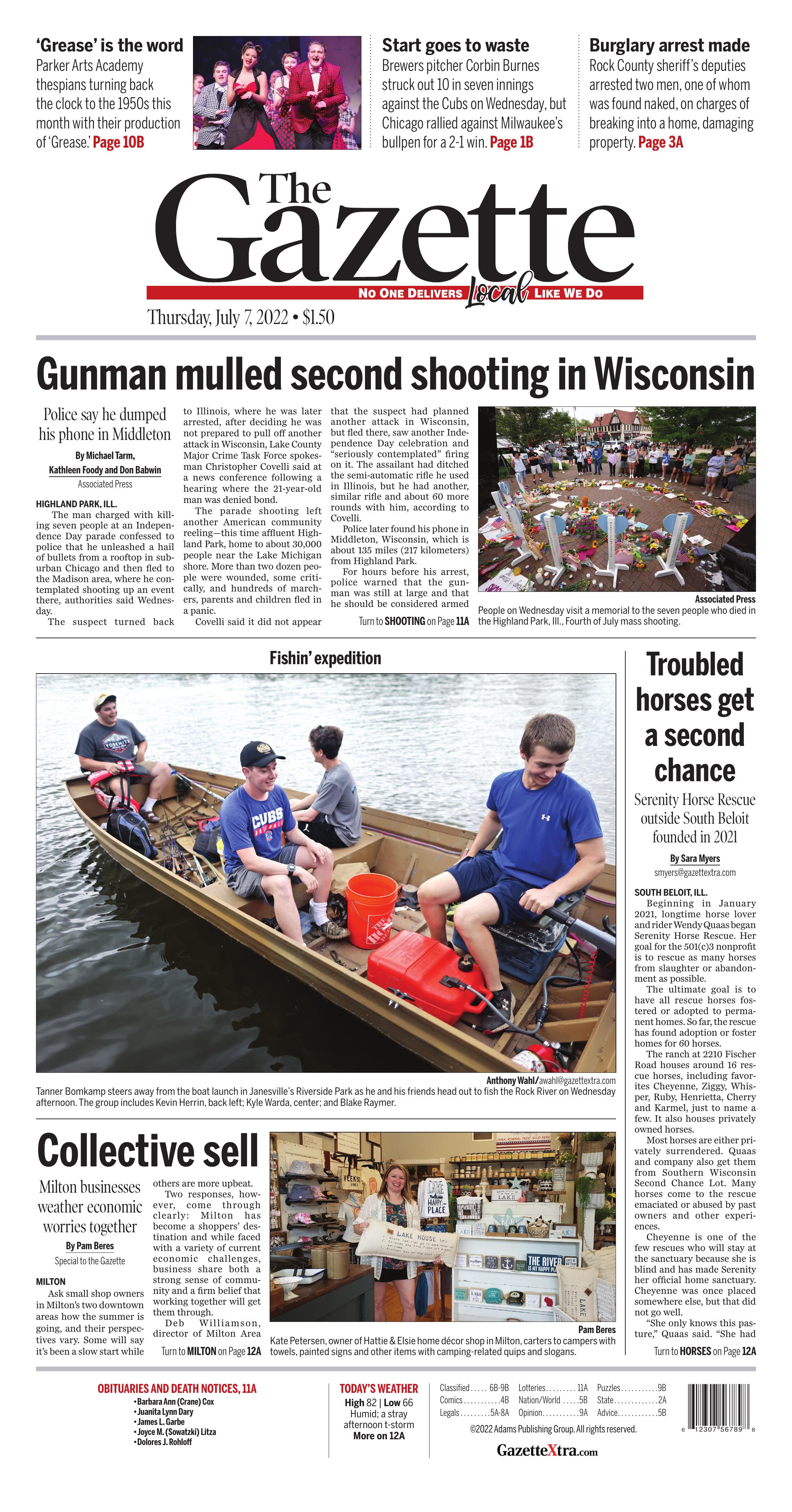 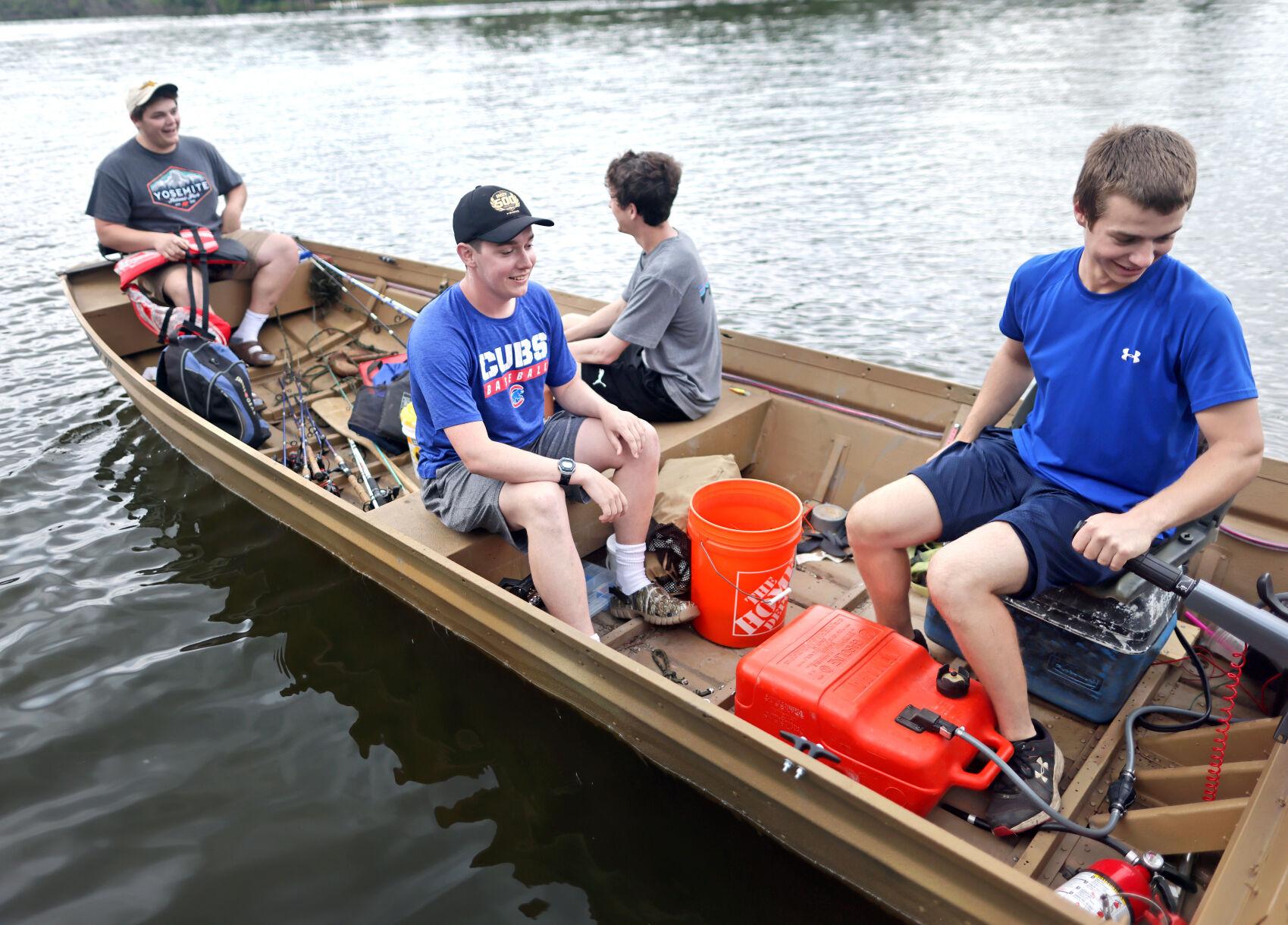 Tanner Bomkamp steers away from the boat launch in Janesville’s Riverside Park as he and his friends head out to fish the Rock River on Wednesday afternoon. The group includes Kevin Herrin, back left; Kyle Warda, center; and Blake Raymer.

Kate Petersen, owner of Hattie & Elsie home décor shop in Milton, carters to campers with towels, painted signs and other items with camping-related quips and slogans.

Ask small shop owners in Milton’s two downtown areas how the summer is going, and their perspectives vary. Some will say it’s been a slow start while others are more upbeat.

Two responses, however, come through clearly: Milton has become a shoppers’ destination and while faced with a variety of current economic challenges, business share both a strong sense of community and a firm belief that working together will get them through.

Deb Williamson, director of Milton Area Chamber of Commerce, said the presence of small businesses creates a vibrant downtown and brings unique opportunities. Profits tend to stay local and small business owners also typically spend their money locally, in support of one another.

Milton boasts a unique blend of merchants and experiences, including the Milton House Museum, three local wineries, small shops in Goodrich Square and Merchants Rowe. The Red Rooster, offering modern country decor, has been an anchor for over two decades, and Goodrich Antiques and Pene Jenta clothing boutique are also well-known. Several new shops have opened in Goodrich Square within the last two years: Farmhouse Finds and Hattie & Elsie, both of which sell home décor, each with their own style. And Sunny & Olive, Goodrich Square’s newest shop, sells women’s clothing and accessories.

Catering to campersNearby campgrounds have traditionally been a big draw for Milton businesses, and the pandemic restrictions of the past two years hurt as they stayed away, said Beth Marquart, owner of Corner Closet resale shop.

Marquart said said she’s thrilled to see that now, despite rising gas prices, campers are returning. They are “the economic engine during the summer months,” she said.

Tami Dosch, owner of the Red Rooster, said she similarly has a good following from campers. At the start of each summer “they come in and are like, ‘hey we’re back,’” she said.

Marquart said most campers come from nearby cities like Rockford, Madison, Milwaukee and Chicago. “This is their spot,” she said. “This is where they come and they love it.”

“We know their first names,” she said, and the names of their children and grandchildren.

But amid the boost from returning campers, other challenges have arisen.

Inflation, supply chain backlogs and product shortages are all obstacles, Milton business owners say. So, too, is the nationwide staffing shortage. Some businesses have part-time employees but most are run by the owners themselves with help from family or friends.

And as the cost of good rise, they sense many customers are feeling pinched.

“People are going to be more choosy and more cautious in what they purchase,” said Dosch. It’s a want versus a need decision for some, she said, a problem for a shop that doesn’t cater to basic necessities.

“Everything here is just a want. It’s not a need,” Dosch said.

“I think with the economy in general, with gas prices and food prices going up, people aren’t spending as much on non-essential purchases,” Dosch continued.

“We’ve had to increase our prices but then we’re also having to be careful not to increase them so much so that the customers can’t afford to shop,” Petersen said.

To combat inflation, owners have had to try different things.

“I buy most of my goods at auctions and I’m a little more careful in what I buy now,” Patterson said. He carefully tracks new and repeat customer purchases, zeroing in on what to stock

“I know pretty much what my customers are looking for,” he said.

Nikki Olson, owner of Farmhouse Finds home décor said sales have dipped, leading she and her husband to reopen the Etsy Store they shut down two and a half years ago, when they opened their brick and mortar location.

Becky Hillmann, owner of the clothing boutique Pene Jenta also said she’s buying differentlyt. “I have to buy way in advance because otherwise I’m not going to get,” items, she said.

She recently walked into a showroom and was told they were already sold out of winter items, forcing her to branch out and find new vendors. “Warehouses aren’t going to be like they used to be,” Hillmann said.

Williamson said it’s no longer enough for shop owners to know their business and their community. Now, she said, they also have to be well-versed in a new way of working, while still retaining their authentic vibe and promoting that.

Increasingly, they’re turning to each other for help and support.

Petersen recently printed a flyer listing clothing boutiques, home décor shops and resale and antique shops in both downtown areas, that many shop owners now keep on their counters.

Olson and Petersen have been meeting with other Goodrich Square business owners to brainstorm ideas that have included holding monthly small business nights and ladies nights.

“To overcome this recession, we have to think outside the box,” she said. “You have to change it up, figure out what works and just keep trying.”

Hillman recalls concerns in 2015 over the business impact of round-a-bouts and Dosch recalls the economic challenges of 2008.

“I got through all of that, so we just kind of take it as it is,” Dosch said.

“There’s a little challenge here and there but it’s just the way the world is. You just gotta work your business,” Hillman agreed. 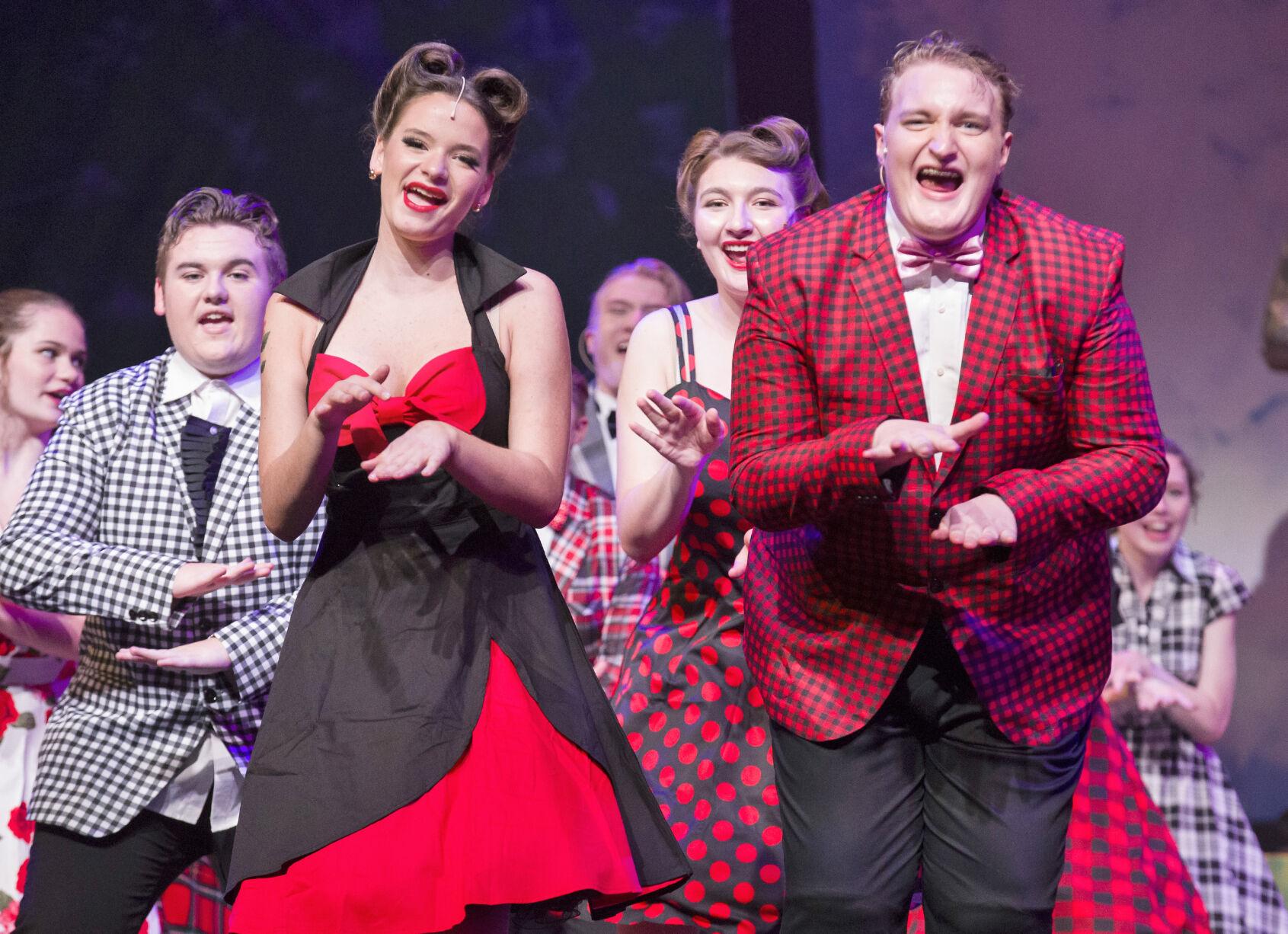 Hollee Riggio spends some time with a rescue horse while volunteering at Serenity Horse Rescue, a nonprofit horse rescue outside South Beloit, Ill., on Wednesday evening. The organization was created in January 2021 and has already found adoption or foster homes for 60 rescue horses.

Serenity Horse Rescue volunteer Hollee Riggio spends some time with a blind Appaloosa mare named Cheyenne while volunteering Wednesday at the rescue in South Beloit, Ill. The organization was created in January 2021 and has already found adoption or foster homes for 60 rescue horses.

Kendyll Smith, 16, holds on to a 1-year-old Arabian named Munchie while volunteering at Serenity Horse Rescue on Wednesday evening in South Beloit, Ill.

Beginning in January 2021, longtime horse lover and rider Wendy Quaas began Serenity Horse Rescue. Her goal for the 501(c)3 nonprofit is to rescue as many horses from slaughter or abandonment as possible.

The ultimate goal is to have all rescue horses fostered or adopted to permanent homes. So far, the rescue has found adoption or foster homes for 60 horses.

The ranch at 2210 Fischer Road houses around 8 rescue horses, including favorites Cheyenne, Ziggy, Whisper, Ruby, Henrietta, Cherry and Karmel, just to name a few. It also houses privately owned horses. There are eight other Serenity rescue horses housed at other farms in the area.

Most horses are either privately surrendered. Quaas and company also get them from Southern Wisconsin Second Chance Lot. Many horses come to the rescue emaciated or abused by past owners and other experiences.

Cheyenne is one of the few rescues who will stay at the sanctuary because she is blind and has made Serenity her official home sanctuary. Cheyenne was once placed somewhere else, but that did not go well.

“She only knows this pasture,” Quaas said. “She had her sight when she lived here before and she tried to go to a different home, and it was a disaster. She lost a bunch of weight and she was falling into stuff and took down a fence.”

Karmel is another horse who might possibly stay at Serenity for good. She is a large Belgian mare around 25 years old and is a favorite of Quaas and volunteer Amber Clark. Clark is also on the rescue’s eight-person board of directors.

“The heart and soul right here,” Quaas said while patting Clark on the back. “She gives me a little break, and I can trust her. She knows anything and everything about horses and gives them all the love they could possibly ever want.”

Clark is a dedicated volunteer who is on the farm four to five times a week.

“The scientific average age is 24, but if you take good care of them, they can live well into their 30s,” Quaas said. “So we’re hoping that for all these old guys. Karmel, Whisper and Henriette are all 25.”

The rescue, which originally started by rescuing two horses at a time, has now housed 45 animals.

“I supply all the hay for the barn, and that’s what I do in exchange for my board,” Quaas said. “That includes all the private horses, too. Just four horses have passed away since the start of the rescue.”

Coming later this month is the rescue’s third fundraiser, “Par Fore The Horse,” scheduled July 31 at Beaver Creek Golf Course in Capron, Illinois. The outing will start at 11 a.m. and includes nine holes of golf and a buffet. To buy a ticket, email serenityhorses1@gmail.com or call Quaas at 847-445-7839.

The rescue is currently at capacity with its number of horses. Anyone interested in fostering, adopting or volunteering should call Quaas at the number above.