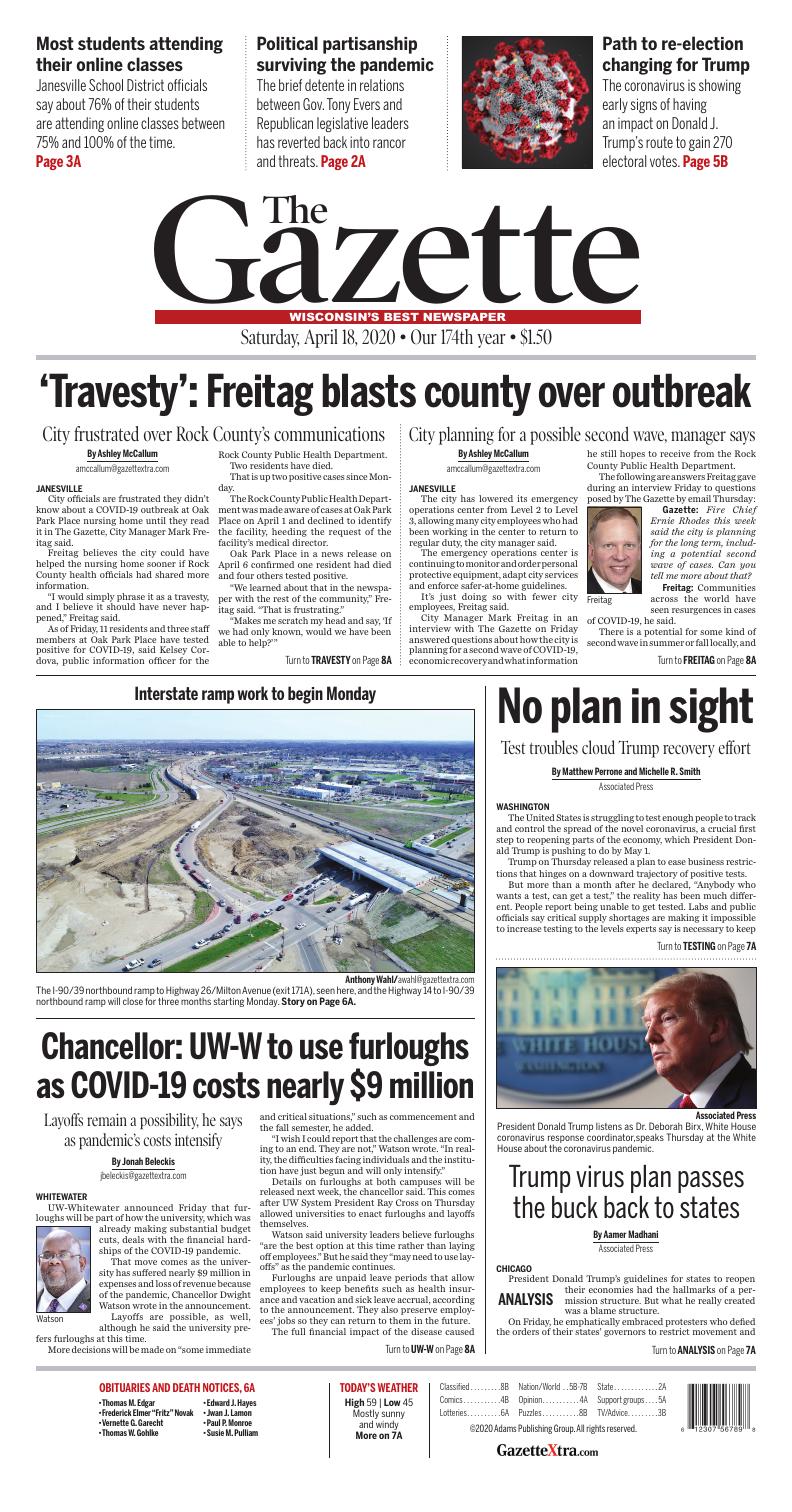 The city has lowered its emergency operations center from Level 2 to Level 3, allowing many city employees who had been working in the center to return to regular duty, the city manager said.

In an interview with The Gazette, Janesville City Manager Mark Freitag talked about challenges and frustrations as the city continues to operate and help fight the COVID-19 pandemic. Freitag, a former military man, compared some of the work to combat.

City Manager Mark Freitag in an interview with The Gazette on Friday answered questions about how the city is planning for a second wave of COVID-19, economic recovery and what information he still hopes to receive from the Rock County Public Health Department.

The following are answers Freitag gave during an interview Friday to questions posed by The Gazette by email Thursday:

Gazette: Fire Chief Ernie Rhodes this week said the city is planning for the long term, including a potential second wave of cases. Can you tell me more about that?

Freitag: Communities across the world have seen resurgences in cases of COVID-19, he said.

There is a potential for some kind of second wave in summer or fall locally, and the city wants to be ready for it.

The city is running predictions from now until the end of the year to know how many pieces of personal protective equipment could be needed, what it will cost and when it will need to be ordered.

Emergency medical shelters have been purchased to accommodate hospital overflow, if needed. Pop-up shelters could give each hospital 25 more beds.

Gazette: You’ve been critical of the amount of information the county health department has been releasing. This week, the county began releasing more information. Are you satisfied?

Freitag: “I guess the short answer is no, I am not satisfied” he said.

He is pleased the county has started sharing more information on age, gender and census tract location of COVID-19 infections but said it is not specific enough.

Three Janesville census tracts have the highest number of COVID-19 cases in the county.

Freitag questions why it took five weeks to get information and why the county can’t share more specific geographic information such as cases per 500 block.

If the city knows what neighborhoods are infected and can monitor case spread, it can intervene by reaching out to community leaders, giving people masks or going door to door with education.

Gazette: Gov. Tony Evers announced an extension of the safer-at-home order for another month. What do you think about that?

Freitag: City staff were not surprised safer-at-home was extended.

He empathizes with Evers having to decide how to keep people safe and also protect the economy.

Freitag is concerned it will be harder to keep people at home as the weather gets better and as people start feeling more cooped up, he said.

City staff has started planning on how city services, such as reopening the library, can gradually be reinstated as safer-at-home orders loosen.

”We are going to have to watch as this develops because of the potential for a second wave and be prepared,” Freitag said.

Gazette: What can the city do to help rebuild the local economy?

The city does not have a lot of resources to directly help the economy but can look at ordinance or policy changes that will help businesses, he said.

As of now, the city allows those license holders to sell only pre-packaged beer or wine.

”Bottom line is we need to figure out how people can spend money to reinvigorate the local economy. I think it is important people promote buy locally.”

Gazette: How long do you think it will take to get Janesville’s economy back to where it was before the pandemic?

Freitag: “I don’t think there’s a simple answer by any means,” he said.

It will be dependent on the state and national economies.

Some local industries such as distribution and food processing are doing well and even expanding in some cases, he said.

The retail sector will need the most help.

Janesville’s economy is more diverse than during the Great Recession and is much more poised to survive the economic downturn, he said.

City Manager Mark Freitag believes the city could have helped Oak Park Place nursing home sooner if officials had been made aware of the outbreak.

Gazette: Are there any city projects or issues that you think will have to be put on the back burner so the city can focus on making it through the pandemic?

Freitag: The city wants programs and services that affect the public to be preserved.

Cuts will more likely happen behind the scenes, he said.

For example, employee performance evaluations and a planned salary, benefit and wage analysis for city employees are being put on hold.

The city will not roll out nine new city buses this spring as planned because the manufacturer has stopped production.

A planned citizen satisfaction survey will be postponed.

“I am not so sure now is the right environment to ask people about city services,” he said.

An outbreak of COVID-19 cases at Oak Park Place has led to the deaths of two residents.

City officials are frustrated they didn’t know about a COVID-19 outbreak at Oak Park Place nursing home until they read it in The Gazette, City Manager Mark Freitag said.

Freitag believes the city could have helped the nursing home sooner if Rock County health officials had shared more information.

“I would simply phrase it as a travesty, and I believe it should have never happened,” Freitag said.

That is up two positive cases since Monday.

One-third of Rock County COVID-19 cases have been hospitalized

State data shows one-third of Rock County residents who have tested positive for COVID-19 have been hospitalized.

The Rock County Public Health Department was made aware of cases at Oak Park Place on April 1 and declined to identify the facility, heeding the request of the facility’s medical director.

Oak Park Place in a news release on April 6 confirmed one resident had died and four others tested positive.

“We learned about that in the newspaper with the rest of the community,” Freitag said. “That is frustrating.”

“Makes me scratch my head and say, ‘If we had only known, would we have been able to help?’”

One resident of Janesville nursing facility Oak Park Place has died from COVID-19 infection, and four more residents from the nursing home have tested positive for the novel coronavirus, according to the Rock County Health Department.

Since learning of the outbreak, the city has provided Oak Park Place:

“It is reactionary, unfortunately, but we recognize we did not know about Oak Park Place and we cannot afford that to happen again,” Freitag said.

County health officials are in consistent communication with Oak Park Place and are passing along guidance from the state Department of Health Services’ Division of Quality Assurance, Cordova said.

The division oversees licensing and regulation of facilities that provide health, long-term care, mental health and substance use disorder services.

The state declined to answer questions from The Gazette about what involvement the state has had with Oak Park Place.

City Manager Mark Freitag in an interview with The Gazette on Friday answered questions about how the city is planning for a second wave of COVID-19, economic recovery and what information he still hopes to receive from the Rock County Public Health Department.

“Due to patient privacy and safety concerns, I am unable to comment on specific facilities,” spokeswoman Jennifer Miller said in an email.

“I can tell you, the local public health office in the facility’s jurisdiction follows up with everyone who tests positive, or their guardians, working with each patient to determine who they may have been in contact with to isolate, quarantine, or test when appropriate.”

The state Division of Quality Assurance would do an “unannounced investigation” if it received complaints about a facility, Miller said.

Miller did not say if an investigation will be or has been conducted at Oak Park Place.

Chancellor Dwight Watson, right, sits with other administrators at a listening session Feb. 10 at UW-Whitewater at Rock County in Janesville.

UW-Whitewater announced Friday that furloughs will be part of how the university, which was already making substantial budget cuts, deals with the financial hardships of the COVID-19 pandemic.

That move comes as the university has suffered nearly $9 million in expenses and loss of revenue because of the pandemic, Chancellor Dwight Watson wrote in the announcement.

Layoffs are possible, as well, although he said the university prefers furloughs at this time.

More decisions will be made on “some immediate and critical situations,” such as commencement and the fall semester, he added.

“I wish I could report that the challenges are coming to an end. They are not,” Watson wrote. “In reality, the difficulties facing individuals and the institution have just begun and will only intensify.”

Details on furloughs at both campuses will be released next week, the chancellor said. This comes after UW System President Ray Cross on Thursday allowed universities to enact furloughs and layoffs themselves.

Watson said university leaders believe furloughs “are the best option at this time rather than laying off employees.” But he said they “may need to use layoffs” as the pandemic continues.

Furloughs are unpaid leave periods that allow employees to keep benefits such as health insurance and vacation and sick leave accrual, according to the announcement. They also preserve employees’ jobs so they can return to them in the future.

The full financial impact of the disease caused by the novel coronavirus is not yet known. Watson said UW-W has to prepare for reductions in income from areas such as tuition, housing and dining.

Watson said other steps the university might take include:

“The scope and the severity of the situation is deeply concerning,” he said in the announcement.

“This is sobering news,” he said. “I understand that.”

But Watson said the university is in a better place to deal with the pandemic because of what it has already done to find operational efficiencies, track down new revenue sources and reduce unbudgeted and operating expenses.

In January, Watson announced that the university needed to make $12 million in base budget cuts over the next two years to deal with declining enrollment.

In his announcement Friday, Watson said officials will submit their fiscal year 2021 budget as planned without accounting for the pandemic. But budget adjustments might be made if needed.

Questions or suggestions for Watson and his cabinet can be directed to Chief of Staff Kari Heidenreich at HeidenreKA12@uww.edu.

“We have many challenges ahead of us. My desire is that we face those challenges together in a collaborative and consultative way,” Watson wrote. “With precision and a firm course based on care and safety, financial liquidity, student and personnel care, and operational continuity, UW-Whitewater will come through this on the other side.”

Watson also addressed a handful of other changes within the university: 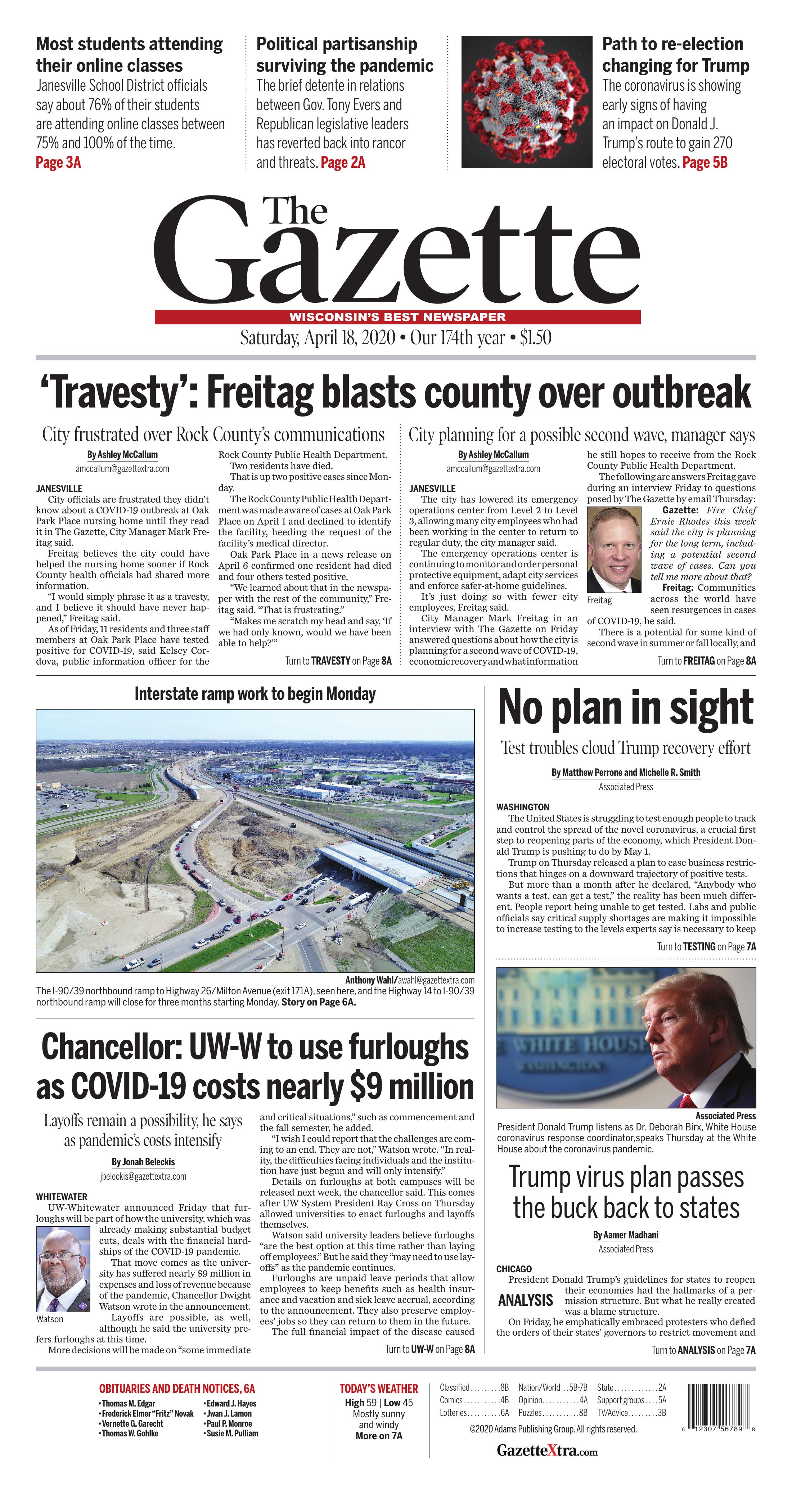