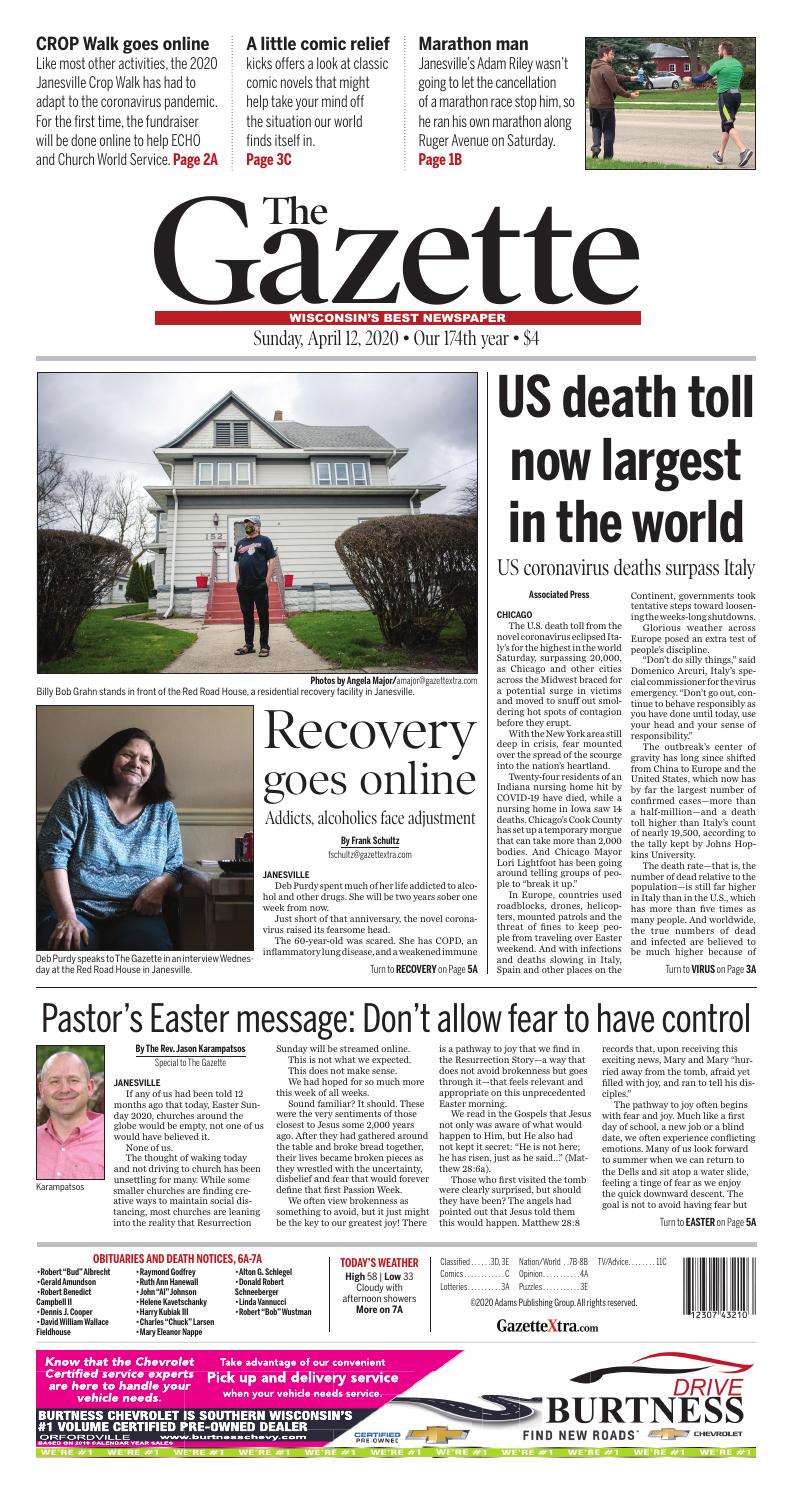 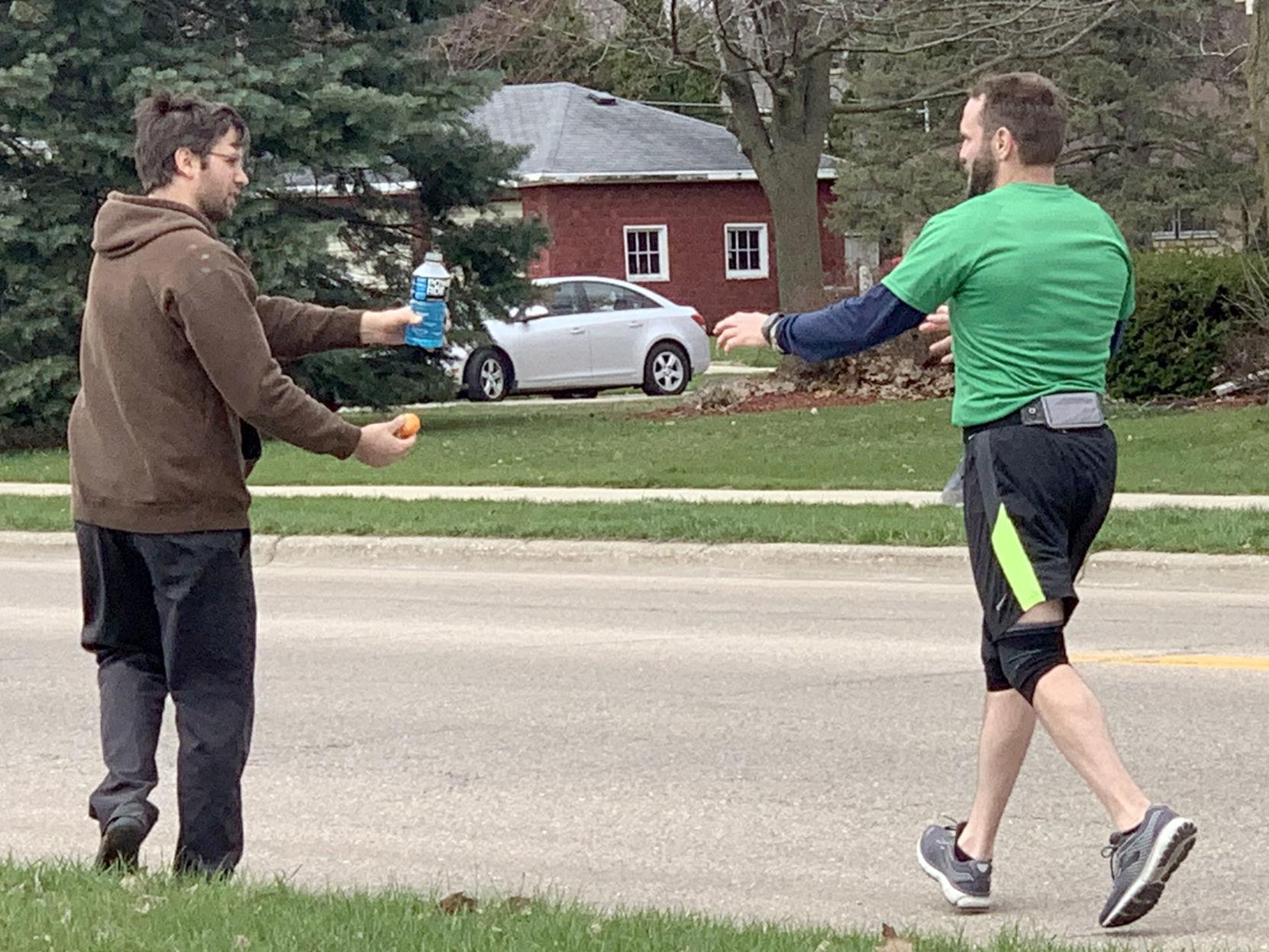 Janesville’s Adam Riley, right, reaches out for a swig of Powerade being handed to him by his friend and business partner, Jake Bussie. Riley ran 26.2 miles up and down Ruger Avenue on Saturday, April 11, 2020, to complete his “virtual” version of the Milwaukee Marathon, which was canceled due to the coronavirus pandemic.

Deb Purdy speaks to the Gazette in an interview Wednesday, April 8, 2020, at the Red Road House in Janesville.

Deb Purdy holds motivational ‘vision boards’ she made as one way of passing the time during the safer-at-home restrictions at the Red Road House in Janesville.

Deb Purdy spent much of her life addicted to alcohol and other drugs. She will be two years sober one week from now.

Just short of that anniversary, the novel coronavirus raised its fearsome head.

The 60-year-old was scared. She has COPD, an inflammatory lung disease, and a weakened immune system that could team up with COVID-19 and kill her.

But she knows, like many addicts and alcoholics, that she must attend 12-step meetings regularly.

If she doesn’t, “You feel like something’s missing,” she said.

Purdy said meetings give her support of people who are like a big family.

Gov. Tony Evers’ order on March 25 included a prohibition on meetings of more than 10 people and threatened those meetings.

Many of the regular meetings in south-central Wisconsin shut down. Some continued, but people kept their distance, and some wore masks, Purdy recalled.

Regular meetings are lifelines for people trying to hang on to their recovery from addiction.

It wasn’t too long before the recovery community figured out the Zoom meetings app would allow meetings to continue online.

Purdy, 60, and many others who didn’t grow up with this kind of technology have adapted.

“When I started doing the meetings online, I told them how I felt (about her fears for her health). You talk about whatever is bothering you, and nobody cuts you down for it or anything,” she said.

Purdy lives at the Red Road House, a residential facility for recovering addicts and alcoholics in Janesville.

Billy Bob Grahn, a recovering alcoholic and drug addict himself, is the house’s founder.

Grahn said younger residents in the house have helped him go to meetings online.

“I am the worst computer person in the world, and they taught me about Zoom,” the video-conferencing app often used for 12-step meetings, he said.

Grahn said something about being cooped up during this crisis has led to changes among those who live in the house. They are long-term, chronic addicts or alcoholics, but now they reaching out to their loved ones more than before, and they are helping each other more.

“It’s a closing of the ranks; we’ve got to stick together on this one, and that’s rewarding to see,” Grahn said.

Like everybody, Purdy is trying to keep busy. She goes for walks and does art projects with one of her Red Road House buddies. They are creating on hearts to put in the windows.

But she feels the fear of what the virus could do to her.

“I try not to watch the news,” she said. “I listen to music.” Gospel songs are her favorite. And she attends meetings online—five or six a week—just like when she attended them in person.

Mike R of Badgerland Narcotics Anonymous, which covers much of south-central Wisconsin, said the closing of so many meetings left a gap, and he worried about how people who are coming out of treatment or just deciding to get sober were going to find meetings.

“In the beginning, there were tears. There were fears. There was disbelief, you know, ‘What can we do now?’” he said.

But some NA members in the Madison area got together early in the crisis and set up online meetings, Mike said. He emphasized he was speaking from his own experience, and that one person can’t represent the Narcotics Anonymous fellowship as a whole.

Mike said even people with no computer skills have found their way into virtual meetings.

“The more people do it, the more comfortable it is,” Mike said, adding people do miss the closeness of an in-person meeting, when hugs at the end are common.

Humans need the human touch, and virtual-meeting participants do the best they can with the technology, inviting those who log on to read or share their experiences.

“We let them know, ‘We love you and care about you,’ and maybe get a response,” Mike said.

At some point, the in-person meetings will return, but Mike thinks virtual meetings are so convenient they will become a part of the lives of many in recovery.

“And now there is strength and beauty and resolve to get through this crisis, and it’s making a big difference to a lot of addicts,” he said.

Even so, Mike added, “I know we miss the hugs.”

Coronavirus
Pastor: ‘Avoid fear having control’
By The Rev. Jason Karampatsos Special to The Gazette
04.12.20

Easter Jesus Christ rose from the dead. Sunday morning. Dawn. The empty tomb in the background of the crucifixion. Happy easter. Christian symbol of faith, art illustration painted with watercolors

If any of us had been told 12 months ago that today, Easter Sunday 2020, churches around the globe would be empty, not one of us would have believed it.

The thought of waking today and not driving to church has been unsettling for many. While some smaller churches are finding creative ways to maintain social distancing, most churches are leaning into the reality that Resurrection Sunday will be streamed online.

This is not what we expected.

This does not make sense.

We had hoped for so much more this week of all weeks.

Sound familiar? It should. These were the very sentiments of those closest to Jesus some 2,000 years ago. After they had gathered around the table and broke bread together, their lives became broken pieces as they wrestled with the uncertainty, disbelief and fear that would forever define that first Passion Week.

We often view brokenness as something to avoid, but it just might be the key to our greatest joy! There is a pathway to joy that we find in the Resurrection Story—a way that does not avoid brokenness but goes through it—that feels relevant and appropriate on this unprecedented Easter morning.

We read in the Gospels that Jesus not only was aware of what would happen to Him, but He also had not kept it secret: “He is not here; he has risen, just as he said…” (Matthew 28:6a).

Those who first visited the tomb were clearly surprised, but should they have been? The angels had pointed out that Jesus told them this would happen. Matthew 28:8 records that, upon receiving this exciting news, Mary and Mary “hurried away from the tomb, afraid yet filled with joy, and ran to tell his disciples.”

The pathway to joy often begins with fear and joy. Much like a first day of school, a new job or a blind date, we often experience conflicting emotions. Many of us look forward to summer when we can return to the Dells and sit atop a water slide, feeling a tinge of fear as we enjoy the quick downward descent. The goal is not to avoid having fear but to avoid fear having control.

His followers couldn’t make sense of what Jesus had told them, and that left the door open to fear even as they experienced joy. When Jesus appeared to them, first on the road to Emmaus and then to the Disciples assembled behind a locked door, “... he showed them his hands and feet. And while they still did not believe it because of joy and amazement ...” (Luke 24:40b-41a).

The pathway to joy must overcome disbelief. Disbelief was the root of Mary’s fear, and even with proof, the Disciples still had fear because they did not believe.

Stimulus checks are trickling in, unemployment payments are coming through, and in some areas, we have seen the curve flattened, but do we believe what Jesus has already told us? “I have told you these things, so that in me you may have peace. In this world you will have trouble. But take heart! I have overcome the world” (John 16:33).

The Disciples and those at the tomb did not believe, and Jesus responded to them, “... This is what I told you while I was still with you: Everything must be fulfilled that is written about me in the Law of Moses, the Prophets and the Psalms” (Luke 24:44).

Jesus had told every one of them what would happen—what needed to happen—and yet they did not believe. This is a morning to believe! This is a morning to rejoice, to celebrate! We may not be able to assemble under one roof, but this morning we celebrate that the tomb was as empty as our church buildings are today!

Finally, the pathway to joy required His brokenness: “After he said this, he showed them his hands and side. The disciples were overjoyed when they saw the LORD” (John 20:20).

The Rev. Jason Karampatsos is lead pastor at New Life Assembly of God church in Janesville. 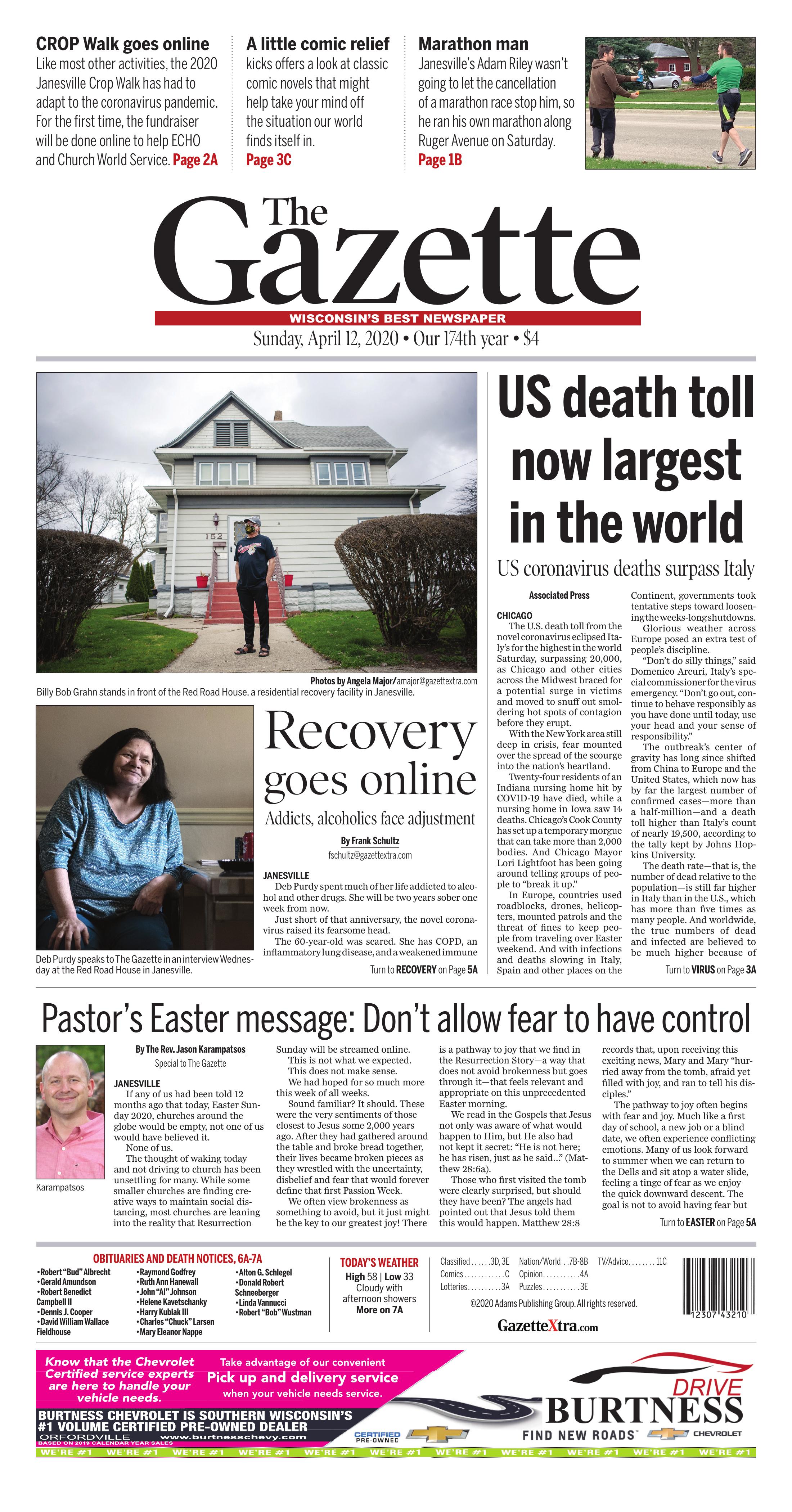