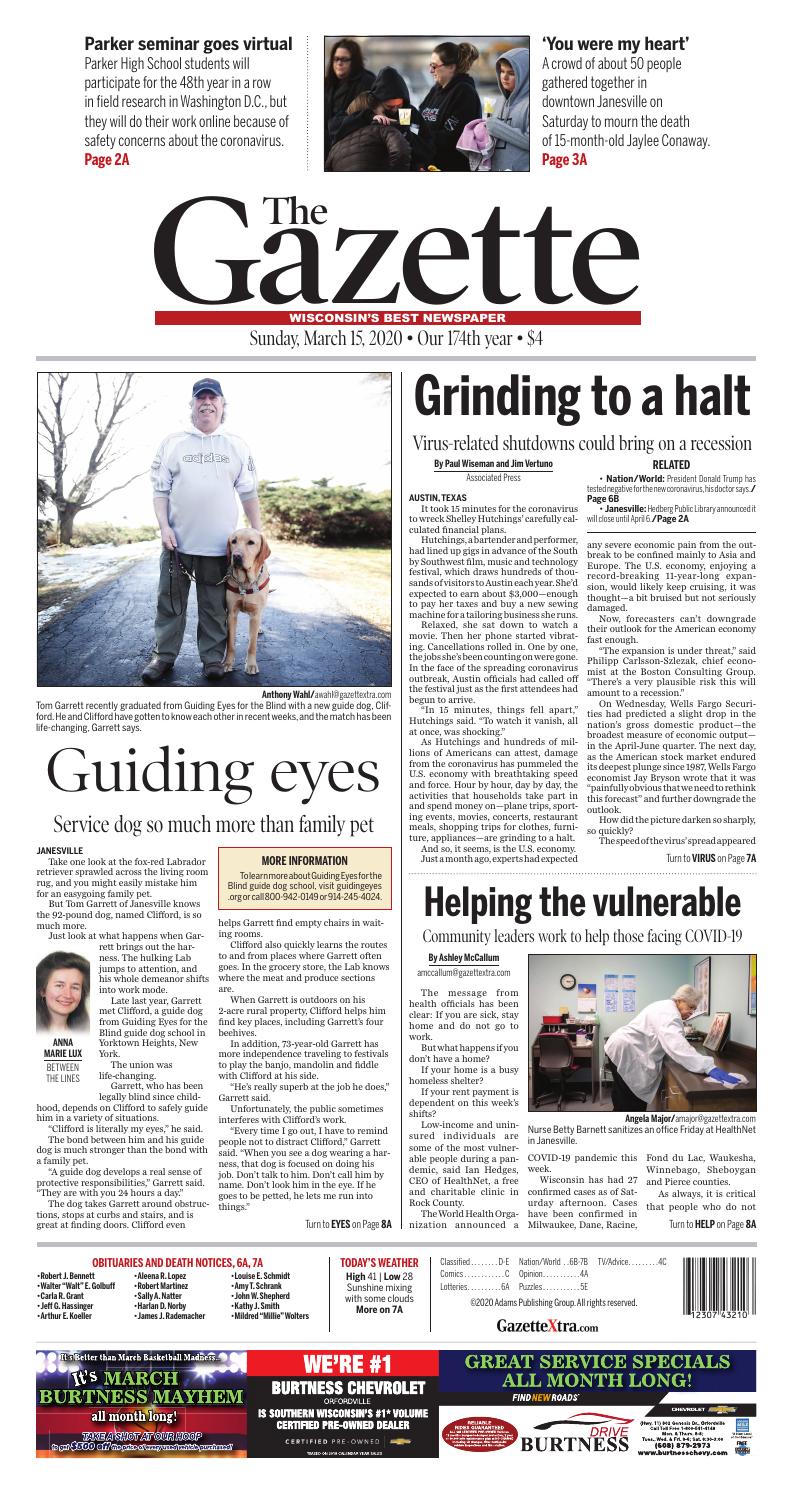 Tom Garrett recently graduated from Guiding Eyes for the Blind with a new guide dog, Clifford. He and Clifford have gotten to know each other in recent weeks, and the match has been life-changing, Garrett says.

Tom Garrett’s new guide dog, Clifford, helps him in various ways, taking him around obstructions, stopping at curbs and stairs, finding doors and even locating an empty chair in a waiting room.

Take one look at the fox-red Labrador retriever sprawled across the living room rug, and you might easily mistake him for an easygoing family pet.

But Tom Garrett of Janesville knows the 92-pound dog, named Clifford, is so much more.

Just look at what happens when Garrett brings out the harness. The hulking Lab jumps to attention, and his whole demeanor shifts into work mode.

The union was life-changing.

Garrett, who has been legally blind since childhood, depends on Clifford to safely guide him in a variety of situations.

“Clifford is literally my eyes,” he said.

The bond between him and his guide dog is much stronger than the bond with a family pet.

“A guide dog develops a real sense of protective responsibilities,” Garrett said. “They are with you 24 hours a day.”

The dog takes Garrett around obstructions, stops at curbs and stairs, and is great at finding doors. Clifford even helps Garrett find empty chairs in waiting rooms.

Clifford also quickly learns the routes to and from places where Garrett often goes. In the grocery store, the Lab knows where the meat and produce sections are.

When Garrett is outdoors on his 2-acre rural property, Clifford helps him find key places, including Garrett’s four beehives.

In addition, 73-year-old Garrett has more independence traveling to festivals to play the banjo, mandolin and fiddle with Clifford at his side.

“He’s really superb at the job he does,” Garrett said.

“Every time I go out, I have to remind people not to distract Clifford,” Garrett said. “When you see a dog wearing a harness, that dog is focused on doing his job. Don’t talk to him. Don’t call him by name. Don’t look him in the eye. If he goes to be petted, he lets me run into things.”

People are more understanding of service dogs than they used to be, and many legitimate service dogs help people with diabetes, post-traumatic stress disorder and hearing impairment.

But Garrett said the law does not recognize “comfort” or “emotional support” dogs as legal service dogs.

Prior to 2012, Garrett used a white cane to help him navigate in the world.

When he learned about the Guiding Eyes school and its highly trained dogs, he applied for his first dog.

The nonprofit school, which provides all services free, matched Garrett with a yellow Lab named J.J.

When the dog died at age 9, Garrett was devastated.

He applied to the school for a second guide dog and asked for “a big, robust and rowdy yellow Lab.”

From the beginning, both were smitten.

The first time Garrett took Clifford for play time, the two bonded right away, even though Clifford’s trainer came along.

Garrett stayed at the Guiding Eyes school for three weeks and worked with Clifford every day until they became a team.

The school’s mission is to create and support life-changing connections between people and dogs. It relies almost entirely on donations from individuals, corporations and foundations to do its work.

The school’s guide dogs are known for their exceptional temperaments and success at helping people gain independence, according to materials from the school.

One guide dog team costs about $50,000 to breed, raise, train, match and support over the lifetime of the team’s work together.

Most guide dogs are Labrador retrievers, but a few are German shepherds. They spend six to 12 months undergoing formal training with a professional instructor.

Dogs are then carefully matched with handlers based on how fast the handler walks, how hard the dog pulls and their personalities.

Garrett couldn’t be happier with his matches.

“Clifford has the genes and the temperament to be the kind of guide dog you want,” Garrett said. “He is focused on doing his job.”

As the bond between the two intensifies, Clifford becomes more committed to Garrett.

Clifford will need several months to adjust to his new home with Garrett and his wife, Nancy.

“It’s a huge change to go from the trainer to an entirely new place,” Garrett said. “He’s been home since December, but the bonding process goes on.”

He looks forward to taking Clifford to a gathering of a fur-trade reenactment group that Garrett has belonged to for 30 years.

“It used to be J.J.’s favorite thing in the world to do,” Garrett said. “He got to visit other campers and stayed in the teepee. He also quickly learned where our camp was and could take me there.”

The message from health officials has been clear: If you are sick, stay home and do not go to work.

But what happens if you don’t have a home?

If your home is a busy homeless shelter?

If your rent payment is dependent on this week’s shifts?

Low-income and uninsured individuals are some of the most vulnerable people during a pandemic, said Ian Hedges, CEO of HealthNet, a free and charitable clinic in Rock County.

The World Health Organization announced a COVID-19 pandemic this week.

Wisconsin has had 27 confirmed cases as of Saturday afternoon. Cases have been confirmed in Milwaukee, Dane, Racine, Fond du Lac, Waukesha, Winnebago, Sheboygan and Pierce counties.

As always, it is critical that people who do not have a place to live find a safe place to stay, said Stephanie Burton, director of GIFTS Men’s Shelter.

Precautionary steps are being taken to make sure shelters remain safe for residents, volunteers and staff, Burton said.

In a statement, Tammie King-Johnson, manager of the House of Mercy, said there have been no cases of COVID-19 in homelessness individuals yet across the country.

“We are concerned that people who already lack ready access to hygiene facilities, a safe home and, in some cases, adequate health care will be especially vulnerable to complications from the spread of the virus,” King-Johnson said. 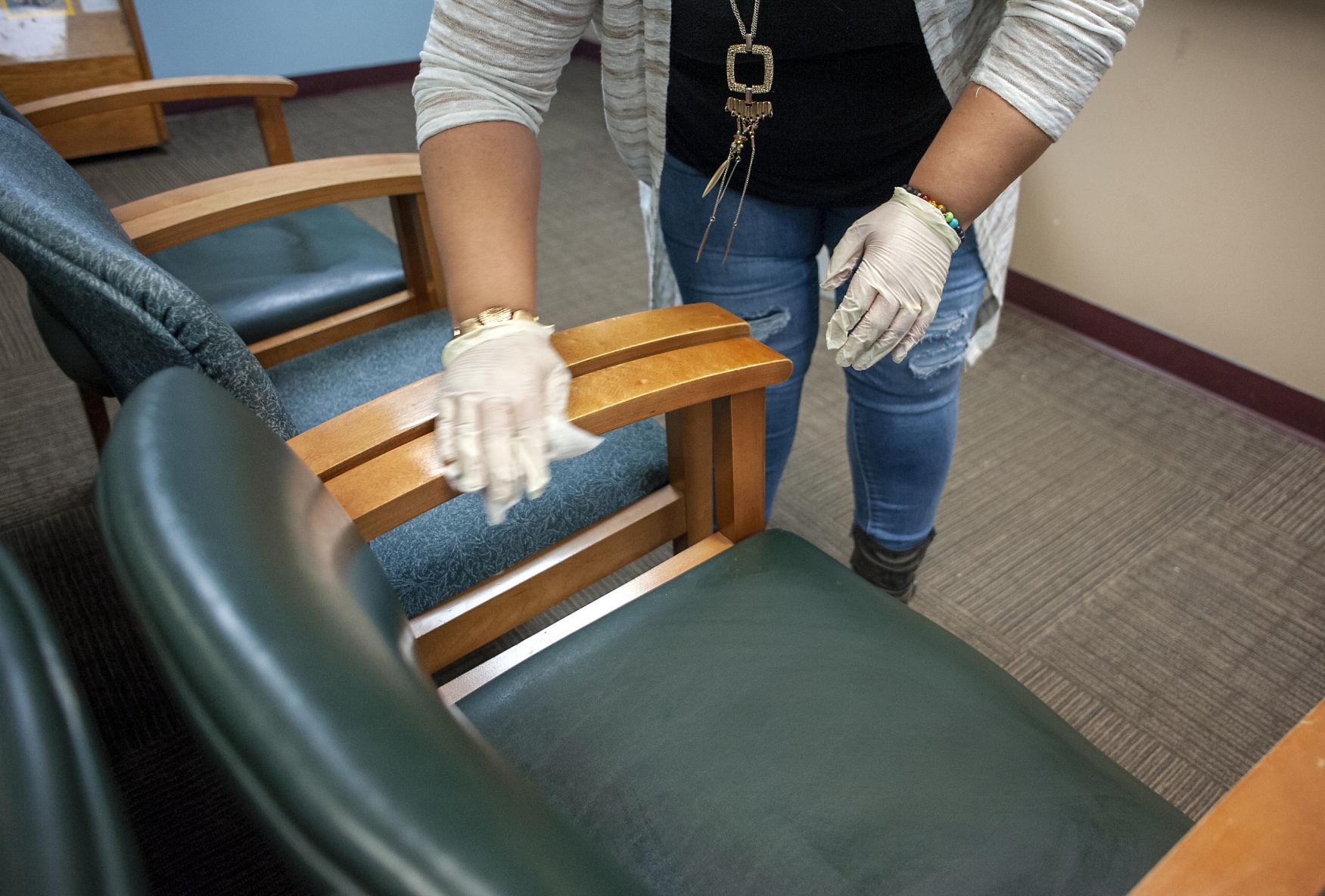 Marc Perry, interim deputy director of Community Action of Rock and Walworth County, said he is most concerned for people who are temporarily or situationally homeless.

People who are chronically homeless are likely to stay in one place and not come in contact with many people, Perry said.

People who are in between housing situations, living in their cars or newly homeless are likely to visit many organizations to receive services, which would make them more likely to pick up and spread the virus, Perry said.

HealthNet, Community Action, GIFTS and House of Mercy are following guidelines from the Centers of Disease Control and Prevention on cleaning, hand washing and social distancing.

GIFTS has added more screening questions to its intake process to determine whether a patient could be carrying the coronavirus. The shelter has also cancelled its volunteer programs to ensure volunteer safety, Burton said.

Burton and other staff are working out procedures for if a client needs to be tested or has become sick. As of now, GIFTS does not have the space to quarantine, she said.

The House of Mercy has prohibited visitors and will screen personnel before entering the building, King-Johnson said.

HealthNet and Community Action are working with clients who are low-income to encourage them to seek out health care or self-quarantine when they are sick.

HealthNet does not have the ability to test for COVID-19, meaning the clinic’s uninsured and low-income patients have to go to a hospital or medical facility to be tested.

“We really try to coach them (patients) through that,” Hedges said. “... we recommend you go to a hospital, absolutely, but if you are not going to do that, you absolutely need to stay home.”

HealthNet is planning protocols for how to get patients their medications if there is an outbreak in Rock County. The clinic would decide with the patients who is a safe and reliable person to pick up their medications, Hedges said. 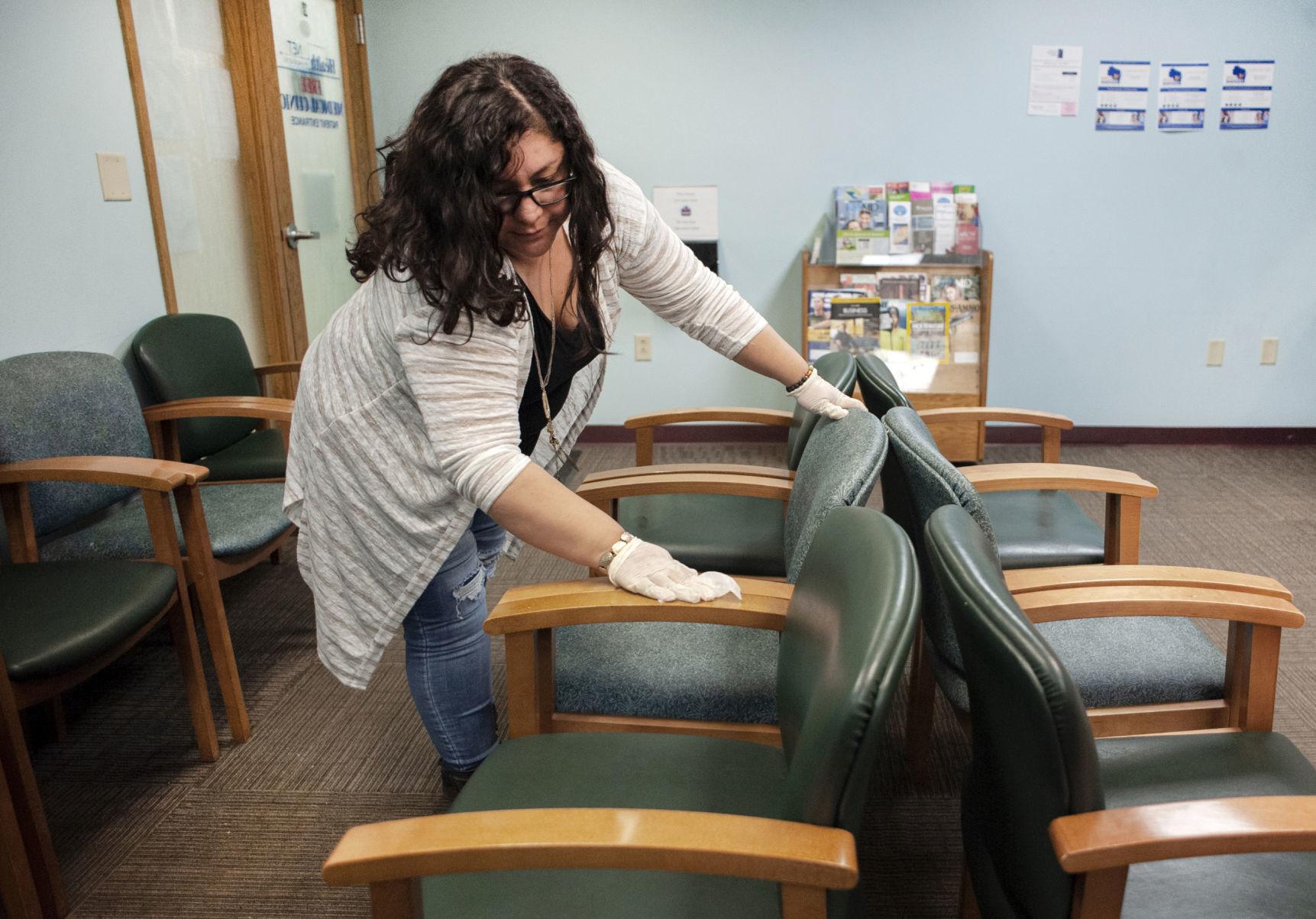 One of the biggest reasons low-income individuals are at risk is because many people feel they cannot afford to miss work to be quarantined, Hedges said.

“We are trying to be sensitive of that with our patients and have conversations about what their rights are if they need quarantine,” Hedges said.

Patients need to be aware that going to work while sick might be more expensive for them down the road, Hedges said.

State Sen. Janis Ringhand, D-Evansville, on Friday announced she is urging Republican lawmakers to pass the Family Medical Leave Insurance Act, which would make employees eligible to receive a percentage of their pay during family or medical leave at no cost to employers.

Employees would pay a percentage of their checks each week into a trust fund and receive compensation from the trust fund when needed, according to the release.

“Sick leave is really imperative in this equation,” Hedges said.

For more local coverage on the outbreak of the new coronavirus, go to gazette xtra.com/coronavirus.

Health officials offer these tips for preventing the spread of COVID-19 and other diseases:

Mercyhealth System and SSM Health urge people presenting symptoms of respiratory illness to reach out to medical professionals for help.

People who believe they have symptoms of COVID-19 are asked to call the health care facility before visiting so staff can take precautions.

Below is contact information for Mercyhealth and SSM Health: 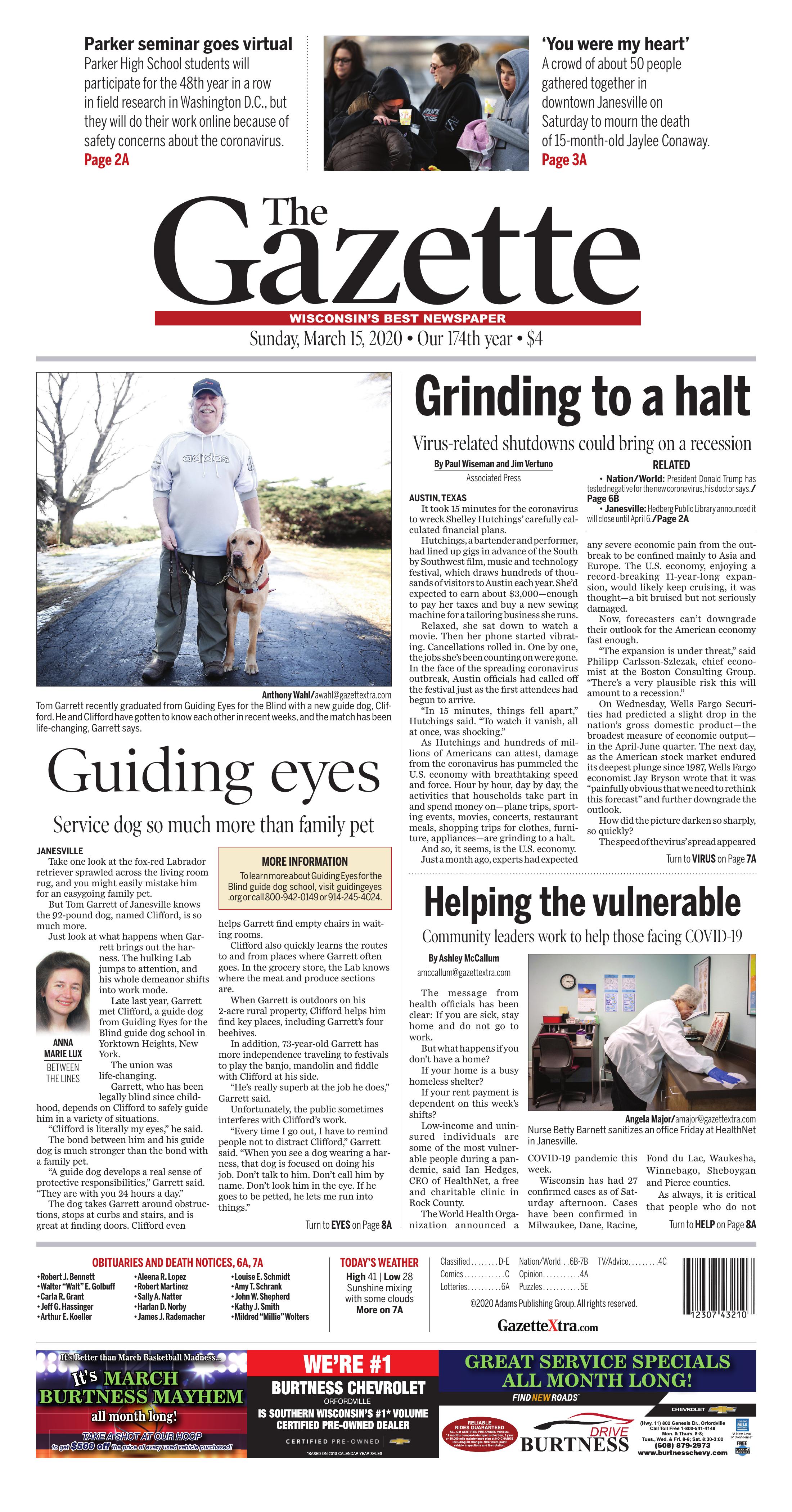