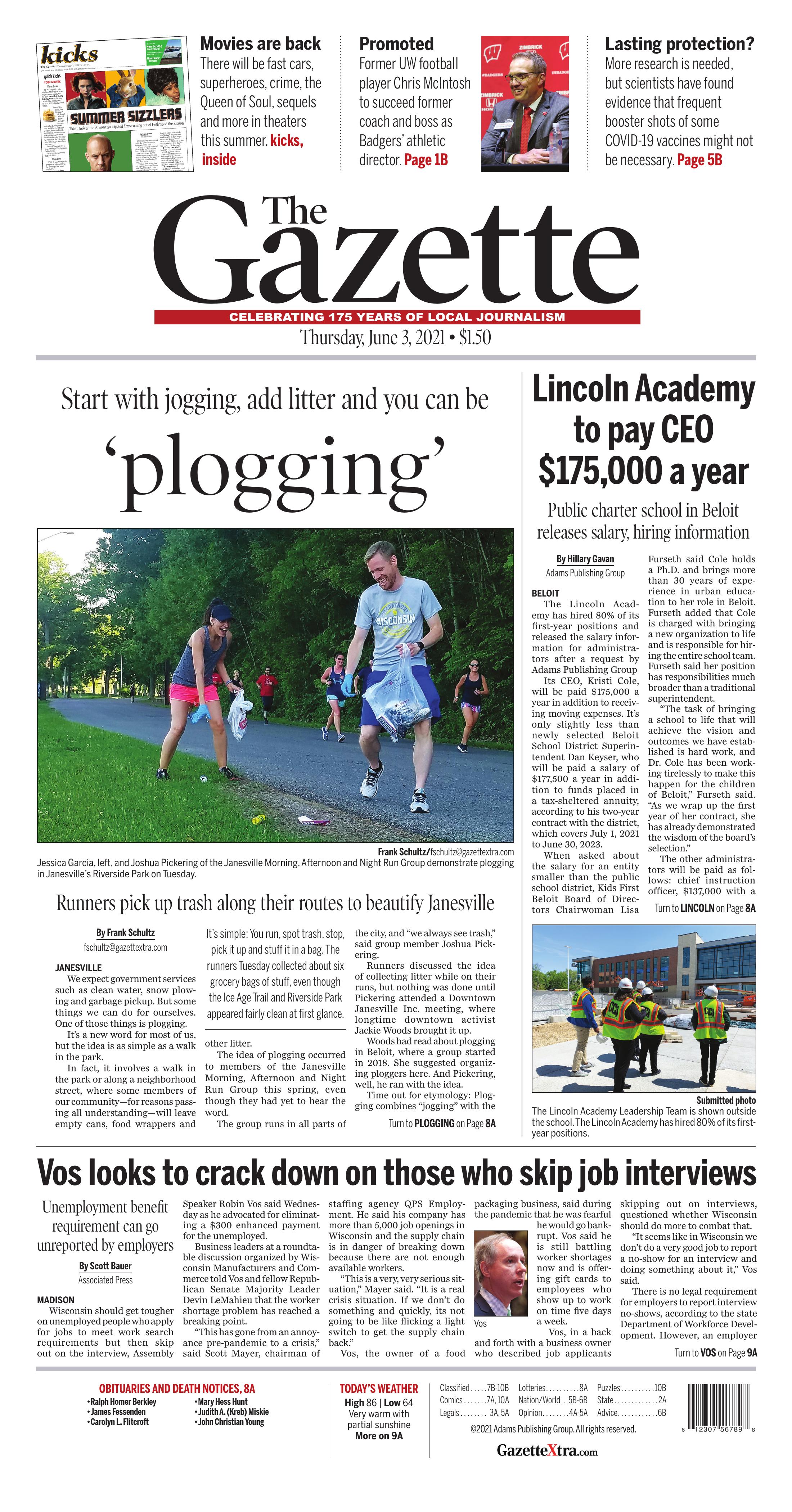 We expect government services such as clean water, snow plowing and garbage pickup. But some things we can do for ourselves. One of those things is plogging.

It’s a new word for most of us, but the idea is as simple as a walk in the park.

In fact, it involves a walk in the park or along a neighborhood street, where some members of our community—for reasons passing all understanding—will leave empty cans, food wrappers and other litter.

The idea of plogging occurred to members of the Janesville Morning, Afternoon and Night Run Group this spring, even though they had yet to hear the word.

The group runs in all parts of the city, and “we always see trash,” said group member Joshua Pickering.

Runners discussed the idea of collecting litter while on their runs, but nothing was done until Pickering attended a Downtown Janesville Inc. meeting, where longtime downtown activist Jackie Woods brought it up.

Woods had read about plogging in Beloit, where a group started in 2018. She suggested organizing ploggers here. And Pickering, well, he ran with the idea.

Time out for etymology: Plogging combines “jogging” with the Swedish phrase “plocka upp,” which means to pick up.

On Tuesday, members of the running group met at The Looking Glass tavern downtown and ran the Ice Age Trail out to the end of Riverside Park and back.

Several members ran with plastic shopping bags in hand and plogged along the way.

Again, it’s simple: You run, spot trash, stop, pick it up and stuff it in a bag. The runners collected about six grocery bags of stuff, even though the trail and park appeared fairly clean at first glance.

One thing they learned: One person can’t see all the trash. In places where one runner scooped some up, another runner came along later and found more.

They hope to make this a Janesville thing. Pickering has set up a Janesville event next Monday through Friday to get as many city residents as possible involved. The Facebook event page is called Plogging in the 608, which connects with the fact that Tuesday is 608 Day (June 8 is 6/08, and 608 is our phone area code.).

And anyone can do it. Running is not an essential part of it, at least as far as the Janesville version of plogging goes.

“You can walk. You can crawl if you need to,” Pickering said.

“If everyone did just one grocery bag, think of how much trash would be picked up,” Pickering said. “If everybody would do their own neighborhoods, a lot could get done.”

The event will feature no prizes, no music, no snacks or speeches. Just the satisfaction of making things a little bit better.

And if you want to follow the example of a certain local running group and rendezvous with friends afterwards at a local pub, well, there’s nothing stopping you.

Wisconsin should get tougher on unemployed people who apply for jobs to meet work search requirements but then skip out on the interview, Assembly Speaker Robin Vos said Wednesday as he advocated for eliminating a $300 enhanced payment for the unemployed.

“This has gone from an annoyance pre-pandemic to a crisis,” said Scott Mayer, chairman of staffing agency QPS Employment. He said his company has more than 5,000 job openings in Wisconsin and the supply chain is in danger of breaking down because there are not enough available workers.

“This is a very, very serious situation,” Mayer said. “It is a real crisis situation. If we don’t do something and quickly, its not going to be like flicking a light switch to get the supply chain back.”

Vos, the owner of a food packaging business, said during the pandemic that he was fearful he would go bankrupt. Vos said he is still battling worker shortages now and is offering gift cards to employees who show up to work on time five days a week.

Vos, in a back and forth with a business owner who described job applicants skipping out on interviews, questioned whether Wisconsin should do more to combat that.

“It seems like in Wisconsin we don’t do a very good job to report a no-show for an interview and doing something about it,” Vos said.

There is no legal requirement for employers to report interview no-shows, according to the state Department of Workforce Development. However, an employer can report when someone refuses a job, which can be used by the state to deny unemployment benefits.

“I would love to work with the administration and the department to figure out a more rigorous way to say, ‘Hey, if you schedule an interview, you need to show up or you lose your unemployment,’” Vos said after the event. “That’s not the current process.”

Republican legislative leaders, along with the state chamber of commerce, trade groups and local economic development groups, are advocating for the state Legislature to repeal a $300 unemployment supplement and other enhancement programs enacted during the coronavirus pandemic.

Wisconsin Republicans last month reinstated a work search requirement for the unemployed, a move designed to get more people back into the workforce. The Assembly was scheduled to vote next week on a bill ending the $300 payment and other federal enhancement programs.

Evers, a Democrat, is likely to veto the measure. He voiced support for the $300 payment Tuesday, saying those who advocate abolishing it don’t have any evidence that it’s behind the worker shortage problem.

“It’s an issue I have seen no data on—none whatsoever,” Evers said. “In addition, we had trouble finding people to come to work before the pandemic, during the pandemic and after the pandemic, so I think this is an issue around making sure we have the best quality of life in the state of Wisconsin so we actually encourage people to move here—I think those are things we need to take a look at. But I am concerned we are seeking a solution to a problem that may not exist.”

Business leaders said removing the $300 supplement is a start but that the worker shortage issue is more complex. Labor experts agree that several factors feed into the shortage, which existed before the pandemic but has come into sharper focus since.

Some unemployed people have been reluctant to return to work because they fear catching the virus. Others have found new occupations. And many women, especially working mothers, have left the workforce to care for their children.

Steve Loehr, vice president of Kwik Trip, said the company was looking to hire 3,000 people in Wisconsin this year. One move Kwik Trip made to retain workers was to open a day care center at its packaging facility in La Crosse, he said.

Obituaries and death notices for June 3, 2021

Its CEO, Kristi Cole, will be paid $175,000 a year in addition to receiving moving expenses. It’s only slightly less than newly selected Beloit School District Superintendent Dan Keyser, who will be paid a salary of $177,500 a year in addition to funds placed in a tax-sheltered annuity, according to his two-year contract with the district, which covers July 1, 2021 to June 30, 2023.

When asked about the salary for an entity smaller than the public school district, Kids First Beloit Board of Directors Chairwoman Lisa Furseth said Cole holds a Ph.D. and brings more than 30 years of experience in urban education to her role in Beloit. Furseth added that Cole is charged with bringing a new organization to life and is responsible for hiring the entire school team. Furseth said her position has responsibilities much broader than a traditional superintendent.

“The task of bringing a school to life that will achieve the vision and outcomes we have established is hard work, and Dr. Cole has been working tirelessly to make this happen for the children of Beloit,” Furseth said. “As we wrap up the first year of her contract, she has already demonstrated the wisdom of the board’s selection.”

The director of career planning and partnerships will receive a salary of $75,000 plus $8,000 for tuition reimbursement and an additional $4,000 for being released from a previous district’s contract as the person was hired in August.

Furseth said compensation rates both locally and regionally have been taken into account in order to ensure salaries are competitive.

Staff is not eligible to participate in the Wisconsin Retirement System, so the school has a 401(k) retirement plan for staff that includes an employer match.

“We don’t offer a pension plan, but we have a retirement savings plan,” Furseth said.

The initial teacher salary plan is based on educational background and years of experience, including industry experience where applicable. Teaching staff will receive step increases annually. The school has also incorporated bonuses up to 10%, and teachers, administrators and support staff will be eligible for those bonuses. The bonus would include meeting individual and school-wide expectations such as attendance and academic contract goals.

The plan also includes incentives for longevity milestones, such as three, five, seven and 10 years of employment.

“We really want the entire school team focused on the academic performance and development of students and have a structured compensation to reflect those priorities,” Furseth said.

When asked if the school would be adding a communications and marketing position, Furseth said there is not one budgeted at this time.

“We are still assessing what our needs will be in that regard. The director of scholar services will have primary responsibility for communication with families, and that is our highest priority,” Furseth said.