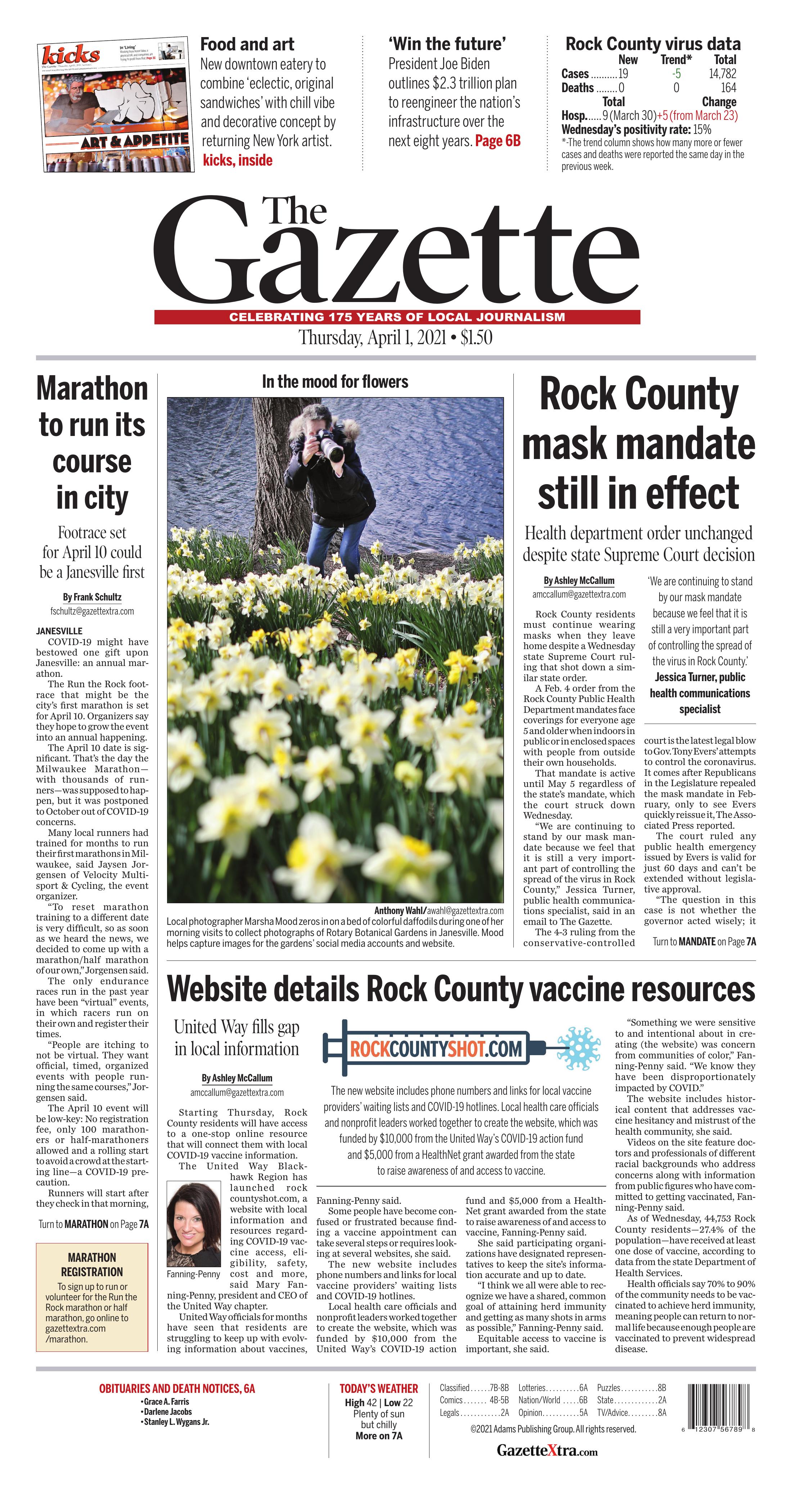 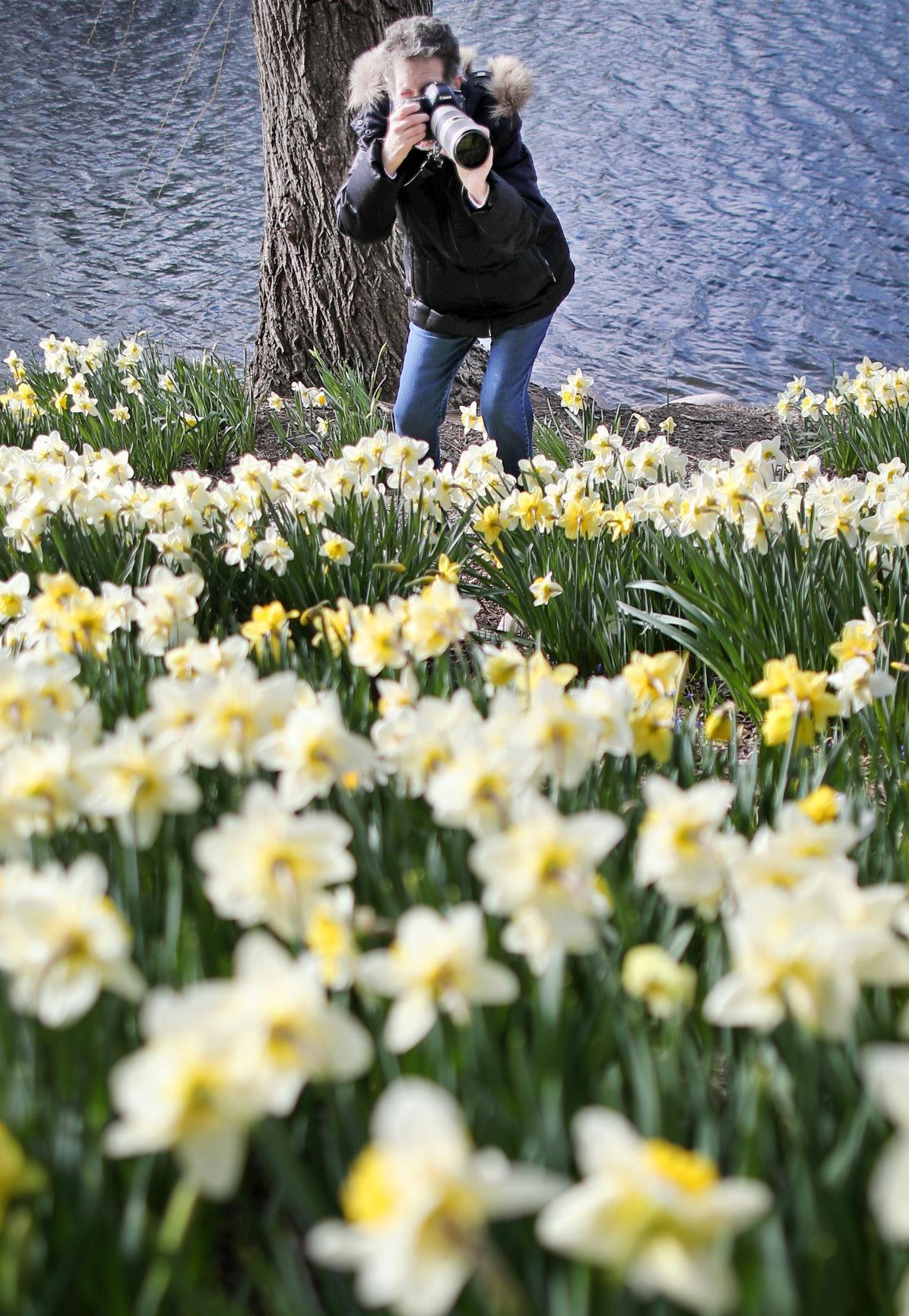 Local photographer Marsha Mood zeros in on a bed of colorful daffodils during one of her morning visits to collect photographs of Rotary Botanical Gardens in Janesville. Mood helps capture images for the gardens’ social media accounts and website.

Starting Thursday, Rock County residents will have access to a one-stop online resource that will connect them with local COVID-19 vaccine information.

United Way officials for months have seen that residents are struggling to keep up with evolving information about vaccines, Fanning-Penny said.

Some people have become confused or frustrated because finding a vaccine appointment can take several steps or requires looking at several websites, she said.

Local health care officials and nonprofit leaders worked together to create the website, which was funded by $10,000 from the United Way’s COVID-19 action fund and $5,000 from a HealthNet grant awarded from the state to raise awareness of and access to vaccine, Fanning-Penny said.

She said participating organizations have designated representatives to keep the site’s information accurate and up to date.

“I think we all were able to recognize we have a shared, common goal of attaining herd immunity and getting as many shots in arms as possible,” Fanning-Penny said.

“Something we were sensitive to and intentional about in creating (the website) was concern from communities of color,” Fanning-Penny said. “We know they have been disproportionately impacted by COVID.”

The website includes historical content that addresses vaccine hesitancy and mistrust of the health community, she said.

Videos on the site feature doctors and professionals of different racial backgrounds who address concerns along with information from public figures who have committed to getting vaccinated, Fanning-Penny said.

As of Wednesday, 44,753 Rock County residents—27.4% of the population—have received at least one dose of vaccine, according to data from the state Department of Health Services.

Health officials say 70% to 90% of the community needs to be vaccinated to achieve herd immunity, meaning people can return to normal life because enough people are vaccinated to prevent widespread disease.

Obituaries and death notices for April 1, 2021

A man wears a mask as he walks past an American flag mural in downtown Janesville.

Rock County residents must continue wearing masks when they leave home despite a Wednesday state Supreme Court ruling that shot down a similar state order.

A Feb. 4 order from the Rock County Public Health Department mandates face coverings for everyone age 5 and older when indoors in public or in enclosed spaces with people from outside their own households.

That mandate is active until May 5 regardless of the state’s mandate, which the court struck down Wednesday.

“We are continuing to stand by our mask mandate because we feel that it is still a very important part of controlling the spread of the virus in Rock County,” Jessica Turner, public health communications specialist, said in an email to The Gazette.

The 4-3 ruling from the conservative-controlled court is the latest legal blow to Gov. Tony Evers’ attempts to control the coronavirus. It comes after Republicans in the Legislature repealed the mask mandate in February, only to see Evers quickly reissue it, The Associated Press reported.

The court ruled any public health emergency issued by Evers is valid for just 60 days and can’t be extended without legislative approval.

“The question in this case is not whether the governor acted wisely; it is whether he acted lawfully. We conclude he did not,” Justice Brian Hagedorn wrote for the majority.

Justice Ann Walsh Bradley, a member of the court’s three-justice minority, lamented in a dissent that the ruling hampers the ability of Wisconsin governors to protect lives.

Rock County health officials have been persistent in encouraging people to continue wearing masks, social distancing and avoiding crowds to prevent another surge of coronavirus cases.

COVID-19 vaccines have helped slow the spread of the disease, but the chance of infection and serious illness is a reality for those who are not vaccinated, health officials have said.

Officials nationwide have warned against relaxing safety guidelines too soon because many more people could die before the country reaches herd immunity.

“It is still very important for everyone to continue to wear masks in public, even after being vaccinated,” Turner said.

The Centers for Disease Control and Prevention says people who have been fully vaccinated, meaning two weeks have passed since they received two shots of Pfizer or Moderna vaccine or one shot of Johnson & Johnson vaccine, can be around other fully vaccinated people without wearing masks.

The Associated Press contributed to this story.

This photo of two runners was taken last March in Janesville, around the time the pandemic was declared, by Gazette photographer Anthony Wahl.

COVID-19 might have bestowed one gift upon Janesville: an annual marathon.

The Run the Rock footrace that might be the city’s first marathon is set for Saturday, April 10. Organizers say they hope to grow the event into an annual happening.

The April 10 date is significant. That’s the day the Milwaukee Marathon—with thousands of runners—was supposed to happen, but it was postponed to October out of COVID-19 concerns.

Many local runners had trained for months to run their first marathons in Milwaukee, said Jaysen Jorgensen of Velocity Multi-sport & Cycling, the event organizer.

“To reset marathon training to a different date is very difficult, so as soon as we heard the news, we decided to come up with a marathon/half marathon of our own,” Jorgensen said.

The only endurance races run in the past year have been “virtual” events, in which racers run on their own and register their times.

“People are itching to not be virtual. They want official, timed, organized events with people running the same courses,” Jorgensen said.

The April 10 event will be low-key: No registration fee, only 100 marathoners or half-marathoners allowed and a rolling start to avoid a crowd at the starting line—a COVID-19 precaution.

Runners will start after they check in that morning, marathoners starting at 7 a.m. and half-marathoners at 7:30.

Running bibs will contain magnetic chips that will allow runners to be tracked and clocked as they cross timing mats—a common practice.

The Gazette could not confirm this race is the first organized marathon in the city, but Jorgensen and others contacted could not recall another one.

The YMCA, Gazette and WCLO Radio sponsored a half marathon years ago, and that was the city’s premier running event, said former radio station manager and runner Mike O’Brien.

Jorgensen said about 45 local runners signed up when they were contacted about the race. Event registration was opened to the public Wednesday. As of Wednesday afternoon, 33 spots remained.

The starting and finish line will be in the parking lot of Velocity Multi-Sport & Cycling, 1327 N. Wright Road. All participants will receive finishing medals.Local running enthusiasts have chipped in to cover expenses, probably about $2,000, Jorgensen said.

Donations are still being accepted; see the “donate” button on the event website.

The city has approved the route and other details, Jorgensen said. Runners will head north on Wright Road to Rotamer Road and then south to Rockport Road near Monterey Park, avoiding stoplights. Volunteers will be stationed at crossings to keep an eye on traffic and to make sure runners follow the rules.

City Recreation Director Shelley Slapak said the route is mostly on east-side bike trails. No roads will be closed.

Runners will run along the sides of streets when they must; not on sidewalks.

The city required coronavirus safety measures such as distancing, face masks at check-in and for volunteers, making sure runners understand they must stay home if they have symptoms, etc., Slapak said.

“I’m encouraged that this could be an annual marathon in Janesville, and after COVID, the numbers could increase,” Slapak said. “It’s a great thing to bring people into our community.”

“This year, it’s really just designed to be fun and to work out the kinks,” Jorgensen said.

To sign up to run or volunteer for the Run the Rock marathon/half marathon, go online to gazettextra.com/marathon.