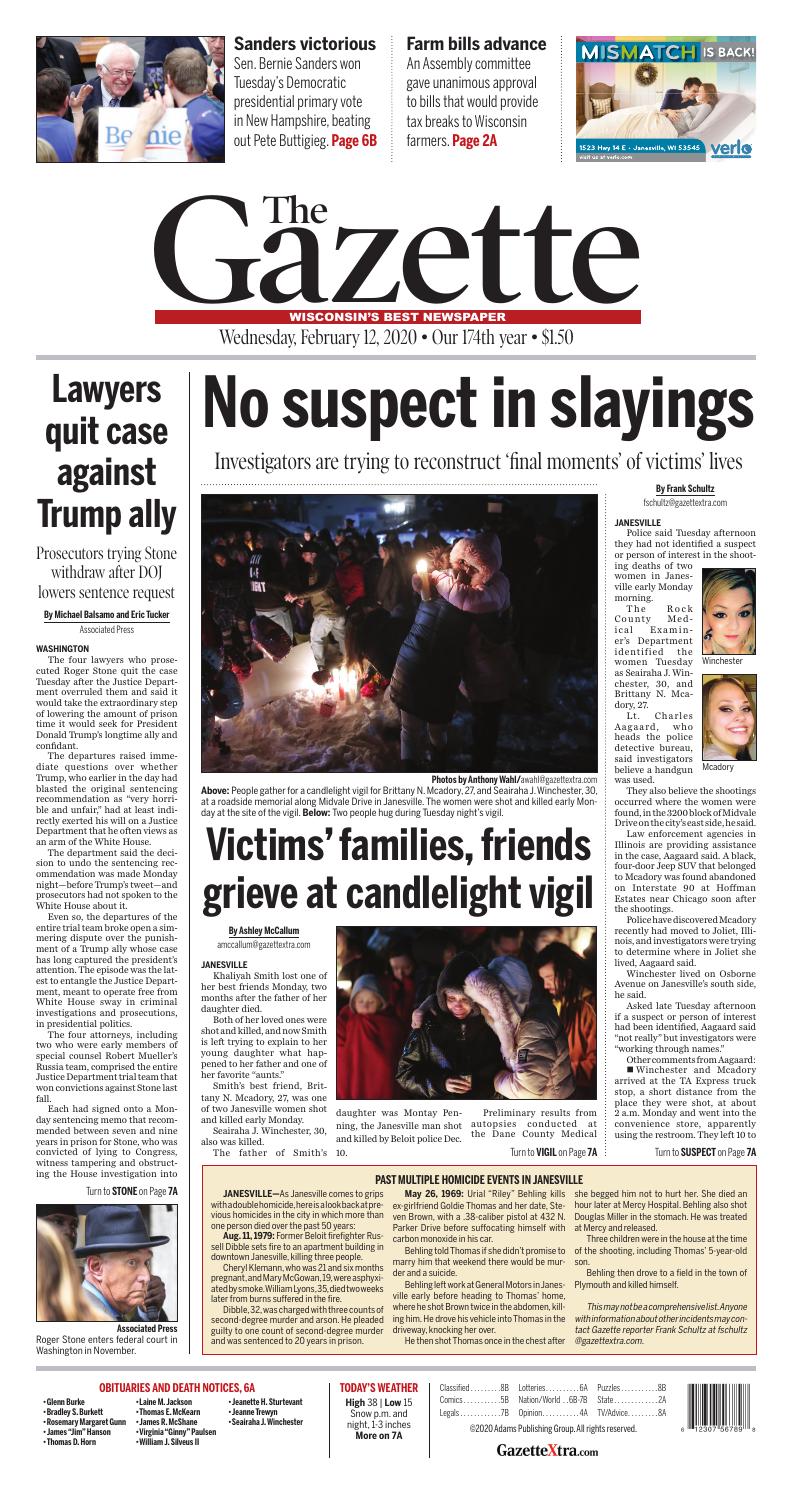 Janesville police search a parking a lot across from where two women were shot and killed near Midvale and Deerfield drives early Monday morning. 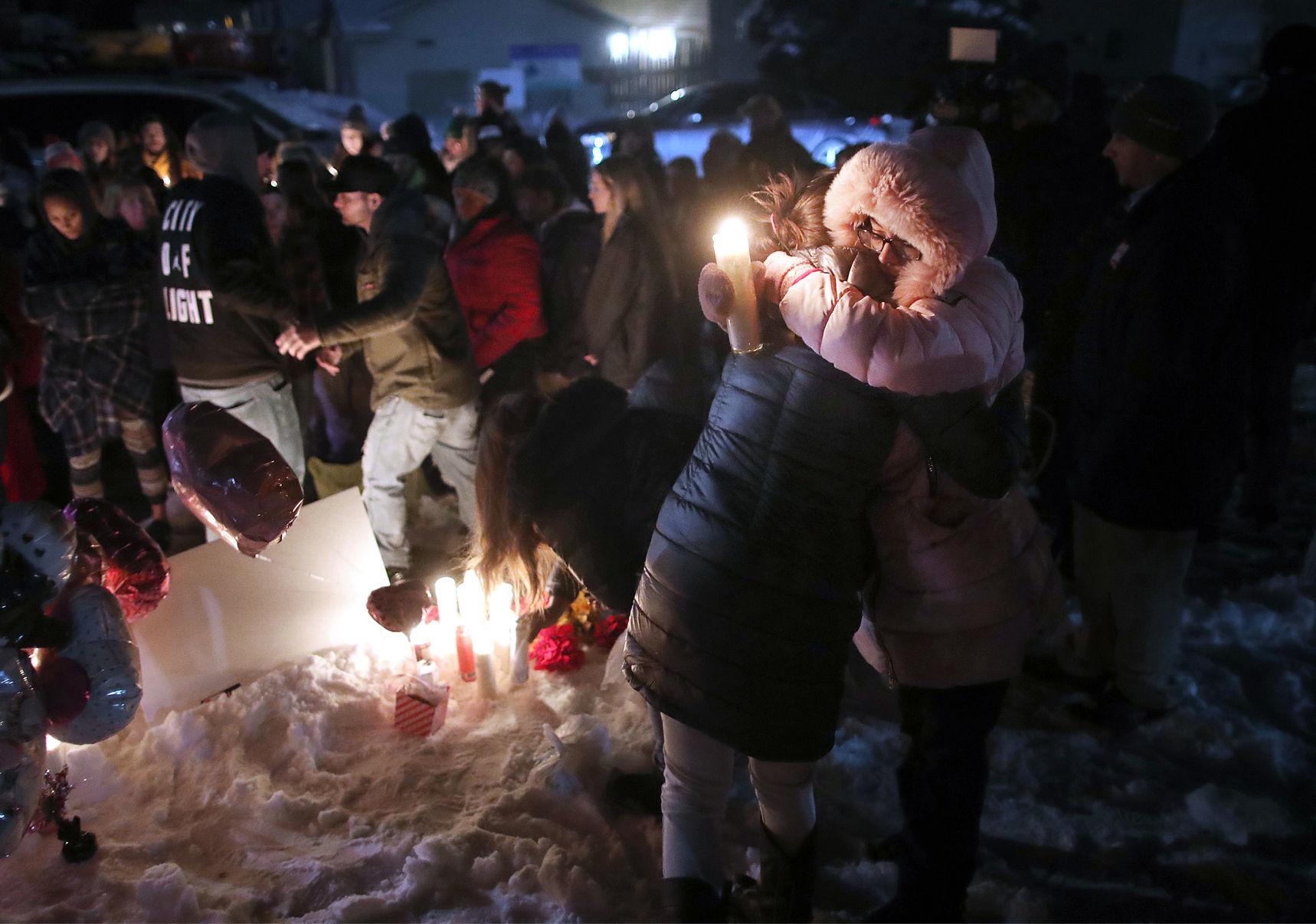 They also believe the shootings occurred where the women were found, in the 3200 block of Midvale Drive on the city’s east side, he said.

Law enforcement agencies in Illinois are providing assistance in the case, Aagaard said. A black, four-door Jeep SUV that belonged to Mcadory was found abandoned on Interstate 90 at Hoffman Estates near Chicago soon after the shootings.

Police have discovered McAdory recently had moved to Joliet, Illinois, and investigators were trying to determine where in Joliet she lived, Aagaard said.

Winchester lived on Osborne Avenue on Janesville's south side, he said. 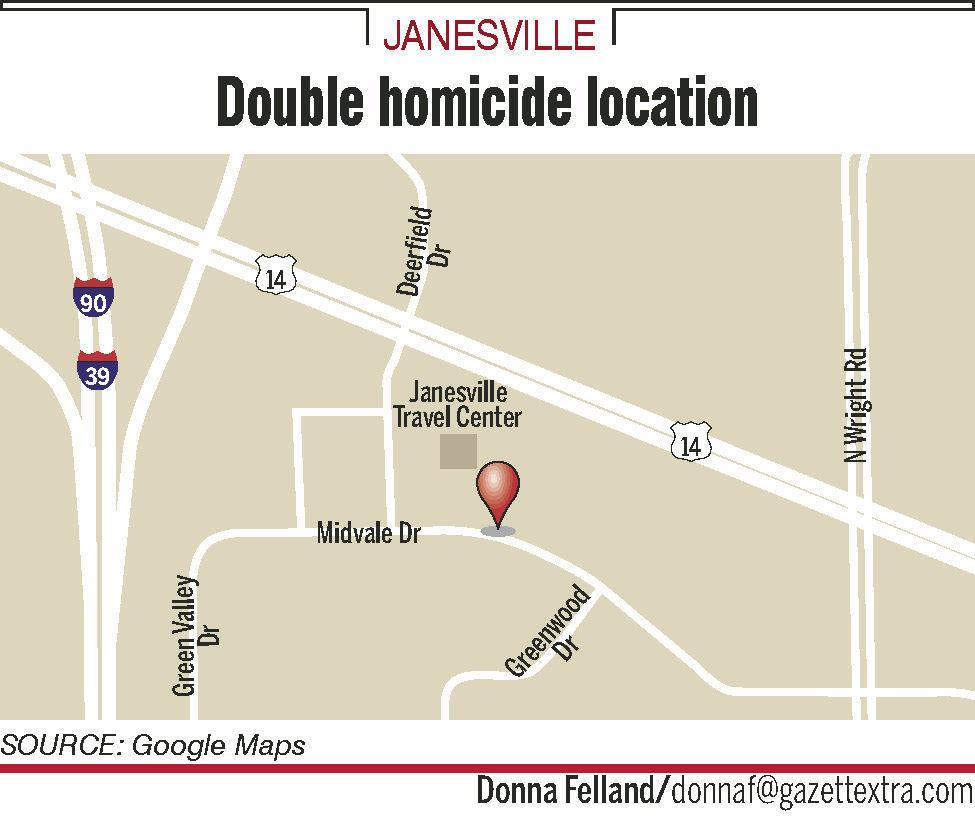 Asked late Tuesday afternoon if a suspect or person of interest had been identified, Aagaard said “not really” but investigators were “working through names.”

Other comments from Aagaard:

Aagaard said he has seven detectives and six members of the department’s Street Crimes Unit along with three shifts of patrol officers at his disposal in what is a complicated investigation.

Police are working to first capture the most time-sensitive information, such as video evidence that could be deleted if not saved, Aagaard said.

Family and friends grieved the loss of two women shot and killed in Janesville on Monday morning.

“Our focus is on trying rebuild the final moments of their lives,” including a chronology of where they were at different times, Aagaard said, adding that surveillance video will play a large role in this task.

As for rumors about the killings that have spread on social media: “That’s the nature of social media, I guess. I would just ask that if people aren’t sure whether the information they are putting out is false or not, I would encourage them not to do that.”

The 911 call alerting police came from someone driving by, who stayed with the women until police got there. The caller had no connection to the women or the crime. 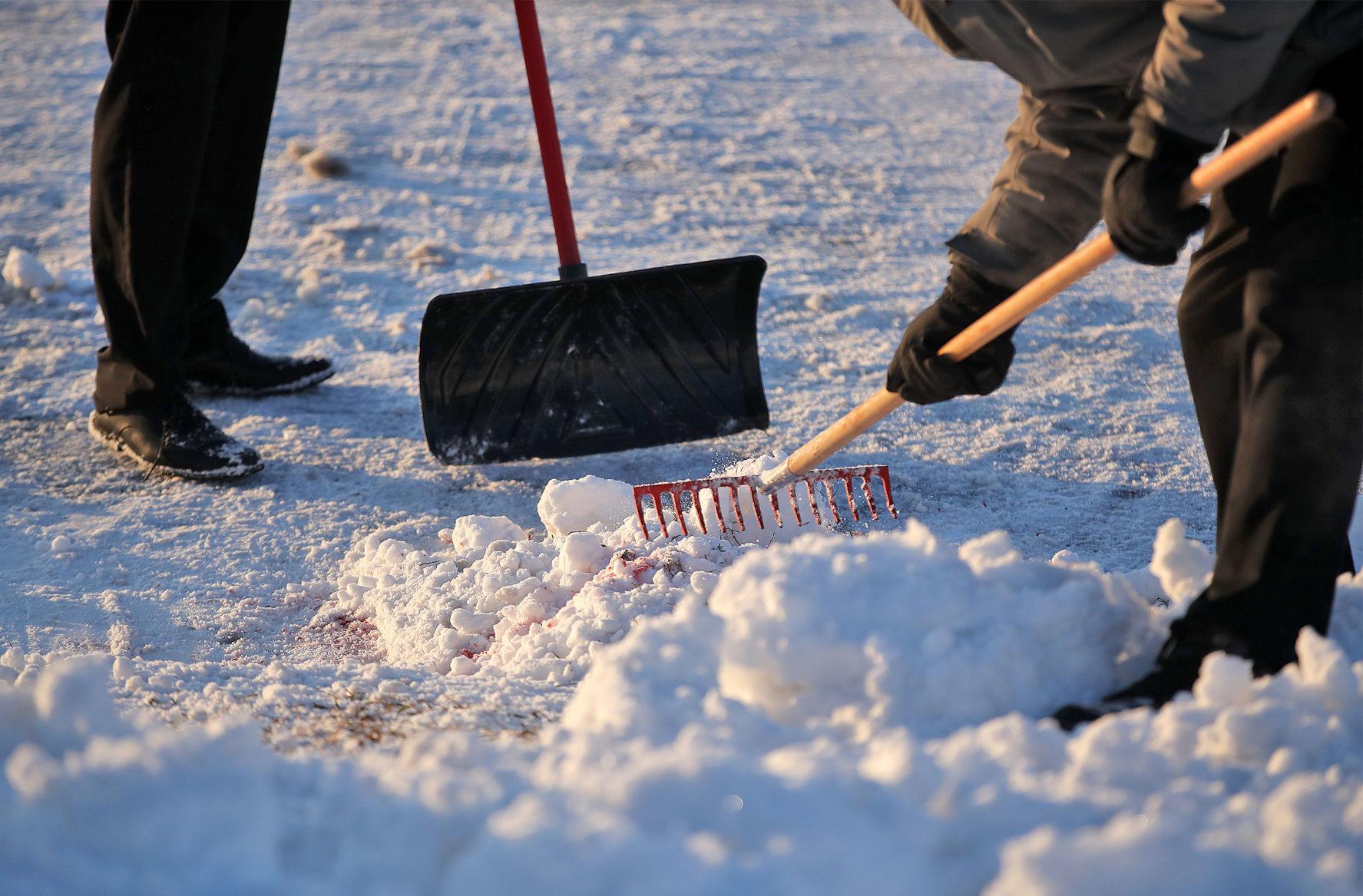 Janesville police use a shovel and rake to search the scene where two women were shot and killed near Midvale and Deerfield drives early Monday morning.

People gather for a candlelight vigil at a roadside memorial for Brittany N. McAdory, 27, and Seairaha J. Winchester, 30, who were shot and killed early Monday on Midvale Drive in Janesville.

An emotional Kiara McAdory, 18, secures a vase of flowers in the snow next to a roadside memorial for her cousin Brittany N. McAdory, 27, and Seairaha J. Winchester, 30, who were shot and killed early Monday on Midvale Drive in Janesville.

Kiara McAdory writes a message in the snow near the roadside memorial for her cousin Brittany N. McAdory, 27, and Seairaha J. Winchester, 30, who were shot and killed early Monday on Midvale Drive in Janesville.

People gather for a candlelight vigil at a roadside memorial along Midvale Drive in Janesville for Brittany N. McAdory, 27, and Seairaha J. Winchester, 30. The women were shot and killed early Monday at the site of the vigil.

A sign with photographs of Brittany N. McAdory stands at a memorial in Janesville for her and Seairaha J. Winchester.

Khaliyah Smith lost one of her best friends Monday, two months after the father of her daughter died.

Both of her loved ones were shot and killed, and now Smith is left trying to explain to her young daughter what happened to her father and one of her favorite “aunts.” 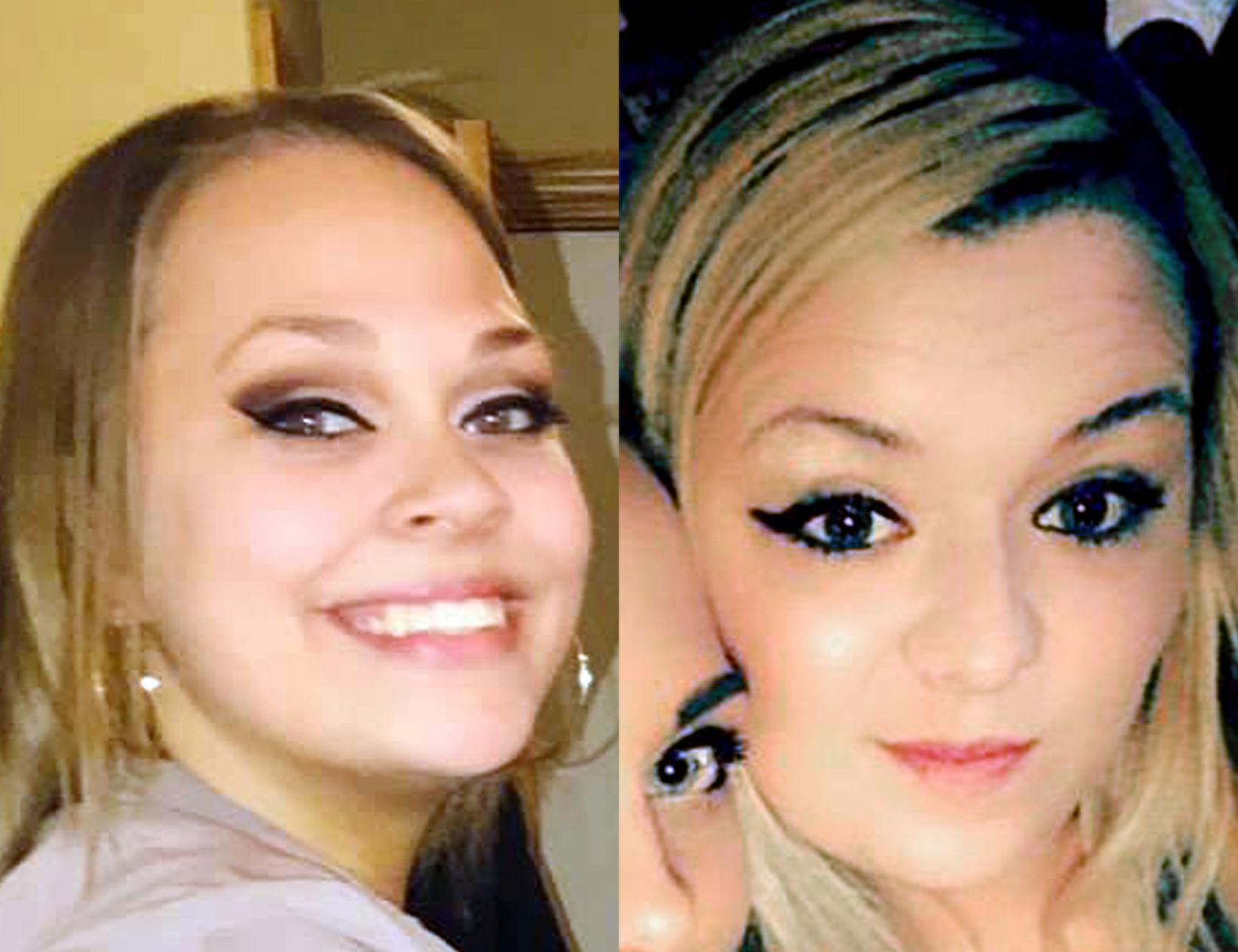 The father of Smith’s daughter was Montay Penning, the Janesville man shot and killed by Beloit police Dec. 10.

Preliminary results from autopsies conducted at the Dane County Medical Examiner’s Department on Monday showed both women died from “homicidal, firearm-related trauma,” according to the news release.

Brittany was funny, energetic and loving. She would give the socks off her feet to help someone else, Smith said.

Brittany taught Smith’s daughter how to make a funny face. The little girl likes to run around the house making the face and saying, “Look what Aunt Brittany taught me,” Smith said.

Brontae Hibbler knew Winchester for 13 years and said she was a bubbly and funny person. She reminisced about times when Winchester and Hibbler rode around and listened to music together.

No suspect yet in double homicide, Janesville police say

Neely said she never in a million years would have believed something so horrible would happen to Winchester and Brittany. Now, six children—four from Winchester and two from Brittany—are left without mothers, Neely said.

Kiara Mcadory, Brittany’s cousin, dropped to her knees along the side of Midvale Drive on Tuesday afternoon.

The 18-year-old woman sobbed in front of a memorial of balloons, flowers, Newport cigarettes, empty bottles of Hennessy liquor, stuffed animals and a Dunkin Donuts iced coffee anchored in the snow.

Kathy Patrick, Brittany’s aunt, said Brittany smiled all the time. She was a happy person who would never hurt anyone, she said.

Patrick, Kiara and Kayla, visited the memorial at about 1 p.m. Tuesday.

They decorated it with flowers and balloons and spray painted “RIP Britt” and “RIP Sea Sea” in the snow.

Brittany was a mother above all else. She was devoted to her son and daughter, Patrick said.

Patrick smiled as she remembered Brittany singing songs from the movie “Moana” to her daughter.

Brittany recently had enrolled in school to pursue nursing, Patrick said, and had posted on Facebook about her excitement for school.

“Got accepted into school to start my LPN journey,” Brittany posted. “I moved away to start a new life and it may be challenging but I’m going to do this.”

Brittany recently moved to Joliet, Illinois, for school and was in Janesville to visit loved ones at the time of her death, Smith said.

As Janesville comes to grips with a double homicide, here is a look back at previous homicides in the city in which one or more person died over the past 50 years.

Patrick on Monday learned about Winchester’s death before Brittany’s. She knew Brittany and Winchester were friends.

“(I thought) please don’t tell me she (Brittany) was with her,” Patrick said. “And she was.”

Winchester was a bubbly woman and always was nice the few times Patrick met her, she said.

Whoever killed the two women needs to be brought to justice, Neely said.

But even a life sentence in prison won’t heal loved ones’ wounds or help them grieve, Hibbler said.

“She (Brittany) was the most happiest person,” Kiara said through tears.

More than 100 people turned out for the Tuesday night vigil at the site of the deaths. Many took balloons, candles, flowers and flying lanterns. 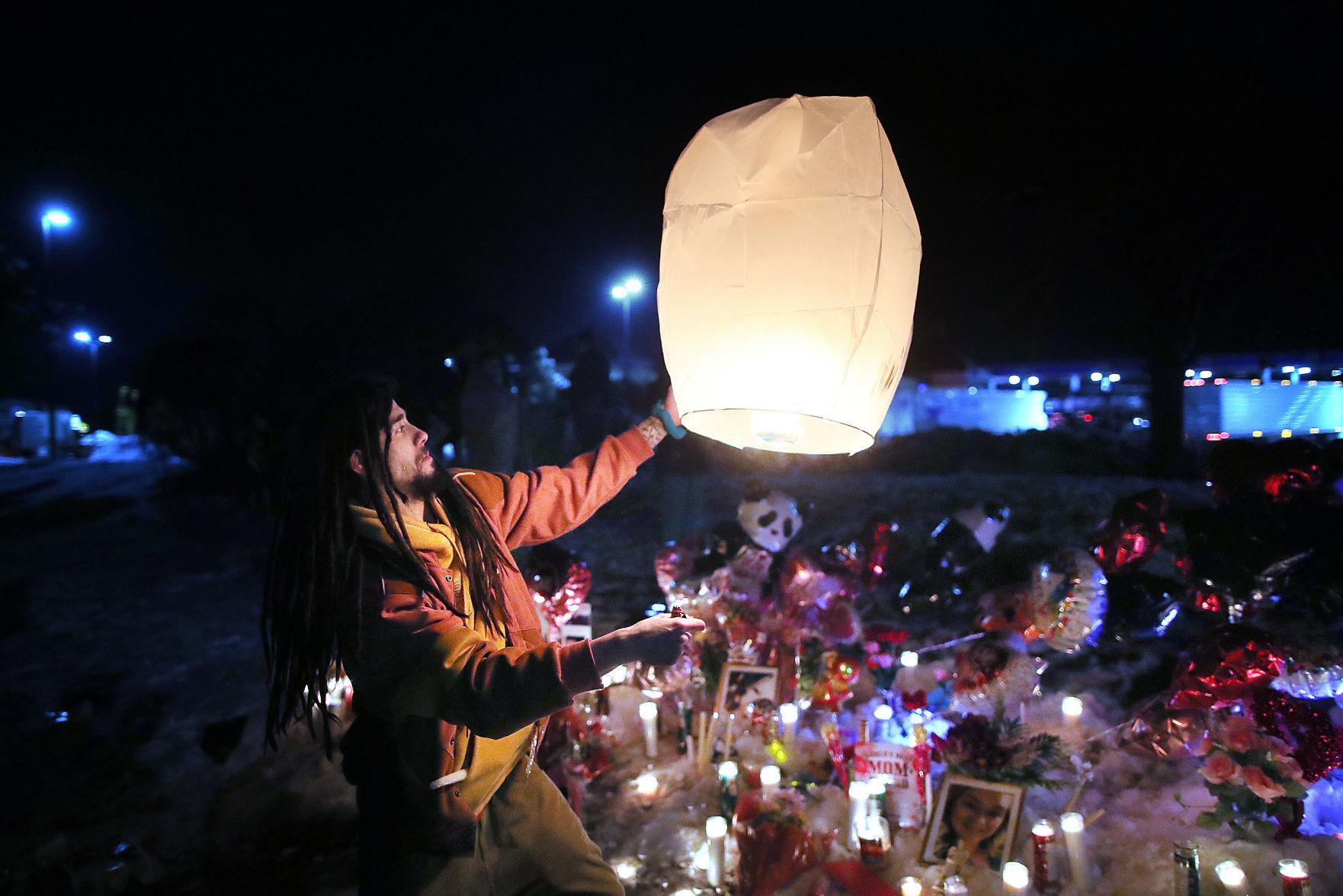 A vigil attendee releases a paper lantern during a candlelight vigil at Tuesday night's memorial for Brittany N. McAdory, 27, and Seairaha J. Winchester, 30, who were shot and killed early Monday in Janesville.

Many stood silent. Others hugged and cried.

Winchester’s father, Clarence Winchester, addressed the crowd briefly: “I appreciate you guys for showing up here. She would’ve, too.”

Later, Winchester said he hopes the killer “gets what he deserves, and he knows who he is. He will be caught.”

Among the mourners was Vallarie Soler, who babysat Mcadory’s children and was close to the family.

“This is not right. She’s not supposed to be gone,” Soler said as her tears started. “This is a bad dream. She didn’t deserve none of this.”

Past multiple homicide events in Janesville
02.11.20

JANESVILLE—As Janesville comes to grips with a double homicide, here is a look back at previous homicides in the city in which more than one person died over the past 50 years:

Cheryl Klemann, who was 21 and six months pregnant, and Mary McGowan, 19, were asphyxiated by smoke. William Lyons, 35, died two weeks later from burns suffered in the fire.

May 26, 1969: Urial “Riley” Behling kills ex-girlfriend Goldie Thomas and her date, Steven Brown, with a .38-caliber pistol at 432 N. Parker Drive before suffocating himself with carbon monoxide in his car.

Behling told Thomas if she didn’t promise to marry him that weekend there would be murder and a suicide.

Behling left work at General Motors in Janesville early before heading to Thomas’ home, where he shot Brown twice in the abdomen, killing him. He drove his vehicle into Thomas in the driveway, knocking her over.

He then shot Thomas once in the chest after she begged him not to hurt her. She died an hour later at Mercy Hospital. Behling also shot Douglas Miller in the stomach. He was treated at Mercy and released.

Three children were in the house at the time of the shooting, including Thomas’ 5-year-old son.

Behling then drove to a field in the town of Plymouth and killed himself.

This may not be a comprehensive list. Anyone with information about other incidents may contact Gazette reporter Frank Schultz at fschultz @gazettextra.com. 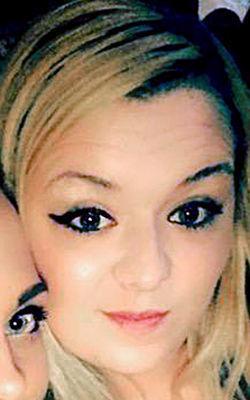 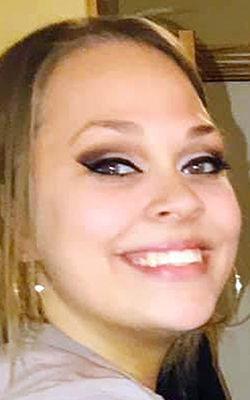 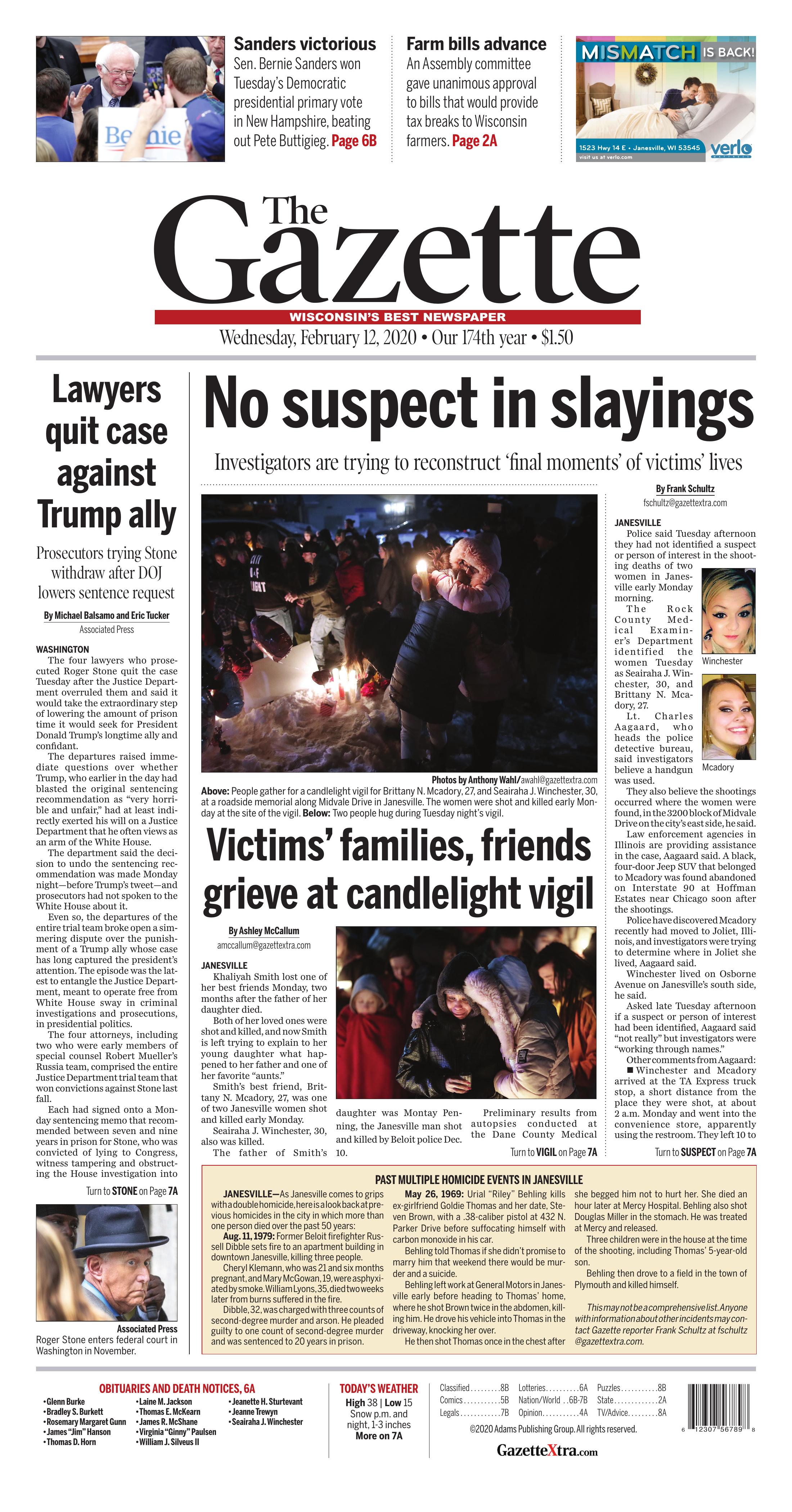