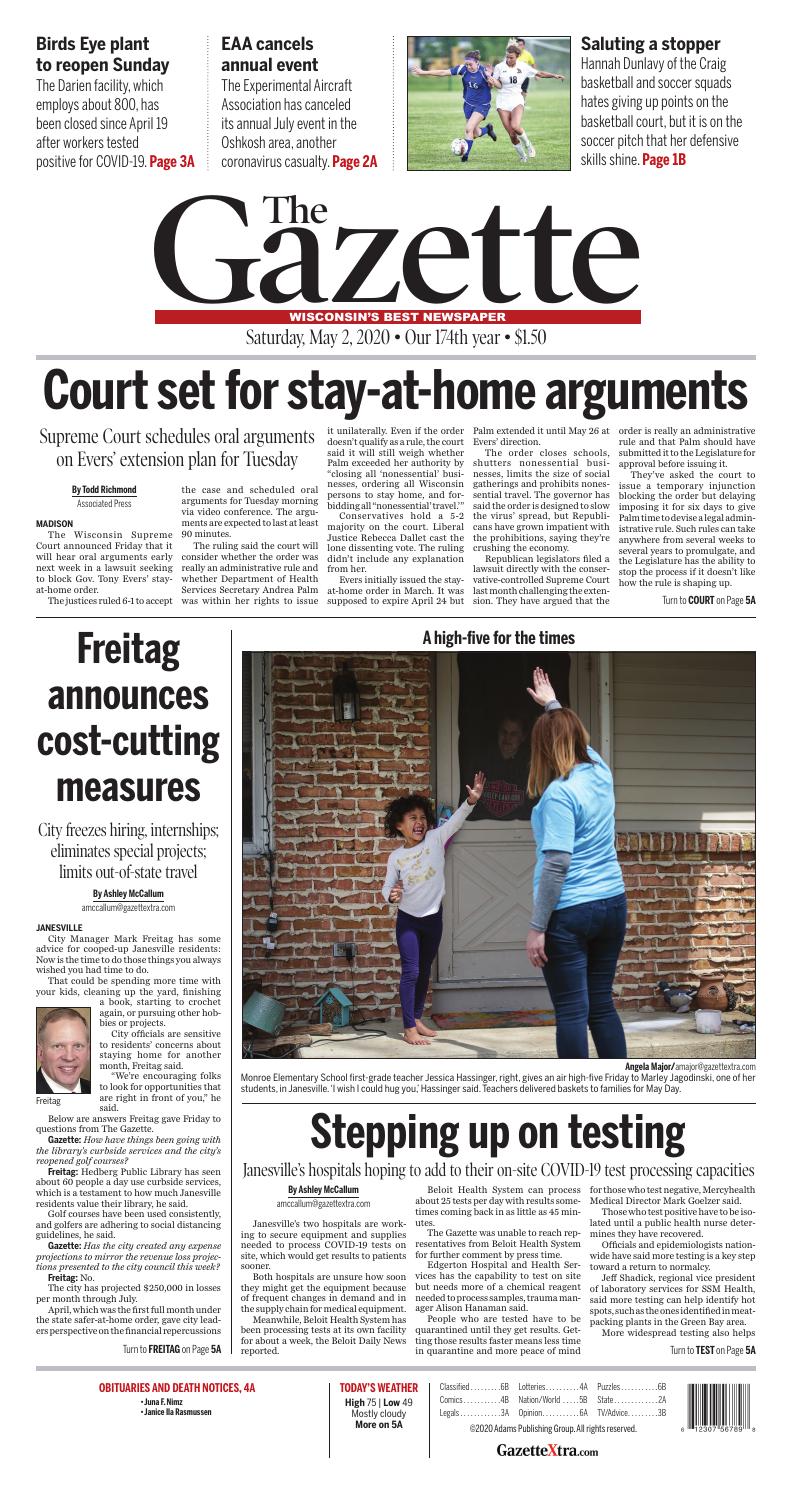 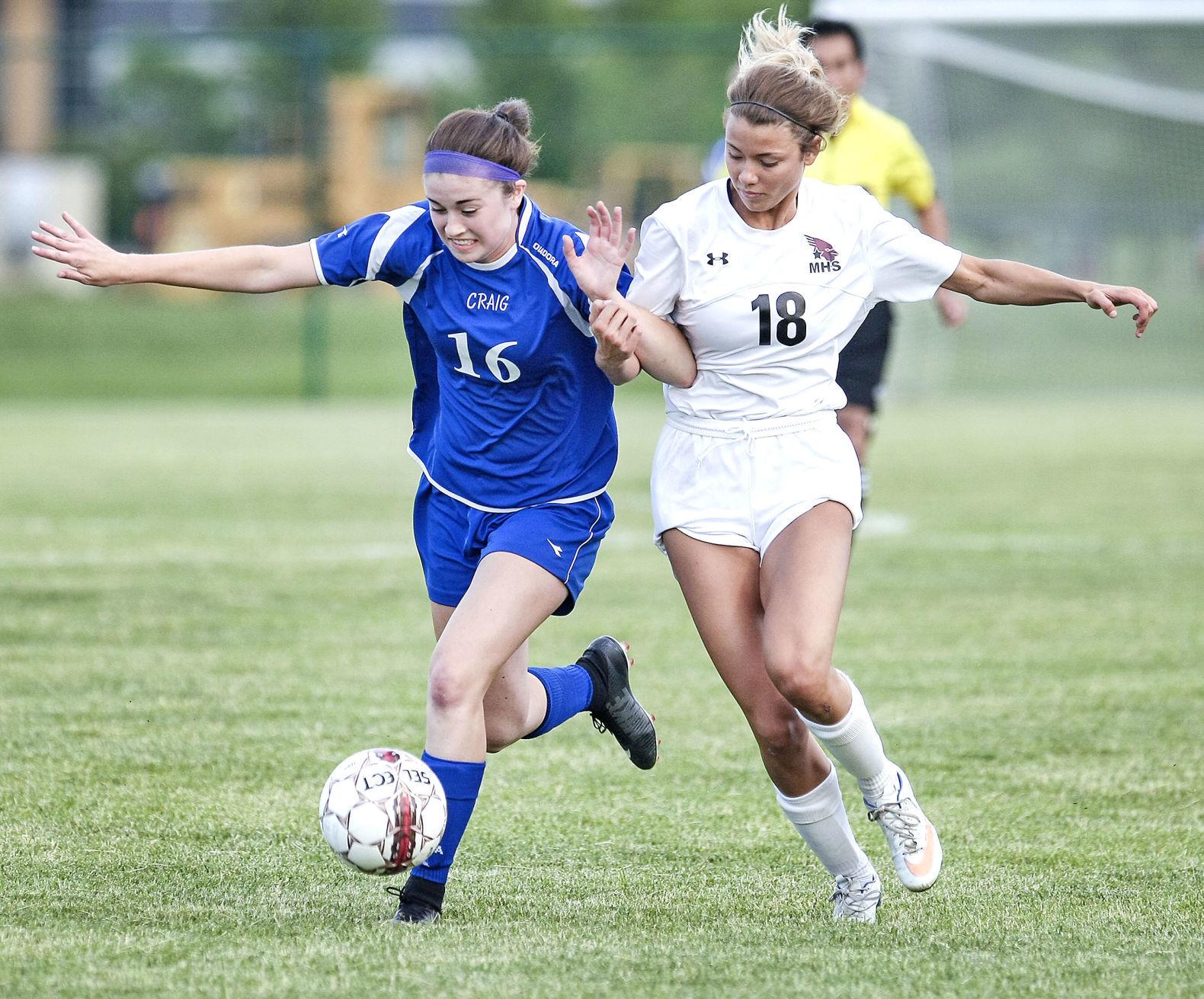 The Wisconsin Supreme Court announced Friday that it will hear oral arguments early next week in a lawsuit seeking to block Gov. Tony Evers’ stay-at-home order.

The justices ruled 6-1 to accept the case and scheduled oral arguments for Tuesday morning via video conference. The arguments are expected to last at least 90 minutes.

The ruling said the court will consider whether the order was really an administrative rule and whether Department of Health Services Secretary Andrea Palm was within her rights to issue it unilaterally. Even if the order doesn’t qualify as a rule, the court said it will still weigh whether Palm exceeded her authority by “closing all ‘nonessential’ businesses, ordering all Wisconsin persons to stay home, and forbidding all “nonessential’ travel.’”

Conservatives hold a 5-2 majority on the court. Liberal Justice Rebecca Dallet cast the lone dissenting vote. The ruling didn’t include any explanation from her.

Evers initially issued the stay-at-home order in March. It was supposed to expire April 24 but Palm extended it until May 26 at Evers’ direction.

The order closes schools, shutters nonessential businesses, limits the size of social gatherings and prohibits nonessential travel. The governor has said the order is designed to slow the virus’ spread, but Republicans have grown impatient with the prohibitions, saying they’re crushing the economy.

Republican legislators filed a lawsuit directly with the conservative-controlled Supreme Court last month challenging the extension. They have argued that the order is really an administrative rule and that Palm should have submitted it to the Legislature for approval before issuing it.

They’ve asked the court to issue a temporary injunction blocking the order but delaying imposing it for six days to give Palm time to devise a legal administrative rule. Such rules can take anywhere from several weeks to several years to promulgate, and the Legislature has the ability to stop the process if it doesn’t like how the rule is shaping up.

Evers has countered that the executive branch has broad authority to combat communicable diseases and that Republicans haven’t presented any alternative plans. But he faces an uphill fight with the conservative-leaning court.

Republican legislative leaders and Evers began trading emails about setting up a meeting next week to discuss reopening the state minutes before the court announced its ruling.

Wisconsin’s confirmed coronavirus cases increased by 460 on Friday, the second day in a row of record-high infections, the Department of Health Services reported.

Evers’ plan for re-opening calls for a general 14-day decline in new cases as a percentage of overall tests given.

Janesville’s two hospitals are working to secure equipment and supplies needed to process COVID-19 tests on site, which would get results to patients sooner.

Both hospitals are unsure how soon they might get the equipment because of frequent changes in demand and in the supply chain for medical equipment.

Meanwhile, Beloit Health System has been processing tests at its own facility for about a week, the Beloit Daily News reported.

Beloit Health System can process about 25 tests per day with results sometimes coming back in as little as 45 minutes.

The Gazette was unable to reach representatives from Beloit Health System for further comment by press time.

Edgerton Hospital and Health Services has the capability to test on site but needs more of a chemical reagent needed to process samples, trauma manager Alison Hanaman said.

People who are tested have to be quarantined until they get results. Getting those results faster means less time in quarantine and more peace of mind for those who test negative, Mercyhealth Medical Director Mark Goelzer said.

Those who test positive have to be isolated until a public health nurse determines they have recovered.

Officials and epidemiologists nationwide have said more testing is a key step toward a return to normalcy. 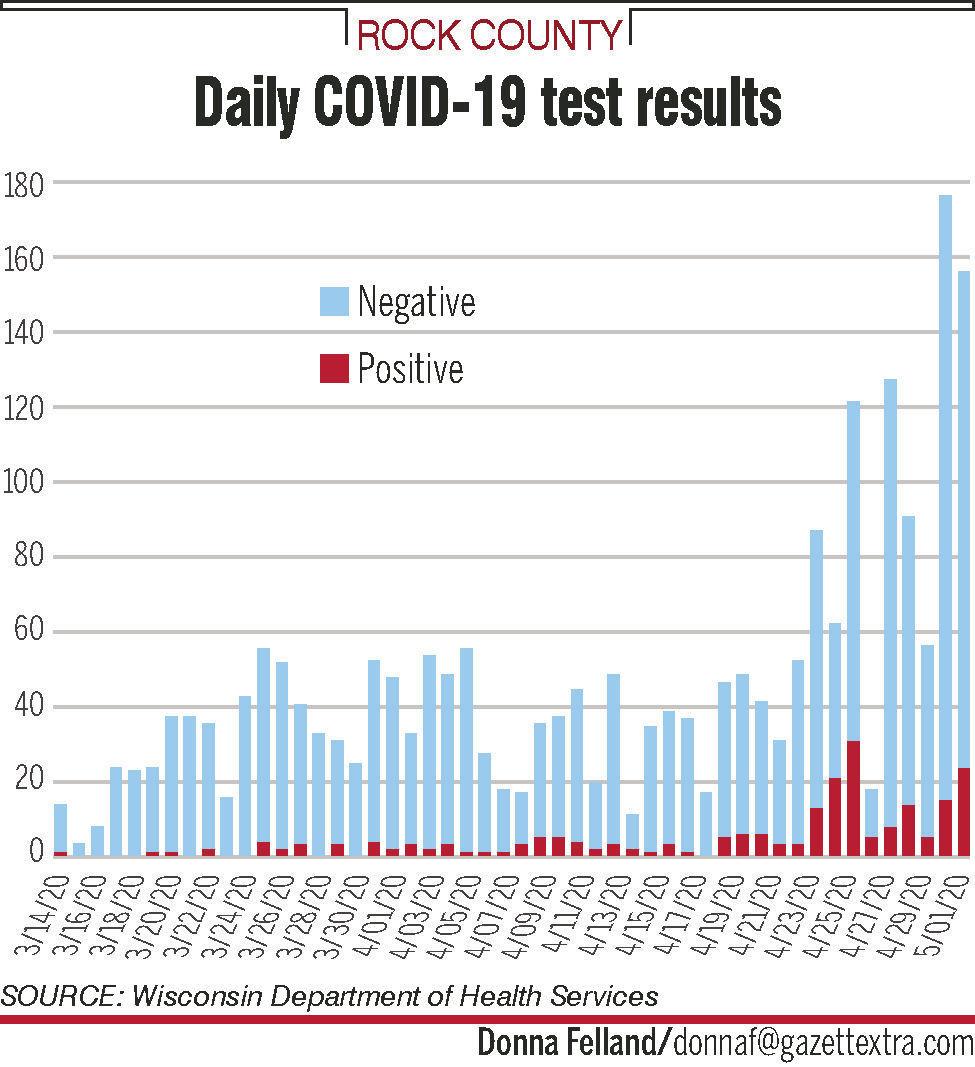 Jeff Shadick, regional vice president of laboratory services for SSM Health, said more testing can help identify hot spots, such as the ones identified in meatpacking plants in the Green Bay area.

More widespread testing also helps public health workers determine how and where the disease has spread through contact tracing, he said.

Mercyhealth, SSM Health and Edgerton Hospital officials said they have been able to conduct more testing but worry about the availability of testing supplies.

In the beginning, hospitals dealt with a reagent shortfall. Then the number of other supplies, primarily nasal swabs, reached critically low levels, Shadick said.

The good news is that the supply of testing materials is stabilizing as manufacturers get approval from the federal government for emergency production, Shadick said.

But hospitals, state organizations and the federal government are competing for the gear, making it difficult to get everyone what they need, Mercyhealth’s Goelzer said.

As of Friday, 222 Rock County residents have tested positive for COVID-19. Six people have died.

Mercyhealth is sending its tests to commercial labs and receiving results in a day or two, Goelzer said.

The system recently opened a second drive-thru site for testing, Goelzer said. Patients must be referred by a doctor before they can go to either drive-thru location.

Mercyhealth has the equipment needed to do in-house testing but is waiting to secure the appropriate supplies, Goelzer said. How soon the supplies come depends on the system’s vendors, he said.

Mercyhealth also is working on attaining antibody tests to determine whether somebody might have already been infected, Goelzer said. Such testing is still in early stages of development and has varying levels of accuracy, he added.

Supply shortages prevent Mercyhealth, and most other hospitals, from doing as much testing as they want to do, Goelzer said.

Tests from SSM Health St. Mary’s Hospital-Janesville are processed at an SSM Health lab in Madison. Six couriers collect tests in Janesville each day and transport them there, Shadick said.

Patients get same-day results, Shadick said. That’s a major improvement from the beginning of the pandemic when it took six to eight days to get results.

Equipment to test on site in Janesville has been ordered but is delayed as equipment is redirected to areas of greater need, Shadick said.

Edgerton Hospital is sending test results to commercial labs with results coming back in less than 24 hours, Hanaman said.

Tests are available at the hospital and at the system’s clinic in Milton. Patients are evaluated upon arrival and are tested if they show COVID-19 symptoms, which include cough, shortness of breath, fever, chills, headache, sore throat, muscle pain, and loss of taste or smell.

City Manager Mark Freitag speaks during the State of the City address.

City Manager Mark Freitag has some advice for cooped-up Janesville residents: Now is the time to do those things you always wished you had time to do.

That could be spending more time with your kids, cleaning up the yard, finishing a book, starting to crochet again, or pursuing other hobbies or projects.

City officials are sensitive to residents’ concerns about staying home for another month, Freitag said.

“We’re encouraging folks to look for opportunities that are right in front of you,” he said.

Below are answers Freitag gave Friday to questions from The Gazette.

Gazette: How have things been going with the library’s curbside services and the city’s reopened golf courses?

Freitag: Hedberg Public Library has seen about 60 people a day use curbside services, which is a testament to how much Janesville residents value their library, he said.

"I am just not a believer we are ever going to return to what we had before," City Manager Mark Freitag said. "... Our entire society will change somewhat."

Golf courses have been used consistently, and golfers are adhering to social distancing guidelines, he said.

Gazette: Has the city created any expense projections to mirror the revenue loss projections presented to the city council this week?

The city has projected $250,000 in losses per month through July.

The city of Janesville is projecting $719,000 of lost revenue from various programs between March and June because of the coronavirus pandemic, Finance Director Max Gagin reported to the city council Monday night.

April, which was the first full month under the state safer-at-home order, gave city leaders perspective on the financial repercussions of the pandemic. A first round of “obvious” cuts was announced today based on those predictions, he said.

In a memo to staff, Freitag announced these cost-saving measures:

City leaders will meet in mid-May to discuss further cuts or expense reductions.

Freitag expects the city will make month-to-month adjustments depending on what happens at the state and local level.

Gazette: How has the pandemic affected economic development efforts? Have any projects been canceled or postponed?

Freitag: The economic development office has shifted its focus to helping local businesses apply for aid.

Several projects are in various stages of approval. Only one of at least a half-dozen has been delayed, he said.

He declined to share the nature of the project.

Gazette: Have any business owners or developers who were eyeing Janesville had to walk away?

Freitag: “None that we are aware of,” he said.

City officials recently met with a developer in Madison who is interested in multiple downtown projects, he said.

Construction is relatively stable, and Freitag thinks the city will continue to grow despite the economic downturn.

Projects such as the Monterey lagoon restoration, the downtown pedestrian bridge, the east-side town square and three apartment complexes are continuing.

City Hall renovations are on hold while crews determine the source of a roof leak.

Gazette: Has the city made any changes because of the pandemic that you think might be adopted permanently?

Freitag: The city has learned important lessons about providing services during a time of change, he said.

City leaders are now at ease with communicating remotely and might use video conferencing for future meetings that involve people who work in multiple facilities.

The pandemic has underscored the importance of emergency planning, and the city will continue its frequent emergency preparedness training.

Gazette: Has the city helped St. Elizabeth Nursing Home since it announced it had positive COVID-19 cases?

Freitag: The city was made aware of cases right away and was able to offer assistance, he said.

The city gave St. Elizabeth, per its request, 100 isolation gowns for its workers.

The nursing home is following the Centers for Disease Control and Prevention’s best practices, he said.

The city’s emergency operations division reaches out to all senior care facilities in the city every other day to ensure their needs are being met. 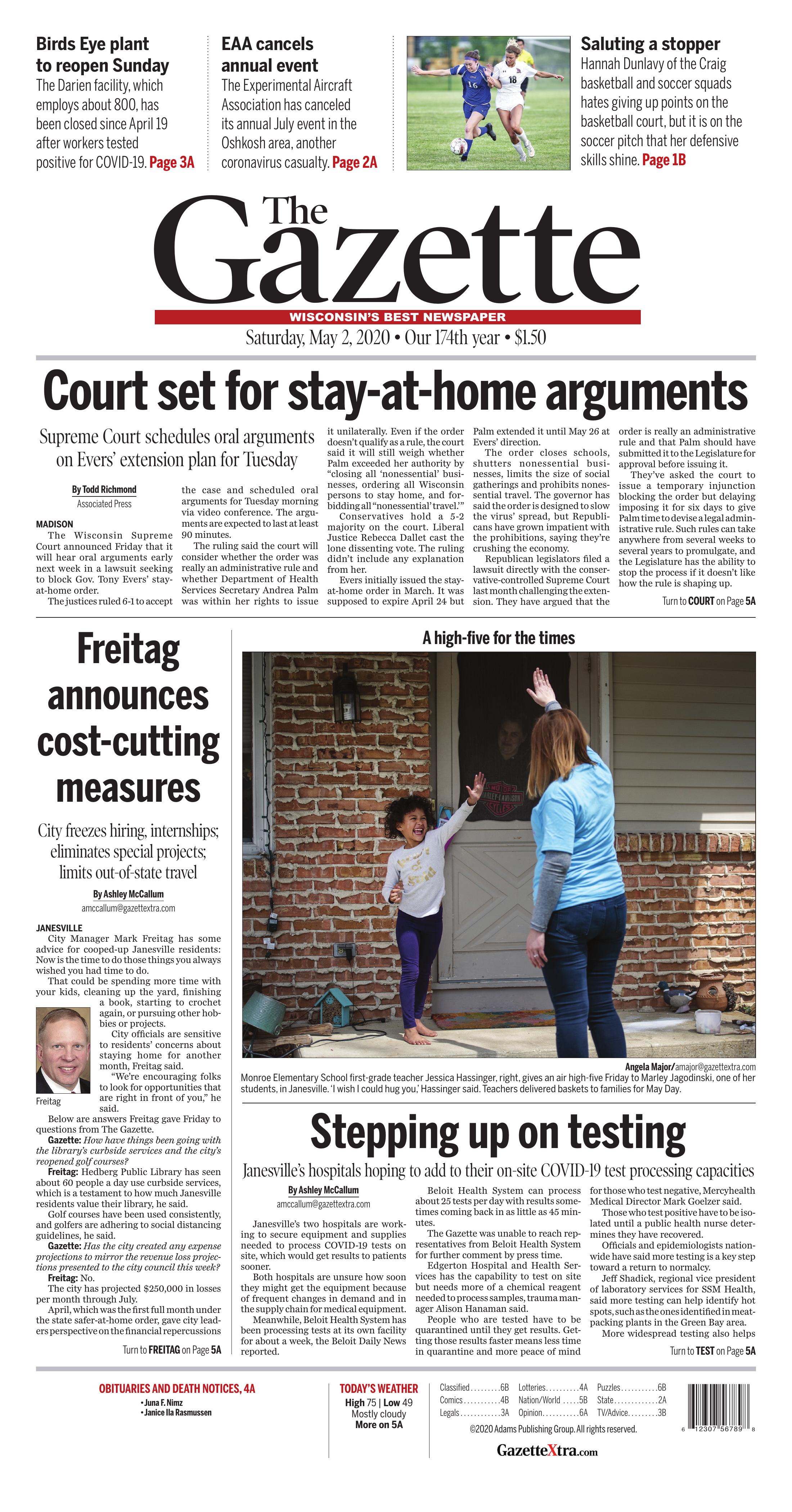