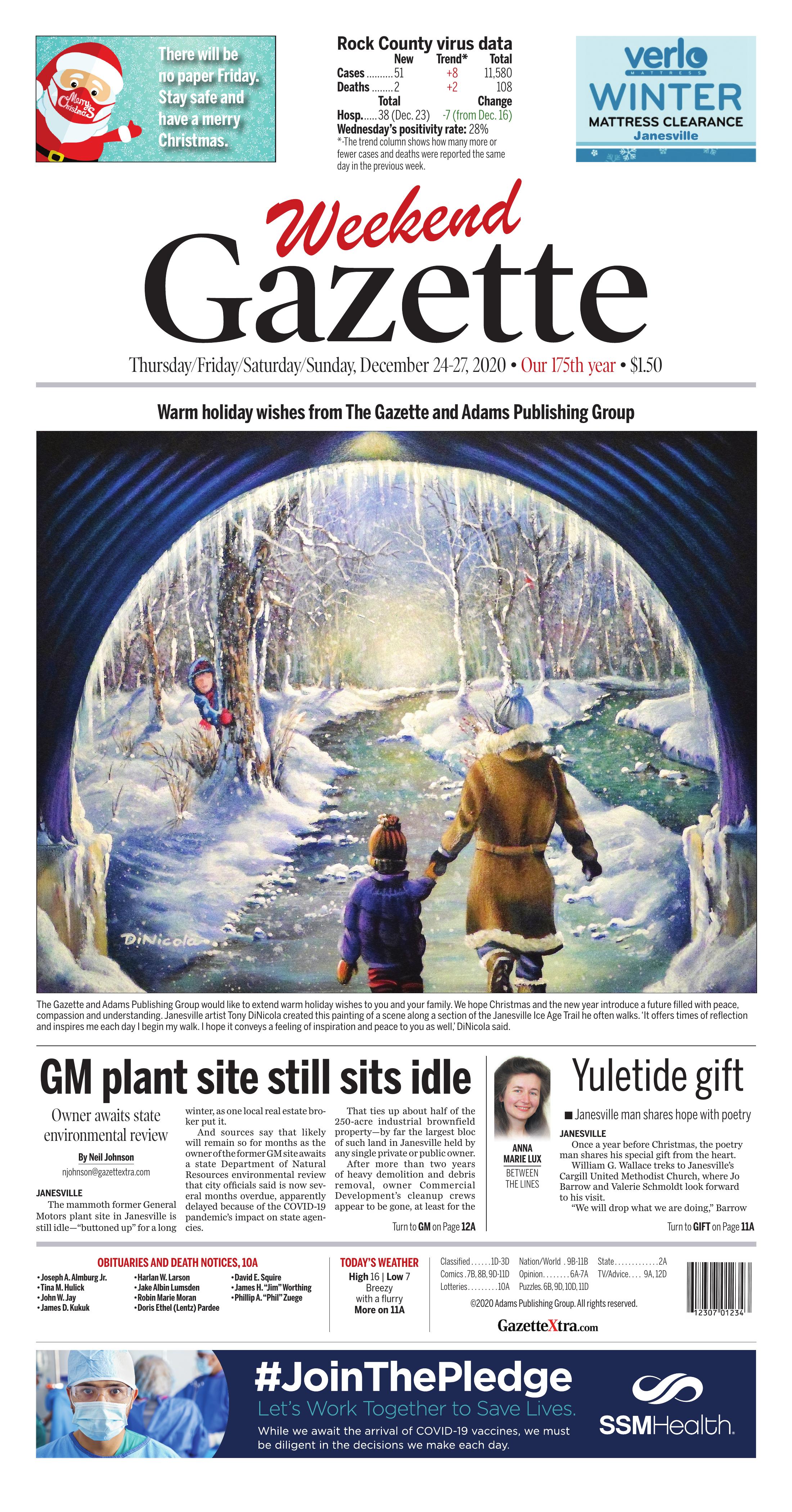 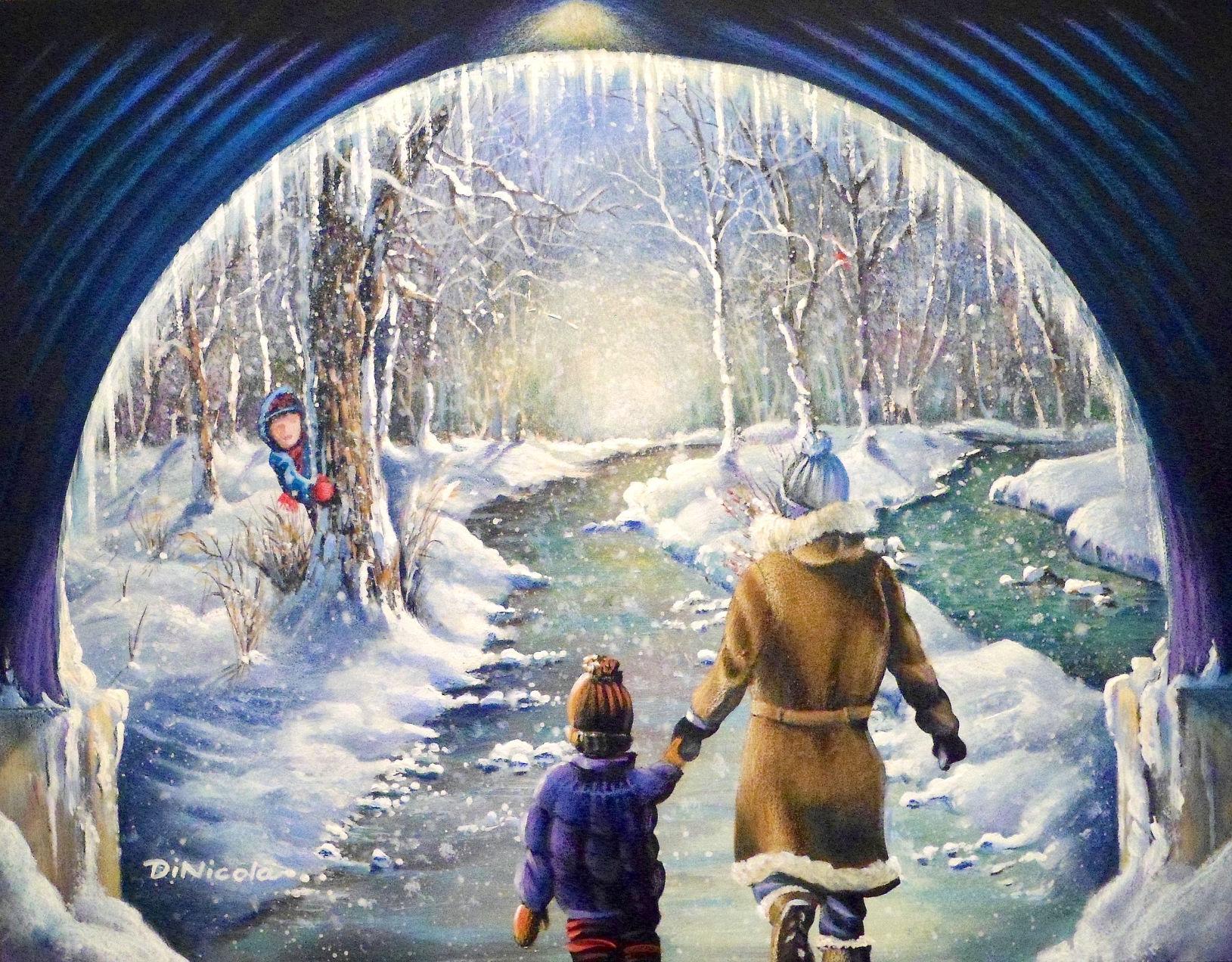 The Gazette and Adams Publishing Group would like to extend warm holiday wishes to you and your family. We hope Christmas and the new year introduce a future filled with peace, compassion and understanding. Janesville artist Tony DiNicola created this painting of a scene along a section of the Janesville Ice Age Trail he often walks. ‘It offers times of reflection and inspires me each day I begin my walk. I hope it conveys a feeling of inspiration and peace to you as well,’ DiNicola said.

Equipment and vehicles sit in a parking lot leased as overflow storage just east of the former General Motors main assembly plant property in Janesville. Insiders say land leases are the only deals moving at the 250-acre site, half of which remains under a protracted environmental review by the state Department of Natural Resources.

The mammoth former General Motors plant site in Janesville is still idle—“buttoned up” for a long winter, as one local real estate broker put it.

And sources say that likely will remain so for months as the owner of the former GM site awaits a state Department of Natural Resources environmental review that city officials said is now several months overdue, apparently delayed because of the COVID-19 pandemic’s impact on state agencies.

That ties up about half of the 250-acre industrial brownfield property—by far the largest bloc of such land in Janesville held by any single private or public owner.

After more than two years of heavy demolition and debris removal, owner Commercial Development’s cleanup crews appear to be gone, at least for the time being.

Gone are giant piles of scrap metal from the former plant buildings that workers had spent months sorting and trucking off the site.

What remains is a vast, mostly undisturbed expanse of concrete footings—the one dominant remnant of the GM auto plant that once employed thousands.

For now, the relative emptiness signals a continued wait. 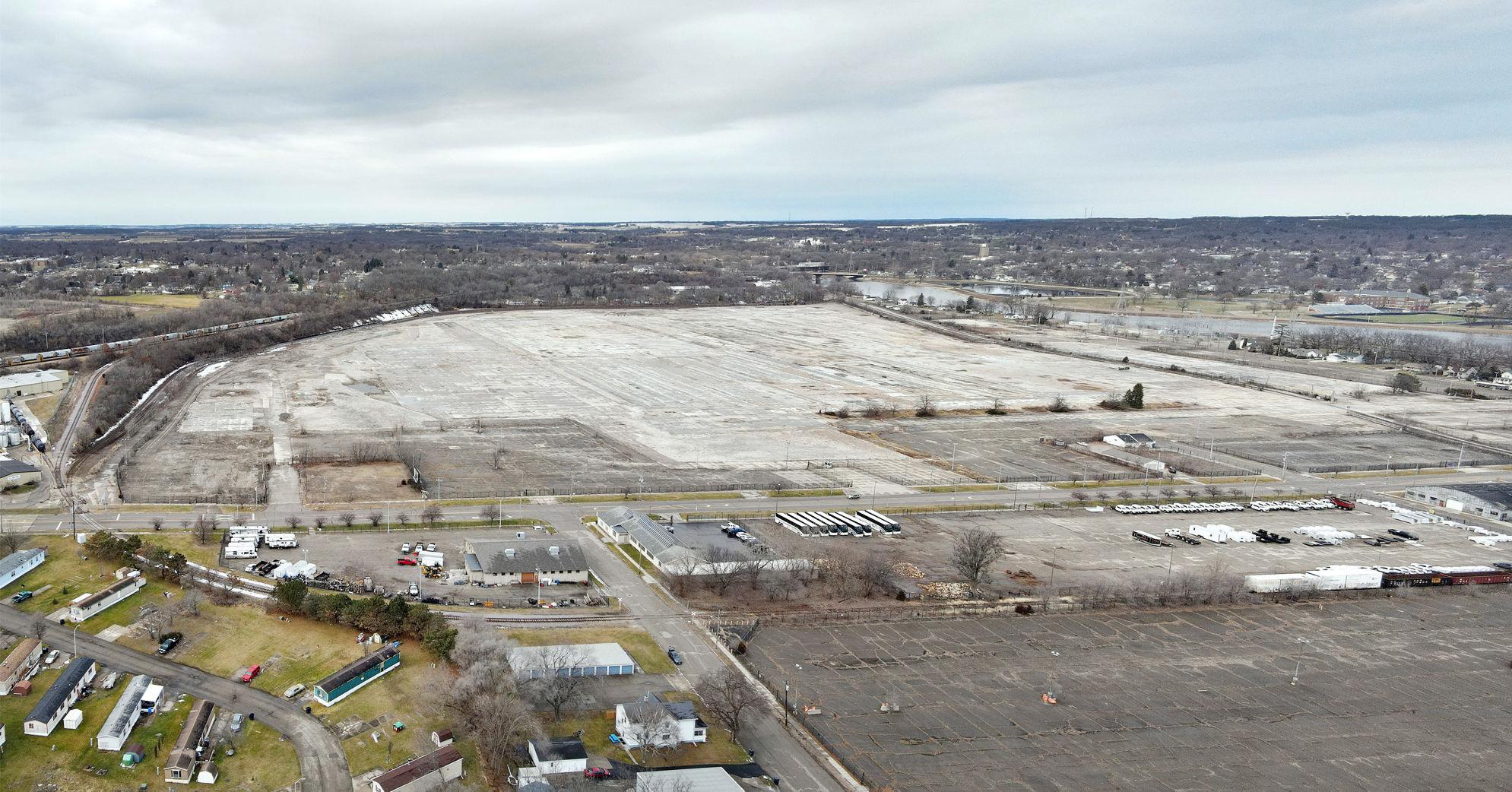 The GM site stands idle and empty after its owner finished removal of almost all remnants of the assembly plant. Remaining is concrete foundation that dominates most of the location. The city is waiting for the site’s owner to provide a second-phase plan to ready the 250-acre site for redevelopment, but a DNR review has been delayed months during the COVID-19 pandemic.

Those with an inside glimpse say concerted plans to move the former auto plant property toward market as Centennial Industrial Park—a multiparcel, light-industry redevelopment site—remain in a holding pattern as a soil and water investigation and environmental remediation report awaits final review by the DNR.

Mears is the local broker Commercial Development hired to market the main GM plant site and the 110-acre, former JATCO haul-away yard to the south, which the DNR already has OK’d for future redevelopment.

One of the major questions still is whether the DNR will require Commercial Development to remove some or all of the leagues of leftover concrete foundations that cover most of the north plant site or if the agency will allow the concrete to remain in place, undisturbed, as an environmental cap on a site where heavy industrial operations had run for 100 years.

Tom Clippert, the city’s building director, is the official in charge of compliance under the city’s rules for the former GM site, which is covered by a city overlay district for redevelopment.

Clippert on Wednesday said Commercial Development still has not submitted a phase 2 cleanup plan the city asked for a year ago under deadlines baked into overlay district rules.

In July, Clippert sent a letter to Commercial Development and pressed the owner to provide the city plans for remaining cleanup—including removal of concrete in the ground and other measures the city considers necessary to ready the site for possible redevelopment.

Clippert’s note came after Commercial Development told the city in a letter in late 2019 that it was “deferring” plans for a second phase cleanup until sometime in 2020, when the company believed the DNR would deliver an environmental review that dealt with concrete at the main plant site, along with decisions on other soil and water investigations.

Until the DNR completes the review, Clippert said, the city doesn’t expect to further plans from Commercial Development.

“They’re working with the DNR, and things have been delayed because of COVID, as you can imagine,” Clippert said. “So they’re still working through that (environmental) process with the DNR. And so we’re waiting for that to happen.”

Mears said he believes the DNR’s review might not wrap up until “sometime next year,” which would be more than a year later than the site’s owner and the city had initially expected.

One afternoon this week, the winter sun set over the site, washing the weed-stubbled concrete in a pale, red light.

The only movement a Gazette reporter and photographer observed on the huge property was a yellow utility train engine that crept slowly along a rail line in the back acres.

For now, only slivers of the main plant site are seeing prospects for reuse, and the only real action going on there right now is a handful of land leases for overflow storage, Mears said.

So far, those leases are limited to former plant parking lots, which would serve as “overflow storage” by some local industries who need secured, fenced-in space to stage equipment and vehicles, Mears indicated.

Mears said he is now working on a lease of about 20 acres inside the main plant property and leases on another 10-acre ancillary lot. That’s even as an environmental review for the site awaits DNR approval.

Mears couldn’t give details about the prospective tenant for the 20-acre parcel.

Other leases of the former plant’s parking areas include space east of South Jackson Street that is being used for equipment owned and built at Northland Equipment, which produces custom truck-bed box systems and other products.

“On the (main) GM site, it’s a lot better to go with land leasing right now because of the pending environmental (review) issues. It works out better,” Mears said. “It’s not like there’s a concerted move to only leasing land there. It just happens that these prospects want to do a land lease right now. Maybe they’ll eventually own.”

William Wallace smiles at his kitchen table after reading aloud a poem he wrote. When Wallace makes his annual trek to Cargill United Methodist Church to share his Christmas poem, the people working there pay attention. This year, his poem was especially poignant because it reflects what so many are feeling—the loneliness that comes from not being able to be with or to hug family members and friends.

William Wallace lays out several recent Christmas poems on his kitchen table. Wallace is a wordsmith who has written thousands of poems in his 79 years and who writes one every Christmas and shares it with the people of Cargill United Methodist Church.

Once a year before Christmas, the poetry man shares his special gift from the heart.

“We will drop what we are doing,” Barrow said. “We don’t care how busy we are.”

This year, as in other years, Wallace did not disappoint Barrow, the office manager, and Schmoldt, the financial coordinator.

Wearing a mask, he read his annual Christmas poem with an abundance of goodwill.

“I stop in every year because I know they like it,” Wallace said.

The women are moved by his kindness.

“It is such a sweet thing that he does,” Schmoldt said. “He just shows up out of the blue and shares his poem. Because his gift is so unique, it warms you to the core.”

Barrow called his original poetry “one of the benefits of working here.”

Every Christmas, the Janesville man pens a new poem and eagerly shares it with family and friends to brighten their days.

This year’s piece focuses on COVID-19 and how the virus has kept people apart.

“We are all missing our families,” Wallace said. “We are not meant to be separated. I’m a hugger, and now we can’t even shake hands. Everyone feels so isolated.”

The 79-year-old is sad because he and his wife, Mary Ann, are missing out on watching their grandkids grow.

His 2020 holiday poem expresses how he and so many others want to get back to “normal life.”

Christmas isn’t the only time he puts his pen to paper.

Wallace estimates he has written hundreds, probably thousands, of poems over the decades.

“You get one line in your head, and you go from there,” he said. “You can’t force it. Lots of times, I’ll write a poem in the time that it takes to write it down.”

For more than 40 years, Wallace worked for General Motors.

Before retiring in 2005, he did many jobs at GM, including putting hinges on doors and spot welding in the body shop. As he worked, he made up verses in his head and shared them with fellow workers.

Some asked him to write poetry for special occasions.

He also wrote poems for “the passing of friends from the old gang,” as he puts it.

“They want me to read them at funerals,” Wallace said, “but I can’t. I’m a sentimental guy. I cry too much.”

He wrote exuberant poems about the births of his grandkids, a sad poem about the Oklahoma City bombing and grateful poems to service people.

“Whenever I see veterans, I shake their hands,” Wallace said. “More people should remember them.”

His inspiration comes from everyday life and from the way he was raised.

“We were taught to have respect for each other,” Wallace said. “Nowadays, if one side doesn’t agree with the other, we can’t even be friends.”

He believes family is everything.

“I feel sorry for people whose families are not close,” Wallace said. “Family is more important than politics.”

Wallace describes his poetry as “stories of life” and calls himself “a guy who just happens to have the knack to put words together.”

His three children have collected his poetry into books, and Wallace has even recorded original poems.

“I’m not looking for any reward,” he said. “I just want to get the poems out there for people.”

Especially now in this year of darkness, he is eager to spread hope.

“We can weather this storm,” he said. “I want people to know Christmas is still out there. The virus doesn’t change that. It just makes it harder to see.”

Anna Marie Lux is a human interest columnist for The Gazette. Call her with ideas or comments at 608-755-8264, or email amarielux@gazettextra .com.

This year more than ever

we need real peace and joy

as we battle with this virus

that only wants to destroy.

It has stolen our freedom

and darkened our soul

it wants to control.

It has curtailed our movements

and kept us apart

taken our loved ones

and darkened our hearts.

We can’t hug each other

or even shake hands

to even make plans.

where has it gone?

Will it ever come back?

Where did we go wrong?

My friends, it’s still out there.

Nothing can stop it from coming

to both you and me.

For it’s our light in the darkness

that helps us to see

that goodness will triumph

and set our souls free.

So it’s with mixed emotions

and through a smile and a tear

that I wish you a Merry Christmas

and a much happier New Year.