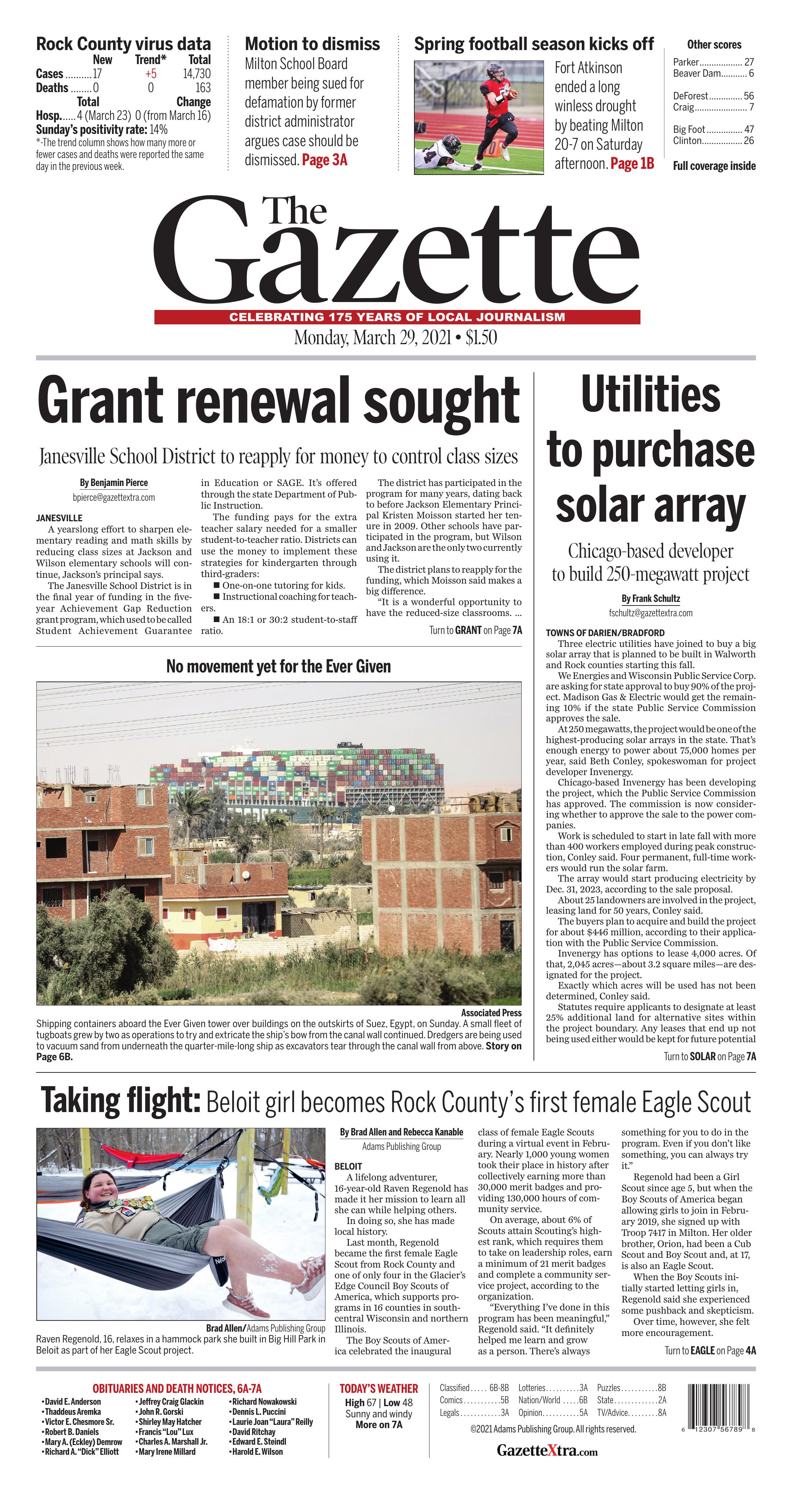 The Janesville School District is in the final year of funding in the five-year Achievement Gap Reduction grant program, which used to be called Student Achievement Guarantee in Education or SAGE. It’s offered through the state Department of Public Instruction.

The funding pays for the extra teacher salary needed for a smaller student-to-teacher ratio. Districts can use the money to implement these strategies for kindergarten through third-graders:

The district plans to reapply for the funding, which Moisson said makes a big difference.

“It is a wonderful opportunity to have the reduced-size classrooms. ... From 18 children to 24 children in a classroom, that is a huge difference,” Moisson said. “The interventions and the individualization that you can provide in the instructional areas for children is incredible.”

Moisson said the district also occasionally combines the effort with Title I state funding that allows an additional staff member, such as a paraprofessional or special education teacher, to reduce the student-to-teacher ratio further.

Jackson and Wilson also provide professional development for teachers through the grant, but the reduced class sizes are what drives the program’s success, Moisson said.

“I believe in the reduced-size classrooms. I think there’s less behavior problems. I think we get to provide more instructional support for students with less children in the classroom,” she said.

That success can be hard to track. Improvement in state test scores doesn’t paint an accurate picture for development in the schools, Moisson said, because a significant number of students don’t stay at the schools year over year because of financial issues.

Low-income families might move to a different school in the district or even another district, such as Beloit or Delavan-Darien, before their utilities are shut off, so they leave mid-year. About 150 students move in and out of Jackson Elementary each year, Moisson said.

In May 2019, 86% of kindergartners at Jackson scored in the 40th percentile in early literacy testing, and this year first-graders are closer to the 34th percentile.

“But that’s not necessarily the same first-graders because several of them are in charter or ARISE (Virtual Academy), several have moved away, so we’re not looking at the same kiddos,” Moisson explained. “If I were to go and match child to child, we probably have less than 50% of the same students in first grade than we had in last year’s kindergarten.”

The DPI and school district instead focus on individual year progression instead of year-over-year trends, which Moisson believes is much better than if the school didn’t use the grant program.

She said smaller classrooms are a big part of why the DPI has recognized Jackson for seven straight years—and they play an even bigger role in helping the district’s youngest learners.

“Early learning is critical for the success of students, and being able to provide them a great start in the beginning has been shown to provide all kinds of success for children far past our past elementary school,” Moisson said.

“And we know that when children are successful, and reading successfully and proficiently by third grade, that their lifelong success is much stronger, as well. So that is also true for math skills, and getting the foundation built from a very early age provides future success.”

Raven Regenold, 16, of Beloit stands in a hammock park she built in Big Hill Park in Beloit. She is the first female Eagle Scout from Rock County, and she hopes to set a positive example for other girls to get involved in Scouting.

Raven Regenold, 16, relaxes in a hammock park she built in Big Hill Park in Beloit as part of her Eagle Scout project.

A lifelong adventurer, 16-year-old Raven Regenold has made it her mission to learn all she can while helping others.

In doing so, she has made local history.

Last month, Regenold became the first female Eagle Scout from Rock County and one of only four in the Glacier’s Edge Council Boy Scouts of America, which supports programs in 16 counties in southcentral Wisconsin and northern Illinois.

The Boy Scouts of America celebrated the inaugural class of female Eagle Scouts during a virtual event in February. Nearly 1,000 young women took their place in history after collectively earning more than 30,000 merit badges and providing 130,000 hours of community service.

On average, about 6% of Scouts attain Scouting’s highest rank, which requires them to take on leadership roles, earn a minimum of 21 merit badges and complete a community service project, according to the organization.

“Everything I’ve done in this program has been meaningful,” Regenold said. “It definitely helped me learn and grow as a person. There’s always something for you to do in the program. Even if you don’t like something, you can always try it.”

Regenold had been a Girl Scout since age 5, but when the Boy Scouts of America began allowing girls to join in February 2019, she signed up with Troop 7417 in Milton. Her older brother, Orion, had been a Cub Scout and Boy Scout and, at 17, is also an Eagle Scout.

When the Boy Scouts initially started letting girls in, Regenold said she experienced some pushback and skepticism.

Over time, however, she felt more encouragement.

Regenold’s father, Thad Regenold, said the family tried to find a Boy Scout troop for girls in Beloit, but none existed. They thought about starting their own troop, but they didn’t have enough girls. Then they found Boy Scout Troop 417, which had a companion troop for girls, Troop 7417. Both are sponsored by Milton Seventh Day Baptist Church.

Thad was familiar with Troop 417 and longtime Milton volunteers Bill and Tammy Whitford.

Thad said the Milton group was accepting of the two families from Beloit. Troop 7417 currently has eight members from Beloit and Milton.

Melinda Dull, scoutmaster for Troop 7417 for the first year, said Regenold has always been a natural leader.

“I’m not surprised that she made Eagle rank,” Dull said. “It was a matter of when, not if. She has always stepped up to lead the other girls and showed lots of initiative getting the troop organized. I’m so very proud of her. Watch out world—she is going places.”

For her service project, Regenold focused on Beloit’s Big Hill Park, creating a cluster of hammocks that Boy Scouts can use in the future. The project was sponsored by Alliant Energy and Beloit Parks & Leisure Services.

Last summer, she hiked a total of 100 miles and bicycled another 200 miles during multiple excursions. Part of the effort involved a backpacking trip in southeastern Wisconsin around the Kettle Moraine State Forest.

“I definitely learned you do need breaks, especially if you’re backpacking in the summer. You have to make sure you’re prepared,” she said.

Focusing on outdoor activities has been an important outlet for Regenold during the pandemic. She’s earned 43 merit badges and is looking forward to earning more badges for welding, reading and journaling.

After earning each badge, Scouts are asked to write a reflection letter about the experience and brainstorm three careers that would use their new skill.

Regenold plans to pursue a career in pathology or become a doctor because she enjoys laboratory work and health care. Her father and her aunt Jodi Regenold Neubauer are both nurses.

“When you’re little and you’re growing up into this program, it’s really nice to know that you have this family,” she said. “They want to take every moment they can to get you to be what you want to be.”

Obituaries and death notices for March 29, 2021

Three electric utilities have joined to buy a big solar array that is planned to be built in Walworth and Rock counties starting this fall.

We Energies and Wisconsin Public Service Corp. are asking for state approval to buy 90% of the project. Madison Gas & Electric would get the remaining 10% if the state Public Service Commission approves the sale.

At 250 megawatts, the project would be one of the highest-producing solar arrays in the state. That’s enough energy to power about 75,000 homes per year, said Beth Conley, spokeswoman for project developer Invenergy.

Chicago-based Invenergy has been developing the project, which the Public Service Commission has approved. The commission is now considering whether to approve the sale to the power companies.

The array would start producing electricity by Dec. 31, 2023, according to the sale proposal.

About 25 landowners are involved in the project, leasing land for 50 years, Conley said.

The buyers plan to acquire and build the project for about $446 million, according to their application with the Public Service Commission. 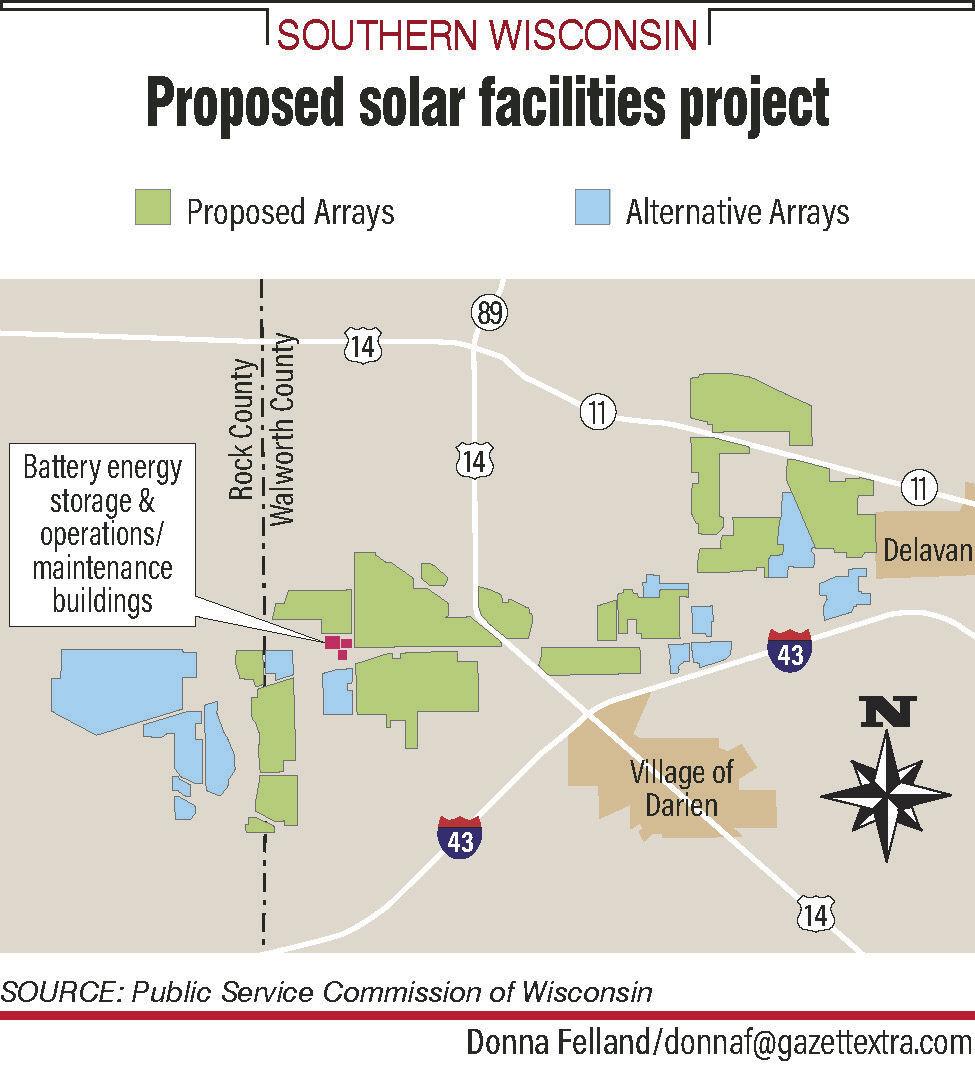 Invenergy has options to lease 4,000 acres. Of that, 2,045 acres—about 3.2 square miles—are designated for the project.

Exactly which acres will be used has not been determined, Conley said.

Statutes require applicants to designate at least 25% additional land for alternative sites within the project boundary. Any leases that end up not being used either would be kept for future potential projects or be terminated if they do not host solar facilities, Conley said.

Fields of solar panels, connected by underground cables, are planned to extend from the outskirts of Delavan across the town of Darien and into eastern Rock County.

The 600,000 to 850,000 photovoltaic panels are crystalline silicon enclosed in antireflective glass. They would stand in north-south rows, converting sunshine into electricity. Electric motors would tilt the panels throughout daylight hours, tracking the sun’s progress across the sky, project documents indicate.

Energy would be stored in an on-site battery facility, which would fill gaps in production when the sun is not shining.

This project could be “re-powered” after the equipment wears out, the sale document says.

The two major purchasers say they expect the array would save their customers nearly $1 billion over 20 years, based on an undisclosed rate analysis.

The state’s shared-revenue formula for utilities means a $1 million annual payment per year, with Walworth and Rock counties receiving 58% of the total and the towns of Darien and Bradford 42%, based on the proportion of megawatts built in each county and town.

The proposal indicates Invenergy would operate the array for the power companies.

Invenergy says it is “committed to developing positive relationships with communities where projects are located by hiring approximately 70% of (operations and maintenance) personnel locally” and contributing volunteer time and donating money to local organizations and events.

The development is part of a trend in Wisconsin and across the country as utilities abandon old fossil-fuel burning plants in an effort to reduce their carbon footprints. Steep reductions in the cost of solar panels and federal government incentives make such projects competitive with fossil fuel plants, according to the application.

“Though energy is currently available in the market at relatively low cost, the project will provide a valuable hedge against the potential for higher energy costs in the future, particularly during the peak summer hours, when Darien is expected to be generating energy at or near their stated nameplate capacity,” according to the sale proposal.

The Darien solar area is described as rolling hills with “relatively flat” agricultural and developed areas, according to Invenergy’s proposal to the commission.

The three power companies have also joined to buy two other Invenergy solar arrays, the 300-megawatt facility known as Badger Hollow in Iowa County and a 250-megawatt facility in the town of Paris in Kenosha County, according to the sale proposal. 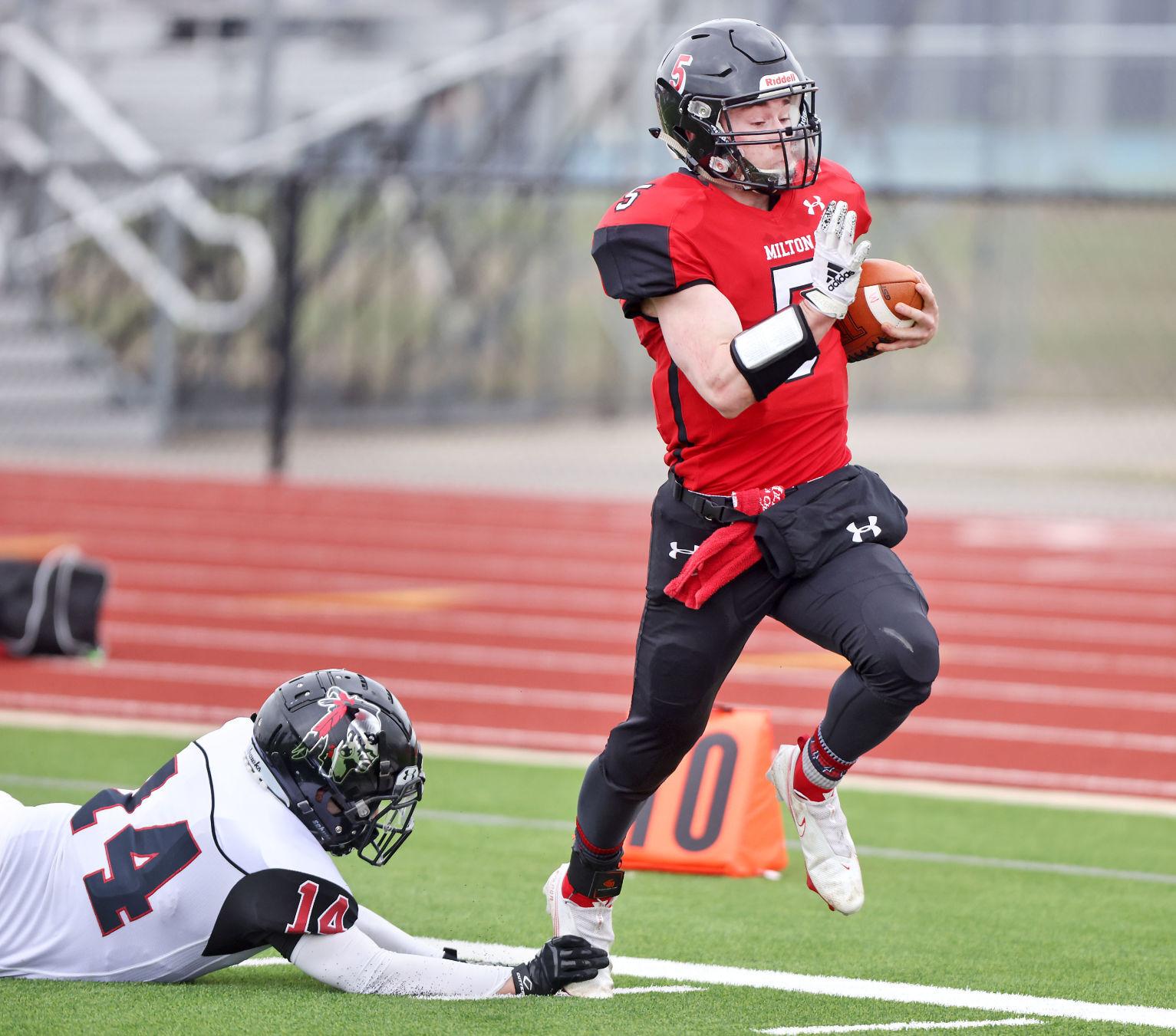 Milton’s Evan Jordahl avoids one last tackle attempt as he rushes for a touchdown during their game against Fort Atkinson at Big Foot High School on Saturday, March 27.