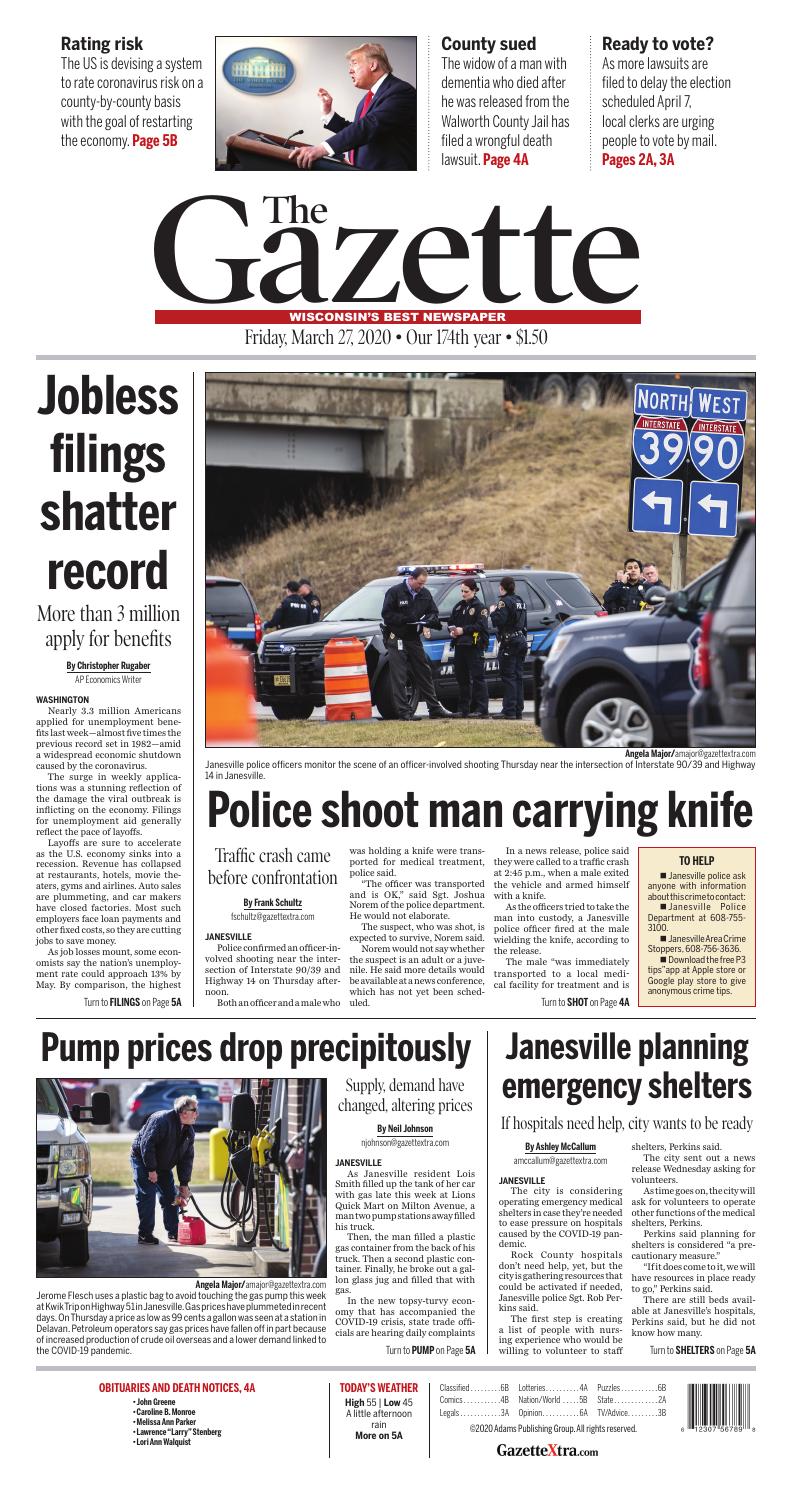 Janesville police officers monitor the scene of an officer-involved shooting Thursday near the intersection of Interstate 90/39 and Highway 14 in Janesville.

People speak to officers on the scene of an officer-involved shooting in Janesvlile on Thursday.

Police confirmed an officer-involved shooting near the intersection of Interstate 90/39 and Highway 14 on Thursday afternoon.

Both an officer and a male who was holding a knife were transported for medical treatment, police said.

“The officer was transported and is OK,” said Sgt. Joshua Norem of the police department. He would not elaborate.

The suspect, who was shot, is expected to survive, Norem said.

Norem would not say whether the suspect is an adult or a juvenile. He said more details would be available at a news conference, which has not yet been scheduled.

In a news release, police said they were called to a traffic crash at 2:45 p.m., when a male exited the vehicle and armed himself with a knife. 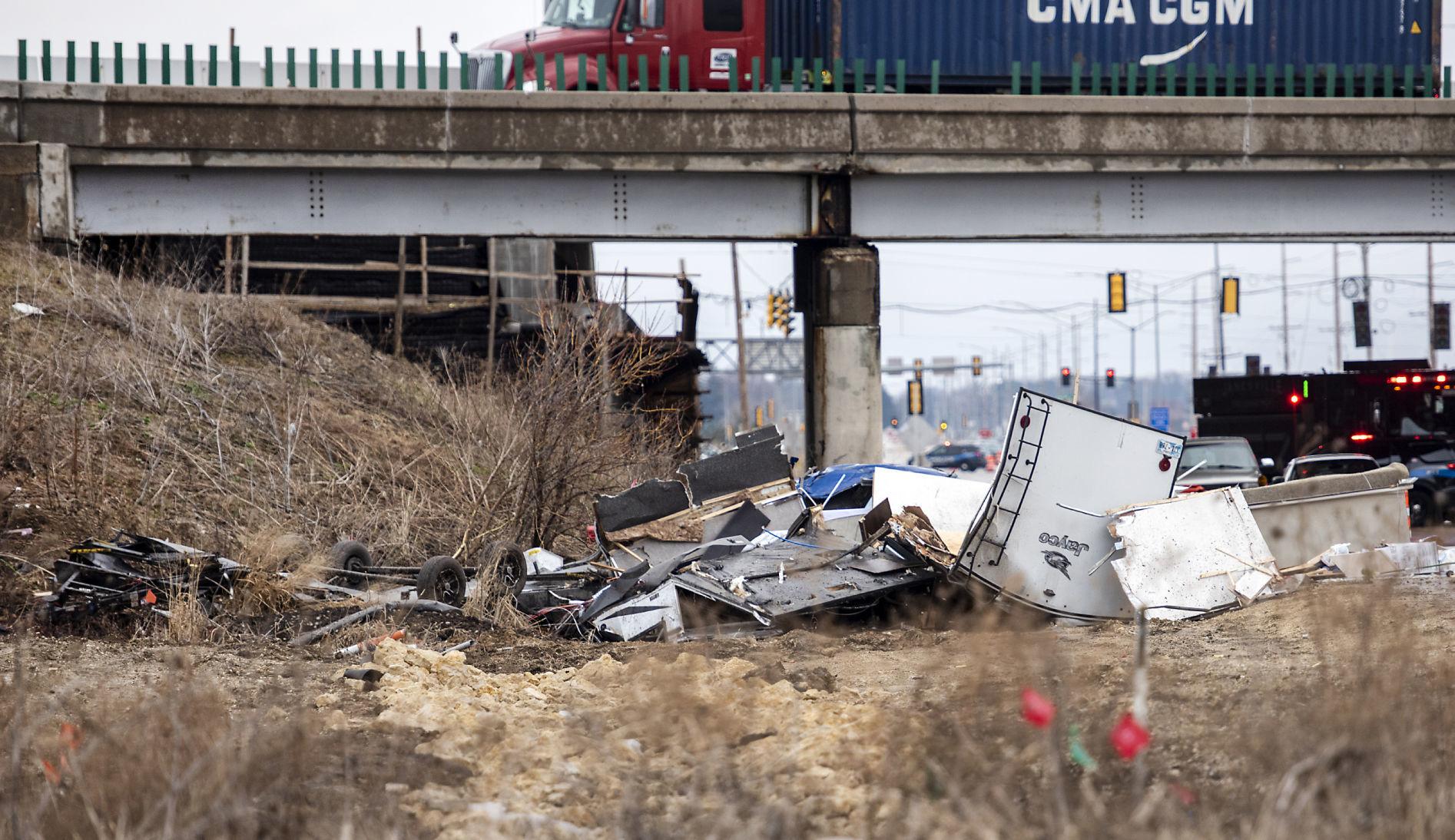 This wreckage, which appears to be the remains of a recreational vehicle, was at the scene of an officer-involved shooting Thursday near the intersection of Interstate 90/39 and Highway 14 in Janesville.

As the officers tried to take the man into custody, a Janesville police officer fired at the male wielding the knife, according to the release.

Janesville resident Candi Rodriguez was at the drive-thru of a nearby Taco Bell restaurant when she saw police cars speeding past and went to see what was happening.

From a parking lot perhaps 60 to 80 feet away, Rodriguez saw a man, maybe in his 20s, on the embankment that leads up to Interstate 90/39, she said. Police were below him.

“He had something in his hands, but I couldn’t see what, exactly,” she said.

The man looked as though he was trying to climb up the steep embankment to Interstate 90/39.

Rodriguez said tire marks made her think the crash had occurred on the Interstate.

Rodriguez thought one officer had a Taser in his hand. She could hear what sounded like officers yelling.

Traffic streamed by on Highway 14 between Rodriguez and the police as the incident played out.

Then she heard two gunshots in quick succession, she said. A short time later, she saw the man put in an ambulance.

A man wearing the insignia of the state Division of of Criminal Investigation was seen at the scene later. The DCI investigates officer-involved shootings in the state.

Typically, local police discuss the incident, and then officials remain silent until DCI issues its findings to the district attorney, who decides what happens next.

In the Dec. 10 fatal shooting of Montay S. Penning, 23, in Beloit, Rock County District Attorney David O’Leary declared on Feb. 7 that the shooting by Beloit police was justified.

Janesville police ask anyone with information about this crime to contact:

Jerome Flesch uses a plastic bag to avoid touching the gas pump this week at Kwik Trip on Highway 51 in Janesville. Gas prices have plummeted in recent days. On Thursday a price as low as 99 cents a gallon was seen at a station in Delavan. Petroleum operators say gas prices have fallen off in part because of increased production of crude oil overseas and a lower demand linked to the COVID-19 pandemic.

A sign shows gas prices Wednesday at Kwik Trip on Highway 51 in Janesville.

As Janesville resident Lois Smith filled up the tank of her car with gas late this week at Lions Quick Mart on Milton Avenue, a man two pump stations away filled his truck.

Then, the man filled a plastic gas container from the back of his truck. Then a second plastic container. Finally, he broke out a gallon glass jug and filled that with gas.

In the new topsy-turvy economy that has accompanied the COVID-19 crisis, state trade officials are hearing daily complaints over price gouging at retail stores. One price that isn’t inflated right now: that of gasoline.

As of Thursday afternoon, the price at a Mobil station in Delavan had plummeted to 99 cents a gallon. A gallon at a Janesville Citgo station would set you back just $1.28, according to GasBuddy.com.

In Janesvsille, that’s a dip of 20 cents per gallon compared with Wednesday and a 40-cent falloff from earlier this week.

They’re the lowest prices stations have posted in years, and local gasoline merchants say they’re a function of lower demand and increased production of crude oil in Saudi Arabia and Russia.

The dip in retail unleaded prices is an immediate help to consumers grappling with new economic uncertainties during the coronavirus pandemic, but it presents a challenge for gas stations and convenience stores that are weathering virus-related shutdowns and an economic storm that has led more than 3 million Americans to file for unemployment benefits.

As a consumer, Smith called the plummeting gas prices “daily relief from all of everything we’re dealing with right now with this pandemic.”

“With less driving because of COVID-19 and cheaper gas, a tankful sure goes a long way now,” she said.

But Janesville gas station operator Jim Campbell sees the lower prices as an ominous signal. How ominous? He said he doesn’t yet know.

He pointed out that a person’s gasoline dollar lasts longer when the per-gallon price is low—$15 now might fill a tank instead of only a portion of it—which means fewer trips to the gas station. And that can mean a drop in sales of food and other convenience store products.

That dynamic combined with the state-mandated health shutdown that has left thousands homebound and locked out of their daily driving and spending routines could spell “double trouble” for gas stations, Campbell said, even though they are “essential” businesses under the governor’s safer-at-home order. Gas stations make up a large portion of the overall U.S. economy.

The length of the shutdown and how long gas prices stay low will determine the ultimate impact on stations.

“The trouble is nobody knows anything for sure. What’s going to happen going forward with reduction of sales because of everybody is staying home, we don’t know. We might not know for another month,” Campbell said.

He said much of the supply for local gas stations comes from “fuel farms”—storage stations in Madison and Milwaukee—that get gas piped in from other places.

It’s unclear whether prices might shift soon and in which direction, Campbell indicated.

On Thursday, Milton ethanol producer, United Ethanol, rebuffed questions about how plummeting fuel prices could affect local production of ethanol that is used as a gasoline additive.

Officials at both the Milton ethanol plant and at United Ethanol’s corporate headquarters in Beaver Dam declined comment Thursday afternoon.

Milton City Administrator Al Hulick said on Thursday he was unaware of any changes in production at the Milton plant that would be tied to linked to gas prices, the COVID-19 crisis or other factors.

Dr. Preyanshu Parekh, left, and medical assistant Lindsay McCann speak with an individual suffering from possible COVID-19 symptoms during a drive-thru screening at an alternate site on the campus of SSM Health St. Mary’s Hospital-Janesville.

The city is considering operating emergency medical shelters in case they’re needed to ease pressure on hospitals caused by the COVID-19 pandemic.

Rock County hospitals don’t need help, yet, but the city is gathering resources that could be activated if needed, Janesville police Sgt. Rob Perkins said.

The first step is creating a list of people with nursing experience who would be willing to volunteer to staff shelters, Perkins said.

The city sent out a news release Wednesday asking for volunteers.

As time goes on, the city will ask for volunteers to operate other functions of the medical shelters, Perkins.

Perkins said planning for shelters is considered “a precautionary measure.”

“If it does come to it, we will have resources in place ready to go,” Perkins said.

The health department urges residents to continue staying home because it will take time for the impact of social distancing to be seen.

There are still beds available at Janesville’s hospitals, Perkins said, but he did not know how many.

“We (Mercyhealth) have plenty of capacity at this time,” said Barb Bortner, vice-president at Mercyhealth in an email to The Gazette.

Mercyhealth is working with partners across the county to determine thresholds and resources needed to support the county’s health system structure, Bortner said.

Days before the call for volunteer nurses, Mercyhealth announced it placed an undisclosed number of employees on unpaid furlough.

Bortner said Mercyhealth has a pool of employees “who are already familiar with our structure and are available if a surge situation arises.”

SSM Health St. Mary’s Hospital-Janesville is a 50-bed hospital committed to keeping the community safe, according to a statement from a hospital spokeswoman.

“We are currently working very closely with the Rock County Emergency Operations Center (EOC) to create procedures that address needs that could arise during the COVID-19 public health emergency,” SSM Health spokeswoman Erica Mathis said in an email to The Gazette.

Mathis did not address questions on the current capacity at St. Mary’s.

Here is how medical shelters could work:

The city is considering two kinds of shelters—decompression and hospital surge, Perkins said.

A decompression shelter would be used to ease pressure on hospitals by taking in patients who need medical attention but are not in need of intensive care, freeing up space for high-risk and high-need patients.

A hospital surge shelter would be used to treat patients who need extensive medical care if there is not enough room at the hospitals, Perkins said.

These shelters would be hosted in existing buildings. The city is exploring public and private options for locations, Perkins said.

Ideal buildings would be large and come with the ability to provide medical care, food distribution, showers, kitchens, bathrooms and other amenities, Perkins said.

Plans to prepare emergency medical shelters have existed since the city opened its emergency operations center two weeks ago and was not influenced by any event or change, Perkins said.

Officials are researching how much protective, medical and hygiene equipment would be needed to operate a shelter, Perkins said.

People with nursing experience willing to be placed on a list of potential volunteers can call the Janesville Community Hotline at 608-373-6027. The following information will be required: