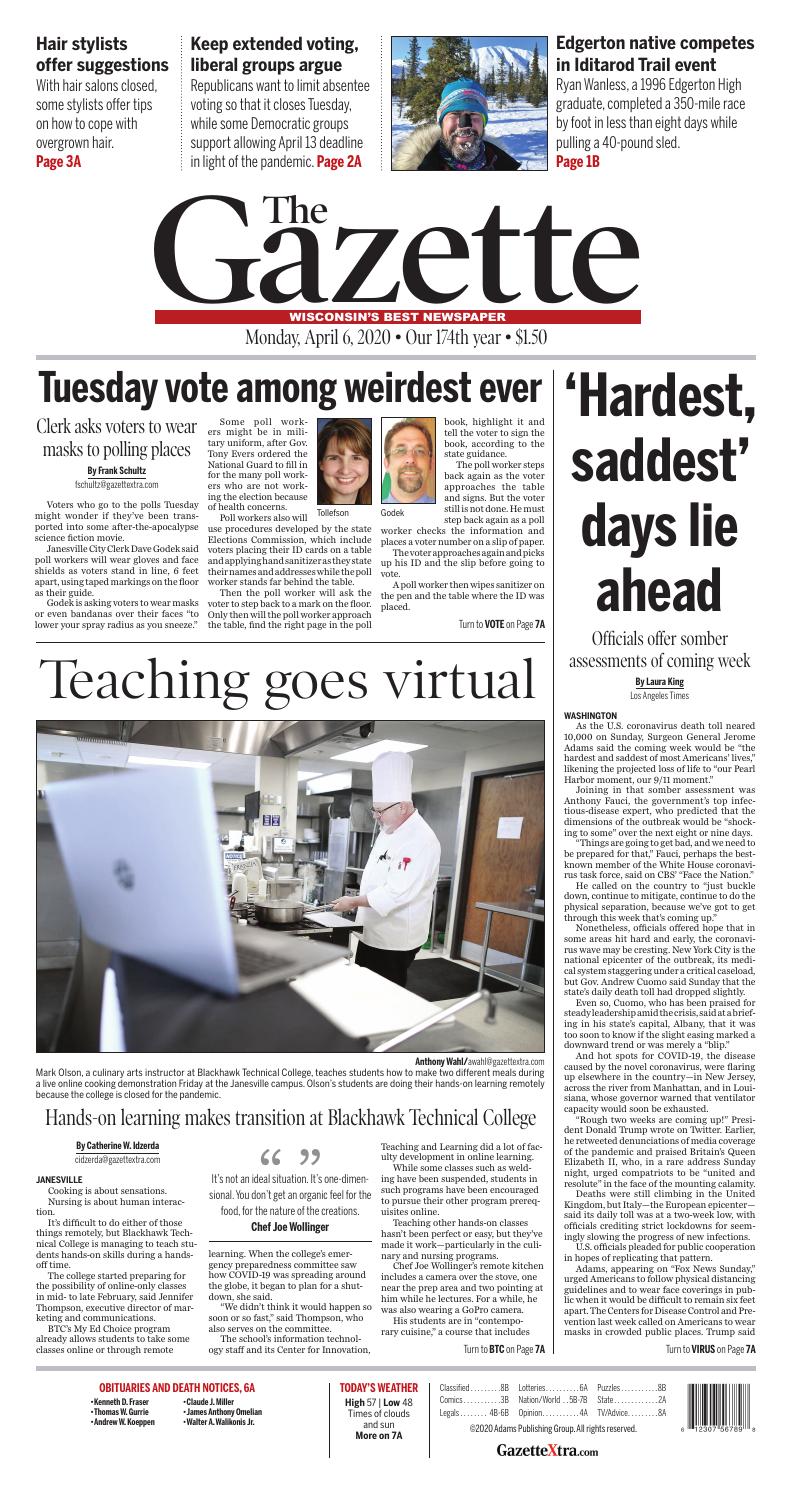 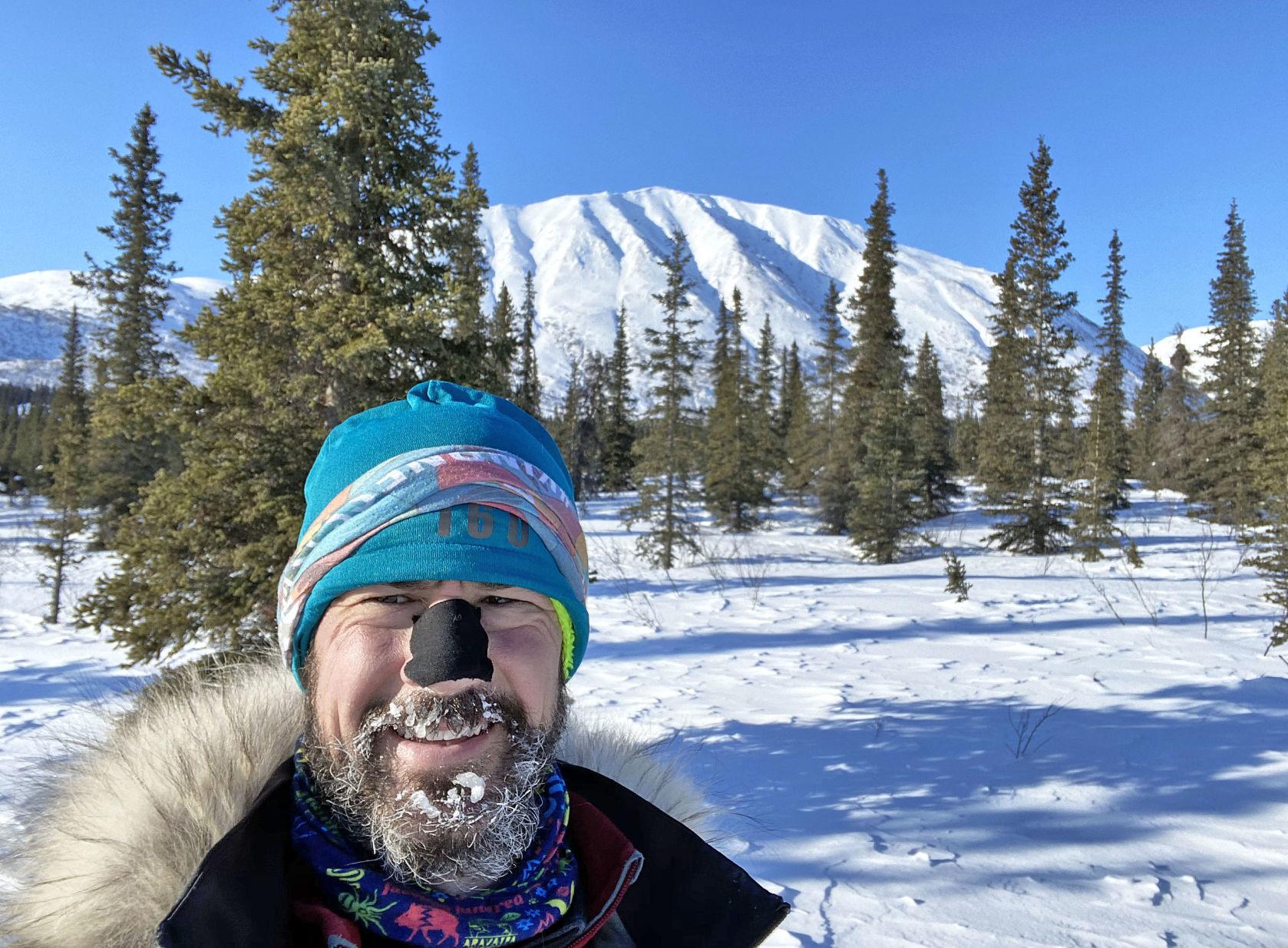 Ryan Wanless, a 1996 Edgerton High graduate, poses during the Iditarod Trail Invitational in Alaska in March.

Coronavirus
Tuesday's vote to be among weirdest ever
By Frank Schultz fschultz@gazettextra.com

Voters who go to the polls Tuesday might wonder if they’ve been transported into some after-the-apocalypse science fiction movie.

Godek is asking voters to wear masks or even bandanas over their faces “to lower your spray radius as you sneeze.”

Some poll workers might be in military uniform, after Gov. Tony Evers ordered the National Guard to fill in for the many poll workers who are not working the election because of health concerns.

Poll workers also will use procedures developed by the state Elections Commission, which include voters placing their ID cards on a table and applying hand sanitizer as they state their names and addresses while the poll worker stands far behind the table.

The voter approaches again and picks up his ID and the slip before going to vote.

A poll worker then wipes sanitizer on the pen and the table where the ID was placed.

Yes, lines could get long as this procedure plays out.

Procedures may differ, depending on local conditions and decisions of local clerks. In Milton City Hall, transparent shower curtains will be hanging from the ceiling, with the poll book being passed through an opening, for example.

Voters are encouraged to bring their own pens—black or blue ballpoint is best—so they don’t give or receive the coronavirus with a publicly used pen.

Here are some of the more standard rules for elections:

In Janesville, voters who normally vote at New Life Assembly of God, the Church of Jesus Christ of Latter-day Saints, St. Mark’s Church, First Lutheran Church or Blain Supply will vote instead at the old Sears store in the Janesville Mall, 2500 Milton Ave. Those who vote at the Rock County Job Center, Mount Calvary Church or Faith Lutheran Church will vote at the Rock County Job Center, 1900 Center Ave. Those who vote at Hedberg Public Library or City Hall will continue to vote at those places.

Elsewhere in Janesville, those who vote at Hedberg Public Library or City Hall will continue to vote at those places.

In the city of Beloit, only one poll will be open, at City Hall, 100 State St.

In the town of Beloit, the only poll will be at Fire Station No. 2, 1143 Inman Parkway.

The deadline for voters to get absentee ballots to local clerks has been extended, to 4 p.m. April 13. Normally, the deadline is 8 p.m. on Election Day.

The election includes the presidential primaries for Republicans and Democrats. It also includes a hotly contested state Supreme Court race and a host of local elections.

All the Democratic presidential candidates who qualified will also be on the ballot. Voters can choose any one of them, but all have dropped out except Joe Biden and Bernie Sanders.

The ballot includes a statewide referendum vote to change the state Constitution to give crime victims more rights and a Rock County advisory referendum in which a “yes” vote endorses a nonpartisan process for drawing legislative district lines.

Mark Olson pulls a pan from the oven while making two different meals during a live online cooking demonstration Friday at Blackhawk Technical College in Janesville.

Cooking is about sensations.

Nursing is about human interaction.

It’s difficult to do either of those things remotely, but Blackhawk Technical College is managing to teach students hands-on skills during a hands-off time.

The college started preparing for the possibility of online-only classes in mid- to late February, said Jennifer Thompson, executive director of marketing and communications. 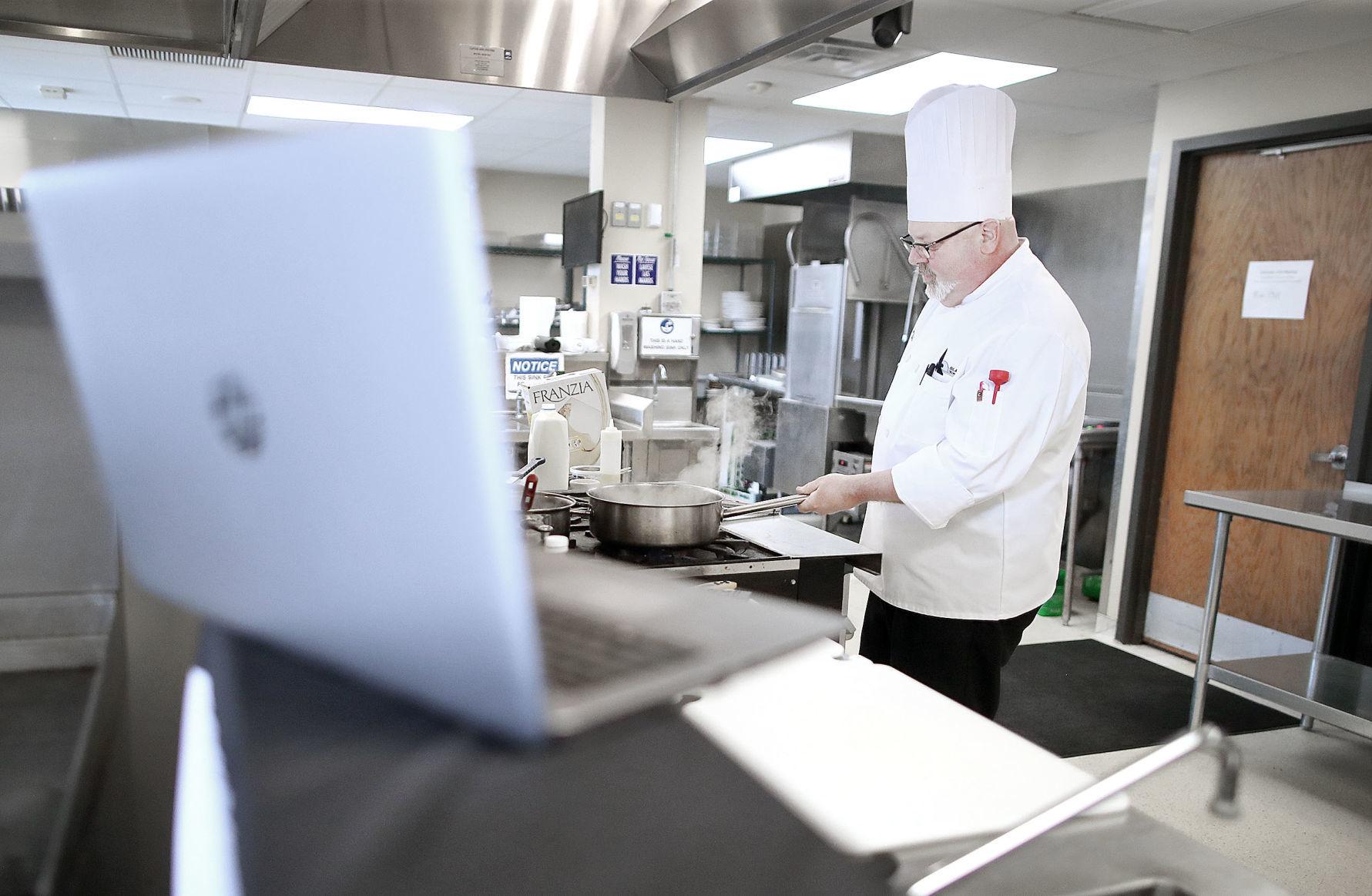 Mark Olson, a culinary arts instructor at Blackhawk Technical College, teaches students how to make two different meals during a live online cooking demonstration Friday at the Janesville campus. Olson’s students are doing their hands-on learning remotely because the college is closed for the pandemic.

BTC’s My Ed Choice program already allows students to take some classes online or through remote learning. When the college’s emergency preparedness committee saw how COVID-19 was spreading around the globe, it began to plan for a shutdown, she said.

“We didn’t think it would happen so soon or so fast,” said Thompson, who also serves on the committee.

The school’s information technology staff and its Center for Innovation, Teaching and Learning did a lot of faculty development in online learning.

While some classes such as welding have been suspended, students in such programs have been encouraged to pursue their other program prerequisites online. 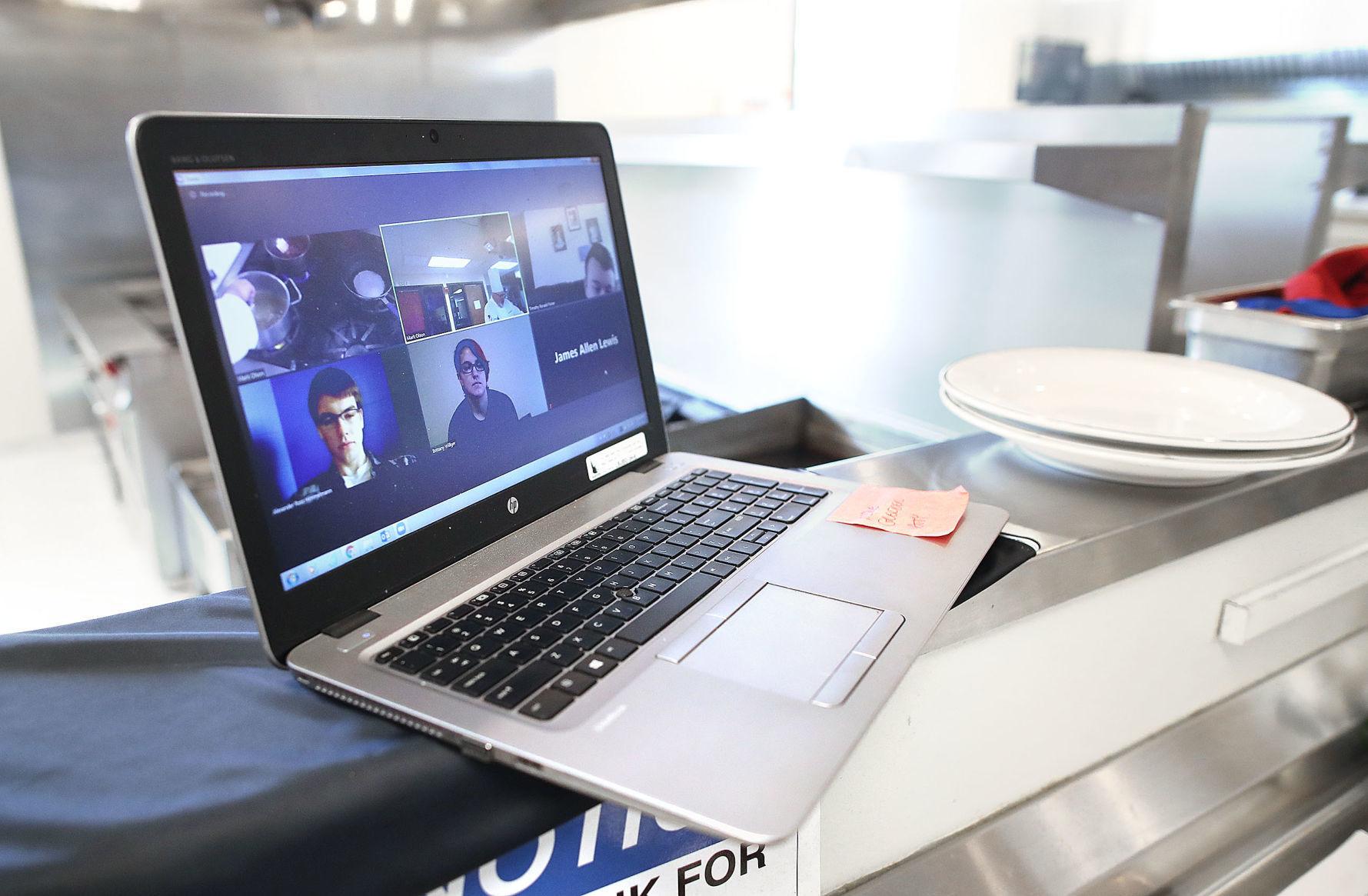 Teaching other hands-on classes hasn’t been perfect or easy, but they’ve made it work—particularly in the culinary and nursing programs.

Chef Joe Wollinger’s remote kitchen includes a camera over the stove, one near the prep area and two pointing at him while he lectures. For a while, he was also wearing a GoPro camera.

His students are in “contemporary cuisine,” a course that includes researching, planning and preparing a gourmet luncheon for a select group of ticketholders.

Students pick up a basket of food at the college and do their work at home, documenting each step. When a student is close to plating the meal, everyone joins in a Zoom videoconference meeting.

“It’s not an ideal situation,” Wollinger said. “It’s one-dimensional. You don’t get an organic feel for the food, for the nature of the creations. They’re not smelling it, not tasting it.”

Chef Mark Olson agreed. He’s teaching food science from an empty classroom at the college with two cameras pointing at him.

“It’s not difficult, but it certainly is a change,” Olson said.

It takes twice as long to prepare for class.

“You have to have everything ready, down to the tasting spoons,” Olson said. “There’s no editing.” 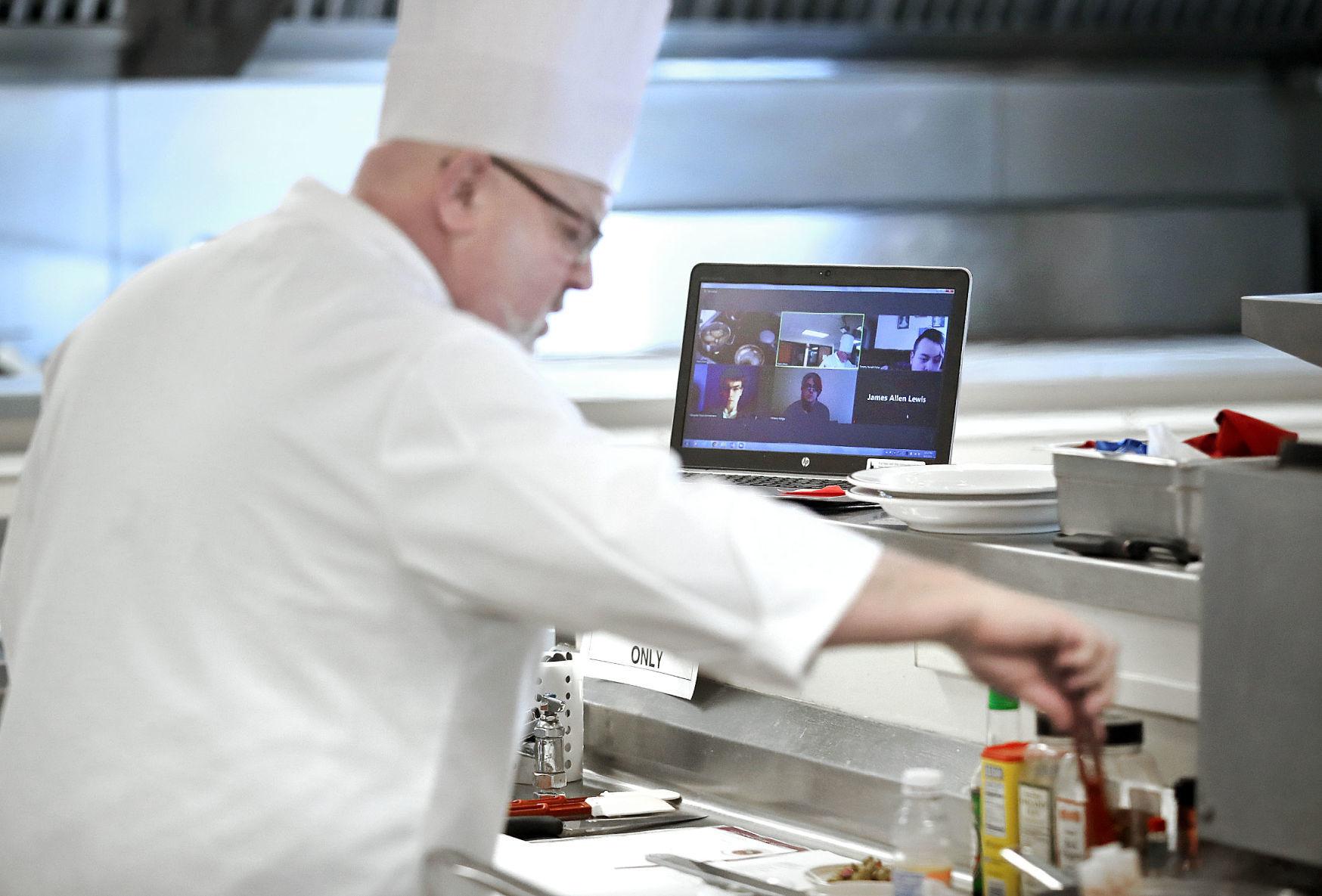 Culinary arts instructor Mark Olson talks to his students, who are seen on a monitor, as he cooks during an online class at Blackhawk Technical College on Friday.

It is more difficult for students, too. They’re accustomed to the class interactions, the atmosphere in the kitchen and classroom, and smell and taste of the food. Now they’re just looking at a screen.

Wollinger said the students have been “wonderful.”

“Because of the gravity of the situation, they understand that this is the way it has to be,” he said.

Nursing instructor Patty Aronson has been doing clinicals online. Students already have spent eight weeks in health care settings, and many of them are already nursing assistants. But performing a newborn baby assessment without an actual newborn—well, that’s a challenge.

Aronson instructed students to send in photos of their own newborns.

That way, they can assess skin color, symmetry of the face, position of the ears and a variety of other markers of health.

“I’ve tried to make it as interactive as possible,” Aronson said.

She’s had students listen to recordings of newborns’ respiratory rates and heart rates, which are faster than adults and sometimes difficult to count.

During the Zoom meetings, Aronson also assesses the way nursing students interact with each other.

Many of her students will take national board exams to become licensed practical nurses at the end of the semester.

She’s impressed with their willingness to enter what is now a dangerous profession.

“I think it’s made them more driven,” Aronson said. “They all want to help, and they’re so eager to keep going.”

Thompson, too, has been impressed with the efforts of students and staff.

“If there’s a silver lining to this, it’s been watching faculty and staff really rally for the students,” she said. 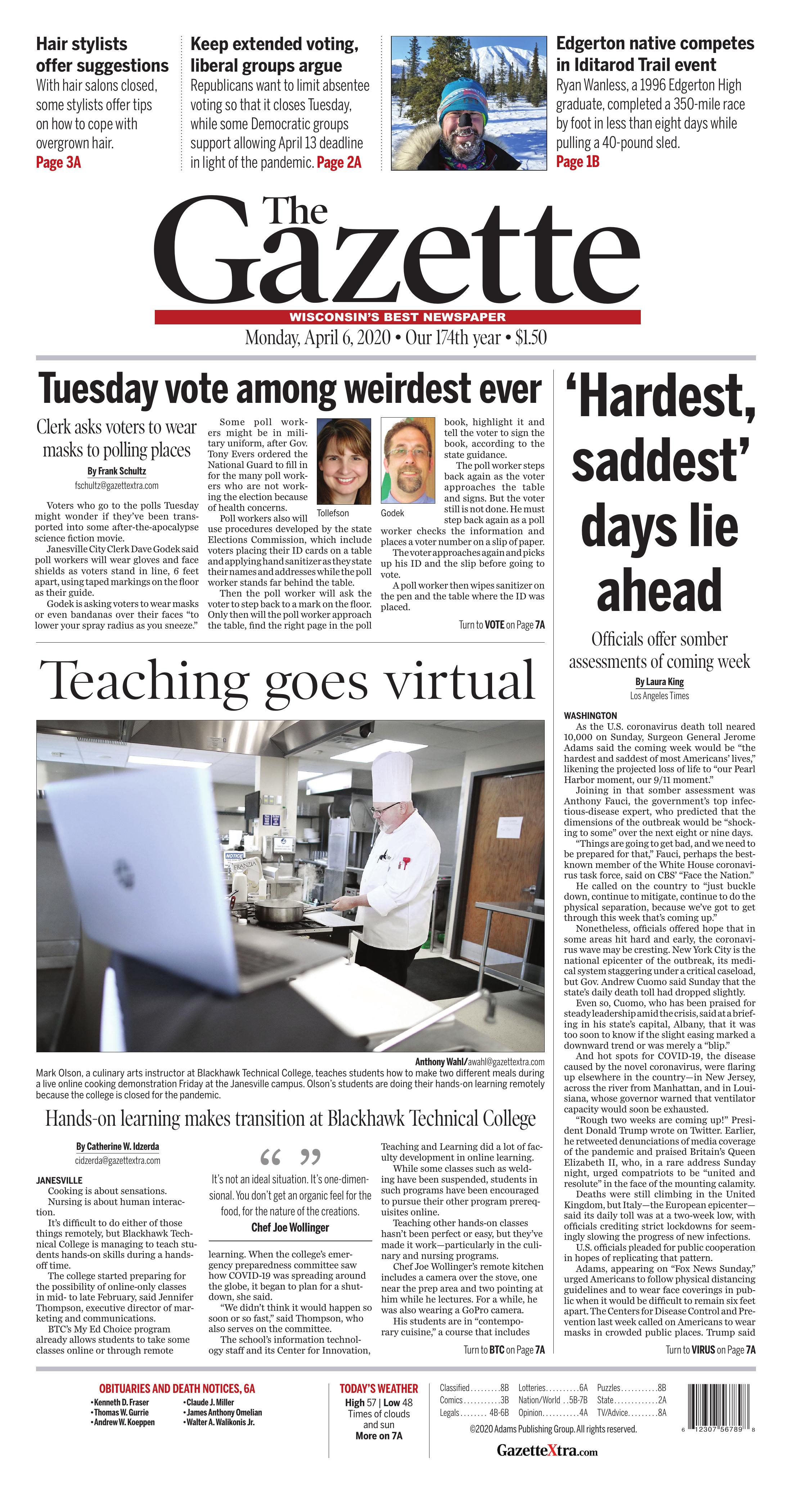