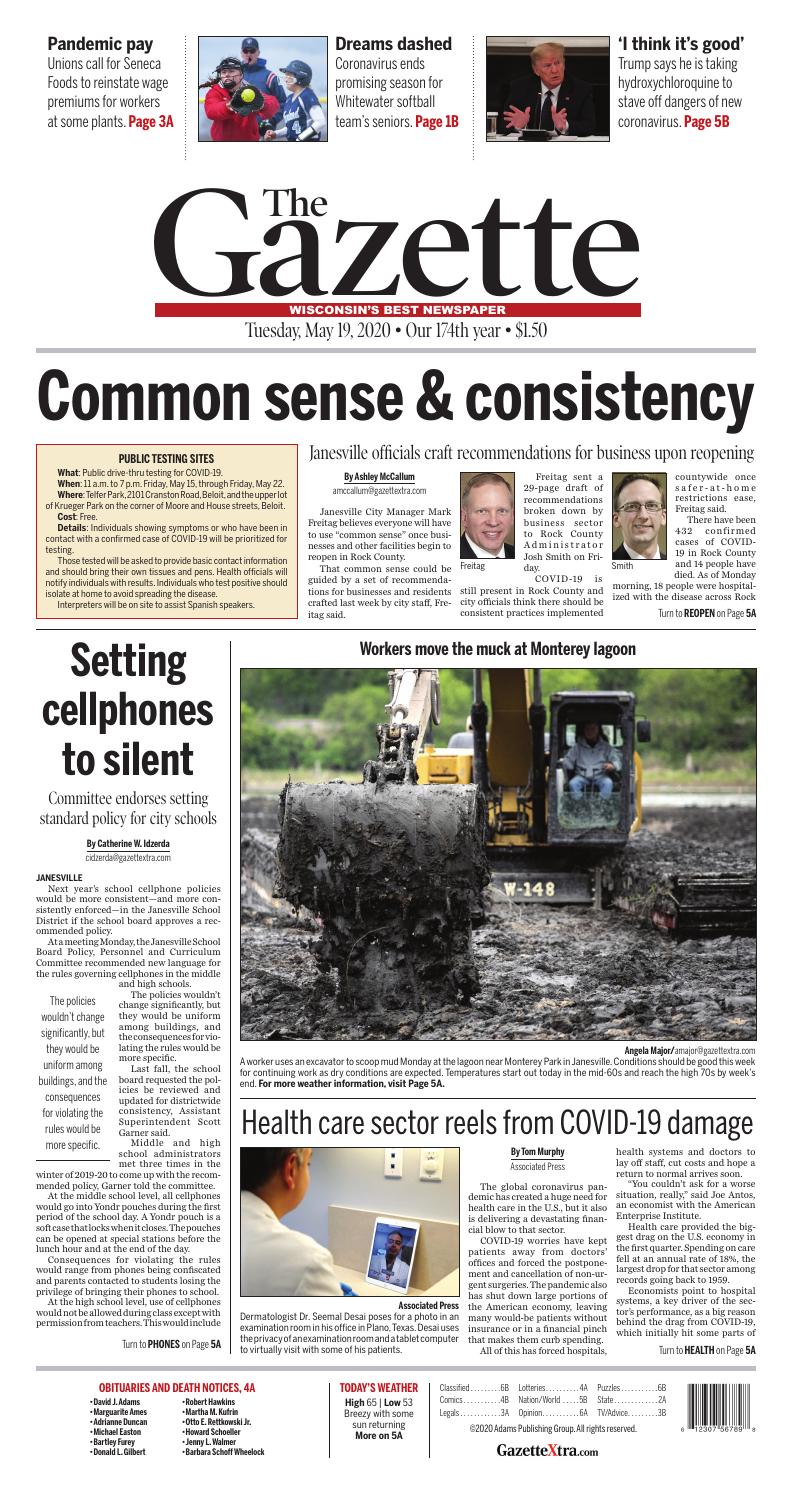 People stand and dine outside of Speedo’s Harborside Pub and Grill in downtown Lake Geneva. Walworth County officials have chosen not to implement a safer-at-home order after the statewide order was struck down last week.

Janesville City Manager Mark Freitag believes everyone will have to use “common sense” once businesses and other facilities begin to reopen in Rock County.

That common sense could be guided by a set of recommendations for businesses and residents crafted last week by city staff, Freitag said.

Freitag sent a 29-page draft of recommendations broken down by business sector to Rock County Administrator Josh Smith on Friday.

There have been 432 confirmed cases of COVID-19 in Rock County and 14 people have died. As of Monday morning, 18 people were hospitalized with the disease across Rock County’s four hospitals, according to a news release from the county.

Free public testing sites in Beloit will have a “significant impact” on the number of cases the county reports in the coming weeks, according to the release.

Last week, the state Supreme Court struck down a statewide safer-at-home order that required many businesses to limit operations or shutter entirely.

Rock County’s safer-at-home order is set to expire May 26. Officials have not said publicly whether the order could be extended or modified.

Janesville could enact its own emergency orders as long as they don’t interfere with existing county orders. City officials have so far refrained from doing so.

The city’s recommendations for businesses, which are subject to change, include a comprehensive set of guidelines across the following businesses:

Some recommendations are consistent across all sectors: wearing of masks for employees and patrons, enhanced cleaning procedures, prohibiting employees from working while sick, using single-use equipment when possible, keeping people 6 feet apart, and more.

Other recommendations are tailored for specific sectors.

For example, the city’s guidelines recommend hair and nail salons have clients wait in their cars until a chair is open and has been disinfected.

Workers at fitness facilities are advised not to host group fitness classes if physical distancing cannot be maintained.

Gyms should limit sauna and shower uses for one person at a time, according to the recommendations.

Gym members should plan workouts ahead of time to ensure they get in and out as soon as they can, according to the recommendations.

Hotel buffets and fitness centers should stay shut down, the guidelines say.

Systems for collecting payment ahead of time are recommended across several sectors to avoid cash handling.

What: Public drive-thru testing for COVID-19.

Where: Telfer Park, 2101 Cranston Road, Beloit, and the upper lot of Krueger Park on the corner of Moore and House streets, Beloit.

Details: Individuals showing symptoms or who have been in contact with a confirmed case of COVID-19 will be prioritized for testing.

Those tested will be asked to provide basic contact information and should bring their own tissues and pens.

Health officials will notify individuals with results. Individuals who test positive should isolate at home to avoid spreading the disease.

Interpreters will be on site to assist Spanish speakers. 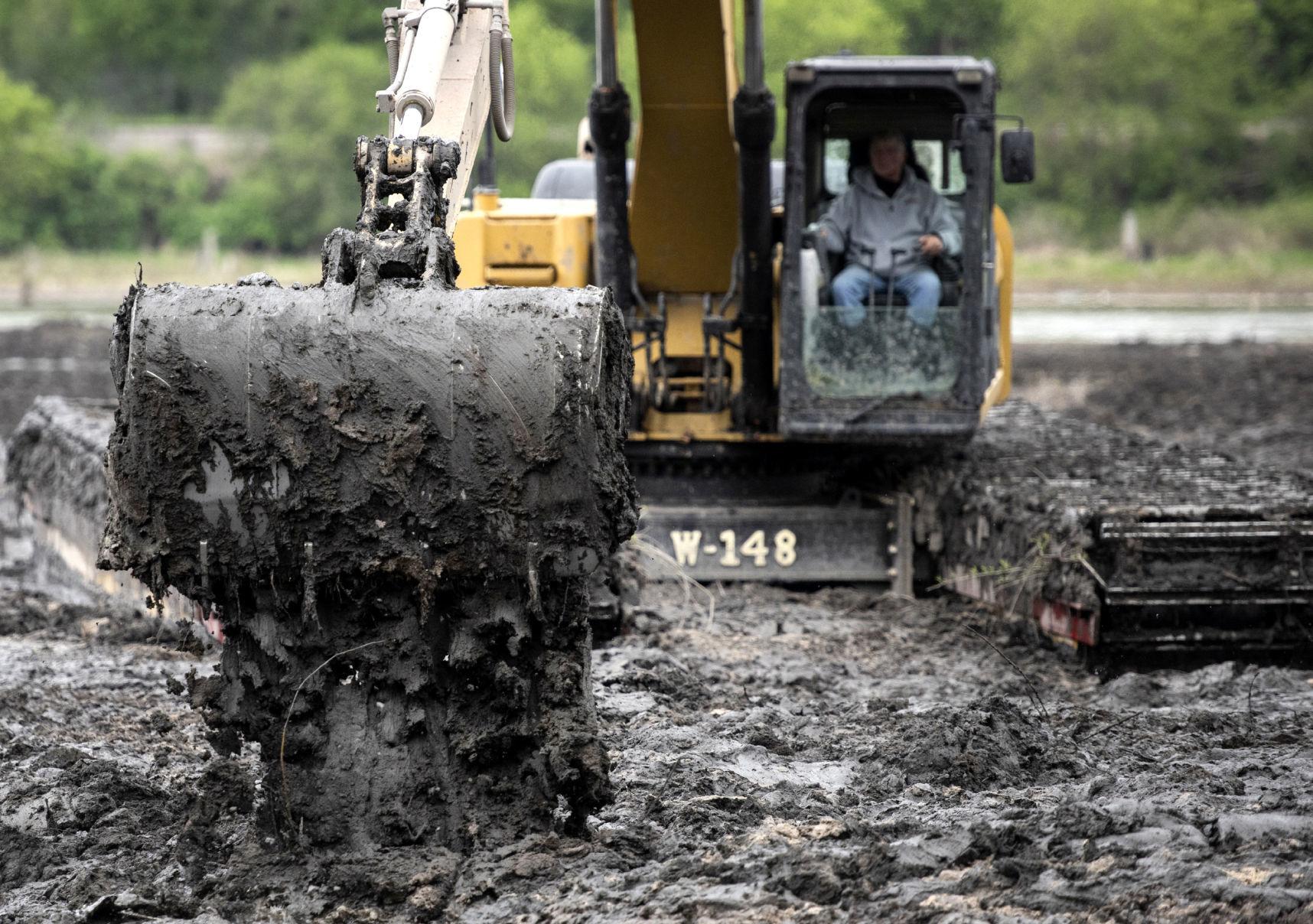 A worker uses an excavator to scoop mud Monday, May 18, 2020, at the lagoon near Monterey Park in Janesville.

Dermatologist Dr. Seemal Desai poses for a photo in the waiting room of his office in Plano, Texas, Thursday, May 7, 2020. Desai said that at this time of day, early afternoon, his office would typically be filled with several patients. (AP Photo/Tony Gutierrez)

Dermatologist Dr. Seemal Desai poses for a photo in the waiting room of his office in Plano, Texas, Thursday, May 7, 2020. Desai said that they have posted signs on seating that would help patients adhere to social distancing, but on this day in an early afternoon, his office is empty of patients. (AP Photo/Tony Gutierrez)

The global coronavirus pandemic has created a huge need for health care in the U.S., but it also is delivering a devastating financial blow to that sector.

COVID-19 worries have kept patients away from doctors’ offices and forced the postponement and cancellation of non-urgent surgeries. The pandemic also has shut down large portions of the American economy, leaving many would-be patients without insurance or in a financial pinch that makes them curb spending.

All of this has forced hospitals, health systems and doctors to lay off staff, cut costs and hope a return to normal arrives soon.

“You couldn’t ask for a worse situation, really,” said Joe Antos, an economist with the American Enterprise Institute.

Health care provided the biggest drag on the U.S. economy in the first quarter. Spending on care fell at an annual rate of 18%, the largest drop for that sector among records going back to 1959.

Economists point to hospital systems, a key driver of the sector’s performance, as a big reason behind the drag from COVID-19, which initially hit some parts of the sector more intensely than others.

The nation’s largest hospital chain, HCA Healthcare, said its hospital-based outpatient surgery totals for last month were down about 70% through late April.

In many cases, hospitals that lose those profitable surgeries are gaining COVID-19 patients—and losing money on them. Those patients might require hospitals to expand intensive care units, spend more on infection control and stock up on gowns and masks, among other items.

The American Hospital Association estimated in a recent report that the nation’s hospitals and health systems will collectively lose more than $36 billion from March to June treating hospitalized COVID-19 patients.

When adding factors like lost revenue from postponed surgeries, the total balloons to more than $200 billion, the association said. Congress has set aside about $175 billion so far to help hospitals and other care providers, but the hospital association says more assistance is needed.

From the doctor’s office, the view also is bleak.

He started seeing patients over the internet with help from smartphone or tablet cameras. But that created fresh problems. Desai said some patients don’t have the technology to do online visits. Others hesitate because they aren’t sure their insurance will cover them.

Only about half the patients who were offered a telemedicine visit actually did one.

“You would think my volume would be shooting through the roof and people would be clamoring for it, but it’s completely the opposite,” Desai said.

The dermatologist cut expenses, including marketing, and he has reduced some employee hours.

Nationally, the health care sector shed nearly 1.5 million jobs from February to April, or about 9% of its total, according to the federal Bureau of Labor Statistics.

A big chunk of that came from dentist offices. Preliminary data shows that employee totals for that slice of the sector sank by more than 500,000, or 53%.

Overall economic growth, as measured by the gross domestic product, fell at an annual rate of 4.8% in the January-March quarter even though the severe impact of the virus was only felt in the last couple of weeks of March.

The current quarter is expected to be much worse. The Congressional Budget Office forecasts that the GDP will plunge 40%. That would be four times the largest drop on quarterly GDP records that go back to 1947.

Even so, health care researchers expect hospitals, doctor’s offices and surgery centers to rebound gradually. But they’re not sure yet how much patient volume will return.

People who have lost jobs and insurance coverage might not make doctor visits unless they absolutely have to.

The Kaiser Family Foundation recently estimated that nearly 27 million people—or about 8% of the U.S. population—could have become uninsured at least temporarily between March and early May because of the loss of employer-sponsored insurance.

It also might take a while for some patients to become confident that a hospital or doctor’s office is safe enough to visit without catching COVID-19.

“People are just afraid to go to any medical setting right now,” Antos said, noting that the economy also could face another setback if infection rates spike again.

In Texas, Dr. Desai has pulled chairs out of his waiting rooms to increase social distancing for patients and staff. He’s also asking other patients to wait in their cars until the exam room has been sanitized.

The dermatologist got some government assistance in the first round of payroll protection loans, and that will help him for a few more weeks.

But he’s not expecting a quick rebound. It’s hard to rebuild patient volume when only two people can be in the waiting room at the same time.

“After another month, I honestly have no clue whether we will be able to remain open,” he said.

Next year’s school cellphone policies would be more consistent—and more consistently enforced—in the Janesville School District if the school board approves a recommended policy.

At a meeting Monday, the Janesville School Board Policy, Personnel and Curriculum Committee recommended new language for the rules governing cellphones in the middle and high schools.

The policies wouldn’t change significantly, but they would be uniform among buildings, and the consequences for violating the rules would be more specific.

Last fall, the school board requested the policies be reviewed and updated for districtwide consistency, Assistant Superintendent Scott Garner said.

Middle and high school administrators met three times in the winter of 2019-20 to come up with the recommended policy, Garner told the committee.

At the middle school level, all cellphones would go into Yondr pouches during the first period of the school day. A Yondr pouch is a soft case that locks when it closes. The pouches can be opened at special stations before the lunch hour and at the end of the day.

Consequences for violating the rules would range from phones being confiscated and parents contacted to students losing the privilege of bringing their phones to school.

At the high school level, use of cellphones would not be allowed during class except with permission from teachers. This would include using phones in hallways or restrooms during class periods.

Cellphones could be used before and after school, during passing times, and during lunch.

If students wanted to bring their cellphones into classrooms, they could keep them in pouches provided for the purpose. In this case, a “pouch” is just that: a container of fabric or another material. Devices must be turned off or silenced.

The district looked at getting Yondr pouches for the high schools, but they turned out to be “logistically and financially not possible,” Garner told the committee.

Smartwatches, which often have many of the same functions as phones, could be worn in the classroom, according to the rules. However, watches would be confiscated if “the student is using the watch in any way other than telling time,” the policy states.

At the high school level, consequences would include:

First offense: Phone turned over to the office with a behavior referral. Phone is returned to the student at the end of the day.

Second offense: Phone turned over to office with behavior referral and returned to a parent or guardian at the end of the day. Student gets a detention.

Third and subsequent offenses: Phone turned over to the office with a behavior referral; parent or guardian must meet with school officials and the phone must be checked in and out of the office for 20 days.

Refusing to follow the rules would lead to an in-school or out-of-school suspension and the phone being check in and out of the office for 20 days.

The policy will not go into effect unless approved by the full school board. 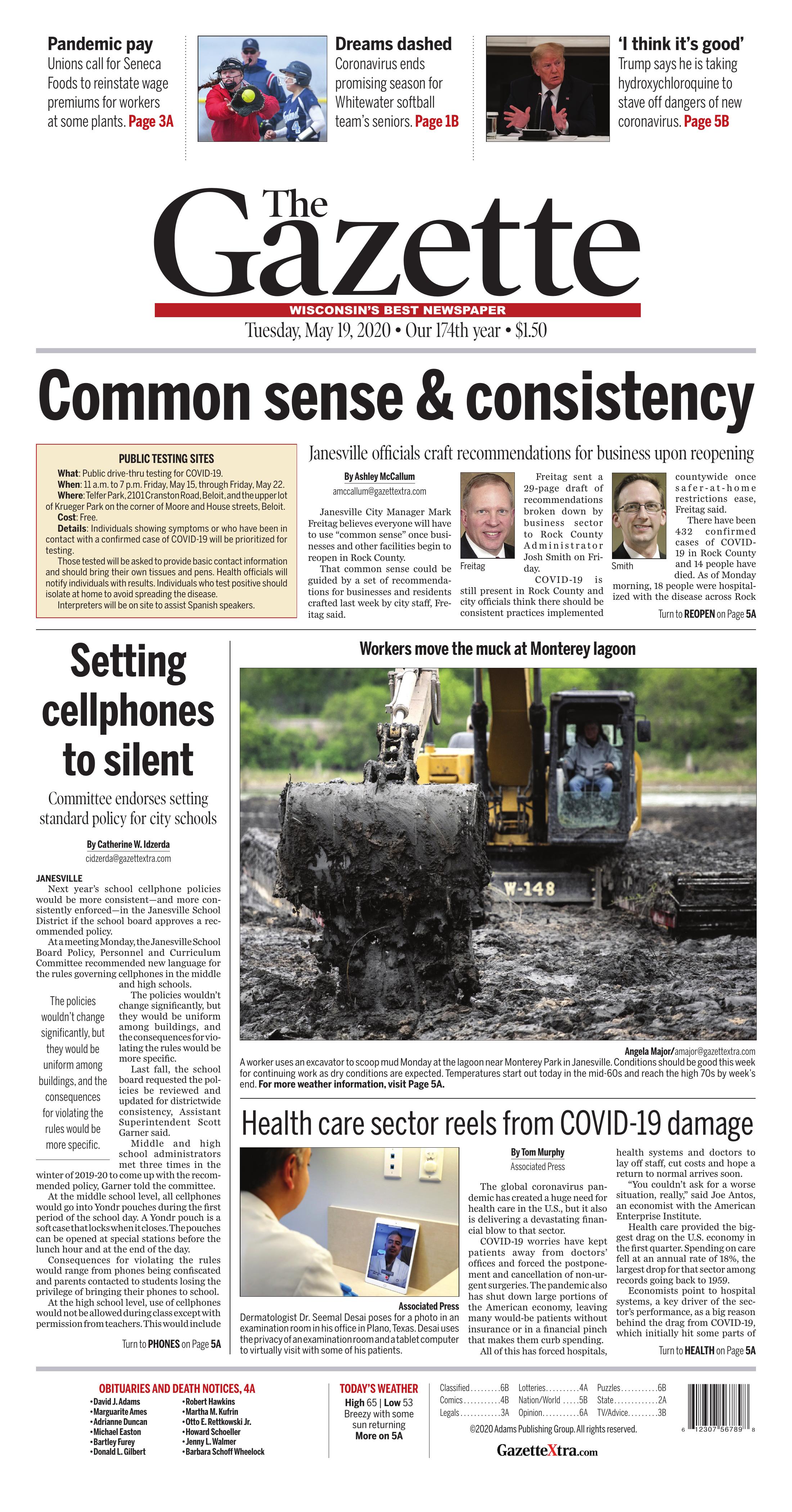