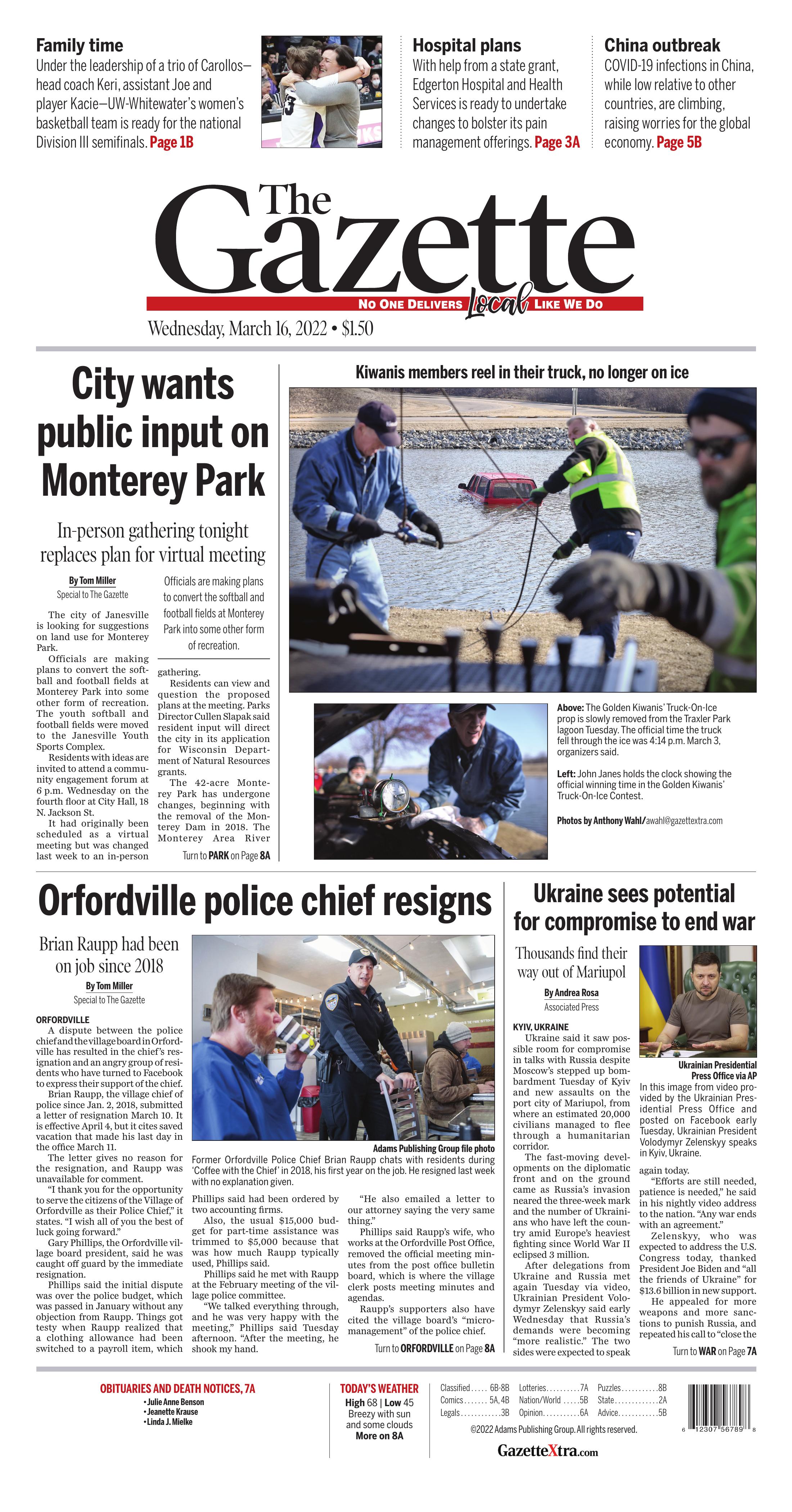 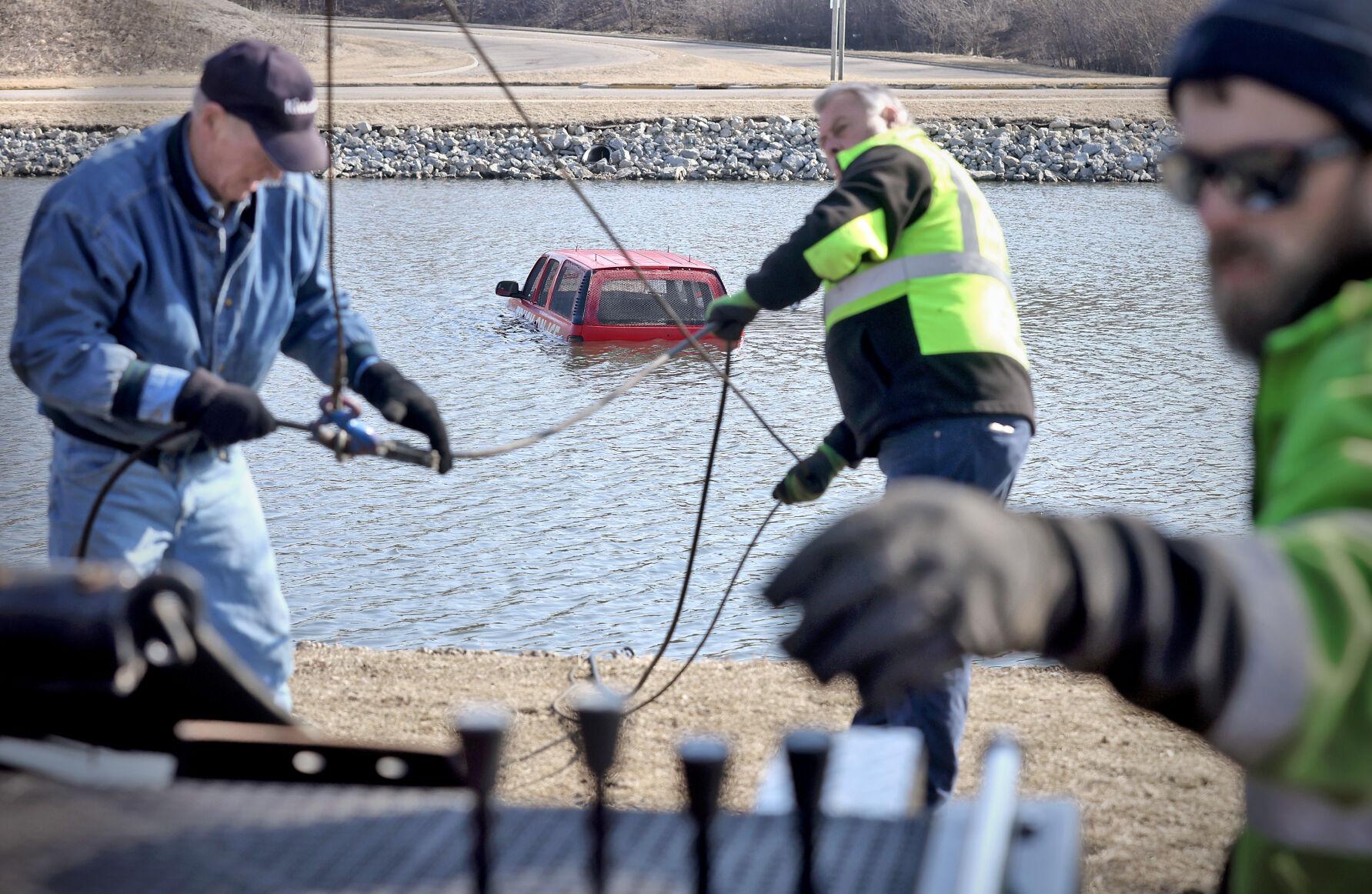 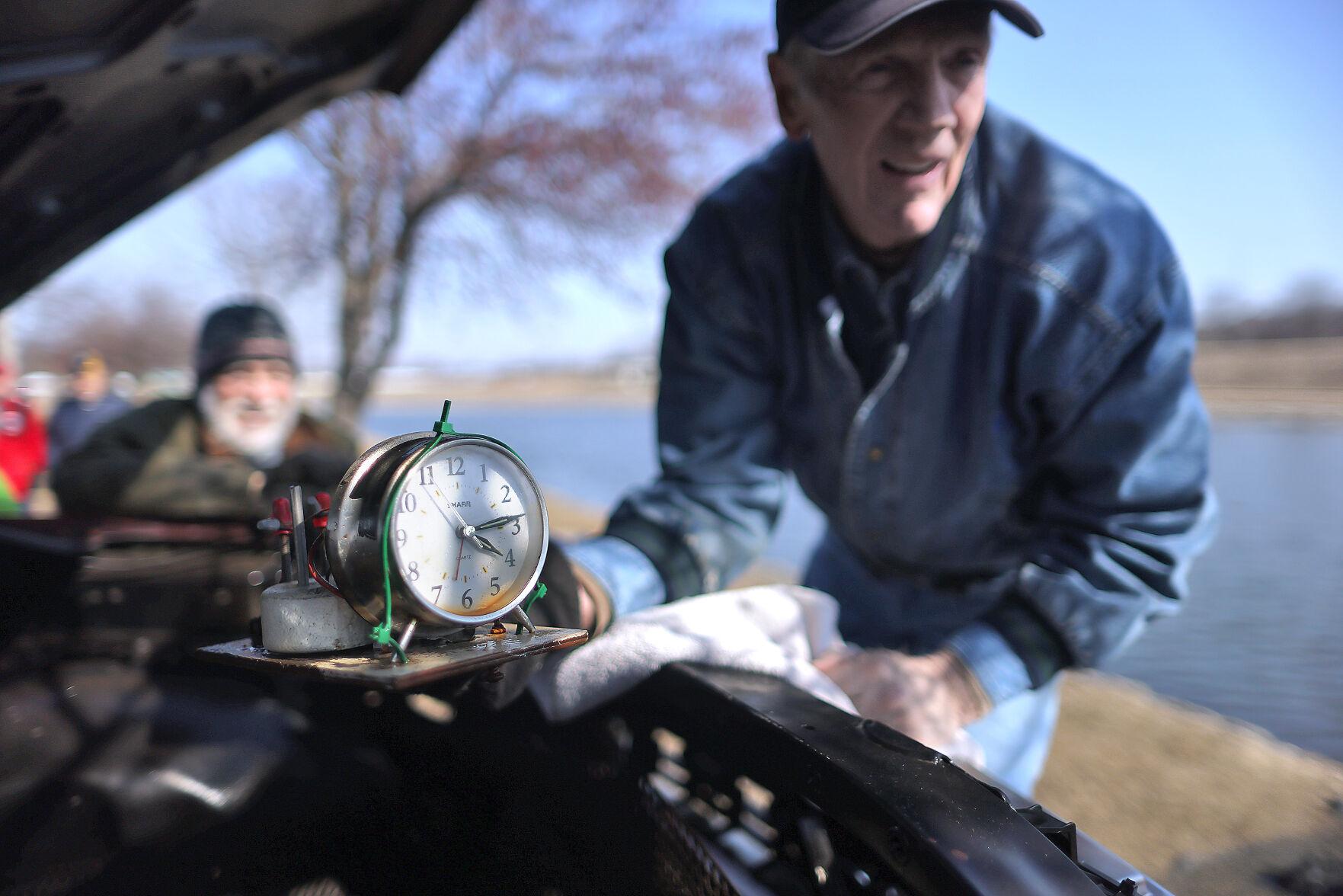 John Janes holds the clock showing the official winning time in the Golden Kiwanis’ Truck-On-Ice Contest. The clock stopped at 4:14 p.m. March 3 after it was submerged in the water of the Traxler Park lagoon.

Former Orfordville Police Chief Brian Raupp chats with residents during ‘Coffee with the Chief’ in 2018, his first year on the job. He resigned last week with no explanation given.

A dispute between the police chief and the village board in Orfordville has resulted in the chief’s resignation and an angry group of residents who have turned to Facebook to express their support of the chief.

Brian Raupp, the village chief of police since Jan. 2, 2018, submitted a letter of resignation March 10. It is effective April 4, but it cites saved vacation that made his last day in the office March 11.

The letter gives no reason for the resignation, and Raupp was unavailable for comment.

“I thank you for the opportunity to serve the citizens of the Village of Orfordville as their Police Chief,” it states. “I wish all of you the best of luck going forward.”

Gary Phillips, the Orfordville village board president, said he was caught off guard by the immediate resignation.

Phillips said the initial dispute was over the police budget, which was passed in January without any objection from Raupp. Things got testy when Raupp realized that a clothing allowance had been switched to a payroll item, which Phillips said had been ordered by two accounting firms.

Also, the usual $15,000 budget for part-time assistance was trimmed to $5,000 because that was how much Raupp typically used, Phillips said.

Phillips said he met with Raupp at the February meeting of the village police committee.

“We talked everything through, and he was very happy with the meeting,” Phillips said Tuesday afternoon. “After the meeting, he shook my hand.

“He also emailed a letter to our attorney saying the very same thing.”

Phillips said Raupp’s wife, who works at the Orfordville Post Office, removed the official meeting minutes from the post office bulletin board, which is where the village clerk posts meeting minutes and agendas.

Raupp’s supporters also have cited the village board’s “micromanagement” of the police chief.

Phillips said that issue came about when some Orfordville residents complained that overnight parking ordinances weren’t being enforced. Orfordville has two patrol officers to cover both Orfordville and Footville, which pays $60,000 annually for police coverage, Shawna March, Footville’s clerk/treasurer, said, according to draft minutes of Monday's meeting.

Phillips said he checked the two officers’ timecards and found the late-night officer was often clocking out an hour earlier than recommended. Phillips said that has resulted in claims that he was micromanaging the police department.

Raupp submitted his letter of resignation after the February board meeting had been adjourned, so it was not taken up by the board until its meeting Monday night.

According to draft meeting minutes, nine residents of Orfordville or Footville spoke at the meeting Monday night. All of them either supported Raupp or asked that more information be made available.

Phillips, who is in his third year of being board president, has taken a pounding on Facebook, as has the board as a whole.

“Everything has to be on Facebook nowadays,” Phillips said.

Phillips said he was just doing his job and that he never had written up a negative report for Raupp’s personnel file. Raupp’s letter requested copies of all forms, records and letters from his personnel file.

“I feel like I’m being made out to be the bad guy,” Phillips said. “In reality, all I am doing is following what the ordinance is telling me to do. I’m the one that has to see that ordinances are being enforced.

“I can’t tell a police officer to write tickets, but I can tell him to enforce the ordinance.”

The police department is working with a two-man staff.

Phillips said he will attempt to have a meeting of the village board Friday night when it will name an acting/interim chief.

Corrected to fix the misspelling of Shawna March, to attribute statements to meeting minutes and to remove an incorrect reference to Phillips' residence.

Work on the Monterey lagoon finished in 2020, and now the city is working on a plan for the rest of the park that has been created by the removal of the Monterey Dam.

The city of Janesville is looking for suggestions on land use for Monterey Park.

Residents with ideas are invited to attend a community engagement forum at 6 p.m. Wednesday on the fourth floor at City Hall, 18 N. Jackson St.

It had originally been scheduled as a virtual meeting but was changed last week to an in-person gathering.

Residents can view and question the proposed plans at the meeting. Parks Director Cullen Slapak said resident input will direct the city in its application for Wisconsin Department of Natural Resources grants.

The 42-acre Monterey Park has undergone changes, beginning with the removal of the Monterey Dam in 2018. The Monterey Area River Restoration project is now complete, having added picnic and play area.

“We’re looking at the middle main area of the park,” said Slapak. “Just to see if we can put it to better use. It’s a large area.”

In its draft of the 2021-25 strategic plan, the city had proposed hiring a consultant and design firm to look into Monterey Park repurposing this with plans for park upgrades or changes in 2023.

Slapak said the designs would be separate from the Monterey Area River Restoration project and would focus specifically on improving park functions.

“We had a meeting with our parks and recreation advisory committee last Tuesday and got some of their thoughts,” Slapak said. “Now we want to get some thoughts from the citizens.”

The city of Janesville is working with Parkitecture & Planning, a Madison consulting firm on developing a plan for the area.

“It may be several years before we move on anything because of funding, but it will set us up potentially for applying for DNR grants,” Slapak said.

Restoration of the park and wetlands portion of the park was a source of controversy after the city announced plans to remove the dam. An opposition group wanted to save the structure, which needed extensive repairs.

The $1.27 million shoreline restoration project finished in 2020 with a detention pond and peninsula with park space and a berm built from rock and fill from a local quarry. The original plan had been to use materials scooped from the bottom of the lagoon, but a contractor at the time told the city the “organic muck” at the bottom of the lagoon would not be suitable.