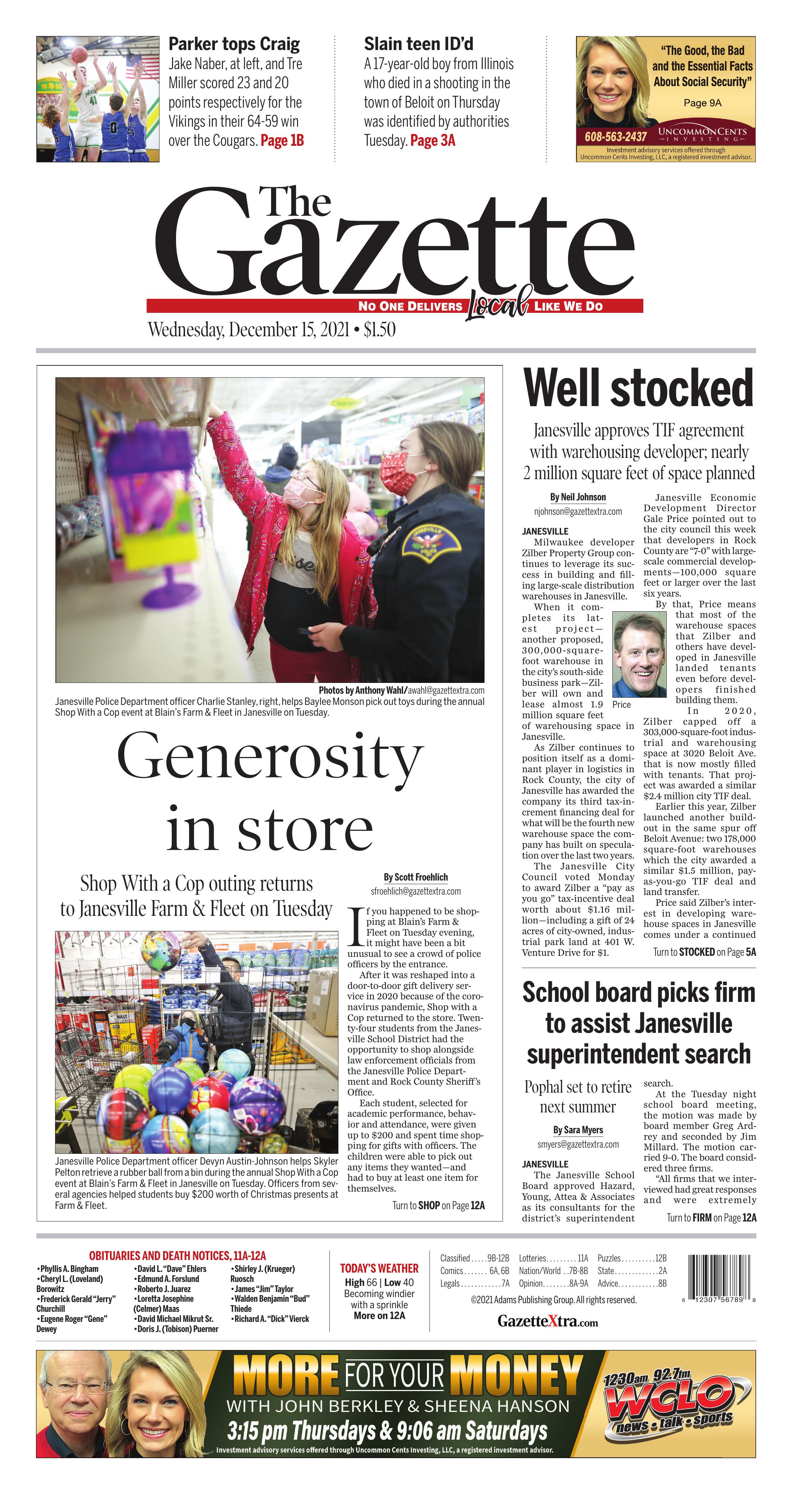 Janesville Police Department officers Michael Feirn, left, and Dylon Hansen, back left, both help Salih Williams, 6, fill up his cart with items during the annual Shop With a Cop at Blain’s Farm & Fleet in Janesville on Tuesday, Dec. 14. Officers from several agencies helped students buy $200 worth of Christmas presents at Farm & Fleet.

Ja’Corian Brooks, 10, watches as the toys he picked out are rung up in a checkout aisle during the annual Shop With a Cop at Blain’s Farm & Fleet in Janesville on Tuesday, Dec. 14. Officers from several agencies helped students buy $200 worth of Christmas presents at Farm & Fleet.

Jylon Turner, 11, touches some blankets at Blain’s Farm & Fleet in Janesville before picking one out to add to his cart during the annual Shop With a Cop event Tuesday.

If you happened to be shopping at Blain’s Farm & Fleet on Tuesday evening, it might have been a bit unusual to see a crowd of police officers by the entrance.

After it was reshaped into a door-to-door gift delivery service in 2020 because of the coronavirus pandemic, Shop with a Cop returned to the store. Twenty-four students from the Janesville School District had the opportunity to shop alongside law enforcement officials from the Janesville Police Department and Rock County Sheriff’s Office. 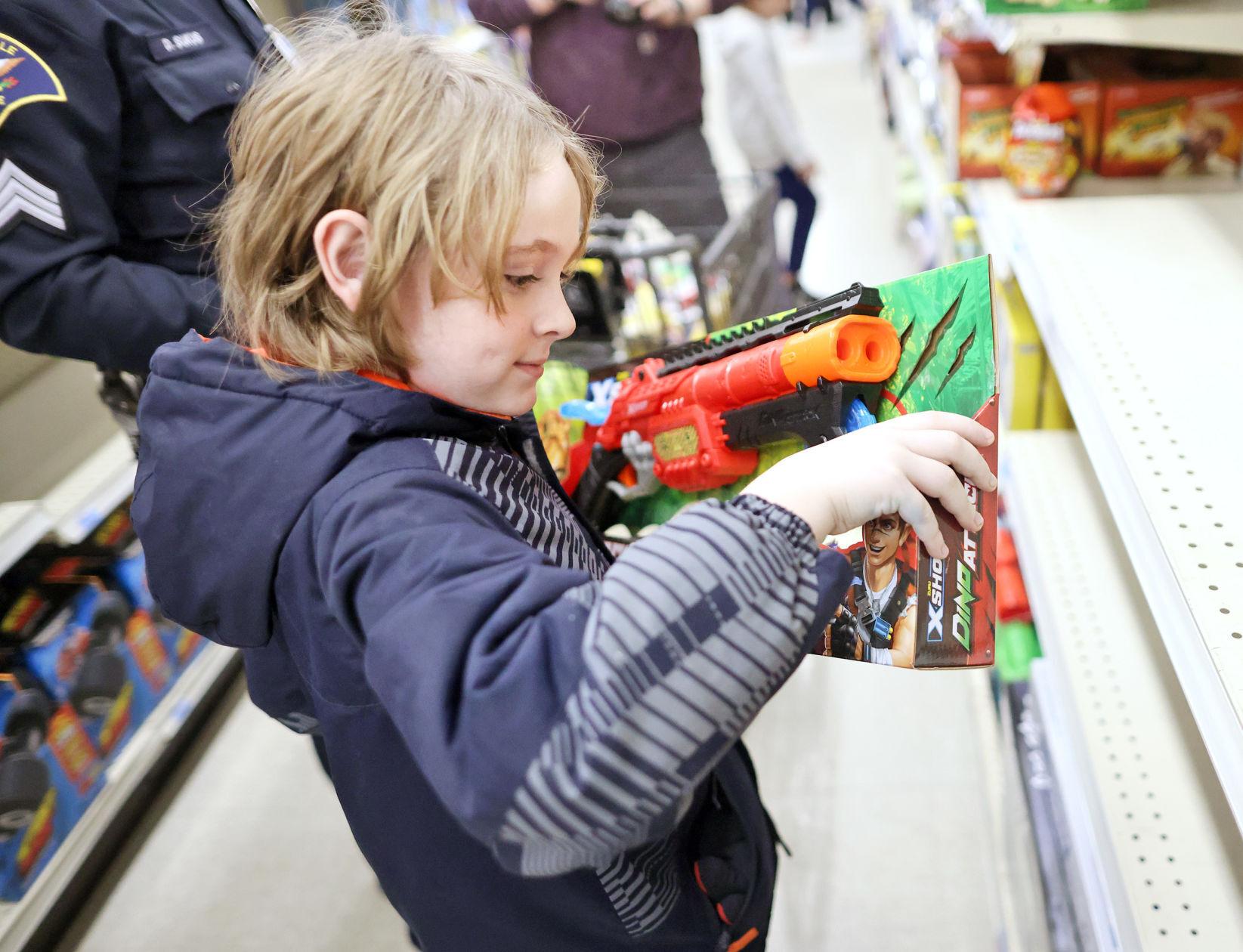 Jadon Adams adds one more toy to his cart before heading toward the checkout lines during the annual Shop With a Cop at Blain’s Farm & Fleet in Janesville on Tuesday.

Each student, selected for academic performance, behavior and attendance, were given up to $200 and spent time shopping for gifts with officers. The children were able to pick out any items they wanted—and had to buy at least one item for themselves.

For one boy, this was an opportunity to add to his toy gun collection and stock up on clothes before Christmas.

A fifth-grader at Monroe Elementary School, the boy participated in his second Shop with a Cop in the last three years, though this go-around was a little more difficult for him. His mother said the pandemic led him to become more withdrawn in public situations.

Not only was the spree a chance for the boy to reacclimate to public spaces but it was also a chance for him to interact in more “positive spaces” that his mother said are few and far between.

“It’s good for him to be influenced and participate in things like this that are positive for him,” she said.

After being paired up with officer Victoria Dawson of the Janesville Police Department, the boy shed his initial apprehension and led the way to the clothing section.

Dawson, who recently helped with Milton’s Shop With a Cop outing, said it was rewarding to interact with children in a setting where both officers and civilians can bond.

“It’s not often I have contact with kids, and usually it’s not always good contact,” she said. “If I can increase the ones that are positive, it’s likely to make a positive impact.”

In addition to bonding, Dawson said it also gives people a chance to see the softer side of police.

“Everyone thinks we’re militaristic, but we’re not,” she said.

Though the boy's mother, who tagged along, encouraged him to get clothing he needed, the 11-year-old was anxious to get to the toys. The first thing he spotted was a toy gun, another of which he later grabbed—unbeknownst to his mother. When she asked him why he had gotten duplicate toys, he said the other was for his younger brother.

“He’s such a good kid,” she said, adding that her son purchased toys for his brother the last time.

Janesville police Chief Dave Moore, who also participated in the event, called the occasion an important opportunity for police officers to connect with youth in a helpful and giving way.

“If you think about the police profession, many of the contacts with young folks are in a circumstance of a negative contact,” he said.

Because children selected for Shop With a Cop were in some way remarkable, Moore said they were deserving of the extra attention.

“This gives you a chance to build those relationships in a positive way,” Moore said.

Once the boy shopped to his heart’s content—and the $200 limit was reached—it was time to check out. As they waited for the cashier to ring up the gifts he turned to give his mother a hug, looked up and said “thanks.” 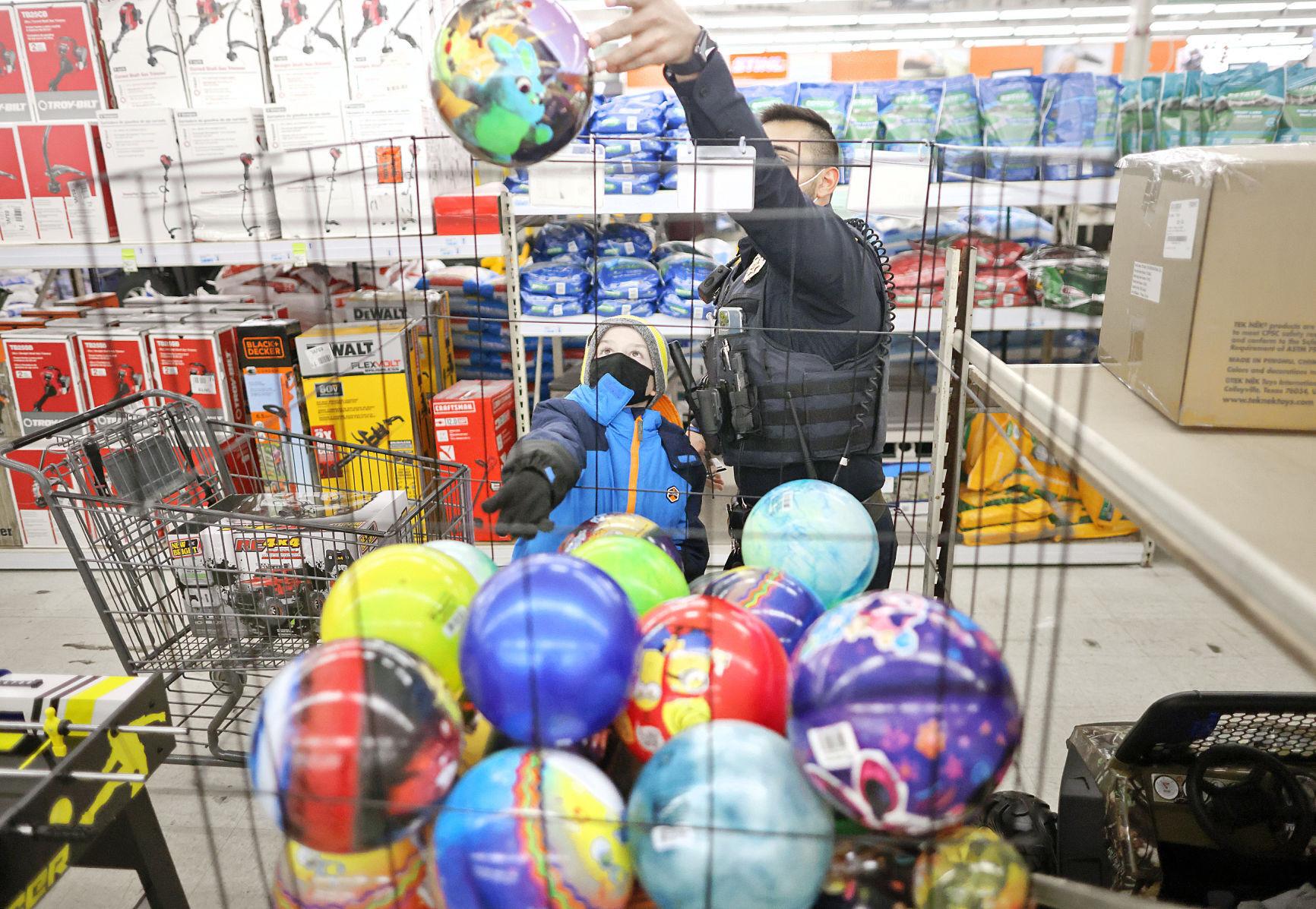 Janesville Police Department officer Devyn Austin-Johnson helps Skyler Pelton retrieve a rubber ball from a bin during the annual Shop With a Cop event at Blain’s Farm & Fleet in Janesville on Tuesday. Officers from several agencies helped students buy $200 worth of Christmas presents at Farm & Fleet.

A contractor works on a seam in a concrete tip-up wall on a 303,000-square-foot warehouse building developed by Zilber Property Group at the intersection of Highway 11 and County G in Janesville in a 2019 Gazette file photo. Zilber intends to build another, 300,000-foot distribution warehouse building in the same city owned business park, and the city of Janesville has agreed to award the company land and tax incentives for the project.

When it completes its latest project—another proposed, 300,000-square-foot warehouse in the city’s south-side business park—Zilber will own and lease almost 1.9 million square feet of warehousing space in Janesville.

As Zilber continues to position itself as a dominant player in logistics in Rock County, the city of Janesville has awarded the company its third tax-increment financing deal for what will be the fourth new warehouse space the company has built on speculation over the last two years.

The Janesville City Council voted Monday to award Zilber a “pay as you go” tax-incentive deal worth about $1.16 million—including a gift of 24 acres of city-owned, industrial park land at 401 W. Venture Drive for $1.

Janesville Economic Development Director Gale Price pointed out to the city council this week that developers in Rock County are “7-0” with large-scale commercial developments—100,000 square feet or larger over the last six years.

By that, Price means that most of the warehouse spaces that Zilber and others have developed in Janesville landed tenants even before developers finished building them.

In 2020, Zilber capped off a 303,000-square-foot industrial and warehousing space at 3020 Beloit Ave. that is now mostly filled with tenants. That project was awarded a similar $2.4 million city TIF deal.

Earlier this year, Zilber launched another buildout in the same spur off Beloit Avenue: two 178,000 square-foot warehouses which the city awarded a similar $1.5 million, pay-as-you-go TIF deal and land transfer.

Even at its completed warehouses, Price said, Zilber continues to see requests by distributors for more space to park and maneuver semis in and out of distribution center lots. That’s a testament to the rampant demand for the shipment of goods by truck that has grown during the pandemic.

Price said Zilber’s aim is to get its fourth new warehouse space at 401 W. Venture Drive built and ready for tenants by the end of 2022. He indicated Zilber likely already would have brought the development pitch to the city earlier this year, but a shortage in supply of commercial construction steel delayed the development’s launch.

He said the city worked up its latest TIF deal with Zilber in part because industrial site selectors who seek to move fast on leasing property are now hunting for projects that are under active development.

Earlier this fall, Zilber bought 500,000 square feet of existing, industrial facilities, most within the city’s south side business park. At the time, the company said in a statement it was picking up the properties to continue to ride a wave of demand for more distribution and warehousing hubs along the Interstate 90/39 corridor in Rock County.

James Otterstein, who leads economic development for Rock County, told The Gazette in an email that he predicts that distribution and warehousing developments in Janesville and throughout Rock County will remain hot over the next half decade.

Otterstein said what has not changed is that Janesville and Beloit are located along a major Interstate corridor that connects to the bulk of the upper Midwest in just a single day’s drive. That makes the corridor an attractive spot for developers and site selectors.

What has changed? The state Department of Transportation has finally completed a multiyear lane expansion project to boost the I-90/39 corridor between Beloit and Madison from four lanes to six—and eight lanes through Janesville.

That improves prospects for continued industrial development along the corridor, including warehousing.

“Several of the boxes and nameplates that planted themselves in Rock County during the last decade did so in part because of the value-added benefits created by the third Interstate lane,” Otterstein said.

Otterstein believes that much of the large-scale warehousing properties in Rock County eventually will become owned by national or international holding companies or distribution firms.

That would be a shift from past development strategies in Janesville that have focused on public-private developments between the city and local developers. The shift, Otterstein believes, will bring a more varied cast of industrial tenants to Janesville.

Otterstein said he believes that like Zilber, other developers will gradually shift toward building larger and larger warehouses along corridors. In the coming decade, it won’t be suprising to see warehouse developments that routinely tilt toward the 500,000-square-foot to 1-million-square-foot range.

Such growth will continue to draw down on business park land held in store by municipal governments, 10 acres, 15 acres or 25 acres at a time.

That’s something that local government, economic development officials and developers are aware of, and in Janesville, it prompted the city earlier this fall to buy an option on 129 acres of farmland off the I-90/39 corridor just south of the Dollar General distribution warehouse complex off highway G.

The Janesville School Board approved Hazard, Young, Attea & Associates as its consultants for the district’s superintendent search.

At the Tuesday night school board meeting, the motion was made by board member Greg Ardrey and seconded by Jim Millard. The motion carried 9-0. The board considered three firms.

“All firms that we interviewed had great responses and were extremely impressive,” Ardrey said. “We couldn’t have made a poor decision. HYA stood out. No. 1, their responsiveness, their interview and their preparedness for the interview. It was what put them above the other firms.”

Ardrey also said the board needs to feel comfortable with the consulting firm to hire the person who will lead the district for years to come. HYA has more than 75 years of experience.

“We feel that we will build a strong relationship with them,” Ardrey said. The community will appreciate the openness and the many different ways to connect.”

The board will be publishing the district’s timeline for the superintendent search. An exact date is to be determined.

Superintendent Steve Pophal’s last day will be June 30, 2022. Pophal has said he is retiring to spend more time with family. 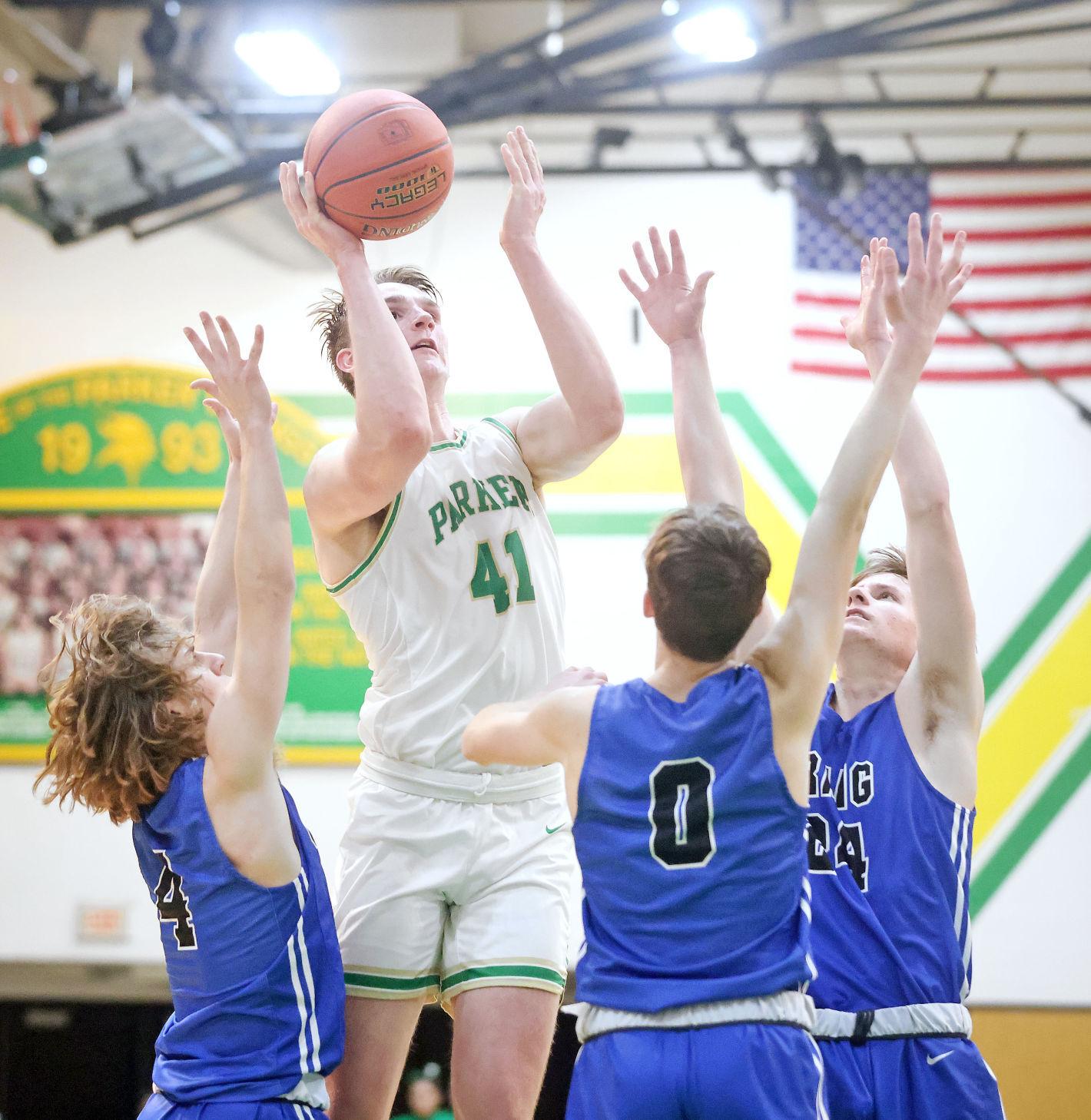 Janesville Parker’s Jake Naber takes a shot over three Janesville Craig players during the first half of their crosstown rivalry game at Parker High School on Tuesday, Dec. 14. Naber scored a game-high 23 points to help hold off Janesville Craig 64-59.