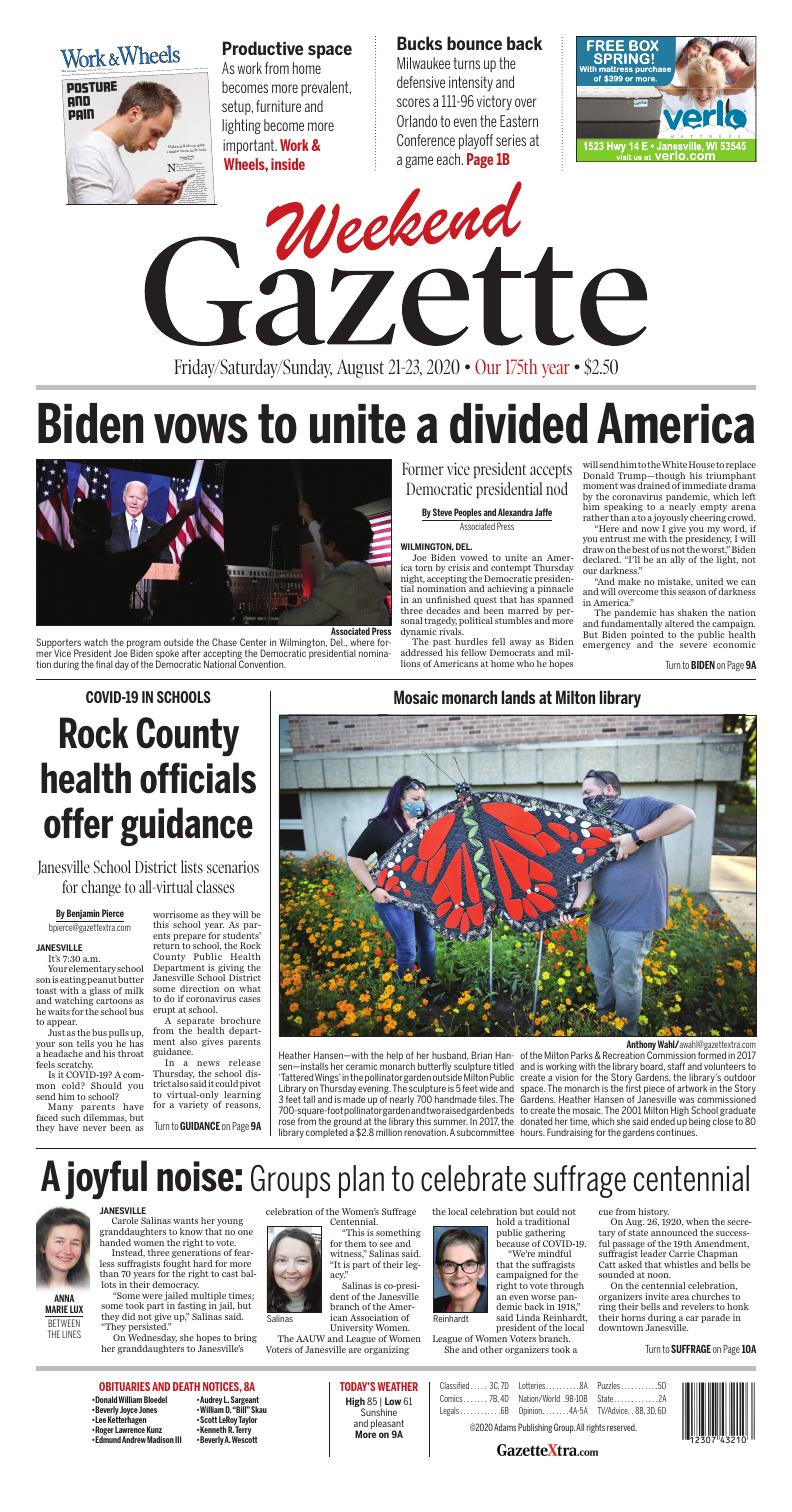 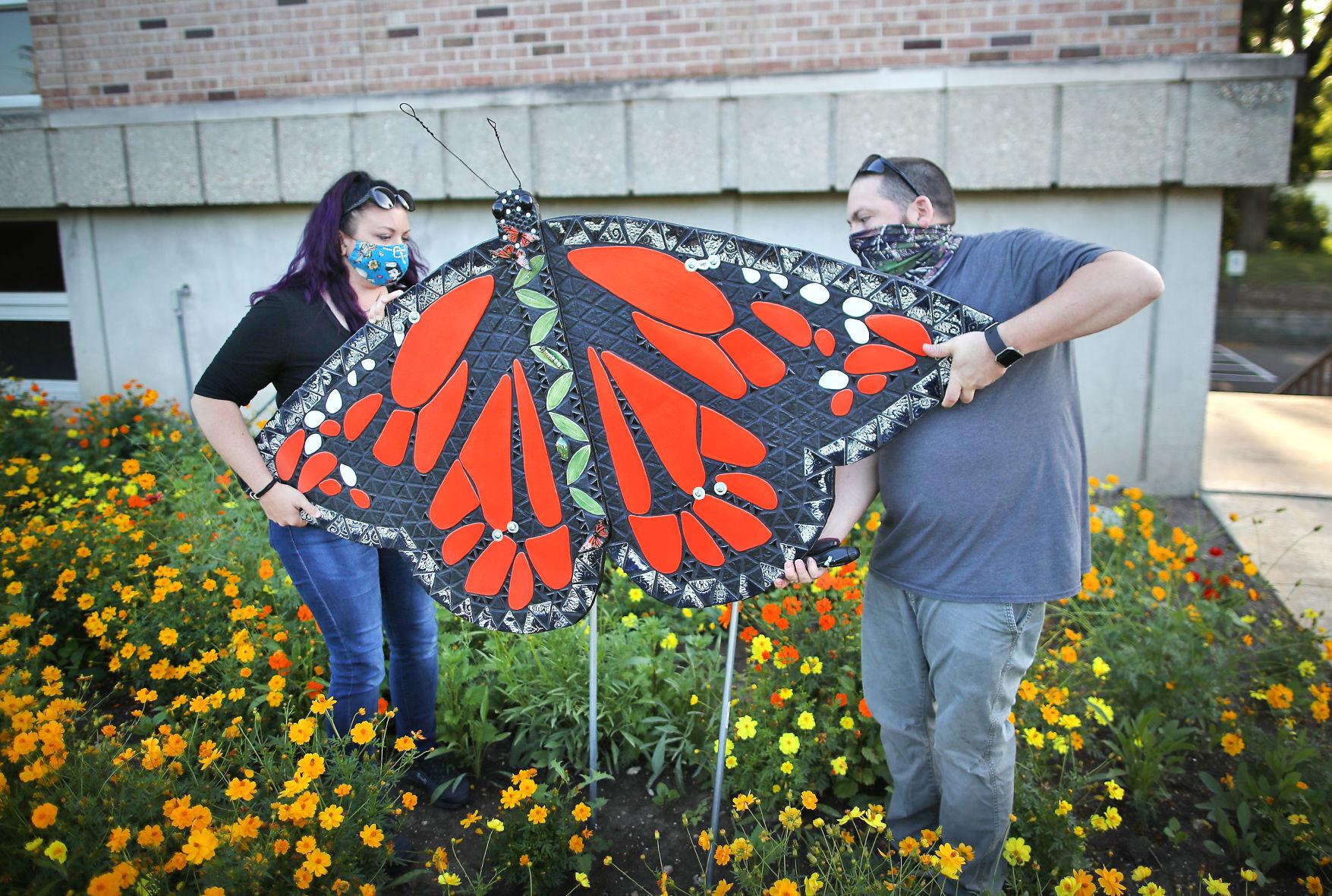 With the help of her husband, Brian Hansen, Heather Hansen installs her ceramic monarch butterfly sculpture titled ‘Tattered Wings’ in the pollinator garden outside Milton Public Library on Thursday evening. The sculpture is 5 feet wide and 3 feet tall and contains just under 700 handmade tiles.

Carole Salinas wants her young granddaughters to know that no one handed women the right to vote.

Instead, three generations of fearless suffragists fought hard for more than 70 years for the right to cast ballots in their democracy.

“Some were jailed multiple times; some took part in fasting in jail, but they did not give up,” Salinas said. “They persisted.”

On Wednesday, Aug. 26, she hopes to take her granddaughters to Janesville’s celebration of the Women’s Suffrage Centennial.

“This is something for them to see and witness,” Salinas said. “It is part of their legacy.”

Salinas is co-president of the Janesville branch of the American Association of University Women.

The AAUW and League of Women Voters of Janesville are organizing the local celebration but could not hold a traditional public gathering because of COVID-19.

“We’re mindful that the suffragists campaigned for the right to vote through an even worse pandemic back in 1918,” said Linda Reinhardt, president of the local League of Women Voters branch.

She and other organizers took a cue from history.

On Aug. 26, 1920, when the secretary of state announced the successful passage of the 19th Amendment, suffragist leader Carrie Chapman Catt asked that whistles and bells be sounded at noon.

On the centennial celebration, organizers invite area churches to ring their bells and revelers to honk their horns during a car parade in downtown Janesville.

The parade will begin at noon in the parking lot of St. John Lutheran Church, make a big loop around the Rock County Courthouse and end at the Janesville Woman’s Club.

Revelers will pass the new women’s history mural on the west side of the courthouse, which honors some of Rock County’s pioneering women.

Reinhardt encourages people to wear white, which was worn by suffragists during parades and marches of the 19th and early part of the 20th centuries. White dresses stood out in a crowd and were a defining symbol of the movement.

“We want to celebrate women earning the right to vote,” Reinhardt said. “But we also recognize the fight for the right to vote isn’t over. There are still people who find it difficult to vote.”

Because of COVID-19, the two groups have made other changes:

Signs will be available in the parking lot of the Janesville Woman’s Club, 108 S. Jackson St., from 10 a.m. to 2 p.m. Saturday for a pledge of $20 or more. They also will be for sale in the St. John Lutheran Church parking lot on the day of the car parade.

This year, the league is working with other service groups to offer a drive-thru voter information/food drive for ECHO combination eventSaturday, Aug. 29, at Traxler Park.

The league will hand out voter information, and service clubs will collect donations for ECHO.

Salinas said she has always voted and is fascinated that some in her family were witnesses to the successful passage of the 19th Amendment.

“You think of suffrage as being way back in history,” Salinas said. “But it impacted my mother and grandmother. They voted together for the first time in 1928.”

Reinhardt invites people to celebrate and, most important, to take part in their democracy.

“We hope they will recognize the importance of the right to vote and to exercise that right in November,” she said. “We shouldn’t take it for granted.”

Anna Marie Lux is a human interest columnist for The Gazette. Call her with ideas or comments at 608-755-8264, or email amarielux@gazettextra.com.

What: Car parade to celebrate the Women’s Suffrage Centennial and new women’s history mural on the west wall of the Rock County Courthouse.

If you want to take part, RSVP to: lwvjvl.org/event-info/womens-suffrage-centennial.

Your elementary school son is eating peanut butter toast with a glass of milk and watching cartoons as he waits for the school bus to appear.

Just as the bus pulls up, your son tells you he has a headache and his throat feels scratchy.

Is it COVID-19? A common cold? Should you send him to school?

Many parents have faced such dilemmas, but they have never been as worrisome as they will be this school year. As parents prepare for students’ return to school, the Rock County Public Health Department is giving the Janesville School District some direction on what to do if coronavirus cases erupt at school.

In a news release Thursday, the school district also said it could pivot to virtual-only learning for a variety of reasons, including COVID-19, mechanical failure at a school, inclement weather or extreme heat that would make wearing face masks unsafe.

The statement said the superintendent would make the decision on virtual learning and inform parents as soon as possible.

The district this month posted the county’s return-to-school guidelines on its website. They include quarantine procedures and recommendations on when to send a student or staff member home.

A student or staff member will be sent home immediately if he or she displays a fever of 100.4 degrees or higher. Siblings of students or the children of staff members who are sent home should be screened for symptoms.

Students or staff also will be sent home if two or more of these symptoms are present:

A person who has been sent home may return to school with a doctor’s note saying the person does not have COVID-19 and returning to school is appropriate.

Staffers who test positive for the virus or who have been in contact with someone who has COVID-19 must notify their supervisors. Parents with children in the same situation must contact the principal of their child’s school.

The health department will investigate all confirmed positive cases before proceeding with contact tracing, notifications, cleaning and possible school closures.

People who test positive for the virus but are asymptomatic can return to school 10 days after their first positive test as long as no other symptoms have developed and they have a doctor’s note saying it is appropriate.

Those who test positive and display symptoms will not be allowed at school until they have been fever-free for 24 hours without the use of a fever-reducing medication, their symptoms improve, at least 10 days have passed since symptoms appeared and a note from their doctor says it is appropriate to return.

If staff members or students have been within 6 feet of an infected person for 15 minutes or more, they can return to school 14 days after their last contact as long as they display no symptoms. If they are tested, the result must be negative, and a doctor’s note recommending return is required. 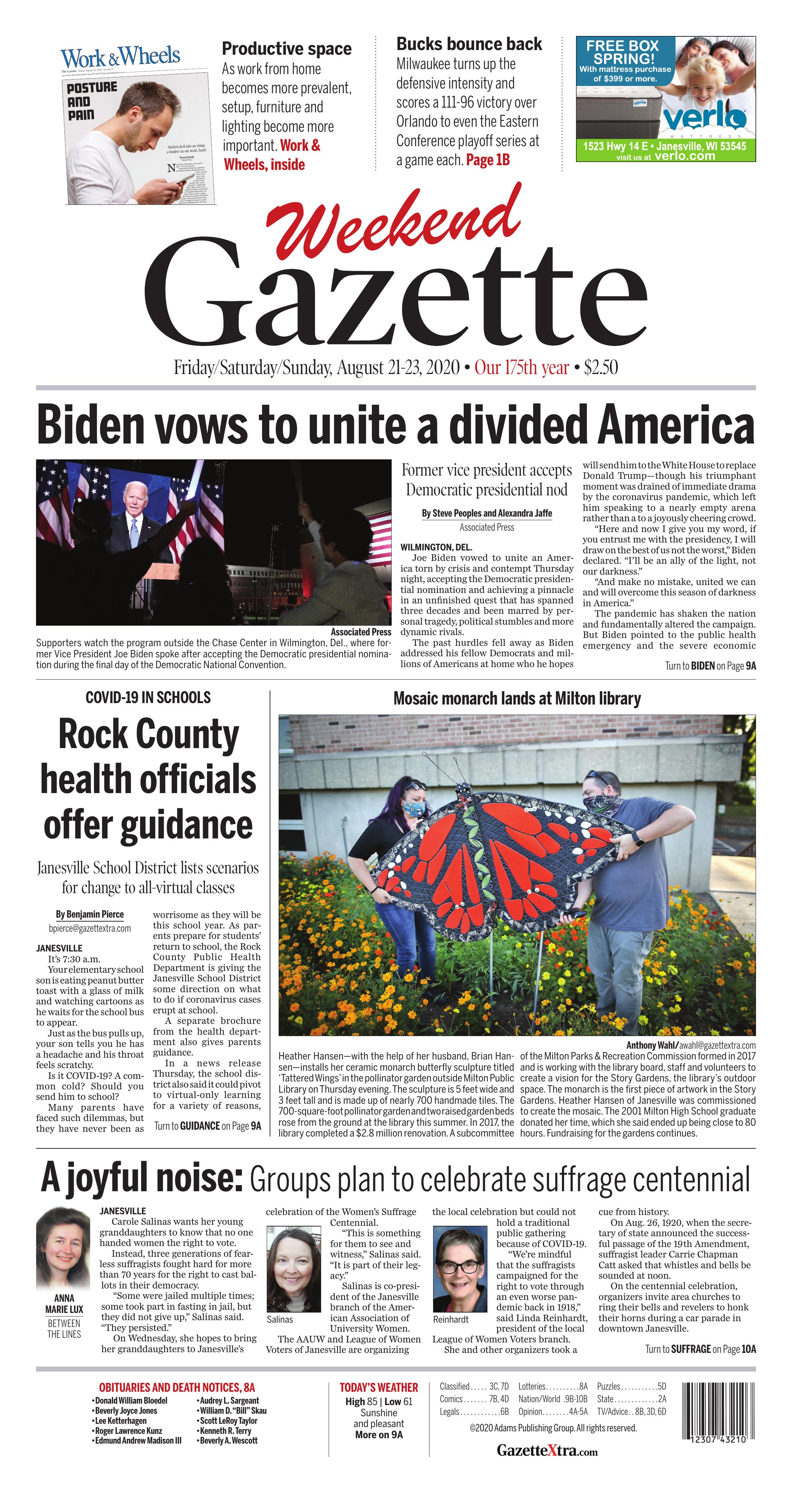