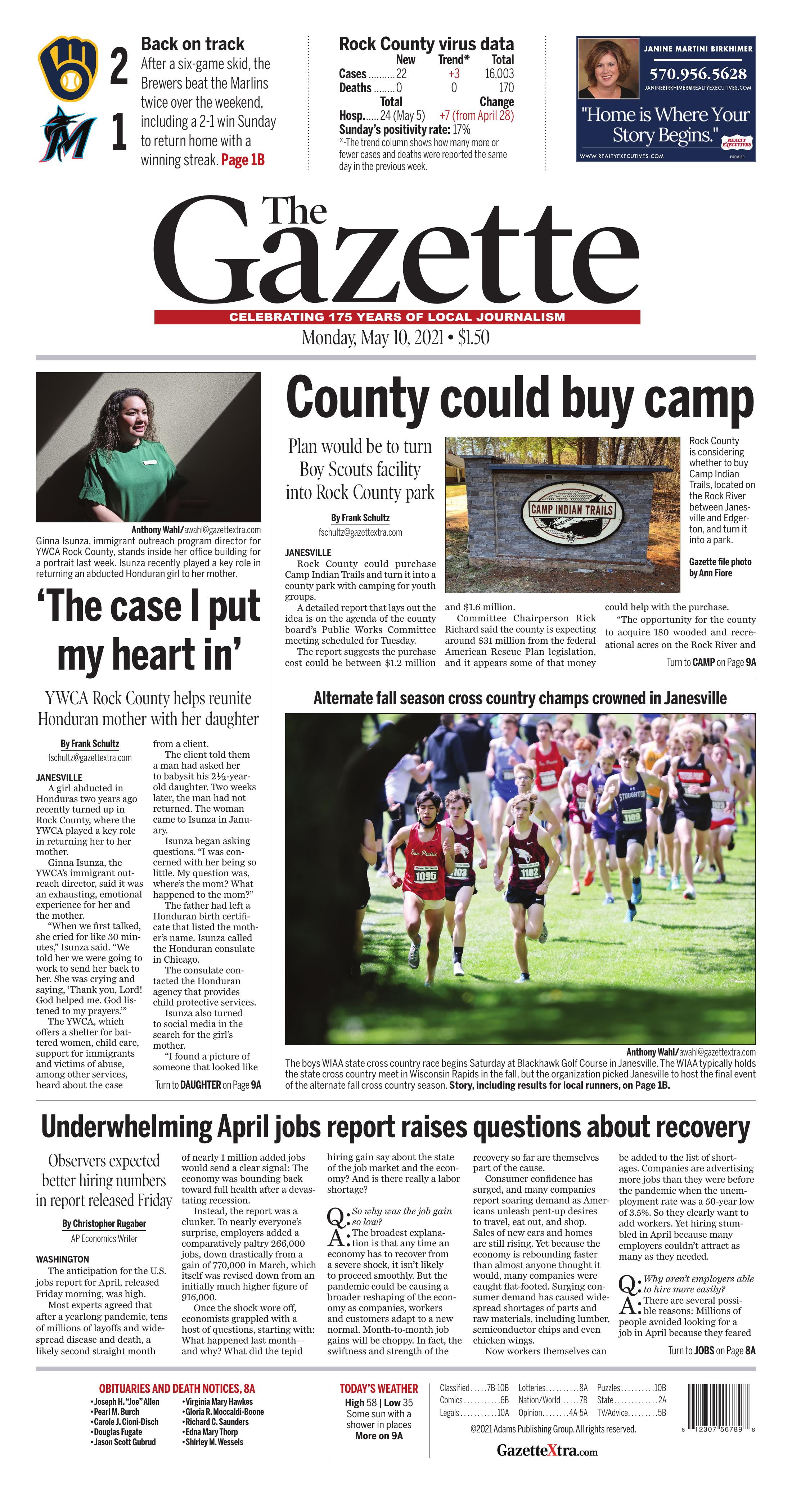 Rock County could purchase Camp Indian Trails and turn it into a county park with camping for youth groups.

A detailed report that lays out the idea is on the agenda of the county board’s Public Works Committee meeting scheduled for Tuesday.

The report suggests the purchase cost could be between $1.2 million and $1.6 million.

Committee Chairperson Rick Richard said the county is expecting around $31 million from the federal American Rescue Plan legislation, and it appears some of that money could help with the purchase.

“The opportunity for the county to acquire 180 wooded and recreational acres on the Rock River and open it as a park to county citizens comes along once in a lifetime, and I’m hearing support for the purchase from most people I’ve talked with in the county,” Richard said.

The Boy Scouts of America’s local Glacier’s Edge Council is required to sell the camp in order to help BSA settle lawsuits involving thousands of sexual abuse cases, The Gazette reported in March.

County Administrator Josh Smith said county staff members and some county board members have discussed the idea with scout leadership.

“If the committee thinks it’s a good idea, then staff will go back to the scouts and have discussions that could be described as negotiations as to whether or not it’s a viable option,” Smith said.

The idea could then become a resolution that would go to county board committees and ultimately to the county board for a decision, Smith said.

Money could come from a conservation/parks fund created about 12 years ago with the $1.8 million from an environmental impact fee paid by American Transmission Co. when the company upgraded its electric power lines, Smith said.

Another source of funding could be unallocated money in the general fund, which Smith likened to a county savings account used for one-time purchases and as a rainy-day fund.

“We would not be borrowing for this,” Smith said.

The report suggests allowing camping for Boy Scouts and other youth groups.

Part of the purchase could be a joint-use agreement that would involve BSA keeping about 68 acres on the southeast side, the report states. That could lessen the county’s purchase price.

Jason Ballew of the Glacier’s Edge Council said no decisions have been made as the council reevaluates all its properties.

“We are working to create a strategic plan that supports our volunteers and expands Scouting in our area with an outstanding program,” Ballew said in an email.

“Camp Indian Trails provides the rare opportunity where an existing property has already been developed into usable outdoor recreation space, making the possible transition from Boy Scout camp to county park much more efficient than other more challenging undeveloped sites,” the report states.

“One thing driving interest is preserving land for public use and keeping it from development. A lot of the county board is interested in preserving natural lands,” Smith said.

The park could become a lure for tourists, which could boost the local economy, the report states.

A private purchase, however, would move the tax-exempt property onto the tax rolls.

The report suggests a wide variety of uses for the site, including a zip line course or concerts. It also envisions generating revenue from recreational equipment rentals, concessions and a “water course/aqua park.”

The report suggests the county remove the pool and bathhouses, improve roads and the parking lot, improve trails and buildings, write a master plan, and other improvements at costs ranging from $425,000 to $700,000.

Ongoing maintenance would include hiring one full-time maintenance person and two part-time employees, costing $125,000 a year. Annual maintenance efforts aside from labor would cost an estimated $150,000 to $250,000.

A mother and her 2-year-old daughter embrace at an airport in Honduras in April after the missing girl surfaced in Rock County. The girl’s father abducted the girl when she was just 2 weeks old and brought her to the United States, officials said. On the right is Karla Garcia, the consul at the Honduran consulate in Chicago.

A girl abducted in Honduras two years ago recently turned up in Rock County, where the YWCA played a key role in returning her to her mother.

Ginna Isunza, the YWCA’s immigrant outreach director, said it was an exhausting, emotional experience for her and the mother.

“When we first talked, she cried for like 30 minutes,” Isunza said. “We told her we were going to work to send her back to her. She was crying and saying, ‘Thank you, Lord! God helped me. God listened to my prayers.’”

The YWCA, which offers a shelter for battered women, child care, support for immigrants and victims of abuse, among other services, heard about the case from a client.

The client told them a man had asked her to babysit his 2½-year-old daughter. Two weeks later, the man had not returned. The woman came to Isunza in January. 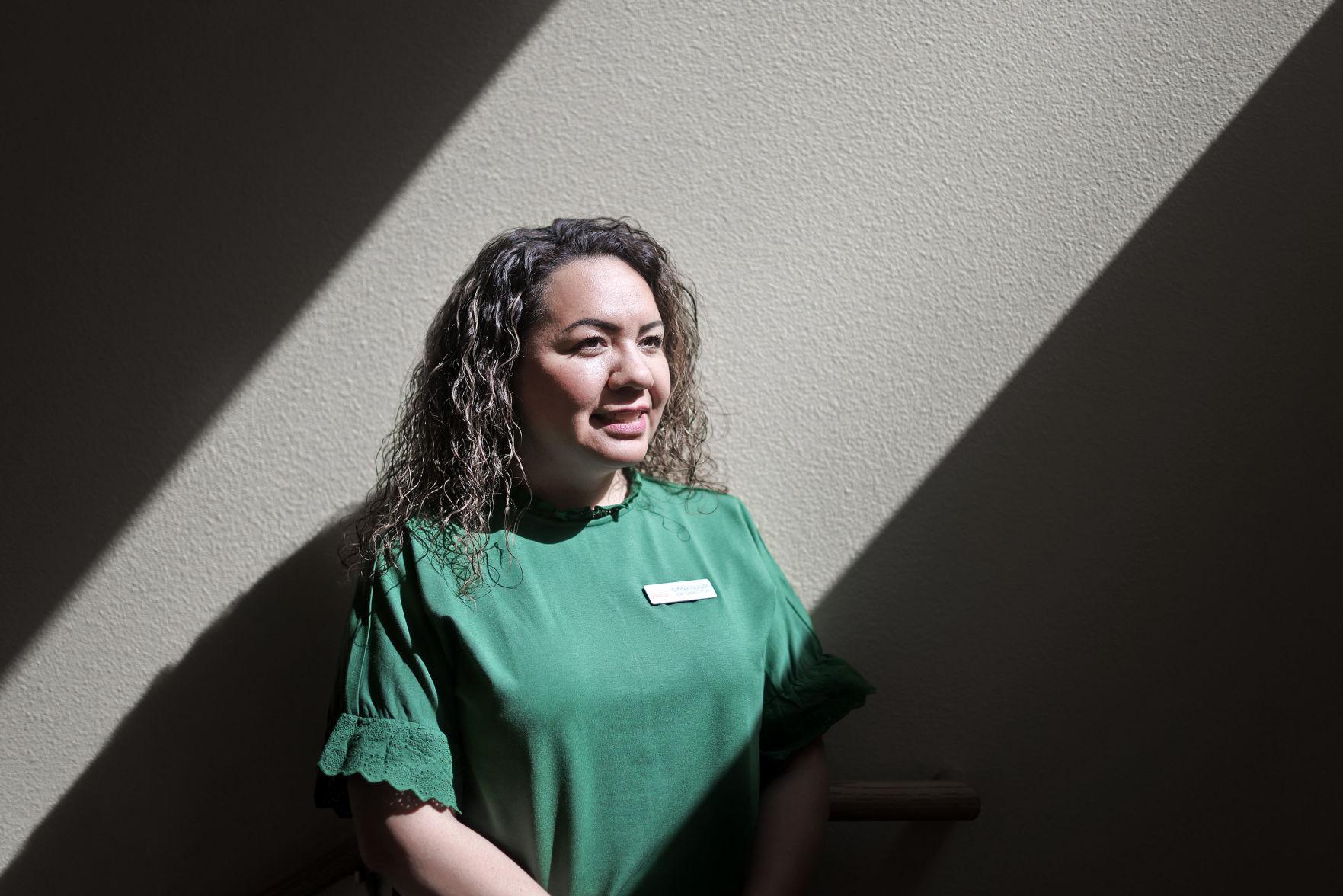 Isunza began asking questions. “I was concerned with her being so little. My question was, where’s the mom? What happened to the mom?”

The father had left a Honduran birth certificate that listed the mother’s name. Isunza called the Honduran consulate in Chicago.

Isunza also turned to social media in the search for the girl’s mother.

“I found a picture of someone that looked like the little girl—and she had pictures—saying, ‘I’m looking for my daughter. It’s been already more than two years,’” Isunza said.

“We talked for at least two hours on the phone. She explained the situation, and we were (eventually) able to confirm it was the mom.”

The woman sent a police report, a copy of the birth certificate and a photo of the girl taken within a month of her birth.

The YWCA and Honduran authorities are keeping the girl’s and her mother’s identities secret to protect them.

If the father is deported, he faces criminal charges in Honduras, Isunza said, and the concern is he might do harm to the family.

The mother had a difficult delivery of her first and only child and had to return to the hospital two weeks later, she told Isunza. That’s when the father took the baby.

The mother filed a report with police. Later, relatives started saying he and the girl were in the United States, Isunza said.

Isunza learned the father crossed at the U.S.-Mexico border, and he and the girl were detained for about two months.

“He pretty much used his little girl to enter the country,” Isunza said, although she said she can’t be sure what his plans were.

He and the girl spent the next two years moving around the country.

The consulate placed the girl in a safe place in Wisconsin, while the YWCA provided food, clothing and arranged for medical care using its immigrant relief fund.

“It touched my heart in so many ways. As a mom, I can only imagine what she when through in these two years,” Isunza said.

The girl was obsessed with Minnie Mouse, so they bought her a doll of the classic cartoon character.

“She was so happy with that,” Isunza recalled.

Wading through the bureaucracy of two countries took weeks of intense work. Isunza said it involved hundreds of phone calls, emails and faxing of documents.

“She had to go through a whole process in Honduras. We had to go through a different process here. I was very overwhelmed,” Isunza said. “We were working seven days a week. … In 10 years working with the immigrant community, this is the case I put my heart in, and all my energy. I’m a mom. My soul kept telling me I have to get her to her mom. That was my mission.

“We had to contact (U.S.) immigration because we needed to know when she entered (the United States) and what documents she presented,” Isunza said. “The consulate did a great job because they were able to keep custody of the girl during the process, so we didn’t have to turn her over (to immigration authorities, who might have deported her).”

Isunza was at O’Hare International Airport in Chicago to deliver the girl to her flight. That’s where she met the Honduran consular officials in person.

“We were all hugging. It was very emotional.”

Photos posted by the consulate show the girl in the arms of her mother in the airport in Honduras.

“People have a bad image of immigration, (and) this case doesn’t help,” Isunza said.

Honduras, plagued by poverty, crime and government corruption, is a major source of people seeking refuge in the United States who sometimes illegally cross the U.S.-Mexico border, according to the Council on Foreign Relations.

The Biden administration has increased aid to Honduras, Guatemala and El Salvador, collectively known as the Northern Triangle, in an effort to ease poverty and crime in those countries. U.S. officials last month announced agreements with those governments, which pledged to increase efforts to stem migration toward the United States border.

Isunza said the little girl was always smiling, despite all she must have endured.

“This Mother’s Day is going to be different for me,” Isunza said last week, “but I’m happy, and happy to have my kids with me.”