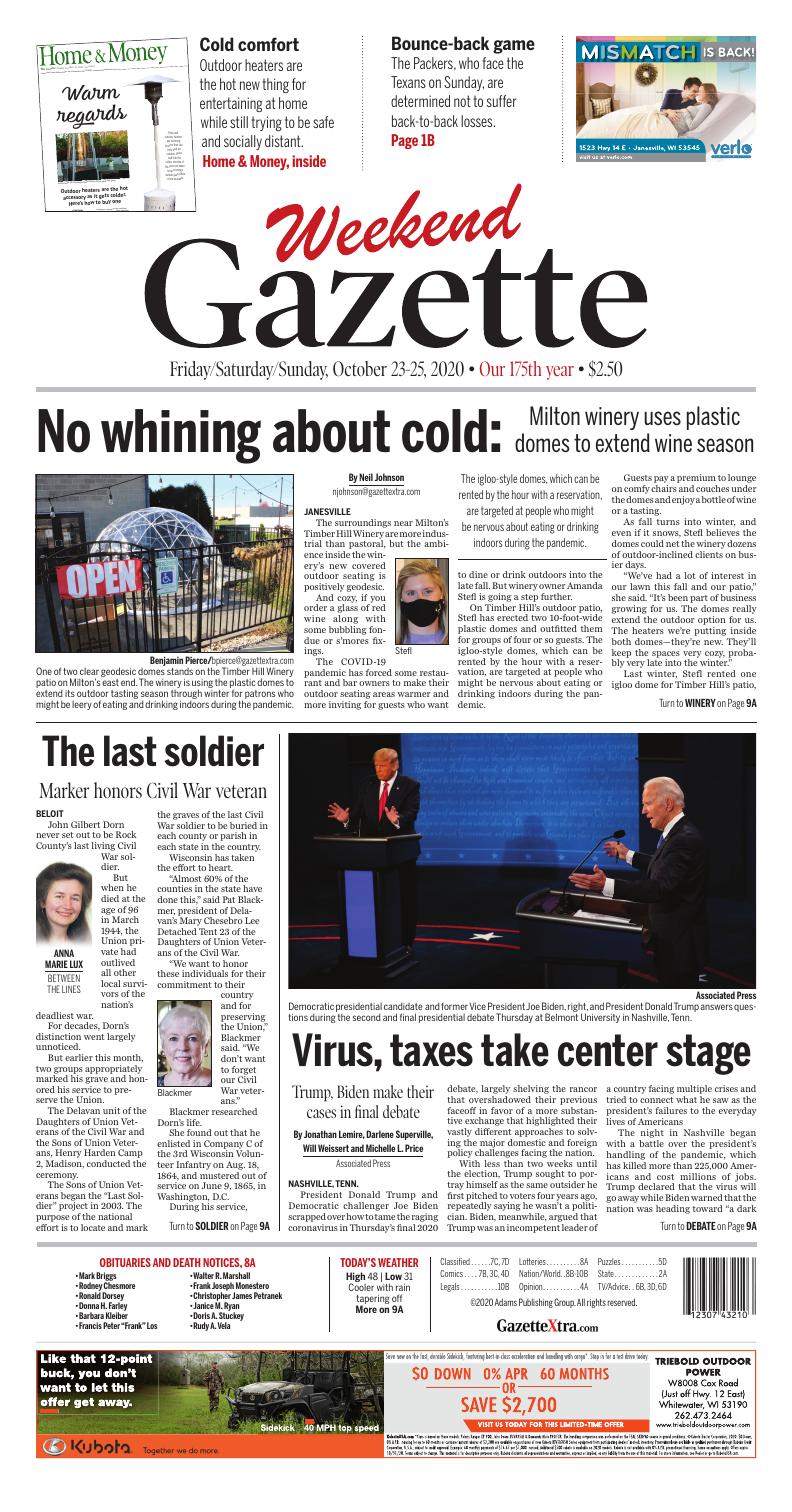 Sunlight pours through the clear covering on one of two plastic domes Timber Hill Winery in Milton is using to create outdoor seating on its patio.

Timber Hill Winery offers two clear domes on its patio for hourlong wine tastings by reservation. Both domes are heated and furnished.

The surroundings near Milton’s Timber Hill Winery are more industrial than pastoral, but the ambience inside the winery’s new covered outdoor seating is positively geodesic.

And cozy, if you order a glass of red wine along with some bubbling fondue or s’mores fixings.

The COVID-19 pandemic has forced some restaurant and bar owners to make their outdoor seating areas warmer and more inviting for guests who want to dine or drink outdoors into the late fall. But winery owner Amanda Stefl is going a step further.

On Timber Hill’s outdoor patio, Stefl has erected two 10-foot-wide plastic domes and outfitted them for groups of four or so guests. The igloo-style domes, which can be rented by the hour with a reservation, are targeted at people who might be nervous about eating or drinking indoors during the pandemic. 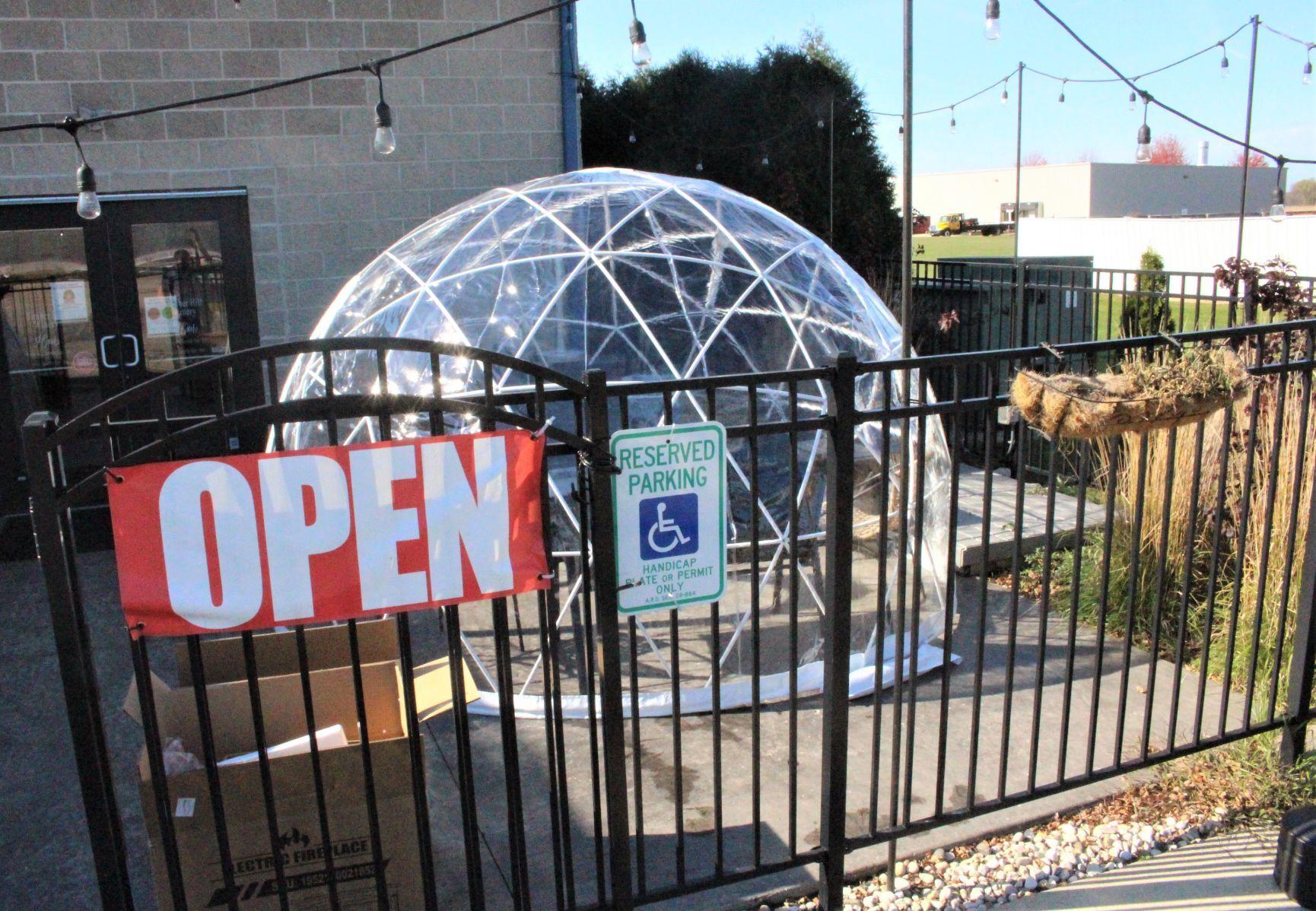 One of two clear geodesic domes stands on the Timber Hill Winery patio on Milton’s east end. The winery is using the plastic domes to extend its outdoor tasting season through winter for patrons who might be leery of eating and drinking indoors during the pandemic.

Guests pay a premium to lounge on comfy chairs and couches under the domes and enjoy a bottle of wine or a tasting.

As fall turns into winter, and even if it snows, Stefl believes the domes could net the winery dozens of outdoor-inclined clients on busier days.

“We’ve had a lot of interest in our lawn this fall and our patio,” she said. “It’s been part of business growing for us. The domes really extend the outdoor option for us. The heaters we’re putting inside both domes—they’re new. They’ll keep the spaces very cozy, probably very late into the winter.”

Last winter, Stefl rented one igloo dome for Timber Hill’s patio, and she said it proved popular until temperatures plummeted below zero in February. That experiment came before COVID-19 was a known quantity, but Stefl thought doubling down on the domes this year would cater to guests still leery about gathering inside.

Both domes will be served by one staff member and cleaned between hourlong reservations. In addition to heaters, the domes have air purifiers to help ventilate the spaces.

It’s just one example of the recent innovations Stefl has tried to make her winery work during the pandemic.

Stefl, a microbiologist-turned-winemaker, said Timber Hill has begun marketing boxed assortments of wine samples and selling them by mail to clients across the country. 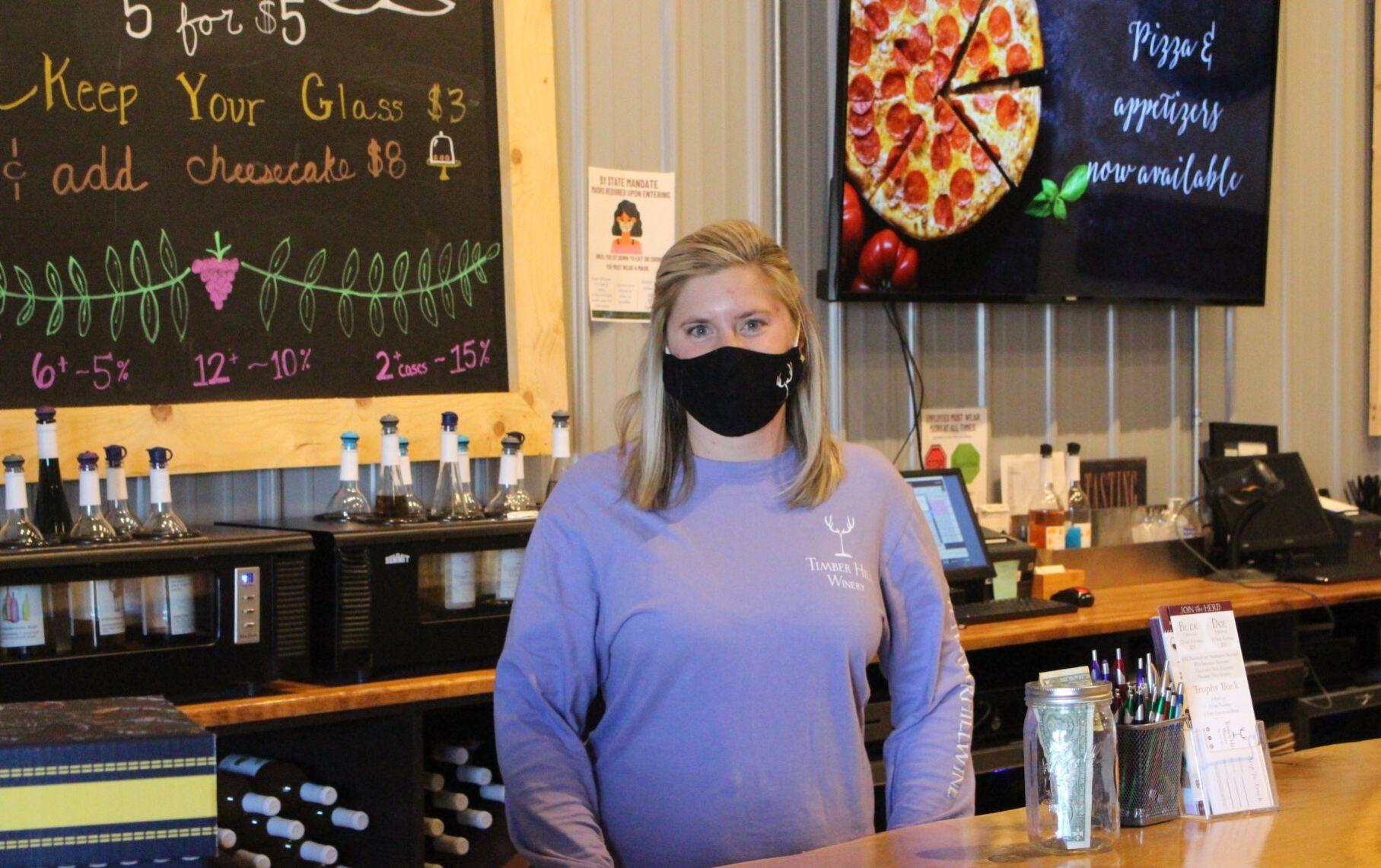 Amanda Stefl, owner and operator of Timber Hill Winery, stands behind the bar in her wine-tasting room on Storr’s Lake Road in Milton. The winery still offers inside tastings by appointment, but Stefl decided to give people the option of tasting wine outside under two domed seating areas.

Locally, the winery also plans to quadruple production of its holiday wines. In the past, it sold holiday wines by the case to members who ordered them. This year, Stefl said, she’ll make holiday wine cases available wholesale at local grocery stores, including Woodman’s.

The Janesville City Council is considering a new city program that would offer $2,000 grants to eligible bars and restaurants to offset the cost of outfitting outdoor areas for cold-weather dining.

Some restaurant and bar owners already have mowed through personal funds or contingency funds to keep their businesses above water under COVID-era safety guidelines, council member Paul Benson said. Those businesses might need an extra boost to add outdoor modifications that give customers more options.

The council Thursday night asked city staff to review Benson’s proposal for a $50,000 loan program and add structure and parameters for applicants that would be fair and equitable.

Wolfe’s suggestion was a welcome one to council members and city staff who were concerned about using general fund balance dollars for the program.

Members were also concerned about the appearance of favoring one business sector over others. Benson said restaurants and bars have disproportionately been impacted by the pandemic.

The council is expected to discuss the program further at its Nov. 9 meeting.

Stefl said federal stimulus funds given to small businesses early on in the pandemic offset the cost of Timber Hill’s most recent upgrades. She plans to apply for a competitive state grant for small businesses that are innovating during COVID-19.

Some Janesville restaurants already have bought propane-powered outdoor heating units and other amenities to keep crowds sitting outside longer. Plastic domes similar to the kind Timber Hill installed have grown in popularity nationwide as a chic, fun way to stretch outdoor dining into winter.

Stefl said a glass of wine seems to make most things better. However, she also believes an uptick in production and sales of Timber Hill wines can be attributed at least partly to the winery’s efforts to offer an experience that feels safer for some customers.

“It’s hard because others aren’t seeing growth right now,” she said. “It’s frustrating, so you don’t want to go overboard celebrating. But I feel like we deserve to celebrate.”

Pat Blackmer, who lives in a historical home in Whitewater, believes in the importance of preserving history. She is president of Delavan’s Mary Chesebro Lee Detached Tent 23 of the Daughters of Union Veterans of the Civil War, which recently marked the grave of John Gilbert Dorn, Rock County’s last living Civil War soldier.

Members of the Daughters of Union Veterans of the Civil War, Mary Chesebro Lee Tent 23, are shown at the grave of John Gilbert Dorn. From left are Susan Fallon, Racine; Nancy Braatz, Janesville; Pat Blackmer, Whitewater; Judy Manning, Waukegan, Illinois; and Sandy Stratmeyer, Janesville. Dorn was the last Civil War soldier to be buried in Rock County. The group recently placed a Last Soldier marker at his burial site at Oakwood Cemetery in Beloit.

But when he died at the age of 96 in March 1944, the Union private had outlived all other local survivors of the nation’s deadliest war.

But earlier this month, two groups appropriately marked his grave and honored his service to preserve the Union.

The Sons of Union Veterans began the “Last Soldier” project in 2003. The purpose of the national effort is to locate and mark the graves of the last Civil War soldier to be buried in each county or parish in each state in the country.

Wisconsin has taken the effort to heart.

“Almost 60% of the counties in the state have done this,” said Pat Blackmer, president of Delavan’s Mary Chesebro Lee Detached Tent 23 of the Daughters of Union Veterans of the Civil War.

“We want to honor these individuals for their commitment to their country and for preserving the Union,” Blackmer said. “We don’t want to forget our Civil War veterans.”

During his service, Dorn fought at the Occupation of Atlanta, the March to the Sea, the Siege of Savannah, the Campaign of the Carolinas, the Battle of Bentonville and the surrender of Confederate Gen. Joseph E. Johnston and his army.

“His family reported that he was ‘justly proud’ when he marched in the Grand Review before President Abraham Lincoln, commander in chief of the Union Army, on May 24, 1865, in Washington D.C.,” Blackmer said.

However, she pointed out that Andrew Johnson was president at the time of the Grand Review because Lincoln died from an assassin’s bullet April 15, 1865.

“Generations later, people are not always aware of history and get confused,” Blackmer said.

The women, who are in their 90s, were born when their fathers were in their 70s.

Civil War veterans who lost their wives often remarried much younger women who cared for them as they aged.

“As a result, there were fathers in their 70s with newborns,” Blackmer said.

Blackmer taught at the Wisconsin School for the Deaf in Delavan for more than 30 years. She has always been interested in history and founded the Delavan chapter, also known as a tent, of the Daughters of Union Veterans in May 2012.

“I felt there needed to be some encouragement for preservation and education, and I really cherish my freedom,” she said. “Considering the fact that my second great-grandfather fought to preserve that freedom in the 1860s, it means even more.”

The Delavan tent has about 40 members.

In addition to remembering veterans of the Civil War, they help current veterans and members of the military.

This year, members sewed masks to protect people during the COVID-19 pandemic. In the past, members have made and donated blankets.

In a normal year, the group has frequent programs with guest speakers and occasionally opens the programs to the public.

“The Civil War was a significant time in our history,” Blackmer said. “I think it is important that our history is preserved and shared.”

Anna Marie Lux is a human interest columnist for The Gazette. Call her with ideas or comments at 607-755-8264 or email amarielux@gazettextra .com. 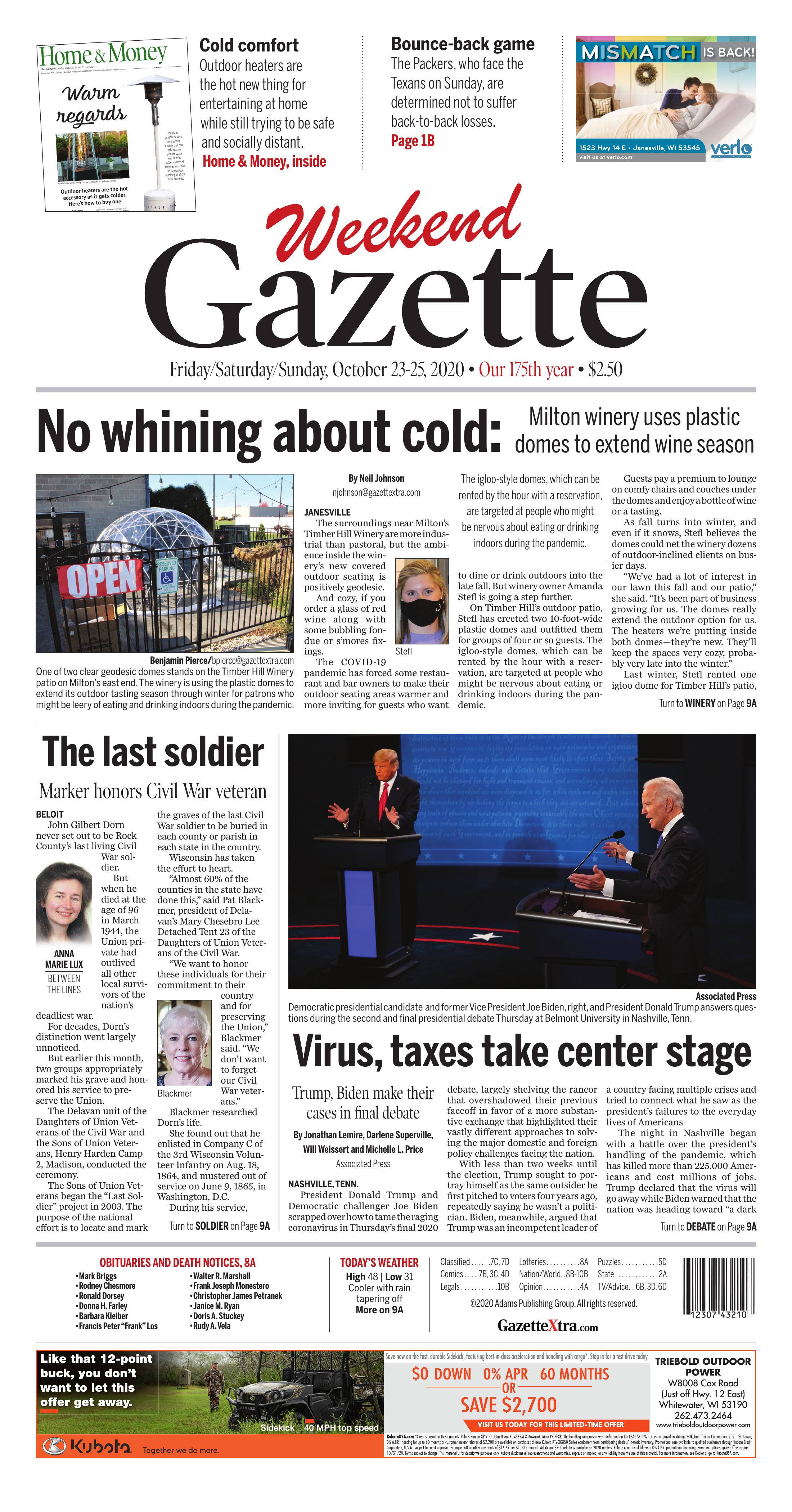