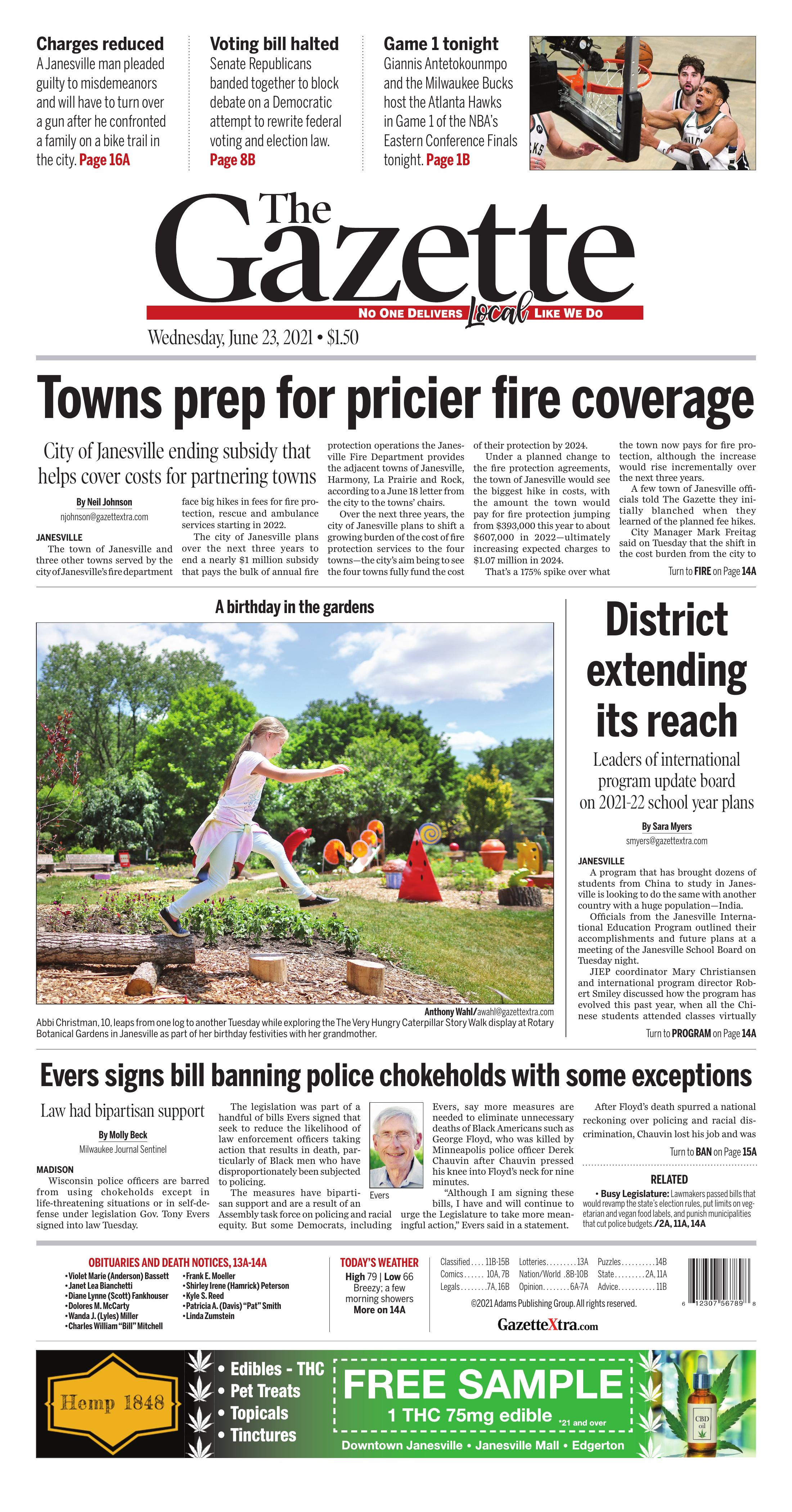 The town of Janesville and three other towns served by the city of Janesville’s fire department face big hikes in fees for fire protection, rescue and ambulance services starting in 2022.

The city of Janesville plans over the next three years to end a nearly $1 million subsidy that pays the bulk of annual fire protection operations the Janesville Fire Department provides the adjacent towns of Janesville, Harmony, La Prairie and Rock, according to a June 18 letter from the city to the towns’ chairs.

Under a planned change to the fire protection agreements, the town of Janesville would see the biggest hike in costs, with the amount the town would pay for fire protection jumping from $393,000 this year to about $607,000 in 2022—ultimately increasing expected charges to $1.07 million in 2024.

That’s a 175% spike over what the town now pays for fire protection, although the increase would rise incrementally over the next three years.

A few town of Janesville officials told The Gazette they initially blanched when they learned of the planned fee hikes.

City Manager Mark Freitag said on Tuesday that the shift in the cost burden from the city to the towns ultimately will reduce by $935,000 what Janesville taxpayers pay for fire protection in the four towns—a subsidy that is projected to grow yearly.

Freitag said the subsidy model for town fire protection that the city has used since 2012 has become “unsustainable” as the Janesville Fire Department experiences an increase in ambulance calls. State law also limits how much shared state revenue the city can receive or increase its tax levy to pay for services.

The cost of buying and equipping one ambulance and staffing it with three shifts worth of medics alone could add $750,000 to the department’s costs—and the operational costs would be ongoing.

“Every year, we continue to grow and lead the state in growth. But we can’t even maintain what we did in a previous year, let alone grow to catch up to that expansion,” Freitag said. “So we’re just looking for ways that we can continue to provide great quality service to our residents and certainly to the towns. But in the towns’ case, they need to pay their fair share, and they’ve not been doing that for a while.”

Under the planned contract, the town of Rock would ultimately take on an expected fire protection charge by 2024 of $282,000 while the town of La Prairie will see a charge that same year of $152,000, and the town of Harmony would see an expected charge of $146,000.

In 2021, the increases for Rock and La Prairie would be proportionally smaller than the hike the town of Janesville would see.

Those projected costs will increase over a three-year span based on the assessed value of the town properties covered under contract by the Janesville Fire Department.

The parts of the town of Janesville covered by the city’s fire department are more densely developed with housing than the other towns, which creates more assessed value for individual properties.

Freitag said the city would impose this gradual, three-year shift in costs to the towns until 2024, after which the city would end the subsidy city taxpayers now pay toward town fire protection.

Town of Janesville town Chairman Bruce Schneider said the town just received the notice of the fee increases, and he had not had a chance to dig into the details.

On the surface, Schneider said the increase “doesn’t sound good” for the town.

Gary Fox, a town of Janesville supervisor, said a near doubling of its fire protection costs in a couple of years is “a tremendous change.”

“Frankly, I don’t know where we’re going to get the money to do it,” Fox said. “We haven’t discussed it yet as a town (board), but we’re going to have to see what to do. Because, yeah, it puts us in a hard place.”

Fox said while some towns in the Milton fire district have begun shopping around for emergency services through other local fire departments, he believes the town of Janesville has few alternatives to contracting with the city of Janesville for fire protection.

That, Fox said, is in part because the town has miles of private, natural gas pipeline running through parts of it. That presents responsibilities for fire protection that not every local fire agency might be willing to take on.

Wisconsin police officers are barred from using chokeholds except in life-threatening situations or in self-defense under legislation Gov. Tony Evers signed into law Tuesday.

The legislation was part of a handful of bills Evers signed that seek to reduce the likelihood of law enforcement officers taking action that results in death, particularly of Black men who have disproportionately been subjected to policing.

The measures have bipartisan support and are a result of an Assembly task force on policing and racial equity. But some Democrats, including Evers, say more measures are needed to eliminate unnecessary deaths of Black Americans such as George Floyd, who was killed by Minneapolis police officer Derek Chauvin after Chauvin pressed his knee into Floyd’s neck for nine minutes.

“Although I am signing these bills, I have and will continue to urge the Legislature to take more meaningful action,” Evers said in a statement.

After Floyd’s death spurred a national reckoning over policing and racial discrimination, Chauvin lost his job and was found guilty of murder.

Evers last year called a special session on policing, but Republican lawmakers who control the Legislature took no action. At the same time, Assembly Speaker Robin Vos formed the task force that helped develop many of the bills Evers signed Tuesday.

Hours after Evers signed the bill limiting chokeholds, Assembly lawmakers passed legislation that carries criminal penalties and would require officers to report colleagues if they use unnecessary force and to intervene when they see colleagues use excessive force.

The bill was amended by Republicans on a party line vote to remove language that would require officers to intervene if they observe, or reasonably should have observed, use of force that is not considered reasonable under the legislation.

Rep. Shelia Stubbs, a Madison Democrat who co-led an Assembly task force on policing, expressed anger at Republicans agreeing to make changes requested by Milwaukee’s police union without broad discussion. A union representative sat on the task force but sought changes outside the panel’s meetings.

“Letting a single lobby group halt progress is a disservice to the work of the task force and the communities that each of us serve,” Stubbs said. “By delaying a vote in this chamber and forcing another passage through the Senate, we are risking—let me pause right there—we are risking—the bill’s arrival to Gov. Evers’ desk.”

While Stubbs opposed the amendment, she said the legislation that passed was positive and would hold law enforcement officers “to their highest standard.”

Republican Rep. Jim Steineke, who led the task force with Stubbs and introduced the changes, said the amended legislation is still effective and argued Republicans and Democrats worked together closely on the legislation.

“Both Republicans and Democrats can come together and solve some of the bigger issues of the day if we’re willing to set some of the nonsense aside,” Steineke said.

The bill was amended to delay implementation until 2022, requiring a new vote from lawmakers in the state Senate.

Evers also signed Senate Bills 122 and 123, which require the state Department of Justice to collect data and publish an annual report on use-of-force incidents involving police with demographic information and require police departments to publish online their use-of-force policies.

The bills Evers signed Tuesday include:

The Assembly, for now at least, abandoned plans to take up another use-of-force bill because of concerns brought forward by the Milwaukee Police Association.

That bill, Senate Bill 120, would require officers to report on the use of force and intervene when they see colleagues use excessive force. It would also prohibit disciplining an officer for reporting a use-of-force violation. 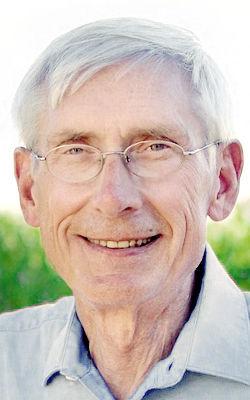 A program that has brought dozens of students from China to study in Janesville is looking to do the same with another country with a huge population—India.

Officials from the Janesville International Education Program outlined their accomplishments and future plans at a meeting of the Janesville School Board on Tuesday night.

JIEP coordinator Mary Christiansen and international program director Robert Smiley discussed how the program has evolved this past year, when all the Chinese students attended classes virtually from China.

Smiley said 32 Chinese students studied in Janesville in 2019-20 and that 42 attended virtually during the pandemic year.

Smiley said 25 students would be in Janesville for the coming school year, while 35 more would attend classes virtually.

Students who travel to Janesville pay $28,000 for tuition, room and board. Virtual students pay $6,600, Smiley said.

Smiley said the district has a memorandum of understanding with school officials in India and has hopes of bringing students here in the near future.

The program also helped the district forge a virtual sister-school relationship between Janesville’s Jackson Elementary School and a school in Cali, Colombia, over the past year.

Smiley and Christiansen have also made contacts with countries such as Vietnam, Pakistan, Kazakhstan and Saudi Arabia. They also hope to establish scholarships to allow for more travel opportunities.

Kevin Murray, a longtime critic of the program, had concerns about the health and safety of Janesville students and staff and asked about health protocols and vaccinations for Chinese students coming to Janesville this fall.

He also asked what the benefits were for Janesville.

“Why should I care about a Chinese student getting accepted into a college here?” Murray asked.

Out of the 153 students who have participated in the program so far, all were accepted to universities in the United States or other countries.

In other business Tuesday, the Janesville School Board: