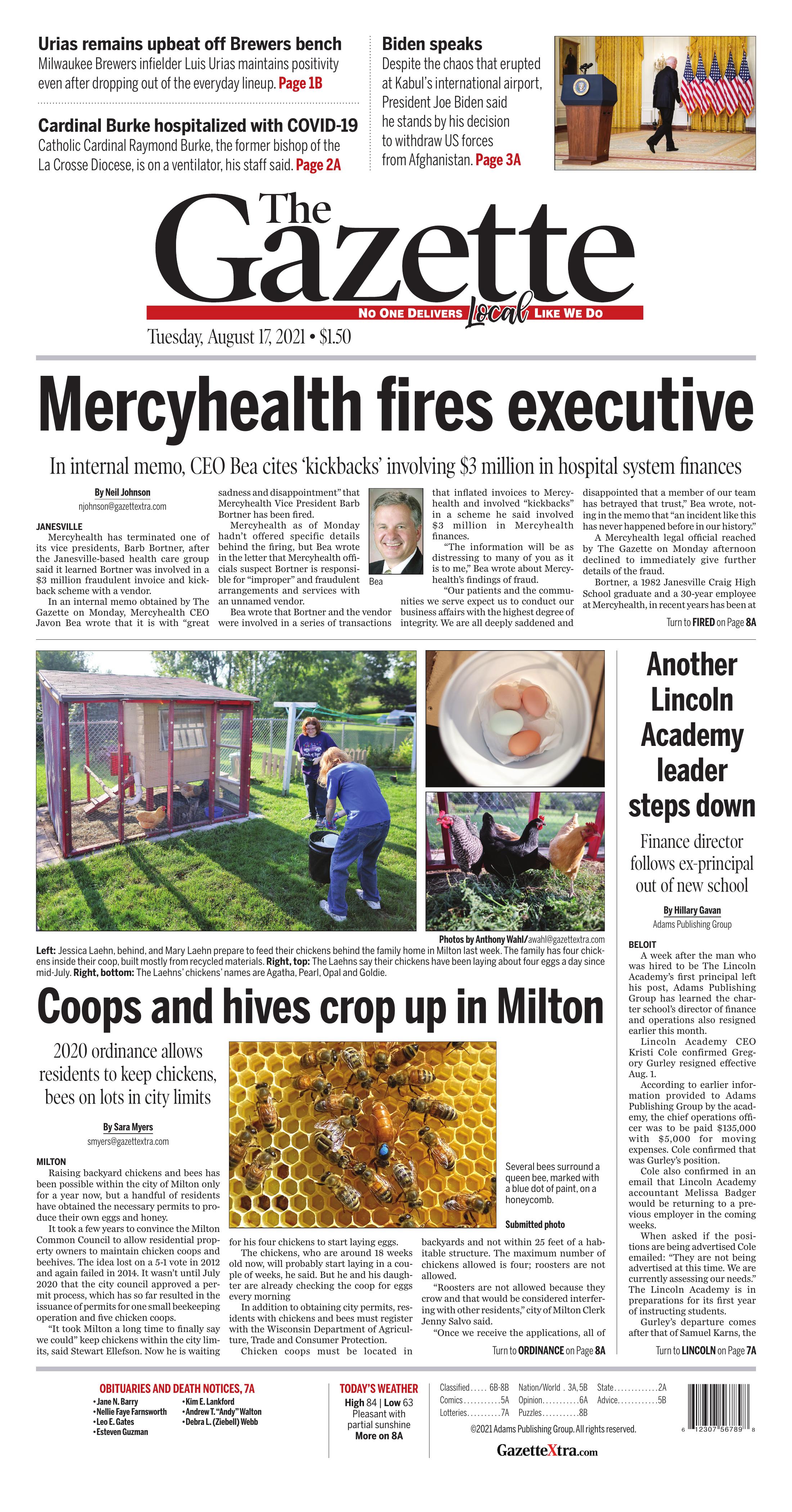 Mercyhealth has terminated one of its vice presidents, Barb Bortner, after the Janesville-based health care group said it learned Bortner was involved in a $3 million fraudulent invoice and kickback scheme with a vendor.

In an internal memo obtained by The Gazette on Monday, Mercyhealth CEO Javon Bea wrote that it is with “great sadness and disappointment” that Mercyhealth Vice President Barb Bortner has been fired.

Mercyhealth as of Monday hadn’t offered specific details behind the firing, but Bea wrote in the letter that Mercyhealth officials suspect Bortner is responsible for “improper” and fraudulent arrangements and services with an unnamed vendor.

Bea wrote that Bortner and the vendor were involved in a series of transactions that inflated invoices to Mercyhealth and involved “kickbacks” in a scheme he said involved $3 million in Mercyhealth finances.

“The information will be as distressing to many of you as it is to me,” Bea wrote about Mercyhealth’s findings of fraud.

“Our patients and the communities we serve expect us to conduct our business affairs with the highest degree of integrity. We are all deeply saddened and disappointed that a member of our team has betrayed that trust,” Bea wrote, noting in the memo that “an incident like this has never happened before in our history.”

A Mercyhealth legal official reached by The Gazette on Monday afternoon declined to immediately give further details of the fraud.

Bortner, a 1982 Janesville Craig High School graduate and a 30-year employee at Mercyhealth, in recent years has been at the helm of the regional health care group’s marketing and public affairs division.

Bea said Bortner has been removed from her vice president post and also fired from the Mercyhealth Development Foundation.

The Development Foundation is Mercyhealth’s philanthropic arm, a division of the group that’s worth $35 million, according to the group’s most recently reported nonprofit tax filings.

Including major hospitals in Janesville, Walworth County and Rockford, Illinois, Mercyhealth operates seven hospitals and more than 80 primary care and specialty facilities in southern Wisconsin and northern Illinois. Mercyhealth’s hospital and health care division is estimated to be a $237 million annual operation, the most recent tax records show.

As of Monday, Bortner was still listed on some web searches as a Mercyhealth vice president, but it appeared her personal profile had been scrubbed from the business social media website LinkedIn.

Bea did not indicate in the letter the timeframe of the suspected fraud or when Mercyhealth discovered altered vendor invoices and other evidence of fraud.

Mercyhealth is awaiting more information from “investigating authorities,” but the group now has begun severing ties with the vendor believed to have been involved.

It wasn’t clear if Mercyhealth intends to pursue criminal charges, but Bea wrote that Mercyhealth now is asking a third-party consultant to review the group’s vendor management and invoicing practices.

Jessica Laehn, behind, and Mary Laehn prepare to feed their chickens behind the family home in Milton last week. The family has four chickens inside their coop, built mostly from recycled materials.

A newborn bee emerges from a honeycomb cell. Beekeepers are now allowed to keep hives—with certain restrictions—on residential lots in the city of Milton.

A honey bee cracks into a grape.

Raising backyard chickens and bees has been possible within the city of Milton only for a year now, but a handful of residents have obtained the necessary permits to produce their own eggs and honey.

It took a few years to convince the Milton Common Council to allow residential property owners to maintain chicken coops and beehives. The idea lost on a 5-1 vote in 2012 and again failed in 2014. It wasn’t until July 2020 that the city council approved a permit process, which has so far resulted in the issuance of permits for one small beekeeping operation and five chicken coops.

“It took Milton a long time to finally say we could” keep chickens within the city limits, said Stewart Ellefson. Now he is waiting for his four chickens to start laying eggs.

The chickens, who are around 18 weeks old now, will probably start laying in a couple of weeks, he said. But he and his daughter are already checking the coop for eggs every morning

In addition to obtaining city permits, residents with chickens and bees must register with the Wisconsin Department of Agriculture, Trade and Consumer Protection.

Chicken coops must be located in backyards and not within 25 feet of a habitable structure. The maximum number of chickens allowed is four; roosters are not allowed.

“Roosters are not allowed because they crow and that would be considered interfering with other residents,” city of Milton Clerk Jenny Salvo said.

“Once we receive the applications, all of the diagonal and abutting properties receive a notice,” she said. “They (other residents) have 14 days to object to the application. If there is an objection, then it goes to the city or city council and they’re able to discuss it. The council makes the final decision on if an application is approved or denied.” 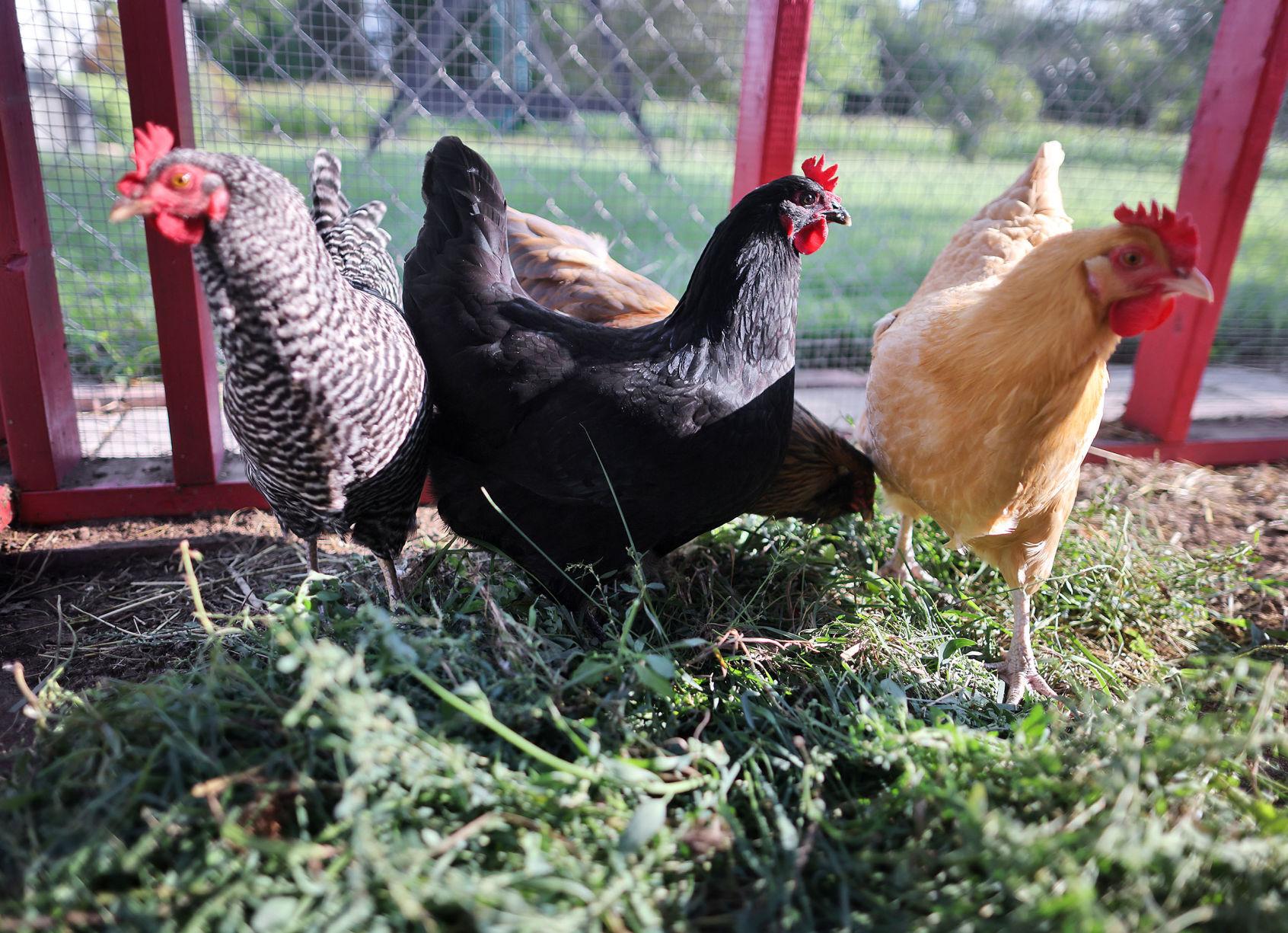 The four chickens kept by the Laehn family behind their Milton home.

Members of the Laehn family were interested in having a chicken coop for many reasons and were happy to finally be able to obtain a permit last year.

“I have a degree in environmental science and I’ve always loved animals,” Jessica Laehn said. “We wanted to raise some chickens because we wanted eggs. And we enjoy them as pets, so it’s a mix of both a farm animal and pet.”

Laehn’s father, Larry, said he was interested in having a coop on the property, too.

“It is so much healthier for you,” Larry Laehn said. “The eggs are raised locally and are better than eggs raised in large hatcheries.”

The family made their chicken coop out of repurposed wood.

“It’s bigger than a regular chicken coop from Farm & Fleet,” Jessica Laehn said. “It’s built within the fenced area. Right now we’re now letting (the chickens) run around because we have a garden and they eat everything.”

In mid-July, the family’s four chickens—named Agatha, Pearl, Opal and Goldie—all started laying eggs consistently. The family will find three to four eggs in the coop each day.

“The eggs are different colors because we have different breeds. We even have green eggs, so the whole green eggs and ham thing is real,” Jessica said, with a laugh.

Each morning, Jessica and Larry check on all four chickens and feed them leftover fruits and vegetables as a treat. 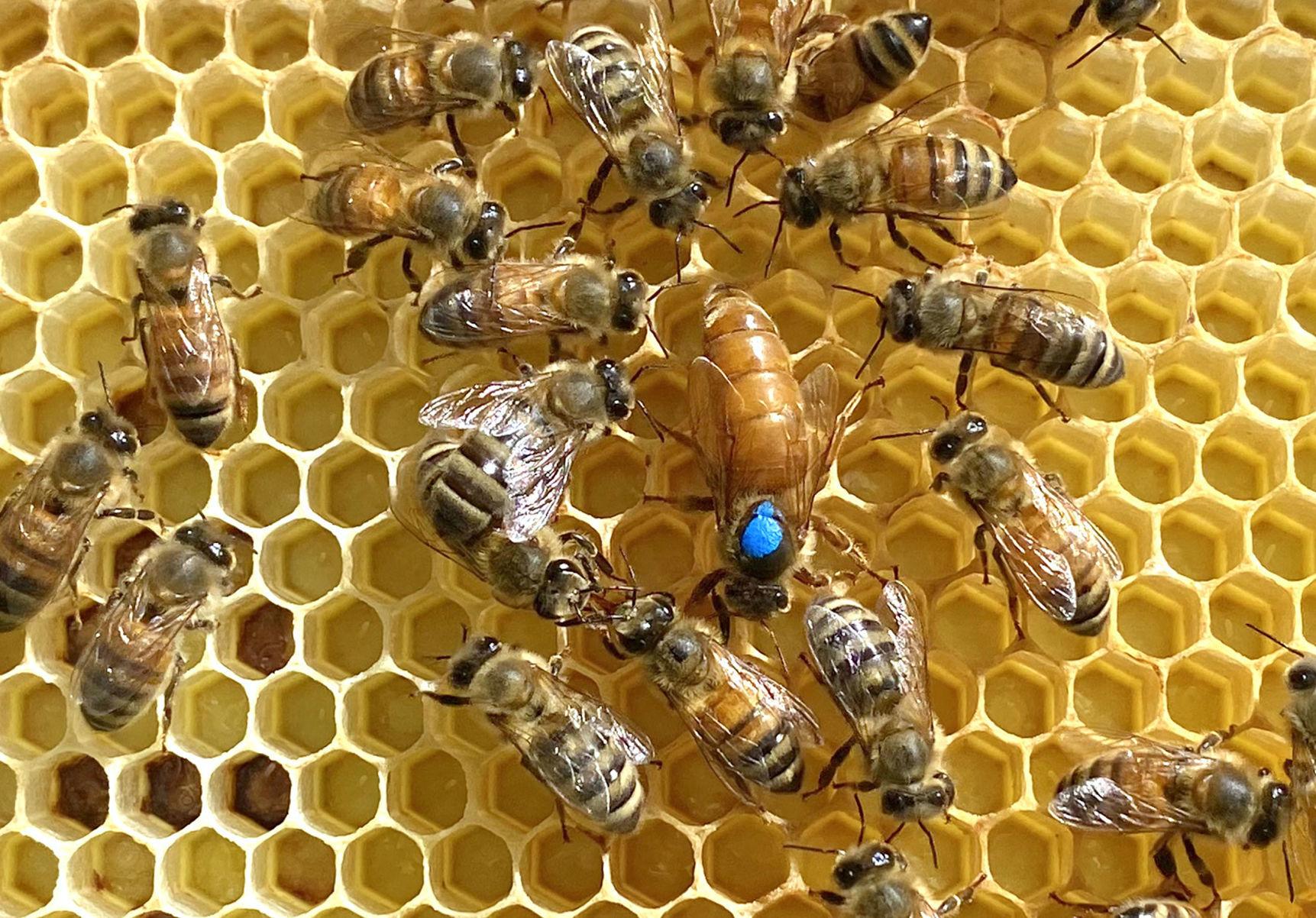 The painted dot marks the queen bee in a hive.

After helping put together a large garden near his house, Lucas Murphy thought having a beehive would be a great way to help support pollination in the area. First though, he needed some training.

To have a beehive, residents must obtain a one-time permit. The requirements are somewhat different from those to keep chickens.

One requirement is a hive must be within 200 feet from the center of the property where it is kept and cannot be within 25 feet of any dwellings, porches, gazebos, decks, swimming pools or other structures on adjoining parcels. The city allows only honeybees and a maximum of two hives per parcel.

“An interesting part of the permit is that you must be considered a certified beekeeper. They do need to take a certification course,” Salvo said.

Murphy said he enrolled in an inexpensive program that required him to watch a series of videos.

“They give you a worksheet to go with each video,” he said.

After his training, Murphy established two hives this past spring. He said he has around 3,000 bees per colony. If the bees produce enough wax and honey, Murphy will often take some for himself. But only when there’s enough for the bees themselves.

“In the first year, you never know if you’re going to be able to harvest any honey because you have to make sure the bees have enough to survive the winter,” he explained.

Murphy said he is more interested getting “the pollinators up” for him and his gardening neighbors.

That same concern over the pollinator population motivated a town of Milton couple and resulted in a honey-producing business.

In 2013, Grace and Gary Stockman watched the documentary “Vanishing of the Bees,” a 2009 film on Netflix about the then mysterious disappearance of honeybees around the world.

“After watching that, we were stunned and alarmed that the plight of the honeybee was being affected so much by herbicides and pesticides,” Grace Stockman said. “My husband turned and said to me, ‘I would like to raise bees.’ I thought, that’s crazy, we’ll be stung!”

Gary Stockman recalled as a child having a neighbor who had bees. The Stockmans eventually met a beekeeper, which only increased their fascination with beekeeping.

The couple now has 35 hives on their property out in the country and run Rustic Road Pure Honey as their business. And since the couple doesn’t live in the city of Milton, they didn’t need to obtain a permit.

“We are flourishing this summer,” Grace said. “We have tons of honey, whereas we have heard from other beekeepers (who are) struggling with their bees not bringing in any honey.”

The honey is sold out of their home, at Hawk’s Orchard and at the Milton Farmers Market. 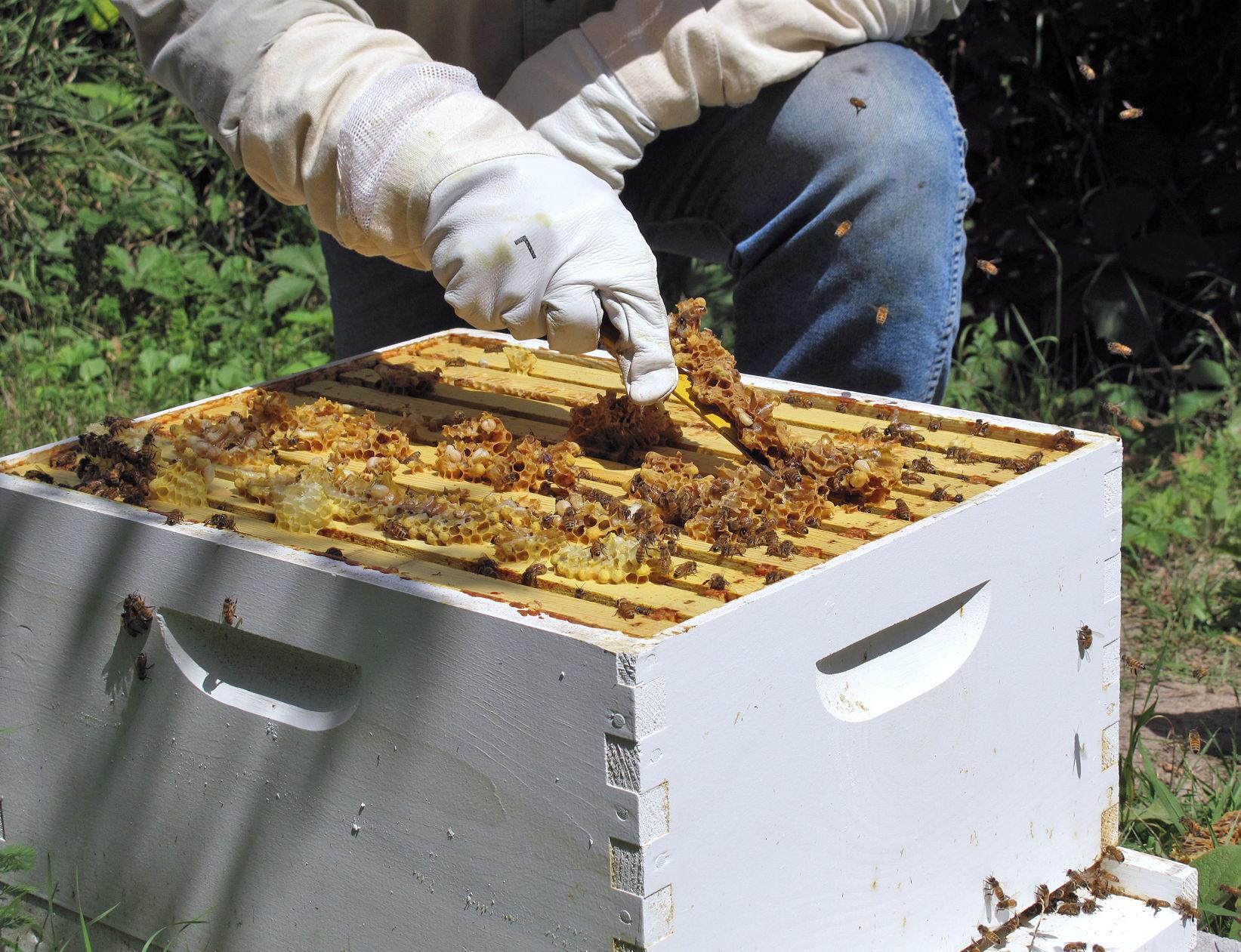 The Lincoln Academy charter school is preparing for its first school year. In recent weeks it has seen the departure of its principal and the finance and operations officer.

A week after the man who was hired to be The Lincoln Academy’s first principal left his post, Adams Publishing Group has learned the charter school’s director of finance and operations also resigned earlier this month.

According to earlier information provided to Adams Publishing Group by the academy, the chief operations officer was to be paid $135,000 with $5,000 for moving expenses. Cole confirmed that was Gurley’s position.

Cole also confirmed in an email that Lincoln Academy accountant Melissa Badger would be returning to a previous employer in the coming weeks.

When asked if the positions are being advertised Cole emailed: “They are not being advertised at this time. We are currently assessing our needs.” The Lincoln Academy is in preparations for its first year of instructing students.

Gurley’s departure comes after that of Samuel Karns, the first principal selected by The Lincoln Academy. In an email last week, Cole confirmed Karns was no longer in the position and that Priscilla El-Amin was selected to serve as principal as the school opens this fall.

Adams Publishing Group requested Karns’ resignation letter, the separation agreement between him and the school, and any and all financial payouts or arrangements related to ending his employment with The Lincoln Academy in an open records request. The school’s special projects manager Jean Marie McKearn said in an email on Aug. 10 that “no such documents exist.”

Adams Publishing Group has since requested Karns’ contract and Gurley’s resignation letter, separation agreement, and any and all financial payouts or arrangements related to ending his employment and contract.

The Lincoln Academy, 608 Henry Ave., is a public charter school for 4-year-old kindergarten through 12th grade. The school is authorized through the UW System, not the Beloit School District. Tuition is free to families, and enrollment is open to any Wisconsin student. As a public school, it will be funded by taxpayer dollars but can also receive private donations and grant funds.

The first day of school is planned for Sept. 1.