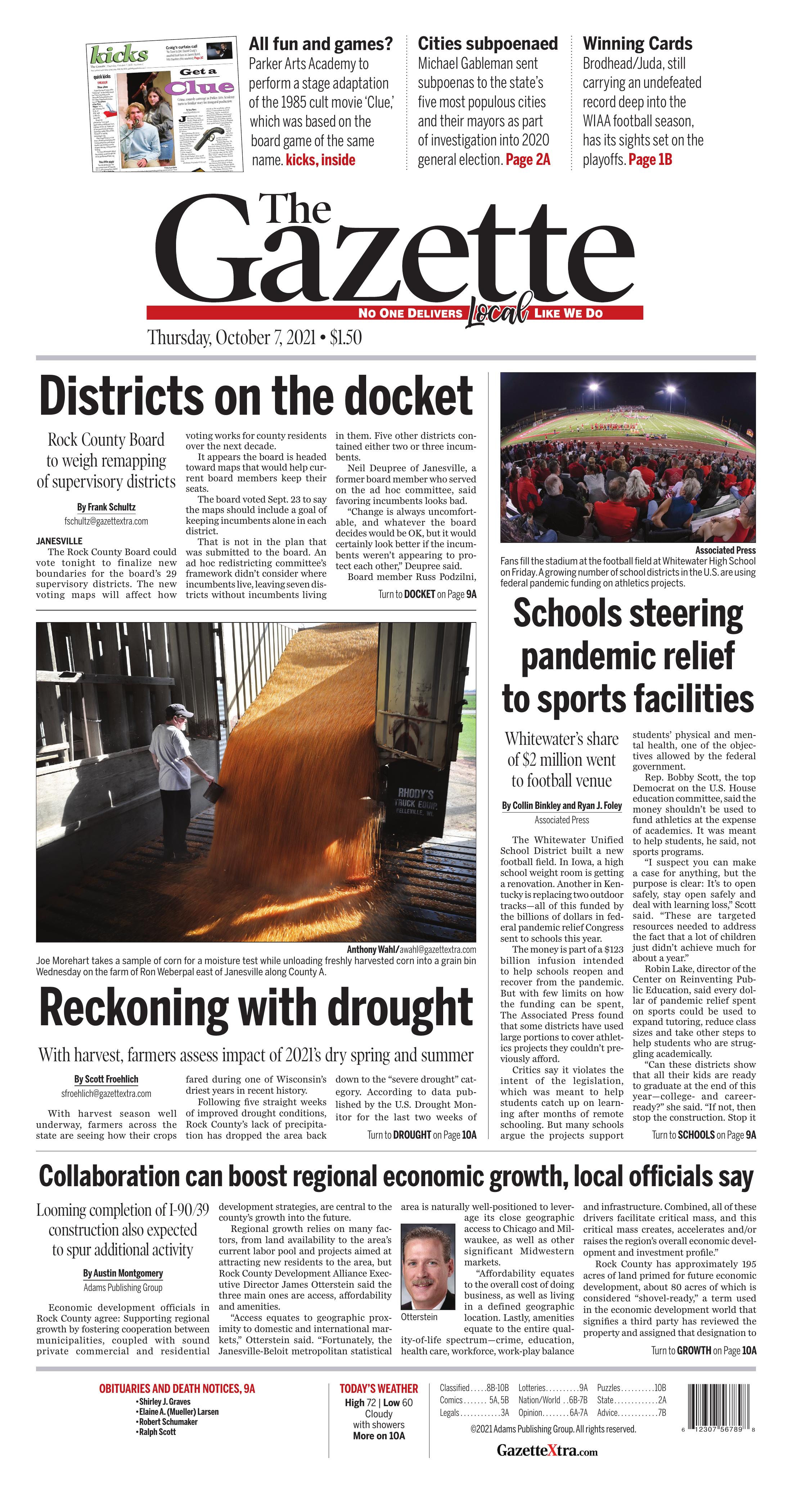 Agriculture
top story centerpiece
Rock County's drought woes continue, but a mild winter could be on the horizon
Anthony Wahl

Joe Morehart takes a sample of corn for a moisture test while unloading freshly harvested corn into a grain bin Wednesday on the farm of Ron Weberpal east of Janesville along County A.

Joe Morehart opens another trailer door allowing for more corn to fall while loading into a grain bin Wednesday on the farm of Ron Weberpal east of Janesville along County A.

Kernels of corn remain on the slats of a grain bin Wednesday on the farm of Ron Weberpal east of Janesville along County A.

With harvest season well underway, farmers across the state are seeing how their crops fared during one of Wisconsin’s driest years in recent history.

Following five straight weeks of improved drought conditions, Rock County’s lack of precipitation has dropped the area back down to the “severe drought” category. According to data published by the U.S. Drought Monitor for the last two weeks of September, the percentage of the county experiencing severe drought conditions jumped from 19% to 75%.

Recent rainfall isn’t expected to improvement conditions. If anything, the precipitation that fell Sept. 21-28 maintained the status quo.

“I think the severe drought (status) put in last week is a good assessment,” she said. “I don’t expect any changes.”

Marquardt noted that while farmers prefer dry days during the end of the season and don’t rely on the rain as much after they’ve harvested crops, rain over the next several months would be critical.

“We are expecting more changes to (weather) patterns looking up,” she said. “There is a possibility for improvement over the next few weeks.”

Despite the encouraging signs, even an elevated chance of precipitation in the near future isn’t going to help reverse course. “I don’t think the drought will completely go away in the next few weeks or months just because the longer term deficits are pretty high,” Marquardt said.

Things are not all doom and gloom, however, as winter is forecast to bring a warmer and wetter weather system due to an expected climate pattern known as La Nina.

“In simple terms, this means below normal sea surface temperatures in the Pacific Ocean, and that’s correlated to the weather over the United States,” Marquardt said.

If this forecast comes to fruition, she said it will lead to a wetter winter for Rock County. A wetter winter could mean relief for rain-starved soils and bodies of water that dipped below average levels. In a region where deficits total anywhere from 9 to 14.5 inches since the beginning of the year, a more temperate end to the year could be welcomed.

“Anything we get in the winter will help bring deficits back closer to normal and help replenish the soil moisture,” Marquardt said. “But if it’s snow, it will just be sitting there waiting for spring to recharge things.” 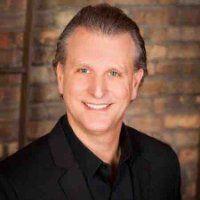 Economic development officials in Rock County agree: Supporting regional growth by fostering cooperation between municipalities, coupled with sound private commercial and residential development strategies, are central to the county’s growth into the future.

Regional growth relies on many factors, from land availability to the area’s current labor pool and projects aimed at attracting new residents to the area, but Rock County Development Alliance Executive Director James Otterstein said the three main ones are access, affordability and amenities.

“Access equates to geographic proximity to domestic and international markets,” Otterstein said. “Fortunately, the Janesville-Beloit metropolitan statistical area is naturally well-positioned to leverage its close geographic access to Chicago and Milwaukee, as well as other significant Midwestern markets.

“Affordability equates to the overall cost of doing business, as well as living in a defined geographic location. Lastly, amenities equate to the entire quality-of-life spectrum—crime, education, health care, workforce, work-play balance and infrastructure. Combined, all of these drivers facilitate critical mass, and this critical mass creates, accelerates and/or raises the region’s overall economic development and investment profile.”

Rock County has approximately 195 acres of land primed for future economic development, about 80 acres of which is considered “shovel-ready,” a term used in the economic development world that signifies a third party has reviewed the property and assigned that designation to make the site more appealing to prospective developers and businesses.

“Whether this acquisition occurs directly or via a third-party arrangement, keeping the land inventory well stocked is absolutely essential for remaining competitive,” Otterstein said. “Given the complexities and related cost components of today’s economic development projects, owners and investors alike are continually identifying reasons to eliminate a community or location from their consideration list.”

“We as a city and a region are competing against thousands of other towns in America,” Ruffini said. “When a business is deciding to go there, what are we doing to set ourselves apart?”

A report published in summer 2020 aimed at spurring economic growth in Beloit and the stateline area looks to erase boundary lines and show the collective spending power of the region to attract future development.

The 10-Mile City Report encompasses the area extending 10 miles from Beloit’s city center to include three counties, 14 zip codes and 37 census tracts. In the study area, there were 3,360 businesses that employed an average of 50,583 people with an average unemployment rate of around 4%, according to the report.

Most of the employed population is within the services and manufacturing sectors—42.3% and 18.6%, respectively. In recent years, however, retail trades and food service combined have grown to about 20% of all employees, the study shows.

The greatest areas for retail opportunities in the area are reflected in the study through calculating annual retail sales with consumer demand. The difference between the two indicate potential retail opportunities. In total, the area has a retail trade supply of $1.53 billion and consumer demand of $1.45 billion, leaving an $82 million spending gap that’s filled by consumer spending from outside the 10-mile area, the report said.

In terms of residential growth, 2020 Census data shows the towns of Beloit, Fulton, Janesville and Milton have grown in population since 2010, along with the cities and villages of Clinton, Edgerton, Evansville, Janesville, Milton and Orfordville. Population growth remained flat in the city of Beloit.

“In Beloit we really have done an amazing job of bringing the commercial to our community,” Gerbitz said. “That was a focus of Hendricks Commercial/Geronimo Hospitality. We knew early on with the Beloit unemployment rate that we needed jobs first. The growth here in jobs has been spectacular and yet diverse at the same time.”

The Gateway area in Beloit continues to be a hotbed of interest for businesses looking to relocate or build new in the area, attracting growth to Beloit’s business base. The largest project there has been Amazon’s new facility.

“Nearly two decades ago, we broke ground in the business park and have since seen thousands of jobs come to Beloit. The advanced planning by community and economic leaders back then prepared the way to provided needed jobs to support Beloit families,” said GBEDC Board of Directors President Frank McKearn.

Commercial Property Group partner Joel Patch said much like the development of the Gateway area, the city of Beloit “must expand its boundaries” and he added that the Shopiere Road/Interstate 90/39 interchange was “critical” for the city to naturally progress.

Boundary agreements can also play into regional growth, officials said, with Otterstein noting that much like other forms of legally binding contracts, the can become “politically charged and contested.”

Gerbitz highlighted fast-paced growth spurred by cooperation between municipalities in other parts of the country, specifically Boise, Idaho, and surrounding communities, as a key reason the Beloit and greater Rock County area can thrive through working together.

“They are collaborative in their efforts, that’s why it works so well,” Gerbitz said. “We need to take that same approach here and not become such a bunch of politicians and remember the greater good of our entire community is what truly matters.”

Patch said he understands why boundary agreements are put in place, but said they run the risk of creating a “dead stop” to a municipality’s own growth.

“Agreements should be reviewed on a yearly basis or biannually,” Patch said.

The path to continued regional growth could lie in part with the upcoming completion of the Interstate 90/39 and Interstate 43 interchange, officials said, citing the new entry into Beloit from the east as the Milwaukee Road entrance to Beloit shifts as part of the realignment.

“I think the overall picture of the Beloit area is that commercial and residential growth will continue along major corridors,” Ruffini said. “The major corridors will continue to play a large role in the story. Milwaukee Road as we know it is going to change in a few months. That new entrance is going to be much different than we were used to. The extension of Milwaukee Road will be one of the first areas we might see new growth.”