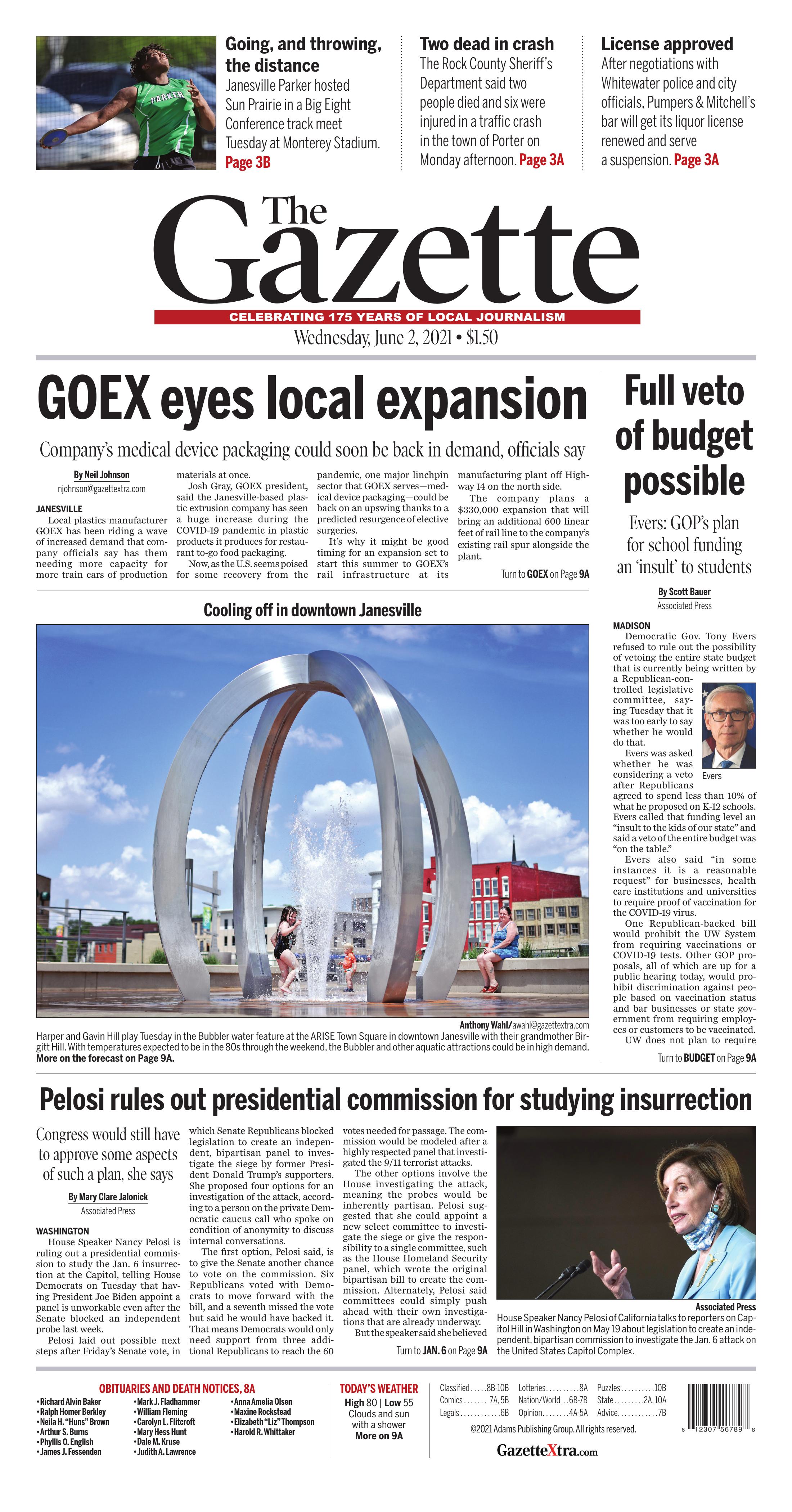 GOEX is expanding its rail infrastructure to help with transporting goods in and out of its manufacturing facility at 802 Highway 14 in Janesville.

Local plastics manufacturer GOEX has been riding a wave of increased demand that company officials say has them needing more capacity for more train cars of production materials at once.

Now, as the U.S. seems poised for some recovery from the pandemic, one major linchpin sector that GOEX serves—medical device packaging—could be back on an upswing thanks to a predicted resurgence of elective surgeries.

It’s why it might be good timing for an expansion set to start this summer to GOEX’s rail infrastructure at its manufacturing plant off Highway 14 on the north side.

The company plans a $330,000 expansion that will bring an additional 600 linear feet of rail line to the company’s existing rail spur alongside the plant.

The city of Janesville awarded a construction bid last week as the local agent of a state Department of Transportation grant for the project. The grant will reimburse half of GOEX’s costs for the rail expansion.

Gray called the purpose for the rail spur expansion “elementary.” He said as the company’s production output over the last year has grown and become more varied, so has GOEX’s need to bring in by rail more and different types of plastic pellets—the main ingredient in plastic products GOEX extrudes.

And it needs more space to move around train cars to juggle different jobs at the plant.

“We just need more parking spots from which to pull,” Gray said. “Because we’re pulling so many different products off the rail, it helps with the flexibility in the inventory control with being able to put different materials and in a different sequence and on two different tracks.”

GOEX will get those extra parking spots via a grant process that has rolled out over the past several months, and the project should roll ahead this year.

Gray said the project will take about two weeks to complete, although it likely won’t roll out until later this summer because of manufacturing lead times on components used to build out the extra spur.

Gray said the upgrade will help the plant gear up for a transition—or, at the very least, a boost—in production.

For months during the pandemic, Gray said, one of the hottest tickets at GOEX has been extruded plastic that is geared for use in restaurant industry food packaging. The boom in those products goes hand in hand with a tectonic shift in American dining habits toward home cooking along with curbside pickup and carryout at restaurants.

Gray said it’s not clear how fast Americans might shift back to dining in as the country bounces back from the pandemic, but he said analysts believe there could be a resurgence in elective surgeries and other procedures, which saw a dramatic slowdown during the pandemic.

Pent-up demand for surgeries could in turn produce an increase in demand for plastics GOEX sells for medical packaging, Gray indicated.

Senate Majority Leader Chuck Schumer, D-N.Y., speaks to reporters after final votes going into the Memorial Day recess, at the Capitol in Washington, Friday, May 28, 2021. Senate Republicans successfully blocked the creation of a bipartisan commission to study the Jan. 6 attack on the Capitol by rioters loyal to former President Donald Trump. (AP Photo/J. Scott Applewhite)

House Speaker Nancy Pelosi of California talks to reporters on Capitol Hill in Washington on May 19 about legislation to create an independent, bipartisan commission to investigate the Jan. 6 attack on the United States Capitol Complex.

House Speaker Nancy Pelosi is ruling out a presidential commission to study the Jan. 6 insurrection at the Capitol, telling House Democrats on Tuesday that having President Joe Biden appoint a panel is unworkable even after the Senate blocked an independent probe last week.

Pelosi laid out possible next steps after Friday’s Senate vote, in which Senate Republicans blocked legislation to create an independent, bipartisan panel to investigate the siege by former President Donald Trump’s supporters. She proposed four options for an investigation of the attack, according to a person on the private Democratic caucus call who spoke on condition of anonymity to discuss internal conversations.

The first option, Pelosi said, is to give the Senate another chance to vote on the commission. Six Republicans voted with Democrats to move forward with the bill, and a seventh missed the vote but said he would have backed it. That means Democrats would only need support from three additional Republicans to reach the 60 votes needed for passage. The commission would be modeled after a highly respected panel that investigated the 9/11 terrorist attacks.

The other options involve the House investigating the attack, meaning the probes would be inherently partisan. Pelosi suggested that she could appoint a new select committee to investigate the siege or give the responsibility to a single committee, such as the House Homeland Security panel, which wrote the original bipartisan bill to create the commission. Alternately, Pelosi said committees could simply push ahead with their own investigations that are already underway.

But the speaker said she believed a commission appointed by Biden—an idea pitched by some in her caucus after Friday’s Senate vote—was “not a workable idea in this circumstance” because Congress would still need to approve money and subpoena authority for the panel.

Pelosi’s comments come as members of both parties have pushed for a deep dive into the insurrection, which was designed to interrupt the presidential electoral count and was the worst attack on Congress in two centuries. Four rioters died in the attack, including a woman who was shot by police as she tried to break into the House chamber while lawmakers were still inside. The rioters brutally beat police and broke in through windows and doors as they hunted for lawmakers and called for Trump’s defeat to be overturned.

The White House has not yet said whether Biden would try to appoint a commission without Congress. On Friday, White House deputy press secretary Karine Jean-Pierre told reporters that “the president has been clear that the shameful events of Jan. 6 need to be independently and fully investigated” and that he remains committed to that.

“We will continue to work with Congress to find a path forward to ensure that happens,” she said.

After the Senate vote, some Democrats urged Biden to move on his own.

“In light of the GOP’s cowardly filibuster of a bipartisan January 6th commission, I urge President Biden to form and appoint a Presidential Commission to fully investigate the insurrection at the United States Capitol, to identify the individuals and organizations who plotted or were involved in those violent acts, and to make recommendations to prevent such an attack from ever recurring,” said Virginia Rep. Gerry Connolly in a statement over the weekend.

It’s uncertain whether the Senate would hold another vote on the commission and whether any additional Republicans would support it. Senate Majority Leader Chuck Schumer, D-N.Y., left open the possibility of a second attempt, saying after the vote that “the events of Jan. 6 will be investigated.”

Senate Minority Leader Mitch McConnell, R-Ky., opposes the commission, saying he believes the panel would be partisan even though it would be divided evenly between the two parties. McConnell’s criticism came after Trump opposed it and called the legislation a “Democrat trap.”

Still, six in McConnell’s caucus defied him, arguing that an independent look was needed, and Pennsylvania’s Pat Toomey would have brought the total to seven but for a family commitment, his office said. The Republicans who voted to move forward on the bill were Sens. Bill Cassidy of Louisiana, Lisa Murkowski of Alaska, Susan Collins of Maine, Ben Sasse of Nebraska, Rob Portman of Ohio and Mitt Romney of Utah.

The House passed the bill in May, with 35 Republicans voting with Democrats to pass it. 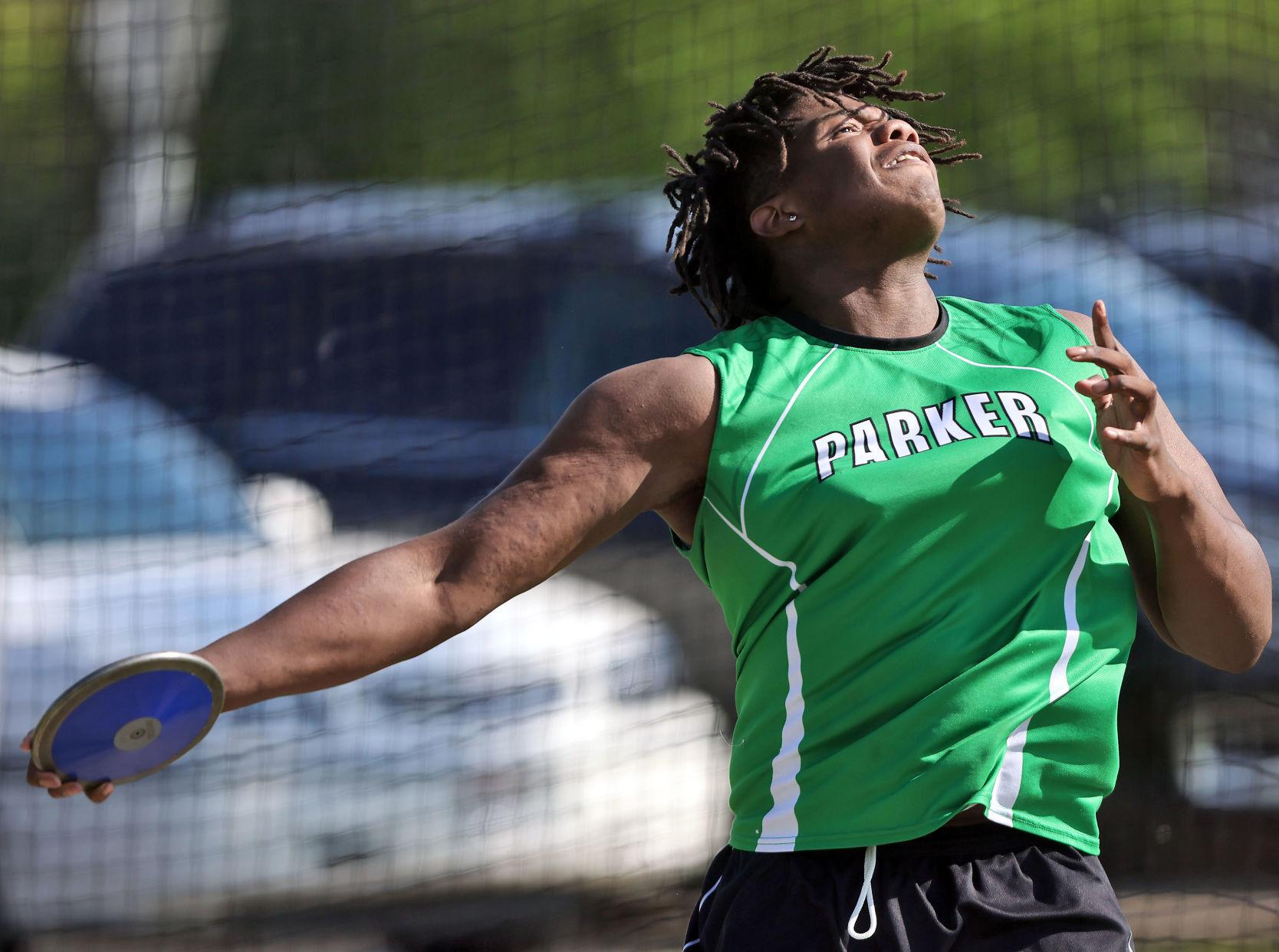 Janesville Parker’s Abiathar Curry competes in the discus during their home meet against Sun Prairie on Tuesday.

Obituaries and death notices for June 2, 2021

Wisconsin Gov. Tony Evers, at the podium, said he's not ruling out vetoing the entire state budget on Tuesday, June 1, 2021, in Madison, Wis. Evers spoke after a ceremony to raise the rainbow gay pride flag outside the state Capitol in recognition of gay pride month in June in Madison. (AP Photo Scott Bauer)

Democratic Gov. Tony Evers refused to rule out the possibility of vetoing the entire state budget that is currently being written by a Republican-controlled legislative committee, saying Tuesday that it was too early to say whether he would do that.

Evers was asked whether he was considering a veto after Republicans agreed to spend less than 10% of what he proposed on K-12 schools. Evers called that funding level an “insult to the kids of our state” and said a veto of the entire budget was “on the table.”

Evers also said “in some instances it is a reasonable request” for businesses, health care institutions and universities to require proof of vaccination for the COVID-19 virus.

Evers has already vetoed a bill that would have prohibited health officials from mandating the vaccine.

On the budget, Evers said he hoped the Legislature would put more money toward K-12 schools.

The Legislature’s Joint Finance Committee last week approved spending less than $150 million more on K-12 schools, which was less than 10% of what Evers requested. Republicans defended the move, noting that Wisconsin is set to receive $2.6 billion in federal coronavirus stimulus money for education.

However, the level of new funding does not meet federal match requirements, putting $1.5 billion of coronavirus relief funds in jeopardy. Republican co-chairs of the budget committee, Rep. Mark Born and Sen. Howard Marklein, said last week they were aware the funding level might not meet federal requirements.

Marklein declined to comment Tuesday, and Born did not immediately return a message.

Evers also defended allowing unemployed people to receive $300 more a week in benefits approved by Congress during the pandemic. He questioned arguments made by Republicans who want to end that and other federal unemployment benefits who say they are worsening the state’s worker shortage problem.

Evers, along with U.S. Sen. Tammy Baldwin, said they hadn’t seen data to back that up and employers had been short of workers long before the pandemic hit.

Evers commented after a ceremony outside the state Capitol where the rainbow flag symbolizing gay pride was raised for the third straight year. June is gay pride month and Evers was the first governor in Wisconsin history to order the pride flag to be flown when he did it in 2019.

Evers said that was a preventive measure and he wasn’t aware of any state money being used currently on the practice.

Evers also strongly signaled that he would veto Republican-authored bills making their way through the Legislature that would prohibit transgender girls from playing for girls or women’s teams from kindergarten through college.

“I will veto any bill that’s going to negatively impact our kids, period,” Evers said. He said that “hateful and divisive rhetoric” on display in the Capitol has no place in Wisconsin.

He was joined outside for the flag raising ceremony by Baldwin, who is gay, along with several gay and lesbian members of the state Legislature, and Lt. Gov. Mandela Barnes and several members of his Cabinet. 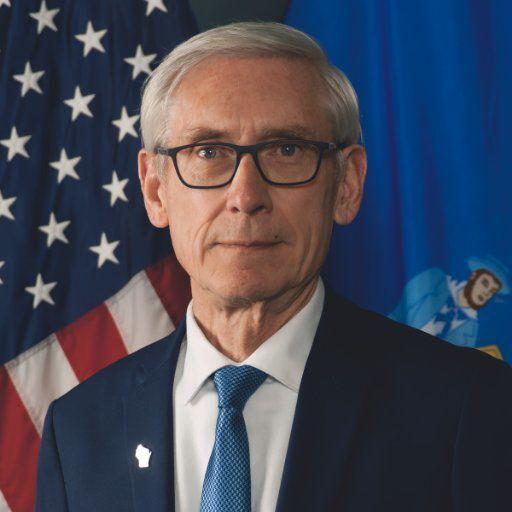