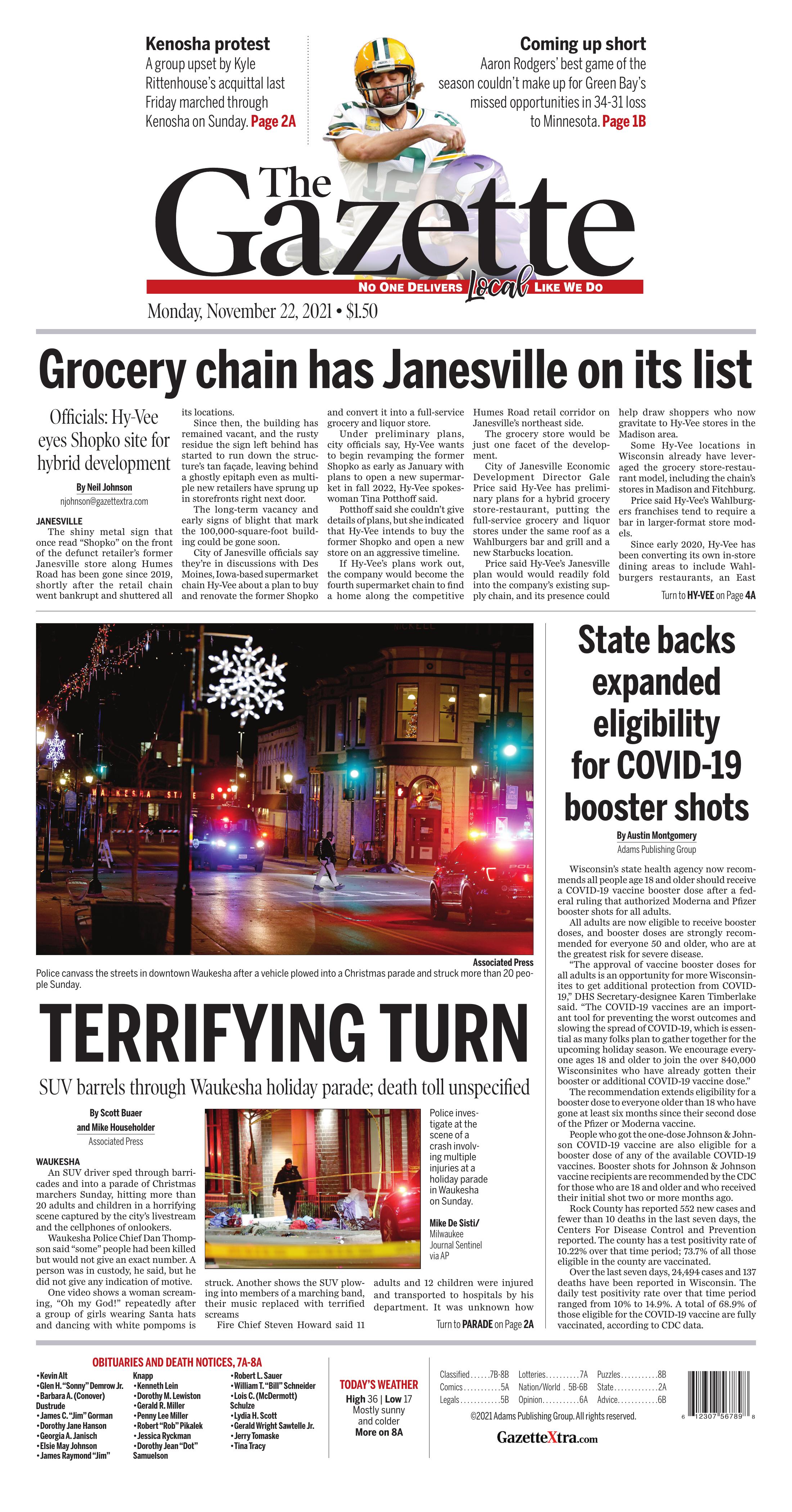 The shiny metal sign that once read “Shopko” on the front of the defunct retailer’s former Janesville store along Humes Road has been gone since 2019, shortly after the retail chain went bankrupt and shuttered all its locations.

Since then, the building has remained vacant, and the rusty residue the sign left behind has started to run down the structure’s tan façade, leaving behind a ghostly epitaph even as multiple new retailers have sprung up in storefronts right next door.

The long-term vacancy and early signs of blight that mark the 100,000-square-foot building could be gone soon.

City of Janesville officials say they’re in discussions with Des Moines, Iowa-based supermarket chain Hy-Vee about a plan to buy and renovate the former Shopko and convert it into a full-service grocery and liquor store.

Potthoff said she couldn’t give details of plans, but she indicated that Hy-Vee intends to buy the former Shopko and open a new store on an aggressive timeline.

If Hy-Vee’s plans work out, the company would become the fourth supermarket chain to find a home along the competitive Humes Road retail corridor on Janesville’s northeast side.

The grocery store would be just one facet of the development.

City of Janesville Economic Development Director Gale Price said Hy-Vee has preliminary plans for a hybrid grocery store-restaurant, putting the full-service grocery and liquor stores under the same roof as a Wahlburgers bar and grill and a new Starbucks location.

Price said Hy-Vee’s Janesville plan would would readily fold into the company’s existing supply chain, and its presence could help draw shoppers who now gravitate to Hy-Vee stores in the Madison area.

Some Hy-Vee locations in Wisconsin already have leveraged the grocery store-restaurant model, including the chain’s stores in Madison and Fitchburg.

Since early 2020, Hy-Vee has been converting its own in-store dining areas to include Wahlburgers restaurants, an East Coast chain that serves burgers and American-style comfort foods and offers beer, wine and mixed drinks at a full-service bar.

Such a development would compete with existing supermarkets in the area—Woodman’s, Festival Foods—and restaurants—Red Robin and Hacienda Real, to name two—along the same spur.

“Hy-Vee would need us to change our city liquor ordinance to allow intoxicating liquor sales in a bar and restaurant that’s inside the grocery,” Price said.

In recent months, Janesville city council members have been split on the issue of expanding liquor sales. One Kwik Trip proposal on the east side ran into snags earlier this year when some council members balked plans for a liquor store.

Opponents on the council said they’re leery of oversaturating the local market with alcohol sellers.

The former Shopko space has been vacant since 2019, despite multiple retail revitalization projects at an adjoining strip mall to the east.

Price said this is the first time the property has drawn interest from a supermarket. The city has not made preliminary plans for the Hy-Vee project available to the public. It’s not clear whether the project might involve subdividing part of a large parking lot with retail outlots as a local developer did when the former Kmart parcel at Milton Avenue was redeveloped as a Festival Foods.

Hy-Vee has been buying up former Shopko locations in small markets in Iowa since 2020, according to company information.

Janesville’s former Shopko is within a half-mile of a city tax increment financing district the city established in 2017 to spur redevelopment of a blighted former Menards property just to the east.

The owner who worked with the city to transform that location into a multistore retail center also owns a strip mall located next to Shopko. That property now houses an Ashley HomeStore furniture store and a Harbor Freight tool and hardware store.

The redevelopment of those properties came in 2018 and 2019, and they have operated adjacent gaping Shopko vacancy to the west.

Price said the city at this point is not considering any tax incentive packages connected to Hy-Vee’s proposal. He said under current city policies, vacant commercial properties aren’t eligible for tax incentives such as TIF agreements until they have been vacant for five years.

“It’s just general philosophy that we want to see the market reuse real estate without us intervening if we don’t have to,” Price said.

Police investigate at the scene of a crash involving multiple people and injuries at a holiday parade in Waukesha, Wis., on Sunday, Nov. 21, 2021. (Mike De Sisti/Milwaukee Journal-Sentinel via AP)

Police investigate at the scene of a crash involving multiple people and injuries at a holiday parade in Waukesha, Wis., on Sunday, Nov. 21, 2021. (Mike De Sisti/Milwaukee Journal-Sentinel via AP)

An SUV driver sped through barricades and into a parade of Christmas marchers Sunday, hitting more than 20 adults and children in a horrifying scene captured by the city’s livestream and the cellphones of onlookers.

Waukesha Police Chief Dan Thompson said “some” people had been killed but would not give an exact number. A person was in custody, he said, but he did not give any indication of motive.

One video shows a woman screaming, “Oh my God!” repeatedly after a group of girls wearing Santa hats and dancing with white pompoms is struck. Another shows the SUV plowing into members of a marching band, their music replaced with terrified screams

Fire Chief Steven Howard said 11 adults and 12 children were injured and transported to hospitals by his department. It was unknown how many others injured were taken to hospitals by others.

Police also had custody of the vehicle, Thompson said. The investigation was ongoing, with assistance from the Wisconsin Department of Justice.

“What took place in Waukesha today is sickening, and I have every confidence that those responsible will be brought to justice,” tweeted the state’s top law enforcement officer, Attorney General Josh Kaul.

As the SUV broke through barricades, a Waukesha police officer fired his gun in an attempt to stop the vehicle, Thompson said. No bystanders were injured and Thompson said he did not know if the driver was struck by the officer’s bullets.

One video shows the moment the SUV broke through the barricades and the sound of what appears to be several gunshots.

The video taken when the pompom dancers got struck ends with a group of people tending to one of the girls who is on the ground.

Corey Montiho, a Waukesha school district board member, told the Milwaukee Journal Sentinel that his daughter’s dance team was hit by the SUV.

“They were pompoms and shoes and spilled hot chocolate everywhere. I had to go from one crumpled body to the other to find my daughter,” he said. “My wife and two daughters were almost hit. Please pray for everybody. Please pray.”

One entry in the parade, the Milwaukee Dancing Grannies, posted on its Facebook page that “members of the group and volunteers were impacted and we are waiting for word on their conditions.” The group’s profile describes them as a “group of grannies that meet once a week to practice routines for summer and winter parades.”

Chris Germain, co-owner of the Aspire Dance Center studio, had about 70 girls in the parade ranging from as young as 2 being pulled in wagons to age 18. Germain, whose own 3-year-old daughter was in the parade, said he was driving at the head of their entry when he saw a maroon SUV that “just blazed right past us.” A police officer came by on foot chasing after, he said. Germain said he jumped out of his own SUV and gathered the girls who were with him.

“There were small children laying all over the road, there were police officers and EMTs doing CPR on multiple members of the parade,” he said.

Angelito Tenorio, a West Allis alderman who is running for Wisconsin state treasurer, said he was watching the parade with his family when they saw the SUV come speeding into the area.

“Then we heard a loud bang,” Tenorio said. “And after that, we just heard deafening cries and screams from the crowd, from the people at the parade. And people started rushing, running away with tears in their eyes crying.”

The Waukesha school district canceled classes Monday and said in a notice on its website that extra counselors would be on hand for students and staff. The parade’s list of entries included cheer, dance and band entries associated with district schools.

Gov. Tony Evers said he and his wife, Kathy, were “praying for Waukesha tonight and all the kids, families, and community members affected by this senseless act.”

Waukesha County Executive Paul Farrow, who was at the parade but left just before the incident, called it “an unspeakable tragedy, affecting us all as we work to overcome an extremely challenging two years and resume our cherished holiday traditions.”

The parade is sponsored by the city’s Chamber of Commerce. This year’s edition was the 59th of the event that’s held each year the Sunday before Thanksgiving.

Wisconsin’s state health agency now recommends all people age 18 and older should receive a COVID-19 vaccine booster dose after a federal ruling that authorized Moderna and Pfizer booster shots for all adults.

All adults are now eligible to receive booster doses, and booster doses are strongly recommended for everyone 50 and older, who are at the greatest risk for severe disease.

“The approval of vaccine booster doses for all adults is an opportunity for more Wisconsinites to get additional protection from COVID-19,” DHS Secretary-designee Karen Timberlake said. “The COVID-19 vaccines are an important tool for preventing the worst outcomes and slowing the spread of COVID-19, which is essential as many folks plan to gather together for the upcoming holiday season. We encourage everyone ages 18 and older to join the over 840,000 Wisconsinites who have already gotten their booster or additional COVID-19 vaccine dose.”

The recommendation extends eligibility for a booster dose to everyone older than 18 who have gone at least six months since their second dose of the Pfizer or Moderna vaccine.

Rock County has reported 552 new cases and fewer than 10 deaths in the last seven days, the Centers For Disease Control and Prevention reported. The county has a test positivity rate of 10.22% over that time period; 73.7% of all those eligible in the county are vaccinated.

Over the last seven days, 24,494 cases and 137 deaths have been reported in Wisconsin. The daily test positivity rate over that time period ranged from 10% to 14.9%. A total of 68.9% of those eligible for the COVID-19 vaccine are fully vaccinated, according to CDC data.